Fig. 1 - COP-DEM - Most of the Iranian geography is made of endorheic basins with low rainfall.
2D view 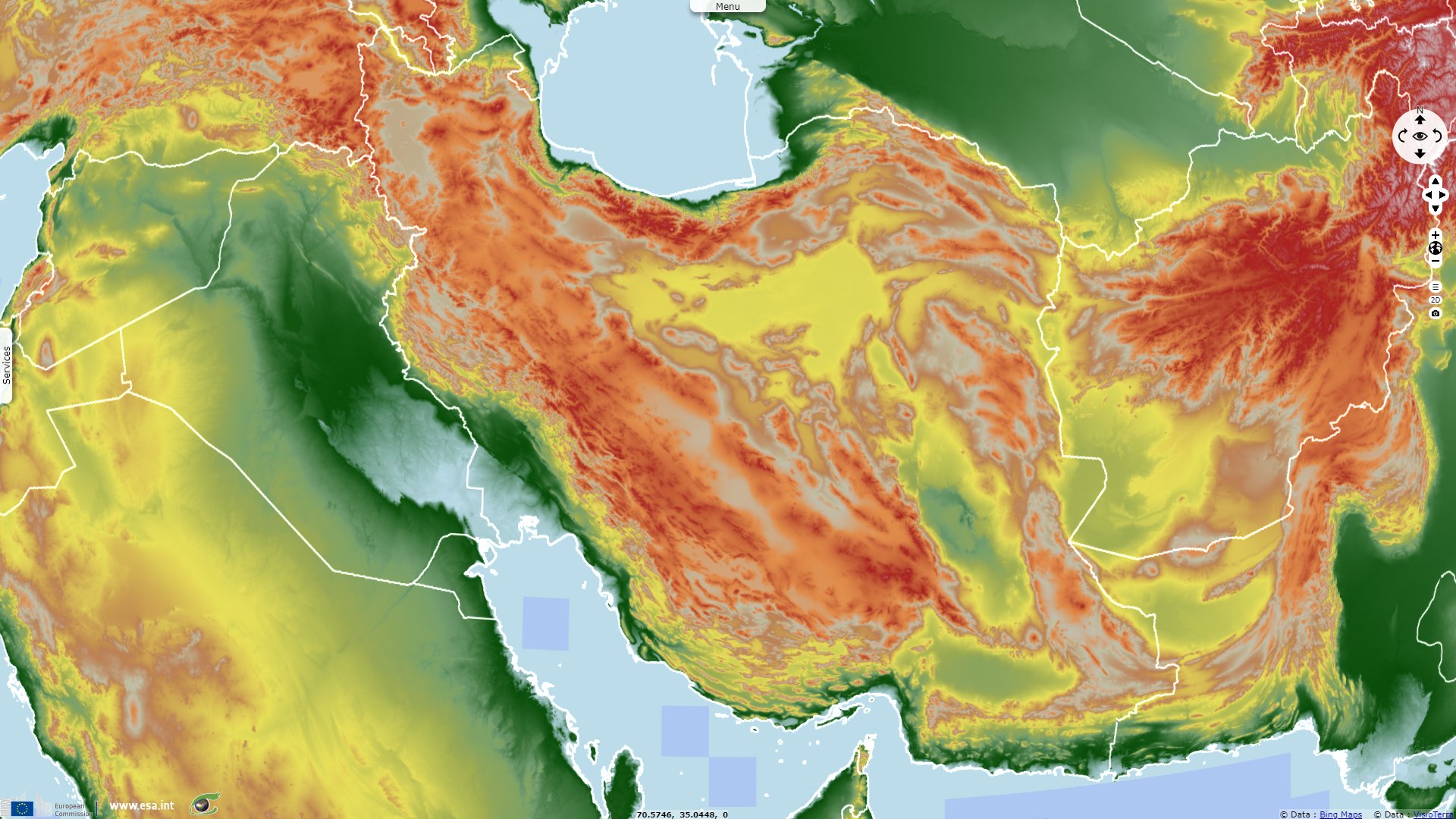 During a 2013 debate on the status of Lake Urmia, the host of this program said: "After the revolution and from 1979 to 2011, the area under agricultural cultivation increased from 158 000 hectares to 450 000 hectares. The area under agricultural cultivation now reaches 680 000 hectares, four times as much as before the revolution, where each hectare requires an average of 10 000 cubic meters of water, which means that we have taken 4 to 5 billion cubic meters of water to the agricultural sector.". The deputy of the natural environment of the Iranian Environmental Protection Organization added: "We have statistics that agricultural production has increased, but at what cost!"
Fig. 2 - S3 SLSTR (25 & 27.08.2022) - It encompasses many fragile lakes facing low input and high evaporation.
3D view 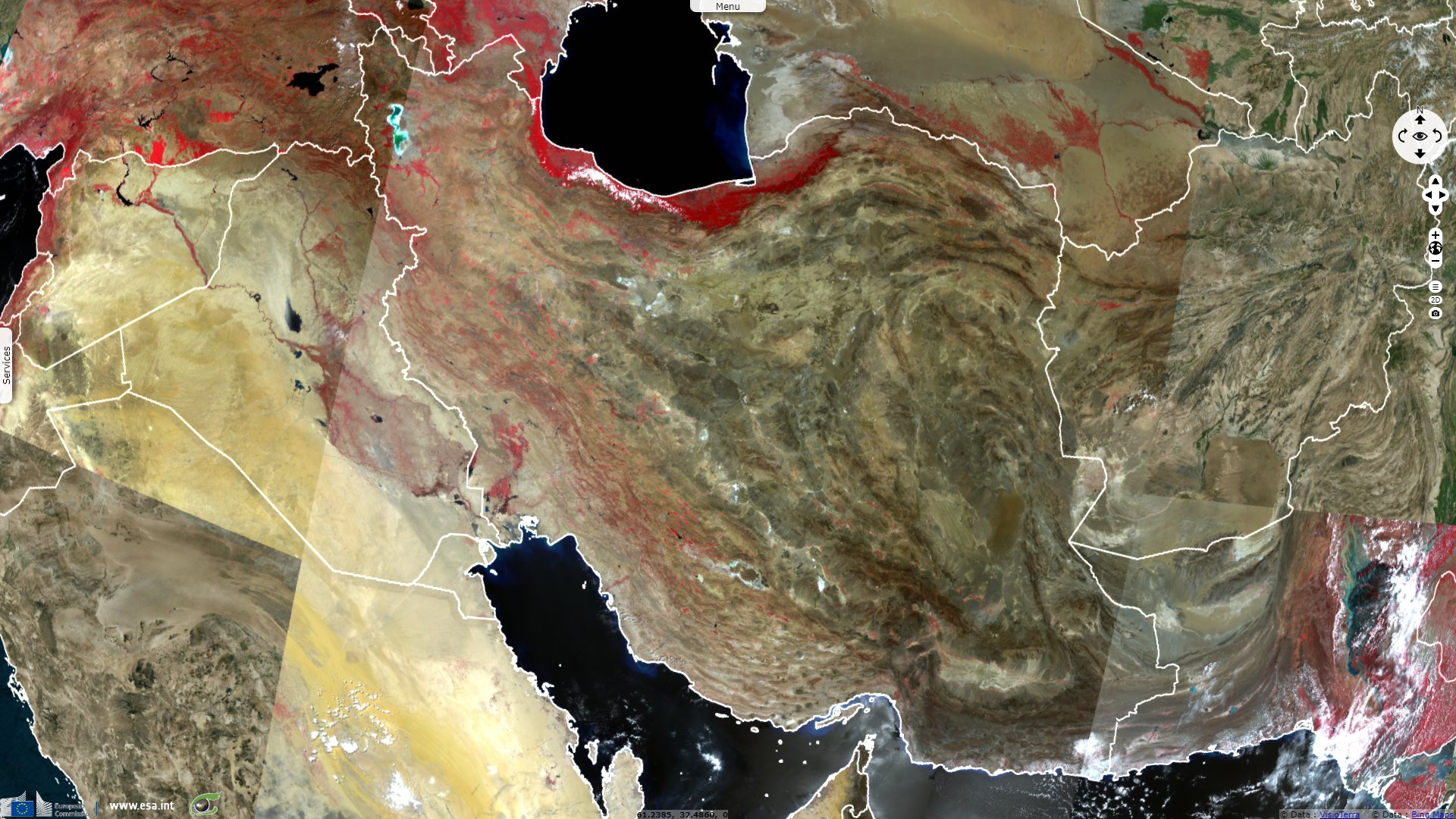 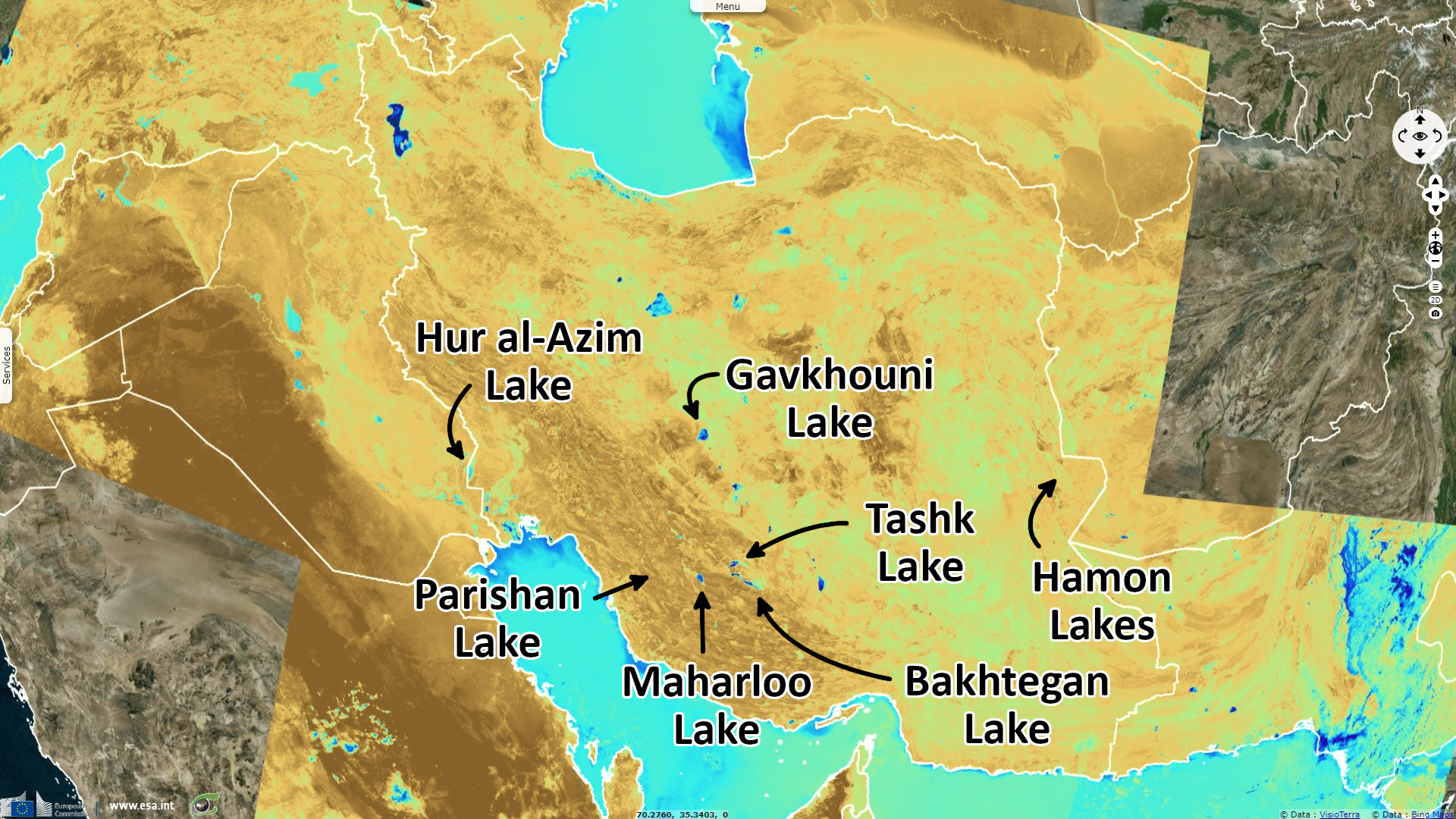 While the power blamed the drought and the climate change, other pointed the responsibility of thousands of unauthorized wells as well as that of dams added on the river inputs. The Ministry of Agriculture Jihad stated: "Before 2009, 250 000 of land in West Azerbaijan province were under pressure, and now this figure has increased to 500 000 hectares. He reminded: In 1996, West Azerbaijan province had a population of over 7000 000 people, but in 2013 this number has reached 3 025 000 people, and the main activity of the citizens of this region is agricultural activities."
Fig. 4 - L5 (19.08.1986) / S2 (23.08.2022) - Hur al-Azim Lake is a large marsh between Iraq (west) and Iran (east).
3D view 3D view 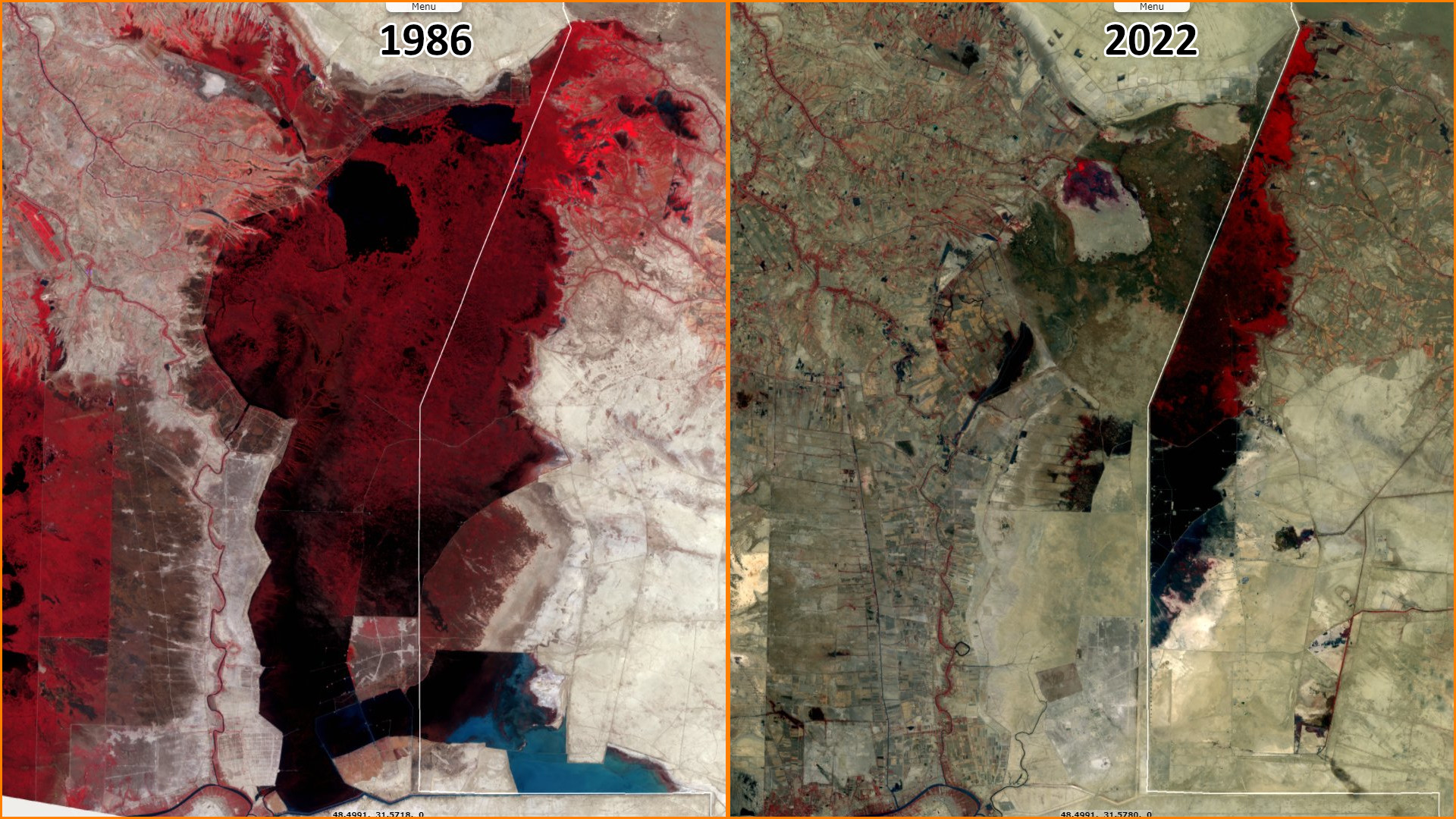 Reporting the disappearance of Hamon Lake, the Iranian news agency wrote: "The gradual death of lakes and wetlands has now become a serious issue in the country and the disappearance of Hamon, Kaftar, Bakhtegan, Maharlo, Tashk and some other wetlands from the map of Iran, as well as the location of Urmia Lake in The threshold of complete destruction also opened the parliament to the crisis of drying up the lakes. Officials say that the destructive effects of the environment and the occurrence of salt and dust storms and the loss of agriculture are among the most important harmful effects of the drying up of the country's lakes."
Fig. 5 - L5 (19.08.1986) / S2 (23.08.2022) - The Iranian side has been reduced to a fraction of its original size, the Iraqi part even worse.
3D view 3D view 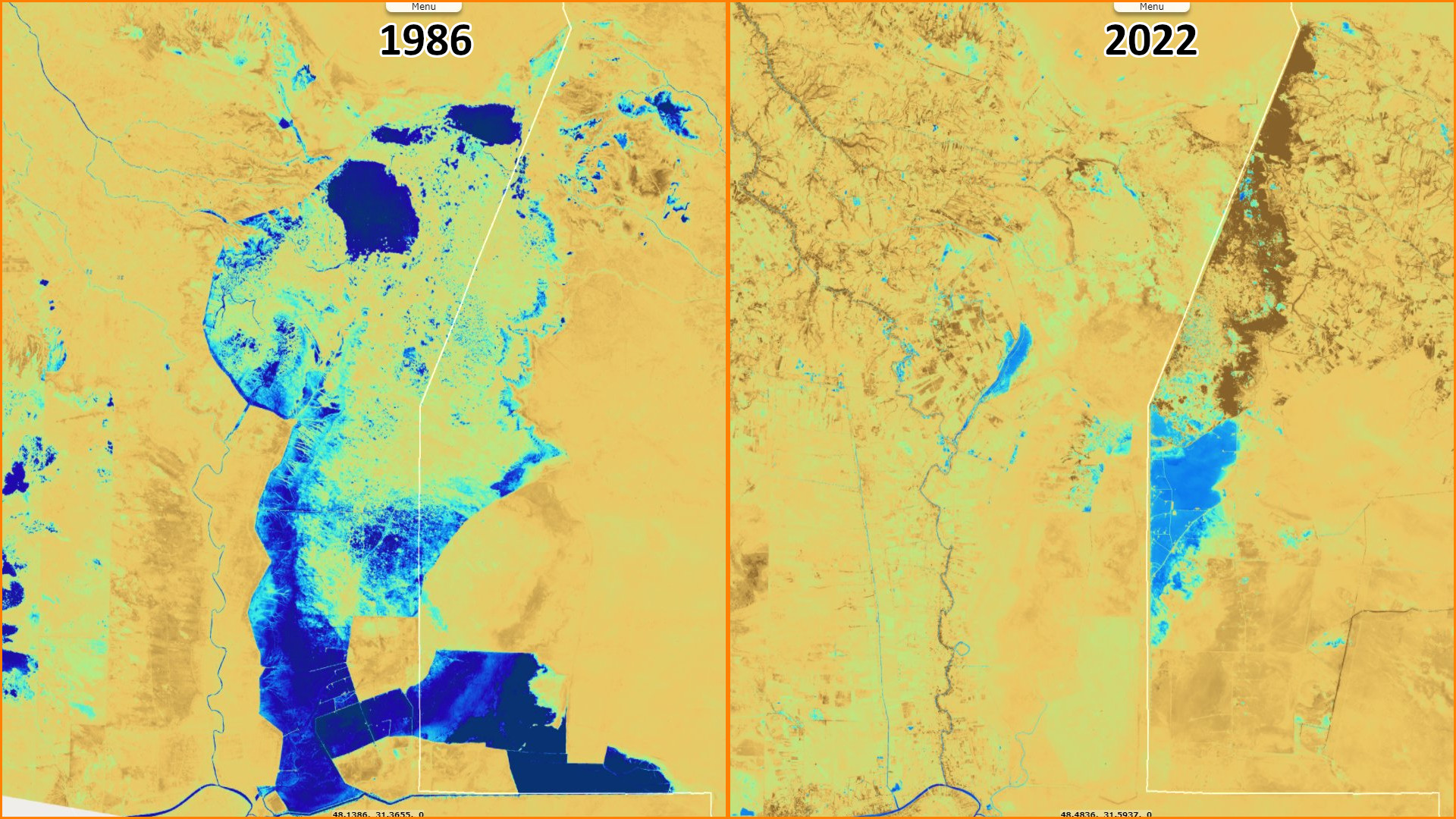 "Hamon Lake is the third largest lake in Iran after Caspian Lake and Urmia Lake. This lake is made up of 3 small lakes that connect when there is plenty of water and form Hamon Lake as the largest freshwater area in Sistan. In the Sistan plain, there are a series of depressions and natural holes that turn into lakes, marshes, and nizars in different months and are divided into 3 parts: Saburi, Pozak, and Hamon."
Fig. 6 - L5 (23.08.1987) / S2 (25.08.2022) - Hamon Lakes were once a large single lake across Iran and Pakistan.
3D view 3D view 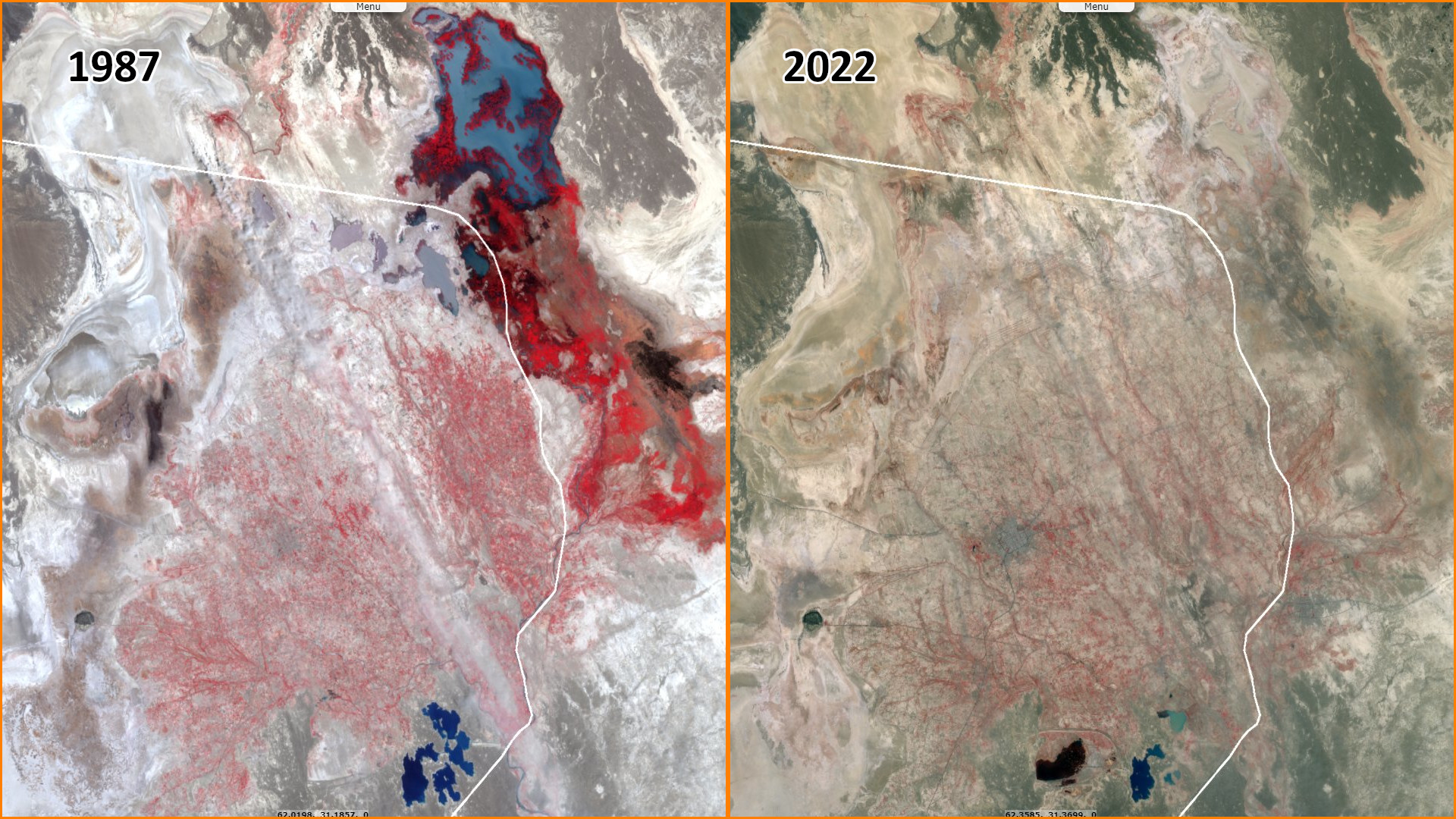 "The total area of ​​Hamons during high water is 5660 km², of which 3820 km² belong to Iran. Having said that, Hamon Lake is dependent on the Hirmand River, and this dependency has caused any fluctuations in its water level to cause problems for the entire system. Due to the 15-year droughts and the closure of the incoming water from the Afghan side and non-payment of the lake fee by the Afghan side, Lake Hamon is now completely dry and no traces of life can be found in it."
Fig. 7 - L5 (23.08.1987) / S2 (25.08.2022) - Hamons became several small lakes, reduced to ponds in the summer.
3D view 3D view 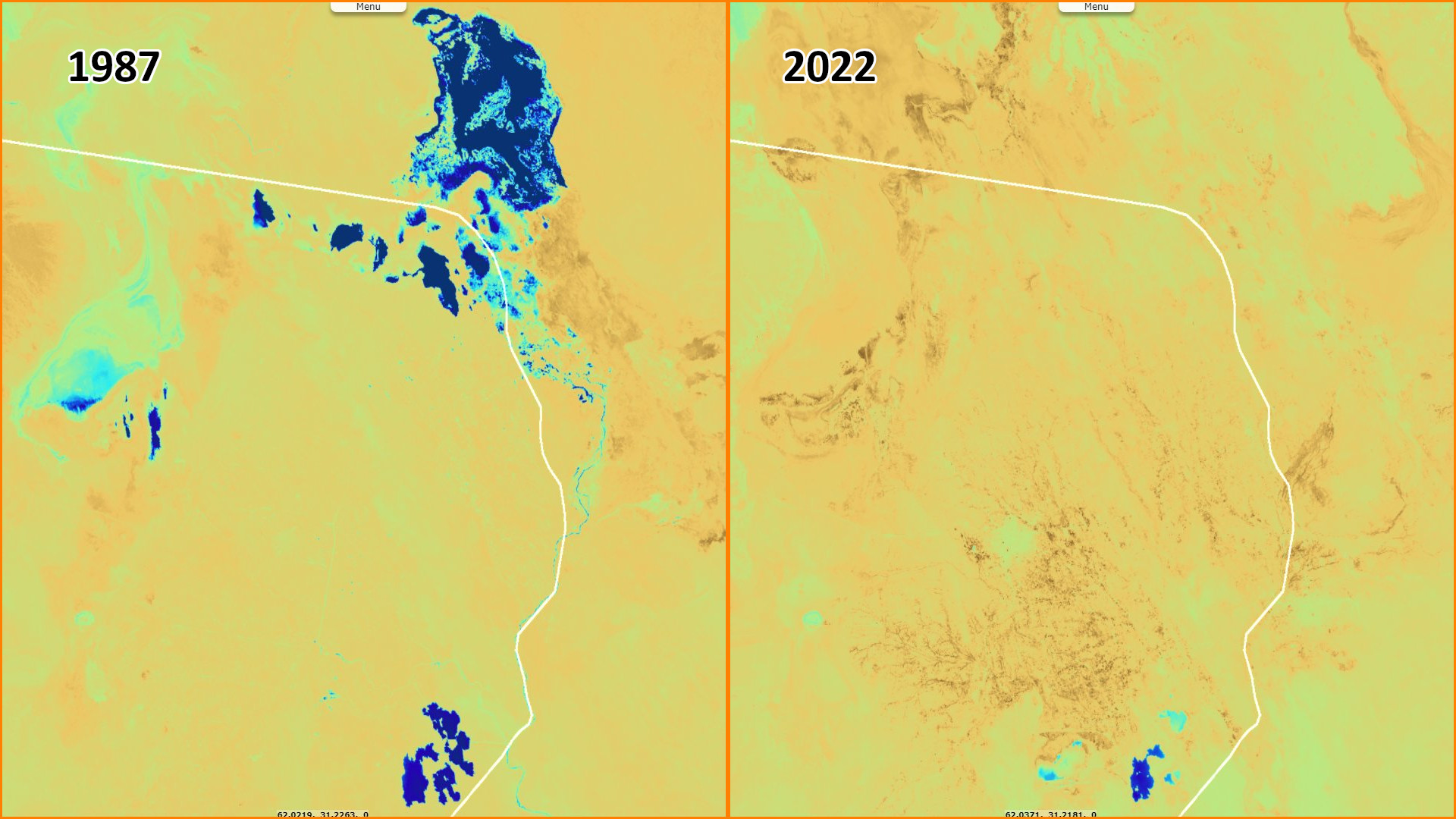 "The importance of this lake is that Hamon is the seventh international wetland in the world and the largest freshwater lake in the country, which has been almost forever erased from the country's geographical map. A lake that hosted more than 1 million migratory birds every year until less than two decades ago. With the destruction of Hamon, 15 000 fishermen became unemployed, and the women who were engaged in the production of handicrafts using the reeds of the lake have lost their source of income. Sistani herdsmen migrated with 120 000 head of cattle that were grazing on 70 000 hectares of the lake land." "Currently, the provinces of Sistan and Baluchistan, West Azerbaïdjan, Fars and Isfahan have more serious problems with water issues and the drying up of wetlands and lakes."
Fig. 8 - L5 (14.08.1986) / S2 (27.08.2022) - The salt crust visible in 1986 decreased in surface afterwards, possibly blown away by a storm.
2D view 2D view 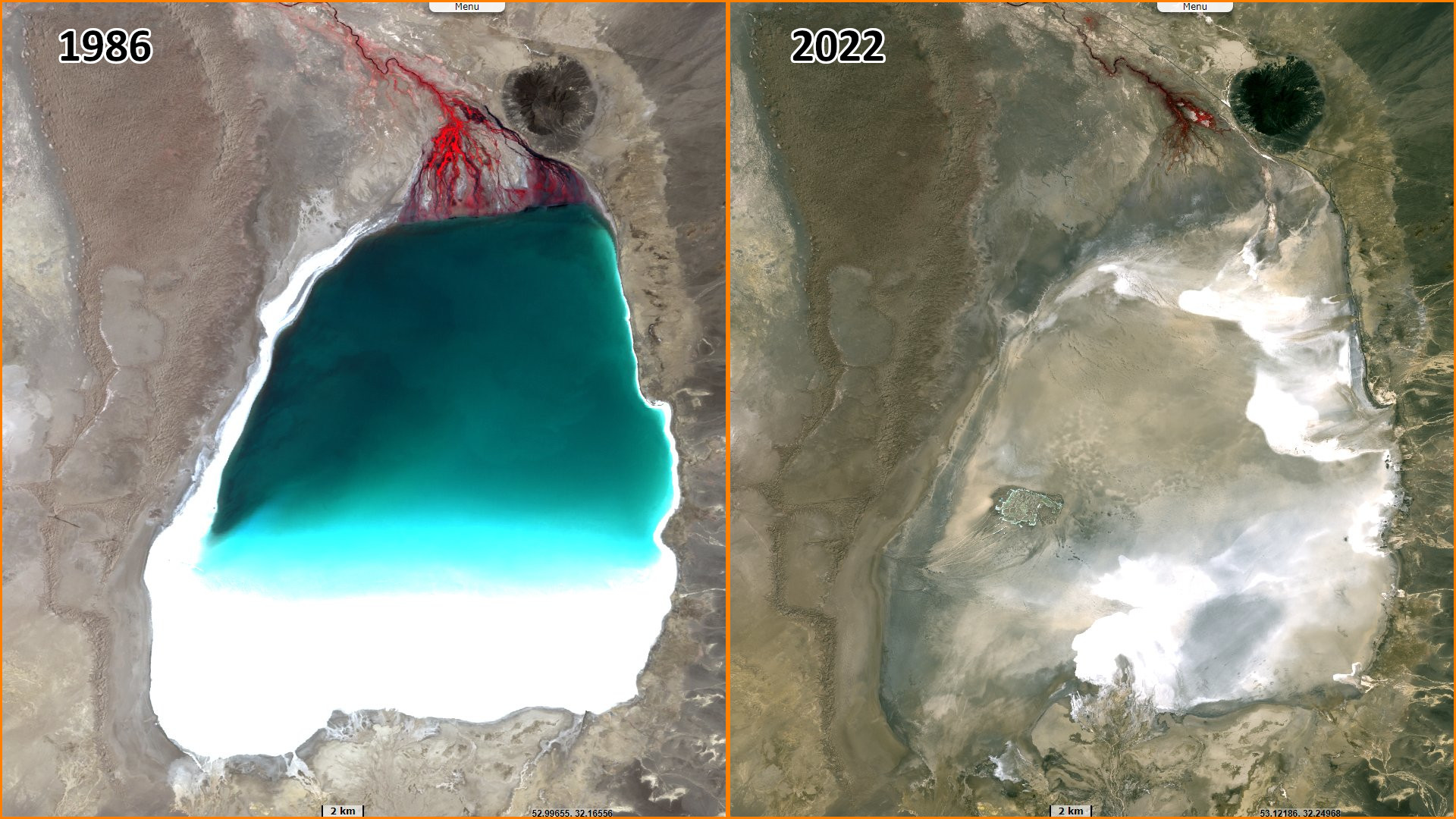 Regarding the near total drying of Lake Urmia, covered in a previous story, the Iranian news agency reported explanations and foreseen solutions about the issue that affects many Iranian lakes: "In recent years, some experts on water issues have criticized the construction of numerous dams along the rivers leading to Lake Urmia." "There were some discussions about transferring water from other areas, transferring water from the Aras border river and also the Caspian Sea to Lake Urmia. Transferring the water of the rivers affecting Lake Urmia, dredging, changing the way farmers use water and using methods other than submerged cultivation and issues of this kind were proposed as solutions to control the dryness of Lake Urmia."
Fig. 9 - L5 (14.08.1986) / S2 (27.08.2022) - Gavkhouni Lake had already lost some of its surface in 1986, no water cover remains in August 2022.
2D view 2D view 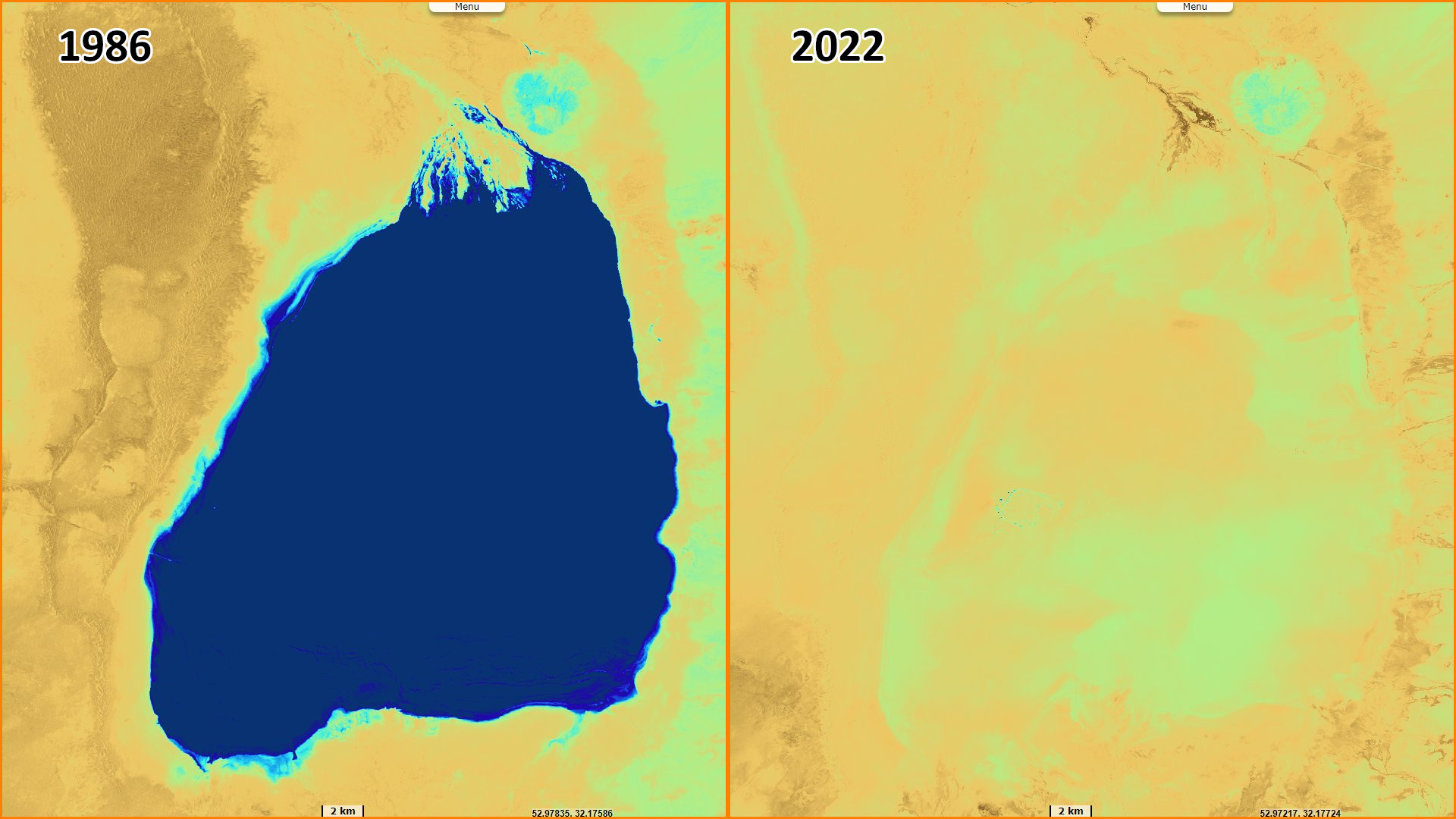 "Also, Bakhtegan and Maharlu lakes in Fars province have completely dried up today due to lack of attention and no preventive measures have been taken, leaving only a memory of them in the minds of the people of Fars province." "It is also reported that two other lakes, Tashk and Kafter, have been destroyed in Fars province, and a significant part of the water storage of these two lakes has also been destroyed. Morteza Eftekhari announced the research carried out by the Water Research Institute on the dryness of the lakes located in Fars province and said: based on the results obtained from the present research, about 117 thousand hectares of the water areas of this basin (including Tashk, Bakhtegan, Maharlo lakes) and Kaftar Lake) has been destroyed during the last 26 years and turned into dust-prone salt flats."
Fig. 10 - L5 (03 & 26.08.1987) / S2 (24.08.2022) - Tashk Lake (north) & Bakhtegan Lake (south) are some of the largest lakes in SW Iran.
3D view 3D view 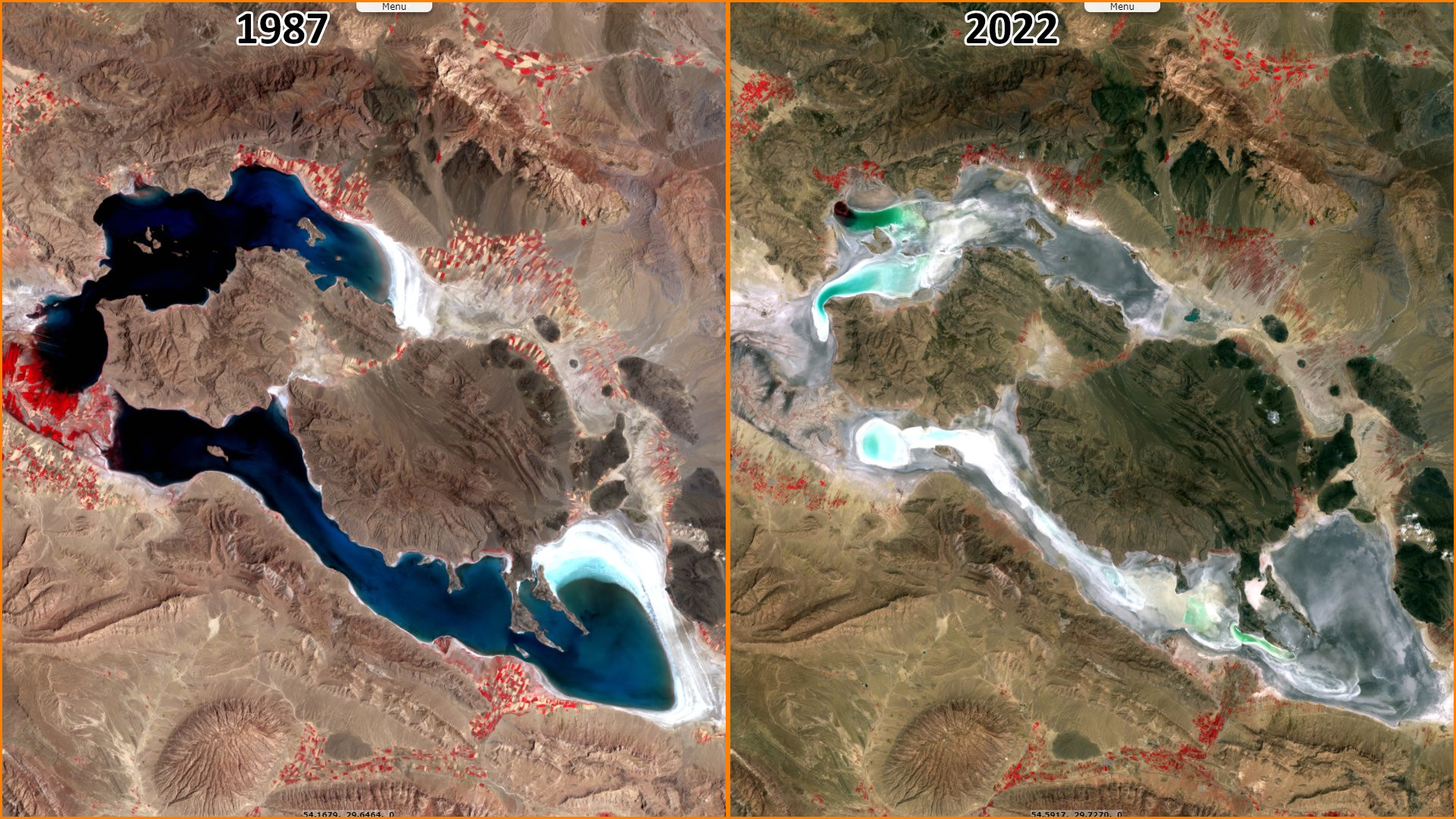 "The head of the Water Resources Research Institute of the Water Research Institute also announced the extraction of the desertification process of the Bakhtegan watershed during the past 26 years using satellite images and about the criticisms raised about the impact of dam constructions on the dry land of some lakes in Fars province. He emphasized: Based on this, the Water Research Institute, considering its research mission in the field of investigating the causes of some water challenges in the country, has put the study of the occurrence of desertification in this basin as the first step in this field." "Eftekhari further pointed to the necessity of using satellite data and images as one of the useful, accurate and low-cost tools and stated: Desertification map of Bakhtegan watershed in two time periods of 1987 and 2013 using Landsat satellite images. has been extracted."
Fig. 11 - L5 (03 & 26.08.1987) / S2 (24.08.2022) - Bakhtegan Lake has completely dried up on this image, Tashk Lake has been greatly reduced.
3D view 3D view 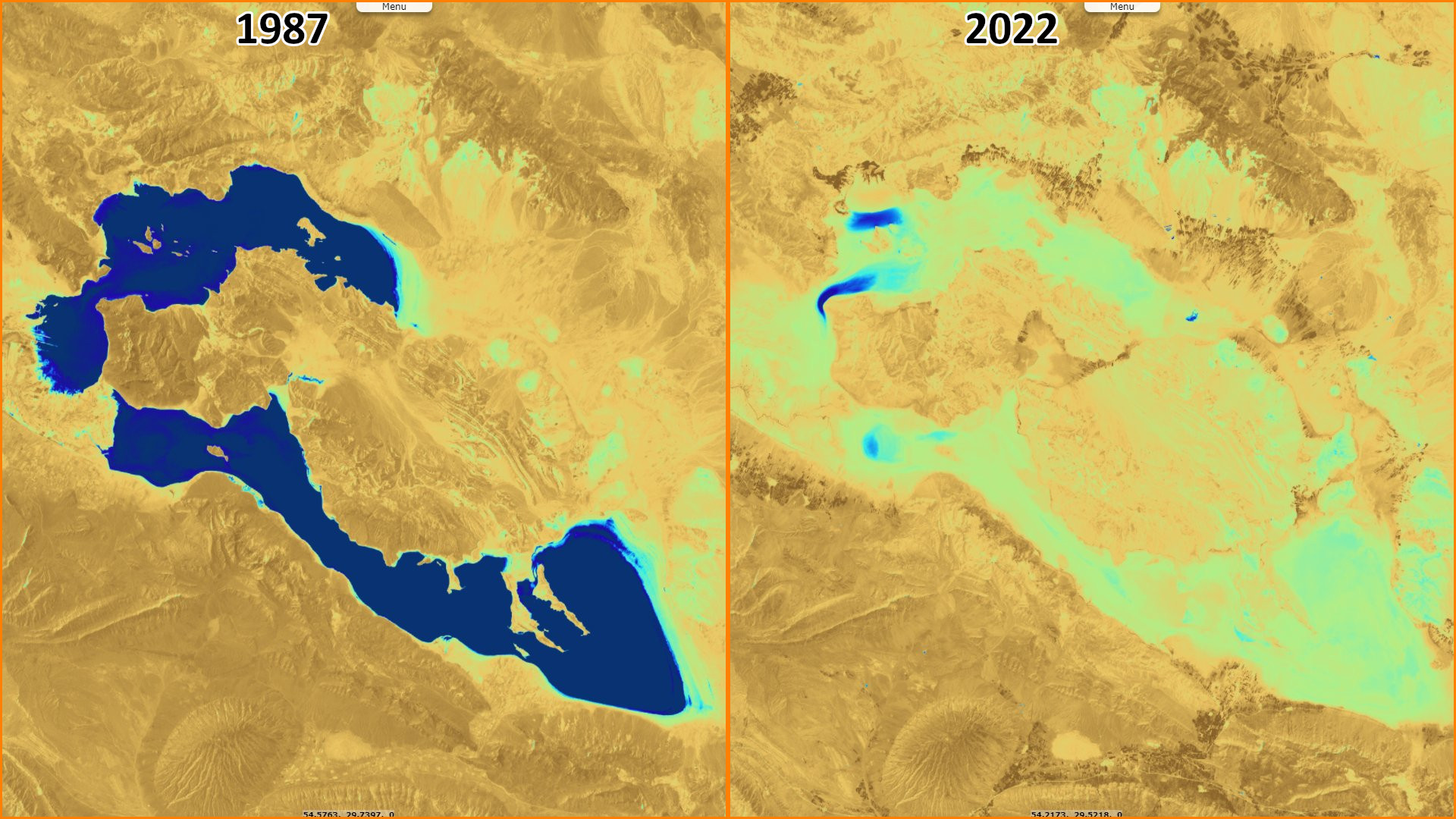 "Also Nematullah Karimi, the main expert of this project also pointed to the criticality of the situation of this watershed in terms of desertification and said: In addition, about 45 thousand hectares of lands in this basin have suffered desertification with high intensity and about 23 thousand hectares of lands in this basin have also suffered desertification with low intensity. Karimi stated that in the mentioned research, in addition to the study of desertification, the trend of monthly changes of fine dust in the atmosphere of the Bakhtegan watershed has also been studied, stating: In this regard, from the MODIS satellite data and the optical depth index of dust particles (Aerosol) Optical Depth) was used between 2001 and 2012." "Karimi added: Based on the results obtained during the last 11 years, the amount of suspended particles in the sky of this catchment area has increased by about 12%, and this trend will continue in the coming years due to the drying up of the lakes of this catchment area and their transformation into dust sources will probably increase in speed, and this issue requires the attention and diligence of the relevant authorities as much as possible."
Fig. 12 - L5 (26.08.1987) / S2 (27.08.2022) - Maharloo Lake dried up as the city of Shiraz and nearby cropland have expanded.
2D view 2D view 2D view 2D view 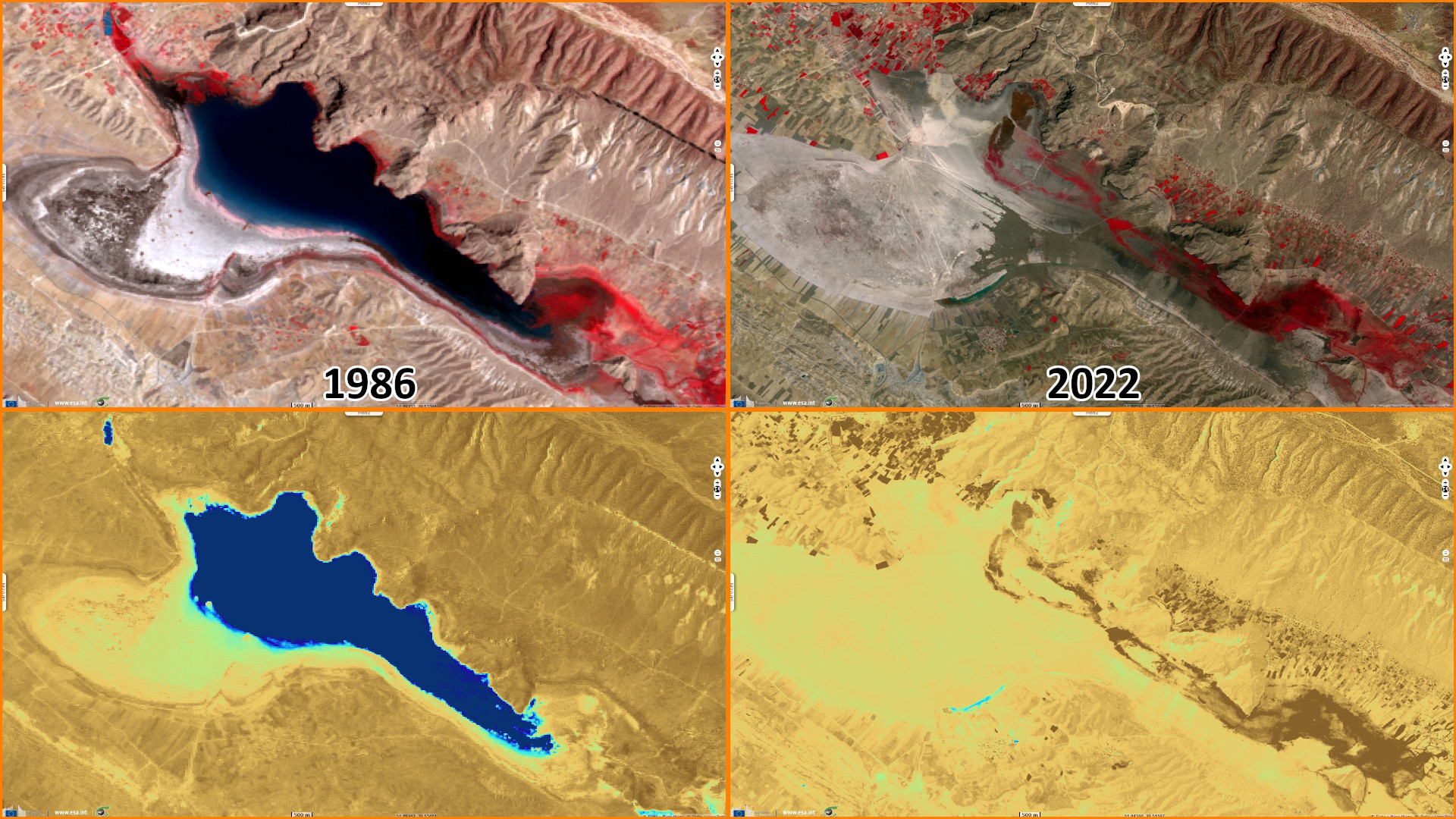