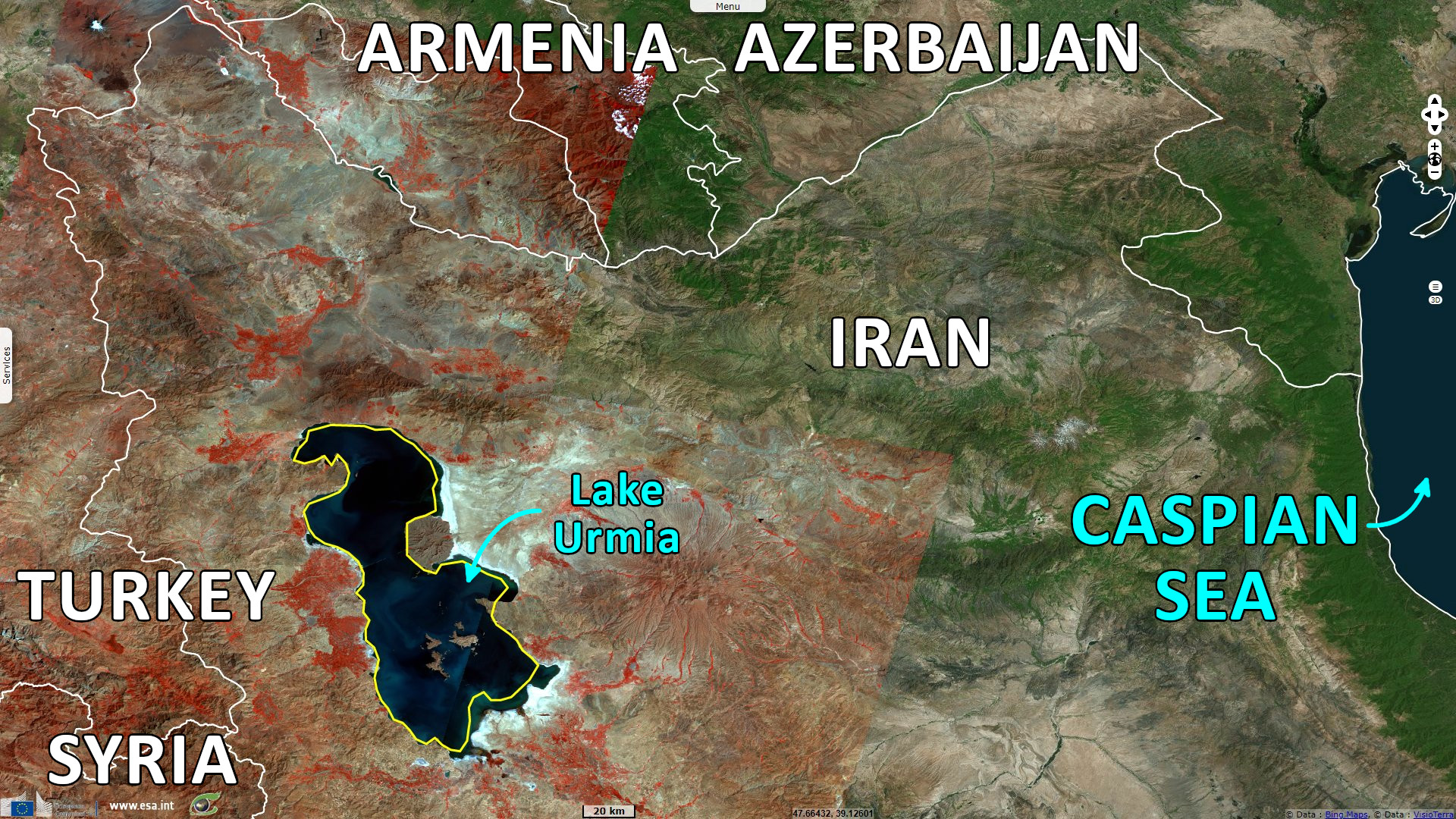 Urmia Lake is a large oligotrophic and extremely hypersaline lake located in Iran. It is described by Encyclopædia Britannica in the following words: "The lake lies in the bottom of the large central depression of the Azerbaijan region in northwestern Iran, at an elevation of 1275 m above sea level. The basin is surrounded by mountains in the west and north, by plateaus in the south, and by plateaus and volcanic cones in the east. The lake is about 140 km long and 40 to 55 km wide, with a maximum depth of 16 m. In its southern portion there is a cluster of about 50 tiny islands. The shoreline varies with the lake level; when the water is high, it extends into large salt marshes to the east and south. The governing factor of Lake Urmia’s hydrography is its lack of an outlet. It forms the dead end of a large drainage system that covers an area of about 52 000 km² and is subject to great seasonal variation. The main affluents are the Talkheh (Ājī) River in the northeast, which gathers the melted snows from the Sabalān and Sahand massifs, and the twin rivers Zarīneh (Jagātu) and Sīmīneh (Tatavi) in the south."
Fig. 2 - The level of Urmia Lake remained stable between 1970 and 1990, close to the limit of the conservation area (yellow).
2D view 2D view 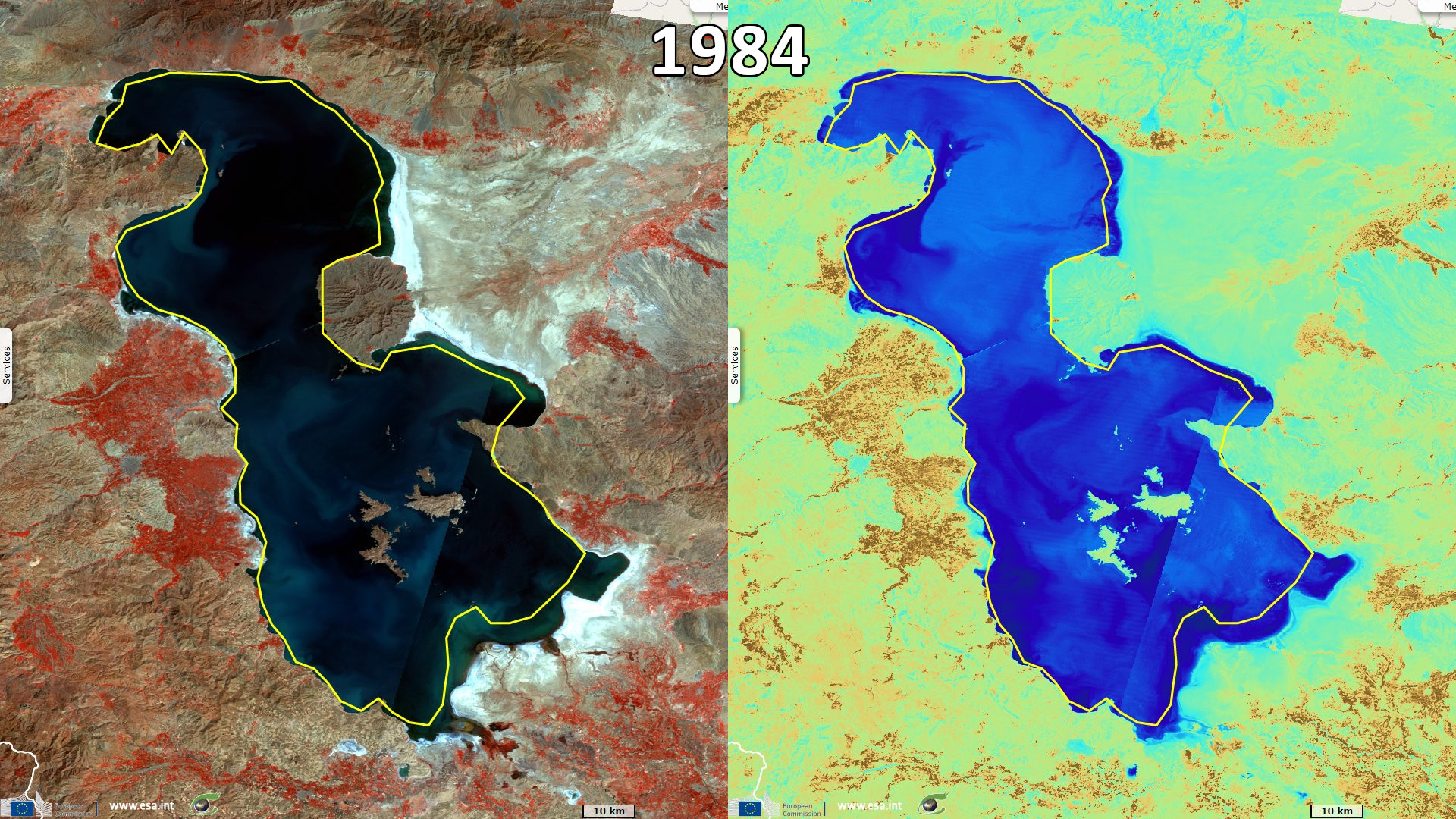 "The volume of water discharged into the lake by these rivers varies considerably during the year: during the spring the Talkheh River and Sīmīneh River may each discharge about 57 m3 per second, while the rate drops to only 1.7-3.7 m3 per second in the dry summer. This variation causes the lake itself to rise and fall, fluctuating by 0.6 to 0.9 m. In addition to seasonal variations, there are also longer periods of fluctuations, lasting from 12 to 20 years, with water-level fluctuations of 1.8 to 2.7 m. Because Lake Urmia’s waters have no outlet, they are highly saline. The lake is one-fourth as salty as the Dead Sea, with a salt content ranging from 8 to 11 percent in the spring to 26 or 28 percent in the late autumn. The main salts are chlorine, sodium, and sulfates. Organic life in the lake’s waters is limited to a few salt-tolerant species. Copious algae provide food for brine shrimp and cause a bad smell along the lake’s shores. There are breeding populations of sheldrake, flamingo, and pelican, as well as migratory birds" Urmia Lake is the saltiest lake on earth with an active food web. It is a UNESCO biosphere reserve and a Ramsar wetland (Asem et al. 2010).
Fig. 3 - Landsat-5 (09 & 16.07.1995) - It shortly reached a maximum in 1995, its shore moved up to 15 km further inland.
2D view 2D view 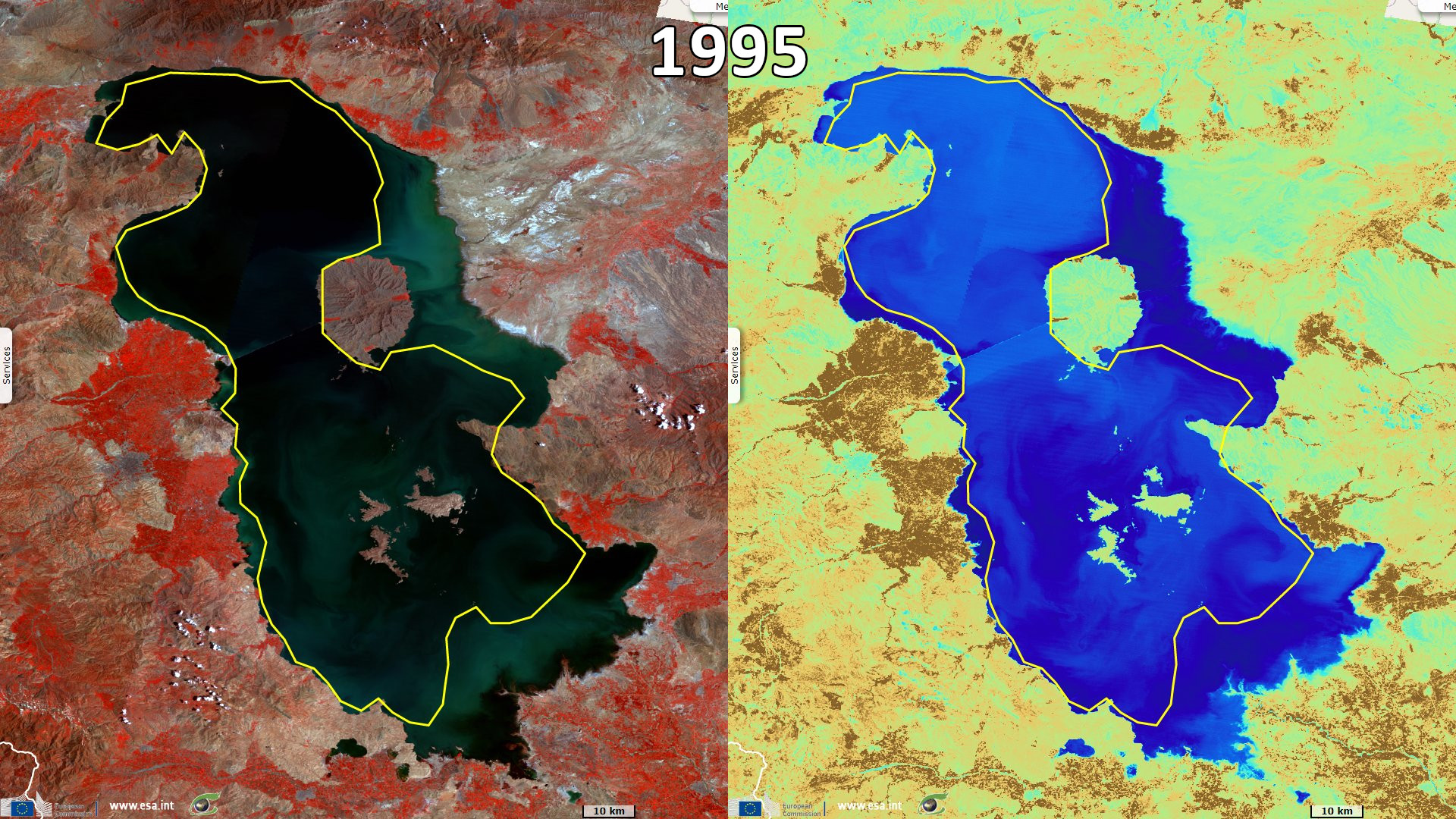 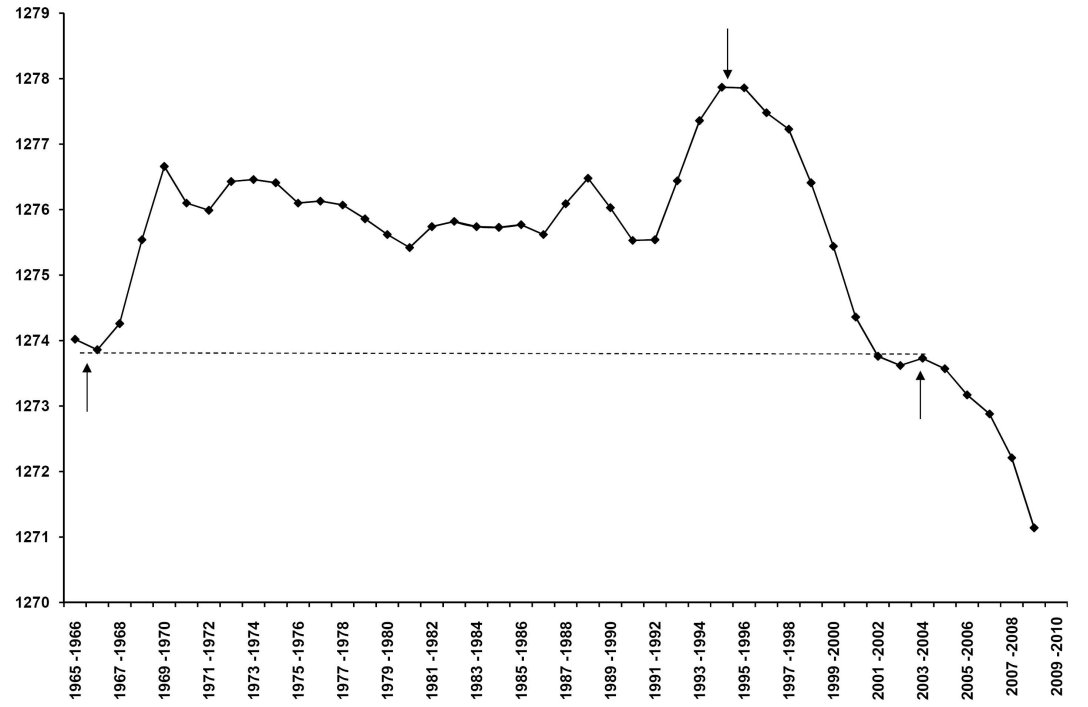 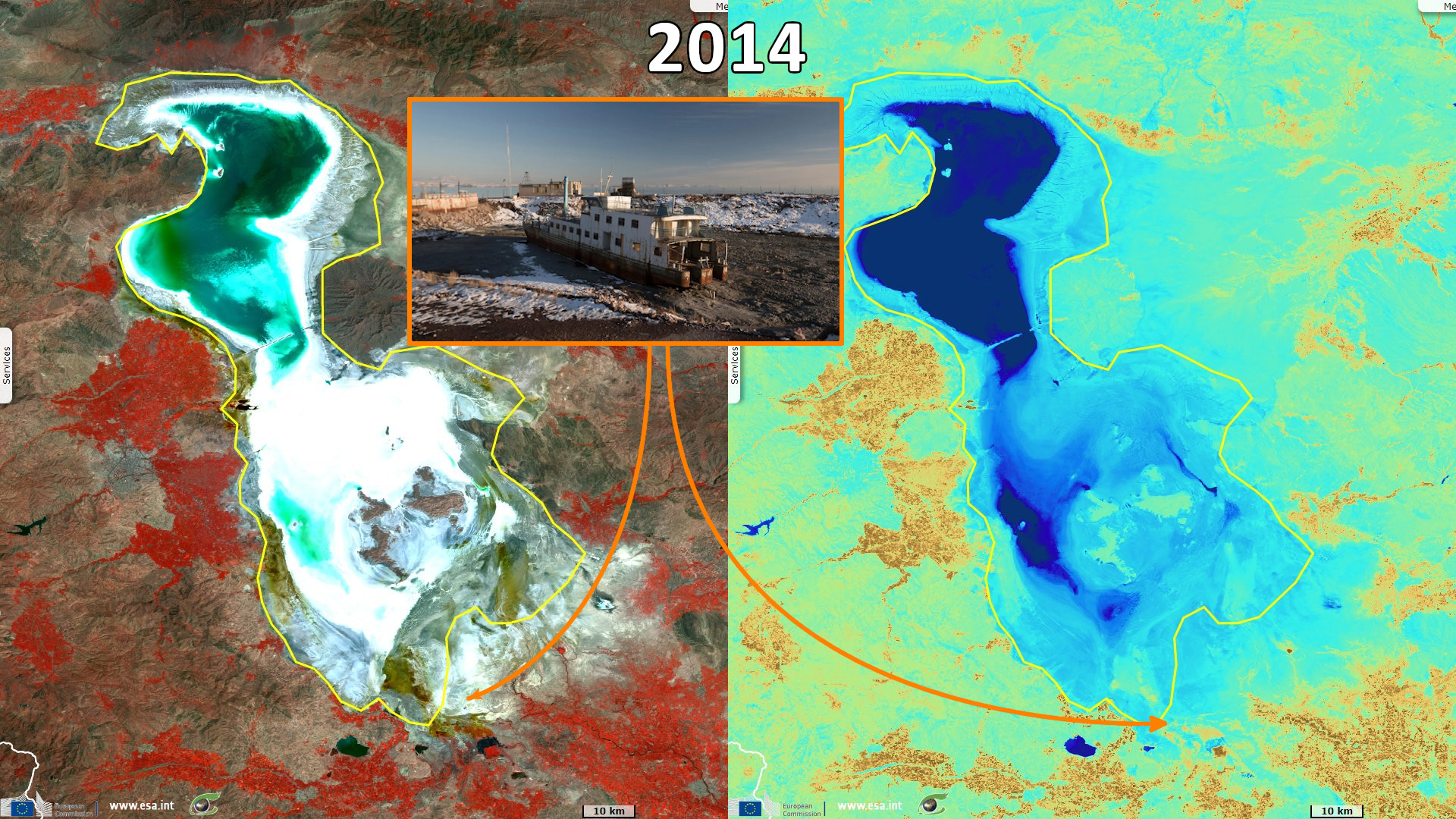 Alireza Asem wrote an article dedicated to Urmia Lake, Drought in Urmia Lake, the largest natural habitat of brine shrimp Artemia that deals with the drop pf the level of the lake: "Urmia Lake has been experiencing a serious ecological crisis since 2003. Lake water is saturated with salts to the point where salt crystals form on the lake surface year round. The salinity of Urmia Lake has increased from 169 g/L in 1995 to more than 300 g/L in 2003-2004 (Sorgeloos 1997, Ahmadi 2005, 2007). Many hectares of surrounding land have been converted to salt marshes and, in the southern and southeastern areas, the coastline has retreated several kilometers. The salt-saturated water of the lake has disrupted the development of waterbirds. Experts believe the current situation of Urmia Lake is a result of global climate change, dam projects in the watershed, and the development of non-mechanized farming in the lake basin."
Fig. 5 - Sentinel-2 (17 & 20.08.2020) - The shallow lake had partially refilled in 2020.
2D view 2D view 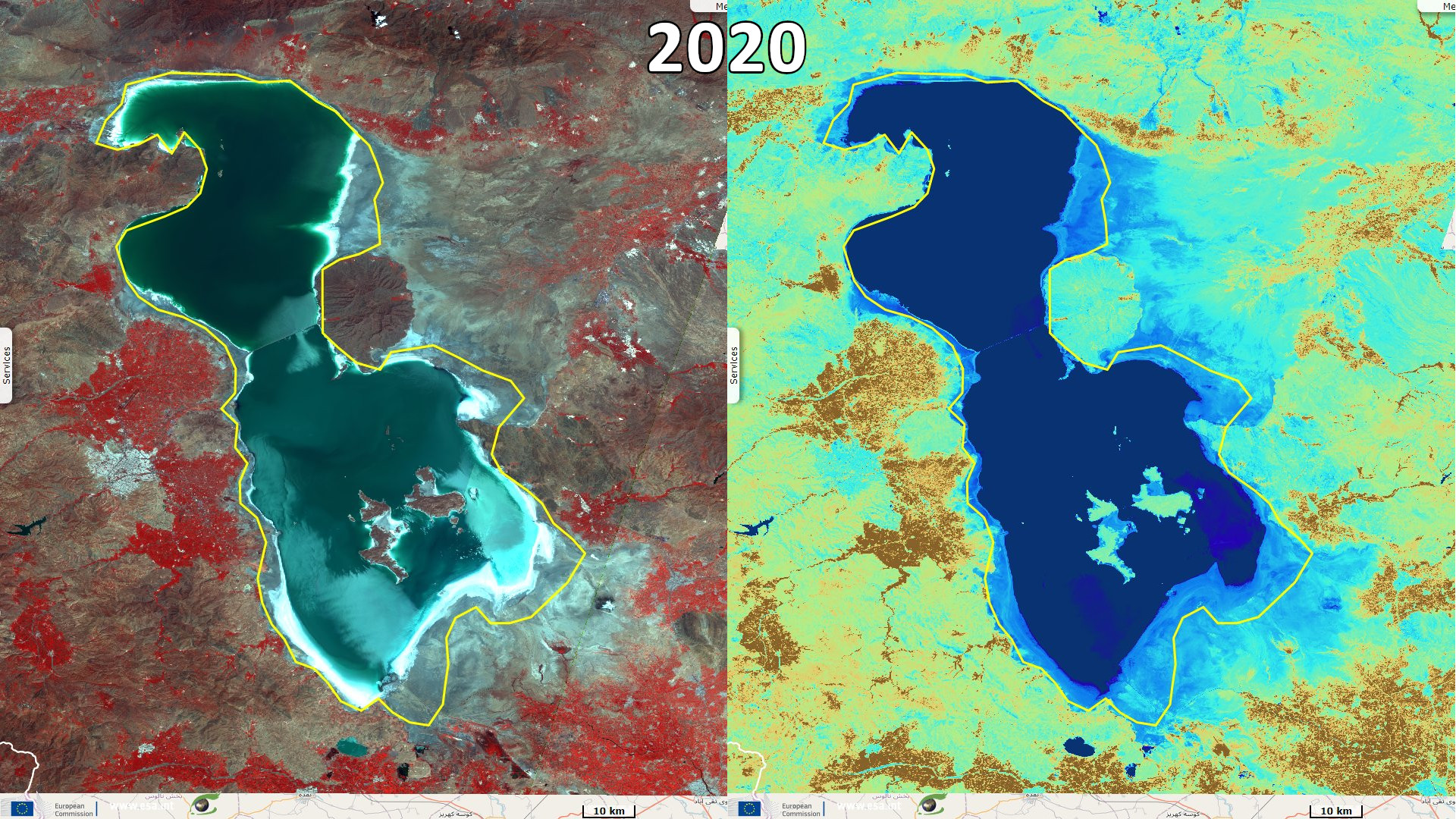 In his 2014 article for the New-York Times, Its Great Lake Shriveled, Iran Confronts Crisis of Water Supply, Thomas Erdbrink developed on the anthropic causes and consequences: "Iran’s water troubles extend far beyond Lake Urmia, which as a salt lake was never fit for drinking or agricultural use. Other lakes and major rivers have also been drying up, leading to disputes over water rights, demonstrations and even riots. Major rivers near Isfahan, in central Iran, and Ahvaz, near the Persian Gulf, have gone dry, as has Hamoun Lake, in the Afghanistan border region. Dust from the dry riverbeds has added to already dangerously high air pollution levels in Iran, home to four of the 10 most polluted cities in the world, the United Nations says."
Fig. 6 - Sentinel-2 (20 & 22.07.2022) - The lake started shrinking again in 2021 and 2022.
2D view 2D view 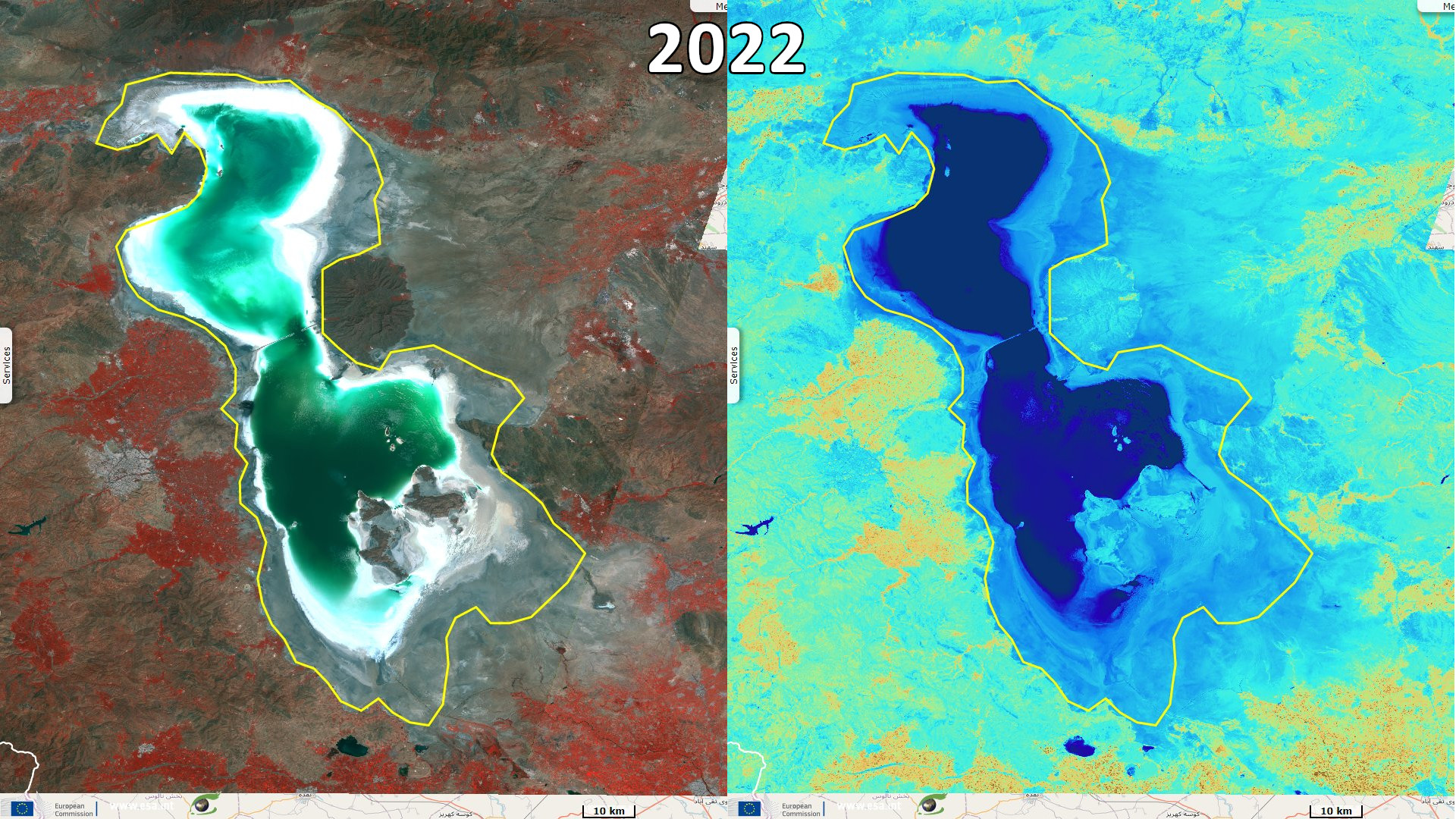 "But nowhere is the crisis more pronounced than at Lake Urmia, once one of the largest salt lakes in the world, it was slightly larger than Great Salt Lake in Utah. Environmentalists are warning that the dried salt could poison valuable agricultural lands surrounding the lake, and make life miserable for the three million people who live in its vicinity. Half an hour’s drive into the mountains above the city of Urmia stands the mighty Chahchai Dam, collecting water that would otherwise have reached the lake. The dam, finished during Mr. Ahmadinejad’s first term, now holds a huge lake itself, which local farmers use for irrigating their lands."
Fig. 7 - Red: 2022 (current situation), green: 2014 (minimum), blue: 1984 (1970-1990 plateau) - Recent evolution compared to the latest stable value.
2D view 2D view 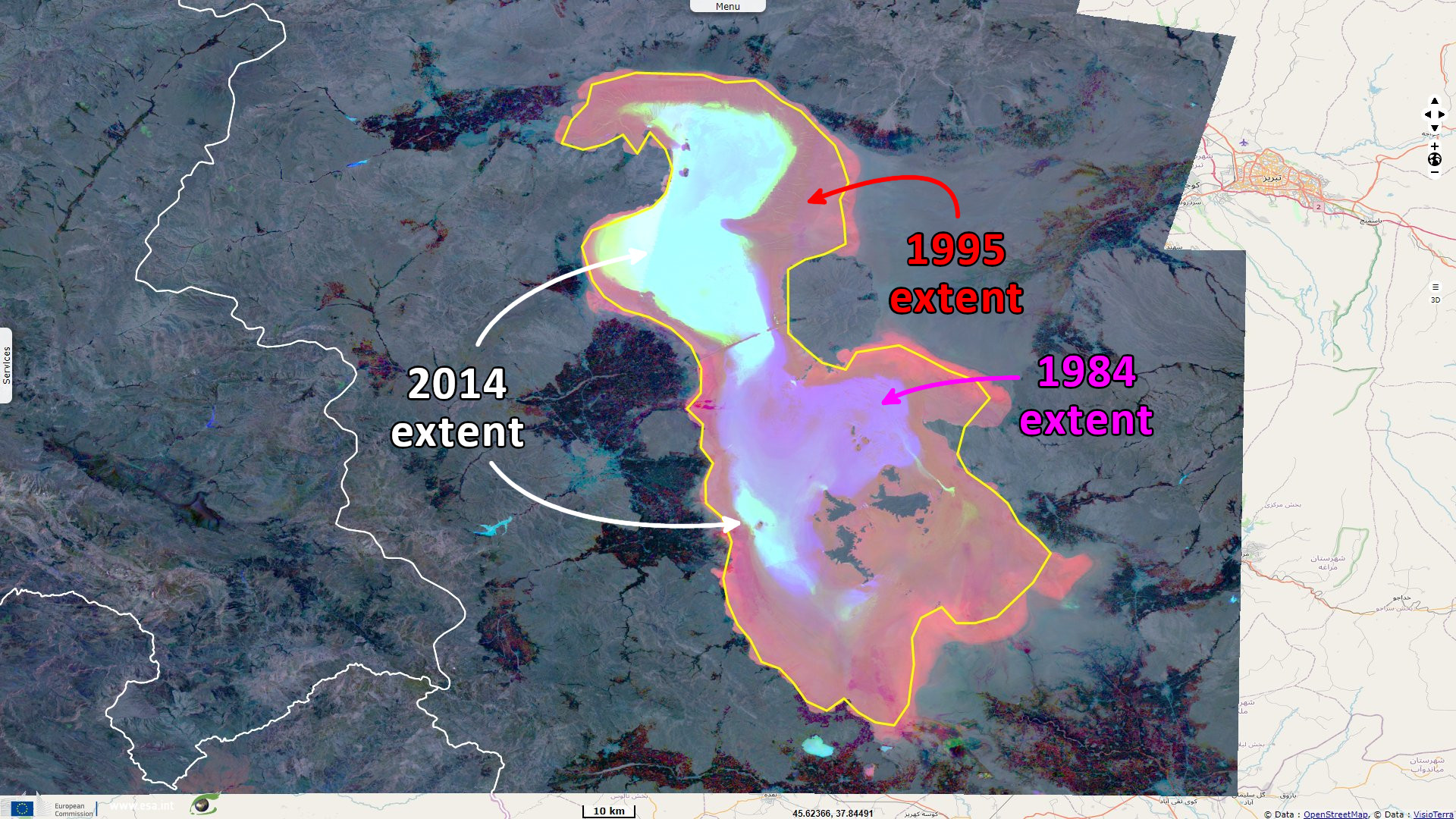 "Besides producing badly needed electricity, the dams are intended to address the water shortage. But too often, the water is wasted through inefficient irrigation techniques, particularly spraying. In recent decades, the amount of land dedicated to agriculture in the region, the country’s heartland, has tripled, with many farmers growing particularly thirsty crops like grapes and sugar beets, Mr. Ranaghadr pointed out. His department has calculated that about 90 percent of all the water that should end up in the lake is sprayed on fields."
Fig. 8 - Sentinel-2 (20 & 22.07.2022) - At south, a new canal brings the water directly from the river to the lake ; it cannot be navigated to its end.
2D view 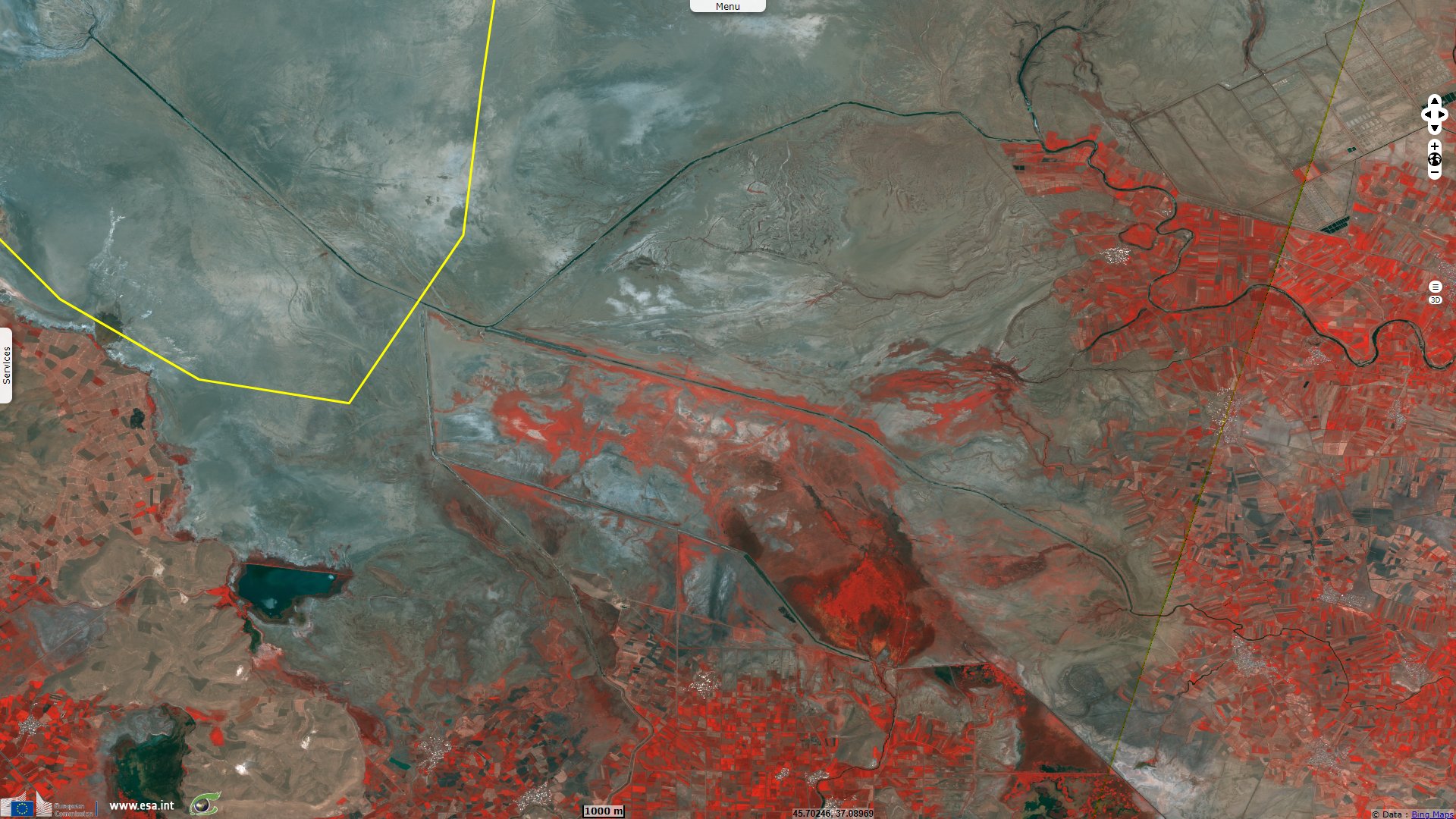 Alireza Asem adds some perspective from the past: "However, historical documents indicate that Urmia Lake experienced a severe drought more than 200 years ago. In 1800, the maximum depth was only 75 cm. The lake was so shallow that an east-west road was created through the lake bed and oral histories from elders confirm the presence of this road (Tamaddon 1971). This history indicates that Urmia Lake has undergone more extreme droughts than present but the lake subsequently recovered."
The views expressed herein can in no way be taken to reflect the official opinion of the European Space Agency or the European Union.
Contains modified Copernicus Sentinel data 2022, processed by VisioTerra.