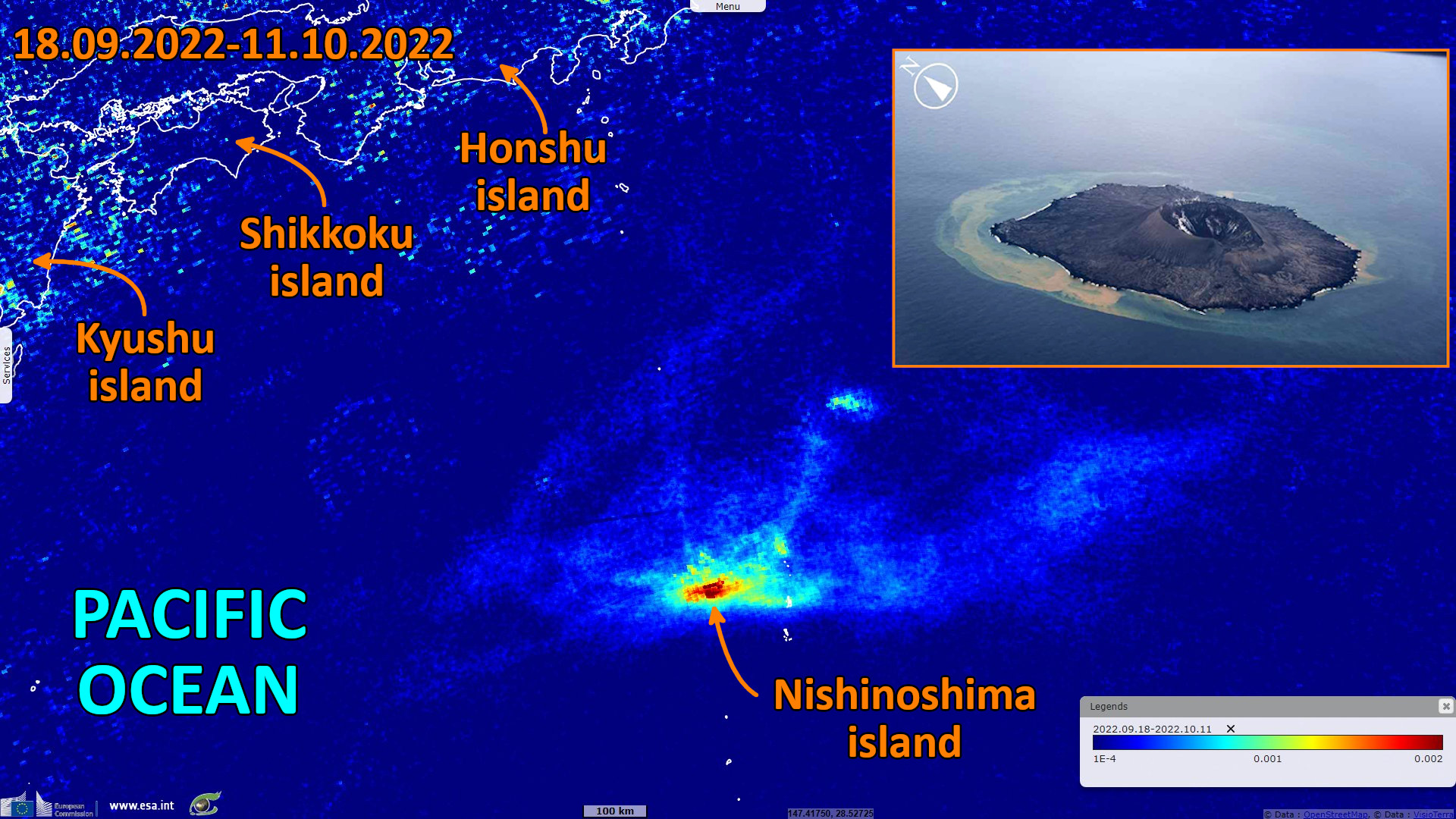 Matthew Blackett, Reader in Physical Geography and Natural Hazards, Coventry University published the article Underwater volcanoes: how ocean colour changes can signal an imminent eruption for The Conversation: "The scale of a recent volcano eruption took the people of Tonga by surprise. Scientists monitoring the submarine volcano, Hunga Tonga-Hunga Ha'apai, were likewise caught off-guard, failing to foresee an explosion which would unleash a Pacific-wide tsunami." This event can be seen in the following stories:
Fig. 2 - S2 + Landsat-9 (06.10.2022) - The coloured chemicals form Von Karman vortex streets as they drift along the currents.
2D view 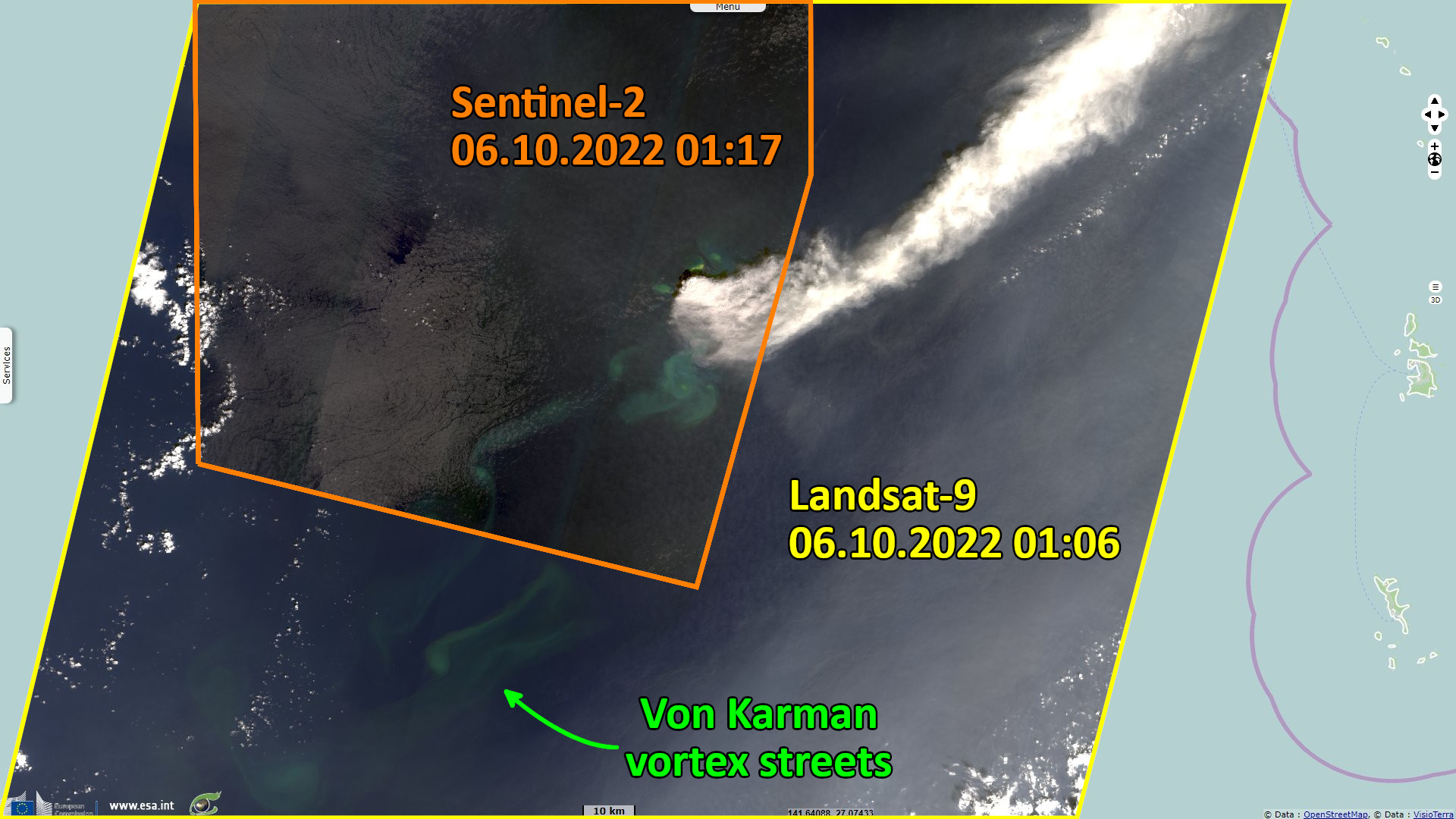 "Satellite observations allow scientists to regularly view vast areas of the ocean surface, helping them note any changes. On numerous occasions, scientists have spotted floating rafts of pumice which can be traced back to submarine eruptions that might otherwise have gone undetected. But this only allows us to identify eruptions after they have happened – it doesn’t help us stay a step ahead of underwater volcanoes. 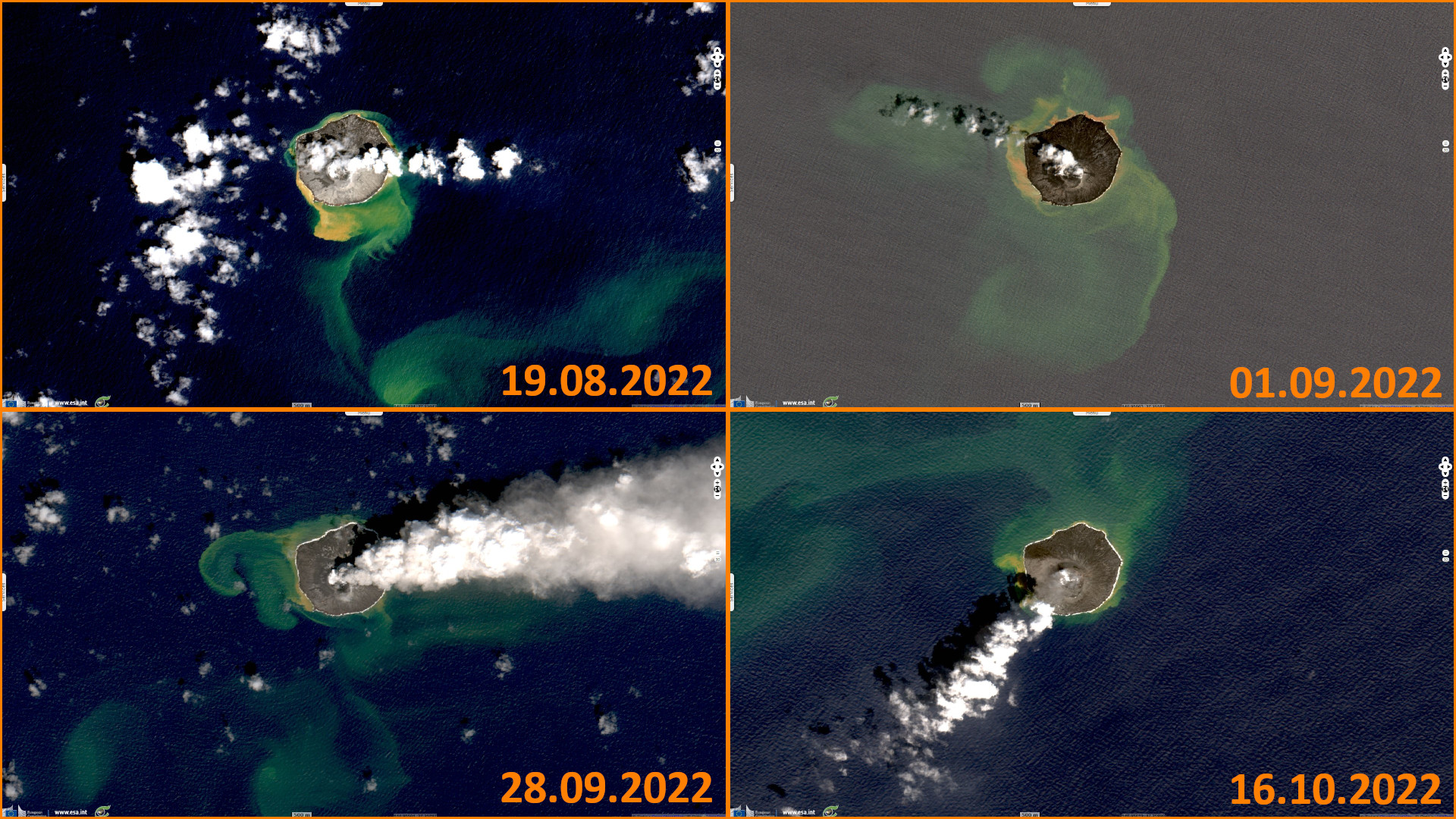 Nishinoshima volcano spews large amount of sulfur dioxide into the atmosphere. It releases large amounts of chemicals from the earth, turning the ocean to shades of yellow, brown and green, depending on the ratio of silicon to iron and aluminium.

"Later work confirmed that a higher proportion of iron precipitates produces a yellow-brown hue, while higher proportions of aluminium or silicon result in a white colour. Scientists revisited these findings during submarine eruptions around another volcanic Japanese island, Nishinoshima. In satellite photographs of Earth’s surface, the ocean was seen to turn varying shades of yellow, brown and green, depending on the ratio of silicon to iron and aluminium.

With this finding, scientists discovered that the colour of the ocean began to change about a month before the submarine volcano erupted. This suggests that ocean colour may be a reliable precursor of underwater volcanic activity. And, given this insight, there is every possibility that in the future, automated systems could analyse satellite images of the ocean in volcanic regions for signs of an impending eruption."
Fig. 4 - S2 (11.10.2022) - The cinder plume is released from the hot volcano caldera.
2D view 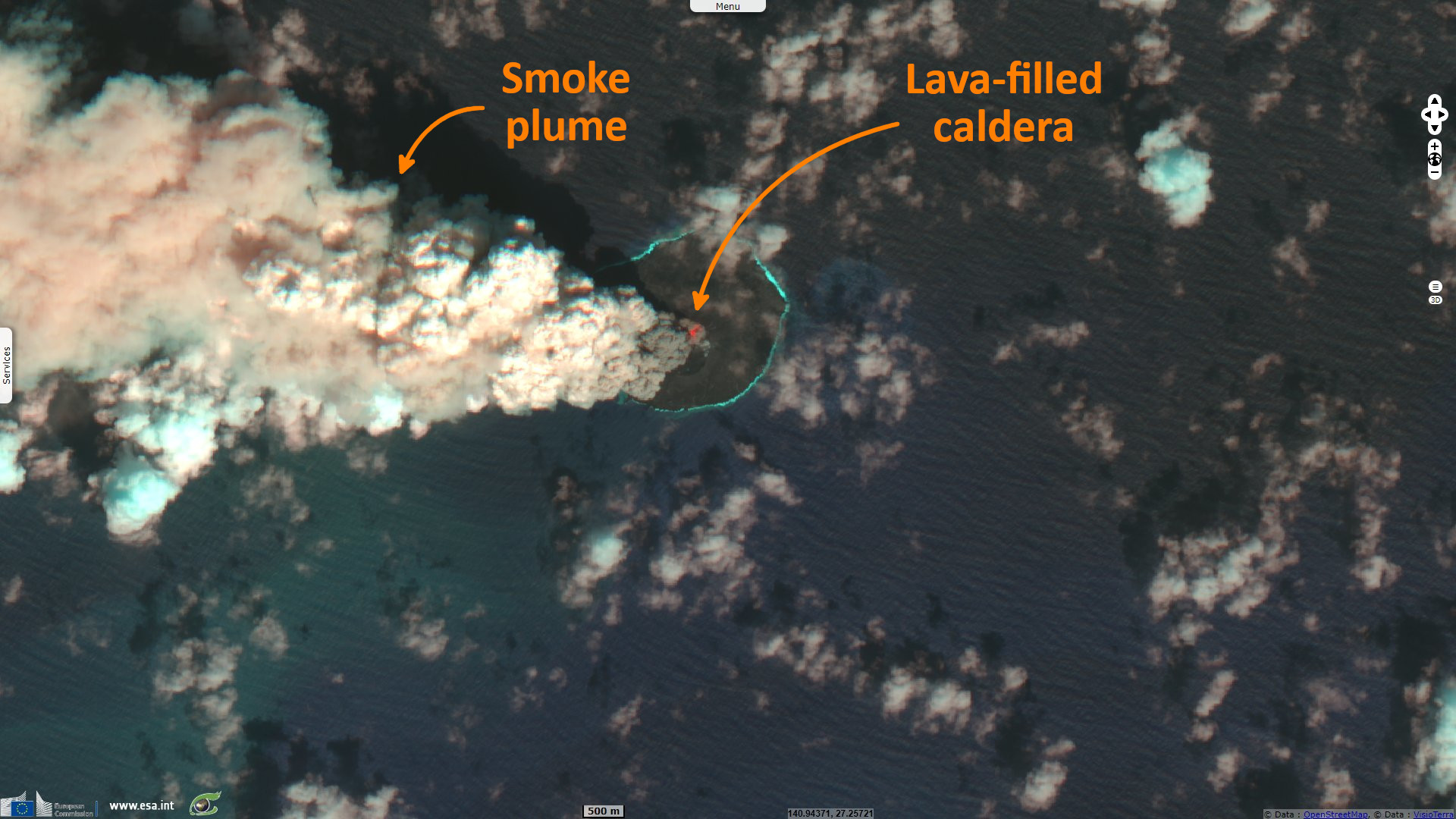 "The destruction wrought by the submarine eruption of Hunga Tonga-Hunga Ha'apai appears to be intense. The tsunami that followed obliterated coastal areas of Tonga and even caused deaths thousands of miles away in Peru. Ash coated the island, destroying crops and shutting down transport networks.

Had an early warning been available, perhaps on the scale of weeks as research suggests might be possible one day, it would have let people on Tonga stock up on food and water and evacuate vulnerable regions. This once in a millennium tragedy might at least stimulate further research into monitoring and predicting the ever-present hazard of submarine volcanic eruptions."
The views expressed herein can in no way be taken to reflect the official opinion of the European Space Agency or the European Union.
Contains modified Copernicus Sentinel data 2022, processed by VisioTerra.