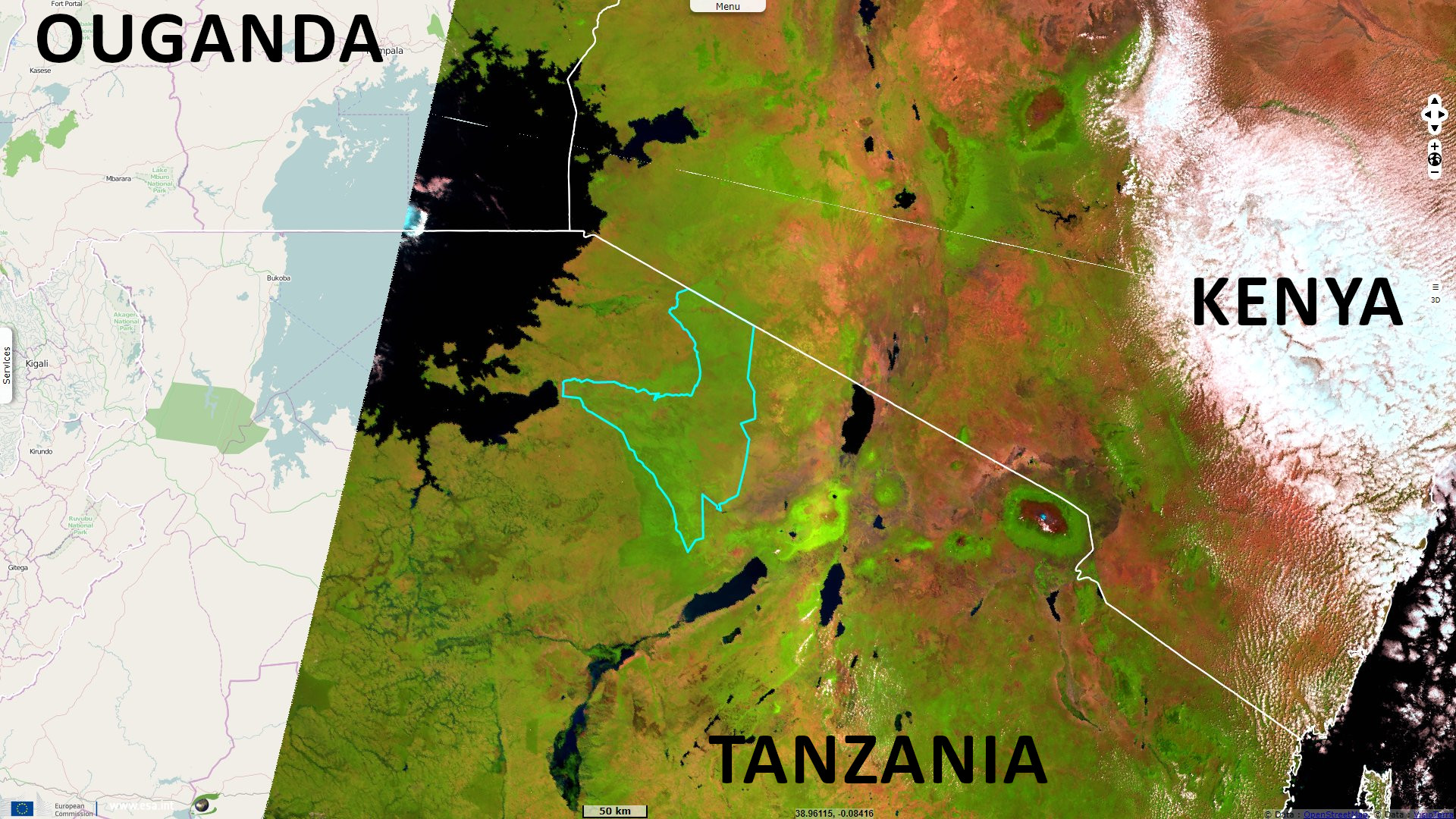 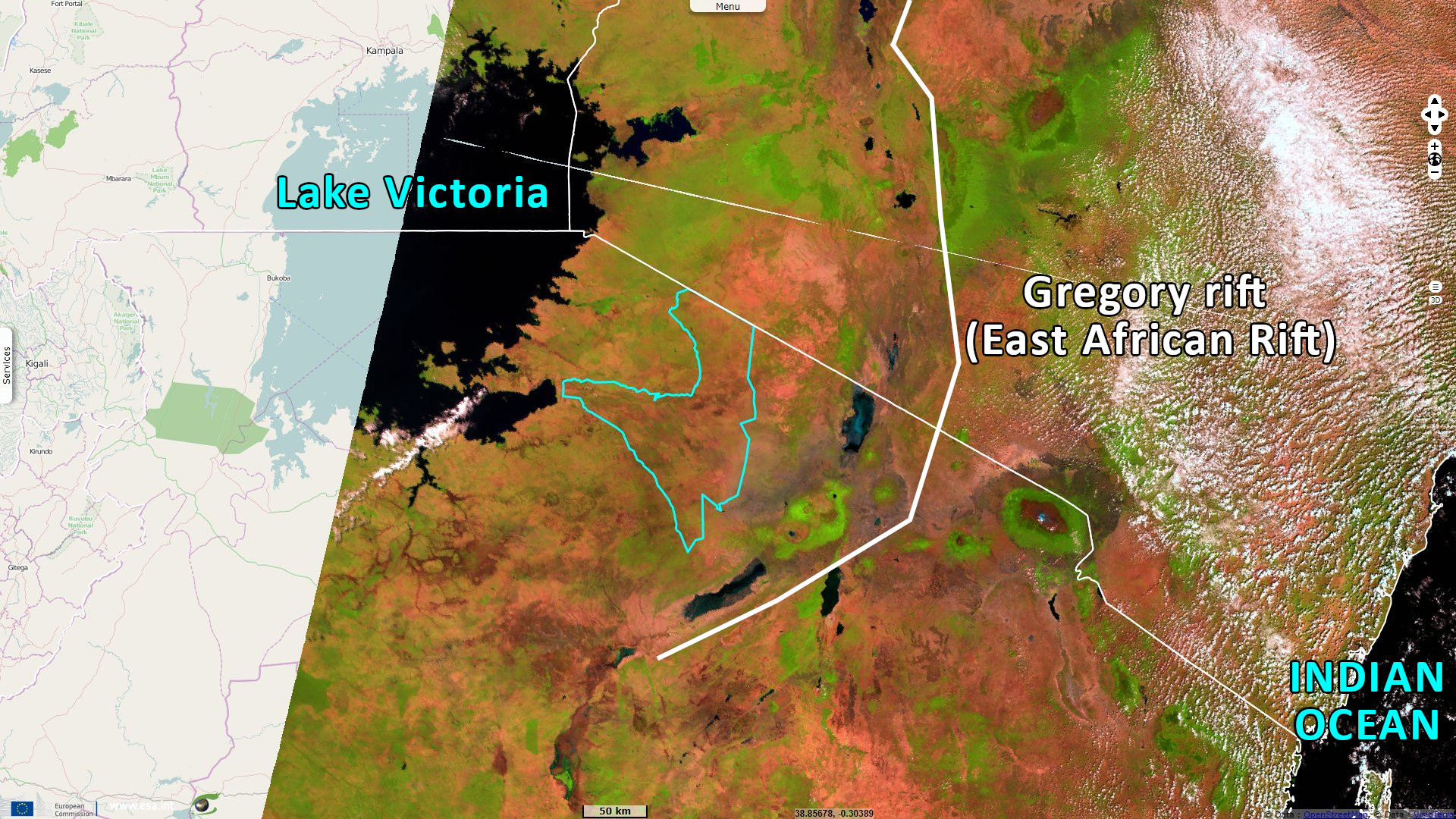 Half the size of Belgium, the Serengeti national park is known for being the largest annual animal migration in the world. It is home to the ‘Big Five’: Lions, leopards, elephants, African buffalo and rhinoceroses.
Fig. 3 - S3 OLCI (28.01.2021) - The Serengeti is neighboured by several contiguous conservation areas, the Ngorongonro and the Masai Mara, easing migrations.
2D view 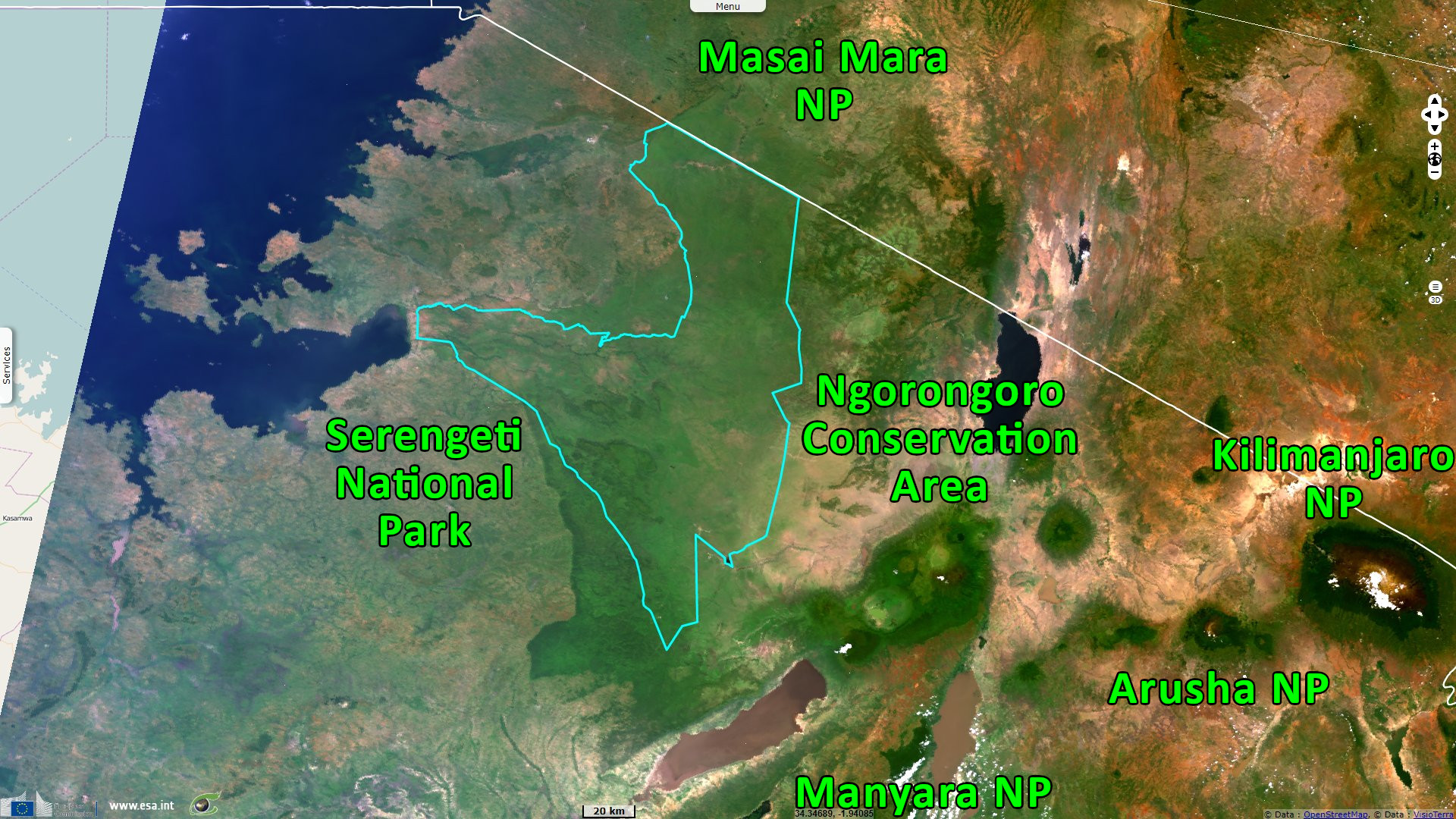 It was incripted as a UNESCO World Heritage site in 1981. Its importance is explained by its sheet: "The Serengeti plains harbour the largest remaining unaltered animal migration in the world where over one million wildebeest plus hundreds of thousands of other ungulates engage in a 1000 km long annual circular trek spanning the two adjacent countries of Kenya and Tanzania. This spectacular phenomenon takes place in a unique scenic setting of ‘endless plains’: 25 000 km² of treeless expanses of spectacularly flat short grasslands dotted with rocky outcrops (kopjes) interspersed with rivers and woodlands. The Park also hosts one of the largest and most diverse large predator-prey interactions worldwide, providing a particularly impressive aesthetic experience."
Fig. 4 - S3 OLCI (04.01.2017) - Lake Nation and Lake Eyasi were almost dry on this image where the Serengeti is much less green.
2D view 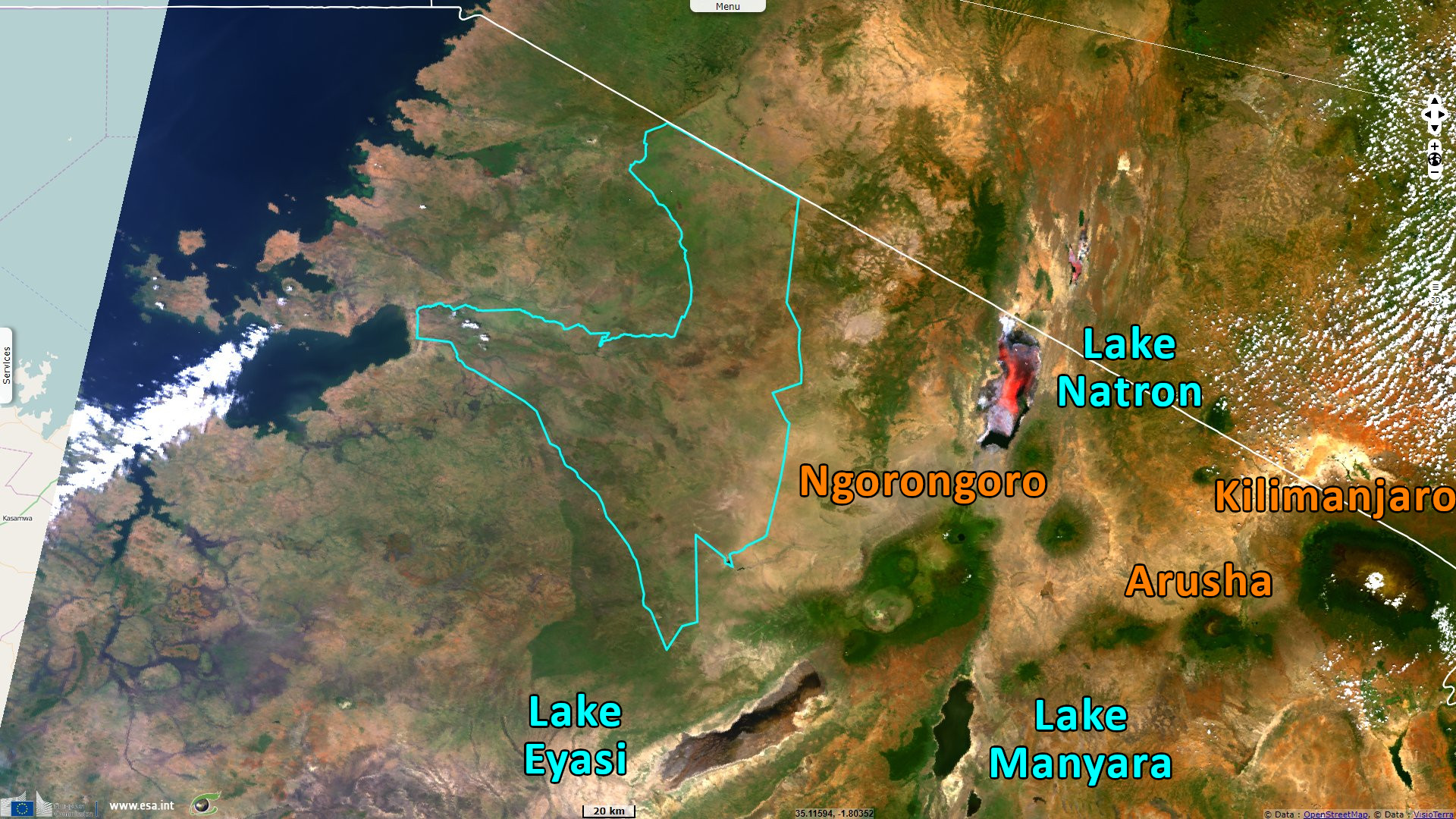 "The remarkable spatial-temporal gradient in abiotic factors such as rainfall, temperature, topography and geology, soils and drainage systems in Serengeti National Park manifests in a wide variety of aquatic and terrestrial habitats. The combination of volcanic soils combined with the ecological impact of the migration results in one of the most productive ecosystems on earth, sustaining the largest number of ungulates and the highest concentration of large predators in the world."
Fig. 5 - S2 (04 & 12.03.2022) - There’s a dry spell in January and February between the short and long rains, which begin in March.
3D view 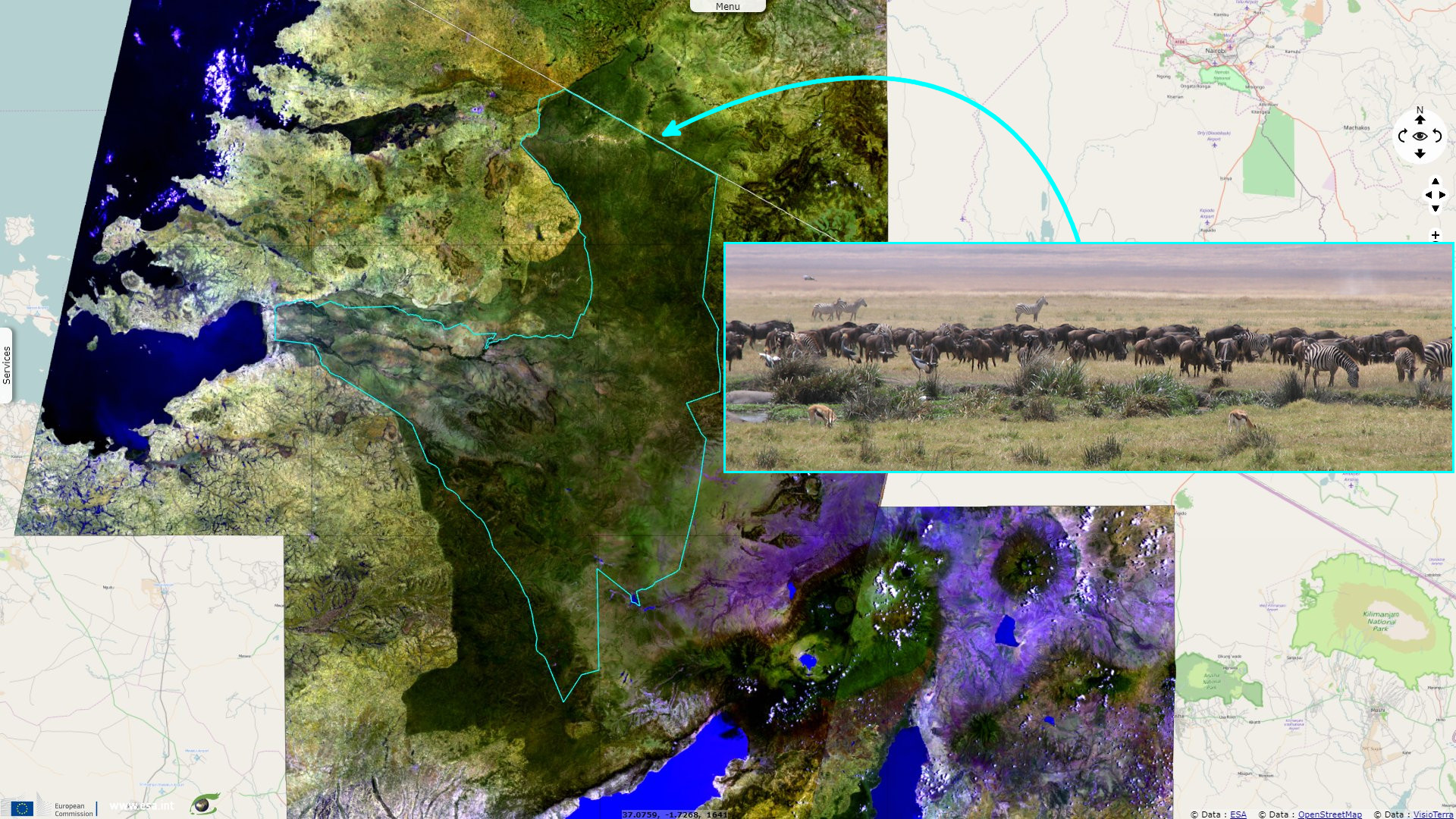 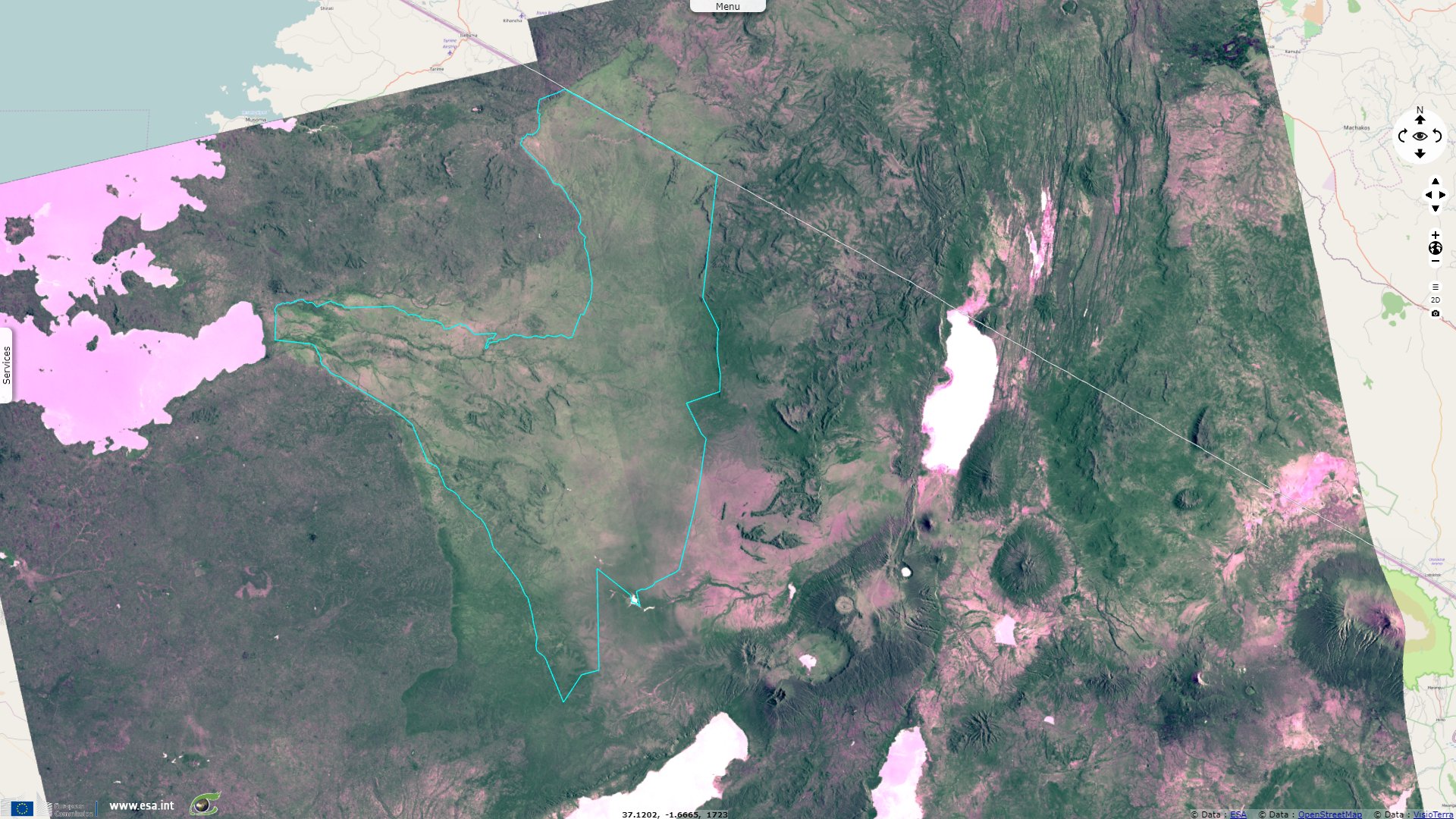 "Of these, the black rhino Diceros bicornis, leopard Panthera pardus, African elephant Loxodonta africana and cheetah Acynonix jubatus are listed in the IUCN Red List. There are over 500 species of birds that are perennially or seasonally present in the Park, of which five species are endemic to Tanzania. The Park has the highest ostrich population in Tanzania and probably Africa, making the population globally important."
Fig. 7 - S2 (31.05.2020 & 12.07.2020) - April and May are when the long rains usually fall while June is quite dry.
3D view

"Serengeti National Park is at the heart the larger Serengeti ecosystem, which is defined by the area covered by the annual migration. The property is contiguous with Ngorongoro Conservation Unit, an area of 5280 km² declared a World Heritage Site in 1979. The entire ecosystem also includes the Maswa Game Reserve (2200 km²) in the south, Grumeti and Ikorongo Game Reserves in the east, Maasai Mara National Reserve in Kenya (1672 km²) to the north, and Loliondo Game Controlled Area in the west."
Fig. 8 - S1 (22.05.2021->20.06.2021) - The wildebeest herds move northward at this time of the year, arriving in the central Serengeti.
3D view 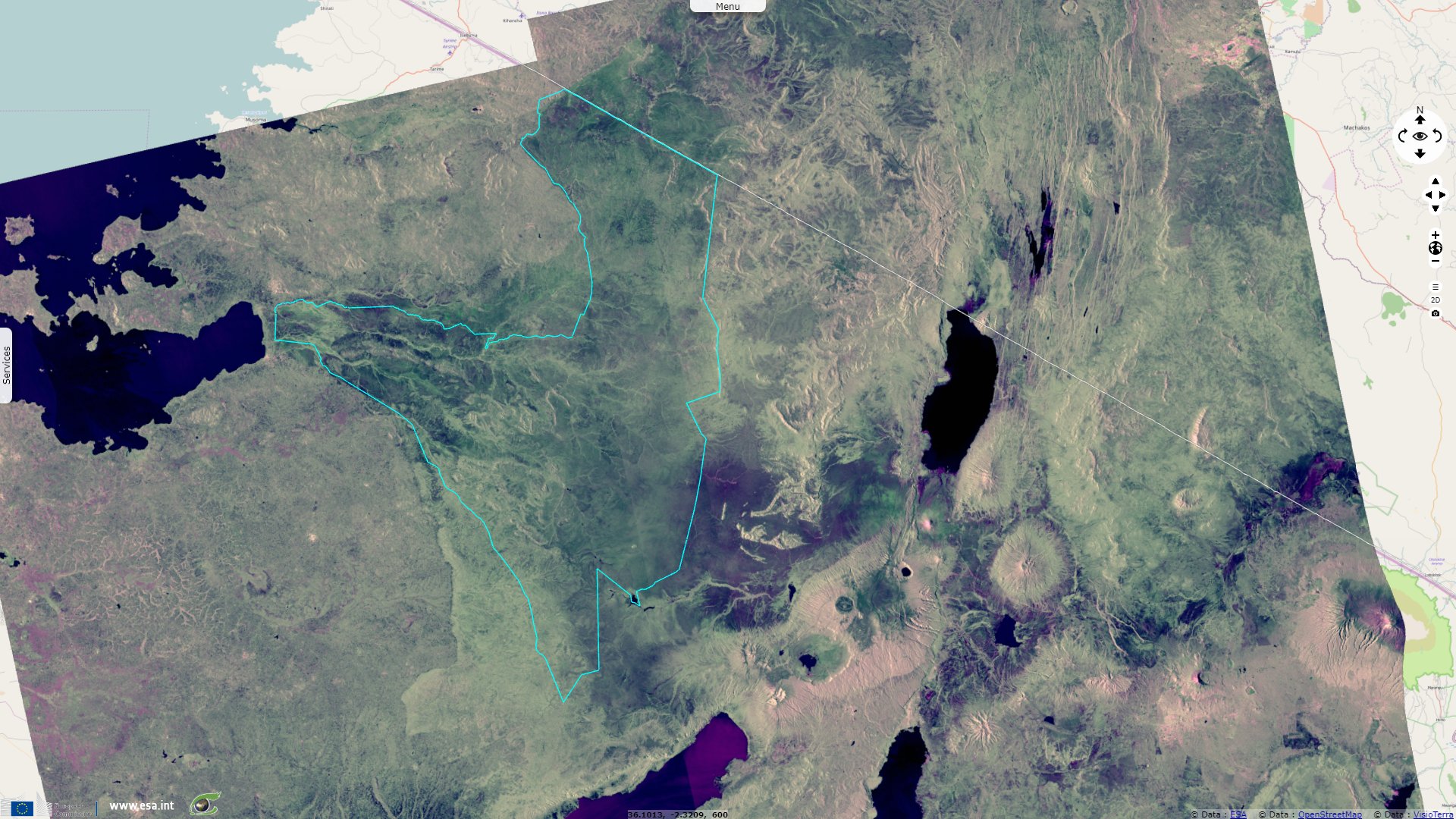 "This entire ecosystem is intact and no barriers hamper the migration. Serengeti National Park is sufficiently large and intact to ensure the survival and vigour of all the species contained therein, if maintained in its present state but does not, by itself, ensure the protection of the entire ecosystem. However, all other parts of the ecosystem do have a greater or lesser degree of protection."
Fig. 9 - S2 (31.08.2020 & 18.09.2020) - July through September is the driest time of year, with little rainfall and lighting-caused fires.
3D view 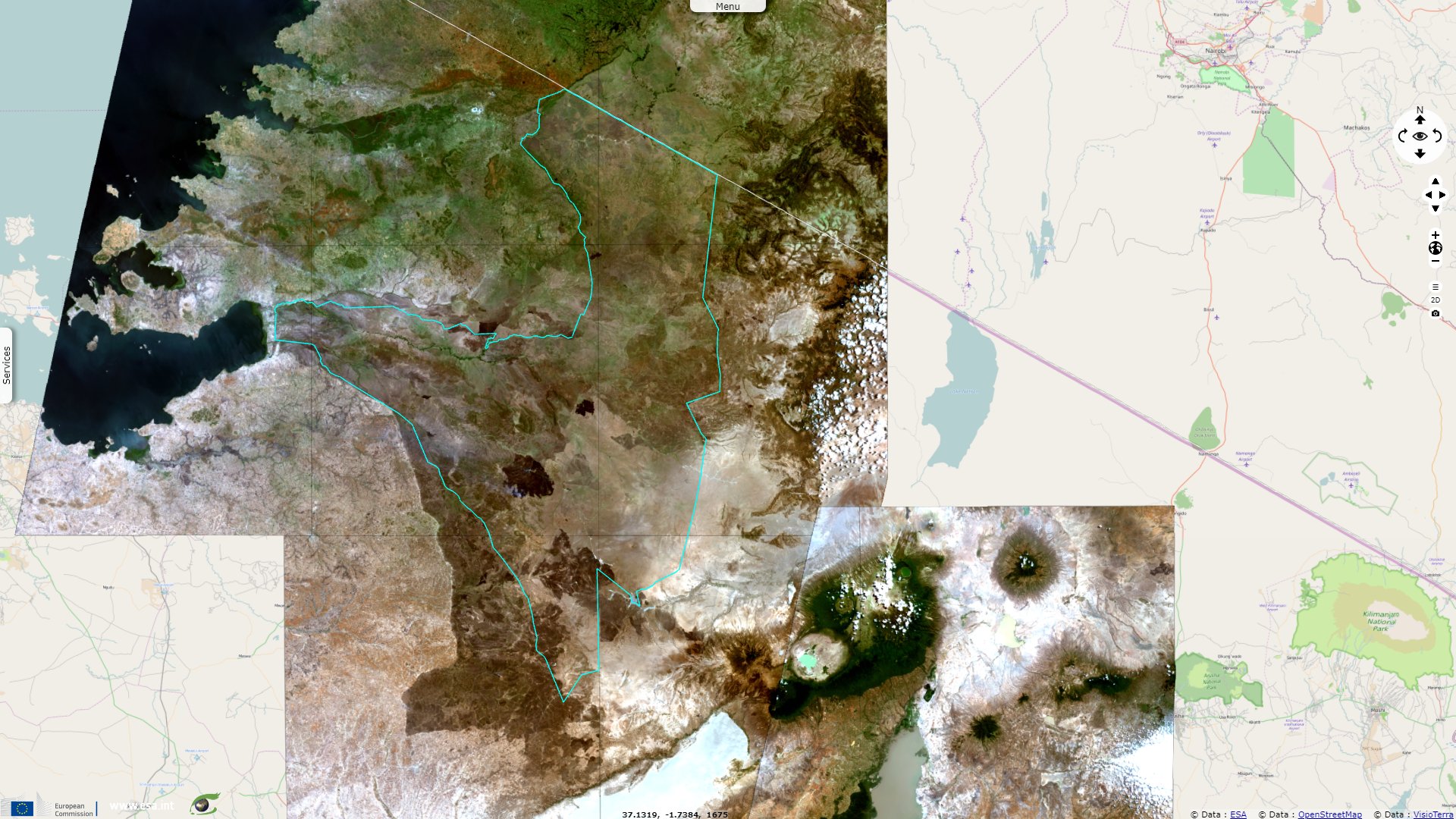 The complete migration route is around 800 km. South of this migration route covers the Ngorongoro Conservation Area where around half a million wildebeests are born between January and March. By March, at the beginning of the dry season, roughly 1.5 million wildebeest and 250 000 zebras start to migrate heading north towards Maasai Mara in Kenya, followed by the largest lion population in Africa. Common eland, plains zebra, and Thomson's gazelle join the wildebeest. In April and May, the migrating herds pass through the Western Corridor. To get to the Maasai Mara, the herds have to cross the Grumeti and Mara Rivers where around 3000 crocodiles lie in wait. For every wildebeest captured by the crocodiles, 50 drown. When the dry season ends in late October, the migrating herds start to head back south. Around 250 000 wildebeests and 30 000 plains zebras die annually from drowning, predation, exhaustion, thirst, or disease.
Fig. 10 - S1 (05->24.09.2020) - The grass is short and animals gather around waterholes. North of the park, wildebeest herds cross the river into Kenya.
3D view 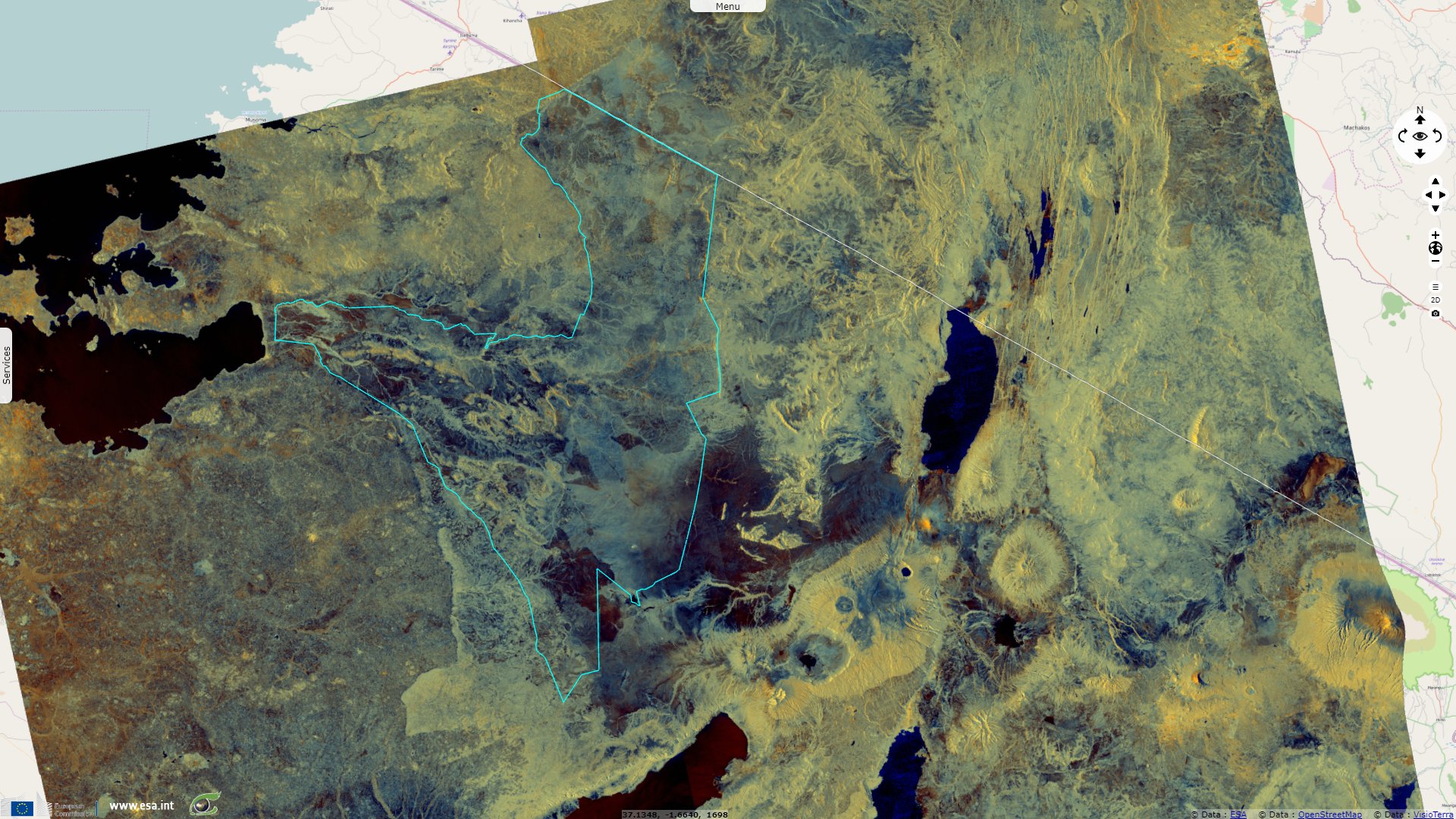 The UNESCO sheet adds: "A potential threat is the plan to build a transport infrastructure through the Serengeti. This would essentially cut the ecosystem into two halves, with predictably negative consequences on the Serengeti. Adding Maswa Game Reserve and Maasai Mara National Reserve to the World Heritage List, or giving then the status of a buffer zone would further safeguard the Outstanding Universal Values of this property."
Fig. 11 - S2 (04 & 12.03.2022) - Several camps are located between grassy plains at east and hills at west near a perennial water spot.
2D view 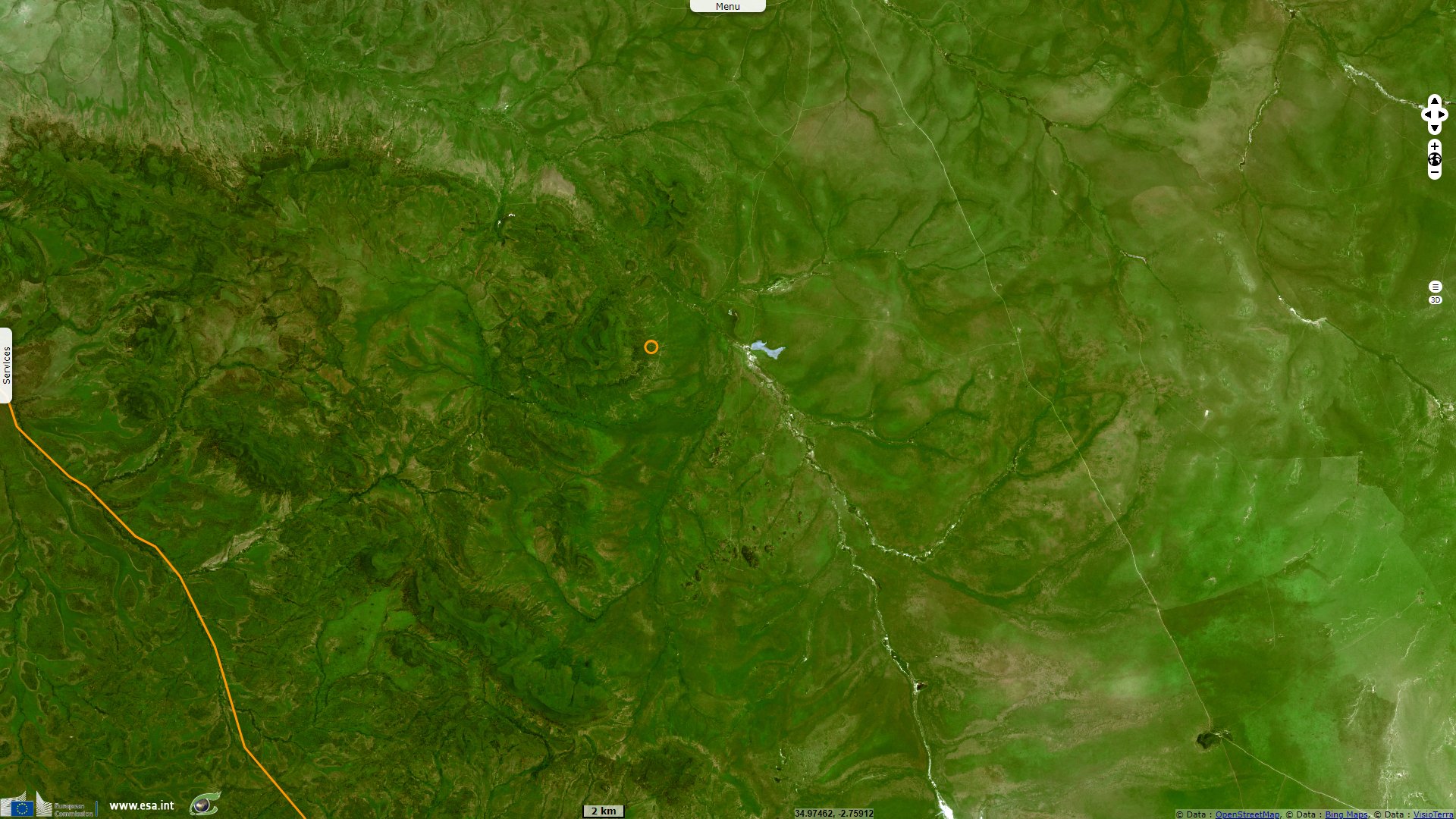 "Another major potential threat to the integrity of the Park is the scarcity of surface water for the animals during dry years, as only one river (Mara) flows perennially through the Park. An extension of the Park boundary to reach Lake Victoria providing a corridor for animals to access water in times of drought is planned for the future to address this issue." Other mentioned threats include deforestation and ranching.
Fig. 12 - Bing Maps base layer - These camps encourage sustainable development so that wildlife keeps on thriving while locals benefit from resources.
2D view 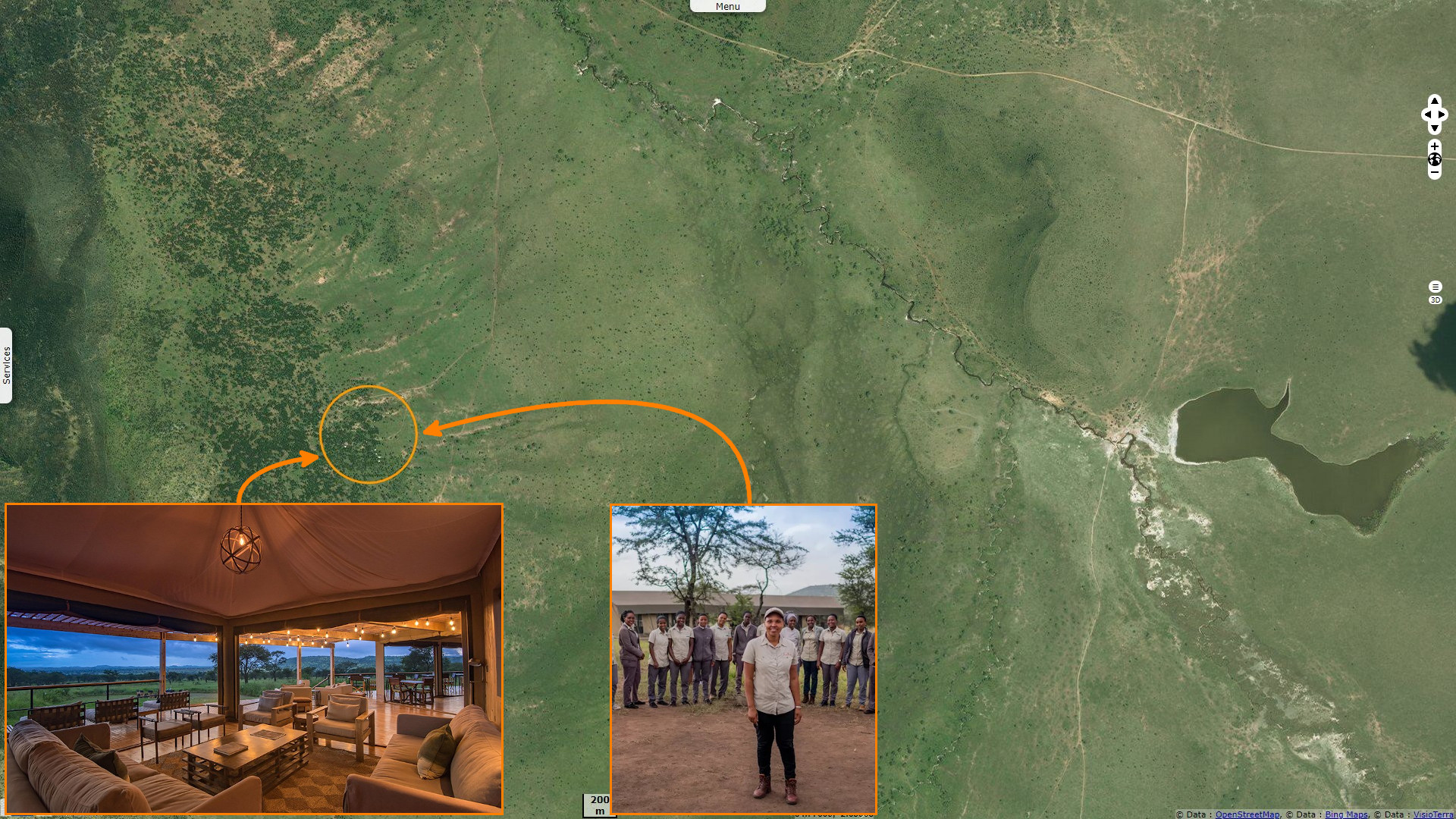 Several tented camps are located west of a critical perennial spot of water, Lake Magadi. They promote ecotourism, wildlife spotting and photographic safaris in 4x4 vehicles and balloons. One of them, Dunia (meant "The World" in swahili) Camp, is staffed entirely by women. These camps are placed to explore three game viewing areas: Seronera, the Moru Kopjes and the southern Serengeti plains. The Seronera River is a gathering place for lots of wildlife, providing ample opportunity for spotting predators in action. The Moru Kopjes are a cluster of old granite boulders, favoured by big cats that like to use them as lookout points. You might even spot the rare black rhino. The southern plains are covered in lush grass between December and May, perfect for calving wildebeest.
The views expressed herein can in no way be taken to reflect the official opinion of the European Space Agency or the European Union.
Contains modified Copernicus Sentinel data 2022, processed by VisioTerra.