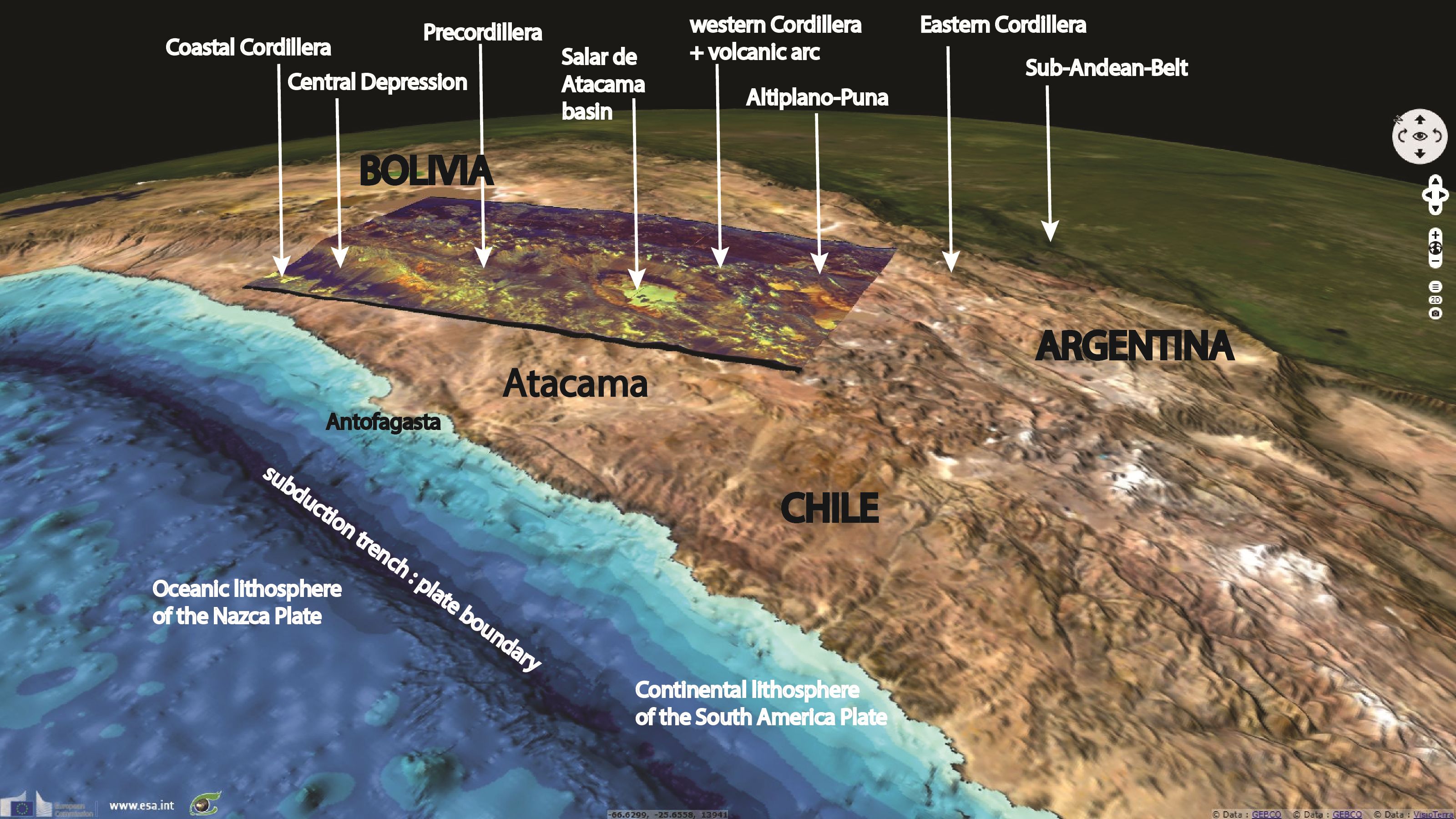 Pr. Jean Chorowicz, emeritus Professor at Sorbonne Universités, UPMC Univ Paris 06 commented the three Sentinel-1B CSAR scenes. "They concern a segment of the Andes where the climate is hyperarid in the west, including the Atacama desert, and wet in the east. A cold water coastal current chills the surface water of the Pacific Ocean reducing the advection of Pacific water vapor inland. Hyperaridity started at ca.12 Ma with the growth of the Andes Mountains that serve as an orographic barrier against water vapor coming from the east. The region is one of the most active plate boundaries in the world where the still ongoing relative convergence between the Nazca and the South American plates is directed N78°E at a very fast speed of 68–80 mm/yr. The Nazca plate oceanic lithosphere (oceanic crust + lithospheric mantle) is subducting eastward underneath the South America plate continental lithosphere (continental crust + lithospheric mantle). If most of the relative motion occurs along the subduction contact at bottom of the Peru-Chile trench, it is clear that differential movement and related deformation also affect the margin of the South America plate producing the wide (750 km) deformation belt of the Andes, one of the world's major mountain ranges (more than 8000 km in length). The Andes are characterized by a succession of north-south trending mountain ranges and basins. An active volcanic arc forms the Western Cordillera at the western border of the Altiplano-Puna range."
Fig. 2 - S1B - View of the region between the Central Depression and the Western Cordillera.
3D view 2D view 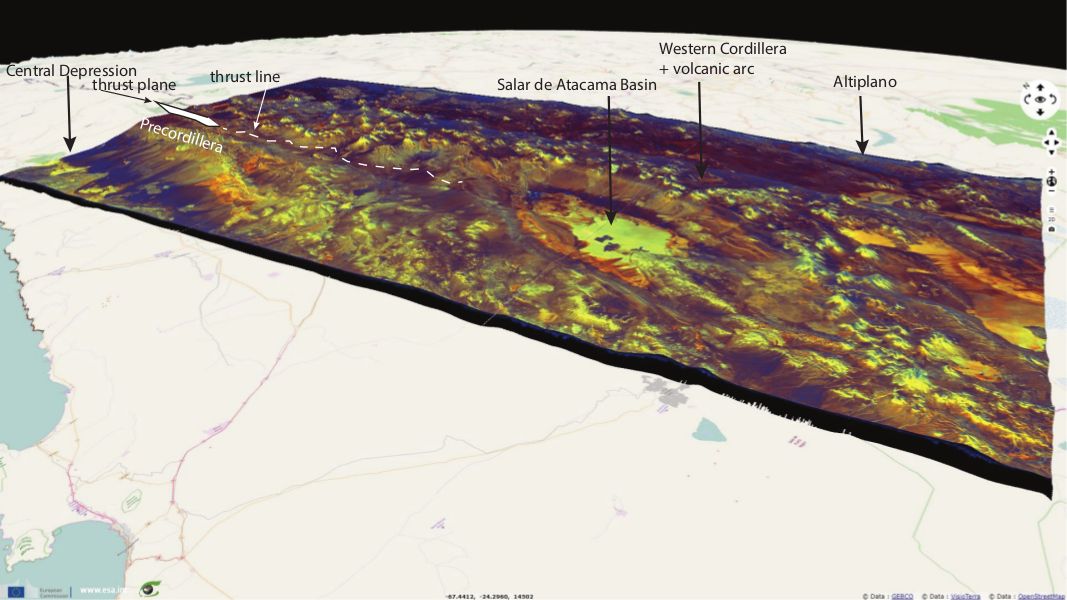 Pr. Jean Chorowicz commented: "During the 12 million year time interval of mostly hyperarid climate there has been little erosion and, in addition, mountains have increased by compression allowing the structural relief to be largely expressed in the landscape. North of the Salar de Atacama basin, an abrupt change in relief and aspect can be clearly observed at the boundary between the Precordillera and the Western Cordillera (Fig.2). This is a major N-striking fault zone along which the Western Cordillera, dragging the Precordillera, is uplifted by more than 1200 m and pushed westward (thrust) over the Precordillera and the Central Depression floor. The Salar de Atacama Basin is a subsiding area located right at a virgation of this major N-striking fault zone which seems to have a strike-slip right-lateral motion component that may explain such a leaky subsiding area by pull-apart effect."
Fig. 3 - S1B - Northwestern corner of the Salar de Atacama depression.
3D animation 3D view 2D animation 2D view 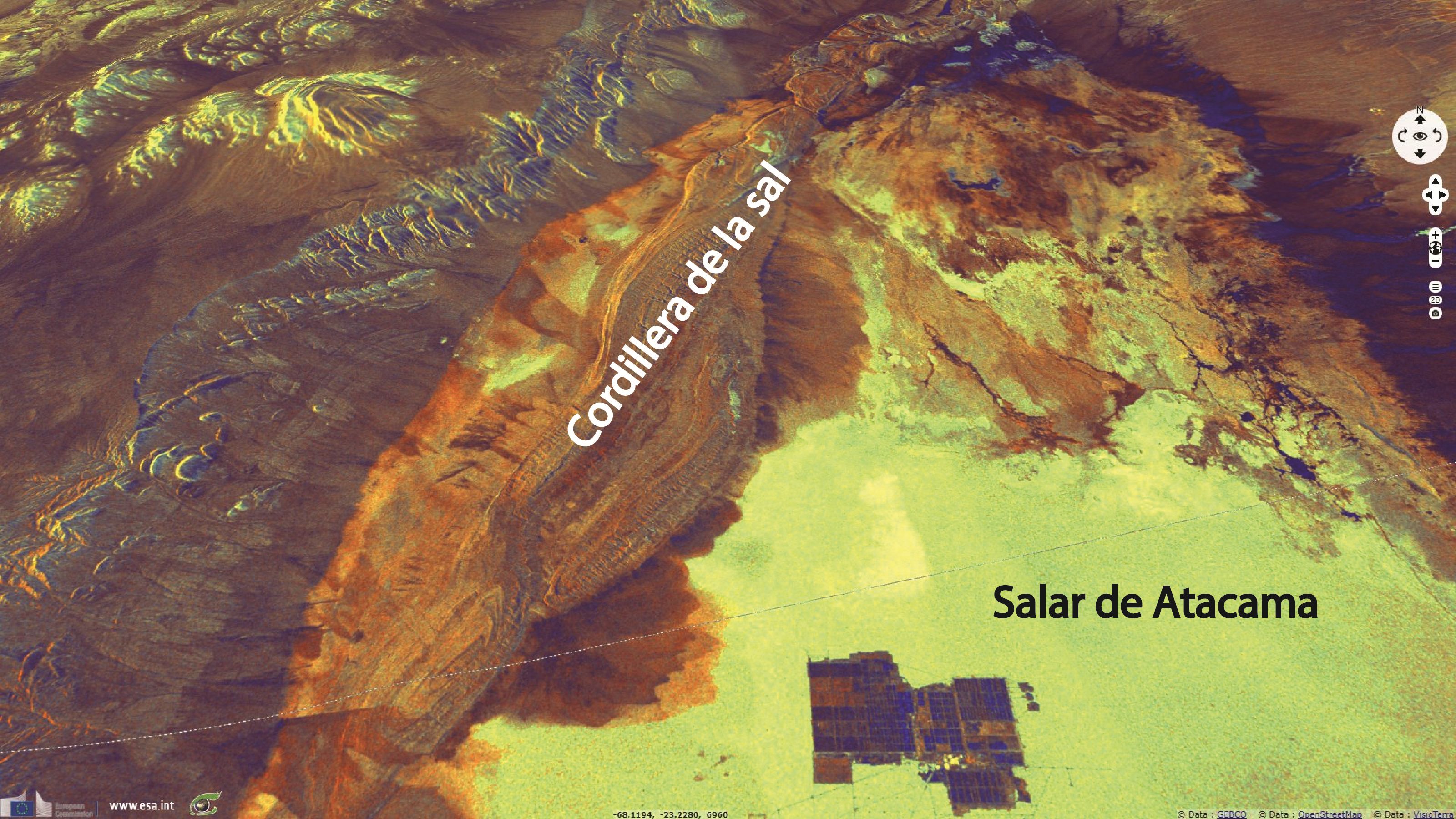 Pr. Jean Chorowicz said about this image: "The flat bottom of the Salar de Atacama Basin, 150 km long and 80 km wide, is at an elevation of ~2300 m. The early Miocene to Quaternary infill is 6 km-thick and composed of salt (halite) and ignimbrites associated to siliciclastic, carbonate or sulfate sediments. In the northwestern part of the basin (Fig. 3), the small Cordillera de la Sal is a complex recent tectonic fold-and-thrust belt, where Oligocene to Quaternary strata were deformed and uplifted for up to 200 m above the basin floor. The image shows the Cordillera de la Sal Quaternary fold and thrust belt. The bedding planes of the ignimbrites that shape fold closures of the tectonic belt are clearly visible. The young topography is poorly eroded due to the extremely low erosion and sedimentation rates in the hyper-arid climate. The structure connects in depth with a major reverse fault system known in a nearby seismic profile and testifies for recent activity of the Western Cordillera mountain front."
Fig. 4 - S2A - 11-8-2 colour composite – This shows a drainage network oriented both NW and SW.
3D animation 3D view 2D animation 2D view 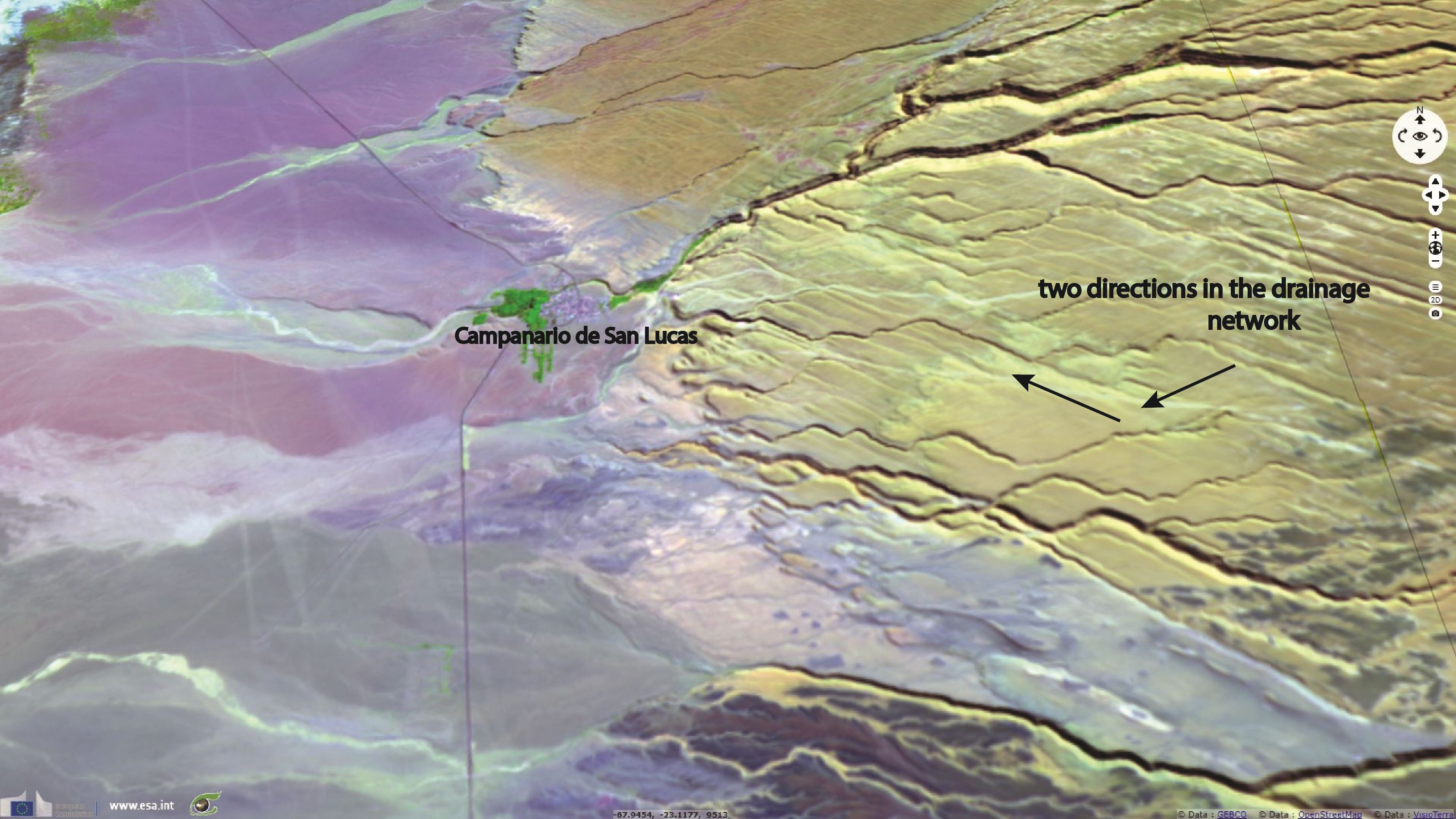 According to Pr. Jean Chorowicz: "Near the village of Campanario de San Lucas, large foothill ancient deposits in the Central Depression are burrowed by a drainage network showing two main directions trending NW or SW. The NW-trending valley segments reactivate faint ondulate surfaces that seem to result from paleo-wind effects. At regional scale these paleo-winds may have blown down from the cold high Western Cordillera to the NW into the depression. The SW trend is more enigmatic. It may follow the regional main slope of the topography."
Fig. 5 - S1B - Pampa de Tamarugal in the Central Depression.
3D view 2D view 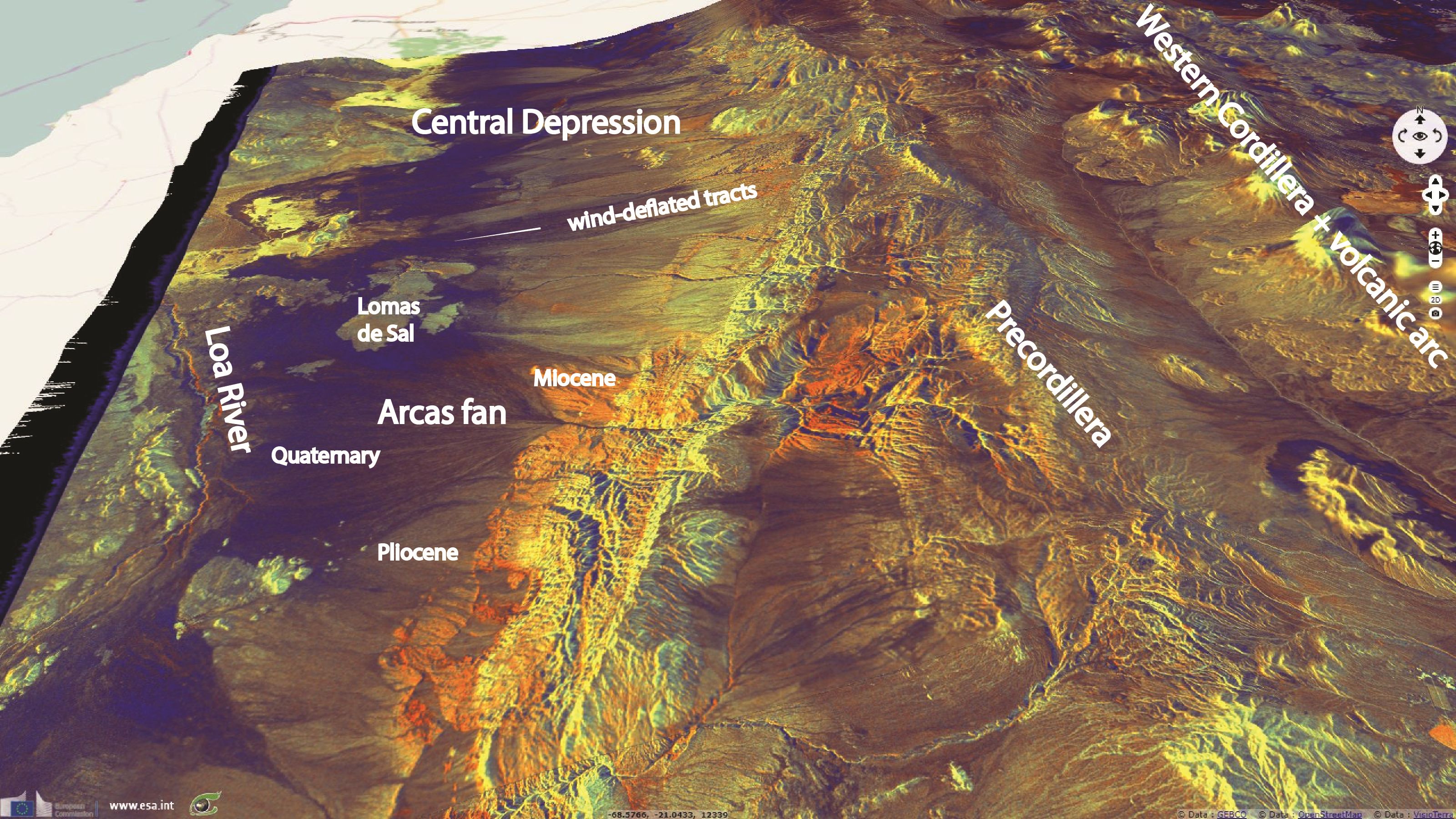 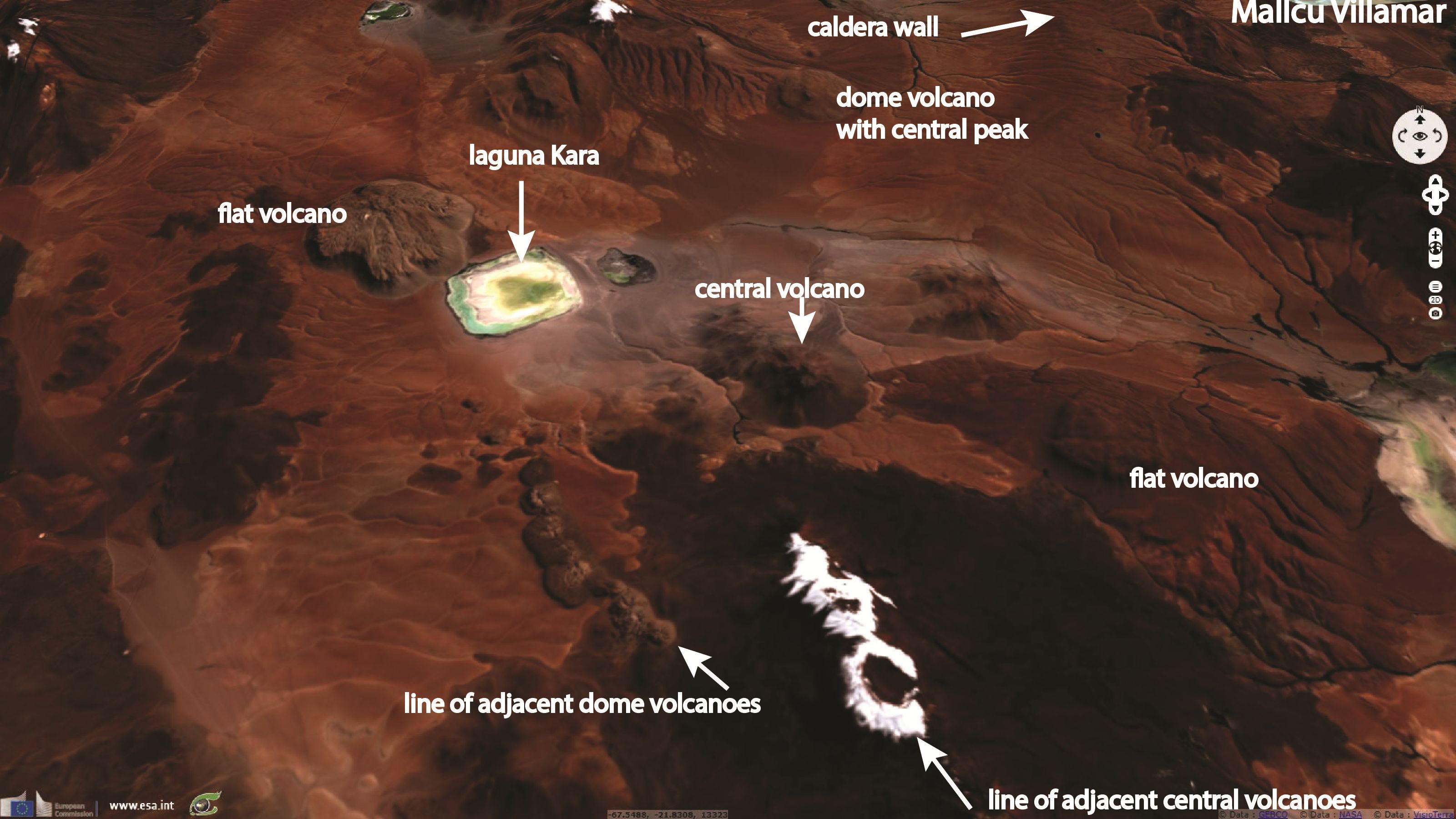 Pr. Jean Chorowicz added: "This volcanic landscape shows rocks colored in brown to black, nevados in white and salt lakes in white to green deposits. The area belongs to the volcanic arc (Western Cordillera), a consequence of the subduction of the Nazca plate. Central and dome volcanoes are frequent. Both may form aligned adjacent edifices related to the open fractures that have given way up to the magma. Along the line of adjacent dome volcanoes located south of Laguna Kara, each volcano is broken in the middle, showing the open fracture. Other volcanic domes are flat topped, somewhat different from those having a central peak. Such types of flat volcano are also found for instance in Iceland where they are considered to have erupted under glaciers. Volcanoes lying north of Laguna Kara are at the middle of a caldera which eastern wall is partly visible."
The views expressed herein can in no way be taken to reflect the official opinion of the European Space Agency or the European Union.
Contains modified Copernicus Sentinel data 2021, processed by VisioTerra.