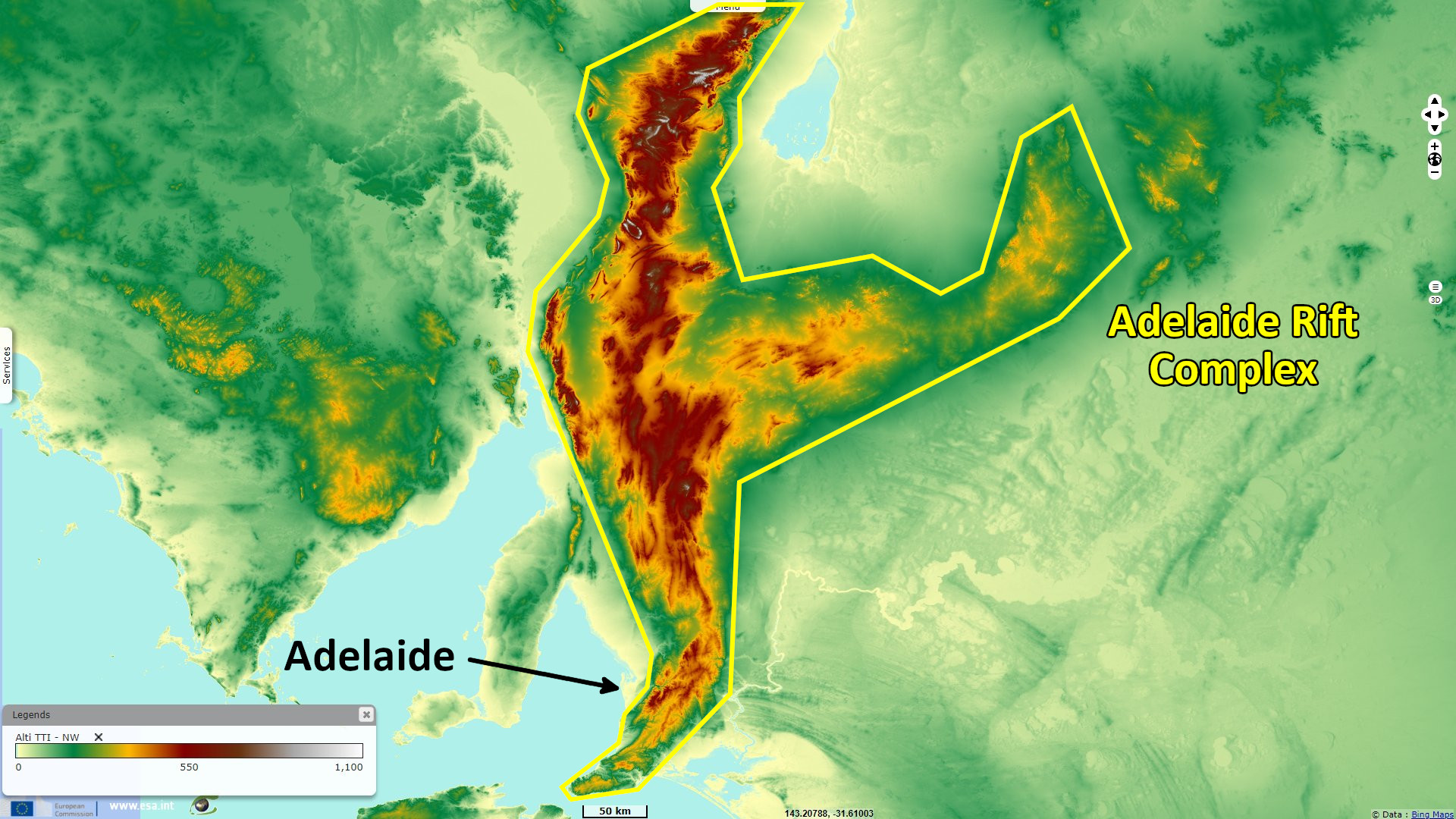 M. H. Monroe, author of the site Australia through time, describes the Flinders Ranges as follows: "The Flinders Ranges are a part of an upland system that stretches from the southern coast of South Australia to the Eyre Basin, about 600 km. The elevation of almost all of the ranges is above 300 m, and locally peak elevations exceed about 1100 m. The ranges extend from 300 km north of Adelaide for 400 km in a series of north-south trending strike ridges, intersected by many gorges. They act as refugia, rising from the arid plains, with rich biodiversity of plants and animals." "The rocks of the Adelaide Geosyncline that were deposited as sediment along a passive margin of the supercontinent Rodinia form much of the Flinders Ranges. About 540 Ma, in the Cambrian, the Delamerian Orogeny thrust up the rocks of the Adelaide Geosyncline, faulting and folding it to form a large range, the eroded remnants of which are now the Flinders Ranges. The rocks of the Ranges are mostly quartzites, limestones, shales and sandstones."
Fig. 2 - S3 SLSTR (03.01.2022) - Several large salt pans surround the Flinders Ranges in this endorheic basin.
2D view 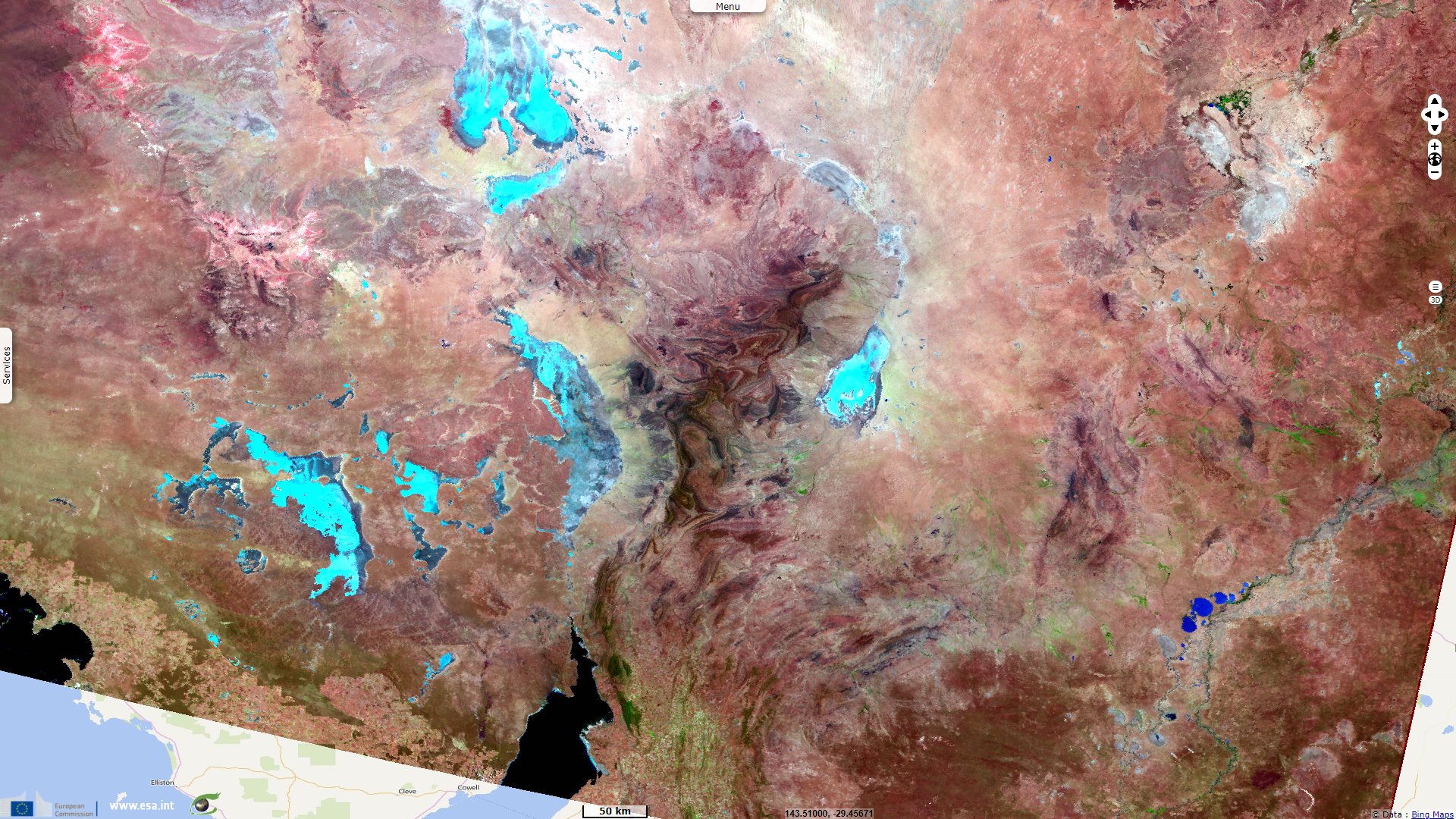 "The rocks composing the Flinders Ranges are believed to have been deposited in shallow seas between about 850 and 500 million years ago. The Adelaidean Sea, of similar size to that of the Mediterranean Sea, stretched into central Australia from Kangaroo Island. The subsiding sea floor was a depotcentre for the sediment from the eroding higher ground to its west. As the climate changed, so did the deposition of these sediments. The coarseness and colour of the alternating layers resulting from the climatic changes can now be read in the rocks, allowing a climatic history of the area to be read from the rocks."
Fig. 3 - S3 OLCI (11.01.2022) - The Flinders Ranges are the most striking feature in the ocres of the Adelaide Basin.
2D view 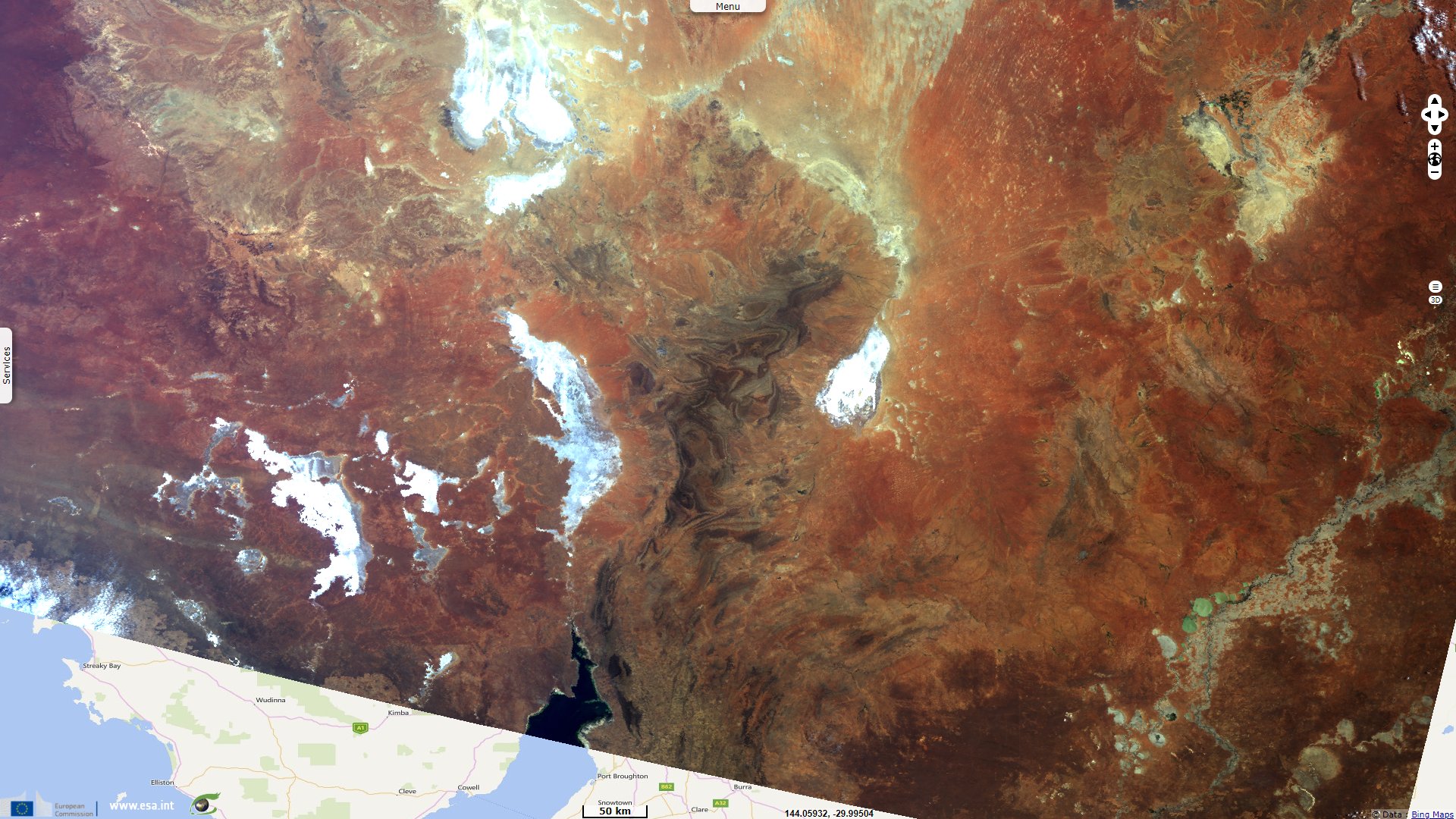 "About 600 million years ago, while Australia and Antarctica were still a single continent, the seafloor along their east coast began to plunge beneath them along 4000 km of their coastline. The mountain chain pushed up by this event ran the full length of the Gondwanan east coast. The mountain chain is now in 2 parts, the Transantarctic Mountains in Antarctica and the Flinders Ranges in Australia. During this process the entire eastern part of Australia was added to the much more ancient western section. For most of the length of the Flinders Ranges the rocks they are formed of were sediments that had been accumulating since before 1.0 billion years ago. The far northern end of the chain is composed of 1650 million year old granites and other crystalline rock."
Fig. 4 - S1 (17.02.2022->25.03.2022) - The exceptional value of the local geology has been well preserved from erosion by the low precipitation.
2D view 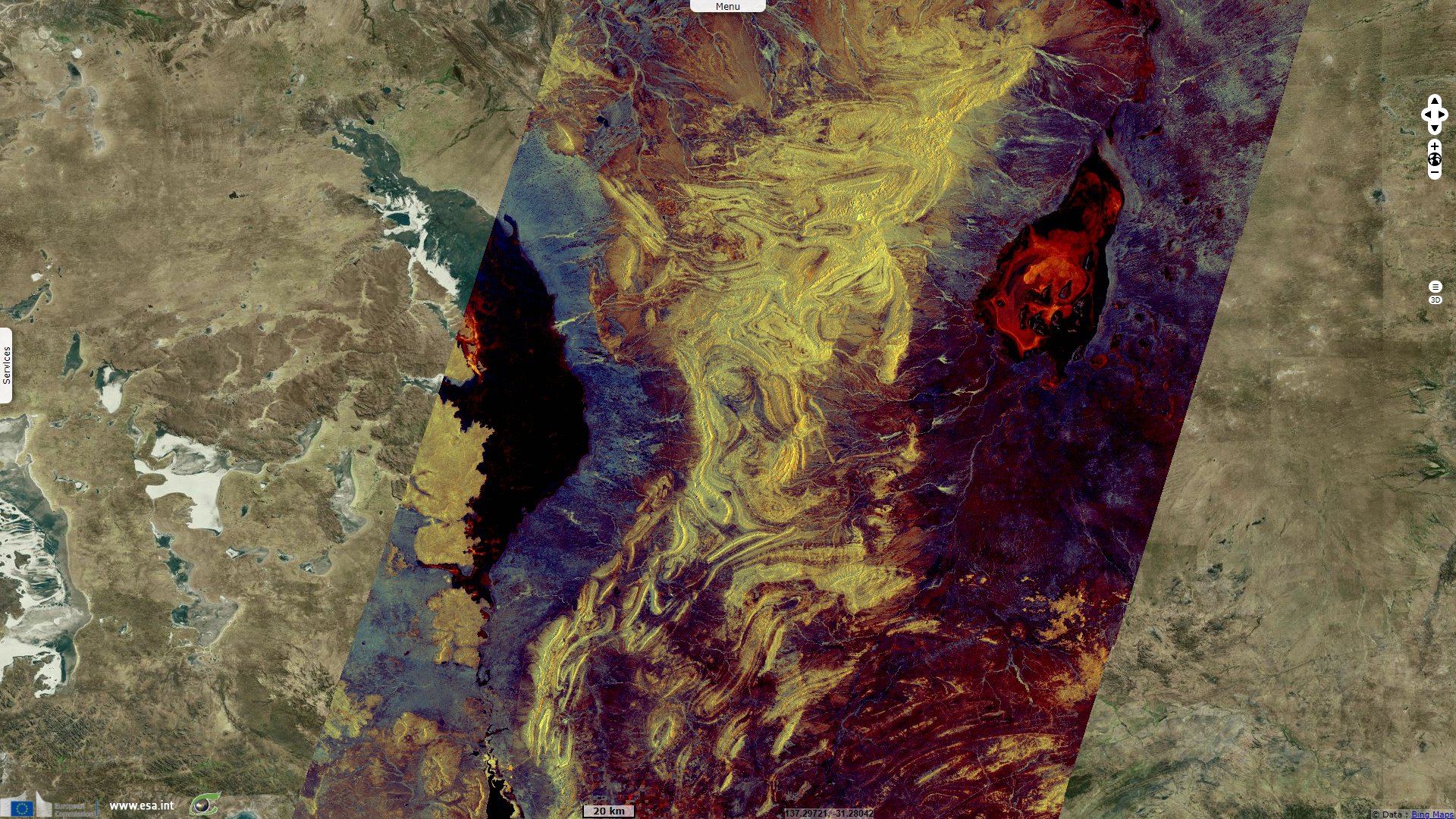 "At places in the Flinders Ranges, such as Tillite Gorge, evidence can be seen of the glaciation that covered much of Australia about 75 million years ago. At the northern end of the ranges the glacial deposits reach a depth more than 1/2 the height of Mt Everest. They were formed where glaciers dropped their load of rocks and rock powder when they reached the central seaway that covered the area at the time."
Fig. 5 - S3 OLCI (11.01.2022) - Due to the significance of this site, multiple locations have been designed as conservation areas.
2D view 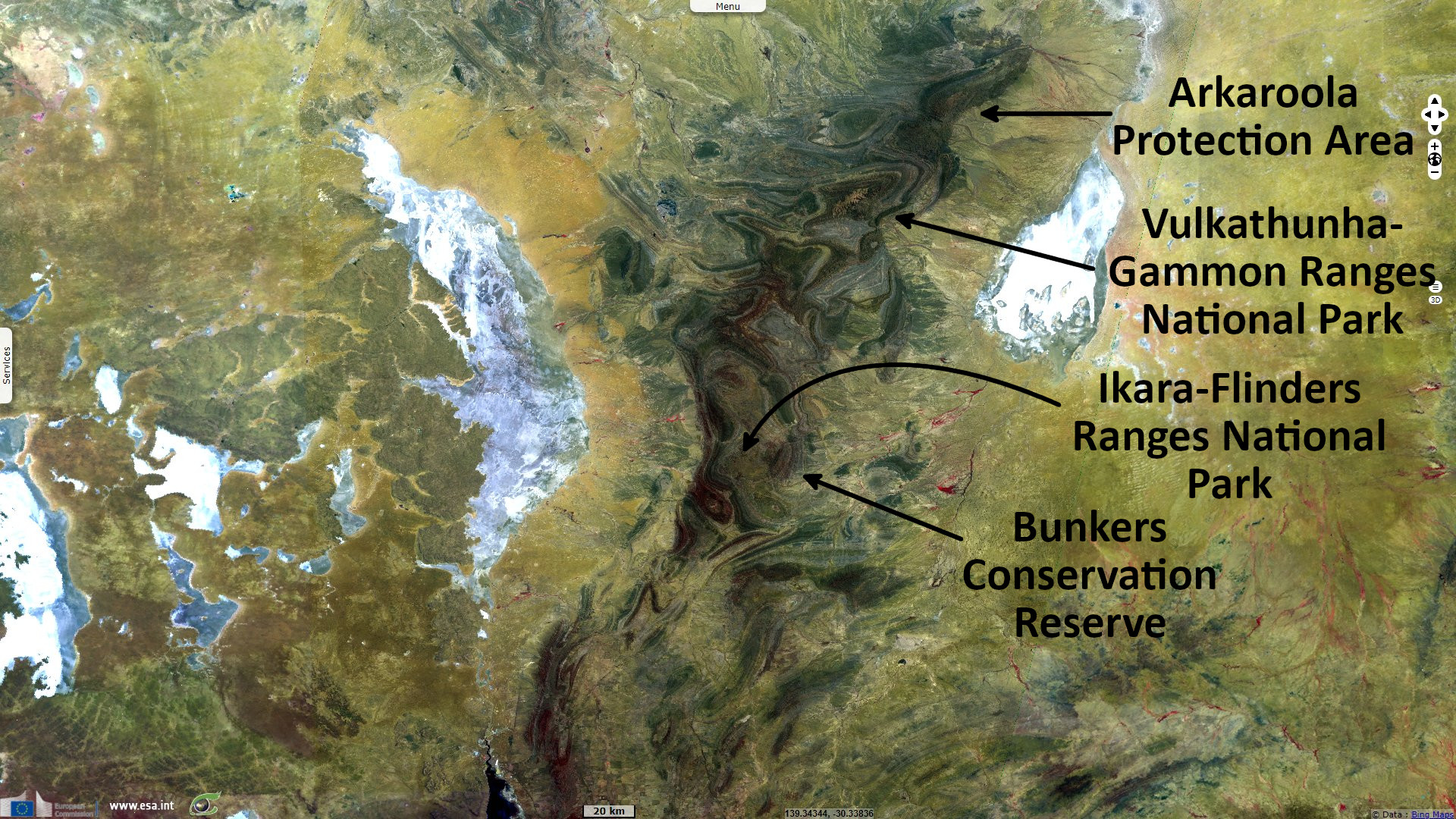 Australia wishes to add the Flinders Ranges to the list of UNESCO World Heritage sites, the sheet promoting the candidate site notes: "The Flinders Ranges, part of the traditional lands of the Adnyamathanha People, is a semi-arid mountainous landscape located 500 kilometres north of Adelaide, the capital city of South Australia. It is known for its outstanding aesthetic beauty, diverse landscapes and rich biodiversity, and exceptional scientific values."
Fig. 6 - S3 SLSTR + OLCI (11.01.2022) - OLCI and SLSTR have been mixed in this image and OLCI used for a pansharpening.
2D view 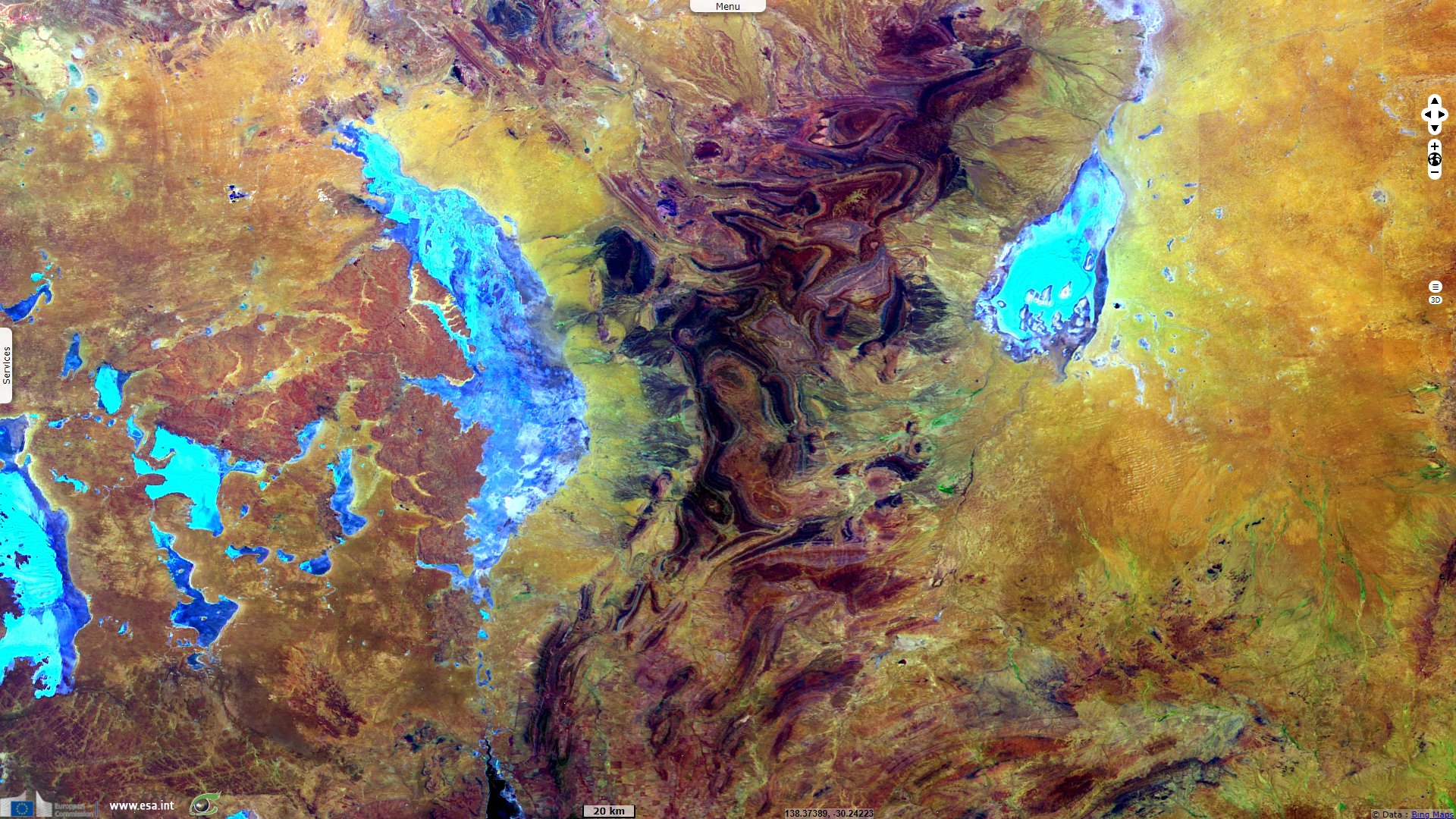 "The semi-arid landscape of the Flinders Ranges, with its limited vegetation cover, has ensured that geological successions are abundantly exposed and highly accessible for research. Additionally, moderate tectonic influences have presented these rocks as gently to steeply dipping strata, much like the pages in an ancient book. Geologists recognise that these rocks provide an exceptional record of a major stage in Earth’s history; literally, 'Archive Earth'. These rocks provide an exceptional depositional, tectonic and geothermal record of Earth history in a subsiding geological basin known as the Adelaide Rift Complex (Counts, 2017), which straddled Australia’s ancient continental margin, and spanned a 350 million year time period from the Neoproterozoic (850 million years) to the Cambrian (500 million years). This is the critical geological time-frame when complex, macroscopic (multicellular) animal life first emerged on Earth."
Fig. 7 - S2 (09.01.2022) - Spectacular succession of geological layers in Arkaroola Protection Area & Vulkathunha-Gammon Ranges National Park.
2D view 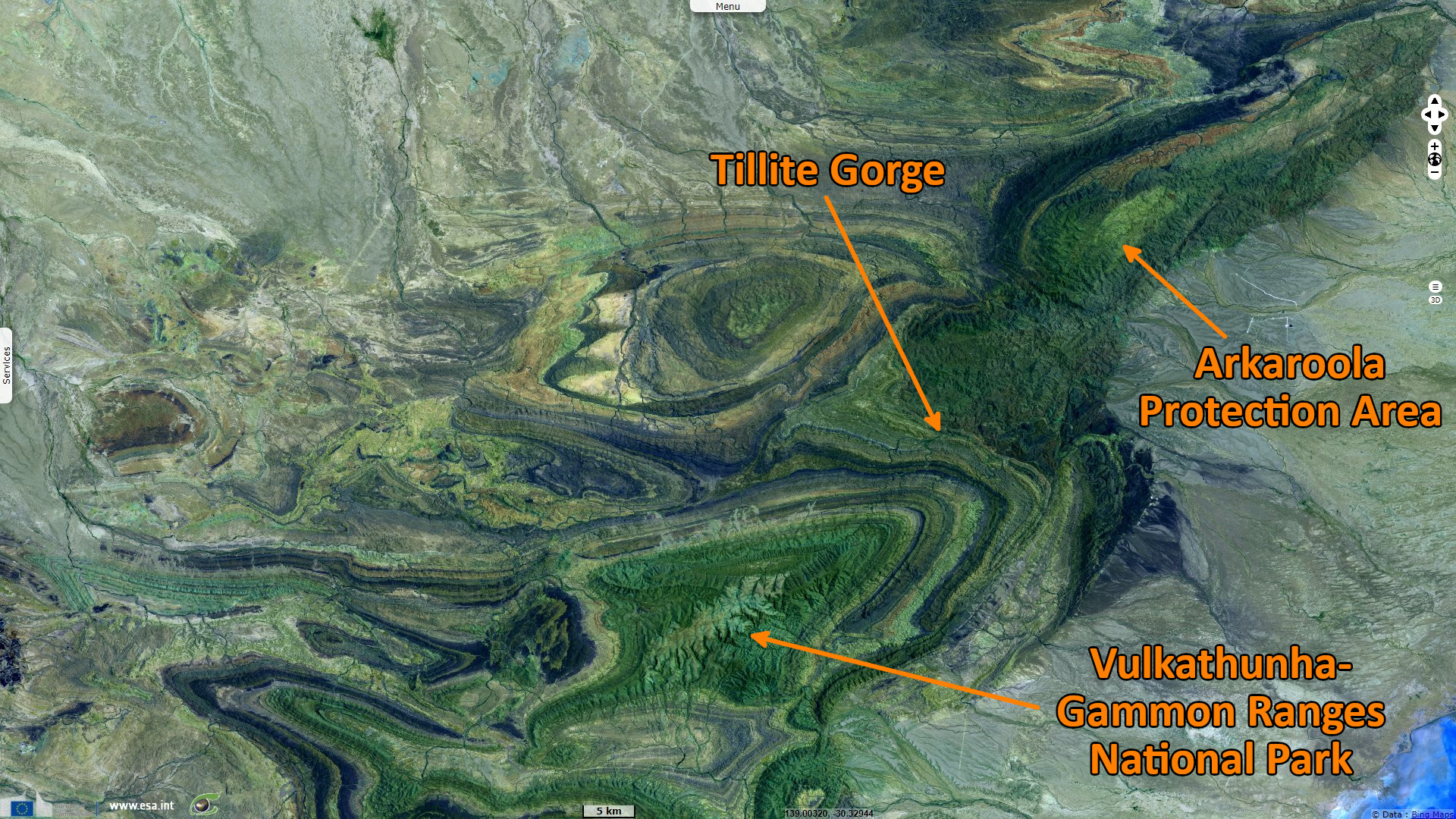 "The emergence and diversification of animal life was dependent on Earth’s changing climates and environments, which at times supported the emergence of animal life (habitable Earth conditions), and at other times, impacted and extinguished life. The remarkable archive of rock exposures in the Flinders Ranges record and present these dynamic environments in exceptional quality and clarity. At 672 million years, dramatic rock exposures at Tillite Gorge (Arkaroola Protection Area) present key outcrops that feature the Sturt glaciation, an intensely cold period of immense glaciation, which extended from the north pole to the south pole and has been described by some as 'Snowball Earth' (Hoffman et al., 2017). At 650 million years, the geological successions record warmer interglacial conditions with an ancient barrier reef forming; outcropping rocks located in the Arkaroola Protection Area and Vulkathunha-Gammon Ranges National Park, represent one of the oldest such reefs in the world. There was another massive climate swing 640 million years ago to the colder conditions of the Elatina glaciation, yet another episode of Snowball Earth."
Fig. 8 - S2 (09.01.2022) - Multiple geological events have happened in the history of these ranges.
2D view 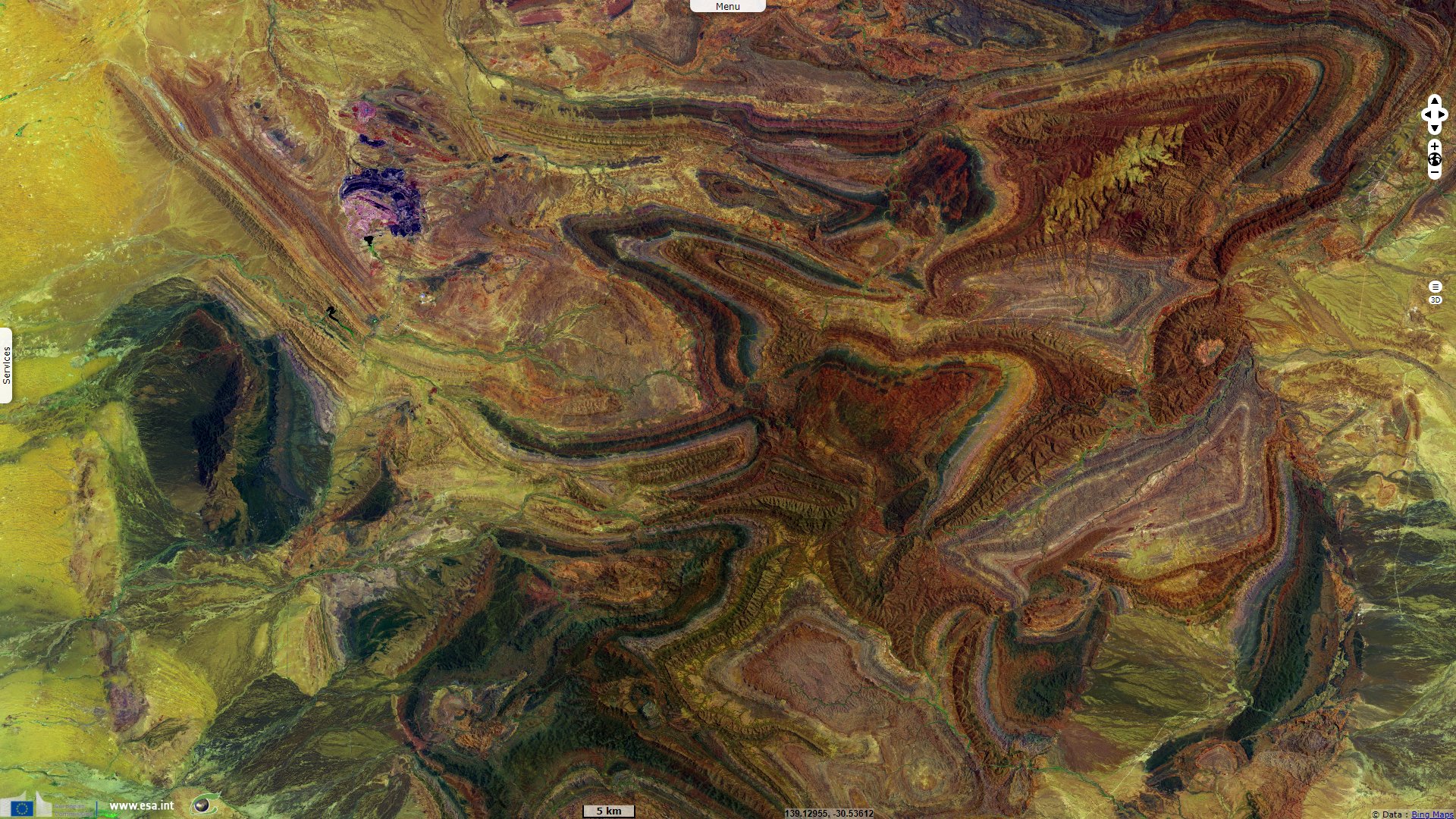 "Key exposures of this second global glacial event are preserved in the rock record outcropping in the Ikara-Flinders Ranges National Park and Vulkathunha-Gammon Ranges National Park. The rise of animal life is broadly associated with a gradual warming through the Ediacaran to a warm greenhouse climate in the early Cambrian (Hearing et al., 2018) as the Australian-Antarctica sector of East Gondwana straddled the equator (Brock et al., 2000). The emergence of macroscopic animal life is preserved in these rocks." "The fossil reefs are found foremost at Ajax Hill, which are widely acknowledged as some of the best preserved archaeocyaths on Earth (Kruse and Debrenne, 2020; Kruse in Brock et al., 2016), as well as at Brachina Gorge in Ikara-Flinders Ranges National Park, and at Angorichina (Jago et al., 2020)" "The earliest life forms in the Cambrian, including early burrowing trace fossils and Ediacara-like body fossils found at Castle Rock at Maynards Well." "The superbly exposed strata from the Bunkers Range on Angorichina also host well preserved and diverse species of brachiopods, palaeoscolecid worms, bradoriid arthropods, and molluscs." "The unprecedented excavation of nearly 40 fossiliferous beds representing multiple different environments and revealing tens of thousands of extremely well-preserved and diverse fossils at the Nilpena Ediacara fossil site."
Fig. 9 - S2 (09.01.2022) - A multitude of fossils have been found, attesting the early presence of macroscopic animal life.
2D view 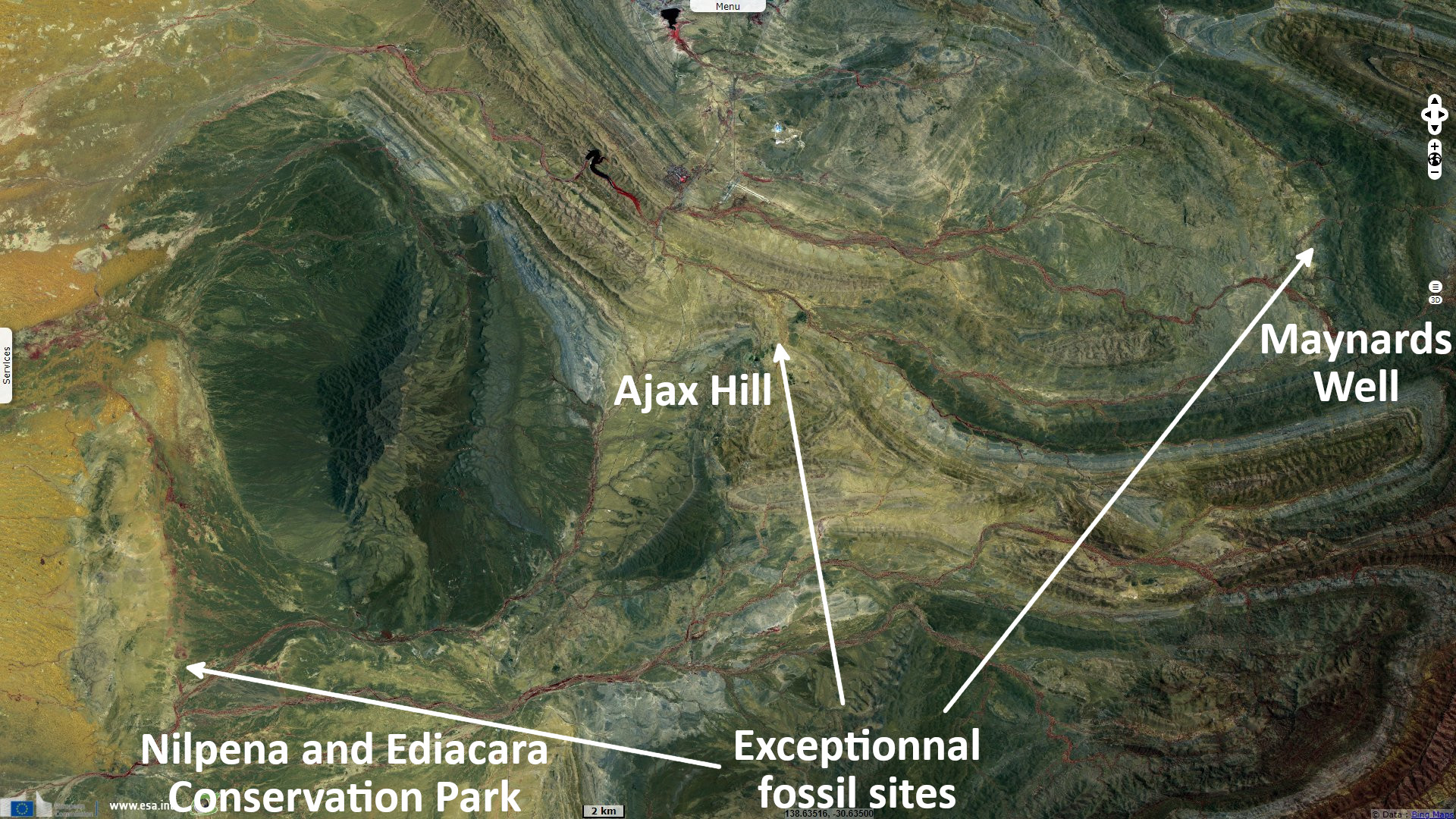 "What caused these wild climate swings? Volcanicity, its gas emissions and the interaction between volcanic rocks, the atmosphere and life forms, controlled the abundance of carbon dioxide and oxygen levels in the atmosphere, resulting in fluctuating greenhouse and non-greenhouse conditions. While volcanic activity generally increased carbon dioxide levels over time, unicellular and photosynthetic cyanobacteria (prokaryotes) consumed it and generated oxygen as a waste product. These prokaryotic cells are not animals as they do not contain a distinct nucleus – but they are thought to be the first living organisms on Earth. Their activity diminished Earth’s greenhouse effect that kept the planet warm. Other living organisms with more complex cells, including a defined nucleus (eukaryotes), also contributed to the generation of atmospheric oxygen at this time. Habitable Earth conditions suitable for animal life were sometimes present, but often short-lived during these wild climate swings."
Fig. 10 - S2 (09.01.2022) - Mixing SWIR, NIR and visible bands reveals the varied strata visible from the sky.
2D view 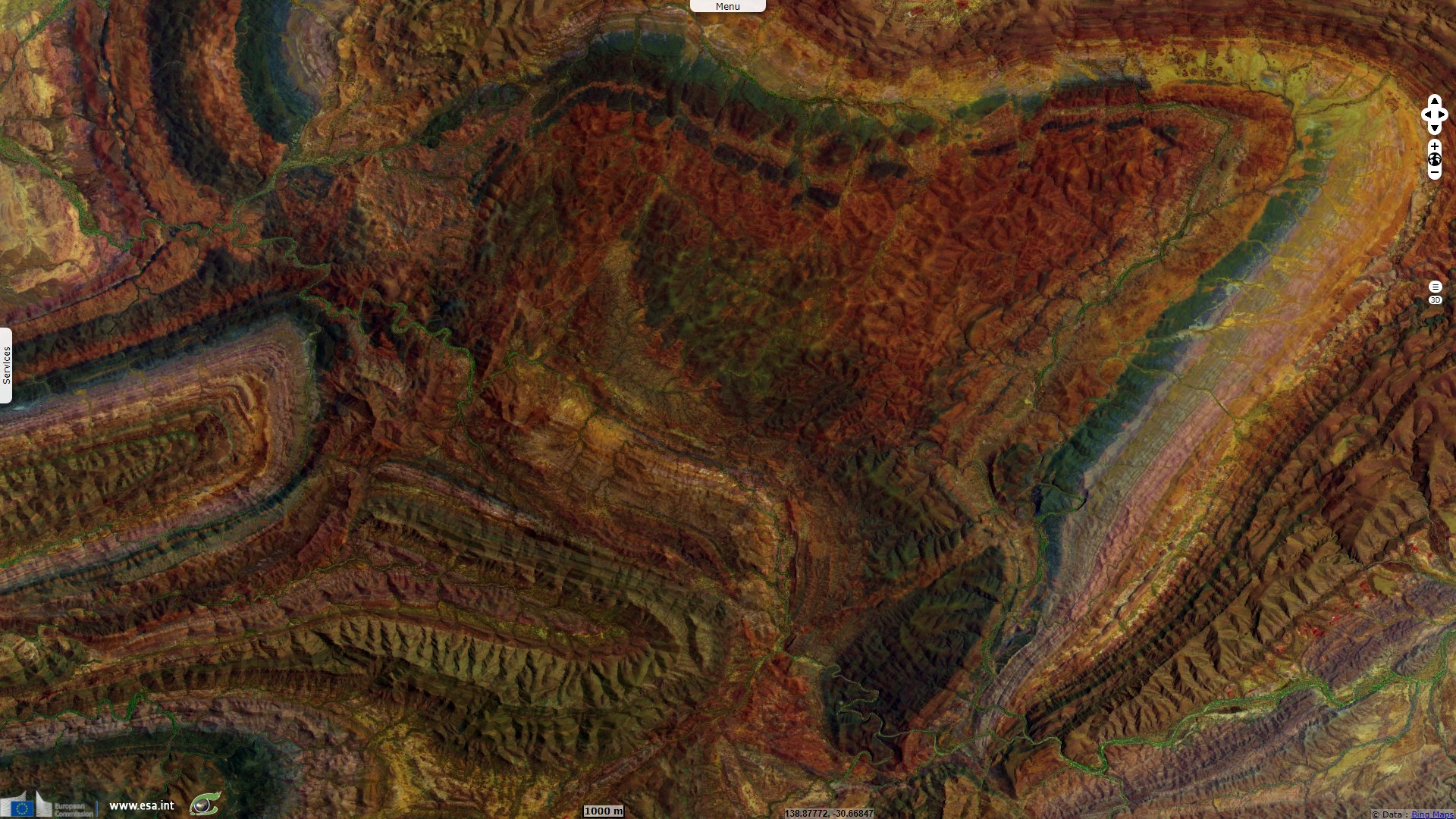 "For this critical 350 million year major stage in Earth’s history, there is no other place on Earth where there is a near-continuous succession of highly accessible strata. The emergence of complex life is recorded in the Flinders Ranges rock sequences, in particular at three critical intervals. The oldest example of complex life is presented by the enigmatic “sponge-like” organisms from the deep-water settings at Arkaroola Reef; followed by the remarkable Ediacaran radiation event, the advent of new animal body plans revealed in the emergence of tens of genera identified at the Nilpena site and preserving the advent of mobility and scavenging; and finally the famous Cambrian explosion of animal life, the crucible for the emergence and diversification of most animal phyla alive today; and the intricate interactions (eg. biomineralization, predation, and burrowing) associated with this rise in ecological complexity. All of these biotic milestones are remarkably well preserved in the Flinders Ranges."
Fig. 11 - S2 (09.01.2022) - These complex interweaving fold draw a colourful landscape.
2D view 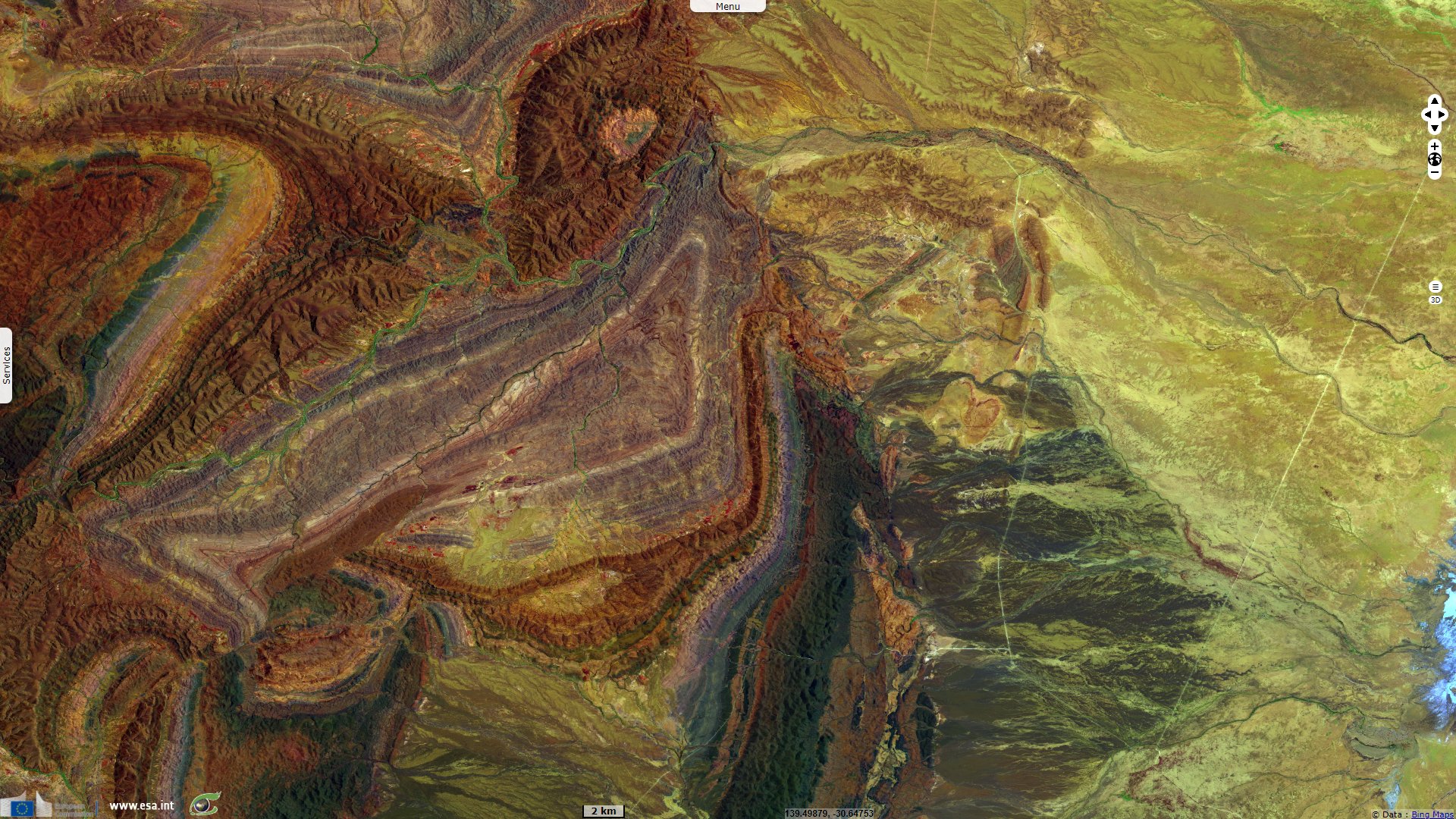 "The World Heritage narrative, the 'dawn of animal life' is presented sequentially from the oldest Adelaide Rift Complex rocks (850 million years ago) to the youngest (500 million years ago). The basement rocks to the Adelaide Rift Complex are also described, and comprise unusual, radiogenic or naturally radioactive Mesoproterozoic granitic rocks (ca. 1,580 million years old) that give off radiogenic heat. This trapped heat below a great thickness of accumulating sediments is thought to have influenced the formation of the Adelaide Rift Complex through mini-tectonic episodes and associated diapiric intrusions."
Fig. 12 - S2 (09.01.2022) - Ikara-Flinders Ranges National Park & Bunkers conservation area in the Central Flinders Ranges..
2D view 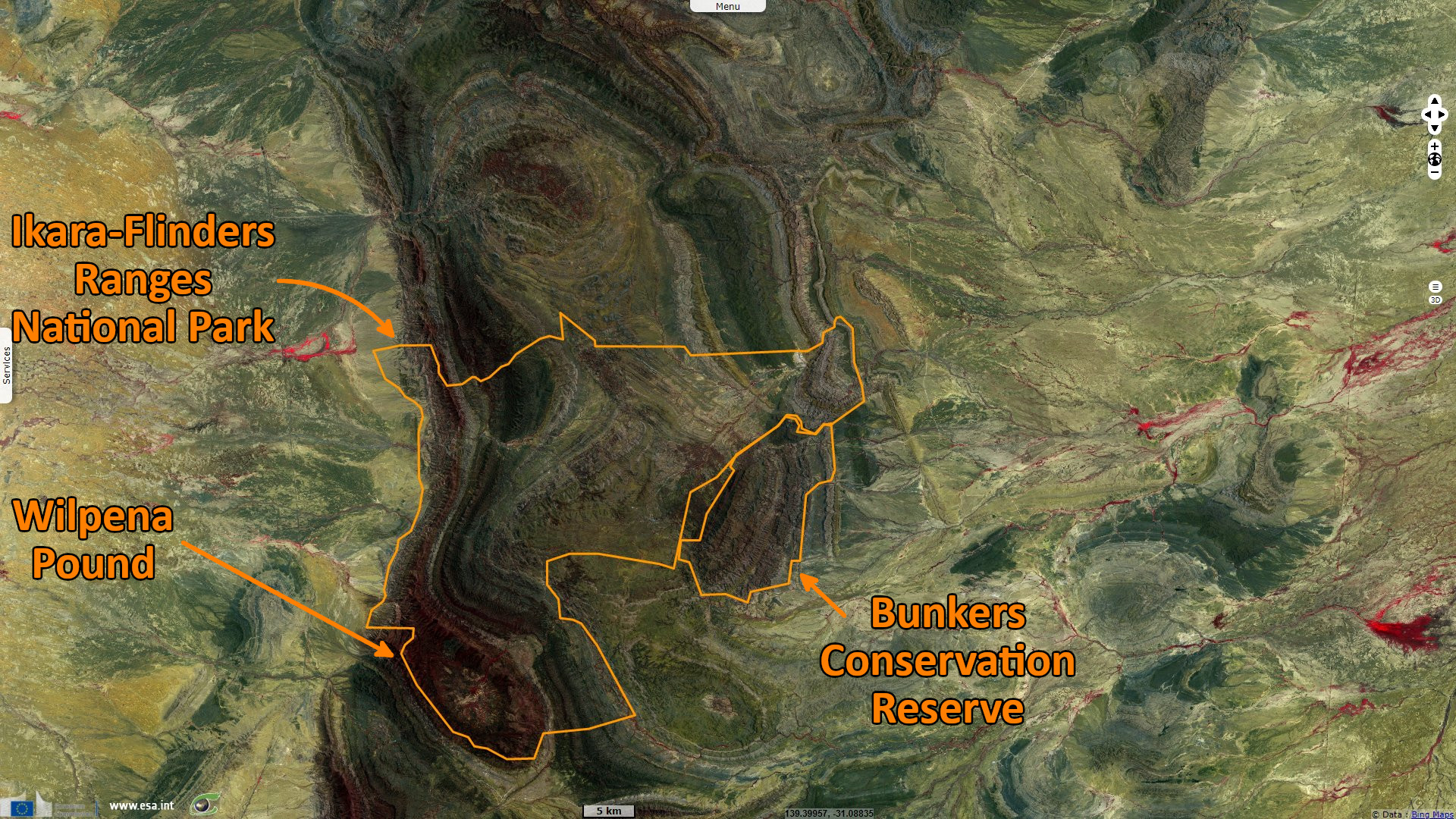 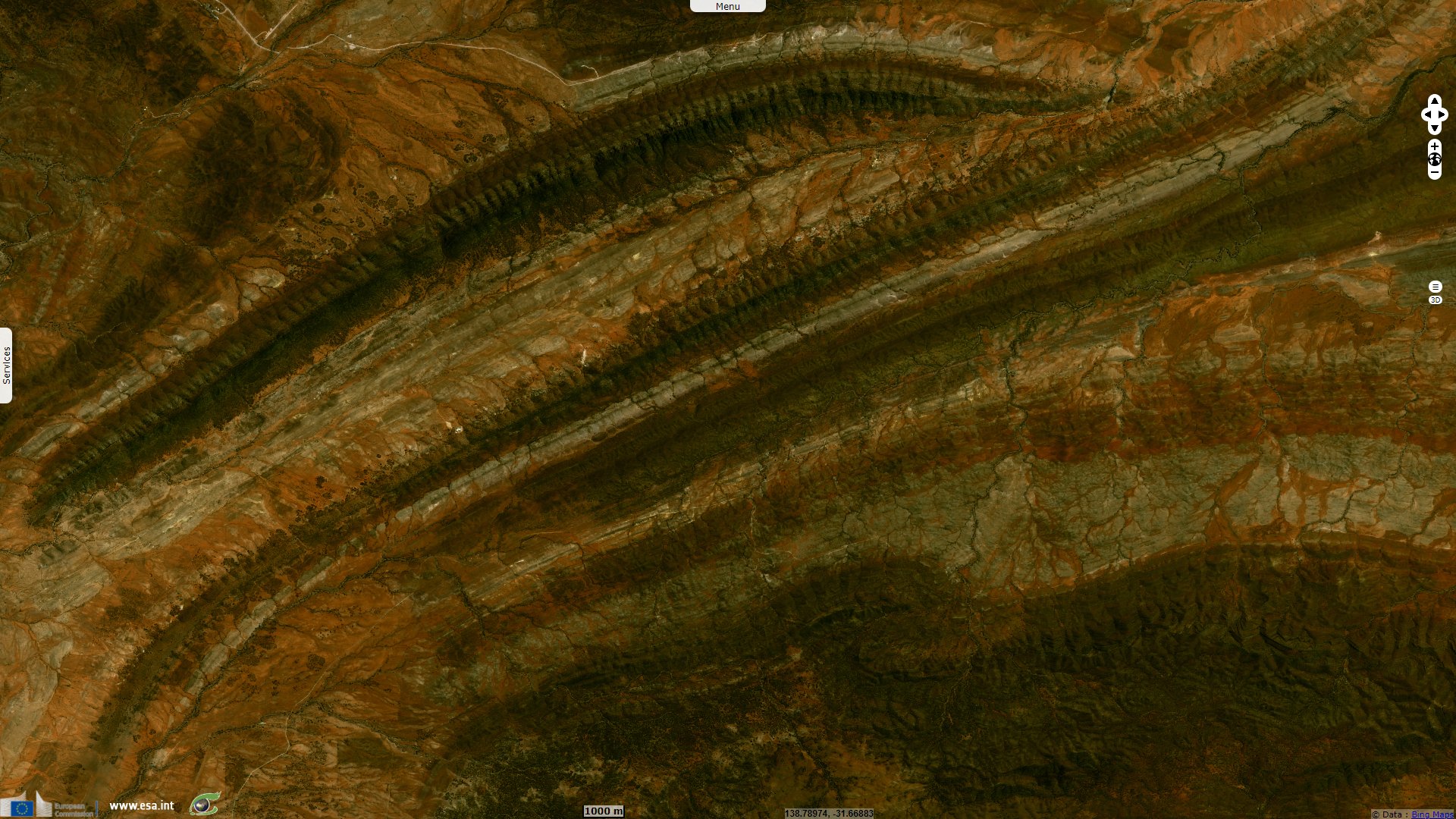 "There is nowhere else on Earth that presents in one stratigraphic sequence and with such high quality and accessibility, this major stage of Earth’s history, 'the dawn of animal life', with its climates and environments including the three emergent animal life events in the Neoproterozoic and Phanerozoic. The first animal life event, the enigmatic sponges of Arkaroola Reef, is relatively new to science. The next two animal life events, the remarkable diverse Ediacaran radiation event and the emergence of life forms in the Cambrian, including the advent of deep burrowing and extensive framework reef-building animals, represent the world’s finest known examples of these life forms."
Fig. 14 - S2 (09.01.2022) - Multiple syncline folds at the southern part of the range
2D view 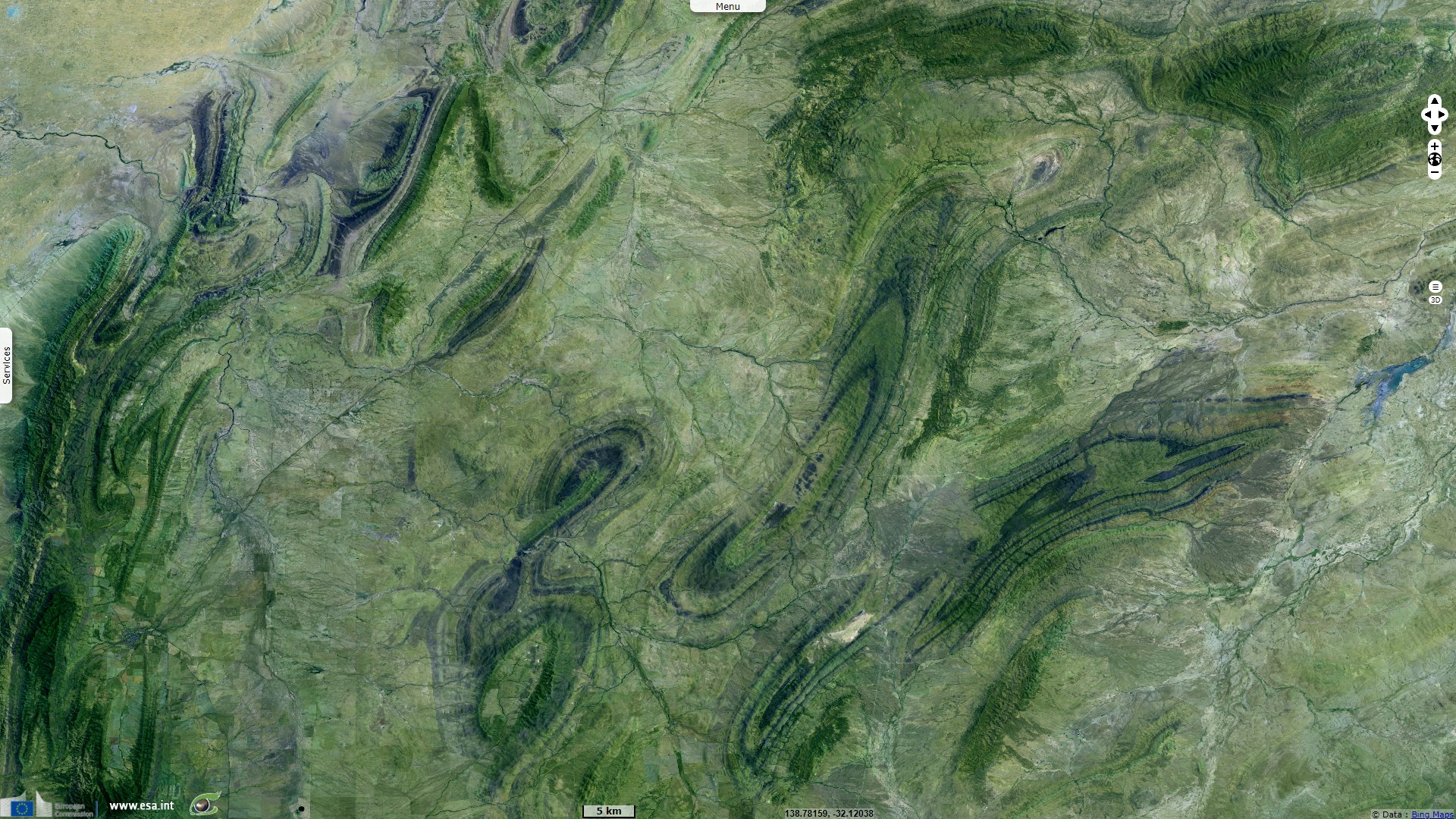 "The effectively continuous 350 million year stratigraphic sequence of the Adelaide Rift Complex extending from the Neoproterozoic to the Cambrian is a major stage in Earth’s history recognised as the 'dawn of animal life'. The evidence for the Flinders Ranges World Heritage narrative is sourced from 34 outstanding geological sites (elements) located in seven geographic areas (component parts) in the central and northern Flinders Ranges. Included in the Arkaroola Protection Area component part are the Mesoproterozoic basement “hot rocks”, due their contribution and influence during the 350 million year formation of the nominated stratigraphic sequence of the Adelaide Rift Complex and their subsequent protracted influence in the region."
Fig. 15 - S2 (09.01.2022) - Swirling patterns of folds in the north-west tip of Adelaide Rift Complex.
2D view 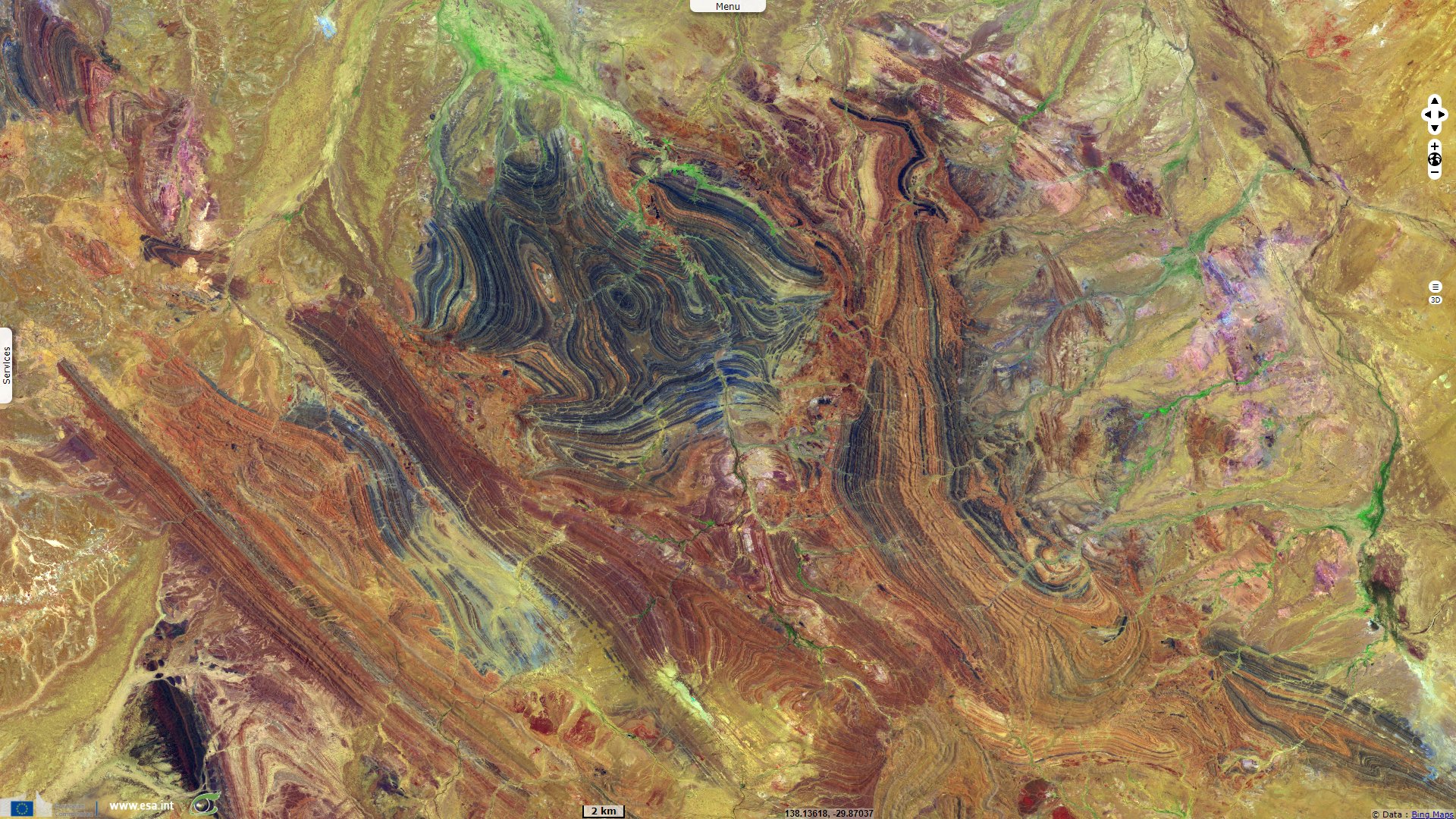 "The Flinders Ranges geological successions present this major stage in Earth’s history through remarkable rock exposures across breathtaking landscapes. This includes evidence of the two greatest ice ages recorded on Earth (the earliest of these, the Sturt ice age is presented at Arkaroola Protection Area by one of the finest and largest glacial deposits known anywhere on Earth); a superbly preserved Neoproterozoic barrier reef at Kingsmill Creek Gorge, also at Arkaroola; the exceptional seafloor bedding layers that preserve the Ediacaran fauna at Nilpena and Ediacara Conservation Park, along with the dipping Ediacaran sequences at Brachina Gorge; and the grand Castle Rock preserving the earliest Cambrian sediments and first evidence of complex animal burrowing."
The views expressed herein can in no way be taken to reflect the official opinion of the European Space Agency or the European Union.
Contains modified Copernicus Sentinel data 2022, processed by VisioTerra.