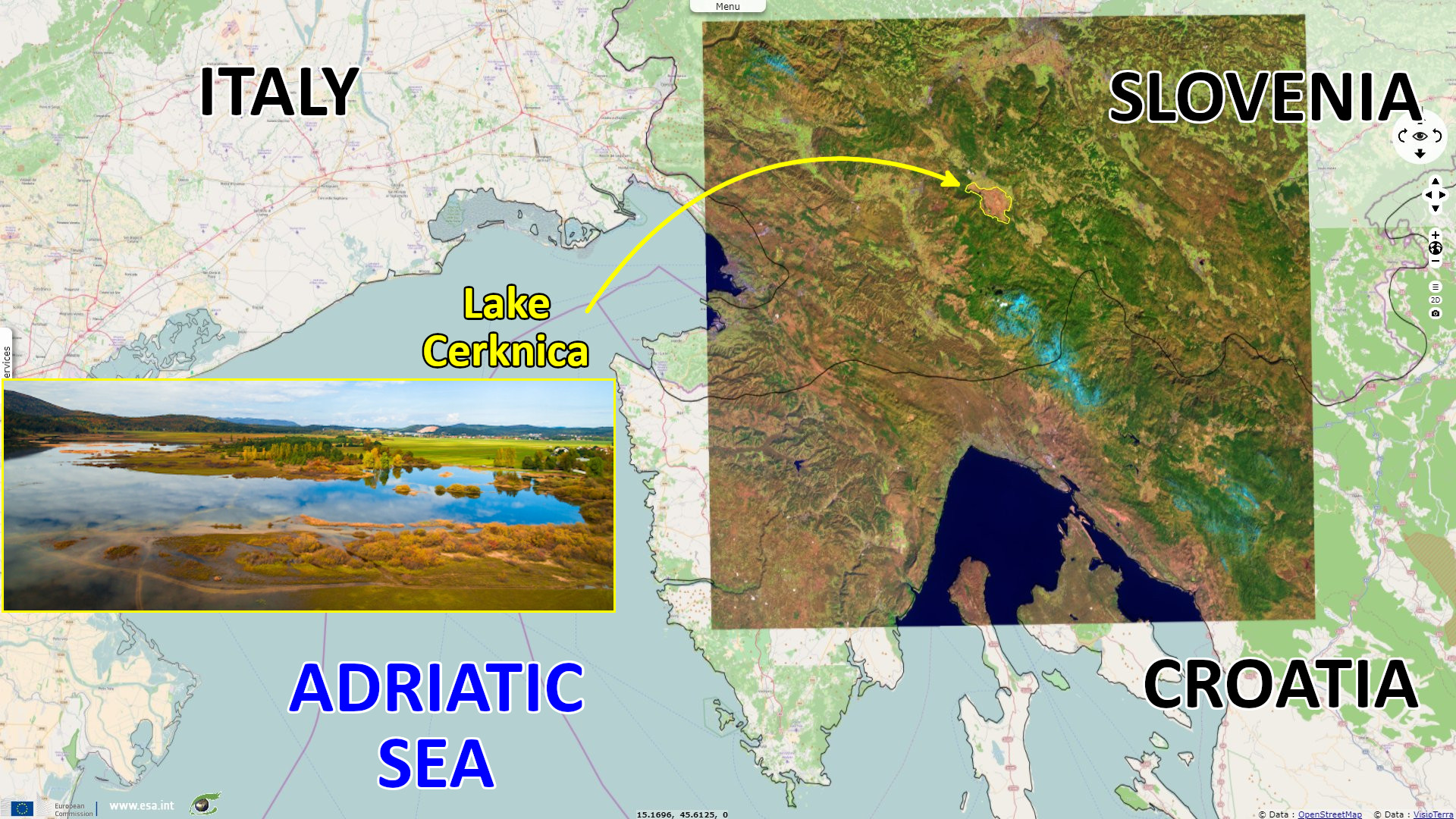 Lake Cerknica is an intermittent lake, it is located in a floodplain above a karstic depression, connected to the phreatic zone via an underground network. At its maximum extent, it is also a shallow yet the largest lake of Slovenia. It is an important area for biodiversity, its Ramsar information sheet is describes this wetland as follows: "The largest and most typical intermittent karst lake in its region. It is formed during rainy periods when the volume of water can no longer be drained through sinkholes, and the lake has no surface outflow, discharging exclusively underground. Numerous picturesque karst phenomena, such as karst sources, estavelles, ponors and ponor caves, abound, and the Kri~na cave is renowned for its underground lakes; the Rakov `kocjan valley, formed by the collapse of ceilings of underground caves, and the River Rak are fed mainly by water from the lake."
Fig. 2 - S2 (27.10.2021) / S1 (26.10.2021) - At its driest, only small dolines remain in the flood plain.
3D view 3D view 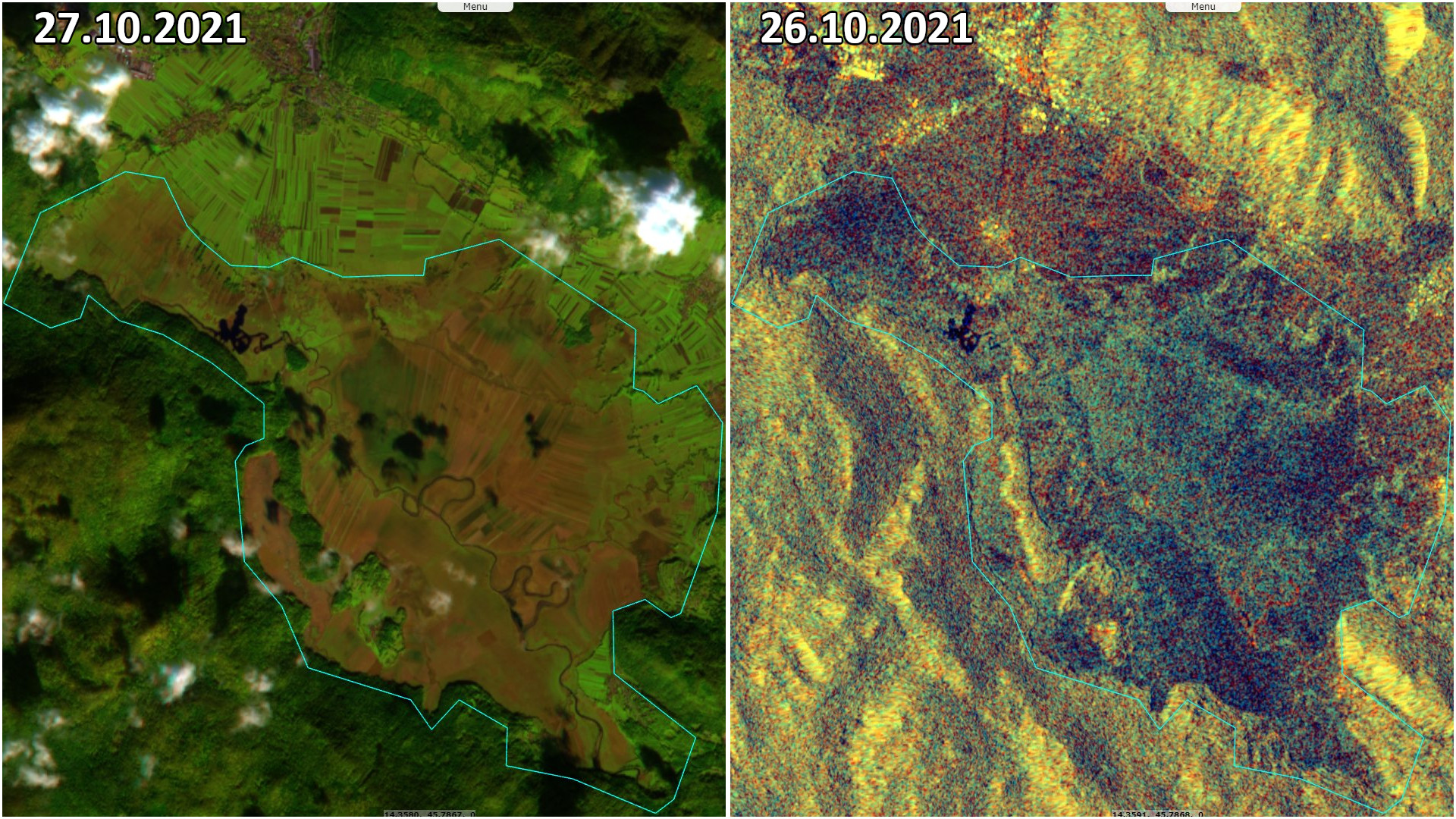 "Cerkniško jezero is part of the River Ljubljanica catchment area; it has no surface outflow; instead, all its waters discharge exclusively underground. A lake is formed during periods of rain when the large quantity of water can no longer be drained through the system of sinkholes. Through the middle of the polje flows the main water current Stržen which takes rise in the karst sources of Obrh and Cemun nearby the Gorenje jezero village at SE of Cerkniško jezero; the two sources bring water from Loška dolina where the River Loški Obrh sinks in the karst cave Golobina adjacent to the Dane village. In the north, the bottom of the lake is built of impermeable dolomite while in the southeast it is of cretaceous limestone which is more soluble in water and allows development of karst phenomena. In addition, there are many fractures in the bottom, with the largest of them located at the junction of the dolomite and limestone formations."
Fig. 3 - S1 (13.12.2021 / 25.12.2021) - The shallow lake can extend up to 38 km² with a maximum depth of 10 m.
3D view 3D view 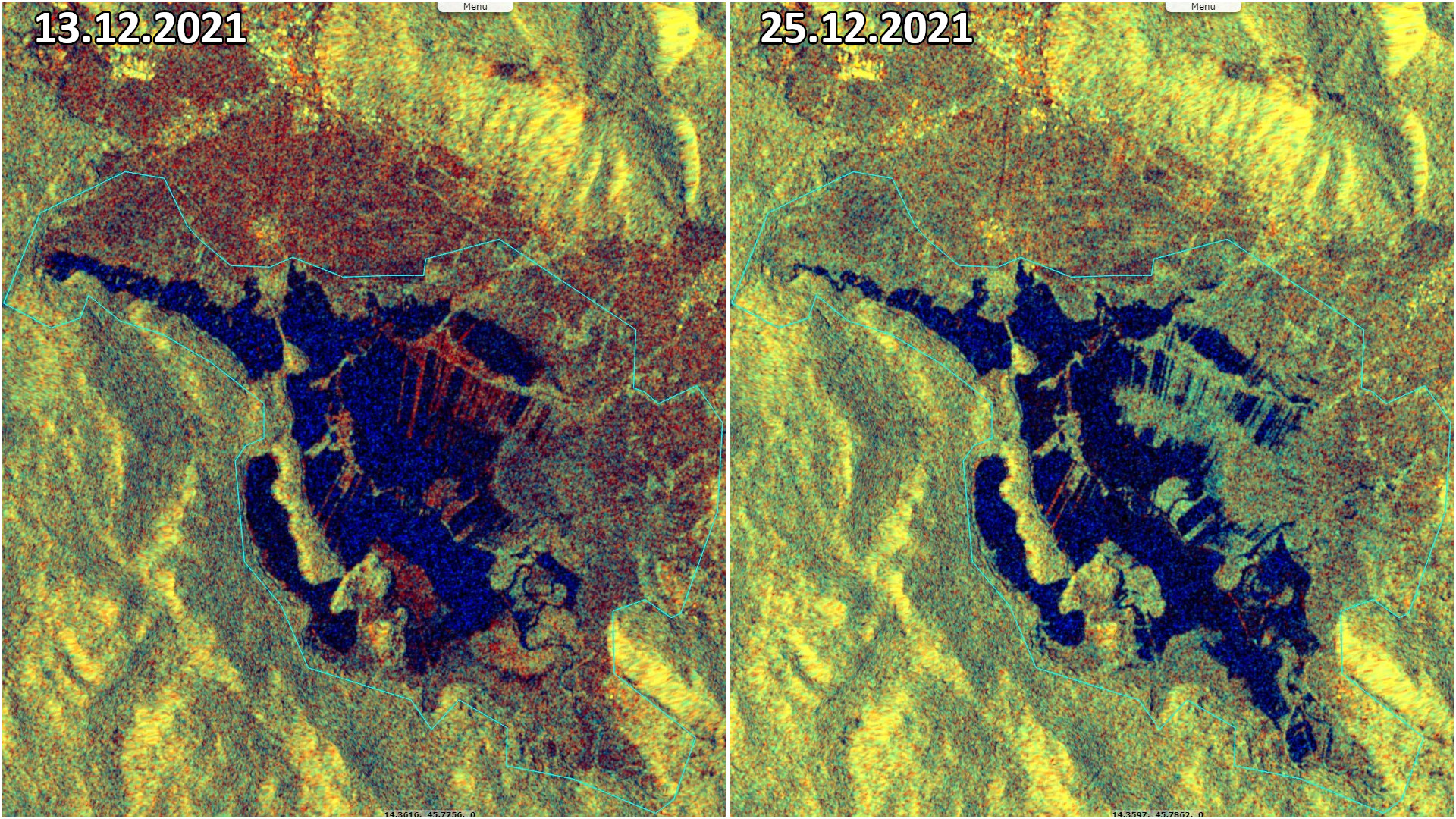 "The bottom of the lake is covered with quaternary and holocenic alluvial deposits. Across the dolomite bedrock on the NW flows the Cerkniščica, which has deposited a large amount of material so the area is slightly elevated above the rest of the lake. The thickness of the deposits that form the nowadays Cerkniško jezero varies across the area, ranging between four to ten metres. Locally, thickness may reach up to sixteen metres. Lake deposits consist mainly of loam (often carbonate), clay and sand."
Fig. 4 - S2 (26.03.2022) / S1 (31.03.2022) - By the end of March, the lake had returned to a near minimal water cover.
3D view 3D view 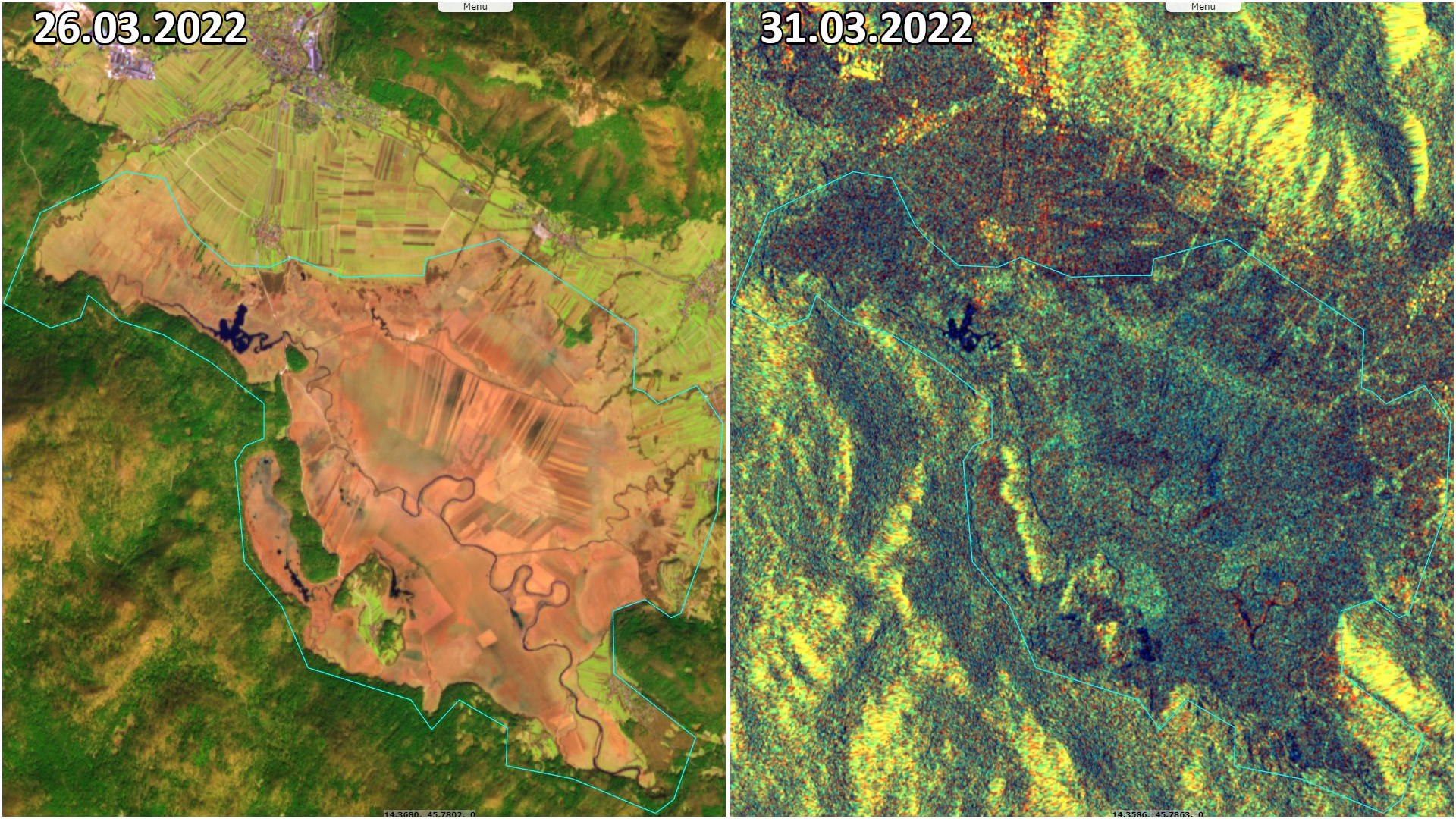 "The max. outflow of water through the underground channels of the Velika Karlovica and Mala Karlovica sinkholes ranges between 40 and 55 m3/s. The max. total inflow to the polje may reach up to 240 m3/s, while the outflow is limited to 40–90 m3/s. When at full size, the surface area of the lake ranges between 26 and 33 km². The elevation of the water table oscillates between 547.5 and 553 m asl. The water of the Cerkniško jezero has high hardness and alkalinity (pH ranging between 7.5 in 8.5). Researches have shown that it is only slightly nutrient-laden (nitrogen and phosphorus). When Cerkniško polje, covered with rich wetland vegetation, is flooded, it acts as a natural purification system. During periods of drought, its waters are more burdened. Then the self-purifying capacity of the remaining water bodies may be exceeded. The laden water drains underground where it spreads in an uncontrolled way through subterranean channels."
Fig. 5 - S2 (10.04.2022) / S1 (12.04.2022) - Not even two weeks later, the surface largely increased after a snowfall.
3D view 3D view 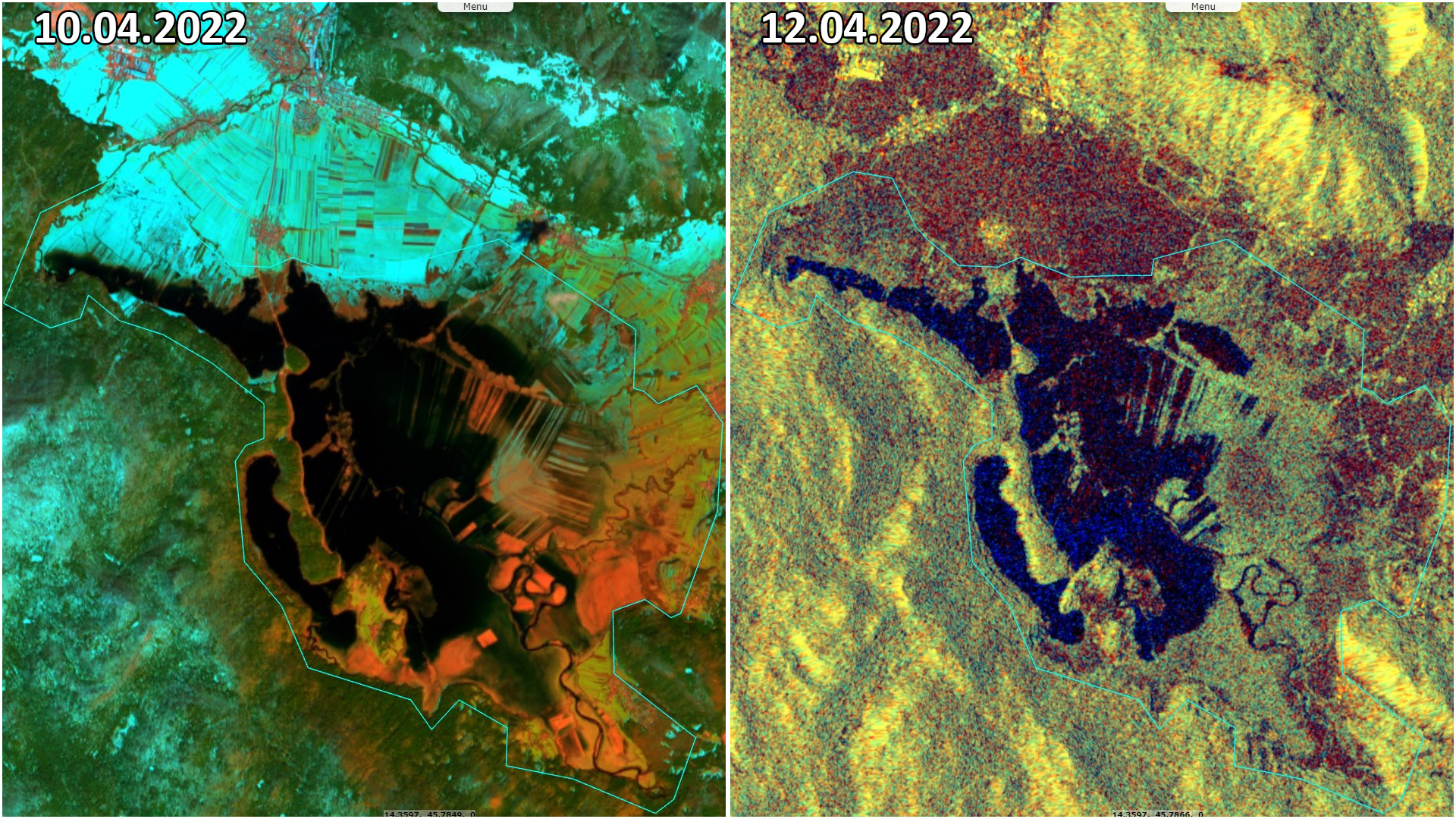 "There are not many sites in Slovenia and not even in Europe where so many bird species could be found in an area of such a small size. Until now, 256 birds species have been identified there, and for some 100 species of these, the area is a nesting site. The lake is the only nesting site in Slovenia for the red-necked grebe, the redshank and the ferruginous duck as well as a breeding place for the corncrake. The white-tailed eagle can be seen here all year round; even though Cerkniško jezero has not been confirmed as its nest site yet it is very important for this species as it is by far the only sustenance zone that is large enough. It is also a habitat of the most important and largest nesting population of the yellow wagtail, and the reed bunting. The quality of habitats as nesting grounds for birds depends on the floodwater elevation and dynamics."
Fig. 6 - S2 (14.06.2022) / S1 (23.06.2022) - The lake almost disappeared again during a part of the summer.
3D view 3D view 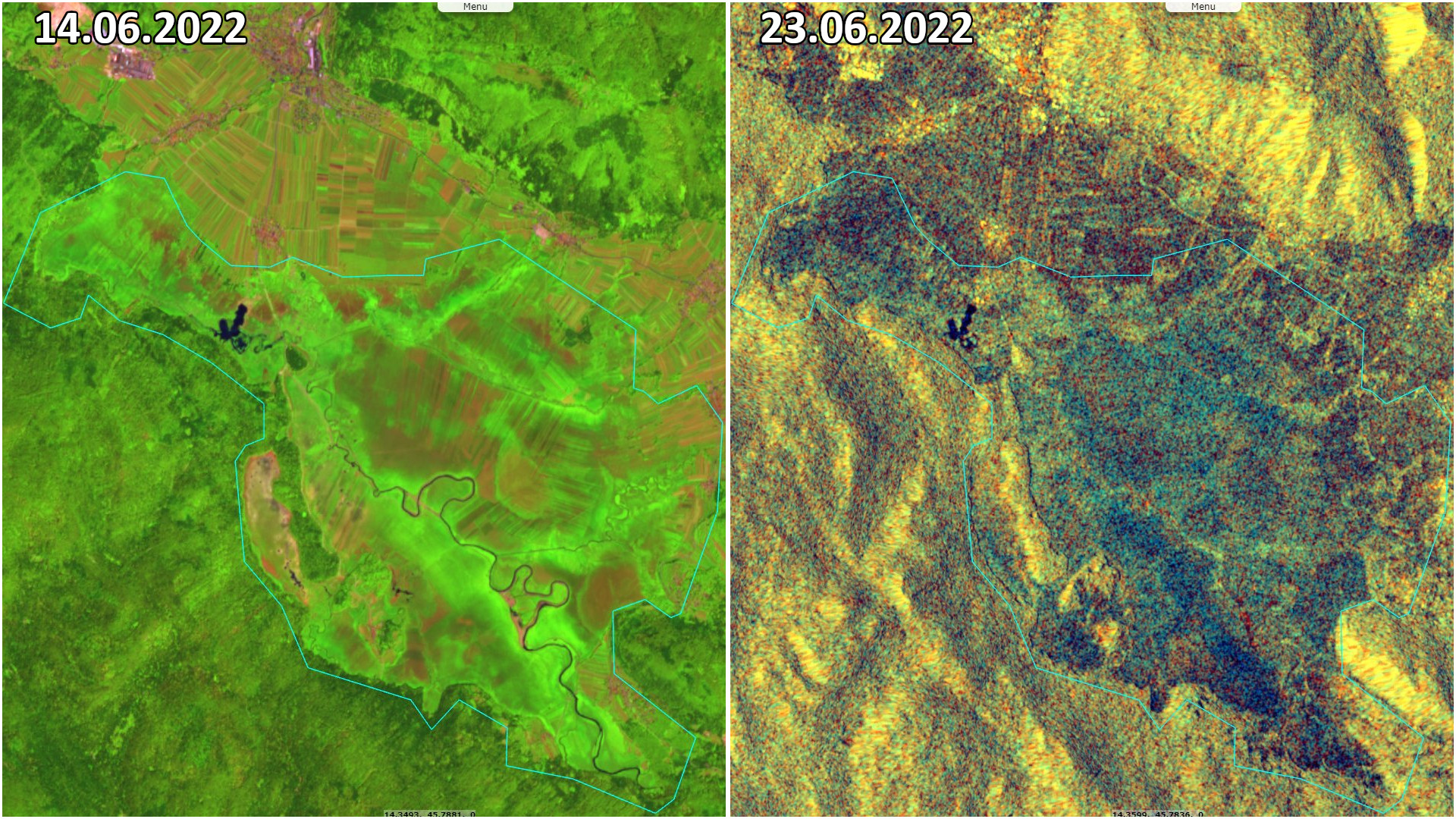 "The most prevalent species among reptiles is the grass snake in the water part of the site, while the green lizard prevails at the shore and on drier ground. The common viper and the common lizard can be also found at the littoral stretch; in total, 11 reptile species can be found at Cerkniško jezero, among them the pond turtle. Cerkniško jezero is renown for the richness of amphibians such as cave salamander. In the cave Vranja jama at Zadnji kraj over 25 000 common frogs hibernate which makes this cave the world's largest known wintering site of Rana temporaria. Cerkniško jezero is also rich in malacofauna. So far, 136 snail species and 6 shell species have been identified in the area. Of special interest are species that live in the water sources and the subterranean species, of which 10 are endemic to the Ljubljanica catchement area. At Lake Cerknica and its environs, 36 species of dragonflies have been recorded, 428 beetle species and 125 species of diurnal butterflies. This means that at Cerkniško jezero 70% of all butterfly species living in Slovenia or one quarter of all European butterfly species may be seen."
Fig. 7 - S2 (07.10.2022) / S1 (09.10.2022) - The lake near its maximal extent for 2022, in early October.
3D view 3D view 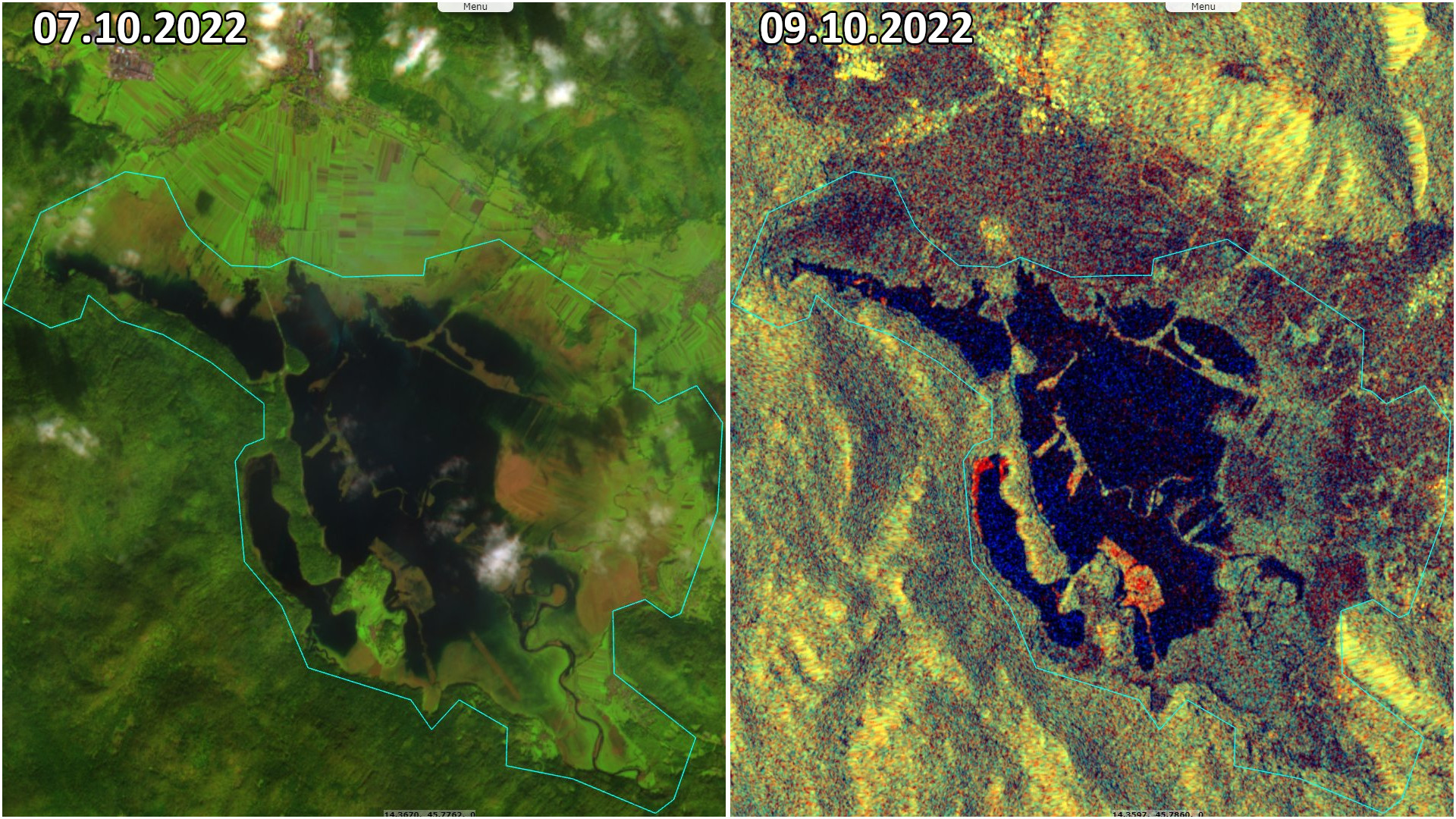 "Among mammals, the common otter and the water schrew living on the banks of the tributaries, are the most dependant on the lake's water body. Sightings of the brown bear on the lake's shore, scavenging dead fish when the lake dries up, are not uncommon. The high abundance of roe deer and red deer often attract the wolf. Traces found in muddy holes full of dead fish bear witness to the fact that the red fox, the European badger, and even the European lynx and the wild cat, feed on the fish, too. Among martens, the Martes foina is very frequent, whereas the European polecat has become rare. The ermine and the least weasel are also found there. Cerkniško polje, including the zone of the lake in the dry season, provide habitat for numerous field voles. In the night, the eastern European hedgehog can be often seen. Also nocturnal are the edible dormouse and the forest dormouse."
Fig. 8 - S2 (17.10.2022) / S1 (21.10.2022) - It lost the vast majority of its surface in the span of two weeks.
3D view 3D view 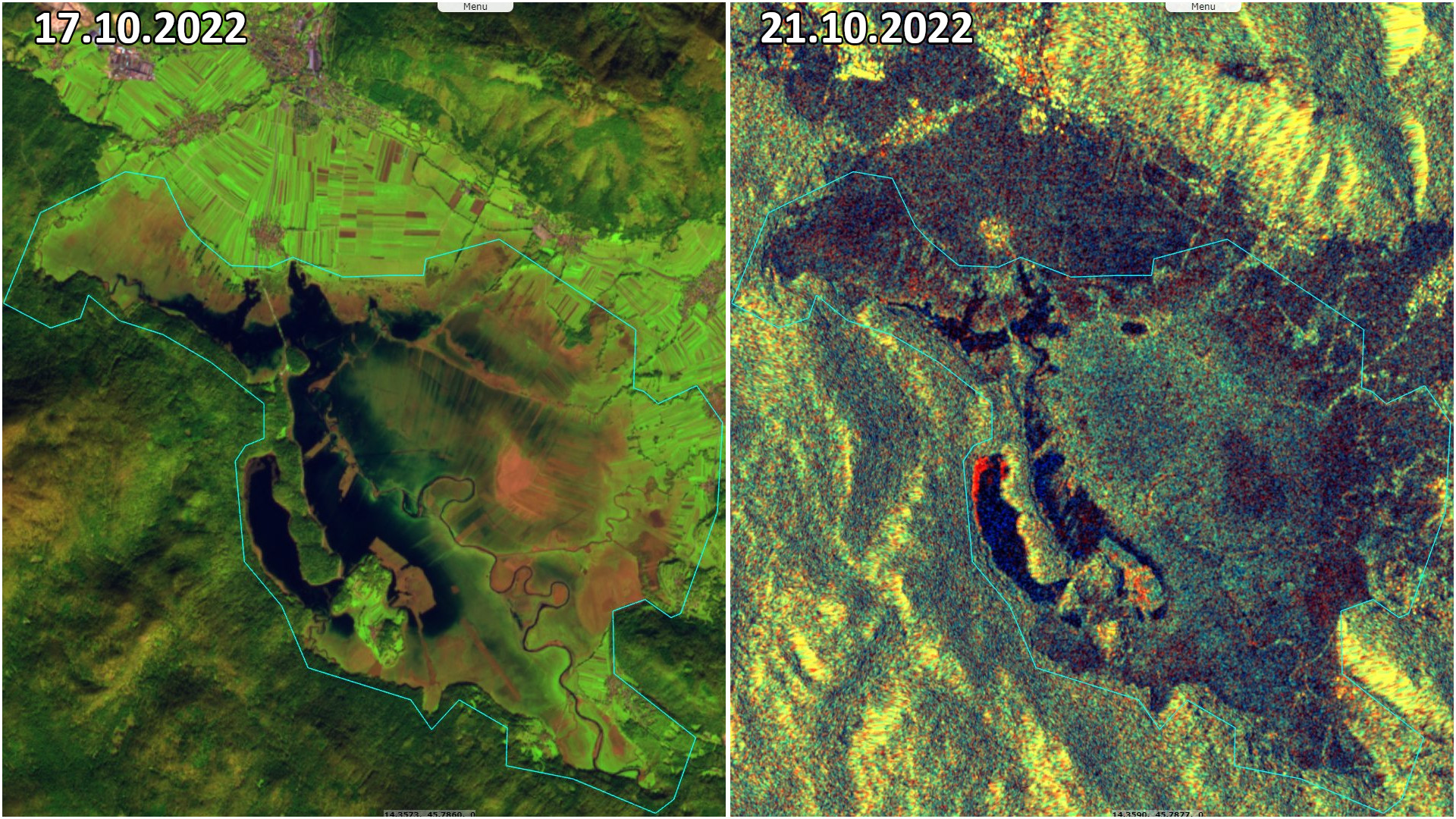 "Remains of Palaeolithic, Mesolithic, and Iron Age settlements are found on Gorica Island in the middle of the lake, as well as prehistoric settlements from the 12th to the 4th centuries BC and a Roman necropolis nearby. Frequent, unpredictable flooding makes intensive agriculture impossible, but pasture and forest uses are widespread, besides some small recreation grounds; appropriate tourist facilities are needed to avoid adverse effects of unorganised tourism."
The views expressed herein can in no way be taken to reflect the official opinion of the European Space Agency or the European Union.
Contains modified Copernicus Sentinel data 2022, processed by VisioTerra.