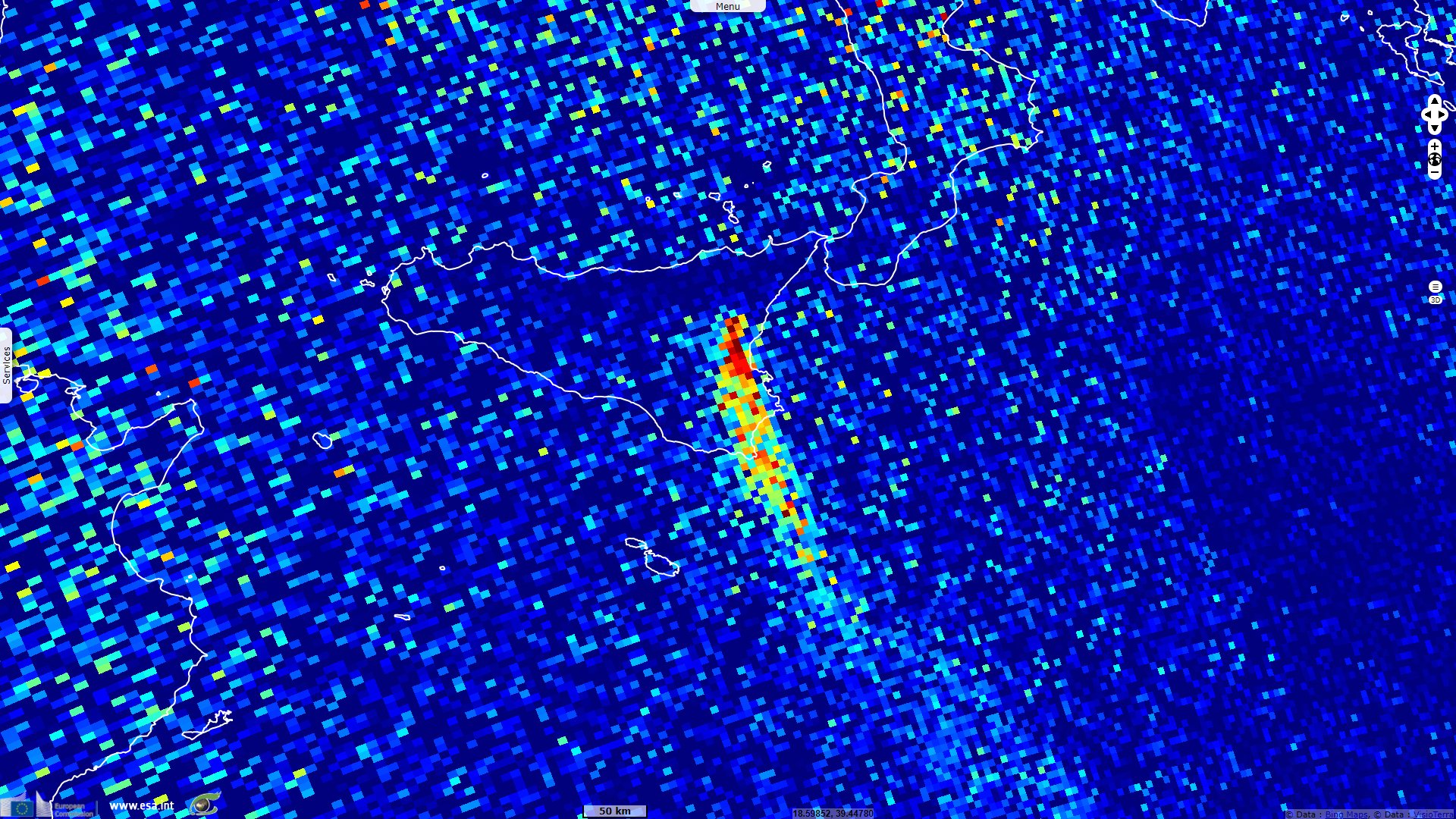 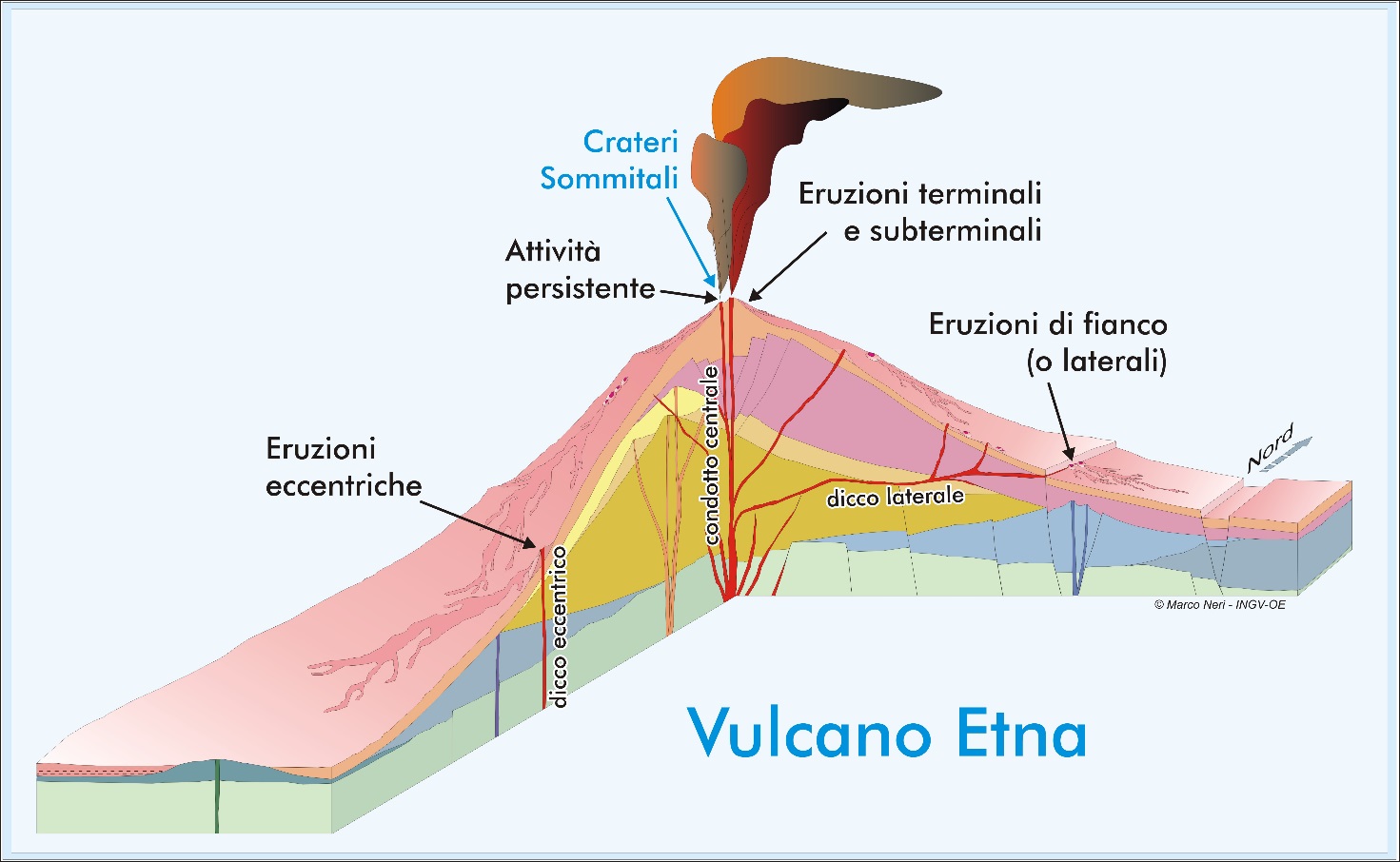 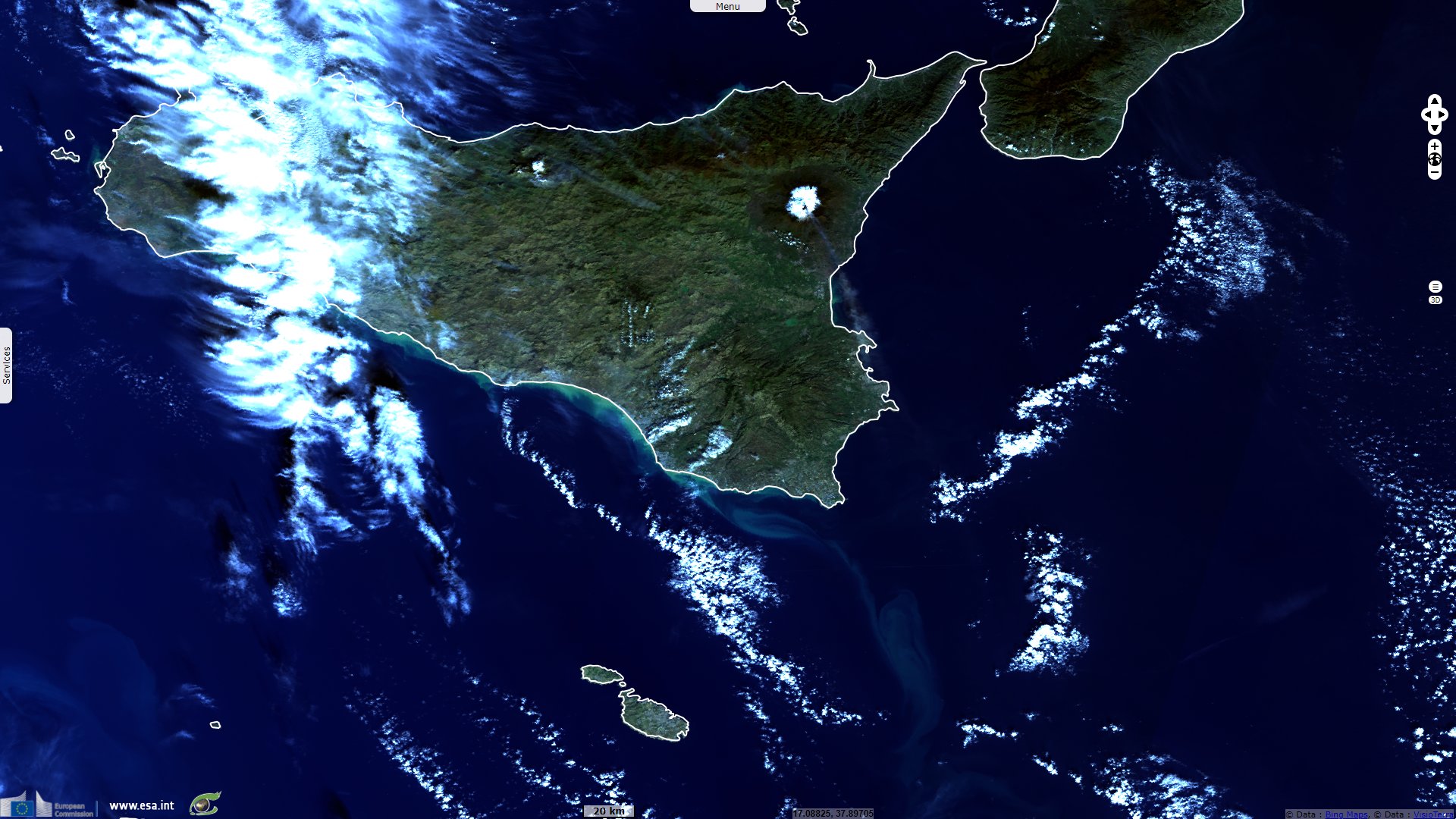 "Etna is the largest and tallest volcano of Europe, and one of the most active volcanoes on the Earth", reminds the Italy-based Istituto Nazionale di Geofisica e Vulcanologia (INGV). "Its eruptions occur both at the summit, where currently there are four crateres, and from its flanks, down to a few hundred meters above the sea-level. Summit activity can go on virtually continuously for many years or even decades (e.g., 1955-1971; 1995-2001), but it also often occurs during the intervals between flank eruptions. Such intervals can last from few months to more than 20 years, although in the past 40 years the average interval between flank eruptions has been only about 2 years. The duration of a flank eruption can be as short as a few hours, but in some cases exceed one year (1991-1993: 472 days; 2008-2009: 419 days)."
Fig. 3 - S3 SLSTR (14.12.2020) - The thermal anomaly highlights the ongoing eruption.
2D view 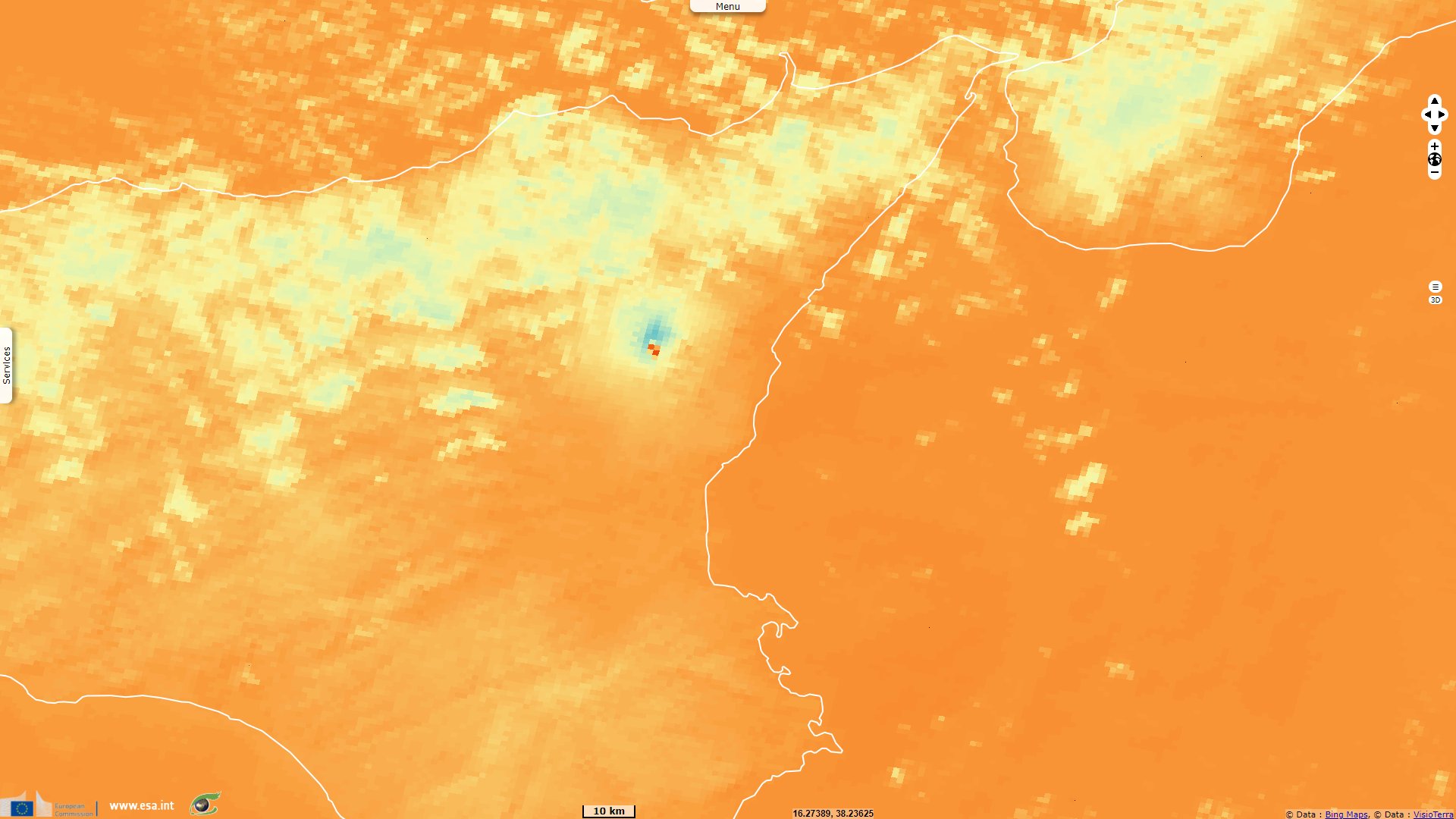 "The four summit craters are: the Voragine and the Bocca Nuova, formed in 1945 and 1968, respectively, within the Central Crater; the Northeast Crater that exists since 1911 and is currently the highest point on Etna (3330 m); and the Southeast Crater, born in 1971, which has recently been the most active of the four craters. This configuration contrasts strongly with that of one century ago, when at the summit of Etna there was only the Central Crater."
Fig. 4 - S3 SLSTR (14.12.2020) - The lava flow on the first day of the eruption.
2D view 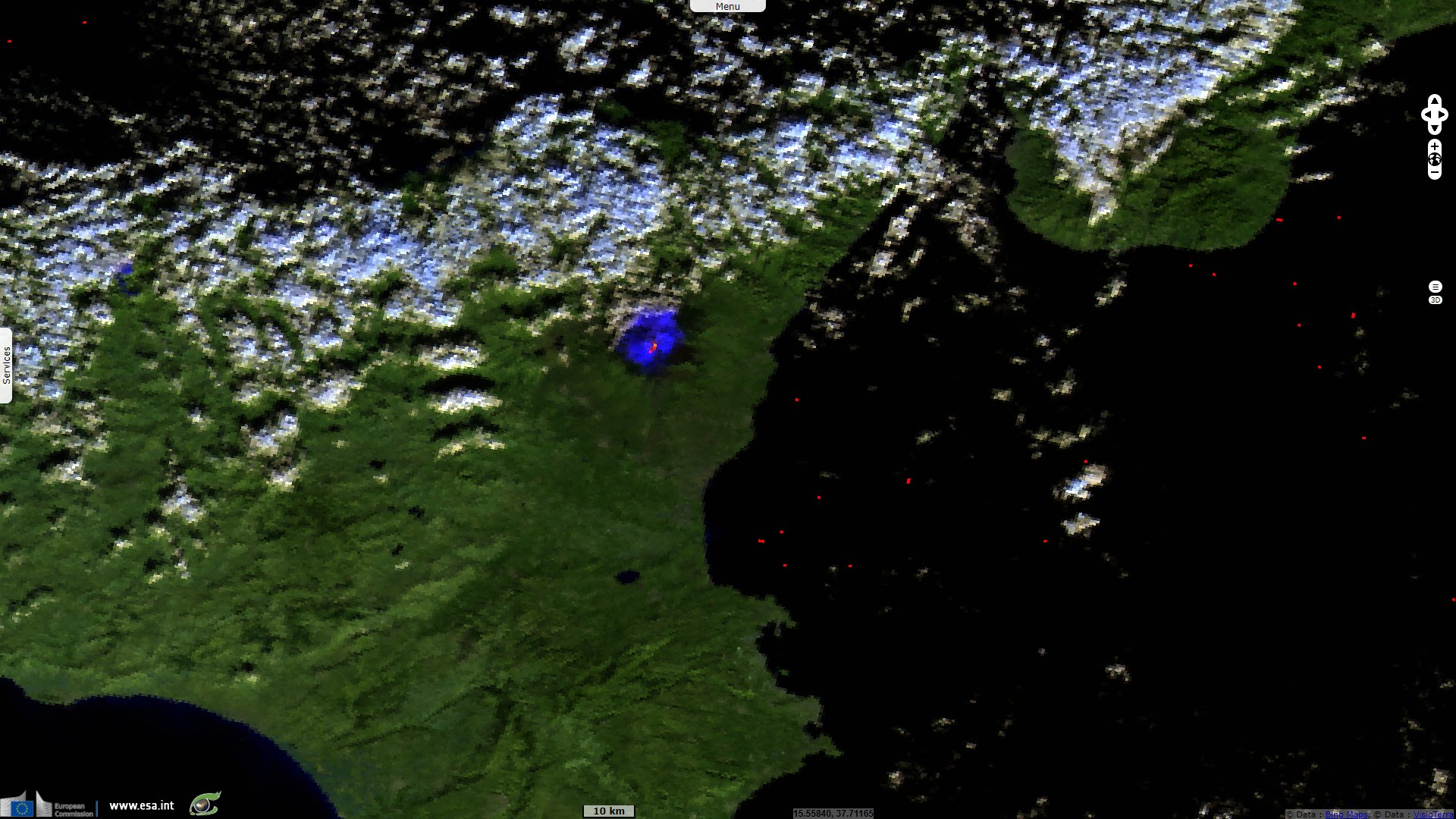 "Until recently, Etna has been considered a prevalently effisuve volcano, that is, characterized mostly by the emission of lava flows. These can cause material damage but do not represent a direct threat to the lives of the about 900,000 people living in the area potentially threatened by eruptions of Etna. New studies, however, have revealed that this volcano is capable of producing violently explosive activity, like the Plinian eruption of 122 B.C. . In recent years, especially since the late 1970s, there has been a significant increase in the frequency of explosive eruptive episodes, foremost at the summit craters. In particular, the summit eruptions of 1995-2001 included about 150 episodes of lava or fire fountaining (such episodes are often referred to as paroxysms), many of which generated tall columns of ash and gas."
Fig. 5 - S3 SLSTR (15.12.2020) - Brighter lava in SWIR the next day; higher temperature would explain this stronger black body radiation.
2D view 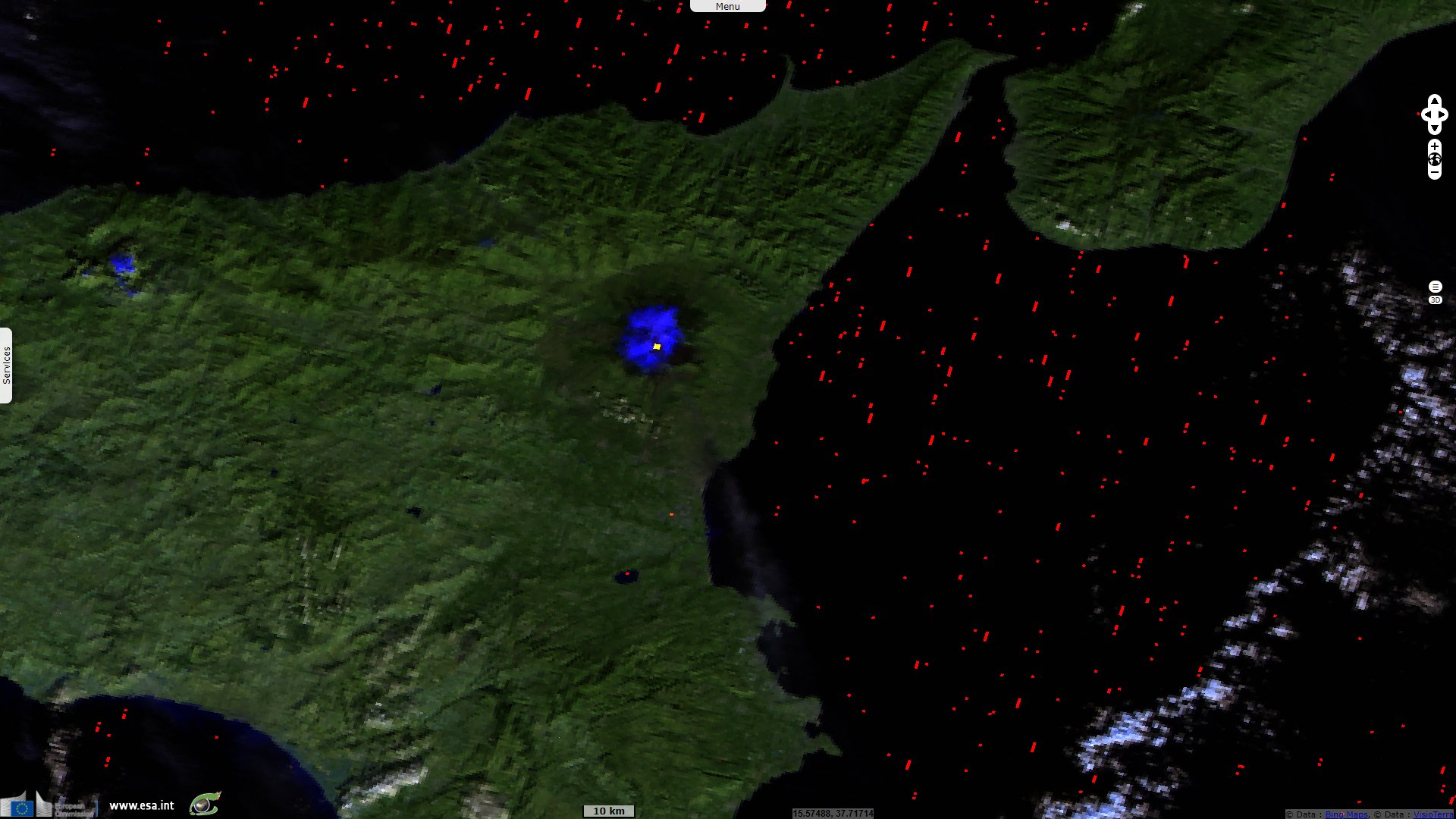 "The flank eruptions of 2001 and 2002-2003 have demonstrated that significant amounts of pyroclastic material (ash, lapilli, bombs, and blocks) can be also generated by flank eruptions. Differently from the usually short-lived summit paroxysms, pyroclastic fallout during flank eruptions can go on for weeks or even months, and impact life in the populated areas, besides representing a serious threat for traffic both on the ground and in the air."
Fig. 6 - S2 (15.12.2020) - The bald active top contrasts with the snow capped layer below.
2D view 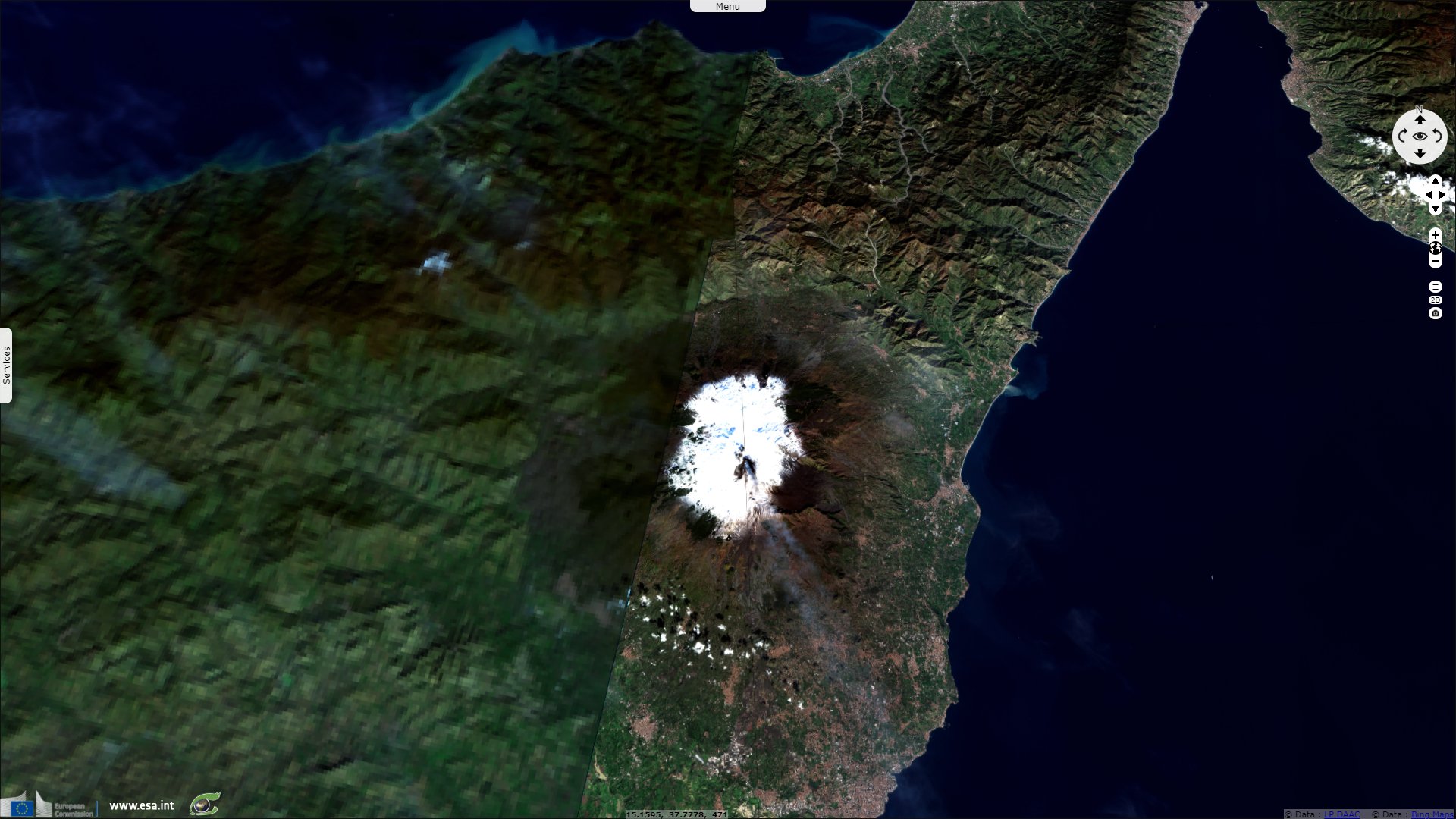 On 15 December 2020, INGV published a bulletin regarding the ongoing eruption of Etna: "The most recent paroxysmal episodes occurred at Voragine crater in December 2015 and May 2016; since then, the summit activity of Etna has not reached the intensity of a paroxysm. Until the evening of December 13, 2020. In early December 2020, the eastern most eastern mouth of the Southeast Crater also returned to strombolian activity, the most recent manifestations of which date back to early December 2019. Since December 6, there has been a sharp decrease in activity at the Southeast Crater, resulting in a decrease in the amplitude of the volcanic tremor."
Fig. 7 - S2 (05.12.2020) - The active vents and domes before the new eruption.
2D view 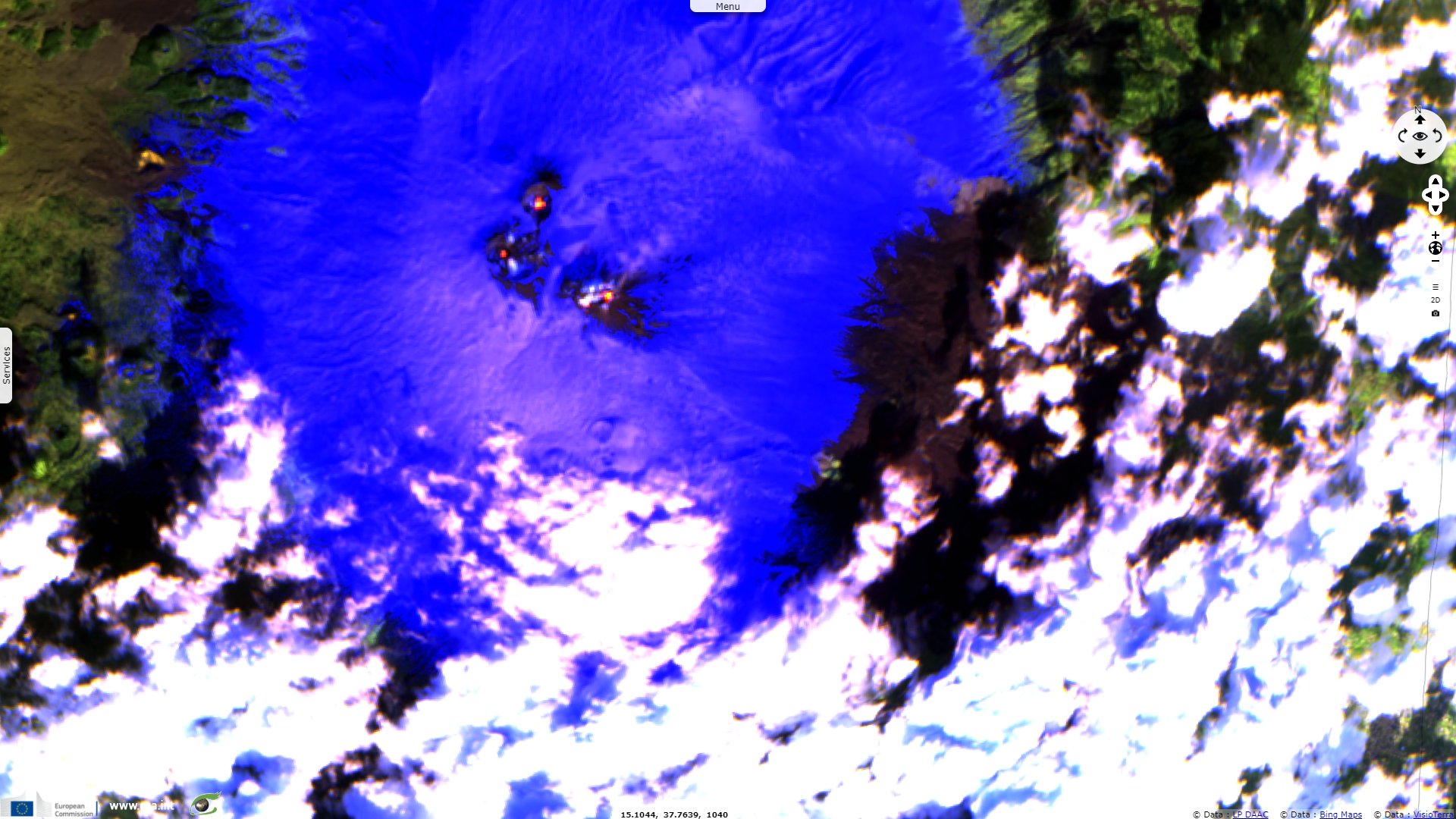 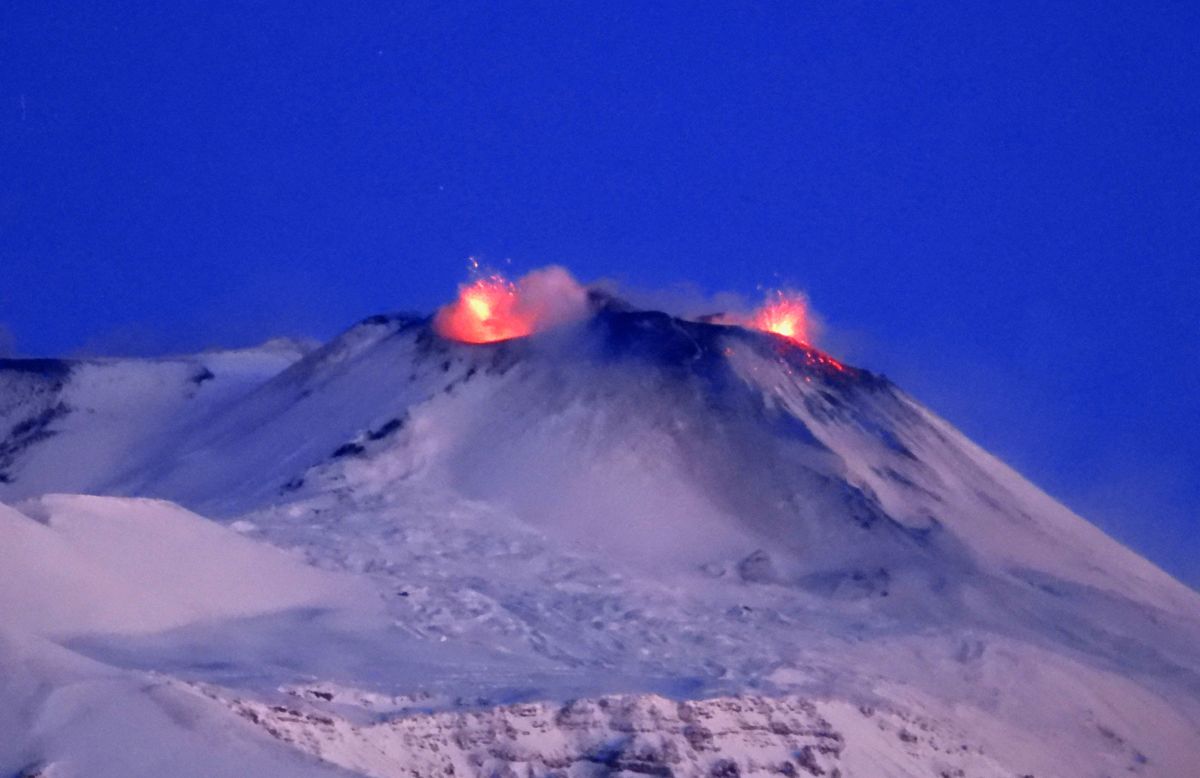 "Simultaneous strombolian activity at the "mouth of the saddle" (left) and the eastern one (right) on the morning of December 2, 2020." - Source: INGV.
"On the evening of December 13, however, the amplitude of the tremor increased rapidly, in conjunction with a rapid intensification of strombolian activity at the 'mouth of the saddle', which around 23:00 local time passed to lava fountains. At 11:15 p.m., a series of landslides began on the southern flank of the Southeast Crater cone, which generated pyroclastic flows at 11:15 p.m., 11:16 p.m. and 11:30 p.m. (local time) heading southwest. While the first and third of these flows were small and covered only a few hundred meters from the point of origin, the second was larger and reached about 2 km in length on the flat ground upstream of the prehistoric cone of Monte Frumento Supino)."
Fig. 8 - S2 (15.12.2020) - The lava flow becomes colder as it comes down and melts the snow cover.
2D view 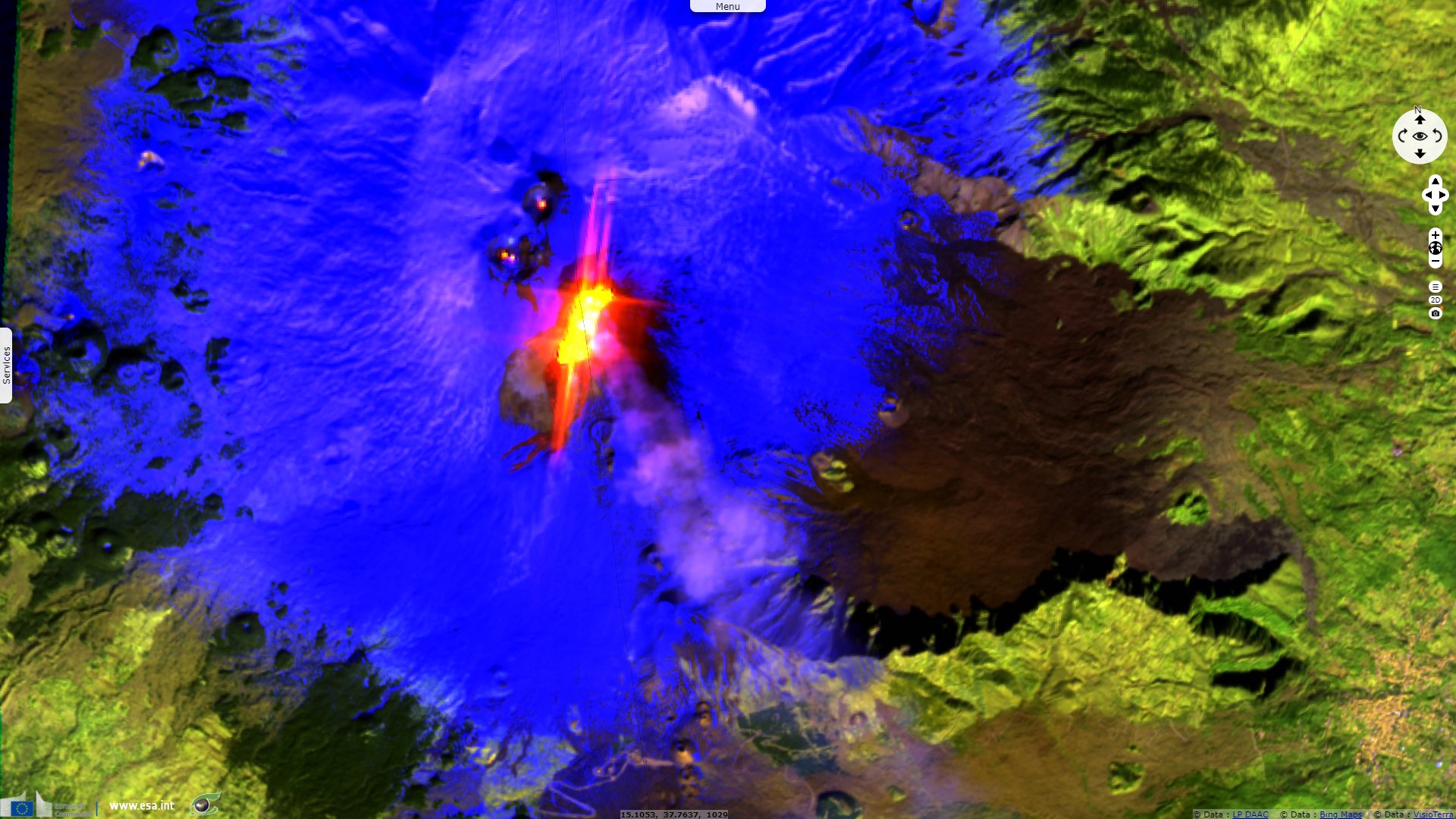 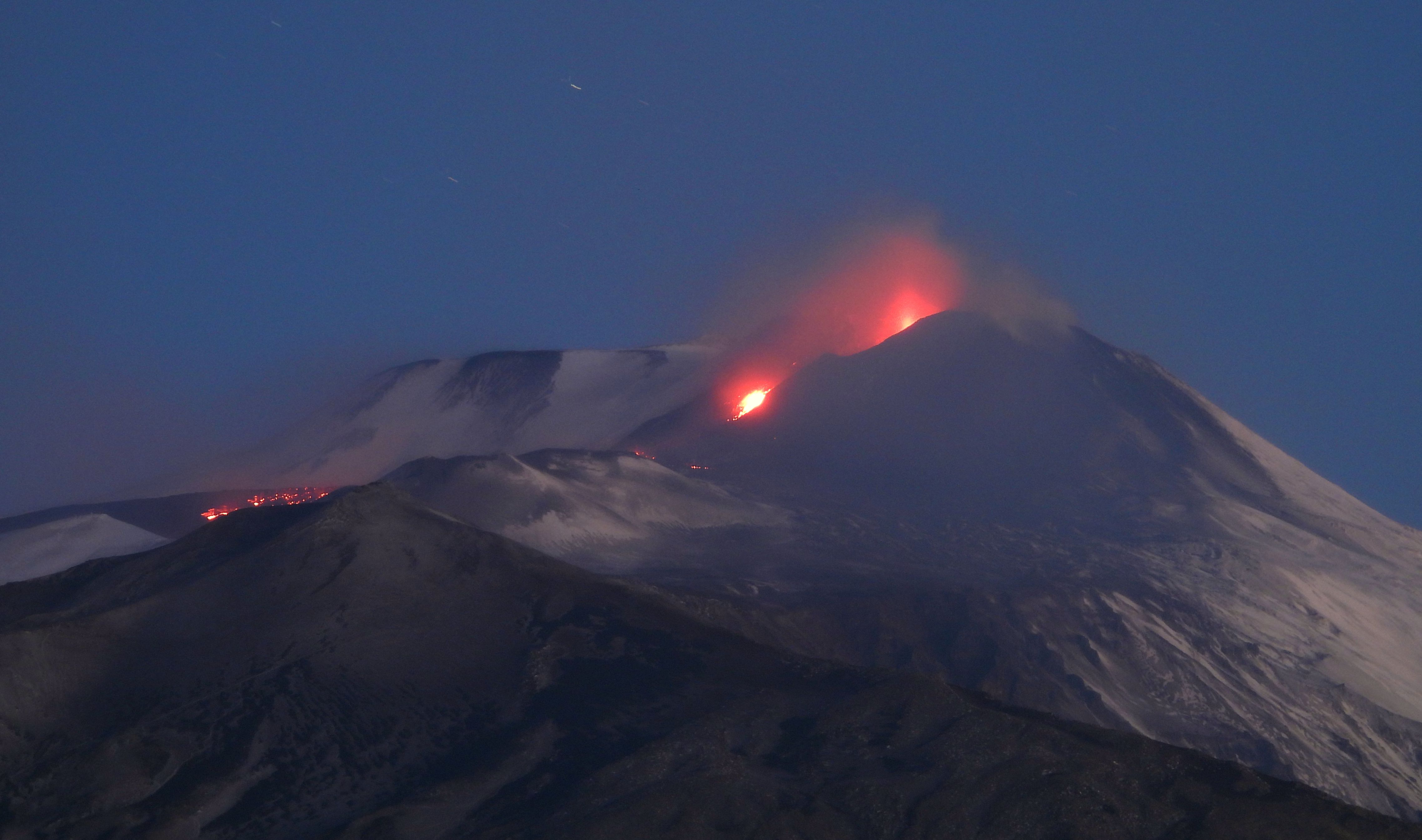 "At dawn on December 14, 2020, weak strombolian activity continues at the South-East Crater (right) and you can see areas still glowing along the lava flow on the side of the Southeast Crater (center) and at the front of the southwestern casting (left)" - Source: INGV.
"A new lava flow has descended into the 'trench' left by the fractation of the southwestern side of the cone, overlapping with the previous south-west-oriented flow. Again, this phase of lava fountains was followed by weak strombolian activity, which intensified once again around 02:00, to give a third phase of lava fountains. Compared to the previous two phases, this was considerably less intense, but lasted about an hour. A new lava flow has spilled over into the tracks of previous ones heading southwest. For the rest of the night and during the morning a modest strombolian activity continued, while the effusive activity ceased, and at dawn you could see a few glowing spots on the south-west casting front."
Fig. 9 - S2 (15.12.2020) - A thin red line shows in the lava flow in this view using natural colour.
2D view 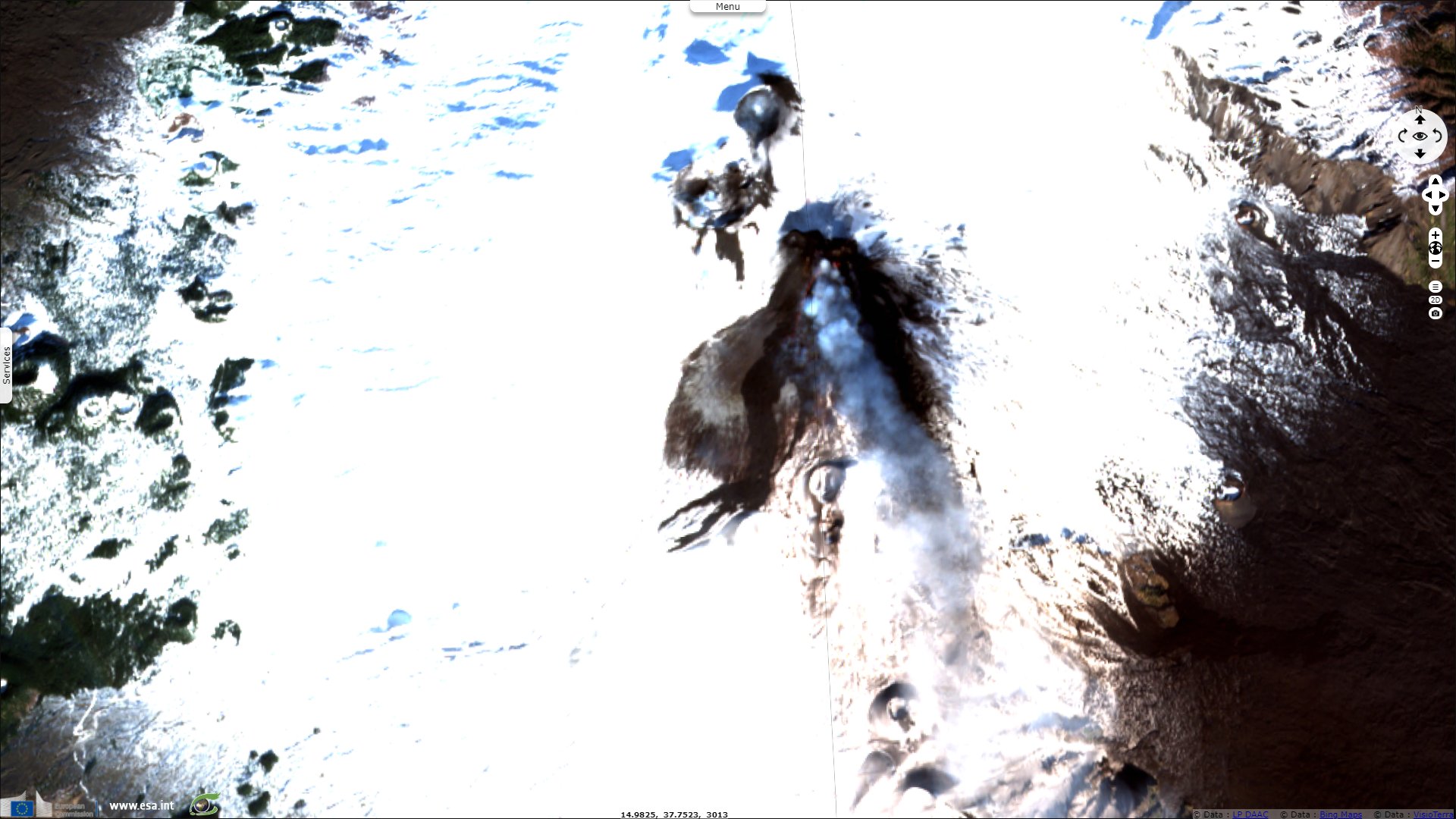 "On the evening of December 14, an almost continuous strombolian activity continued from this mouth and from that 'of the saddle', producing strong audible roars in the Etna area. After a decreased activity interval, strombolian activity intensified again in the morning of December 15, affecting three erductive vents on the Southeast Crater, and lava emissions from the southwestern side of the cone resumed."
The views expressed herein can in no way be taken to reflect the official opinion of the European Space Agency or the European Union.
Contains modified Copernicus Sentinel data 2021, processed by VisioTerra.