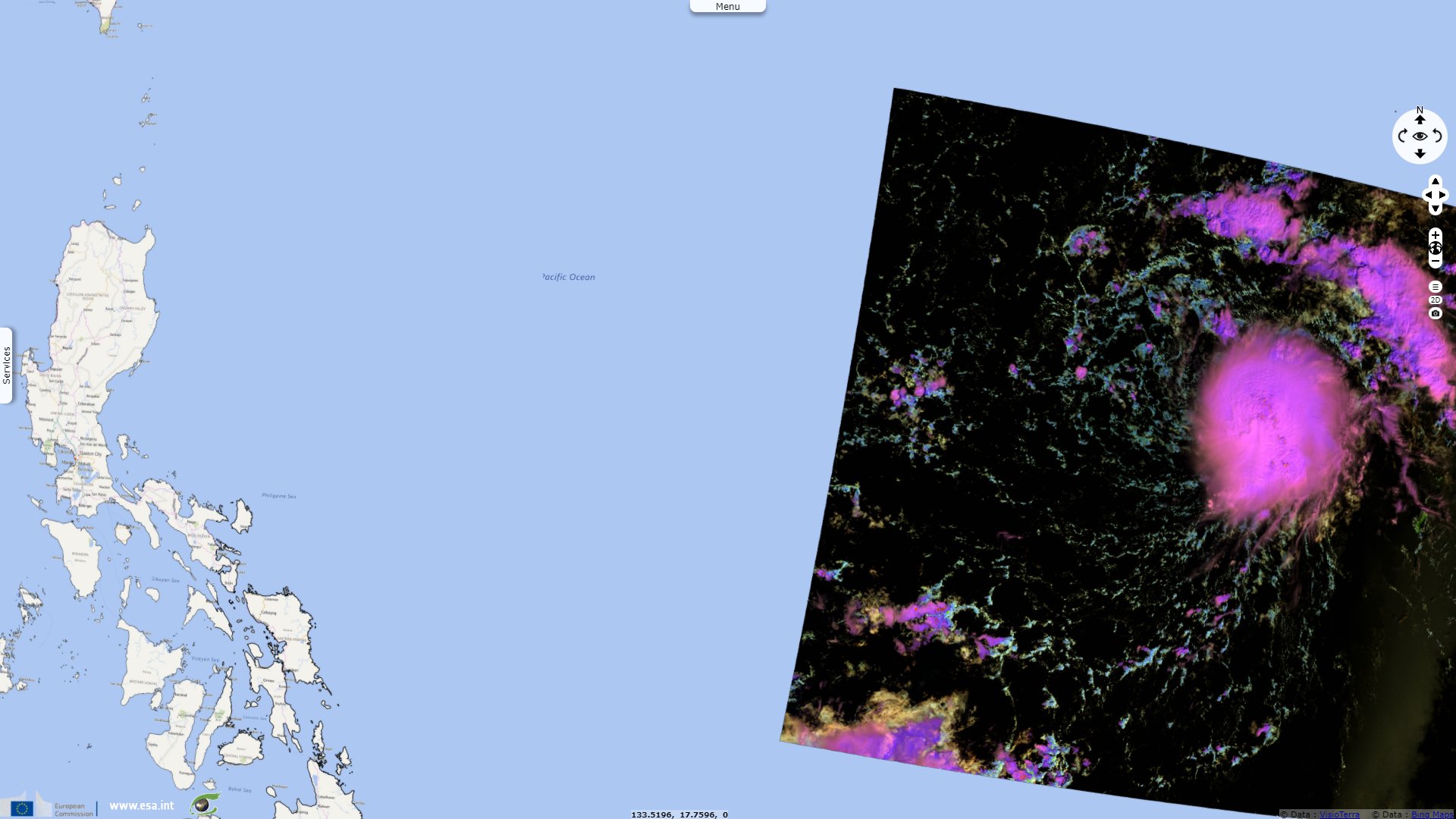 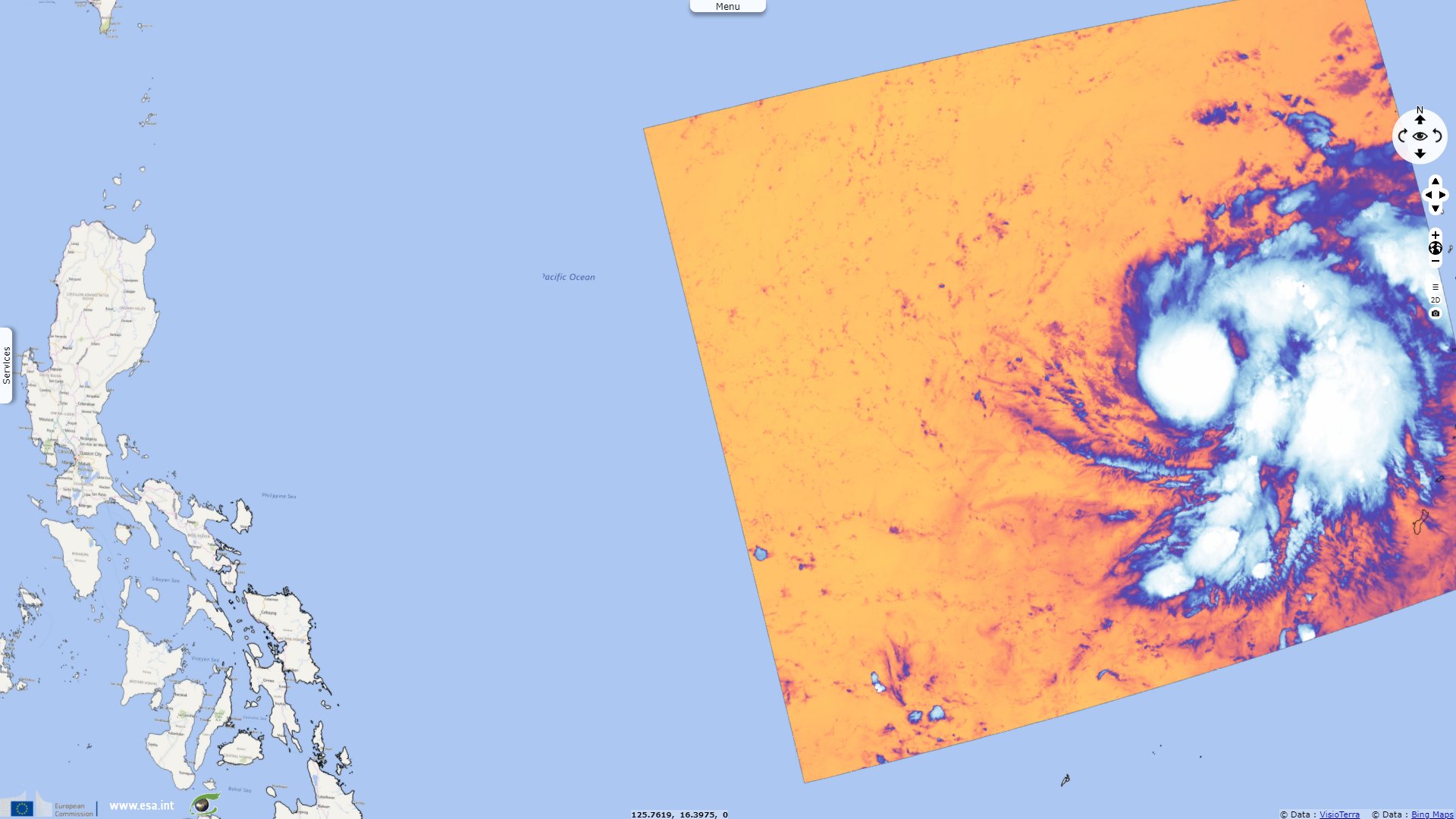 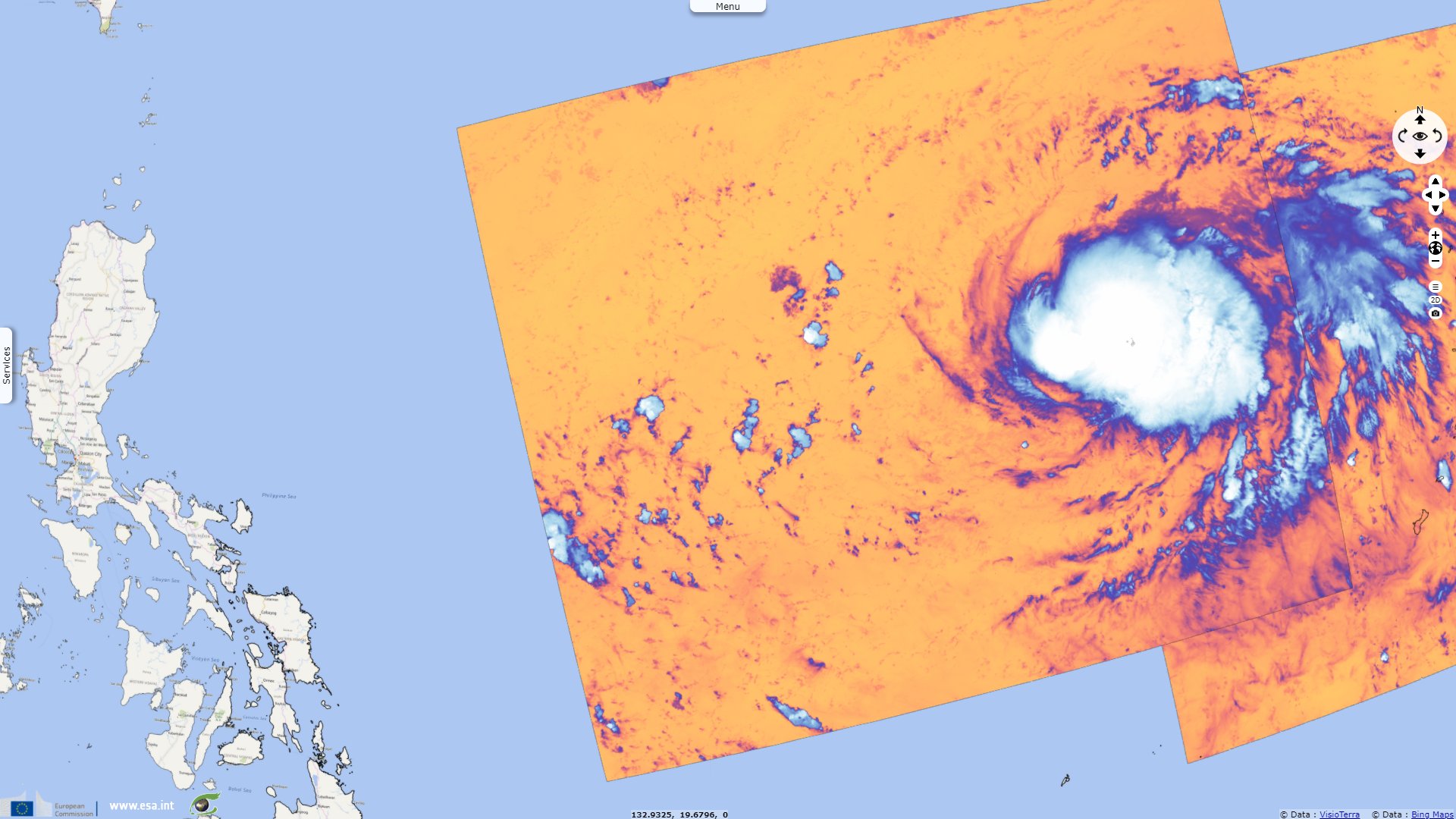 Philippines have been slammed by Super Typhoon Goni, the strongest landfalling tropical cyclone on record. Jason Samenow of the Washington Post has reported the event on Oct. 31, 2020: "In just a day’s time, Super Typhoon Goni transformed from an ordinary Pacific cyclone into the year’s most intense storm on the planet. The typhoon is now crashing into the Philippines, first striking Catanduanes Island, home to over 260 000 people. Goni’s explosive intensification occurred over the warm waters in the western Pacific Ocean. Its peak winds catapulted from just shy of [160 km/h] to nearly [290 km/h] between Thursday and Friday night local time."
Fig. 4 - S3 SLSTR (29.10.2020) - It structured and became a tropical storm.
2D view 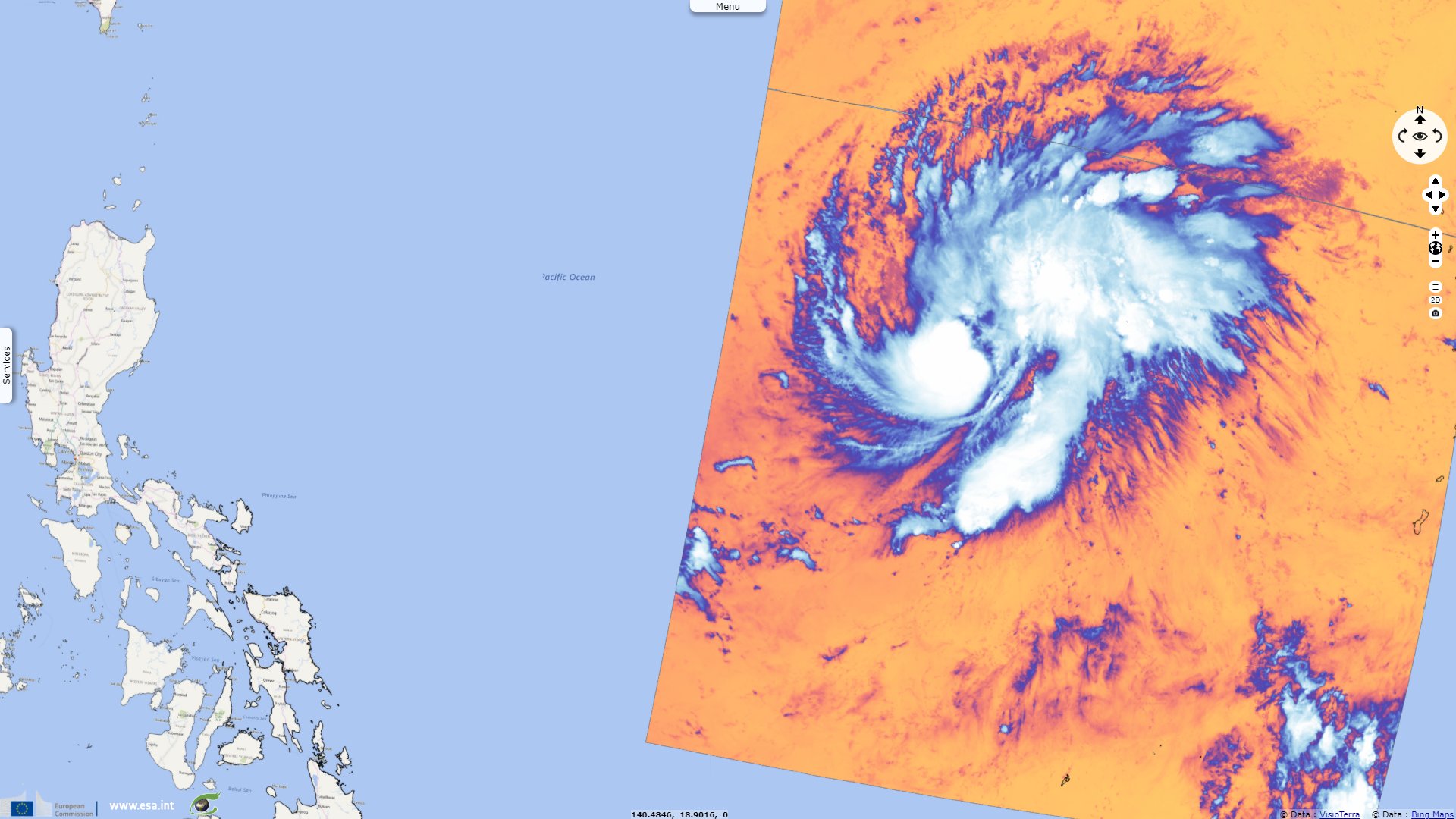 Goni maintained Category 5 strength for over a day, before making landfall on Catanduanes island at peak intensity, with 10-minute sustained winds of 220 km/h, and 1-minute sustained winds of 315 km/h, with a minimum central pressure of 905 hPa.
Fig. 5 - S3 SLSTR (30.10.2020) - The system underwent rapid intensification and became a typhoon on October 29, its eye formed soon after.
2D view 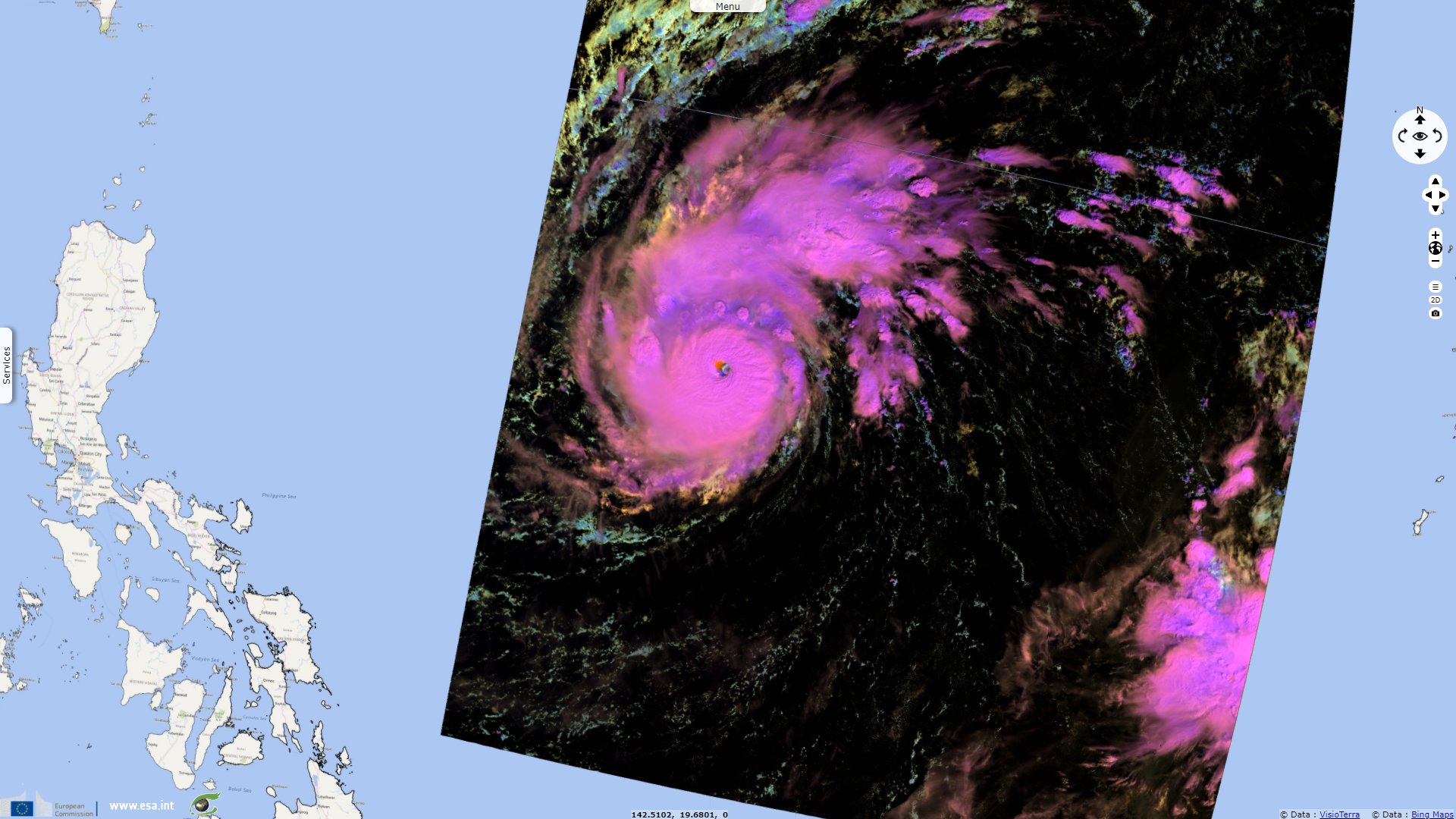 ACAPS added: "On the morning of 1 November 2020, Typhoon Goni (known locally as Rolly) made landfall in Bicol Region and hit the town of Tiwi in Albay province, causing rivers to overflow and flood much of the region. The typhoon – considered the world’s strongest typhoon so far this year – had maximum sustained winds of 225 km/h and gustiness of up to 280 km/h, moving at 25 km/h. At least 11 towns are reported to be cut off in Bato, Catanduanes province, as roads linking the province’s towns remain impassable." "More than 300 houses buried under rock in Guinobatan, Albay province, because of a landslide following heavy rains caused by the typhoon."
Fig. 6 - S3 SLSTR (30.10.2020) - It then became a strong cat-5 super typhoon.
2D view 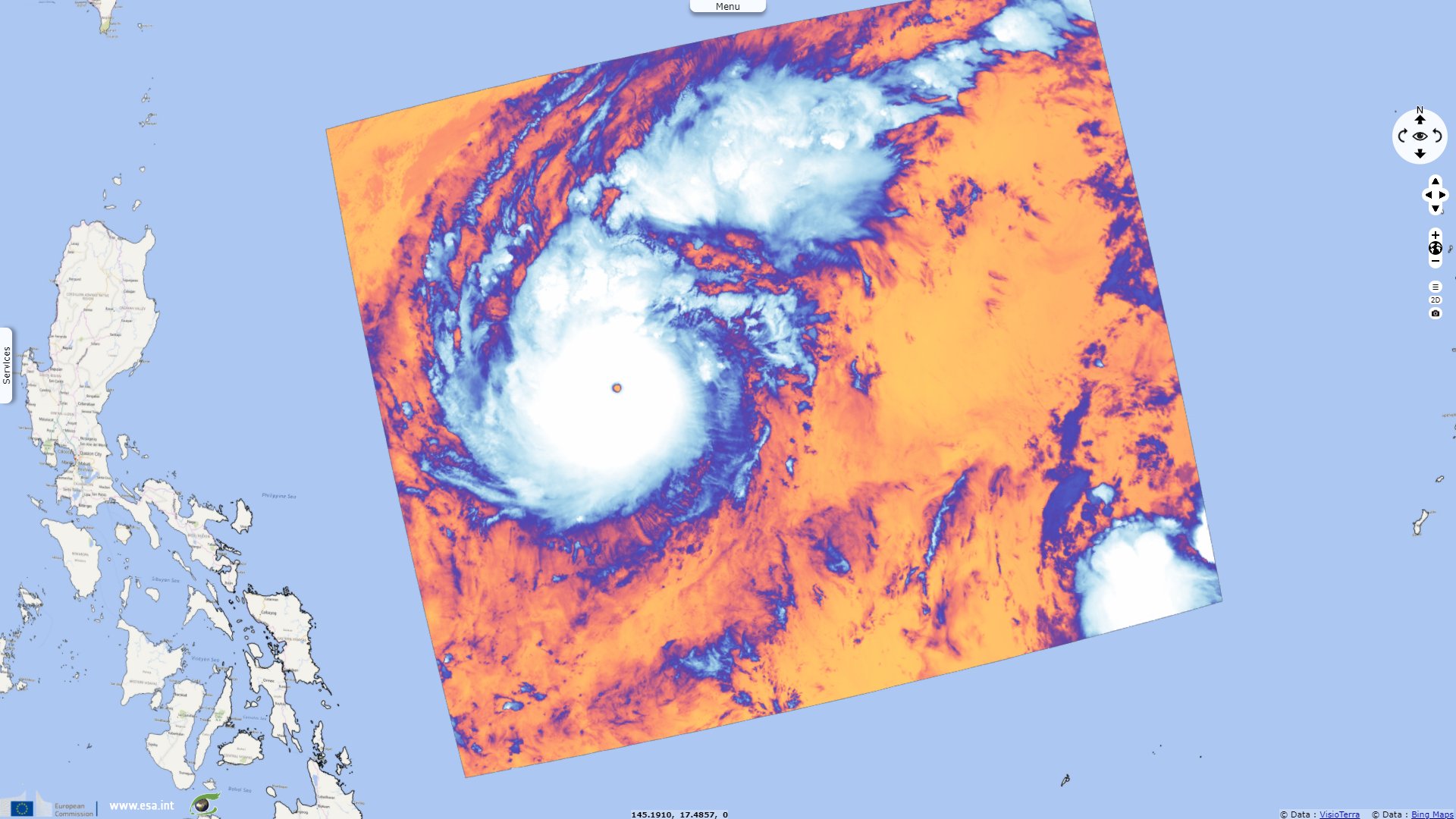 According to Copernicus Emergency Management Service, "Typhoon Goni became the strongest landfalling tropical cyclone on record. The storm brought severe flash flooding to Legazpi, as well as lahar flow from the nearby Mayon Volcano. There are widespread power outages as well as damaged power and transmission lines in the Bicol Region. Over 390 000 out of 1 million evacuated individuals have been displaced in the region. Debris and lahars had also blocked various roads and the Basud Bridge."
Fig. 7 - S3 SLSTR (31.10.2020) - At its maximum strength, it reached 1-minute sustained winds of 315 km/h
2D view 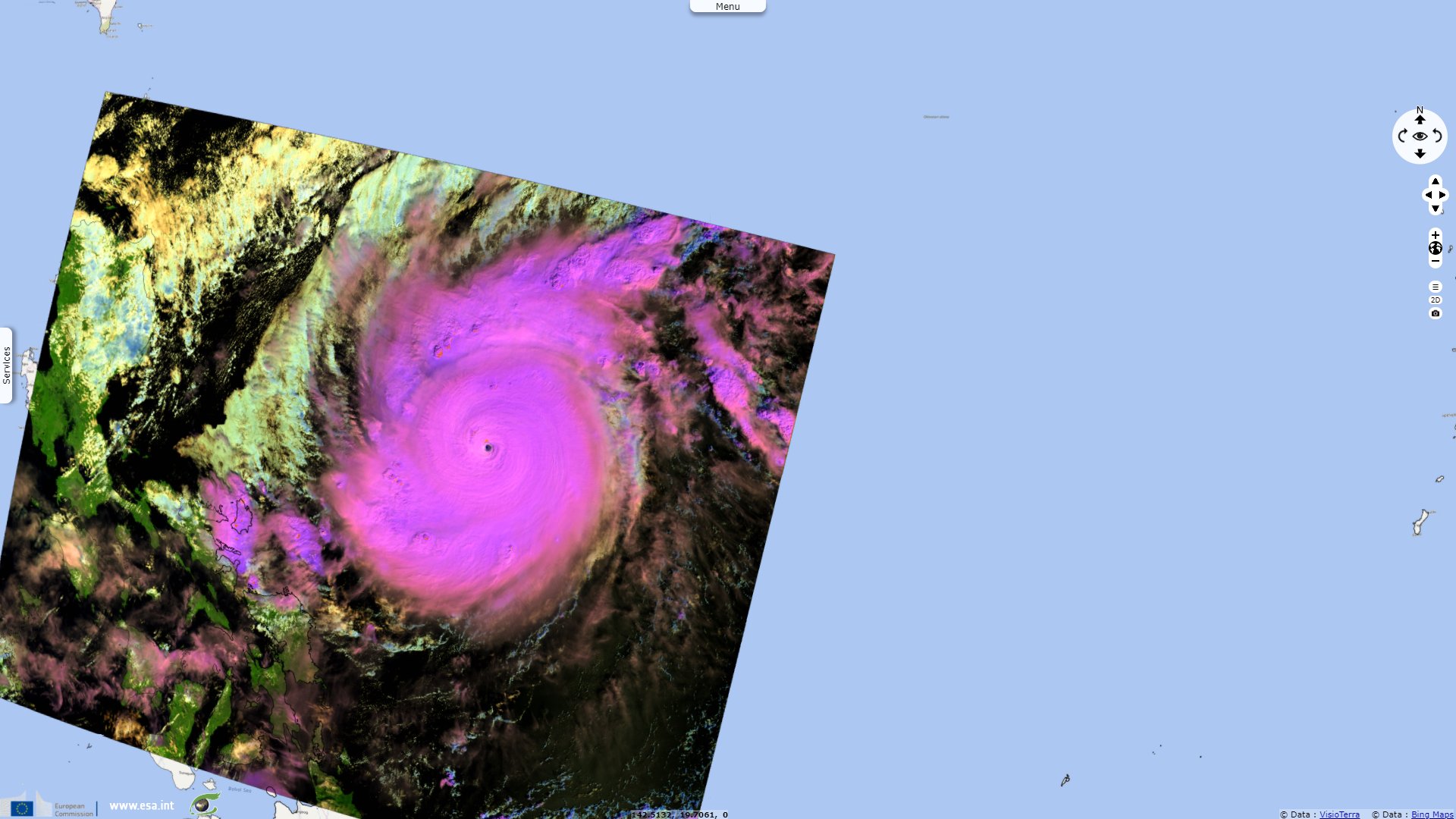 United Nations Office for the Coordination of Humanitarian Affairs (OCHA) estimated the toll: "The Bicol Region bore the brunt of the typhoon’s violent winds and torrential rains, blowing away roofs, toppling structures and causing severe flooding and landslides..." "The Department of Agriculture reports that 16 900 hectares of land are damaged, affecting 18 000 farmers. Initial estimates place production losses at 66 600 metric tons of rice, corn and high-value crops, amounting to US$24 million in value."
Fig. 8 - S1 (31.10.2020) - Super Typhoon Goni as it made landfall on Catanduanes island.
3D view 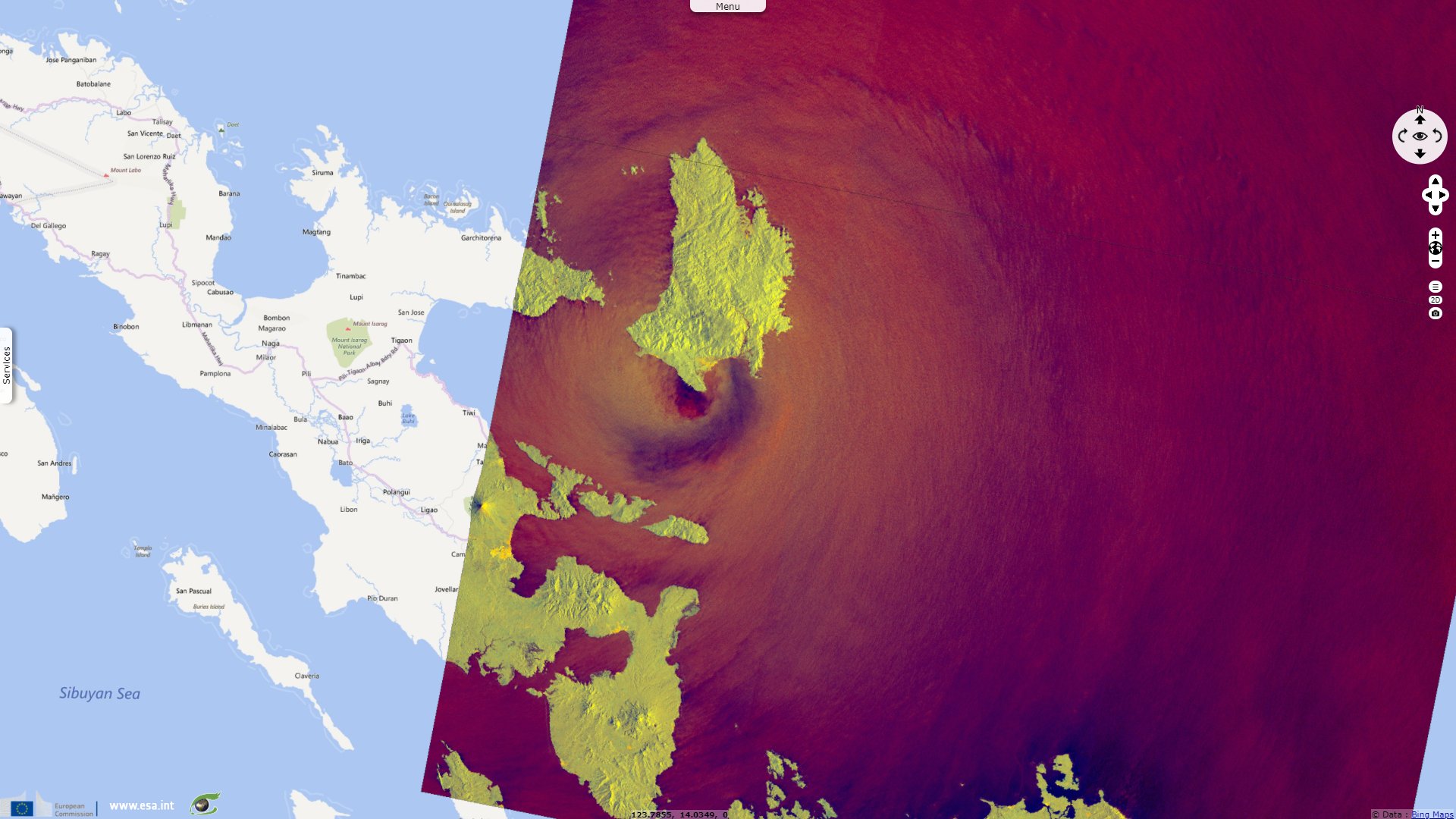 "Damage has been reported to [60] road sections and [7] bridges. A state of calamity was declared for Cavite Province (Calabarzon), while the aforementioned regions are still recovering from the effects of the recent typhoon, Molave." "In the Philippines, the number of fatalities caused by the passage of GONI has increased to [26] and 74 people have been injured, [6] are missing across Calabarzon, Mimaropa and Bicol Regions. There are 382 708 persons are currently displaced to evacuation centers. In total, approximately 2.08 million people have been affected."
Fig. 9 - S3 SLSTR (01.11.2020) - Super Typhoon Goni over Luzon island.
2D view 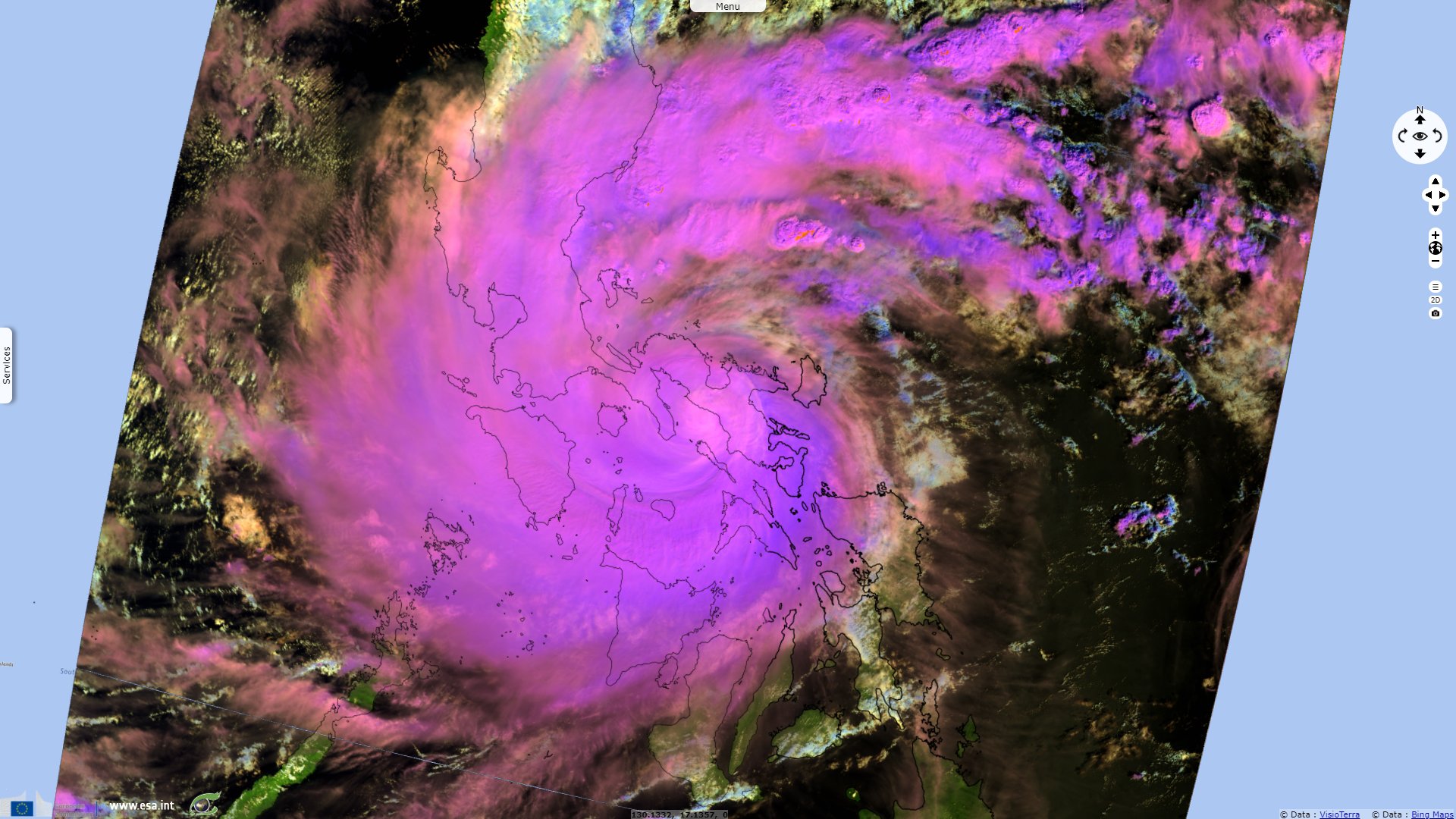 "On 9 November, the Humanitarian Country Team in the Philippines has launched a Humanitarian Needs and Priorities Plan to respond to the needs of 260 000 of the most vulnerable people in provinces affected by Super Typhoon Goni. The Plan calls for US$45.5 million to deliver and implement humanitarian activities to typhoon-affected people living with poverty prior to the disaster and now requiring urgent humanitarian assistance in 16 prioritized municipalities in Catanduanes and Albay provinces."
Fig. 10 - S1 (01.11.2020) - Damages near Tiwi on Luzon island.
2D animation 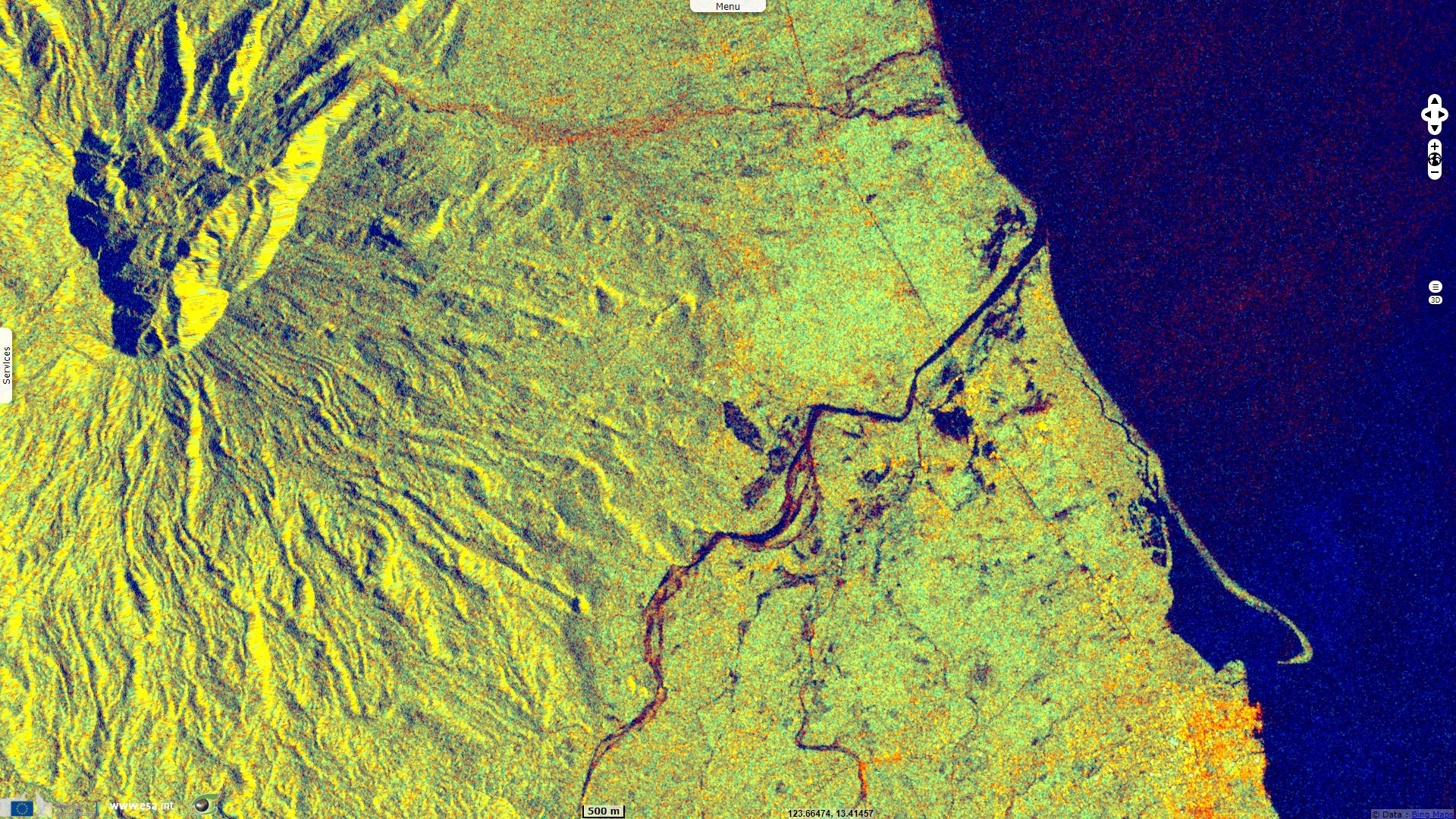 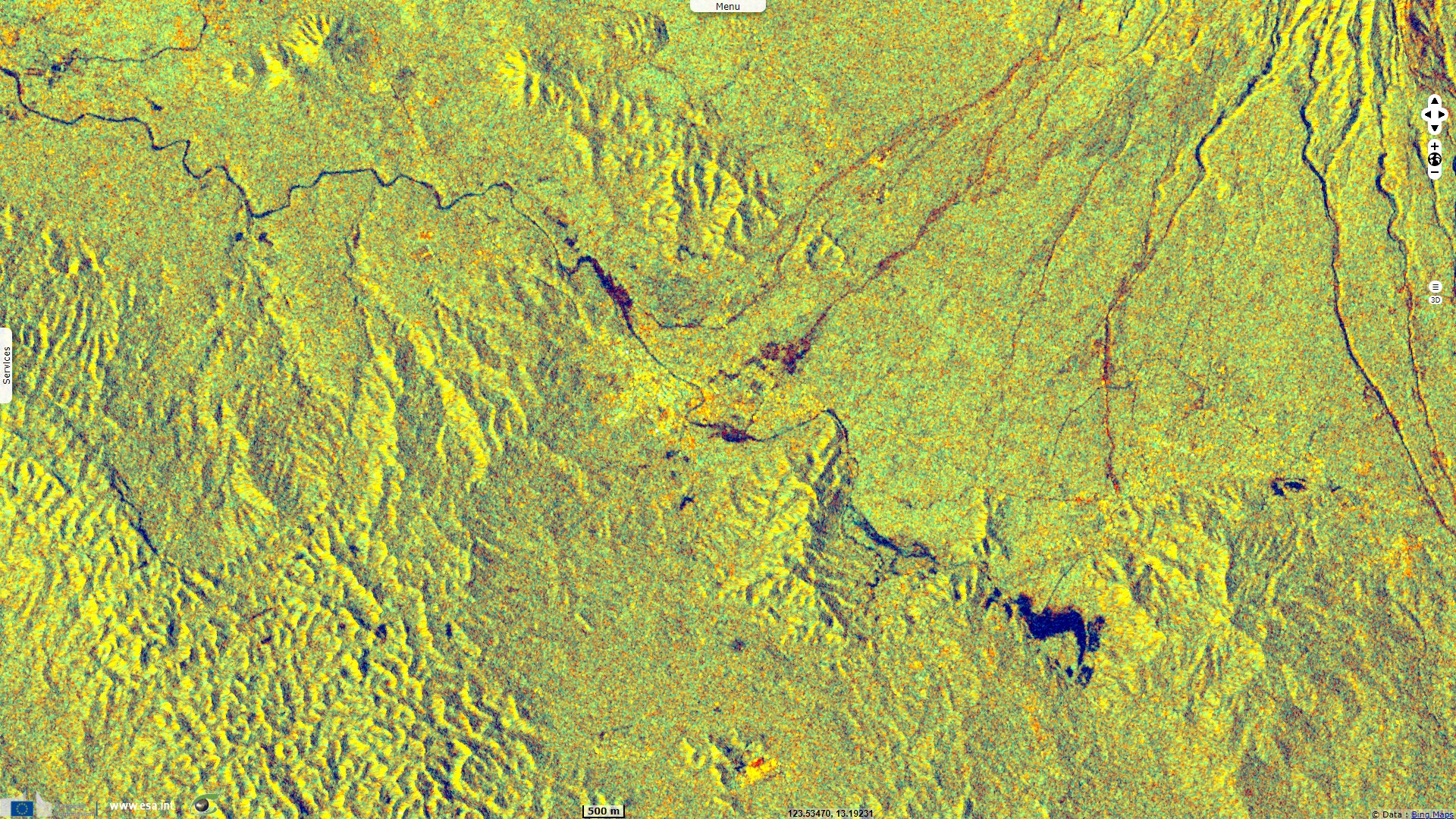 "Latest information on the impact of Typhoon Rolly points to 41 200 houses destroyed while 141 100 sustained minor to significant damages. In addition, 67 health facilities and thousands of schools have structural damages. Government estimates that damages to infrastructure amount to over $260 million. The Department of Agriculture reported that the successive typhoons resulted in $156 million losses in rice, corn, high valuecrops, fisheries, livestock, and in equipment and facilities. In Catanduanes, the governor stated that the province stands to lose $3 million in monthly income from its main commodity, abaca fibers, due to damages in farms. Other industries such as capture fishing and rice and coconut farming were also severely affected, thus people lost both their main and alternative sources of livelihood."
Fig. 12 - S1 (31.10.2020) - Lake Bato on Luzon Island.
2D animation 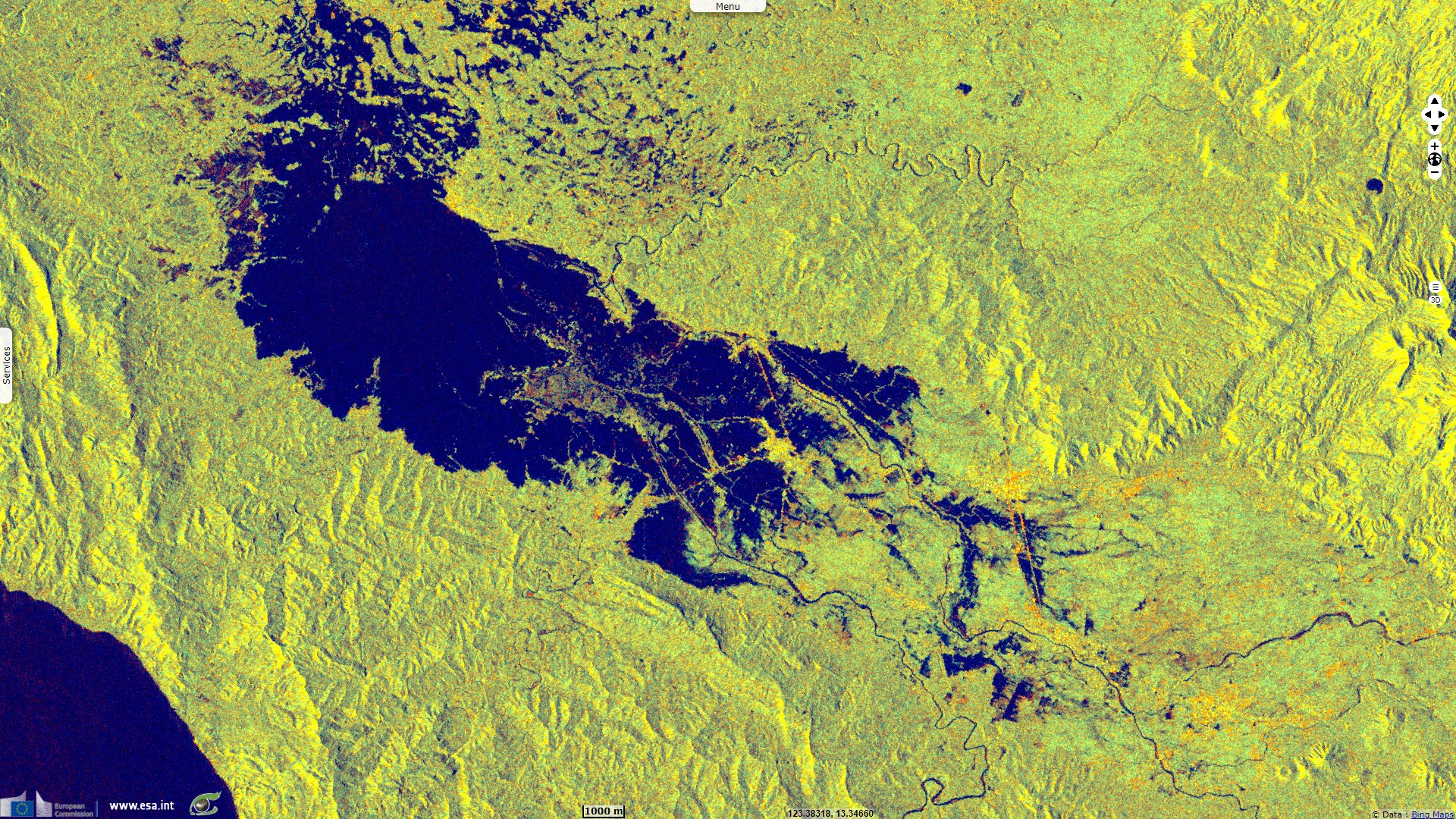 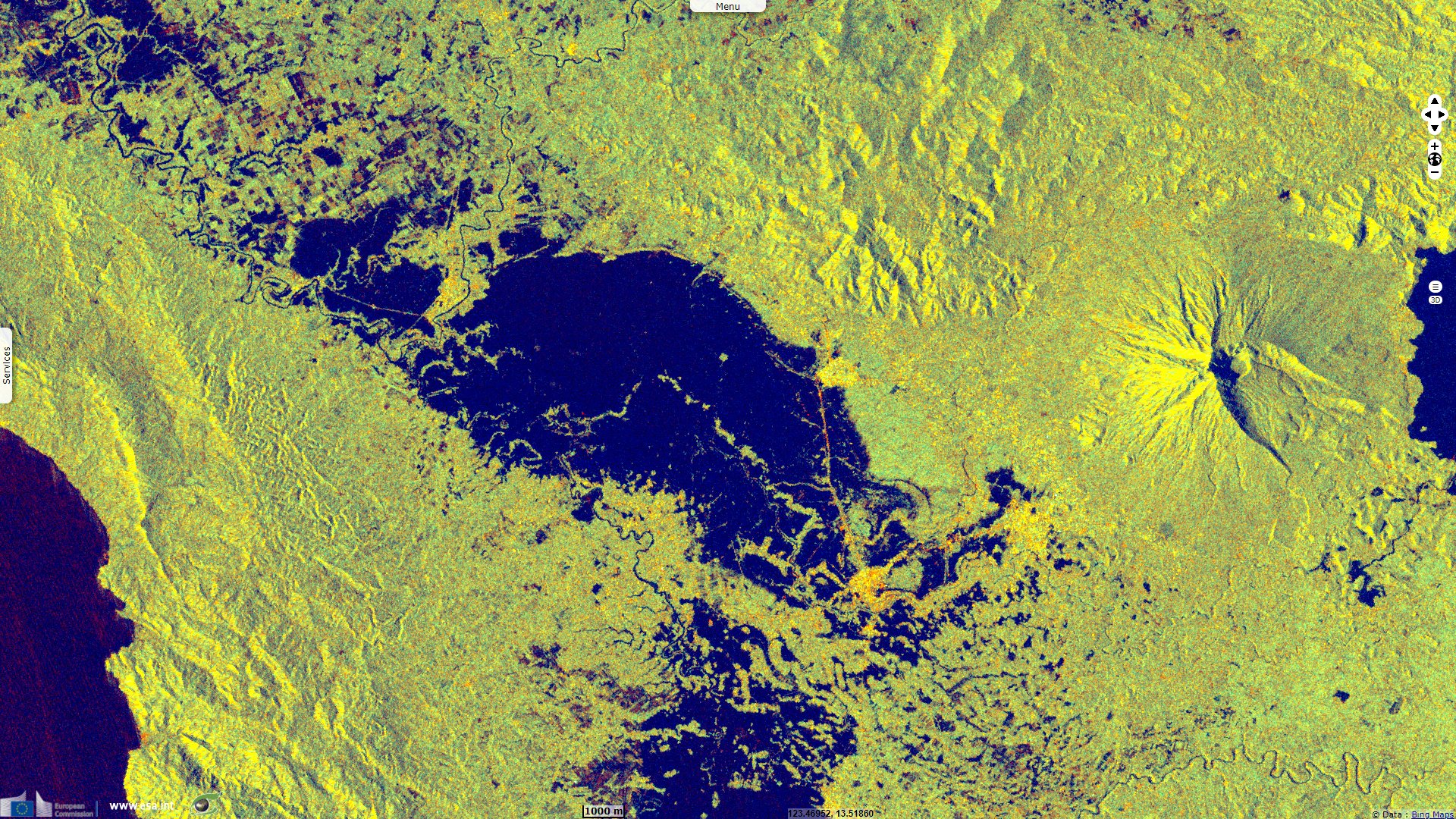 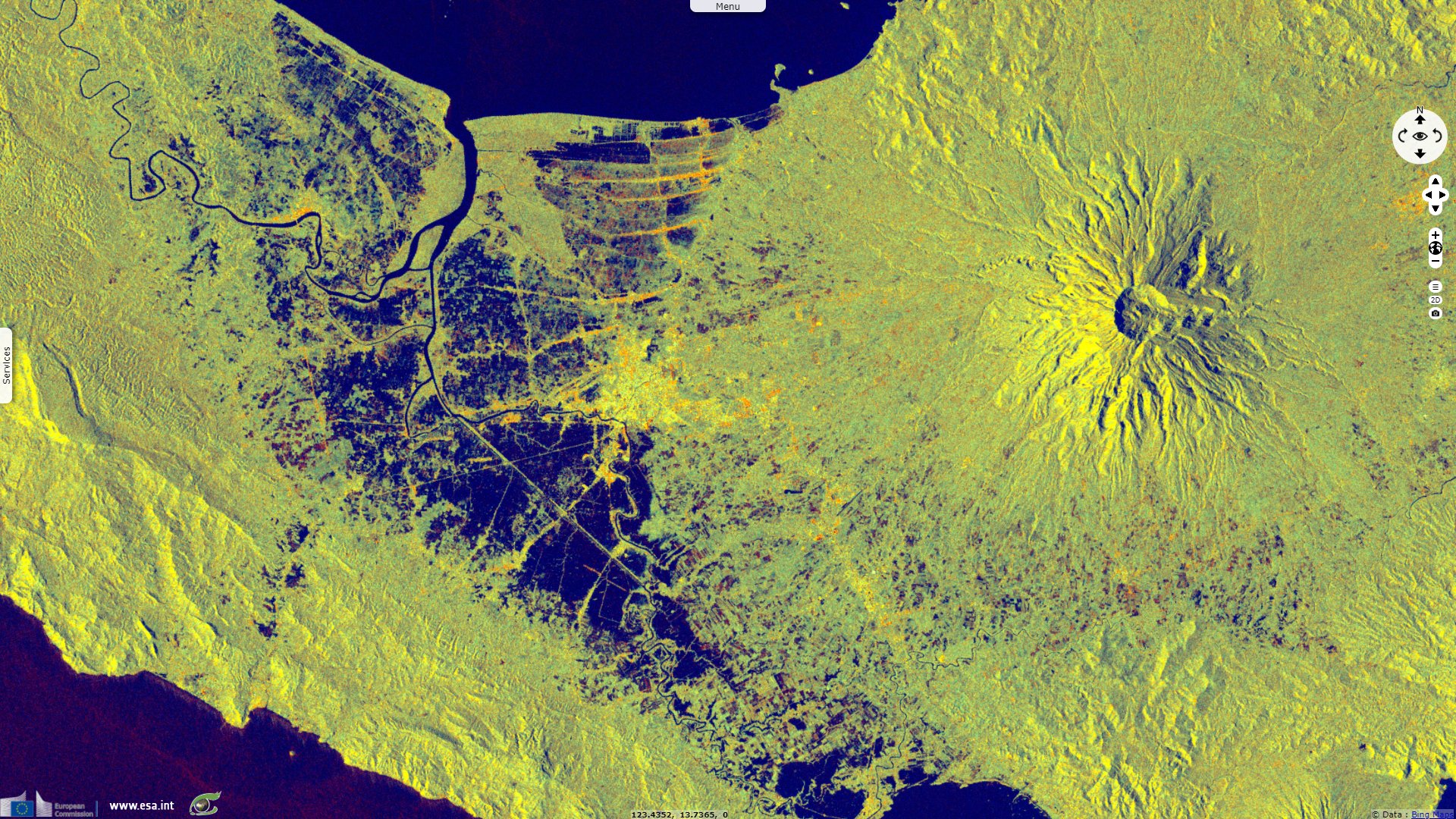