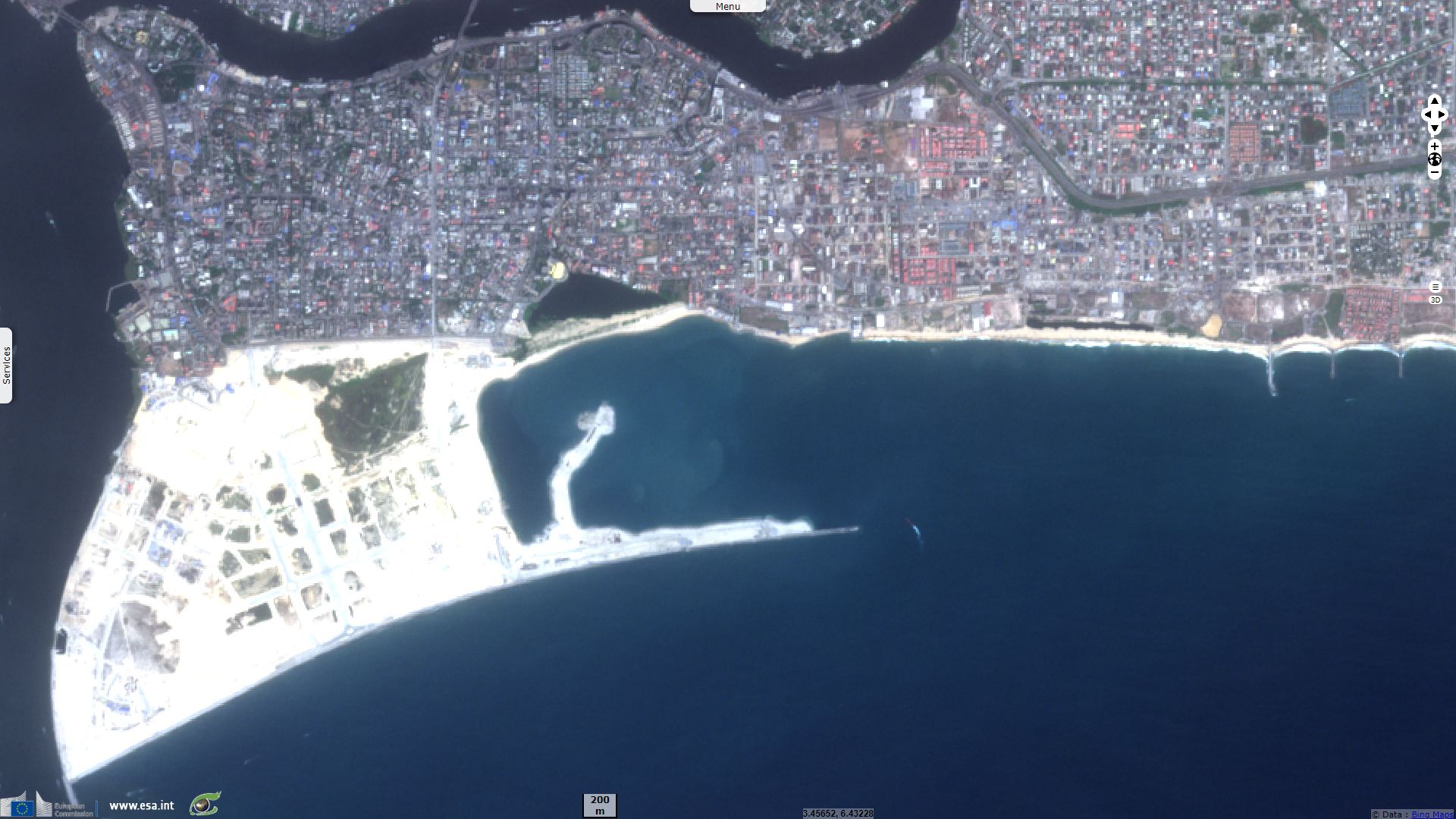 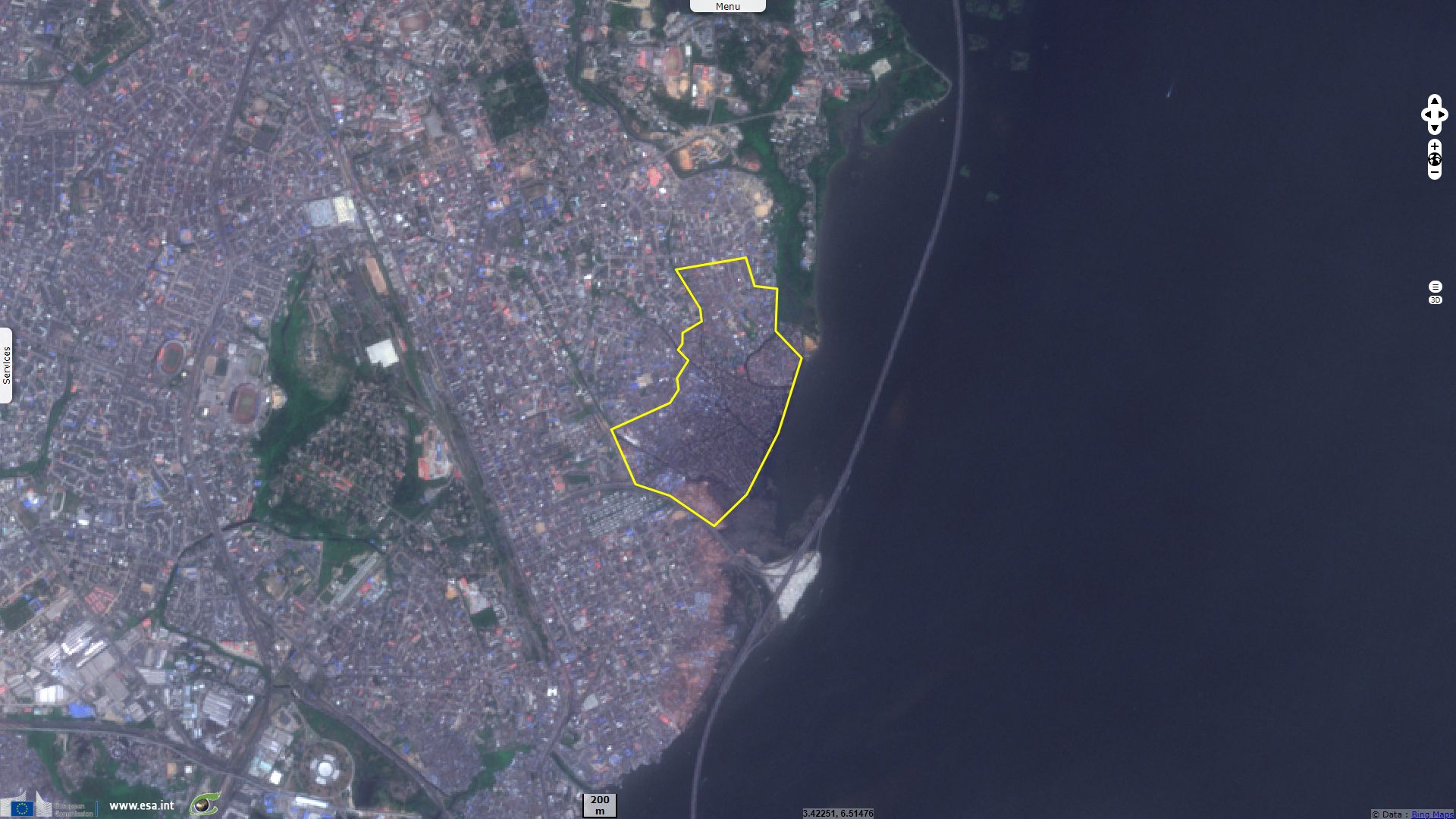 "The biggest and fastest-growing city in Africa’s largest economy, with a new arrival every minute according to the UN. The best estimates of today’s population in Lagos State suggest it has more than 20 million people. The UN predicts that Lagos will be the world’s third-largest city by 2025. The Global Cities Institute predicts a population of 77 million by 2100."
Fig. 3 - S2 (08.12.2015) - 4,3,2 natural colour - Tighly packed, roadless slums next to residential quarters.
2D view 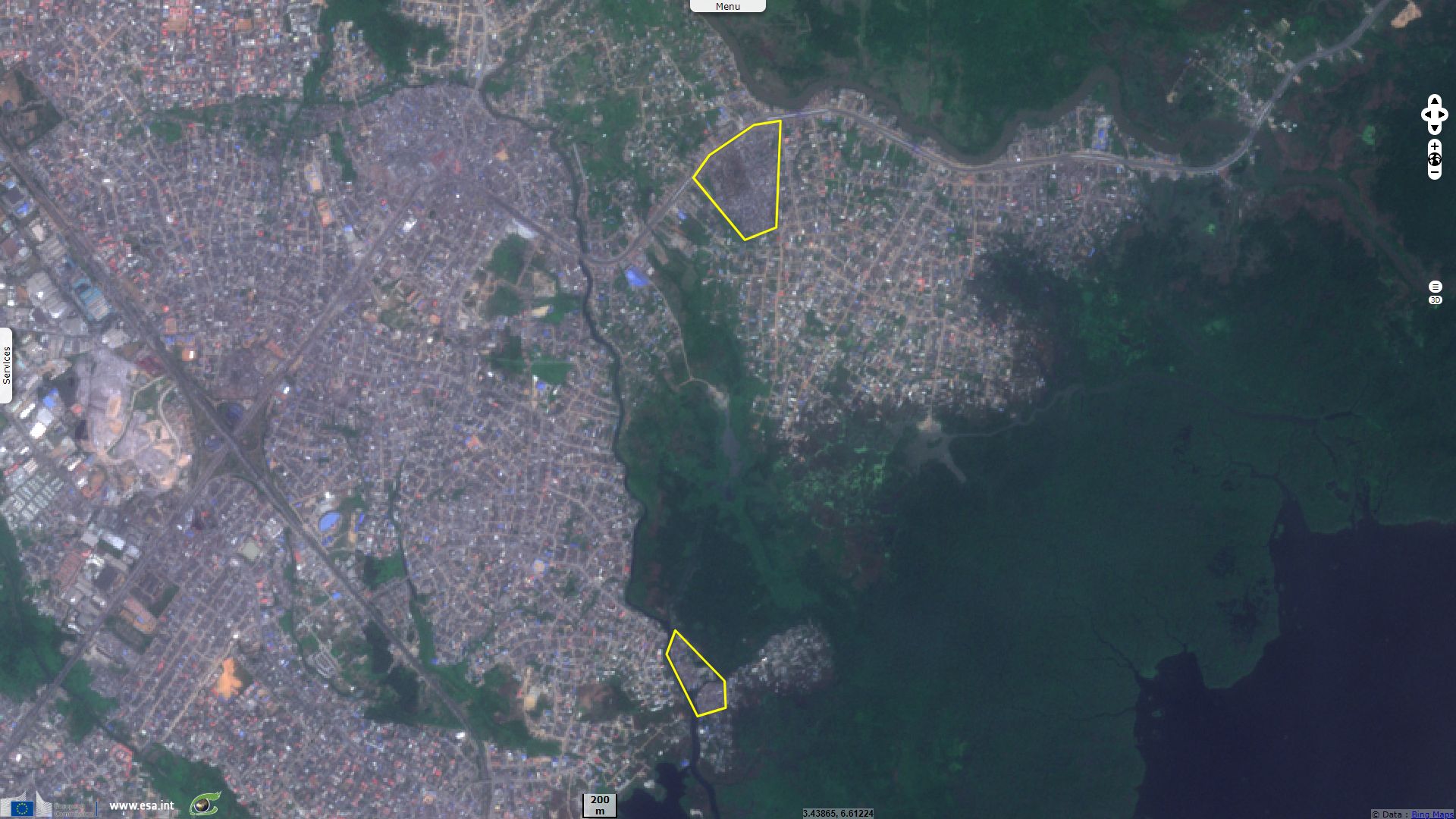 "Nigeria’s epicentre of power and money is a terrain ripe for all types of fantasy, demographic or otherwise. Some see in Lagos slick playboys and ‘subsidy billionaires’ with private jets and yachts. Others see dystopian visions of environmental apartheid, with the 1% pulling up the drawbridge to offshore housing developments such as Eko Atlantic City while the majority of Lagosians languish outside in crime-infested suburbs."
Fig. 4 - S1 - Red: vv (2015), Green: vv (2019), Blue: vv (2015) - Bright green & magenta show new infrastructures in Lagos & Victoria Island.
3D view 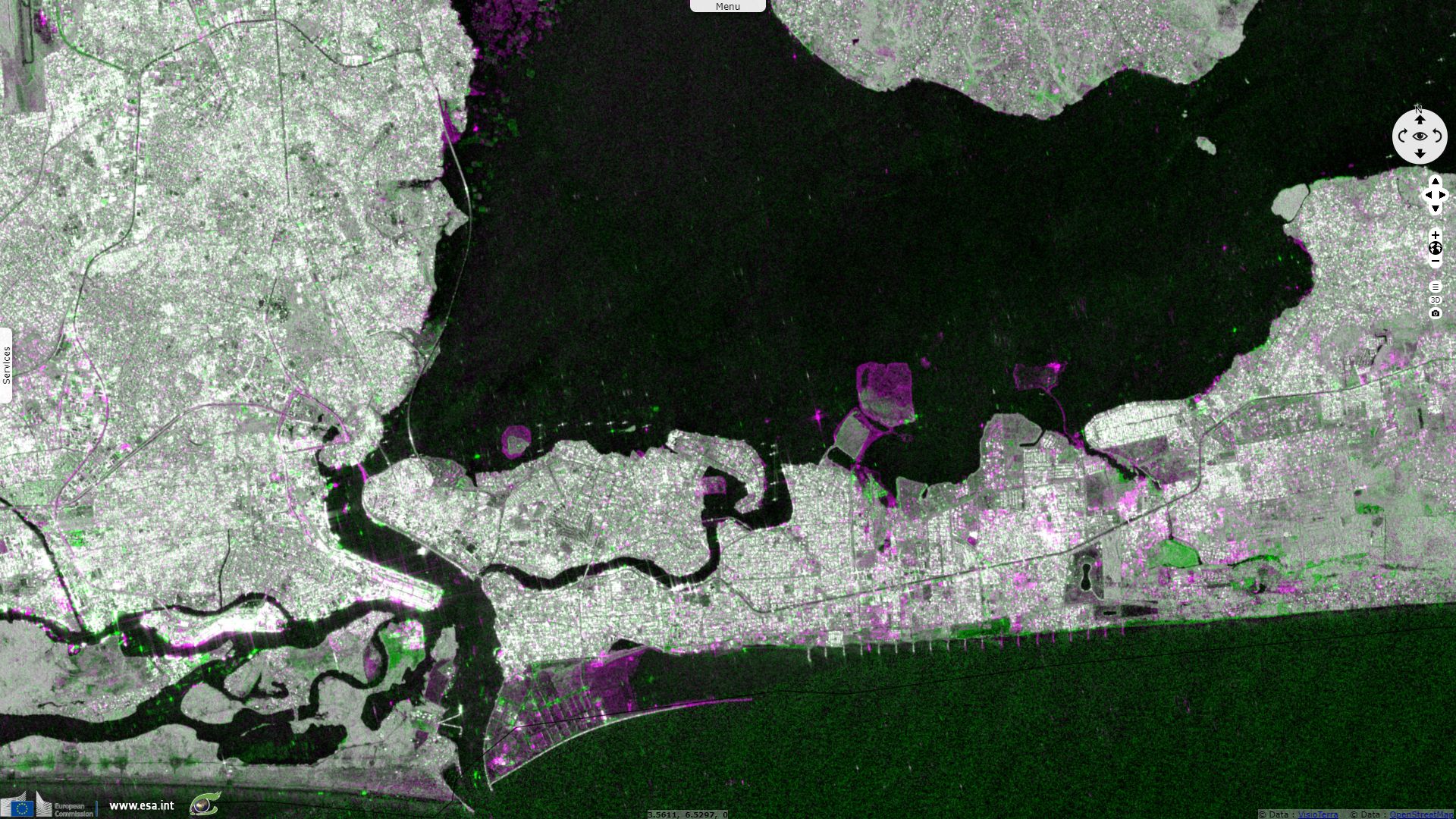 "Omezi has been working on several urban planning projects in Lagos over the past 15 years and says 'transport is the key. Without fixing that, the city is jammed. Everything else – electricity, water and sanitation – can be improvised off the grid to an extent.'" Lagos Island and Victoria Island "twin traffic pinch points – accessible by just three groaning bridges – house key offices, apartments and, importantly, employment. This pressure keeps Lagos at boiling point: pushing up property prices and driving the city out onto the sea and neighbouring states."
Fig. 5 - S2 (08.12.2015) - 12,11,4 colour composite - Lagos in 2015.
3D view

"About 15% of the population lives off the sanitation, power and roads grids. These Lagosians live in informal settlements and slums, paying rents of around N2,000 ($10) per month to stay in rooms where six to eight people live." "Deals are made every day in Lagos, but Andrew Maki of the Lagos-based non-governmental organisation Justice & Empowerment Initiatives worries that property speculation is getting out of control. In an echo of cyclical slum clearance and creation from cities around the world, Maki points to a resurgence of a handful of land-owning families that are behind slum evictions."
Fig. 6 - S2 (06.01.2019) - New luxury residences, new coastal & road infrastructures in 2019.
3D animation 3D view 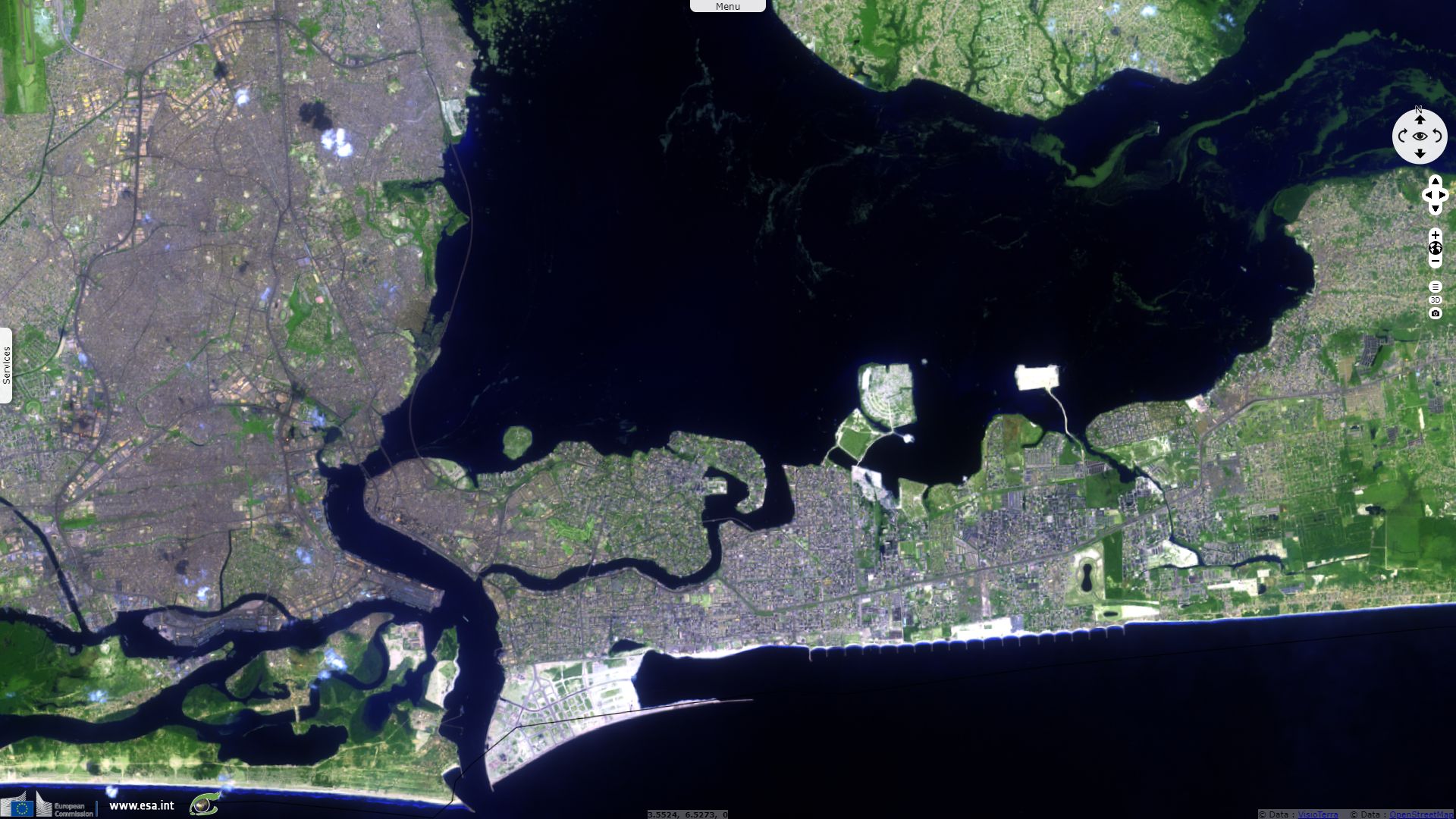 IRIN, originally the "Integrated Regional Information Networks" for the United Nations and now an independent, non-profit media venture wrote about Lagos megalopolis: "Many of the original residents of Makoko are fishermen attracted from across the region to hopes of a better life in Nigeria, West Africa’s oil-rich economic powerhouse. But life is tougher than they had imagined."
"'I moved here to fish, to set up a business,' said Martins Oke, in his 70s, who left his village on the Benin border when he was a small boy. 'But some days I don’t even catch a single fish.'" "Many Makoko residents have been here for generations, losing touch with family back home. Pride stops others from returning to their communities empty handed. Despite the hardship, every year more and more people come to Lagos."
Fig. 7 - S2 (08.12.2015) - 12,11,4 colour composite - South-east of Lagos along the Atlantic coast, the city of Lekki is merging with Lagos.
3D view 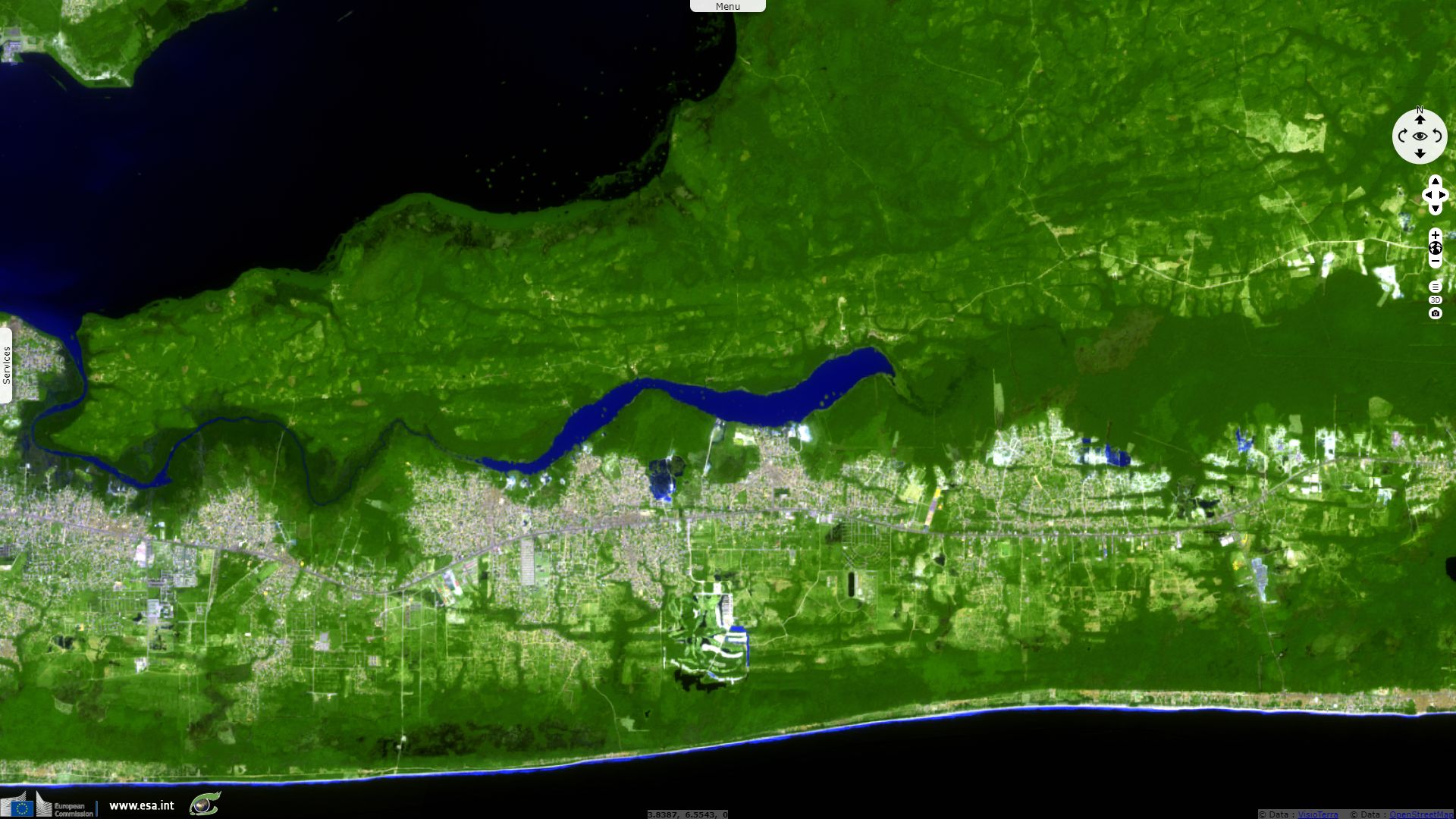 "It is already one of the world’s mega-cities – a crime-ridden, seething mass of some 15 million people crammed into the steamy lagoons of southwest Nigeria. Two out of three Lagos residents live in a slum with no reliable access to clean drinking water, electricity, waste disposal - even roads."
Fig. 8 - S2 (06.01.2019) - In 2019, the coastal forest regressed in favour of cities & agriculture.
3D animation 3D view 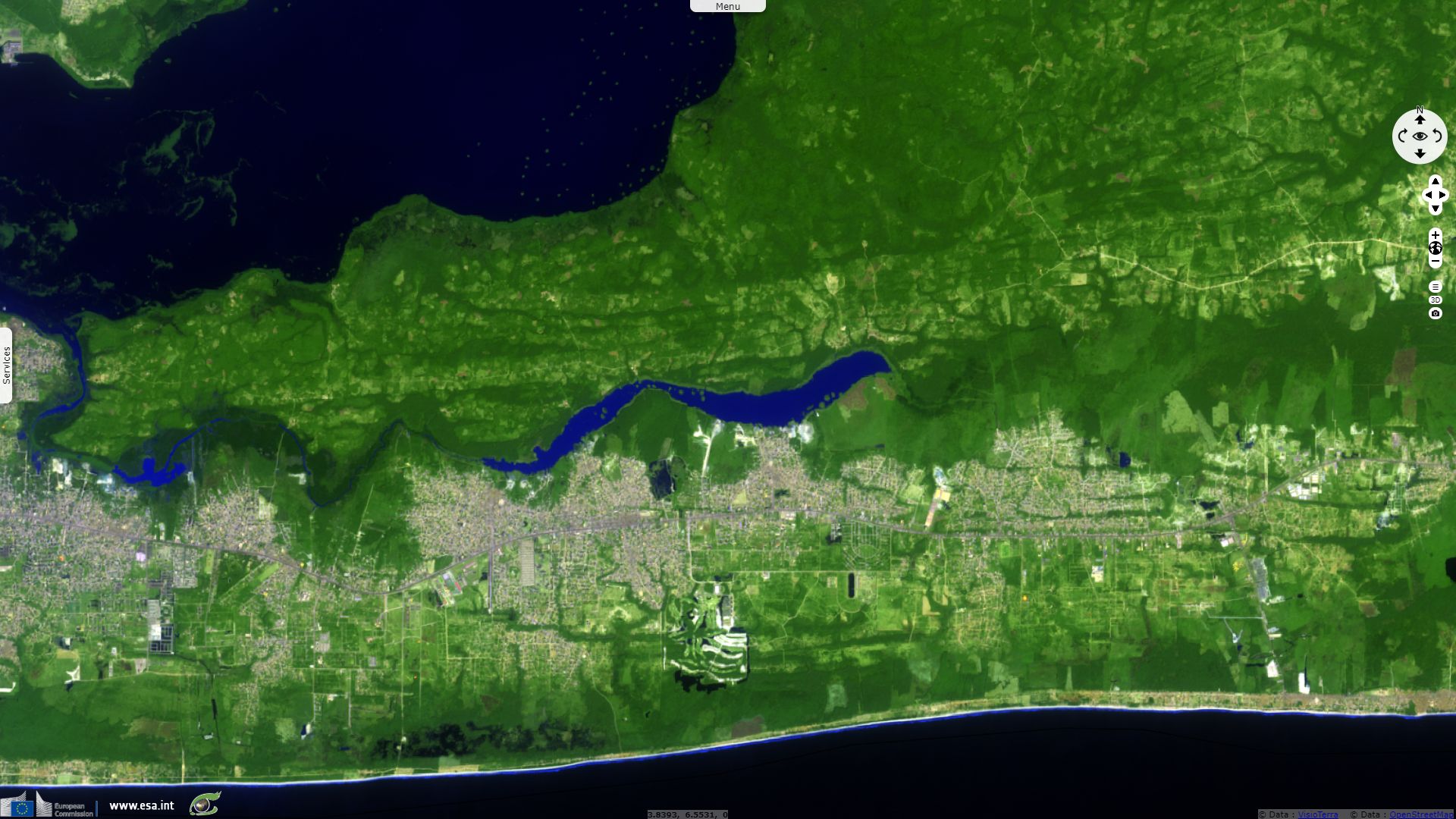 "As the city population swells by up to eight percent every year, the slums and their associated problems are growing." "'By 2015 Lagos will be the third largest city in the world but it has less infrastructure than any of the world’s other largest cities,' said Francisco Bolaji Abosede, Lagos Commissioner for Town Planning and Urbanisation."
Fig. 9 - S1 (mean from 03.04.2015 to 14.06.2015) - vv,vh,vv colour composite - Eastern part of Lekki.
3D view 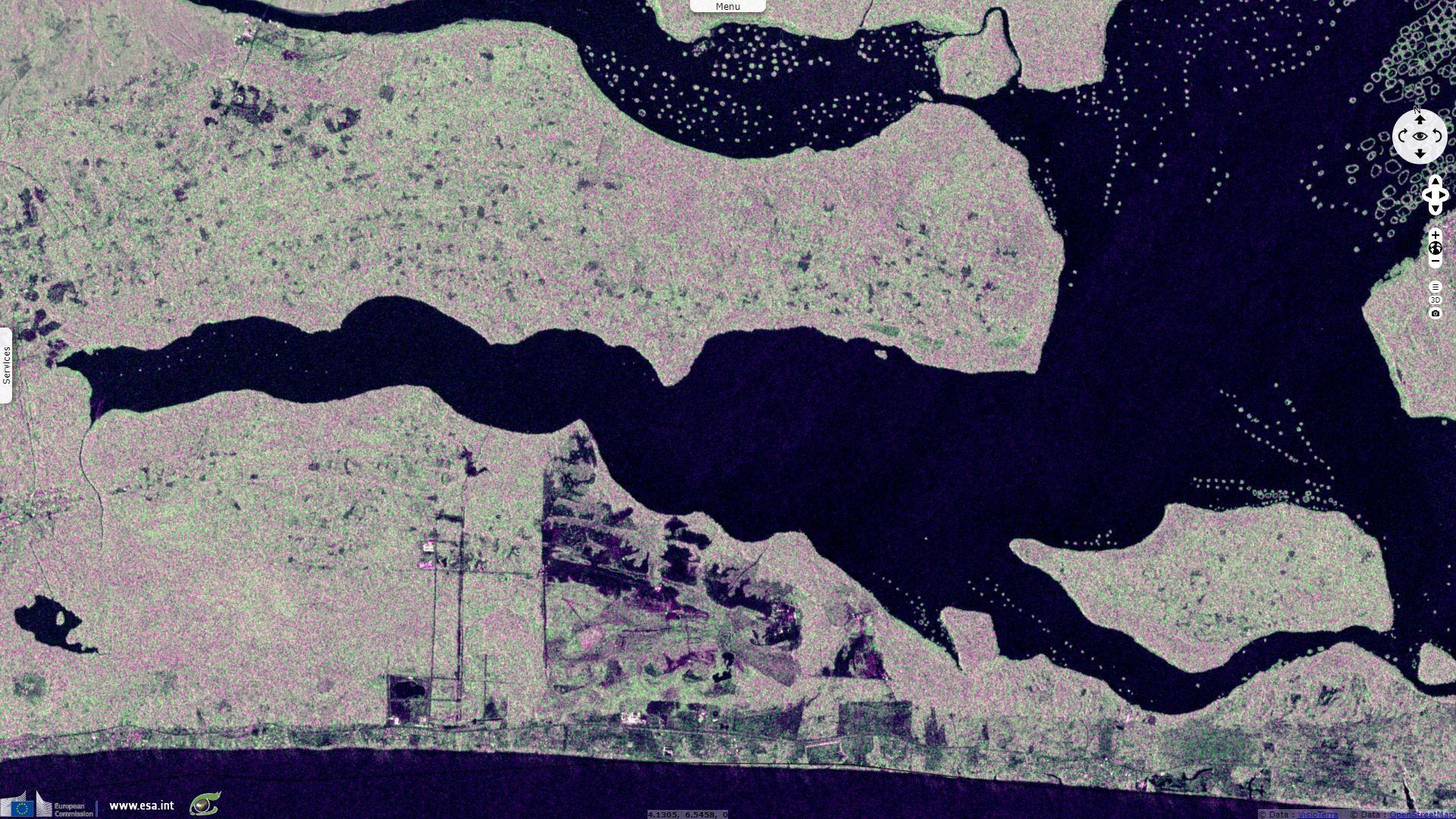 "Since President Olusegun Obasanjo’s elected government came to power in 1999, ending 15 years of military rule, millions of dollars have been spent on urban regeneration and projects aimed at reducing crime, but results have been poor."
Fig. 10 - S1 (mean from 05.02.2019 to 13.03.2019) - A large extension developed within 3 years.
3D animation 3D view 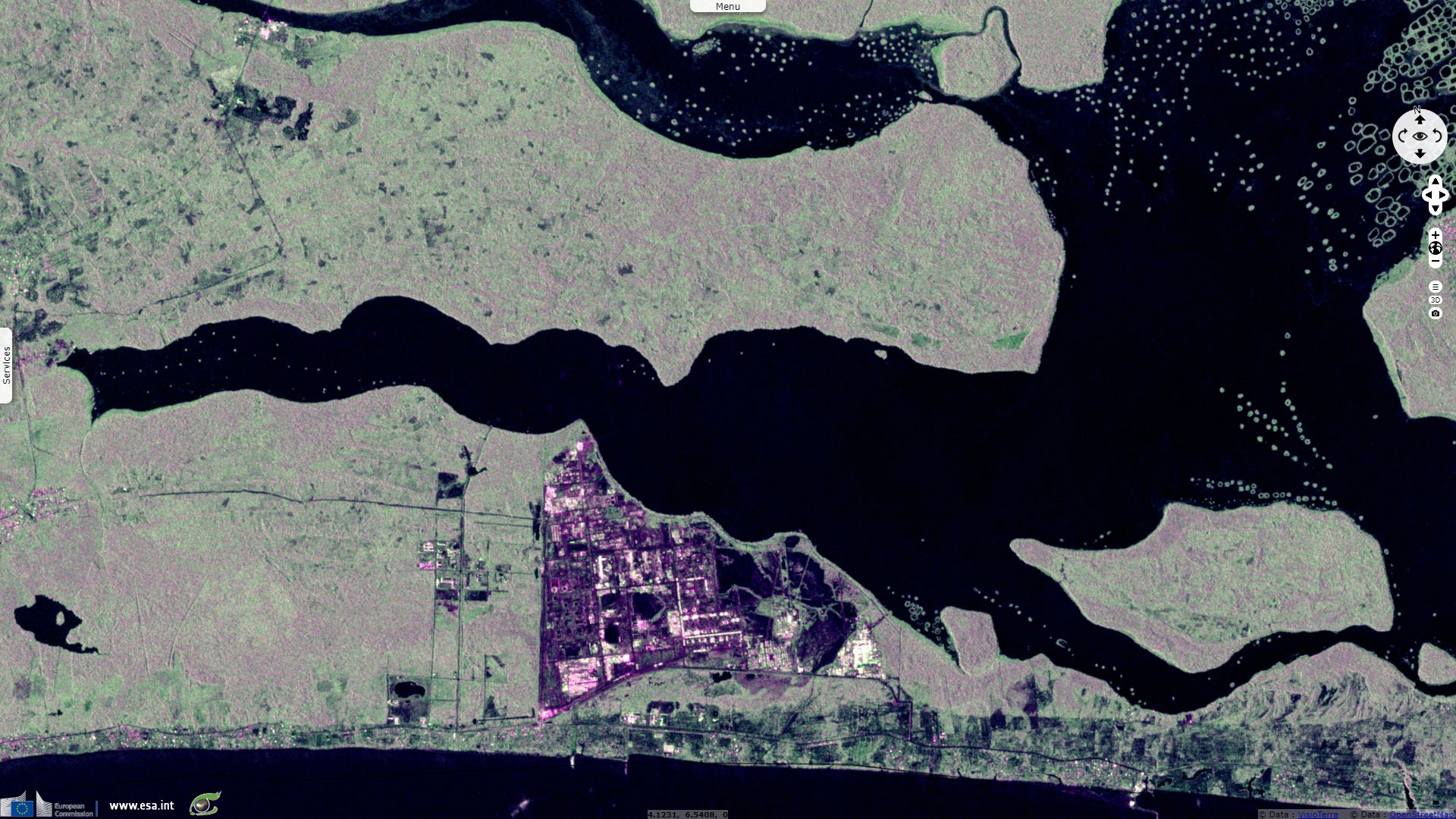 "Security forces rarely venture into Makoko, except perhaps for the occasional demolition of shanty houses. Instead, security is provided by 'Area Boys', self-styled vigilante groups made up of unemployed young men that defend their territory with threats and often violence."
Fig. 11 - S2 (08.12.2015) - 12,11,4 colour composite - North-east boundary of Lagos.
3D view 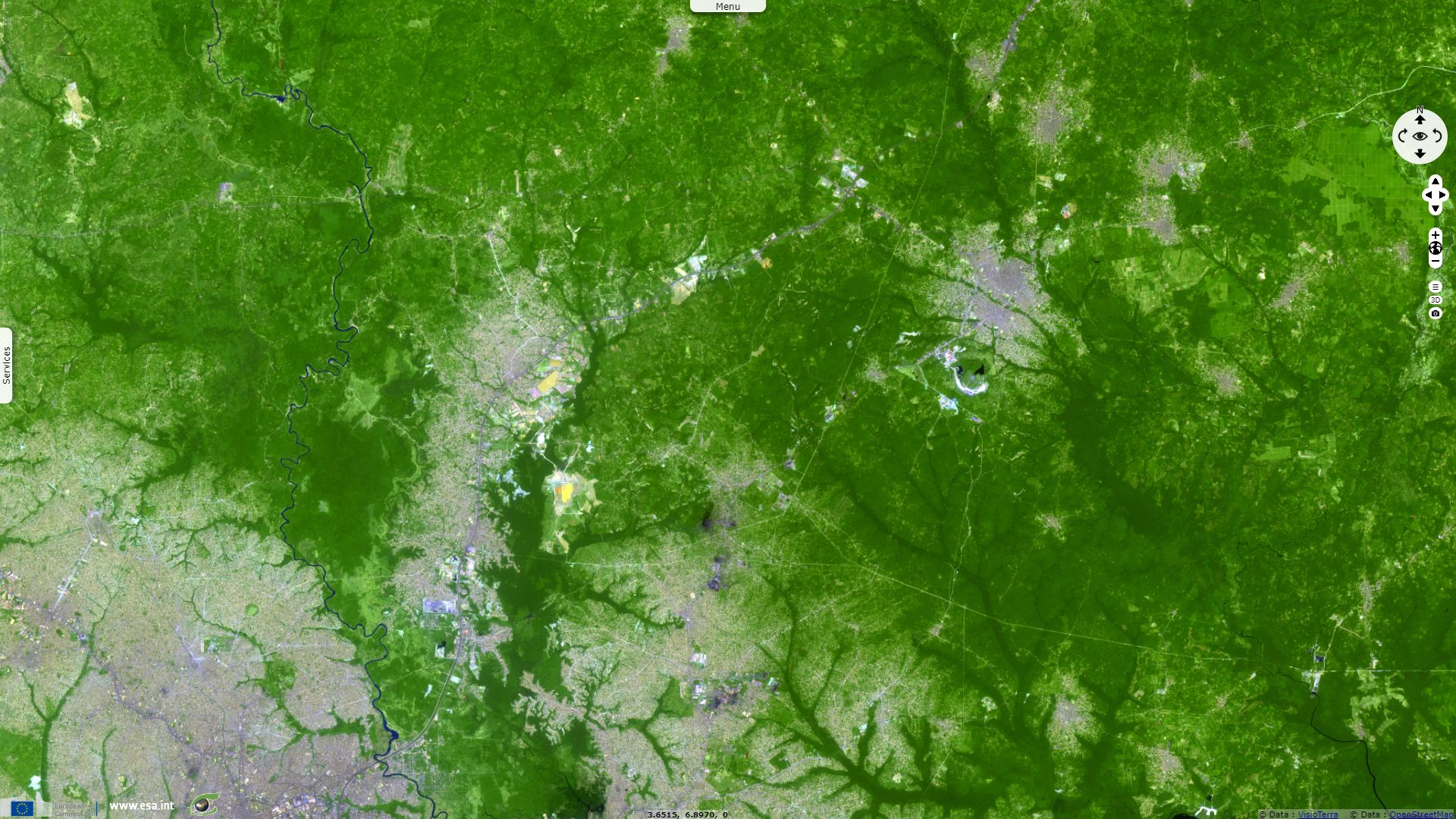 "Nigeria is one of the most corrupt countries in the world, according to international NGO Transparency International. Since independence in 1960, billions of dollars of Nigeria’s oil revenue have been siphoned from state and government coffers into Swiss bank accounts of the country’s rulers."
Fig. 12 - S2 (06.01.2019) - Deforestation with urban growth, development of the road network & extension of cropland.
3D animation 3D view 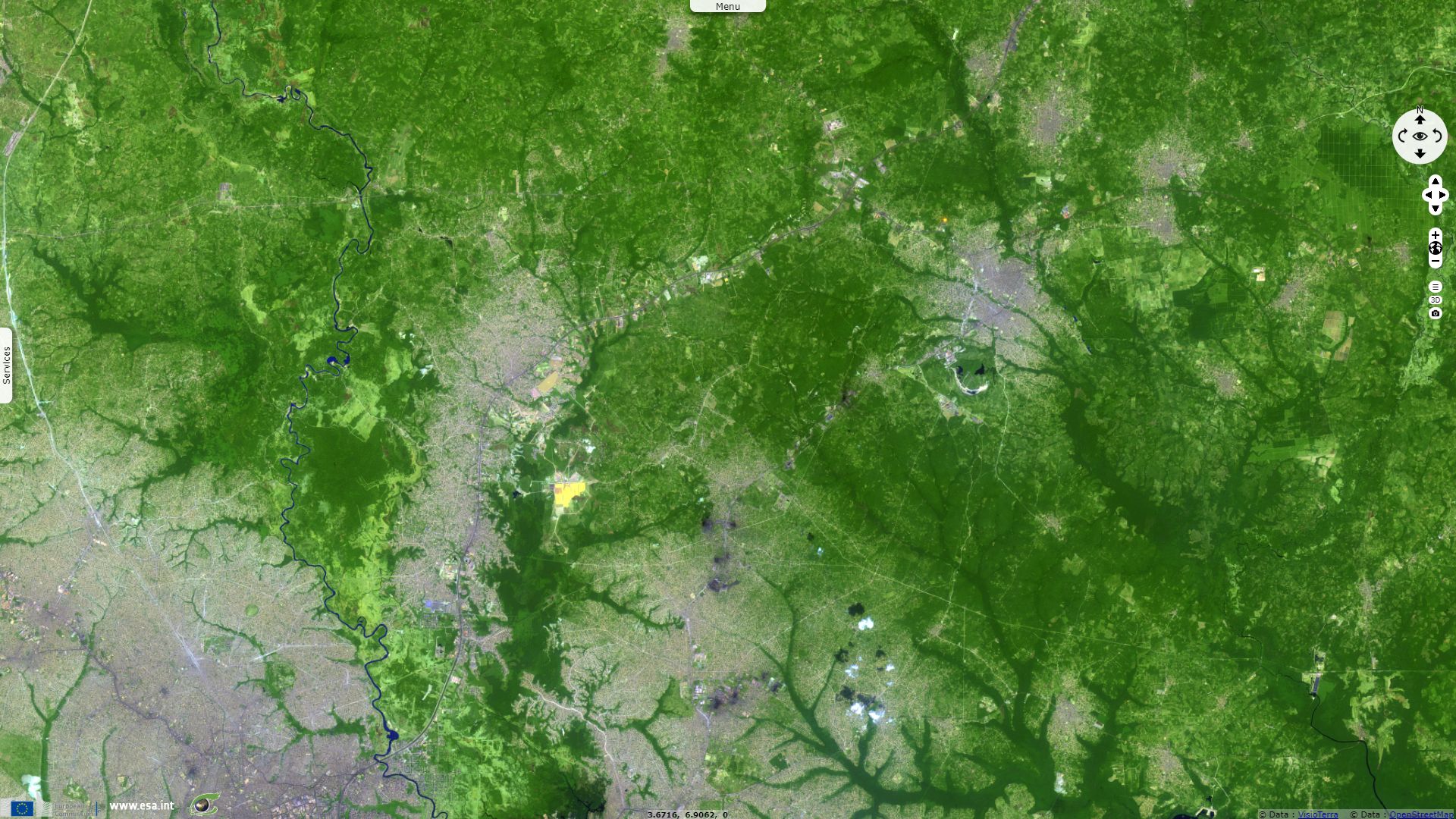 "Nigeria’s rampant corruption and lack of enforced regulations have enabled buildings to go up unchecked – only 30 percent of houses in the city have an approved building plan." "The Ebute-Metta area of Lagos is a short drive inland from Makoko. New buildings are falling down almost as fast as they are going up. Poor workmanship and corrupt inspectors means that buildings less than five years old are collapsing, sometimes crushing to death whole families inside."
Fig. 13 - S1 (mean from 03.04.2015 to 14.06.2015) - vv,vh,vv colour composite - Mining city in the north-west suburb of Lagos.
2D view 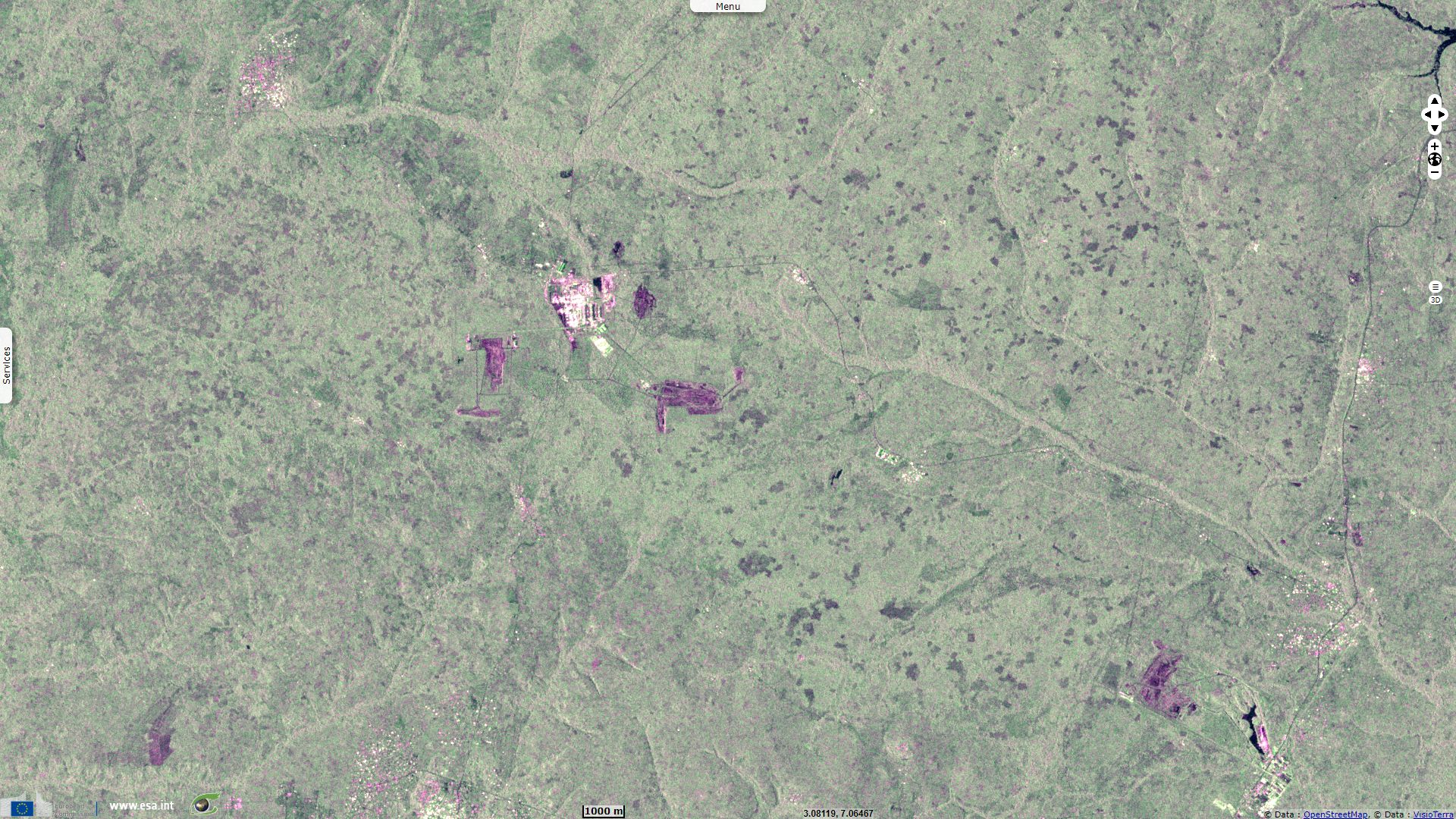 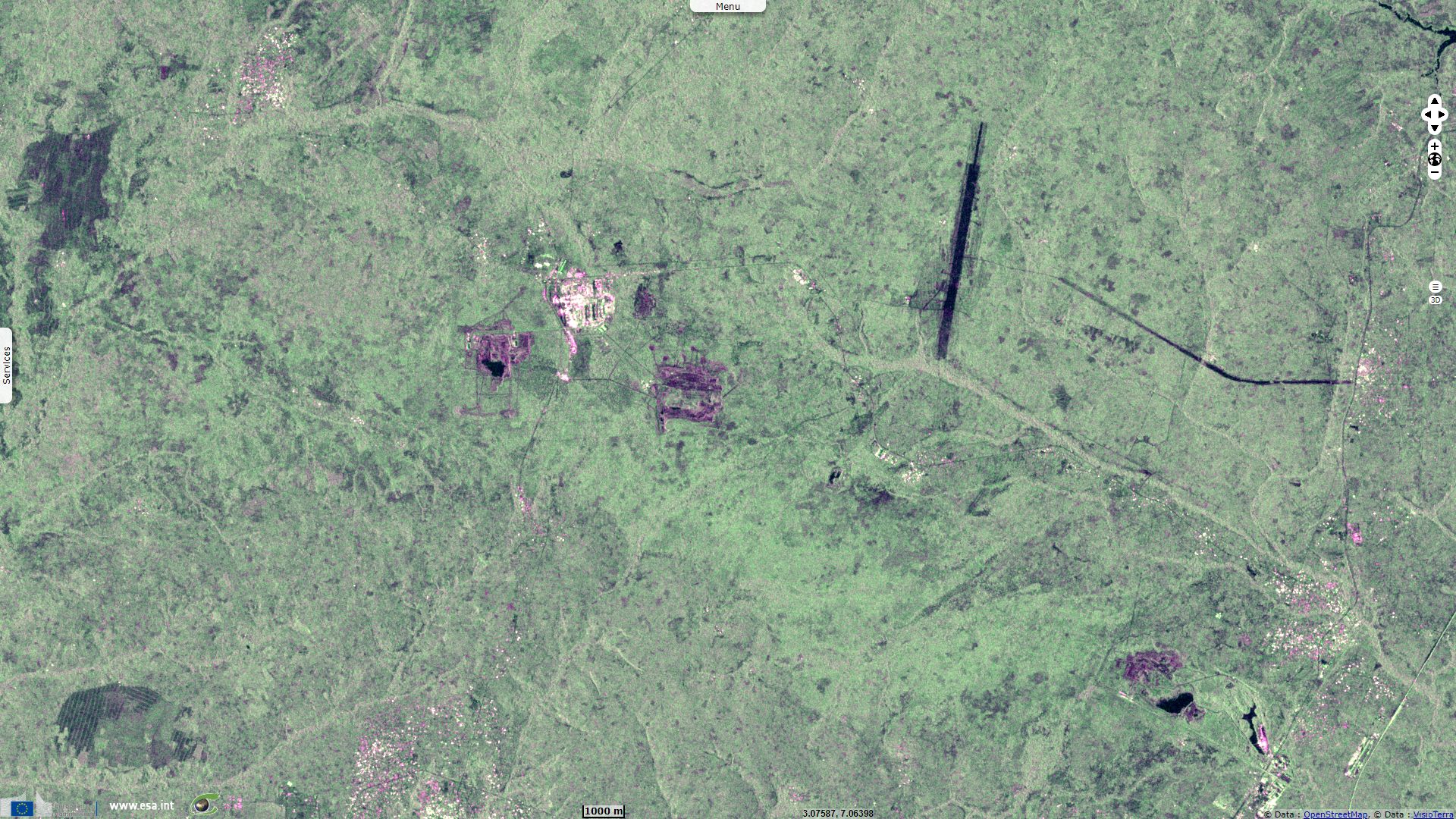