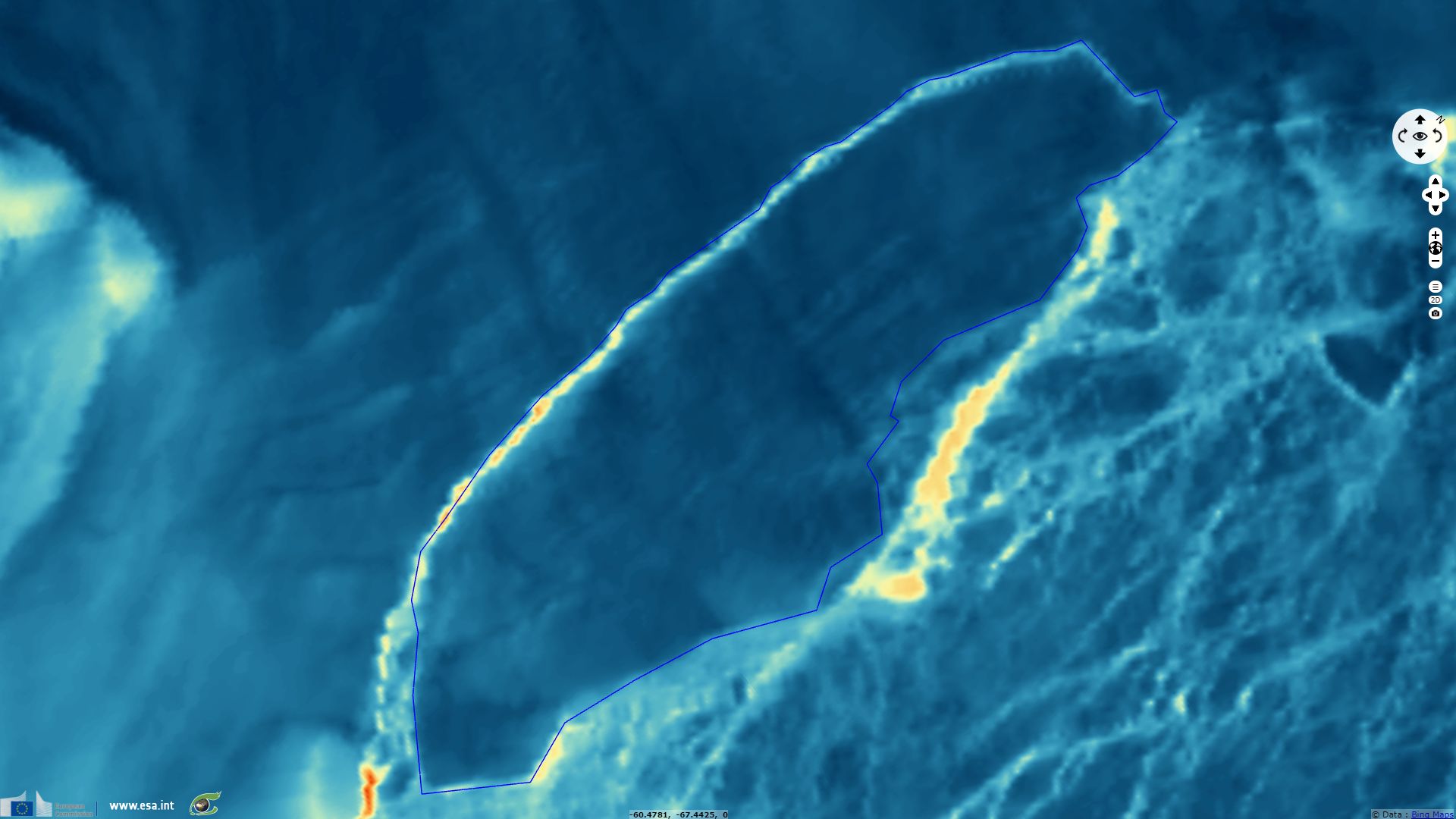 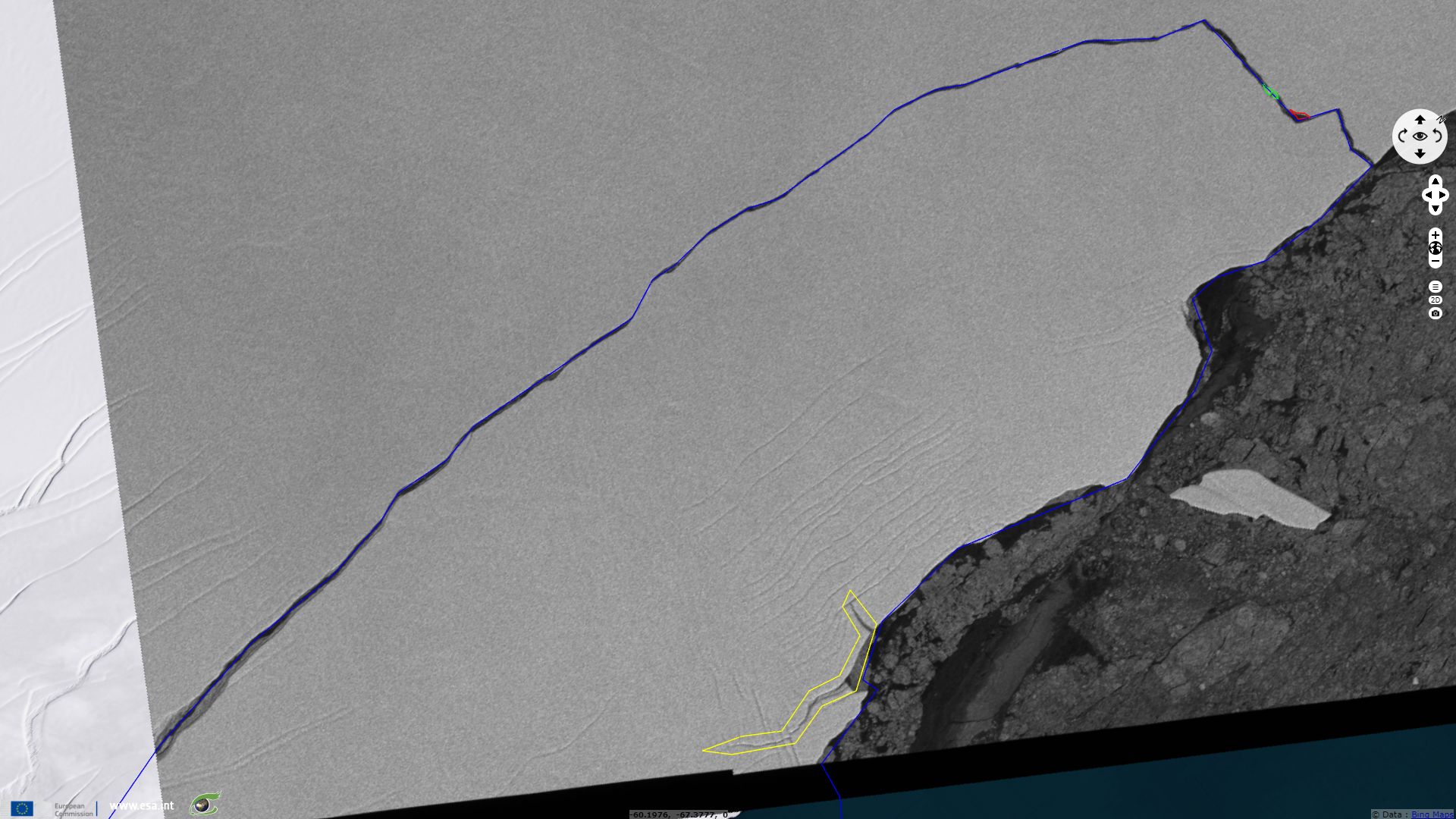 This Sentinel-1 image from the 13/07/2017 shows many shallow cracks than run in parallel lines as well as deeper cracks that could spread and further split the iceberg. The two blocs match still match very wells save for a smaller bloc on the North that already moved several kilometers. The image can be compared to the evolution of the Larsen-C rift from November 2014 to November 2016 showed in the EVT-055.
Fig. 3 - S3 SRAL (08.07.2017 front, 12.07.2017 back) - 20Hz peakiness coefficient: C-band in black, Plrm Ku-band in rainbow, Ku-band in pink.
3D view 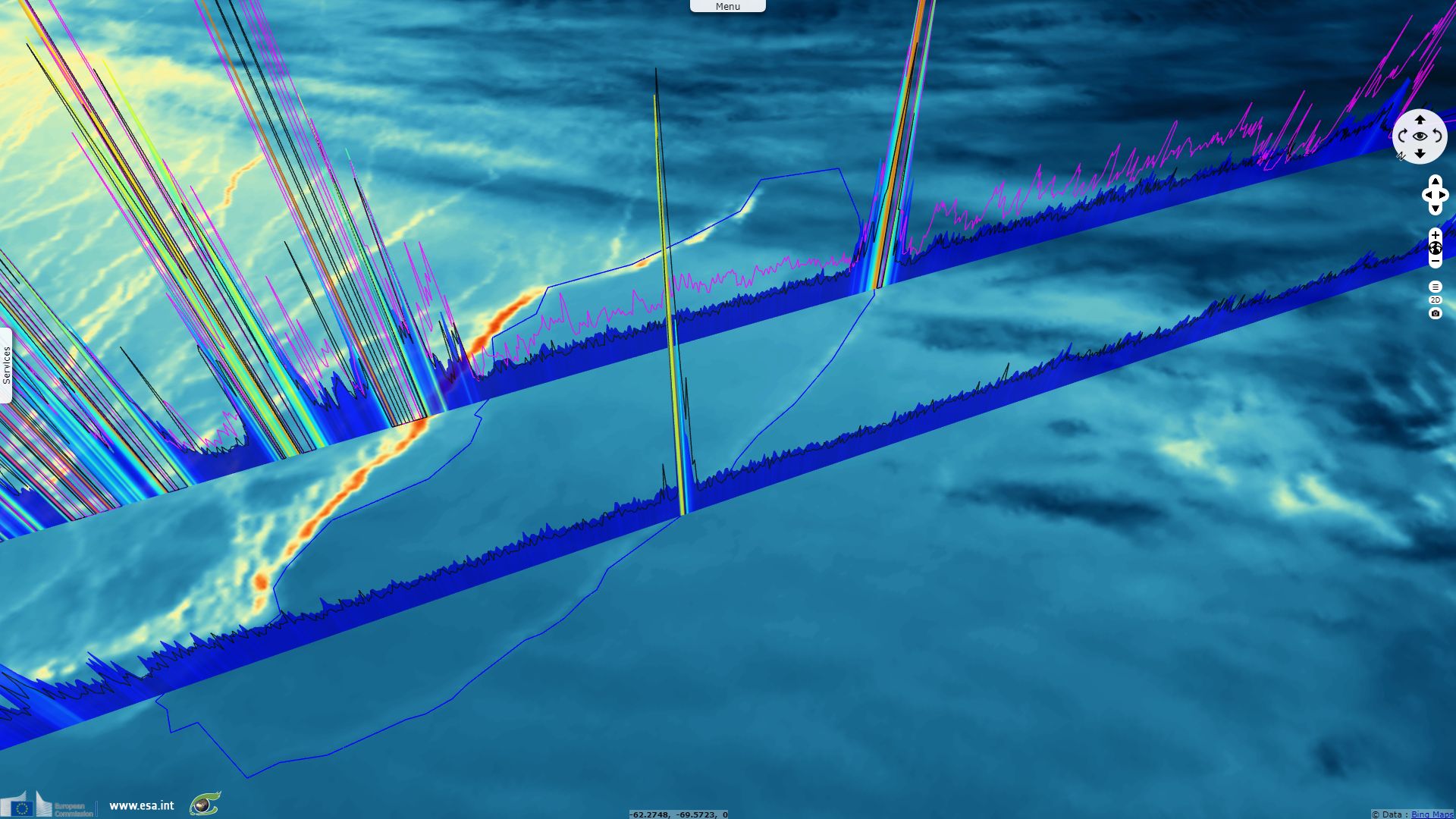 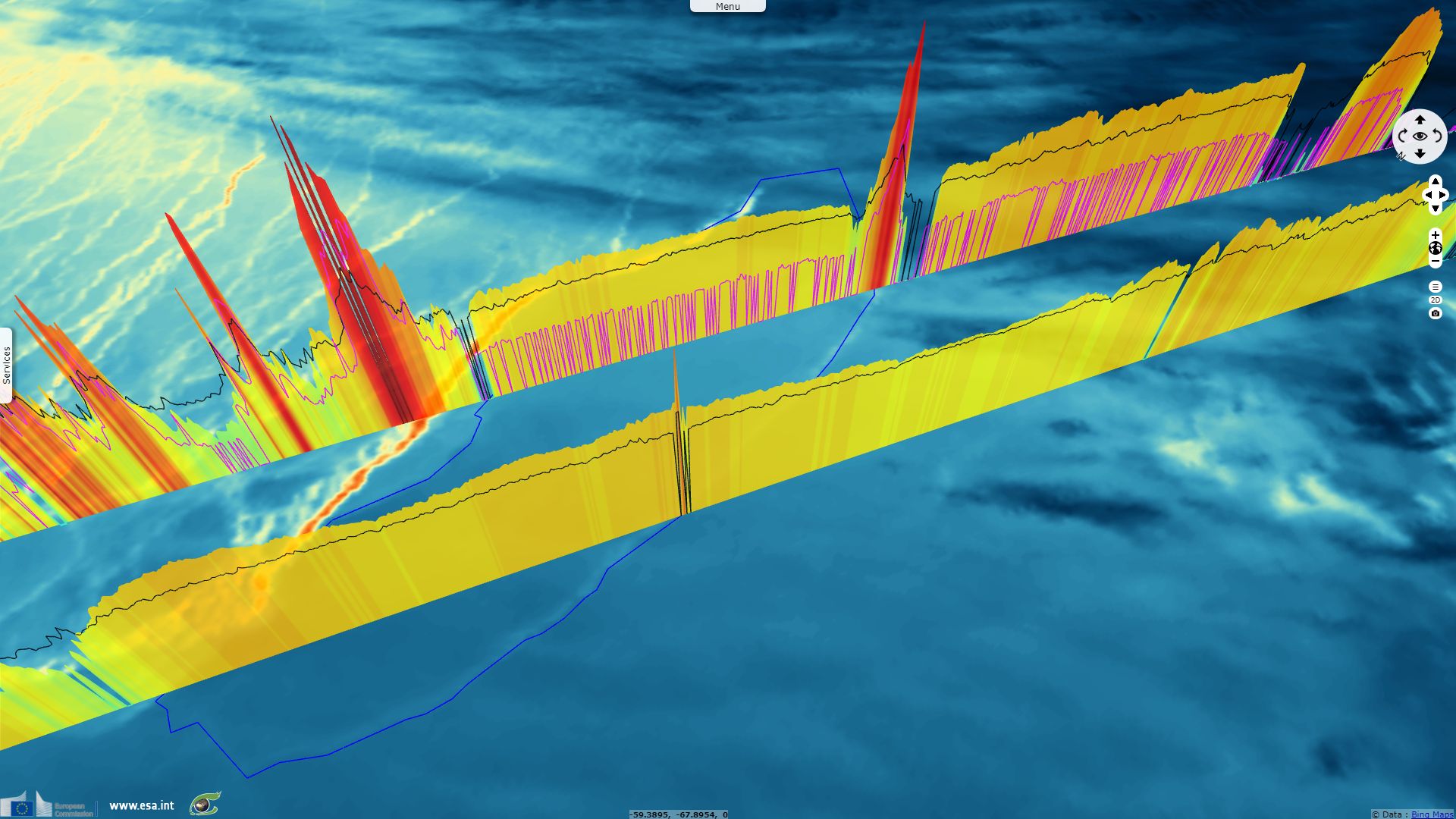 Dr Martin O'Leary of University Swansea described the event on the MIDAS project blog: "A one trillion tonne iceberg – one of the biggest ever recorded - has calved away from the Larsen C Ice Shelf in Antarctica. The calving occurred sometime between Monday 10th July and Wednesday 12th July 2017, when a 5,800 square km section of Larsen C finally broke away. The iceberg, which is likely to be named A68, weighs more than a trillion tonnes. Its volume is twice that of Lake Erie, one of the Great Lakes."
Fig. 5 - Map of the Larsen-C rift development until May 31st 2017 by Prof. Adrian Luckman of Swansea University. 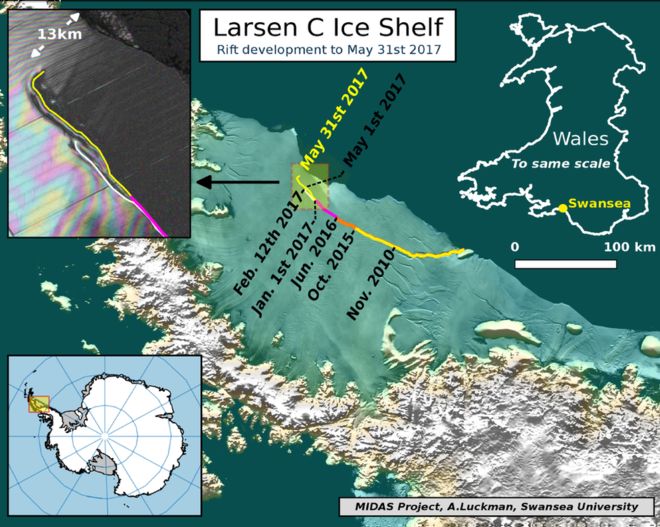 Dr Martin O'Leary of University Swansea added: " The iceberg weighs more than a trillion tonnes (1,000,000,000,000 tonnes), but it was already floating before it calved away so has no immediate impact on sea level. The calving of this iceberg leaves the Larsen C Ice Shelf reduced in area by more than 12%, and the landscape of the Antarctic Peninsula changed forever. Although the remaining ice shelf will continue naturally to regrow, Swansea researchers have previously shown that the new configuration is potentially less stable than it was prior to the rift. There is a risk that Larsen C may eventually follow the example of its neighbour, Larsen B, which disintegrated in 2002 following a similar rift-induced calving event in 1995. [...] The Larsen C Ice Shelf, which has a thickness of between 200 and 600 metres, floats on the ocean at the edge of The Antarctic Peninsula, holding back the flow of glaciers that feed into it."
Fig. 6 - Aerial photograph of the rift by John Sonntag for NASA. 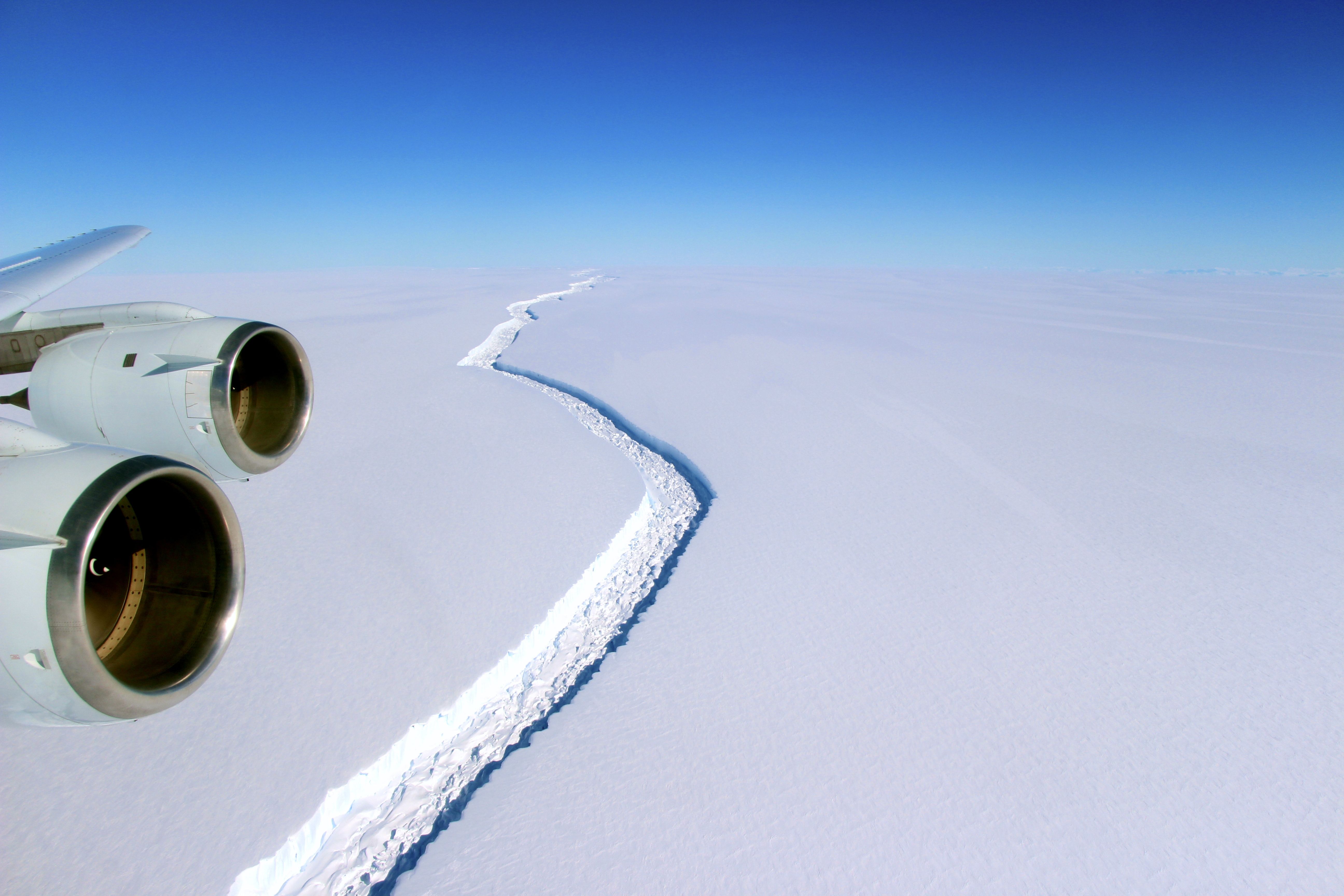 The MIDAS project blog includes a citation of Professor Adrian Luckman of Swansea University, lead investigator of the MIDAS project, who said: "We have been anticipating this event for months, and have been surprised how long it took for the rift to break through the final few kilometres of ice. We will continue to monitor both the impact of this calving event on the Larsen C Ice Shelf, and the fate of this huge iceberg. The iceberg is one of the largest recorded and its future progress is difficult to predict. It may remain in one piece but is more likely to break into fragments. Some of the ice may remain in the area for decades, while parts of the iceberg may drift north into warmer waters. The recent development in satellite systems such as Sentinel-1 and MODIS have vastly improved our ability to monitor events such as this."
The views expressed herein can in no way be taken to reflect the official opinion of the European Space Agency or the European Union.
Contains modified Copernicus Sentinel data 2021, processed by VisioTerra.