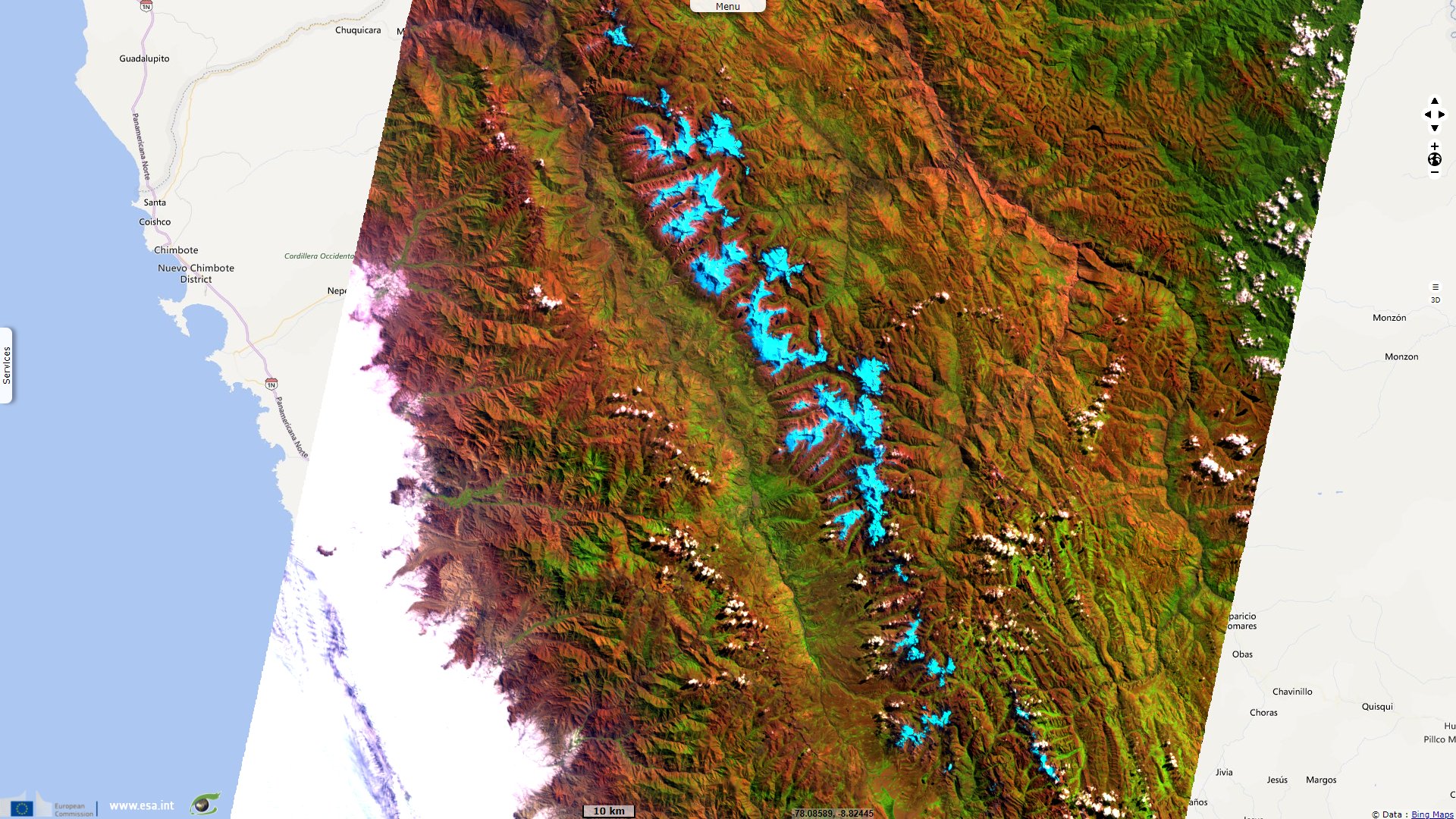 Huascaran National Park makes the most of the Cordillera Blanca in Peru, a mountain range at the equator which snow capped peaks exceed 6000 meters. It is a UNESCO World Heritage site described as follows by its sheet: "Situated in the aptly named Cordillera Blanca ("White Mountains"), Huascaran National Park protects the heart of the World's highest tropical mountain range in the central Peruvian Andes. The property of 340 000 hectares covers a diverse mountain landscape from around 2500#8239;m.a.s.l. and culminating in 27 snow-capped peaks above 6000 m.a.s.l. It includes the spectacular Nevado Huascaran (Mount Huascaran), Peru's highest peak at 6768 m.a.s.l., as the property named after the 16th Century Inca leader Huascar. The snow-covered peaks, the numerous tropical glaciers and glacial lakes, the high plateaus intersected by deep ravines with torrential creeks and the variety of vegetation types form a spectacular landscape of rare beauty."
Fig. 2 - S2 (23.06.2018) - It counts numerous summits and glaciers that are part of the Huascaran National Park, a UNESCo World Heritage.
2D view 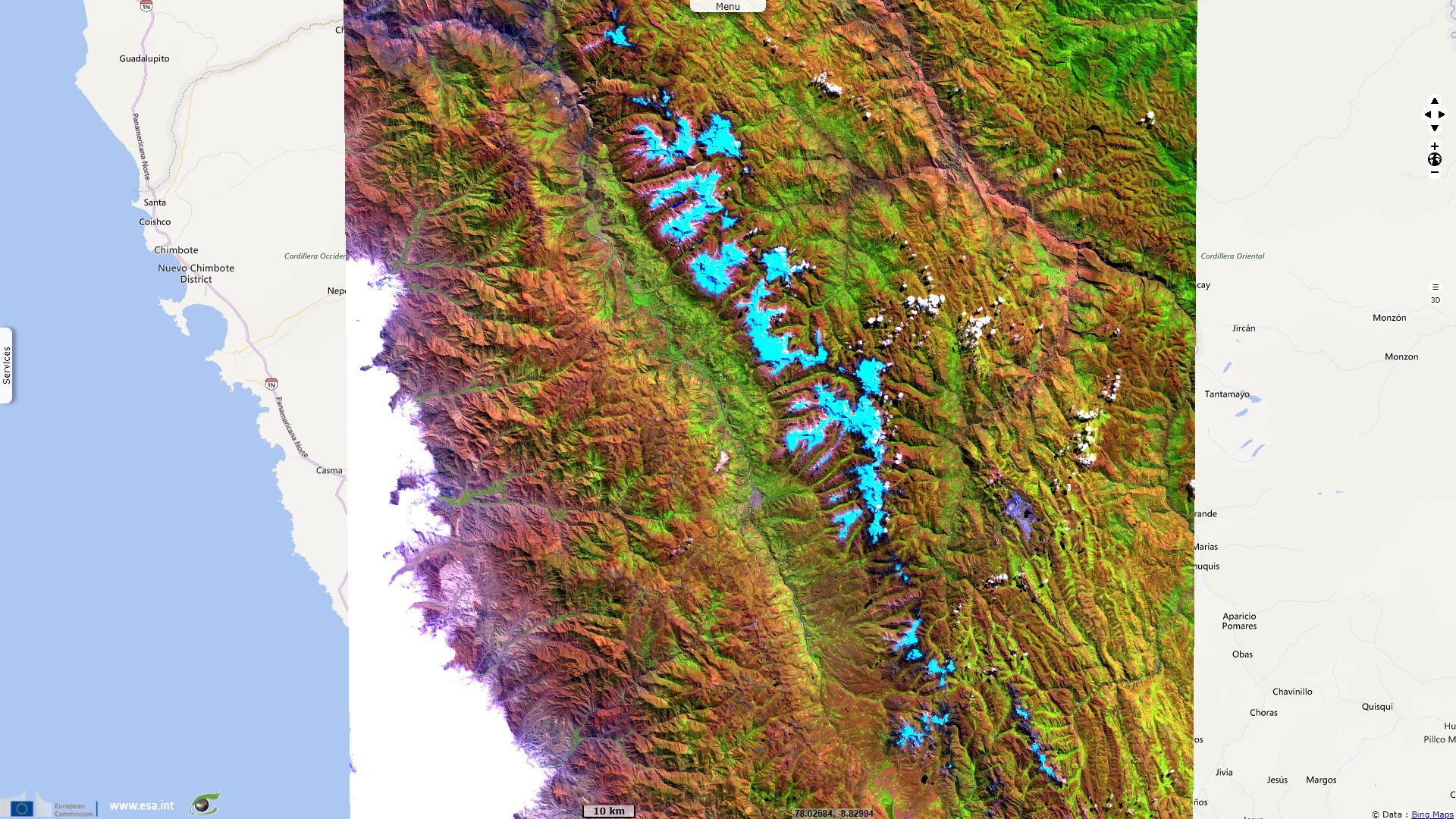 "Appreciating the geomorphology and striking landscape beauty it is easy to overlook that the property also boasts noteworthy ecosystem and biodiversity values. The wide range of ecosystems and vegetation types includes small pockets of montane tropical forests in some of the lower elevations and valleys. Diverse types of Paramo and Puna grasslands and scrublands are the dominant vegetation types in the property, at higher elevations transitioning into tropical tundra."
Fig. 3 - Landsat-5 (15.05.1987) - The Normalized Difference Snow Index computed in May 1987 shows the snow cover at the time.
2D view 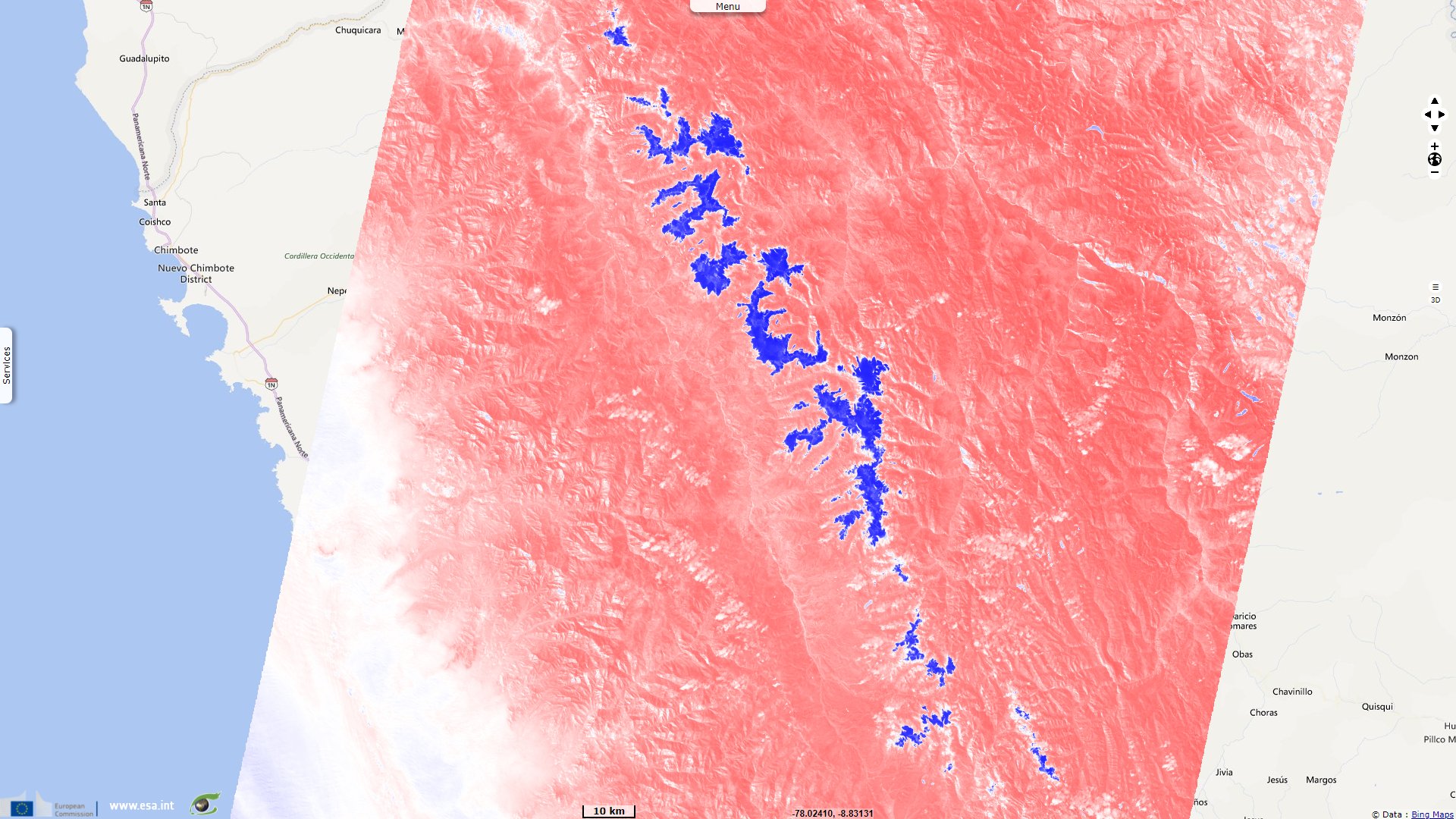 "Huascaran National Park is home to the emblematic Vicuna, which was close to extinction in the 1960s but has since recovered, one of the most spectacular conservation successes in South America. Other charismatic mammals include the North Andean Deer, Puma or Mountain Lion, the vulnerable Spectacled Bear and the endangered Andean Mountain Cat. The avifauna boasts more than 100 recorded species, among them the Andean Condor and the Giant Hummingbird. Around 800 plant species have been documented, the most famous being the endangered Queen of the Andes, known for its giant flower-spike."
Fig. 4 - S2 (23.06.2018) - Same processing applied 21 years later.
2D view 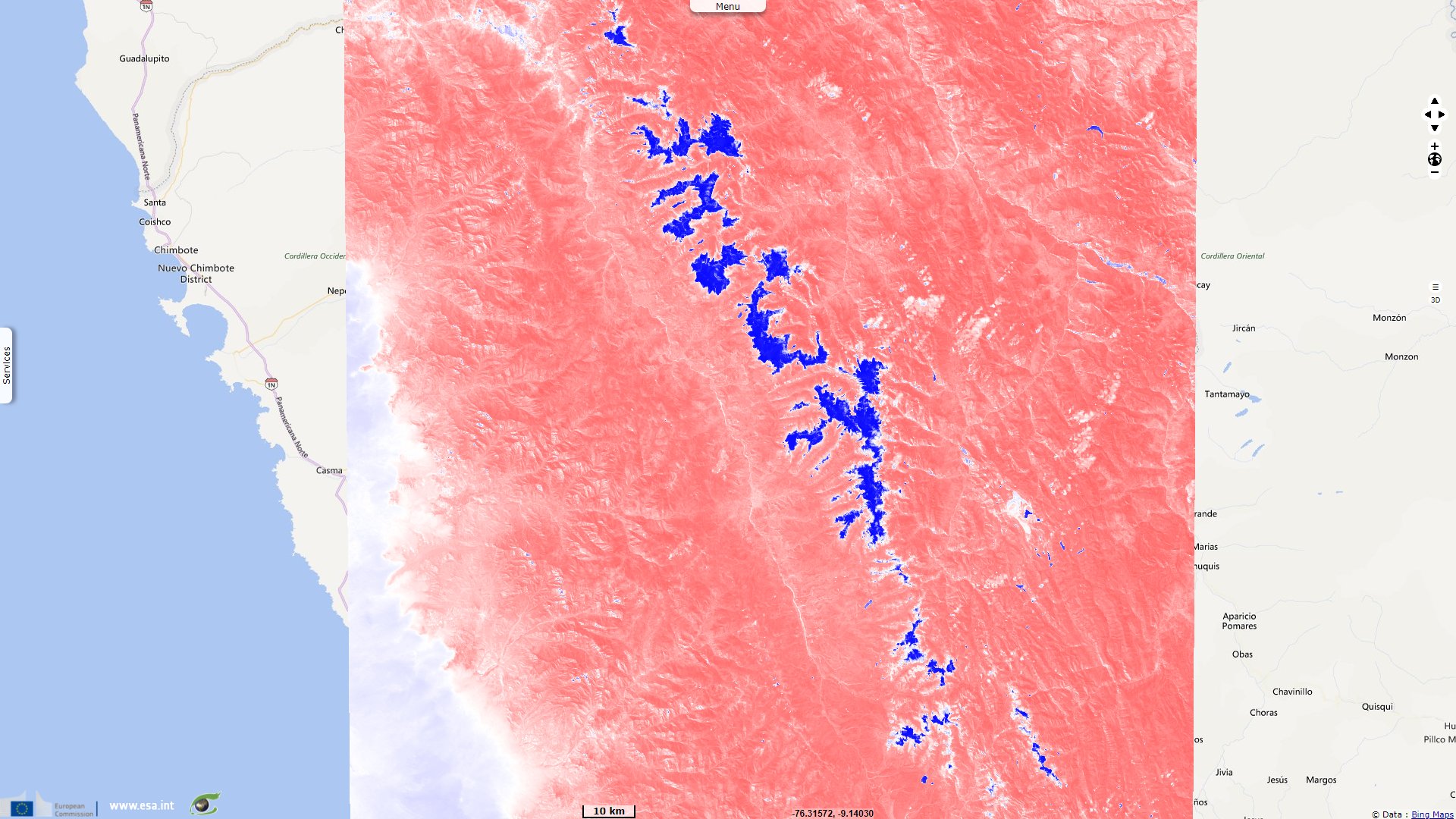 "The entire region has been settled for millennia, as evidenced by the many pre-Columbian manifestations in and around the property. Early inhabitants left remnants of agricultural terraces and corrals, as well as roads, dams and water canals. Moreover, there are noteworthy cave paintings, stone tombs and countless artefacts."
Fig. 5 - Landsat-5 (15.05.1987) & S2 (23.06.2018) - The difference between these indices highlights the glacial retreat (bright red) in three decades.
2D view

"Huascaran is located in the High Andes and includes high plateaus of Puna grasslands, where 6,000 m peaks and glaciers form a globally notable mountainous region, including over 600 glaciers, almost 300 lakes and 41 tributaries of three important rivers: the Santa, Pativilca and Maranon."
Fig. 6 - Landsat-5 (15.05.1987) - View of glaciers Caullaraju (west) and Pastoruri (east) in 1987.
2D view 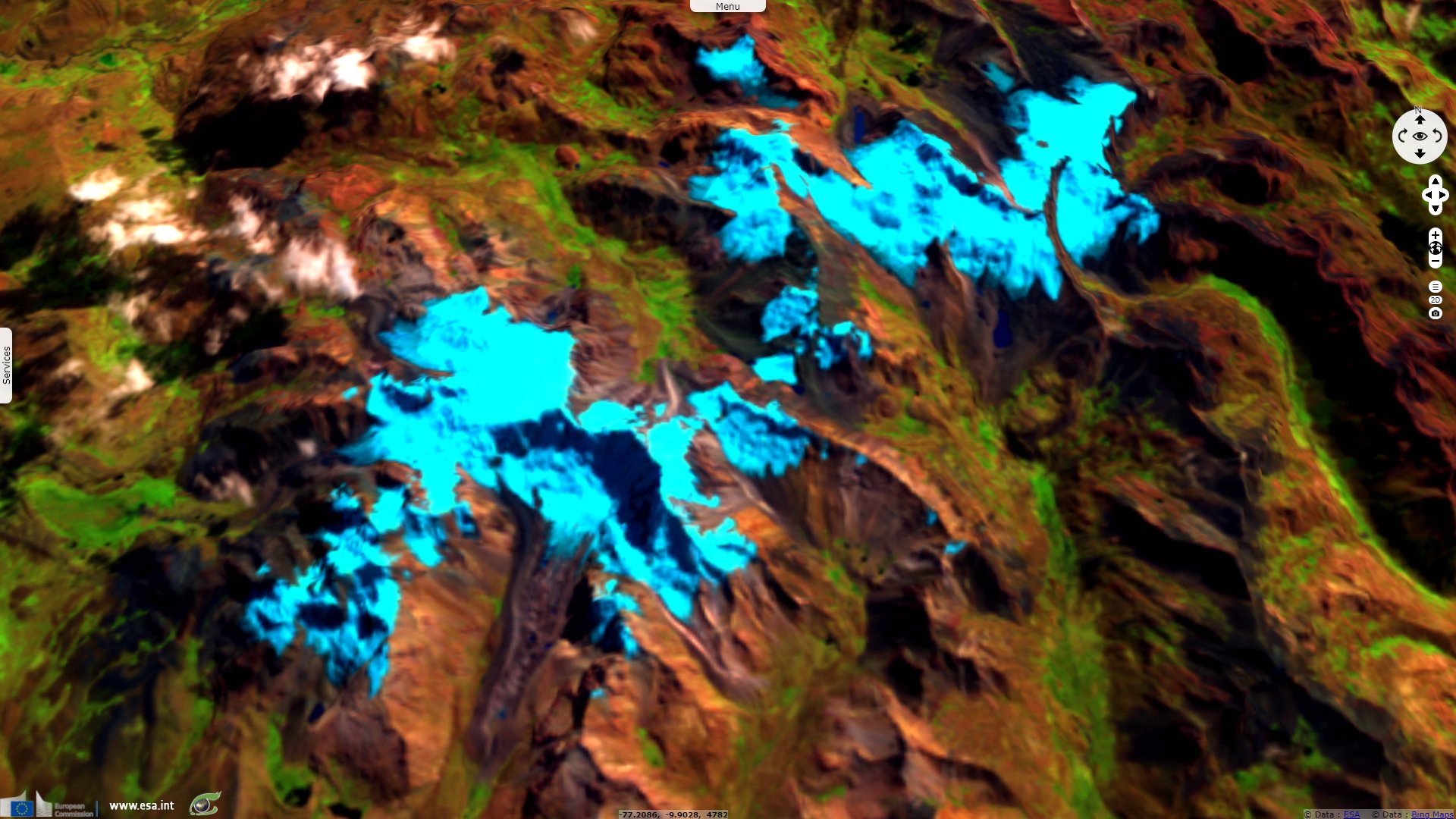 "Underlying the exceptional landscape of Huascaran National Park is a broad spectrum of remarkable ongoing geological features and processes shaping the impressive geomorphology. The area's geological history and structures are very complex, with serrated peaks and the rugged topography originate from the uplifting of Mesozoic sediments, which were severely folded and faulted by complex tectonic activity at the end of the Cretaceous period and subject to volcanism in the Pliocene and Pleistocene epochs. To this day there is strong seismic activity in the area, major earthquakes, such as in 1945, 1962 and 1970 serving as cruel reminders. Glaciation is a major element in the geomorphology and hydrology of the property."
Fig. 7 - S2 (23.06.2018) - In 2018, much of it has decreased, it is now unable to grow back and doomed.
2D view 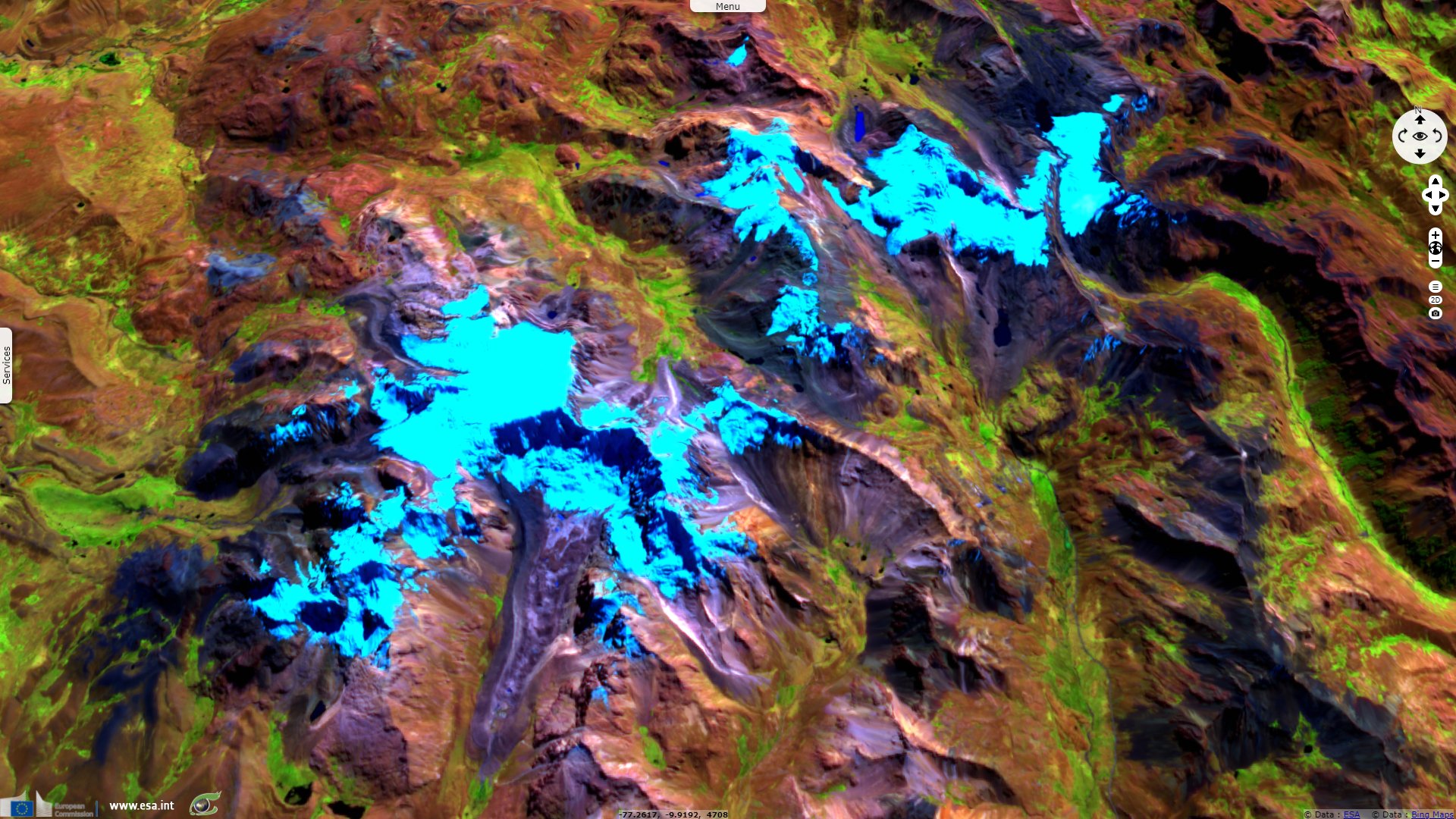 It is estimated that as much a quarter of the volume of glacial ice in the Cordillera may have disappeared since the late 1960s, a process which is likely to further change the visual face of Huascaran National Park. This is a source of worry as highlighted by Adam Emmer in his article Glacier Retreat and Glacial Lake Outburst Floods available on Oxford Research Encyclopedias: "Lake Palcacocha (9°23′52′′ S, 77°22′52′′ W) is situated at the head of the Cojup valley, beneath the southern slopes of the Palcaraju massif (6274 m a.s.l.) and western slopes of the Pucaranra massif (6156 m a.s.l.), Cordillera Blanca, Peru (see Figure 9). Dam failure occurred at 6:45 a.m. on December 13, 1941 (Zapata, 2002)."
Fig. 8 - S2 (23.06.2018) - The city of Huaraz lies downstream Glacier Palcacocha, it was devastated by a landslide-triggered tsunami in 1941.
2D view 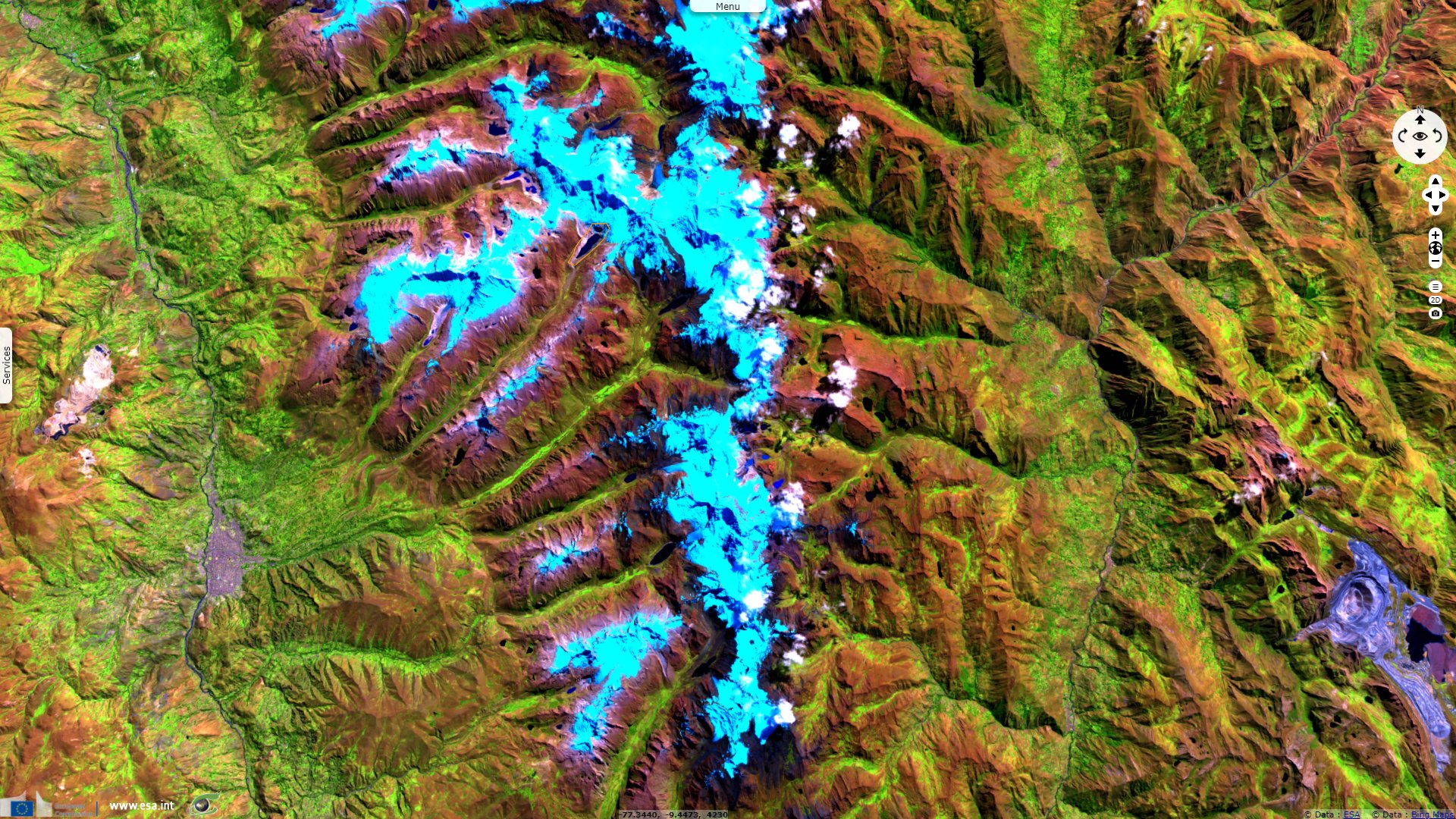 "Oppenheim (1946) mentioned two alternative causes: seepage-induced dam failure, and an ice avalanche into the lake initiating breaching; however, no direct evidence for either of these potential causes was recorded. The pre-failure lake water level elevation was 4610 m a.s.l., which decreased by 47 m during the event (i.e., 47 m breach depth). Material eroded from the dam formed a 300-m wide and 1080-m long fan."
Fig. 9 - Landsat-5 (15.05.1987) - Zoom on the Palcacocha and its small glacial lake in 1987.
2D view 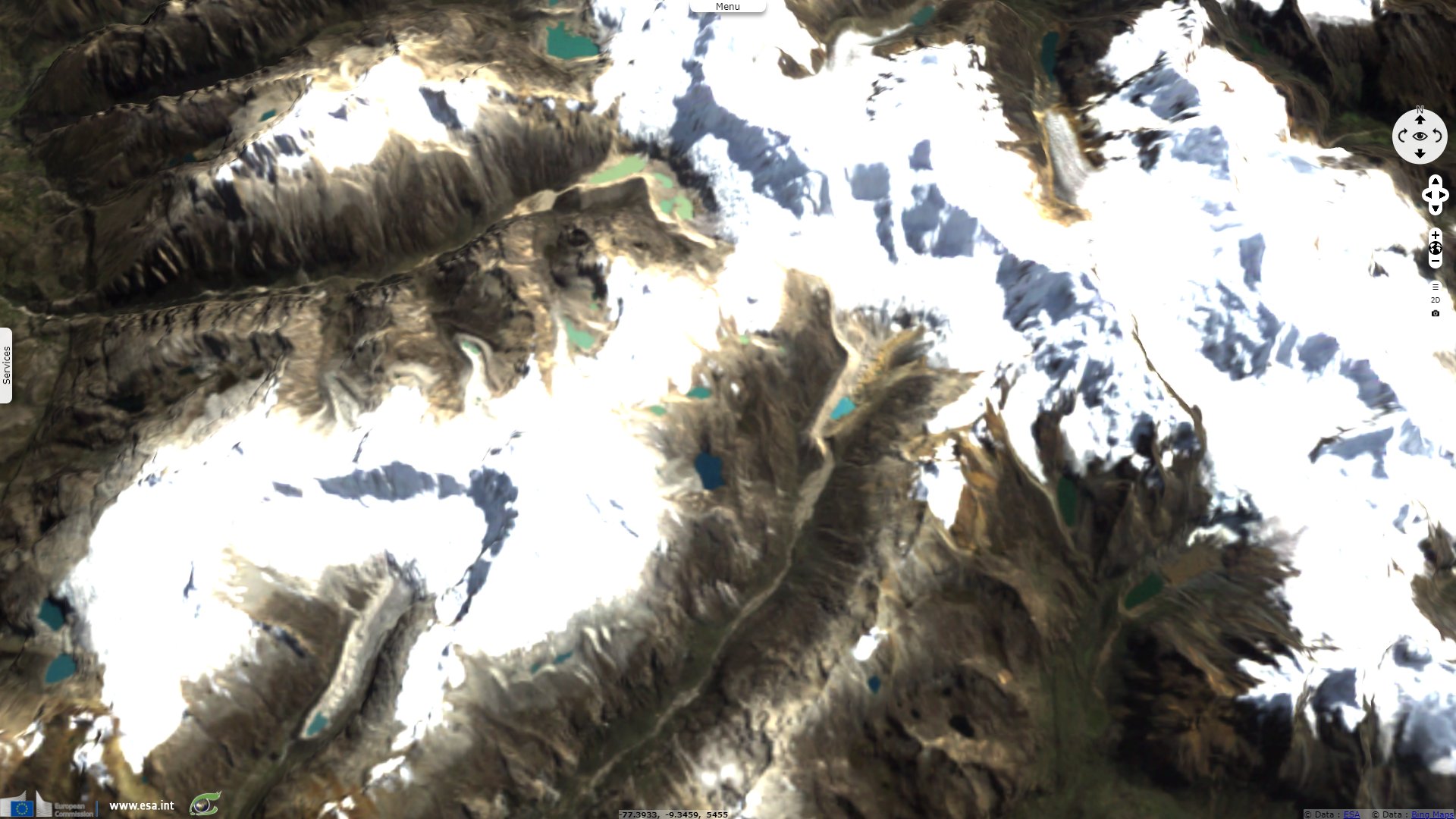 "The volume of released water was estimated to be between 8 millions m3 (Evans & Clague, 1994) and 10 millions m3 (Vilímek et al., 2005). The outburst flood following the failure of the Lake Palcacocha dam subsequently caused failure of the dam on landslide-dammed Lake Yircacocha situated in the valley 8.2 km downstream, increasing the overall flood volume by approximately 2.0 to 3.0 millions m3."
Fig. 10 - S2 (23.06.2018) - 31 years later, Palcacocha lake has grown bigger than ever due to the glacier melting.
2D view 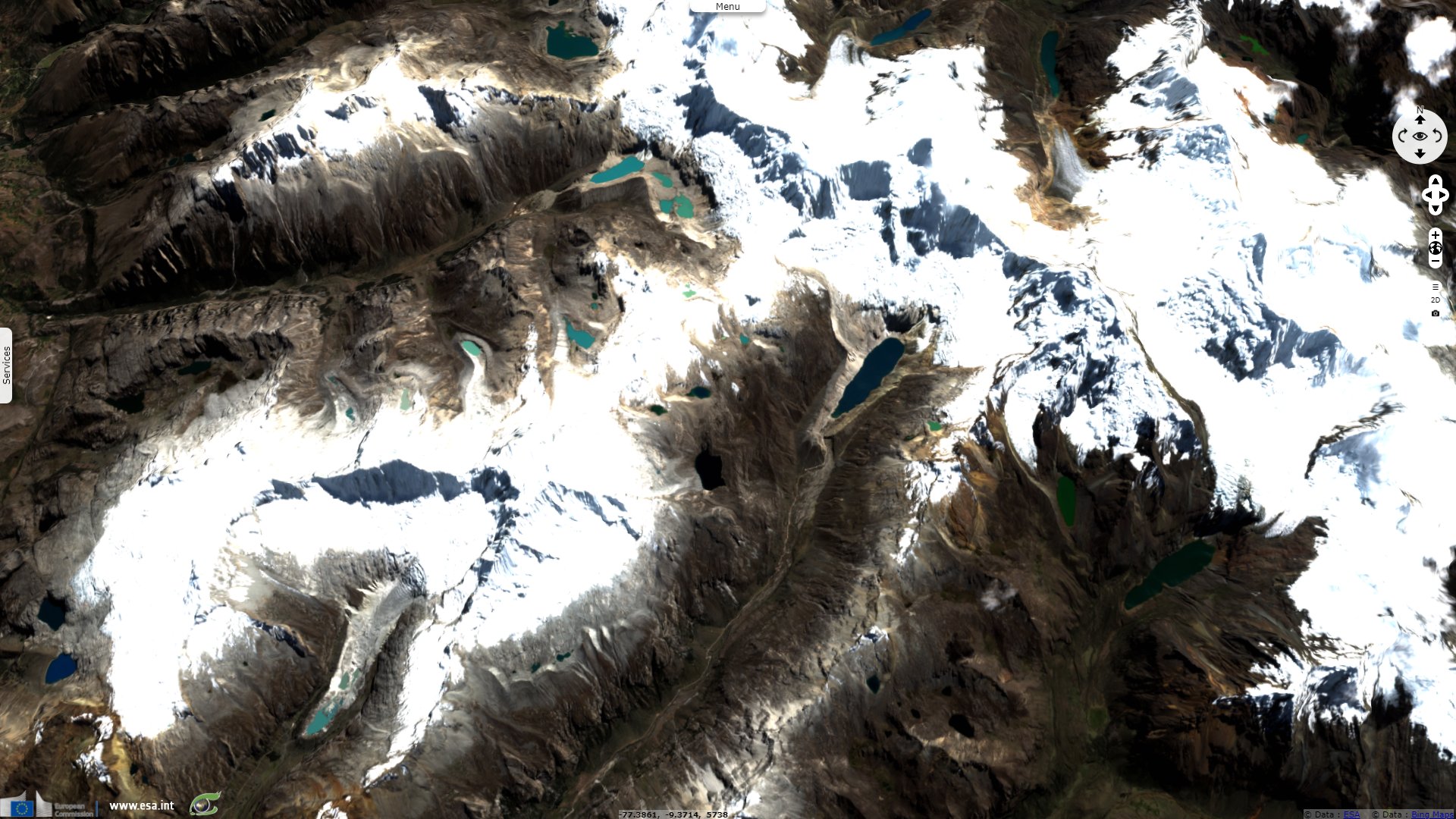 "The resulting flood affected the valley floor of Cojup stream over a width of up to 200 m (topographically limited in the upper parts) and up to 500 m in the lower part (alluvial fan on the confluence with Santa River) and transported an overall volume of 4 millions m3 of material (Zapata, 2002). The event destroyed almost one third of the city of Huaráz (23 km away, elevation difference 1550 m, mean slope of the valley 3.9°), claimed thousands of fatalities (Oppenheim, 1946), and is considered to be one of the worst natural dam failures ever documented."
Fig. 11 - Landsat-5 (15.05.1987) & S2 (23.06.2018) - Showing in red, the glacial retreat has fed the lake that endangers the valley below.
2D view 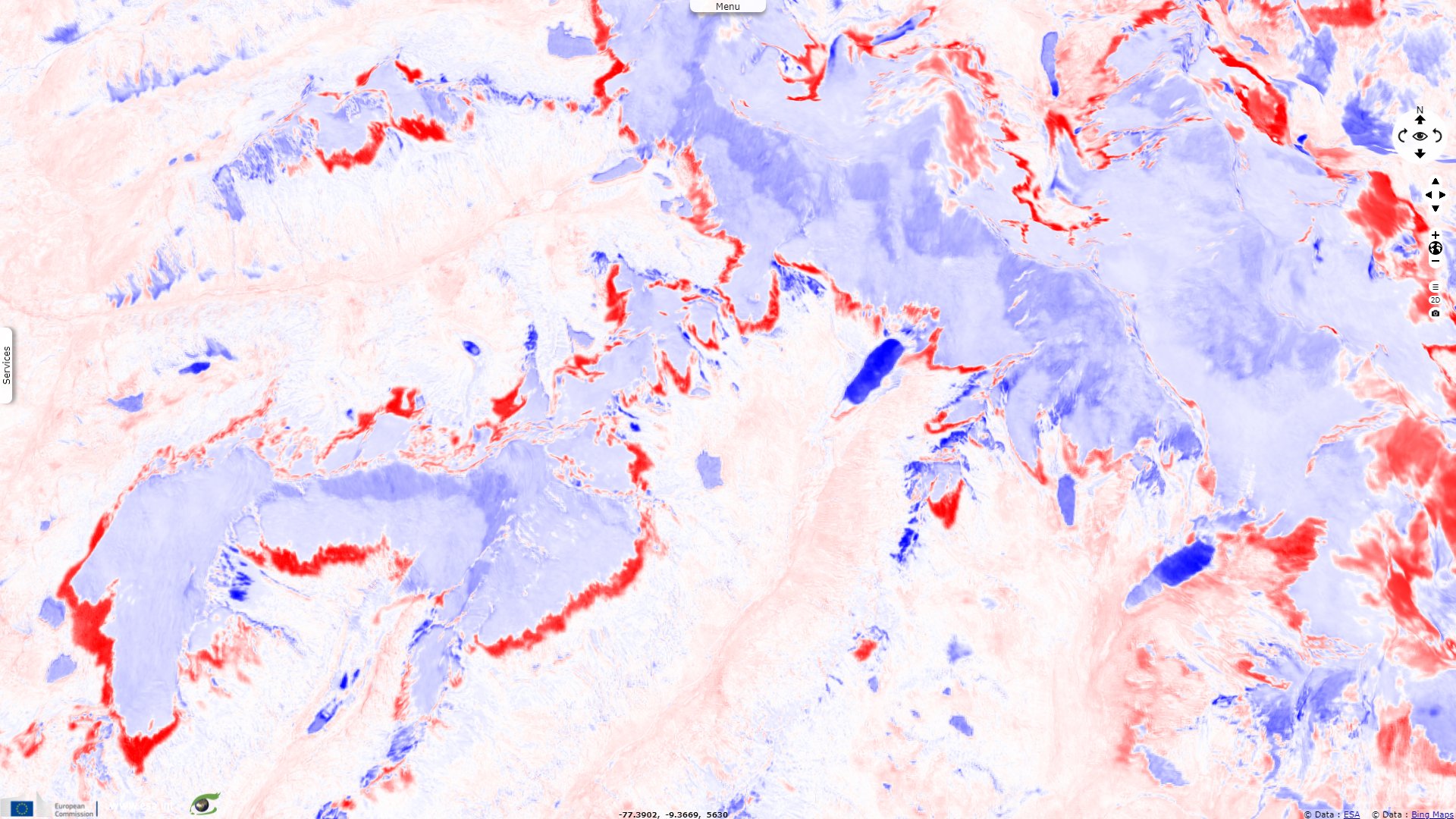 "After the moraine dam failure, Lake Palcacocha was replaced by a small (about 0.5 million m3) remnant lake dammed by a basal moraine. This lake has ubdergone rapid growth due to glacier retreat. Its current volume is greater than it had been before 1941 (UGRH, 2015), putting the lake’s safety into question (see Somos-Valenzuela et al., 2016)."
The views expressed herein can in no way be taken to reflect the official opinion of the European Space Agency or the European Union.
Contains modified Copernicus Sentinel data 2022, processed by VisioTerra.