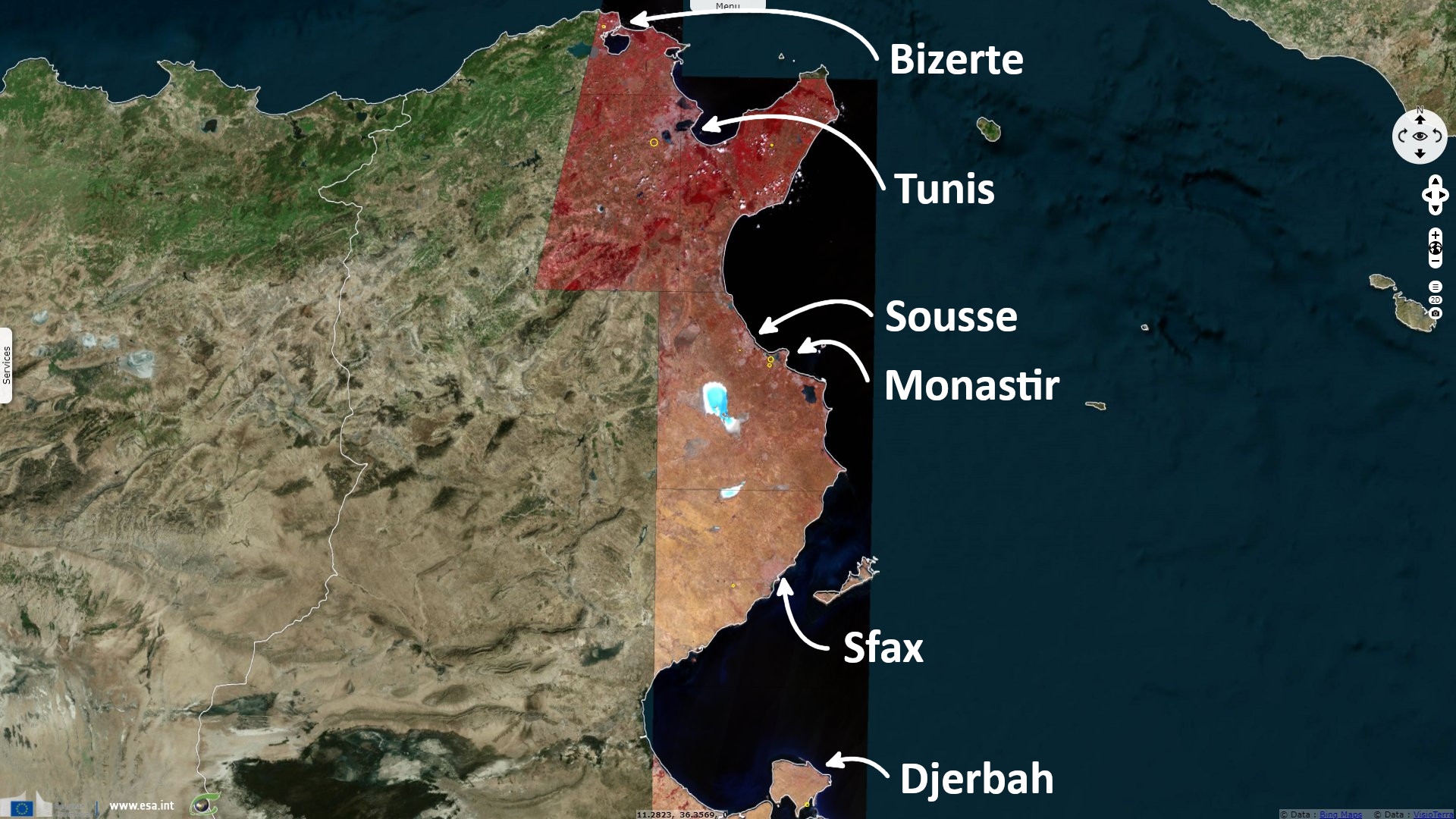 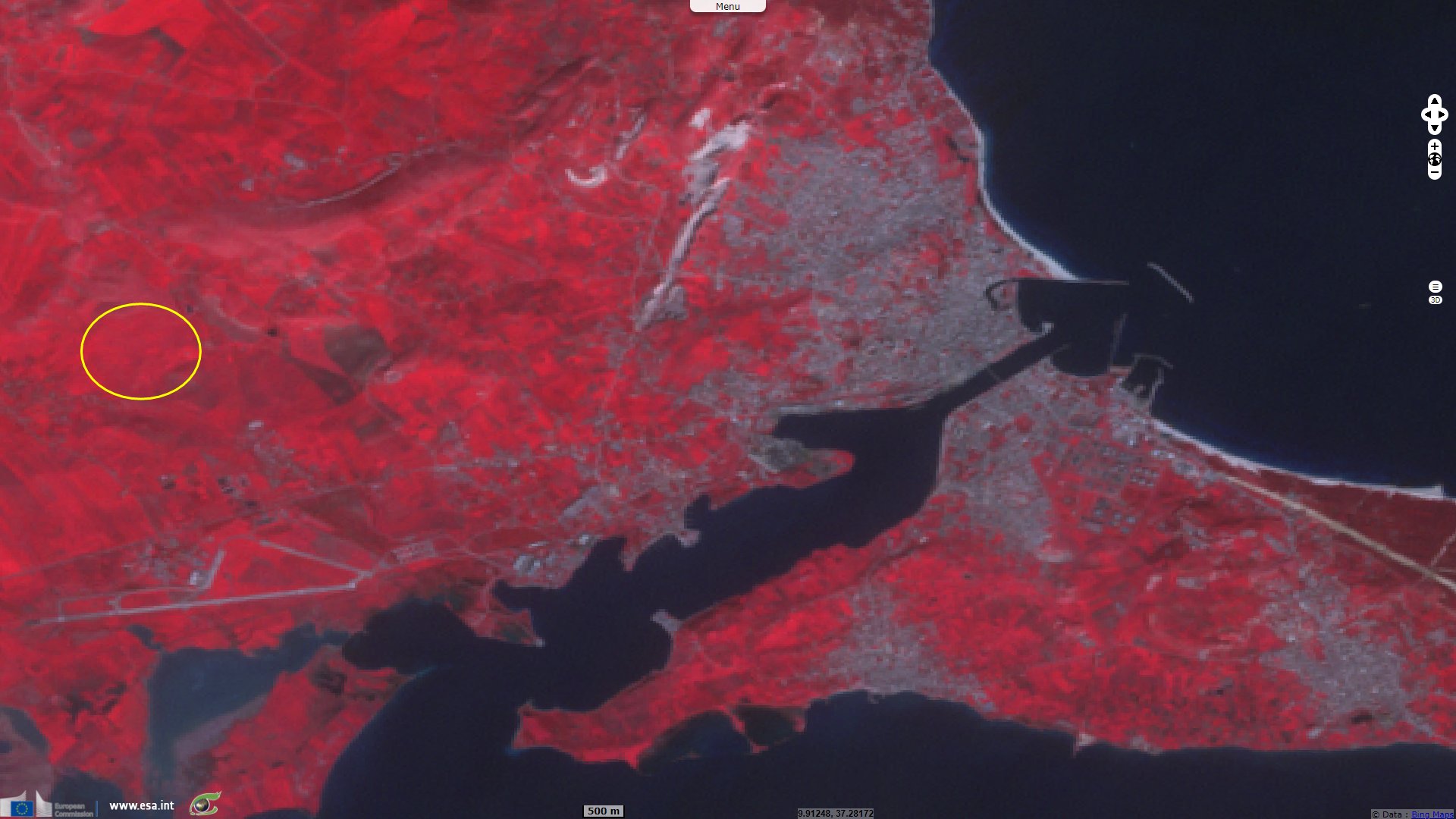 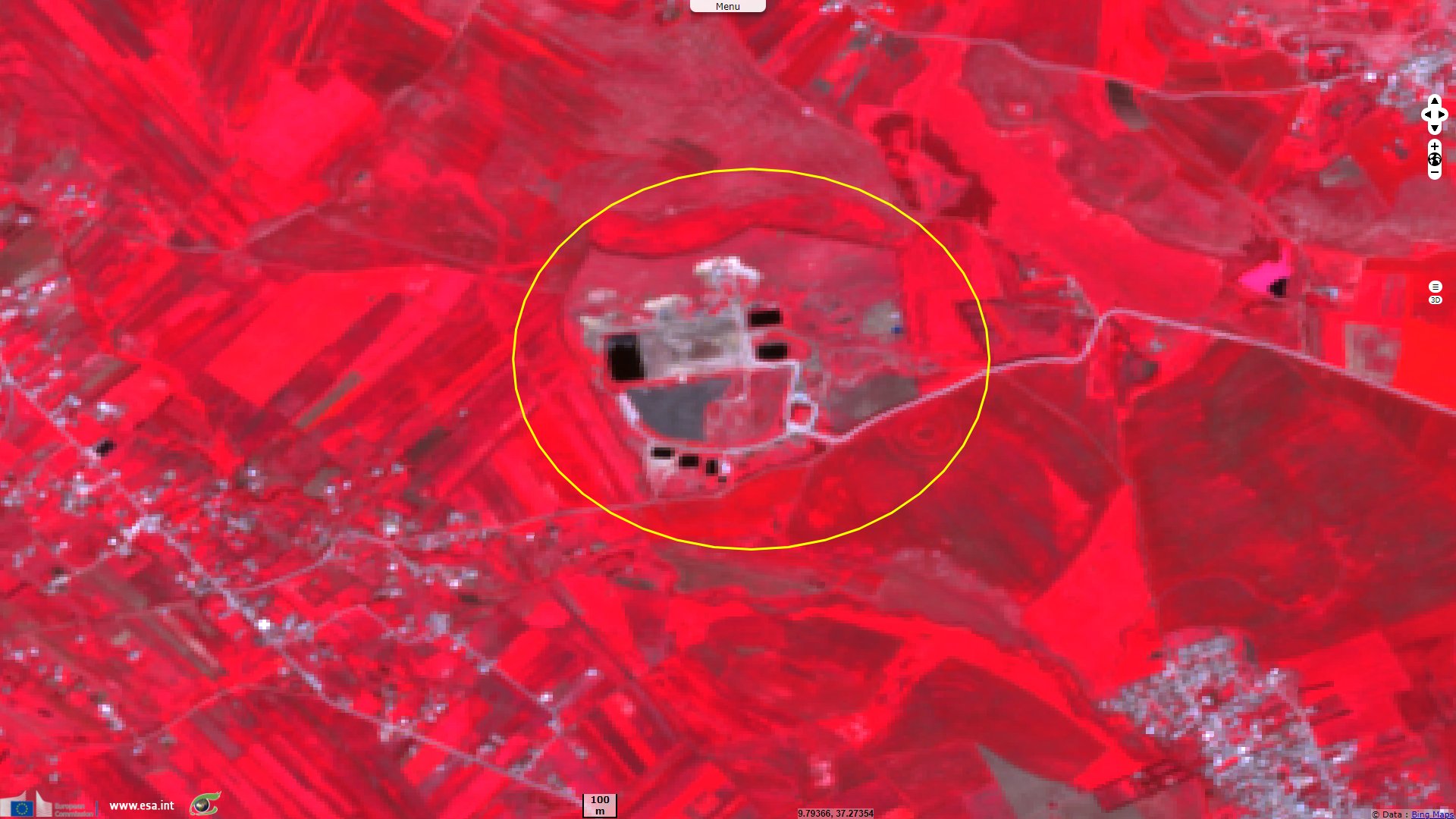 Simon Speakman Cordall wrote an article for The Guardian related to dumpsite-related pollutions in Tunisia: "Waste dumped at landfill sites represents a growing threat to poor communities in Tunisia, polluting air and water supplies. Litter, especially plastic bags, has come to dominate the country's famously dramatic landscape. The problem is felt by all citizens, but none experience it more acutely than those living next to the straining landfill sites."
Fig. 4 - Landsat-7 (08.02.2001) - View of the region of Tunis.
2D view 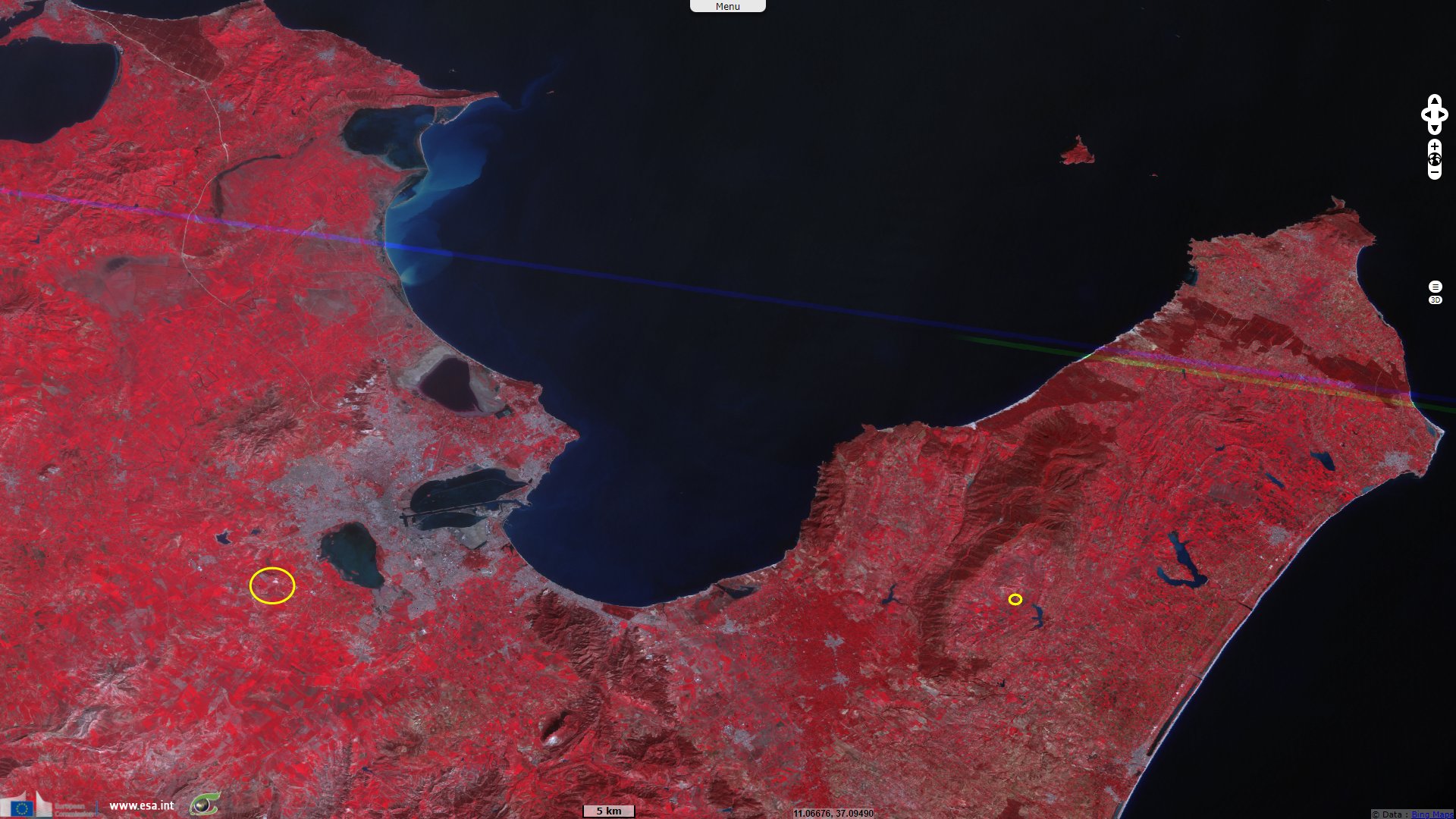 "The impact of landfills on such areas is difficult to overstate. In 2011, after the Jasmine revolution, it was the landfill sites at Djerba, Enkhila (near Nabeul), Oued Laya (near Sousse), Agareb (near Sfax), and the country's only hazardous waste-treatment plant, at Jradou, that bore the brunt of local residents' fury. All were closed, most of them temporarily, as a result of violence. Jradou remains shut, and it is unclear where its waste is being treated. Plans to reopen the Djerba site have triggered more violence."
Fig. 5 - S2 (25.04.2021) - Al 'Attar dumpsite in Jbel Borj Chakir lies at south-west of Tunis.
2D view 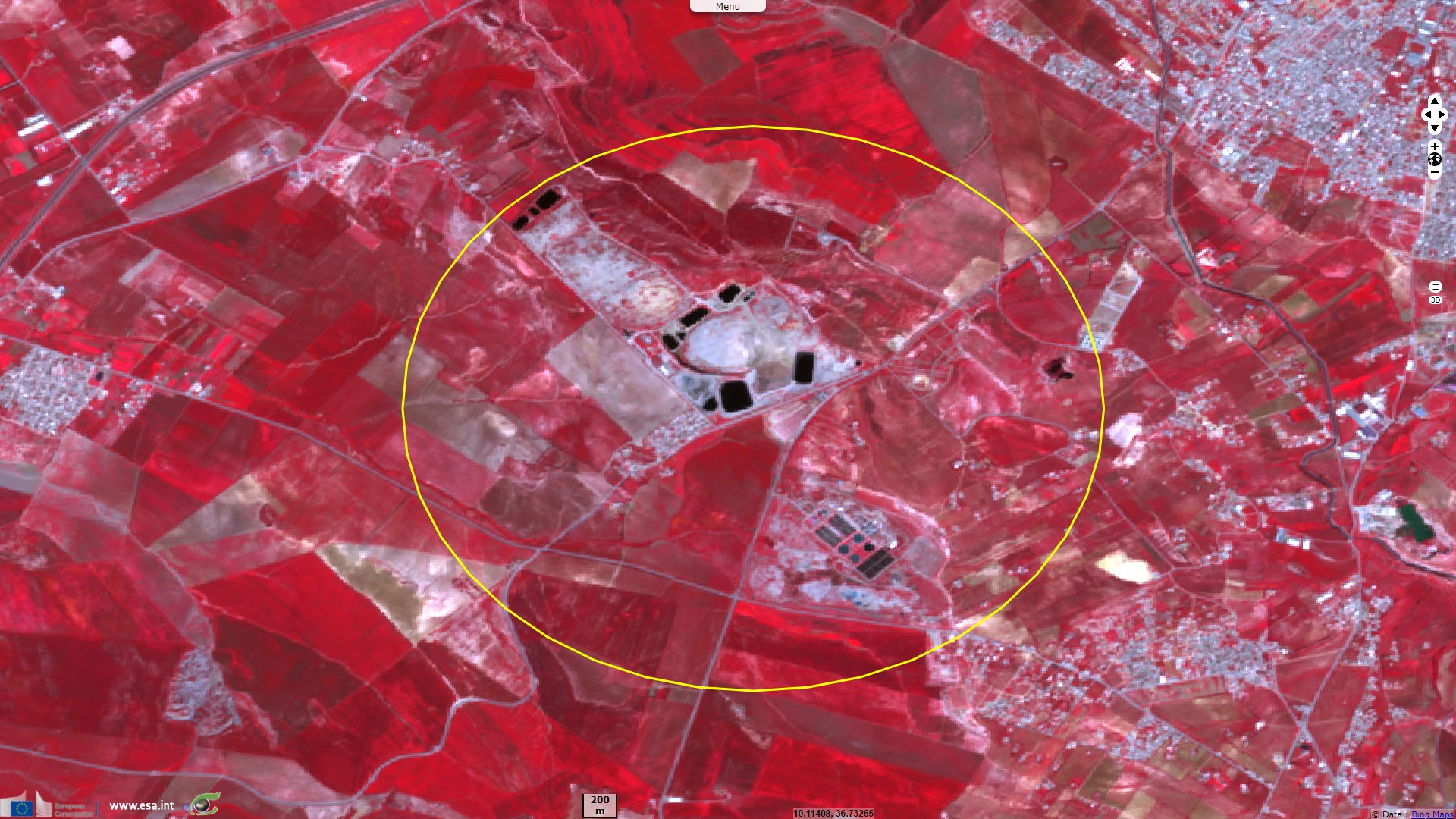 "'When you build a landfill, you build it for a specific period,' says Morched Garbouj, an environmental engineer and president of the SOS BIAA environmental group. 'Here at Jbel Borj Chakir, that period ended in 2013. At that point, it should either have been closed or, at the least, operating at around 10% to 20% capacity.'"
Fig. 6 - S2 (25.04.2021) - Zoom on Enkhila dumpsite in Nabeul, further south-east of Tunis.
2D view 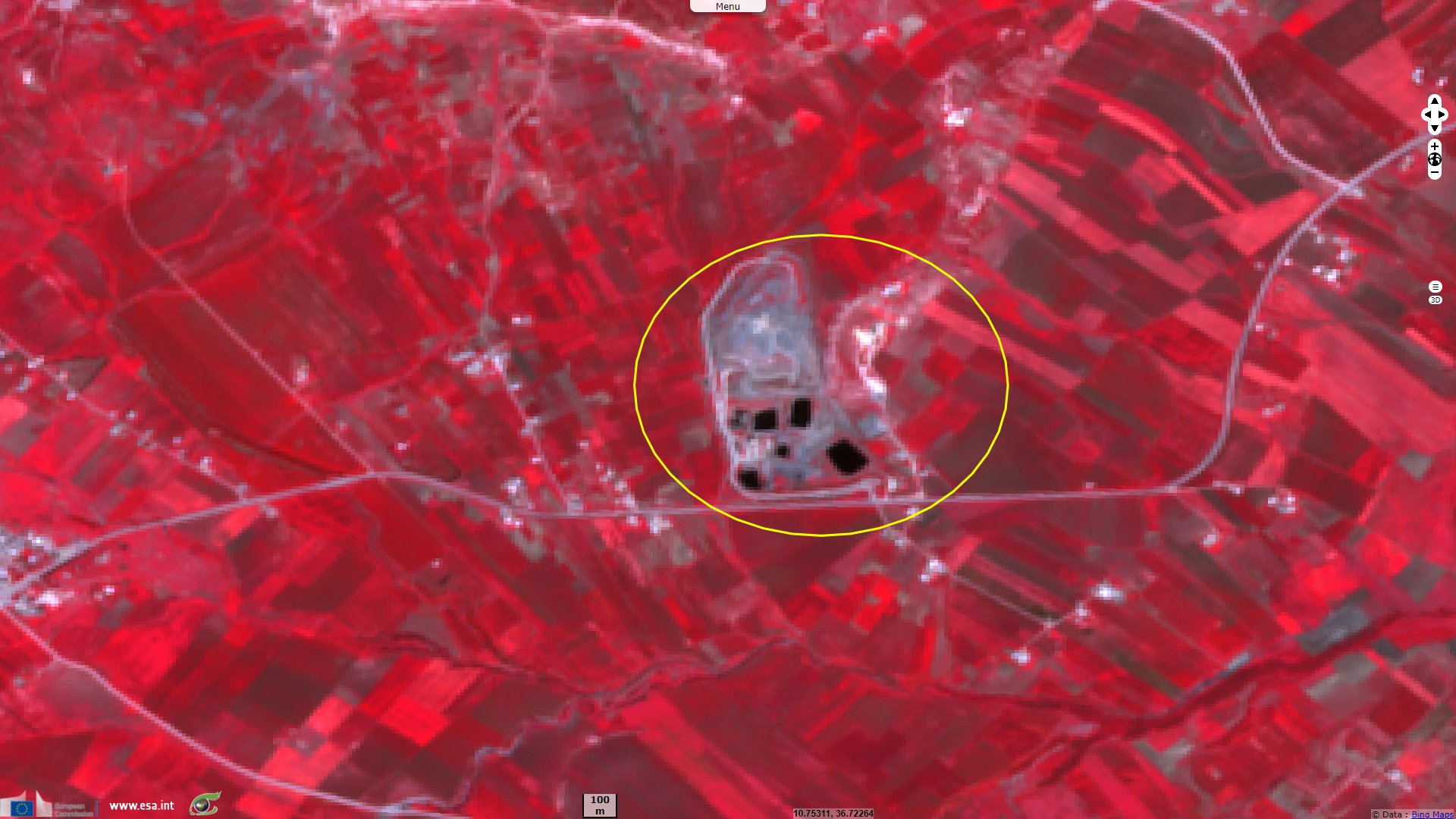 "According to Darghouth, no decision has been taken on the long-term future of Jbel Borj Chakir. 'We're taking delivery of around 2000 tonnes of waste every day. That has to go somewhere … We're just dealing with everything on a day-to-day basis while we work to implement a larger strategy.'"
Fig. 7 - Landsat-7 (08.02.2001) - Three sites have been mentioned in articles in the region of Sousse and Monastir.
2D view 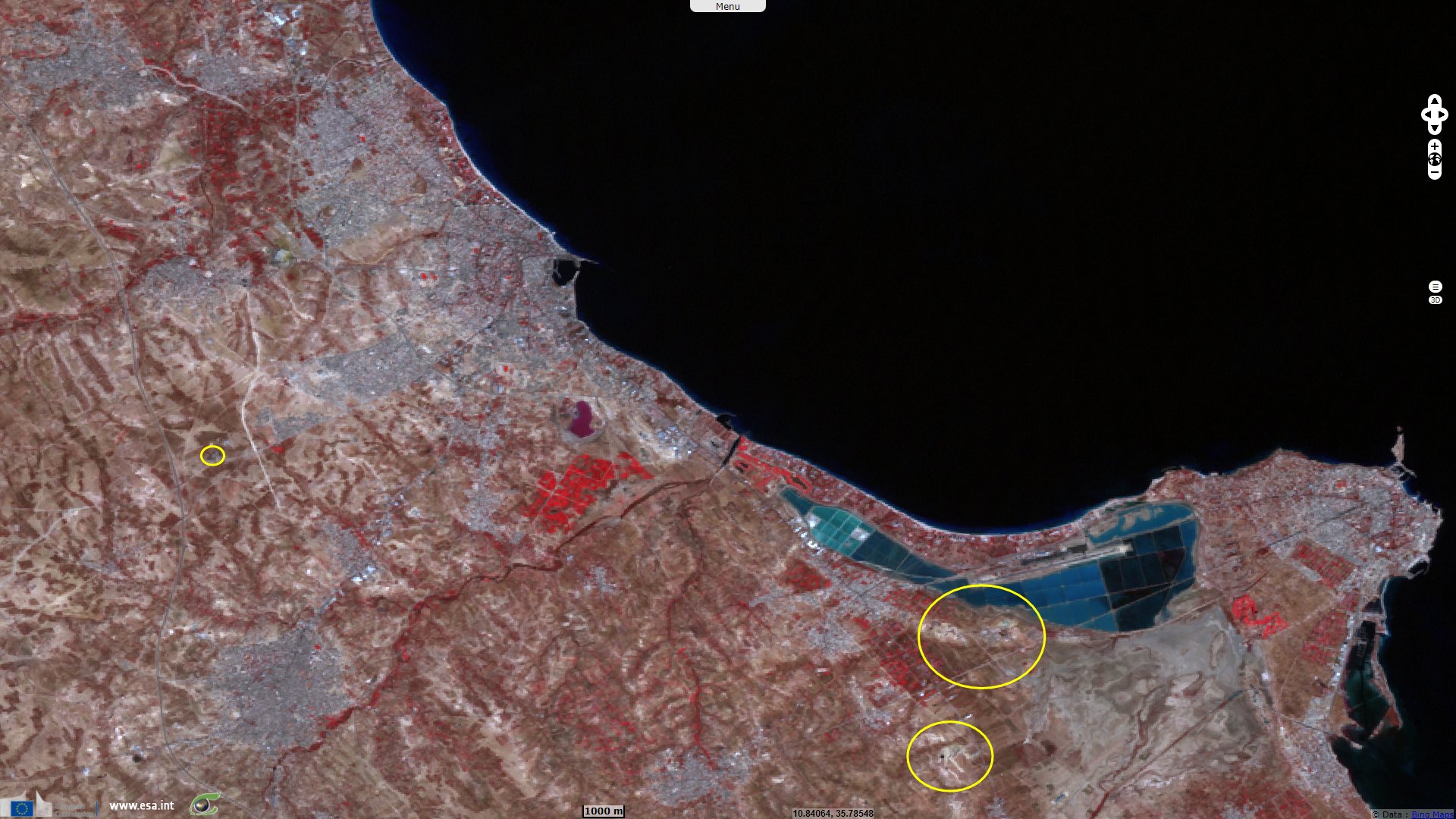 "'One of the problems here is that we don't know what kind of waste we're dealing with'. 'Elsewhere, waste is separated, here it all gets dumped together – chemical, industrial, household and medical', says Garbouj Residents and those who make their living scavenging the dump have reported finding blood bags and foetuses in the refuse at Jbel Borj Chakir, a claim denied by Agence Nationale de Gestion des Déchets, which manages waste on behalf of the environment ministry."
Fig. 8 - S2 (20.05.2021) - Zoom on Oued Laya dumpsite, west of Sousse, the northernmost and the smallest of the three sites.
2D view 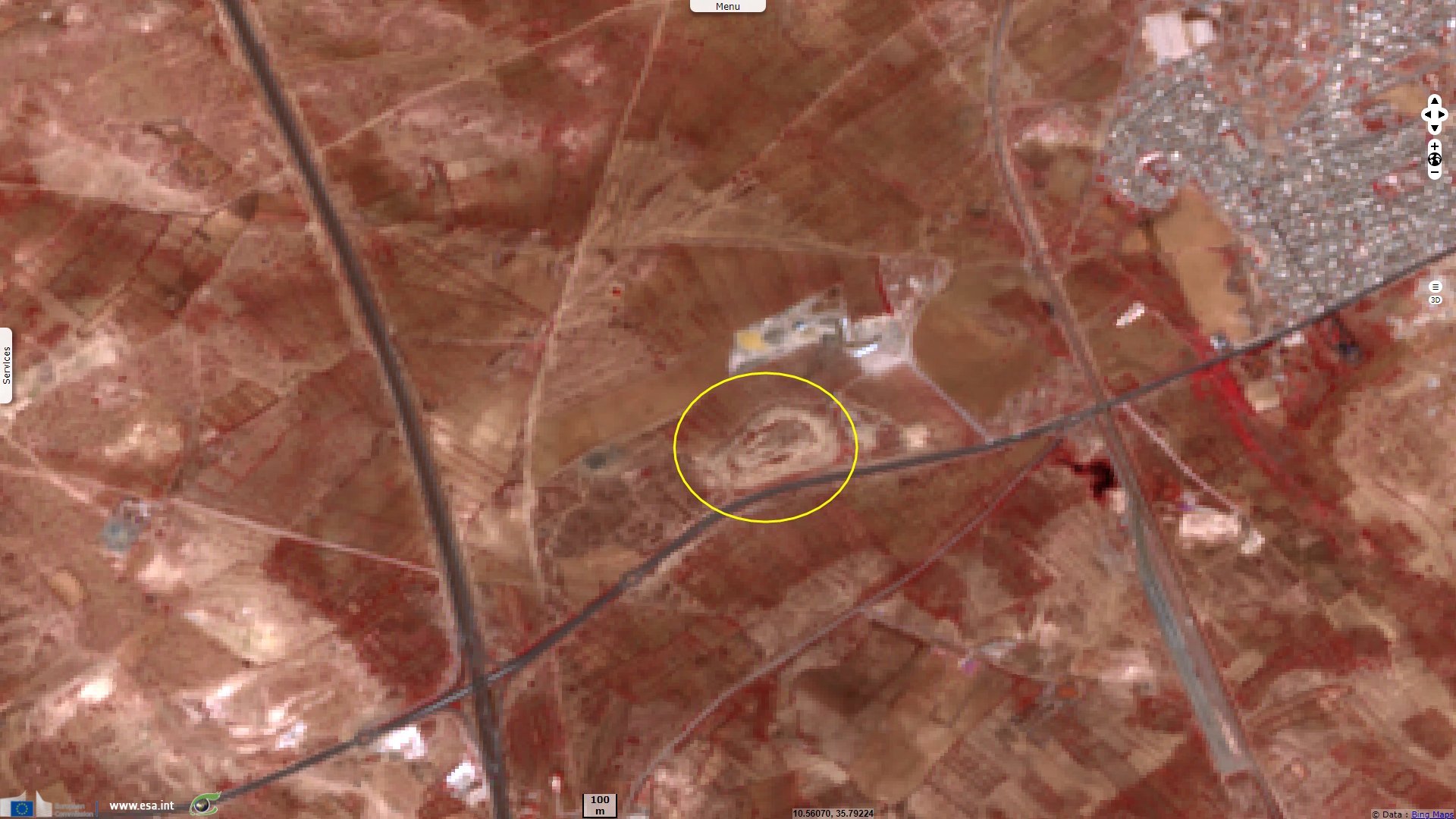 "'One of the problems with all the different types of waste is the leachate it produces [the liquid produced at the base by the compressed refuse]'. 'Leachate is highly toxic, so there are strict controls about how it should be treated and disposed of. However, because no one knows what's in it, no one knows how it should be treated', adds Garbouj."
Fig. 9 - S2 (20.05.2021) - Zoom on El Gazzah (north) & Menzel Harb (south) dumpsites next to the airport
2D view 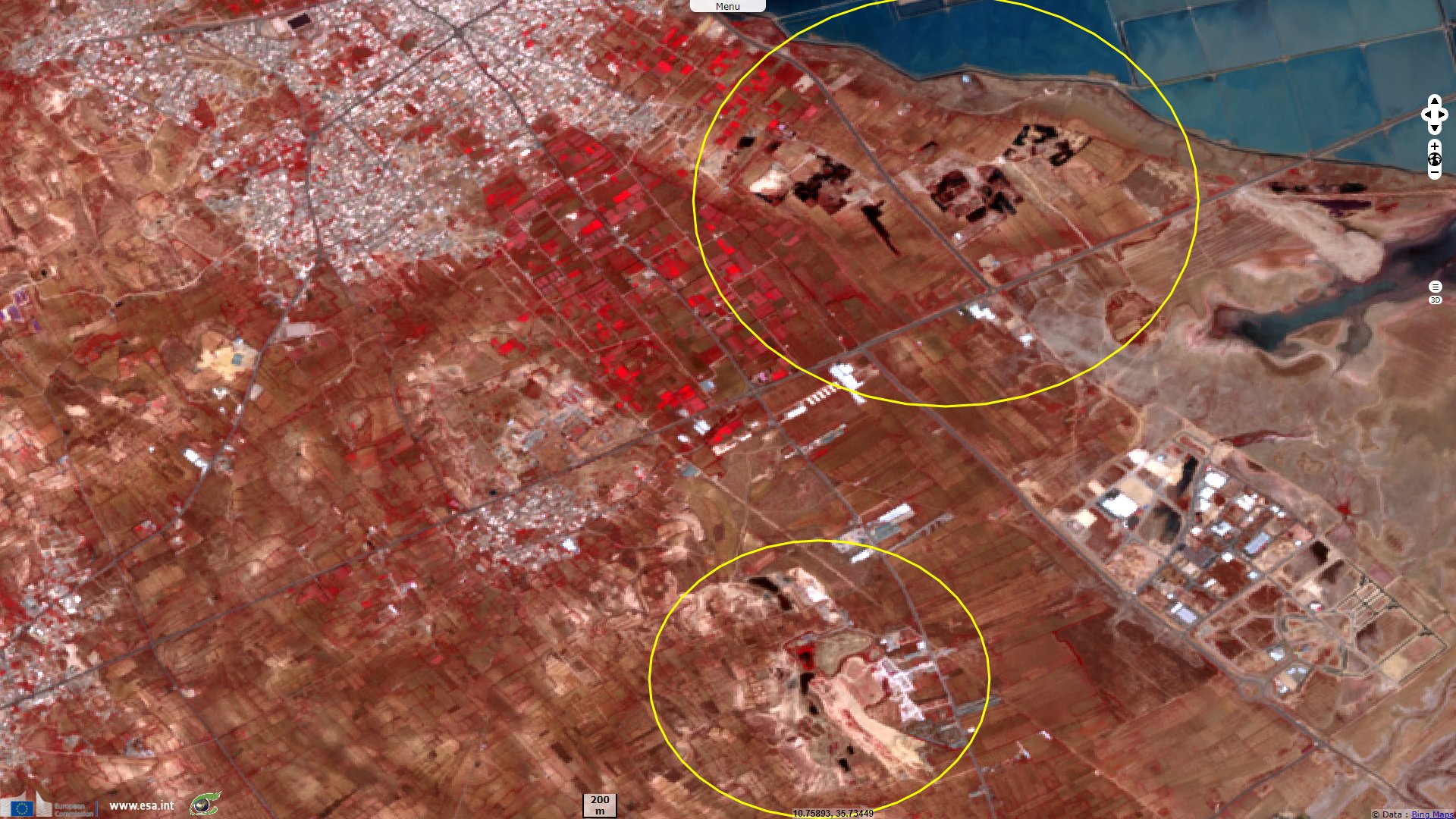 "According to Desta Mebratu, deputy director of the UN Environment Programme's regional office for Africa: 'Disposal in sanitary landfills is the last option that should be considered […] Tunisia is one of the first African countries that established a national programme on waste minimisation and cleaner production. This programme has led to reduction of generation of industrial waste and reduction of pollution.'", concludes the article of Simon Speakman Cordall.
Fig. 10 - Landsat-7 (08.02.2001) - View of Sfax, further south.
2D view 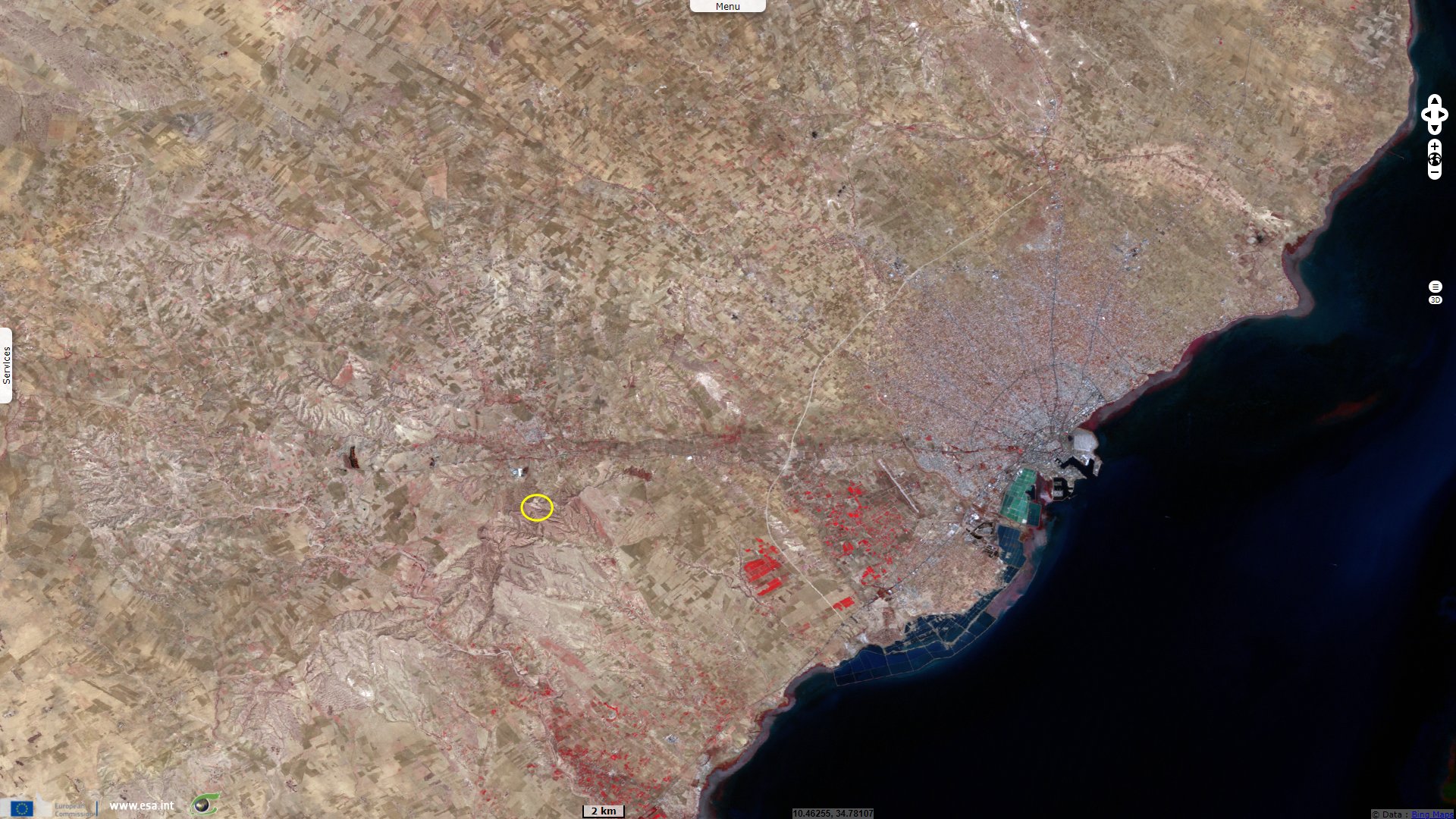 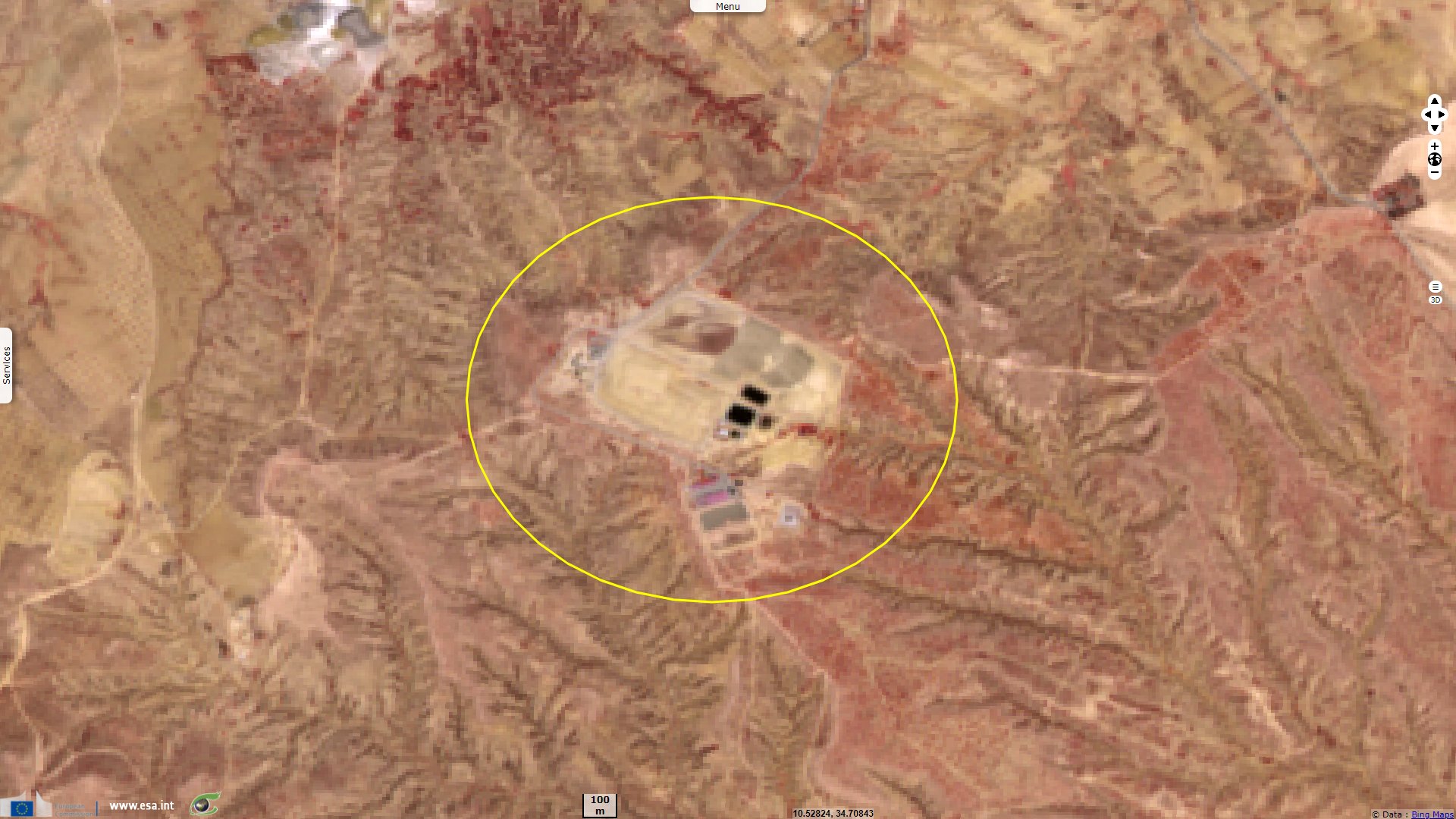 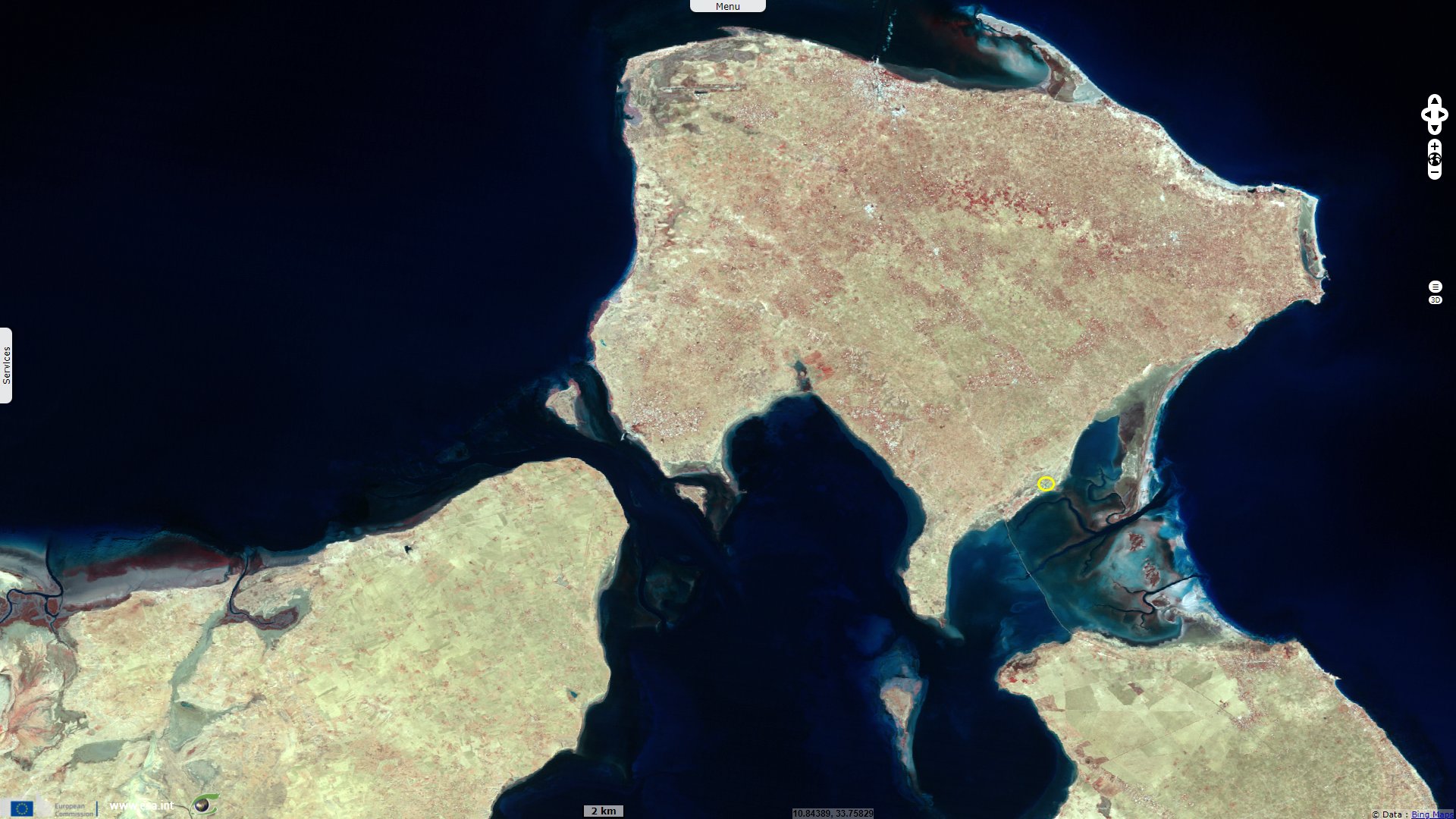 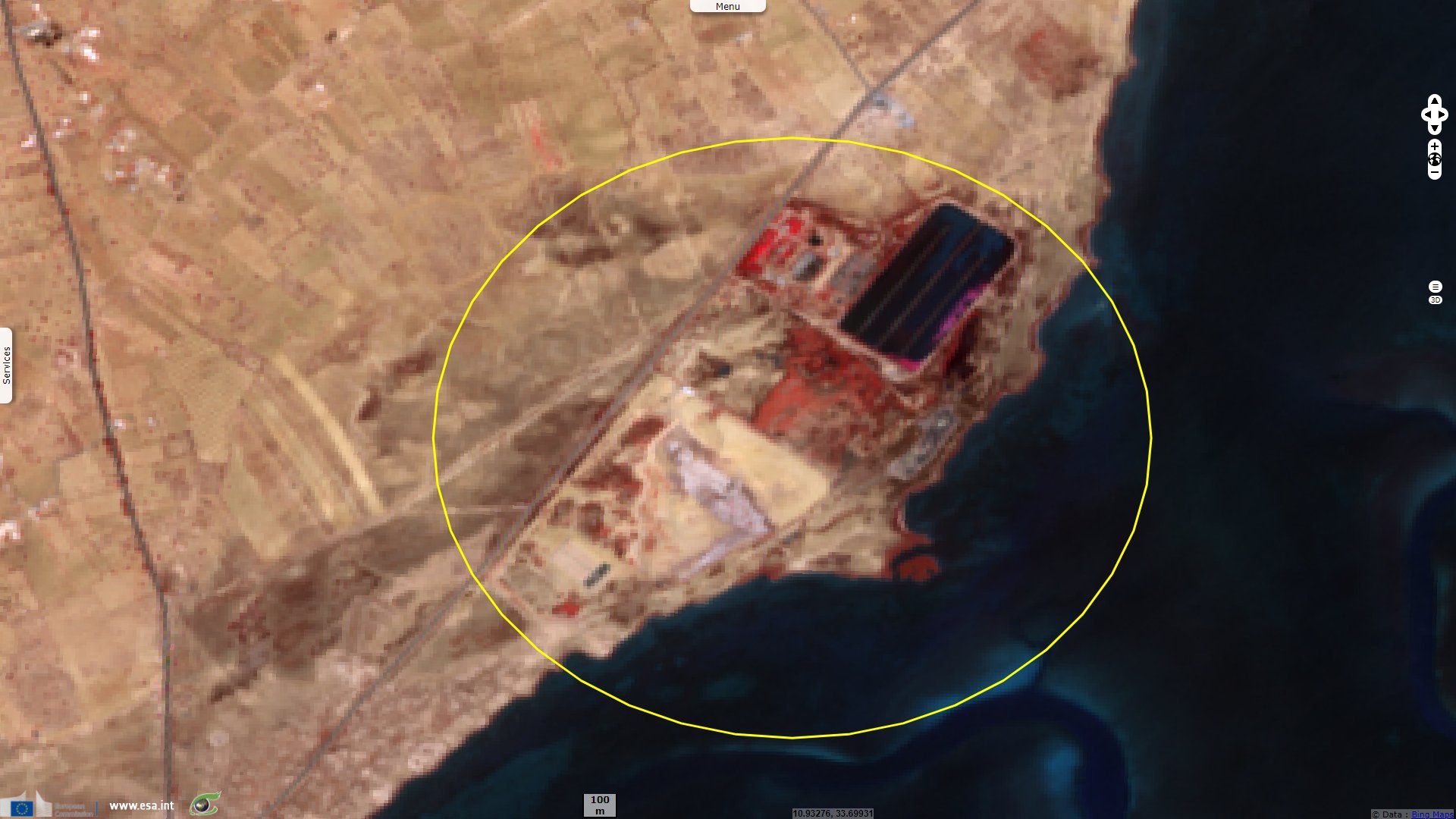