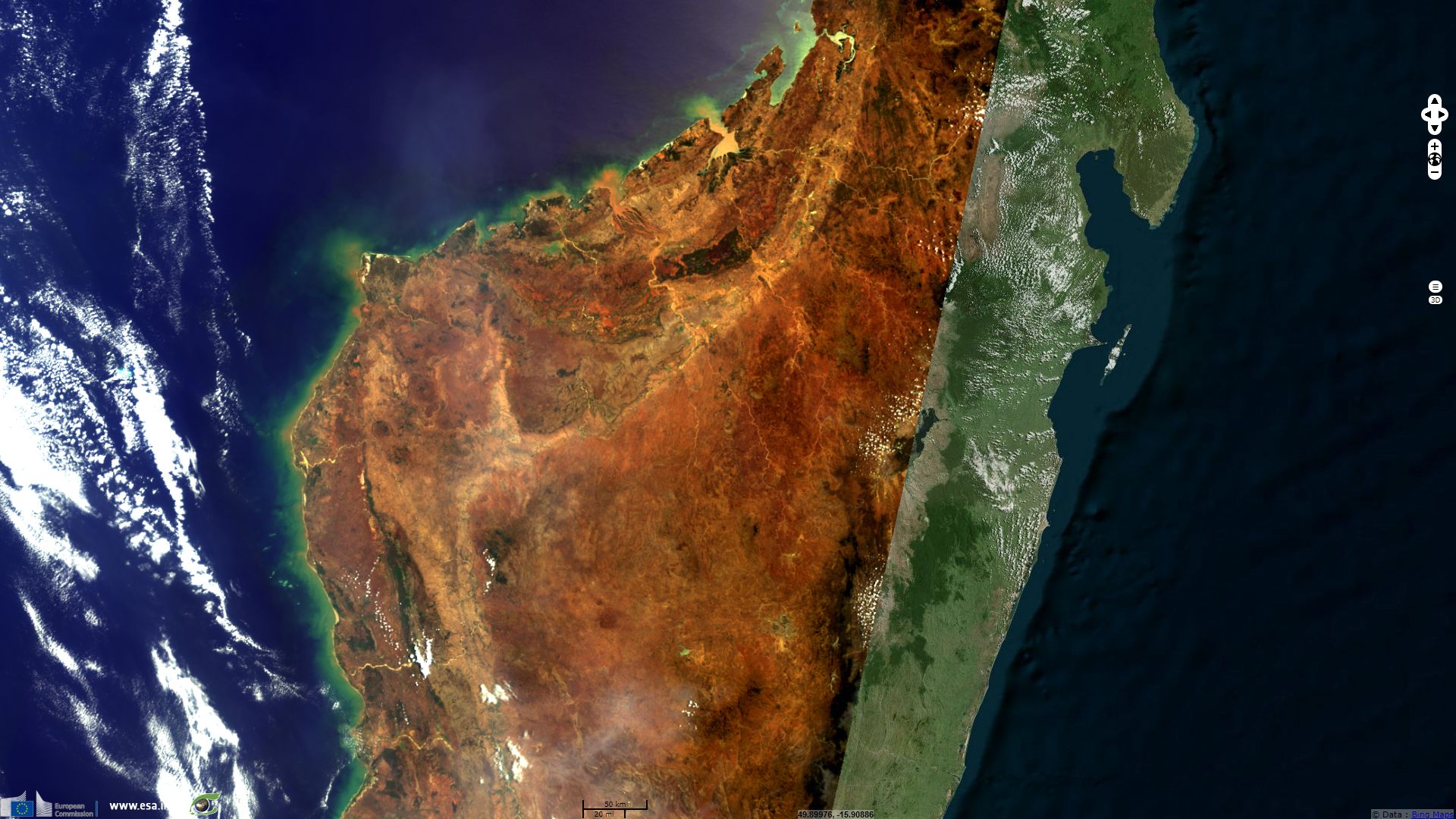 In two Sentinel of the day stories released previously, World water day - Colour changing octopus in Bombetoka Bay, Madagascar and Water colour in north-west Madagascar, we chose to focus on the beautiful and varied water colour found in Madagascar lakes and rivers. The present Event sheet aims to explain the source of this colour and explain how natural resources exploitation and agricultural practice in Madagascar lead to a progressive desertification. Regarding deforestation in Madagascar, Adrian Pitches wrote for BBC: "The island has already lost at least 80% of its original forest cover, with over half this loss in the last 100 years." The World Bank detailed in a previous report: "It is estimated that Madagascar lost about 12 million ha of forest between 1960 and 2000, effectively reducing forest cover by 50% in just 40 years. The most severe losses took place in the 1970s and early 1980s during the height of the socialist revolution when the practice of slash-and-bum, locally known as tavy, was actively encouraged in order to produce more rice to feed the growing urban population without need for investment in the declining irrigation infrastructure. Following the launch of the National Environment Action Plan in the late 1980s, deforestation rates have since declined from over 4000 km²/year in 1975-1985 to around 1000-2000 km²/year during the 1990s." wildmadagascar.org gives more recent values: "Each year as much as a third of the country burns and 1% of its remaining forests are leveled." 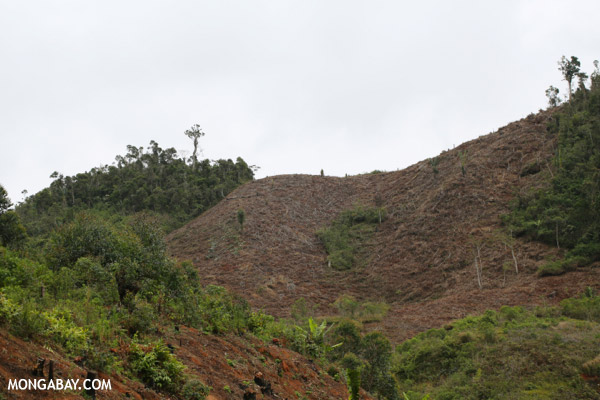 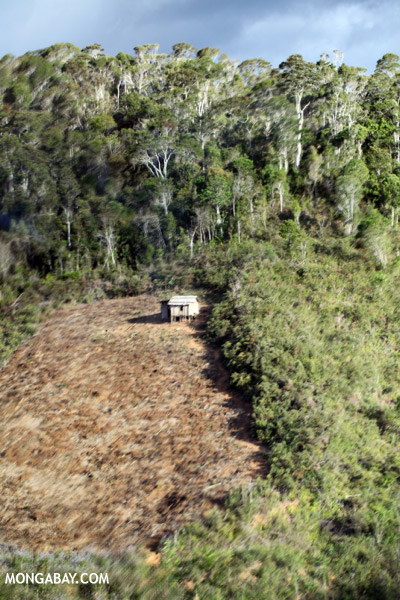 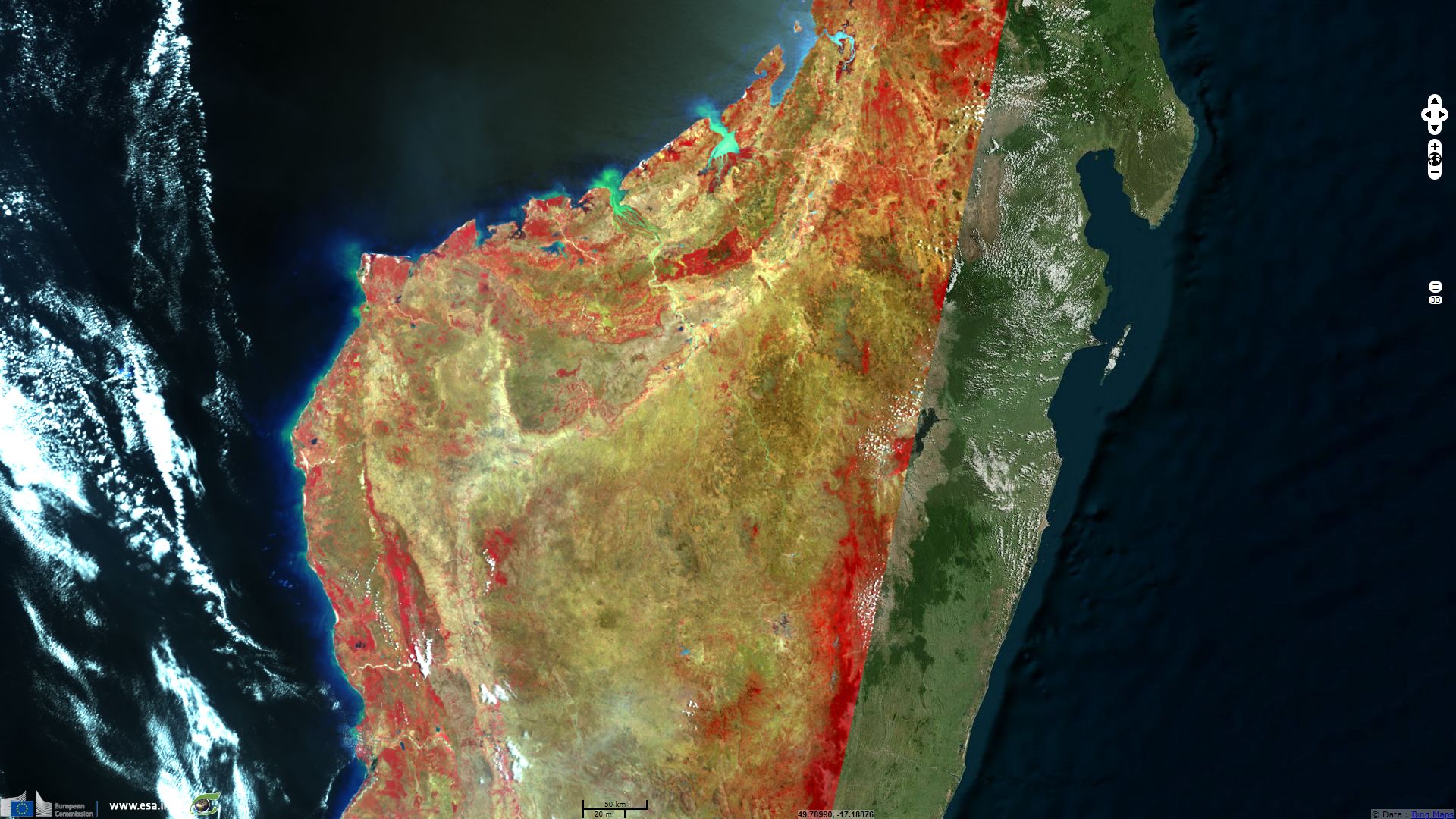 One recent reason for this is precious wood logging, intended for exportation. It remains significant even now it has been banned. wildmadagascar.org specifies: "Logging for timber is especially a problem in the rainforests of eastern Madagascar, particularly on the Masoala peninsula. The high value for Malagasy hardwoods (mostly ebony and rosewood which may fetch $2,000 a ton in international markets) makes illegal logging a significant problem in some protected areas.
Fig. 3 - S2 (18.02.2018) - 4,3,2 natural colour - Canyons & cliffs on the west side of Mahavavy watercourse.
2D view 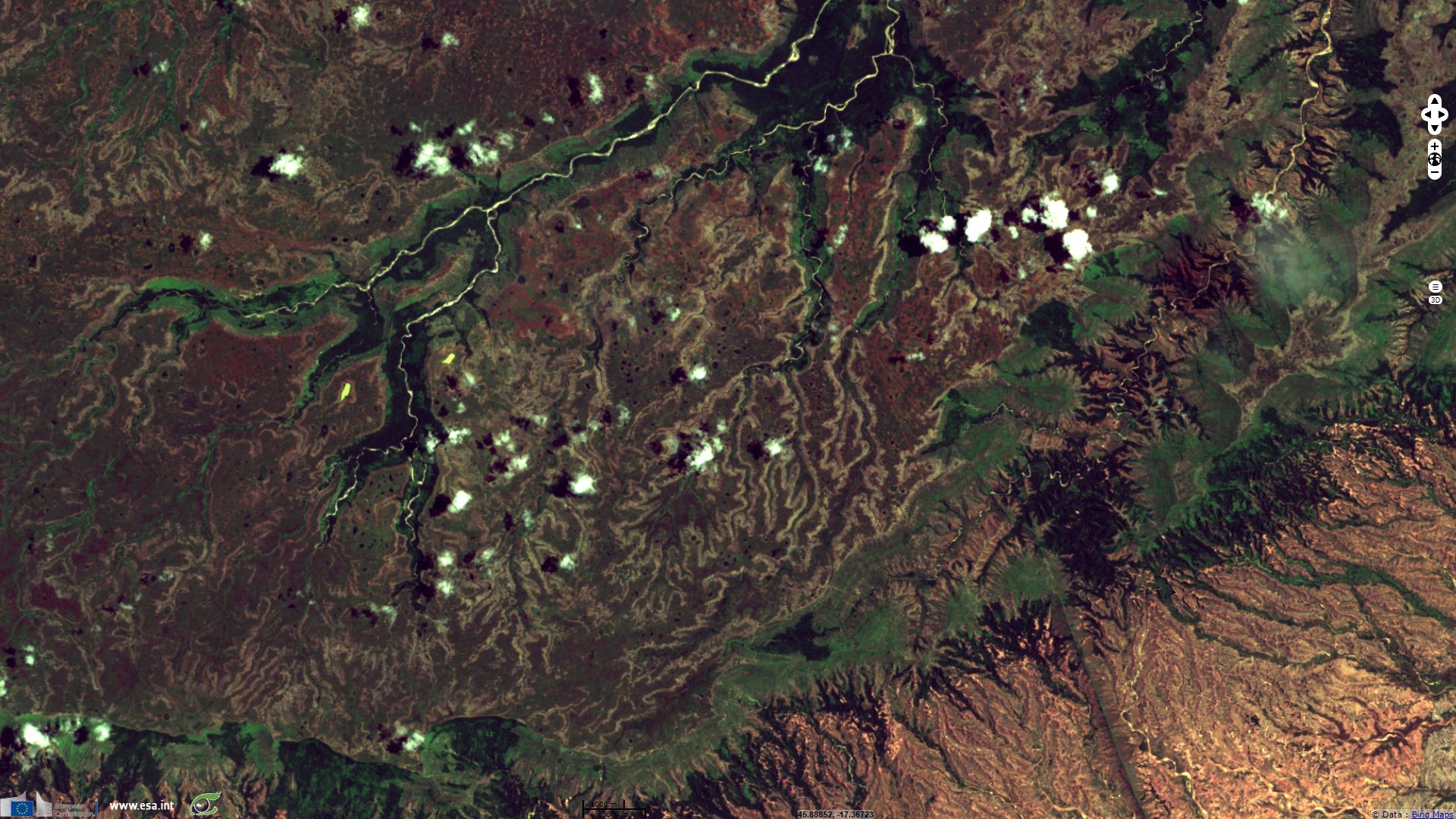 The traditional slash and burn technique is still heavily in use to produce charcoal as reported by wildmadagascar.org: "The endemic spiny forests of Madagascar are being cut at an alarming rate for charcoal production. In eking out a living selling little piles of charcoal along roads in southwestern Madagascar, local people turn towards the nearest plant source, which in this case is often Alluaudia trees." 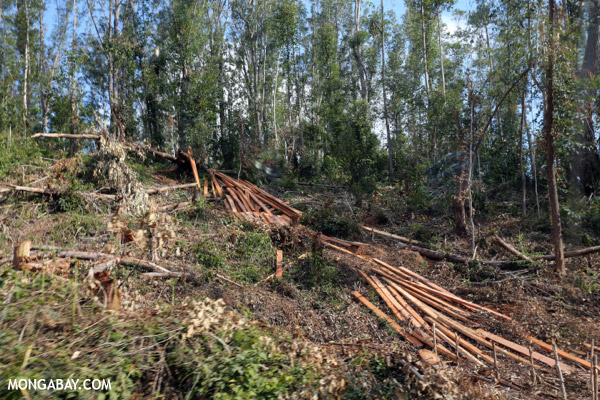 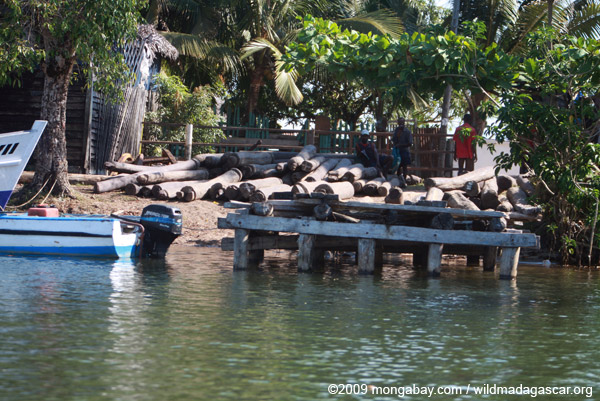 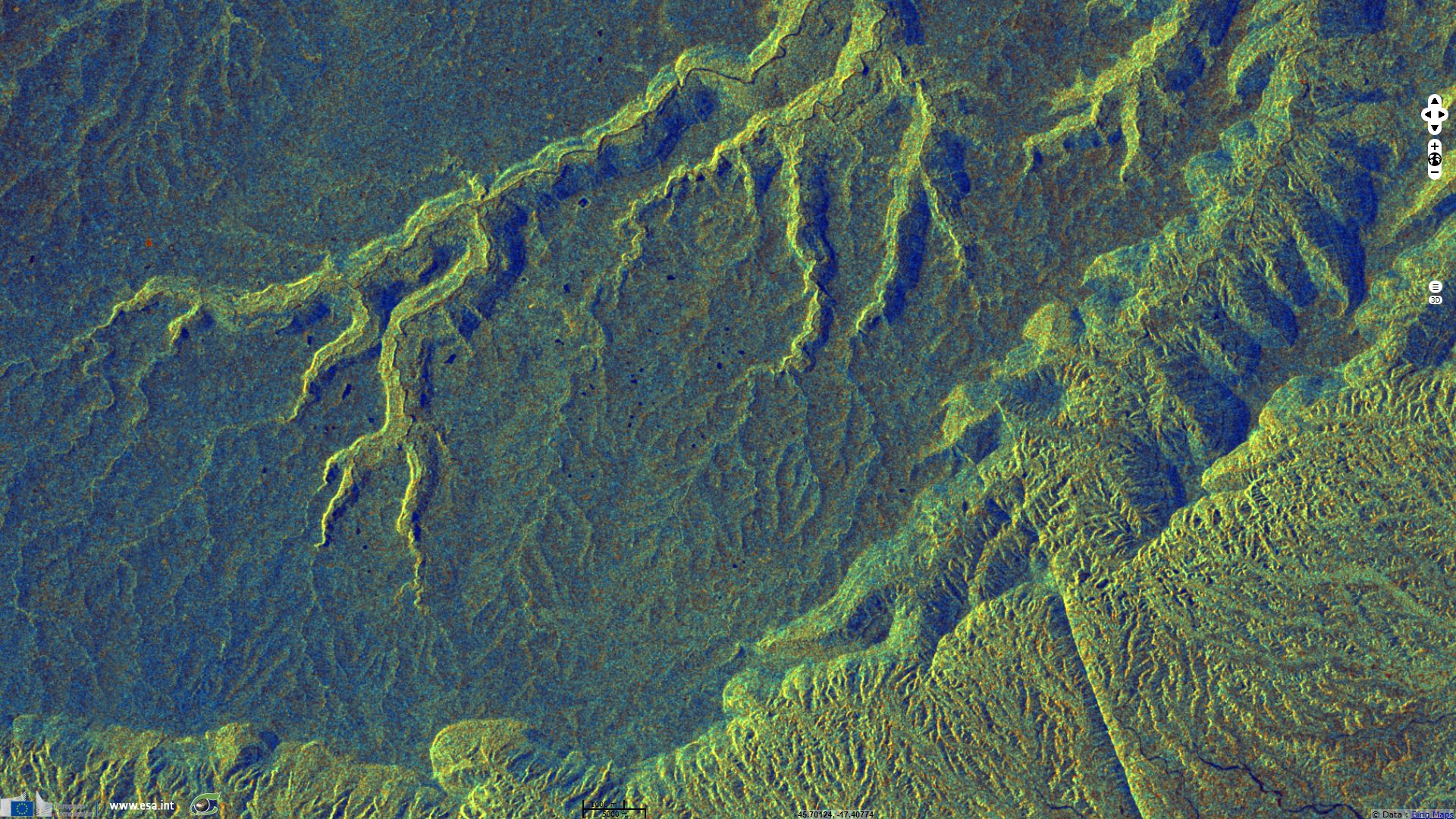 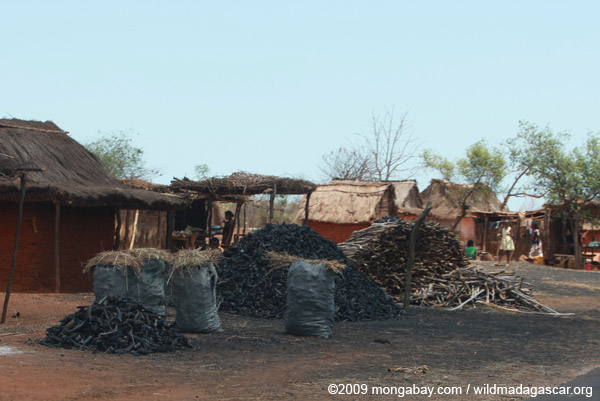 Charcoal for sale in Ankiliberengy village in Madagascar - Source: Rhett A. Butler for mongabay.com
www.wildmadagascar.org then explains the specificities of soil composition and nutrient cycling in rainforests: "Over two-thirds of the world's rainforests - including much of those in Madagascar - can be considered "wet-deserts" in that they grow on extremely poor soils which are acidic and low in minerals and nutrients. The key to the luxuriant vegetation of these forests lies in the rapid nutrient cycling of the rainforest. In the rainforest, most of the carbon and essential nutrients are locked up in living vegetation, dead wood, and decaying leaves. As organic material decays, it is recycled so quickly that few nutrients ever reach the soil, leaving it nearly sterile."
Fig. 5 - S2 (18.02.2018) - 4,3,2 natural colour - Vegetation remains only inside thalwegs, it has disappeared from slopes & tops.
2D view 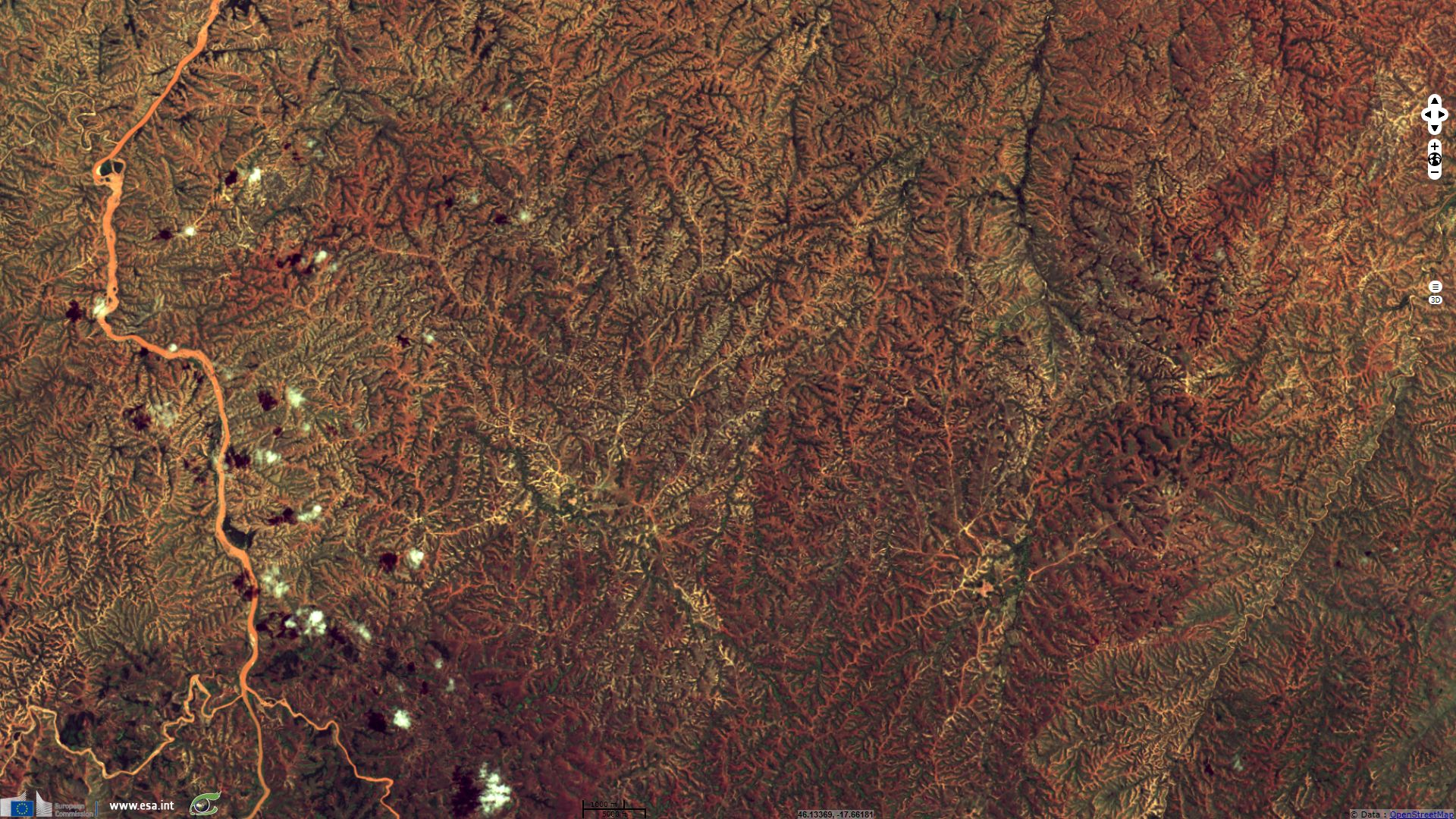 "Decaying matter (dead wood and leaf litter) is processed so efficiently because of the abundance of decomposers including bacteria, fungi, and termites. These organisms take up nutrients that are released as waste and when organisms die. Virtually all organic matter is rapidly processed, even fecal matter and perspiration. It is only a matter of minutes, in many rainforests, before dung is discovered and utilized by various insects. Excrement can be covered with brightly colored butterflies, beetles, and flies, while dung beetles feverishly roll portions of the waste into balls for use later as larval food. Tropical rainforest trees are well-adapted to the poor soils of their environment. Since the first 15-20 cm of soil is a compost of decaying leaves, wood, and other organic matter, it is richest pool of nutrients on the ground. Canopy trees are generally shallow rooted to better tap this resource."
Fig. 6 - S1 (10.02.2018) - vv,vh,ndi(vh,vv) colour composite - Dendritic hydrographic network east of Mahavavy river.
2D animation 2D view 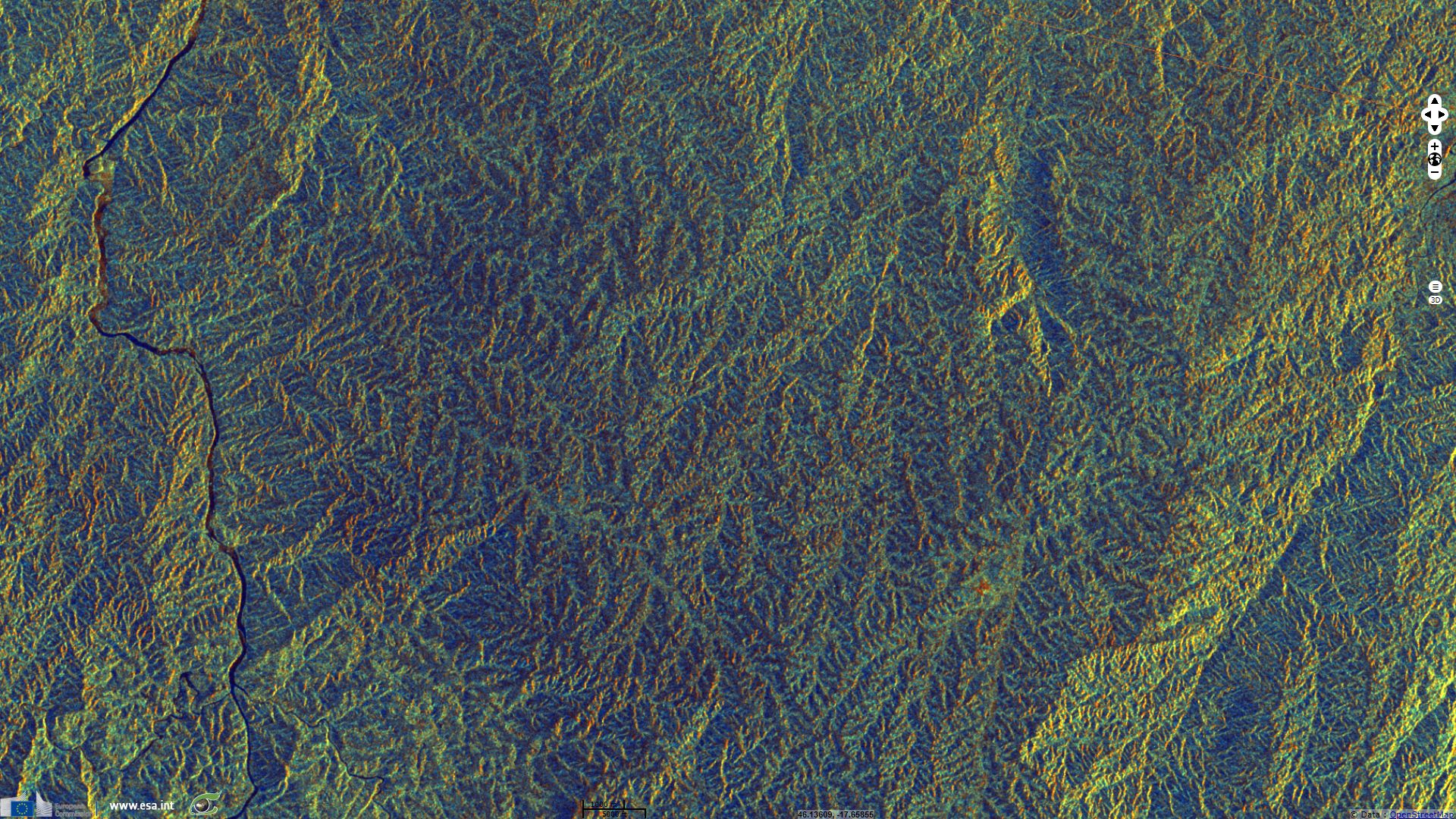 Then it shows how inappropriate crops lack sustainability and fail to protect against soil erosion: "Slash-and-burn agriculture, known locally as tavy is an important part of Malagasy culture and the Malagasy economy. Tavy is mostly used for converting tropical rainforests in Madagascar into rice fields. Typically an acre or two of forest is cut, burned, and then planted with rice. After a year or two of production the field is left unused for 4-6 years before the process is repeated. After 2-3 such cycles the soil is exhausted of nutrients and the land is likely colonized by scrub vegetation or grass. On slopes, the new vegetation is often insufficient to anchor soils, making erosion and landslides a problem."
Fig. 7 - S2 (24.08.2017) - 4,3,2 natural colour - Eroded, lavaka-filled landscape in the Central Plateau.
2D view 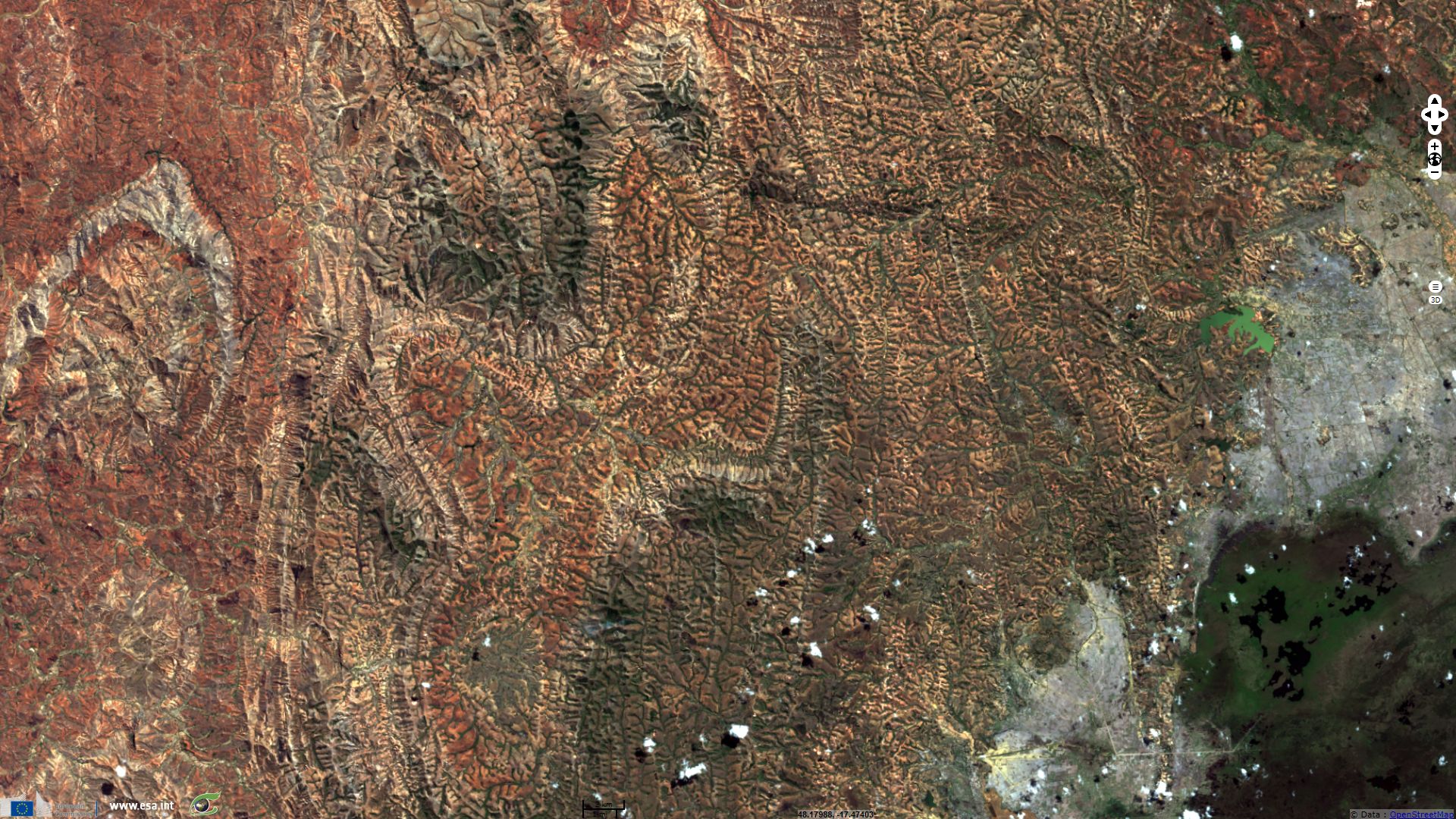 "As currently practiced with fallow periods too brief for regrowth after land abandonment, tavy effectively destroys the nutrient cycle and resource base that enables forest to grow on deficient soils. While nutrients released from burning vegetation may sustain one or two years of crop production, in the longer term the loss of living trees and decaying plant matter means that there is no longer fuel to feed the cycle. Without the mycorrhizae and other soil organisms to fix nutrients, vital minerals are rapidly leached by the sun and eroded away with rain. Tavy, as traditionally practiced with long (10 years or more) fallow periods, can probably be an effective strategy for subsistence agriculture in the forests of Madagascar.nfortunately population/economic pressures and the rapidly disappearing forest cover in eastern Madagascar have made it difficult to carry out tavy in such a manner. The problem is that it is typically in the best short-term interest for Malagasy to clear as much forest as quickly as possible to maximize rice production. From their perspective, as long as there is more forest land freely availabe for clearing, you might as well take advantage of it before a neighbor does." "Traditionally in many villages, the more money someone made, the more money was put back into land-clearing." 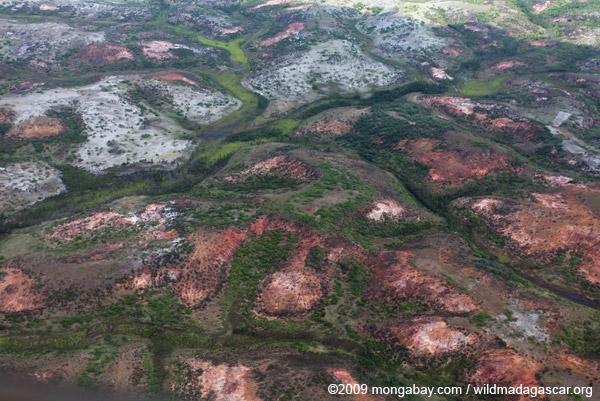 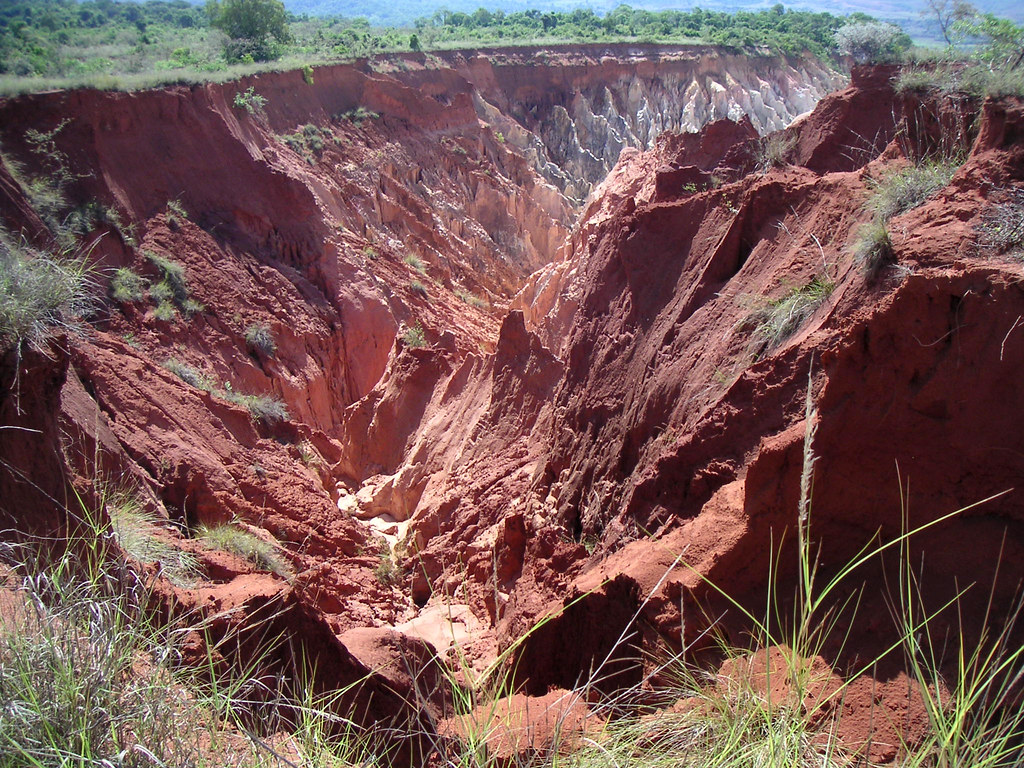 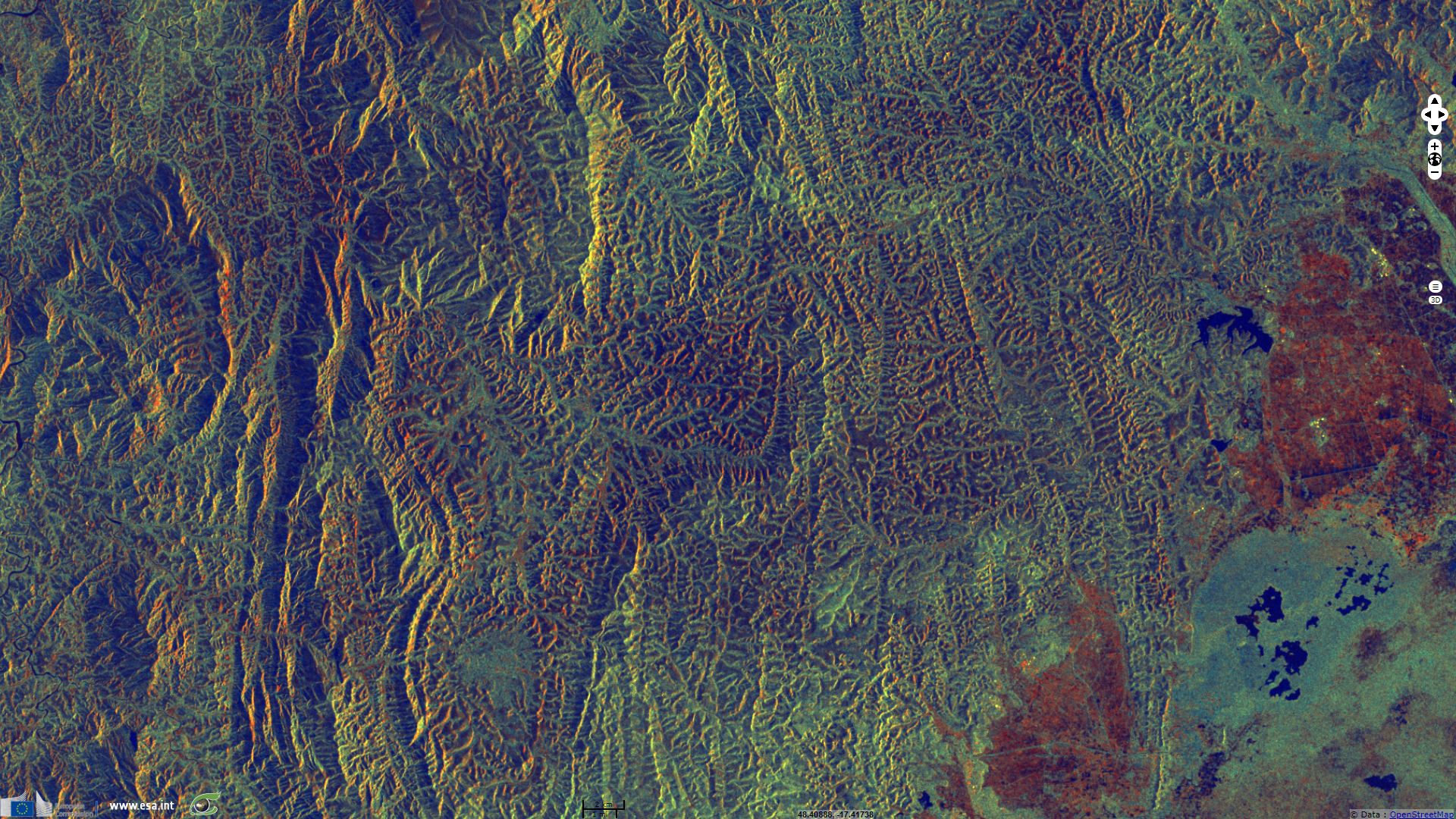 http://www.wildmadagascar.org then introduces the lavakas, now typical of Madagascar: "The central of highlands of Madagascar once had significant forest cover but generations of clearing for Zebu cattle and agriculture have left most of the countryside a sea of grass. Lacking roots to anchor the soil, hillsides slide away (locally known as "lavaka") leaving deep red scars across the landscape and eroding massive amounts of topsoil into rivers and streams. In some areas the French planted Eucalyptus and pine plantations to help stem erosion and provide wood for timber." In other areas, the site narrates how degradations can worsen: "Lac Alaotra, Madagascar's largest lake, was the country's rice bowl, responsible for feeding a large part of the island's population. At one time the vast lake was surrounded by tropical forest, but today this has been cleared for farmland, and the hills are now bare and riddled with "lavaka," deep, red, eroded gullies. With rain - the soil left unprotected without forest cover - tons of red earth bleed into the lake, and the lake is fast disappearing. Today the lake has a maximum dry season depth of only two feet (60 cm) and the region can no longer produce enough rice to supply the growing population; Madagascar must now import rice. Locals are rapidly burning the reedbeds around the lake to create more rice fields, only resulting in more siltation of the lake."
Fig. 9 - S2 (18.02.2018) - 4,3,2 natural colour - Vegetation-filled lavakas form a pointillist scenery near the laterite-loaded Mahavavy.
2D view 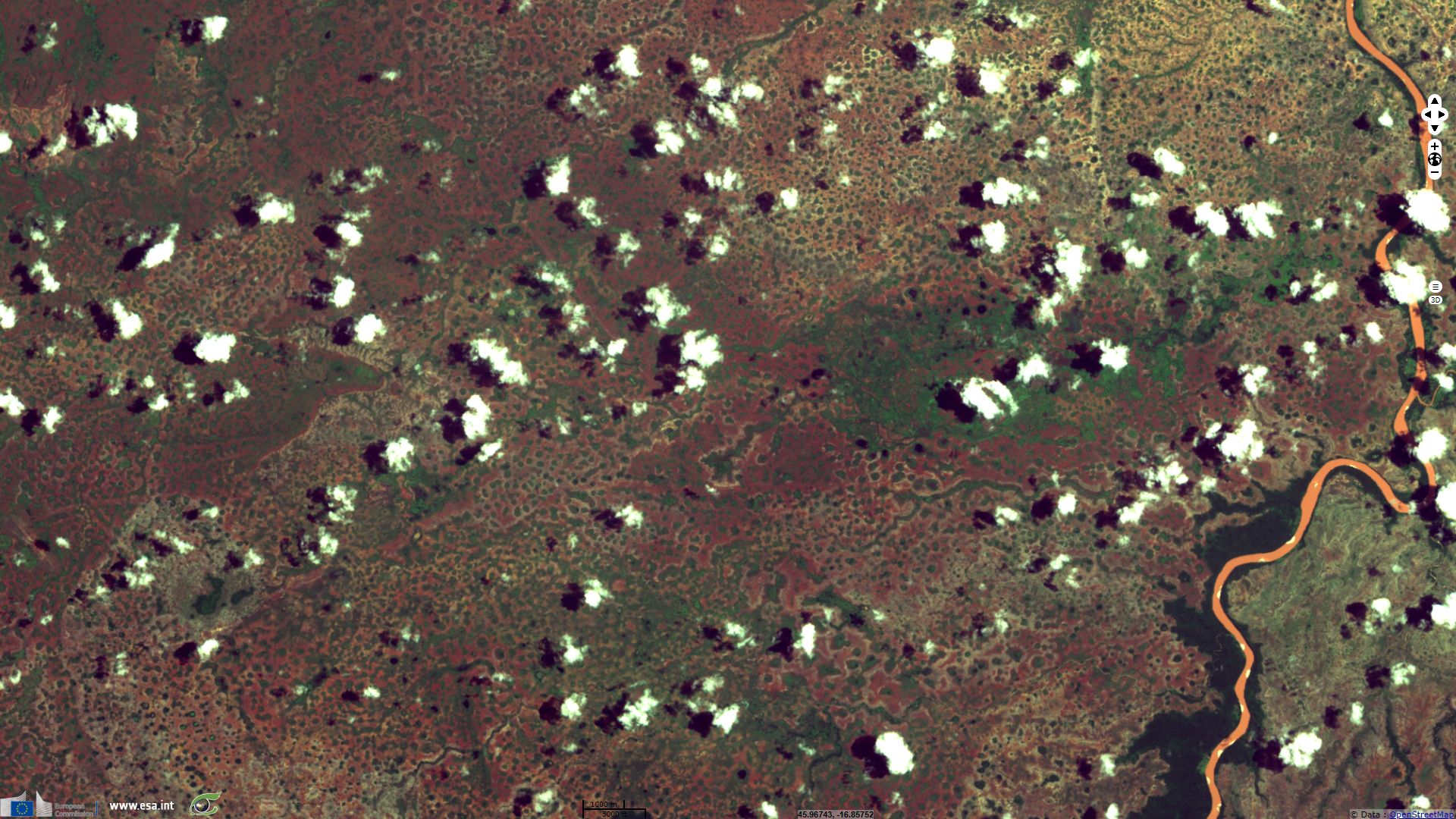 As the deforestation continues, it reduces the potential revenues that could be earned from sustainable exploitation of forestry products. Soil depletion increases which in the end worsens agriculture yield, and push more people toward short-term ressources exploitation. The quantity and diversity of both fauna and flora dwindles, hurting ecotourism perspective. "The average Malagasy is poorer now than he was a generation ago. Most Malagasy live on less than a dollar per day and nearly half of the country's children under five years of age are malnourished. Rural dwellers in particular have seen their quality of life erode as environmental degradation has taken its toll."
Fig. 10 - S1 (17.02.2018) - vv,vh,ndi(vh,vv) colour composite - Associated radar view.
2D animation 2D view 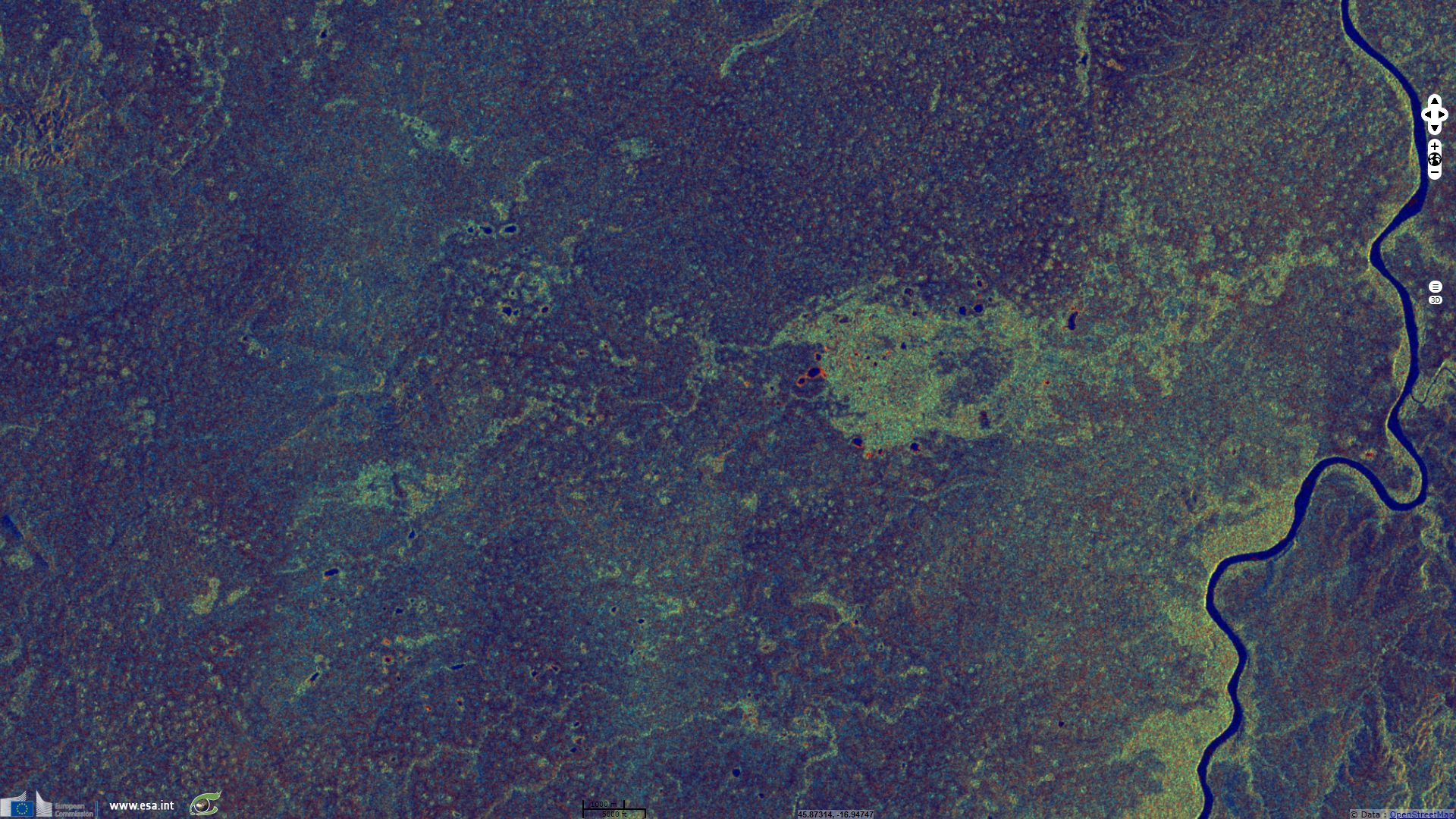 However, some solutions exists to break the cycle. Rice can be produced otherwise as wrote Tim Cocks for Reuters: "Traditional "slash-and-burn" agriculture in which forests are cleared for planting subsistence crops such as rice has decimated the island's rainforest cover, conservationists say. World Wildlife Fund (WWF) representative Jean Paul Paddack said teaching new farming technique was one way in which WWF and the government were trying to curb slash-and-burn. 'We are telling them there are more efficient ways of producing rice, like the new intensive rice system, which can quadruple rice yields per hectare.' www.wildmadagascar.org also tells of possible alternative subsistence crops: "A better approach to addressing the needs of poor Malagasy farmers may be improving and intensifying currently existing agricultural projects and promoting alternative cultivation techniques—notably permaculture as "savoka" gardens. Savoka gardens are planted on fallow tavy plots and are planned as "a carefully selected succession of trees and plants on the fallow land that re-enriches the soil at the same time as producing a steady stream of food crops and other useful products." Unfortunately, success with such regimes has proved elusive thus far. Tavy and the devotion to rice is so established as a cultural practice that it has been very difficult to interest the Malagasy in alternative crops that might improve soil fertility and increase crop yields." Foreign NGOs such as Coeur de forêt train people to sustainable exploitation of forestry products, other than subsistence crops, so that they can reforest near their village, improve their standard of living and keep the natural resources pristine. Finally, ecotourim also offers perspectives if enough investment is made on infrastructure and wildlife protection, according to Rhett Butler who wrote in mongabay.com: "Madagascar has a lot of offer visitors but due to its remoteness, lack of infrastructure, and poverty it has largely failed to capitalize on its natural tourist attractions which include some of the best wildlife on the planet and fantastic landscapes." Adrian Pitches wrote for BBC that "Madagascar has moved to protect its priceless wildlife (three-quarters of the estimated 200,000 plant and animal species are found nowhere else) and has identified the additional forests and wetlands that will more than treble the area of nature reserves from 1.7 million hectares to 6 million ha."
The views expressed herein can in no way be taken to reflect the official opinion of the European Space Agency or the European Union.
Contains modified Copernicus Sentinel data 2022, processed by VisioTerra.