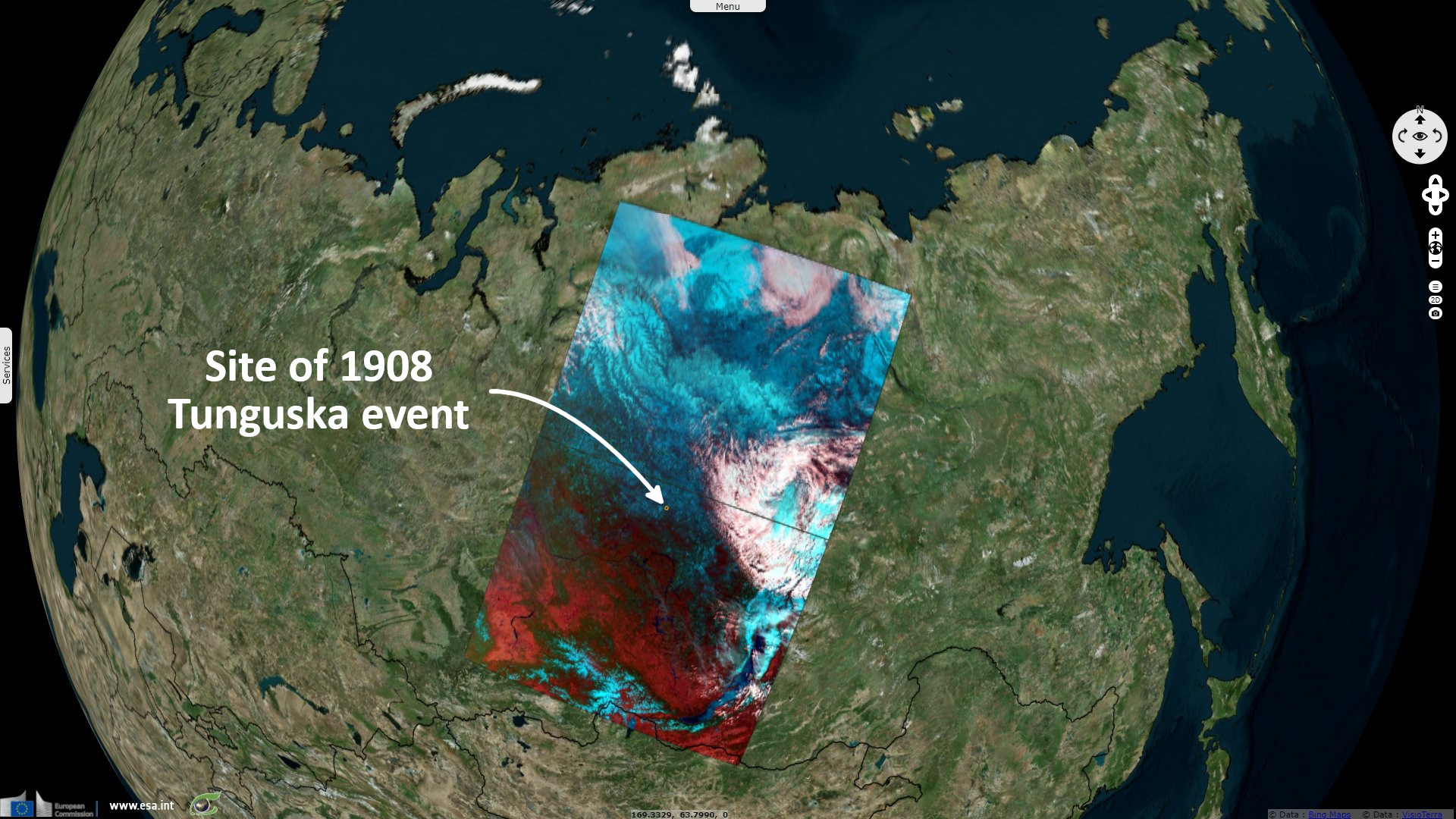 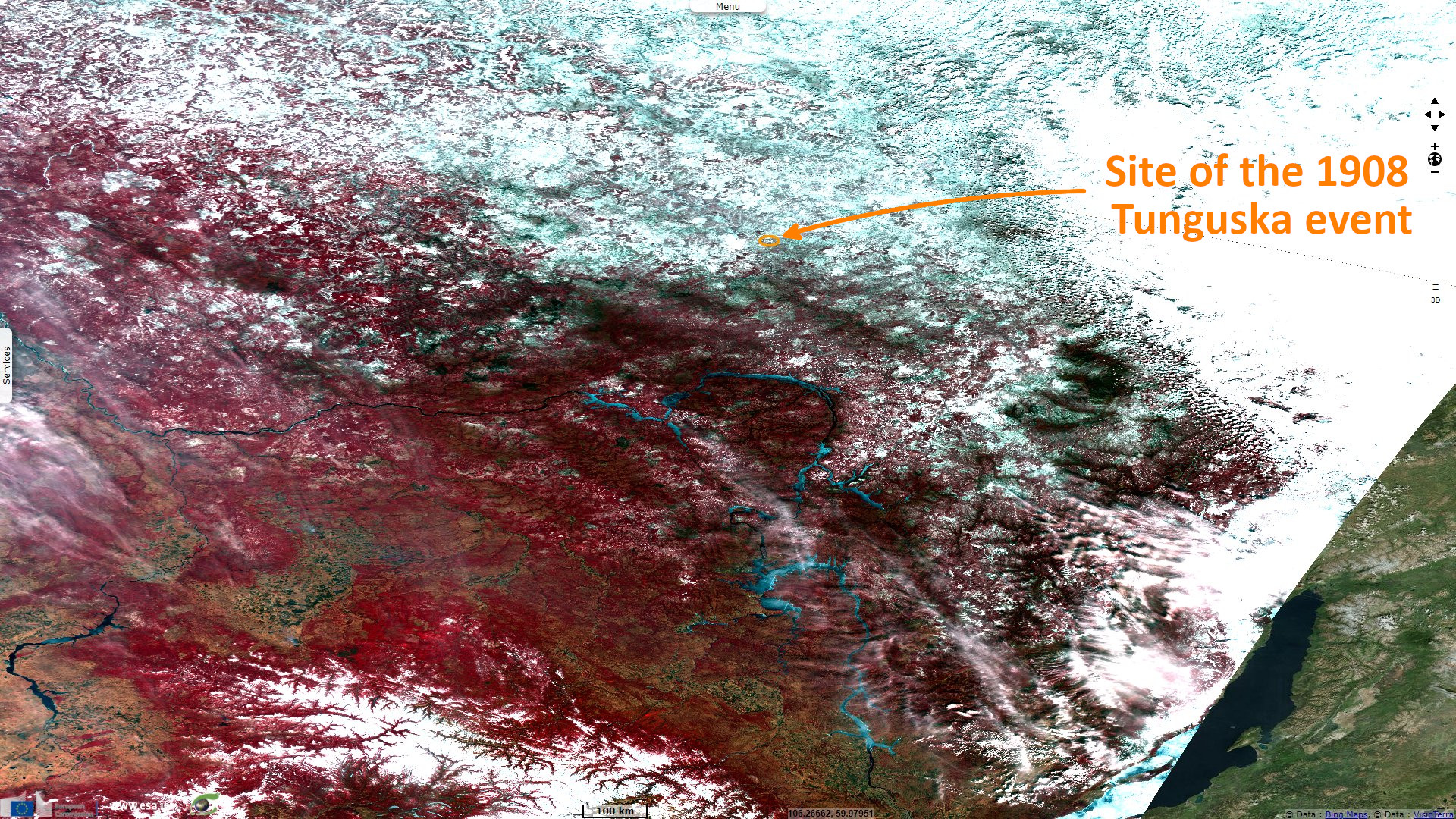 In an article she wrote on 30 April 2020 for The Siberian Times, Olga Gertcyk introduces the 1908 Tunguska Event as follows: "Scientists give startling theory for 1908 Tunguska Event in Siberia which had force of 185 Hiroshima bombs. For decades experts have been baffled by the shattering detonation which wiped out more than 80 million trees over a remote area of the then tsarist empire. Explanations have focused on a meteor exploding in the atmosphere, a meteorite striking the surface, or a comet composed mainly of ice, yet apart from the wholesale destruction at ground level in an unpopulated area, there is only minuscule evidence of a space object."
Fig. 3 - COP-DEM - Despite the depressions seen in the scenery, there was no impact crater.
3D view 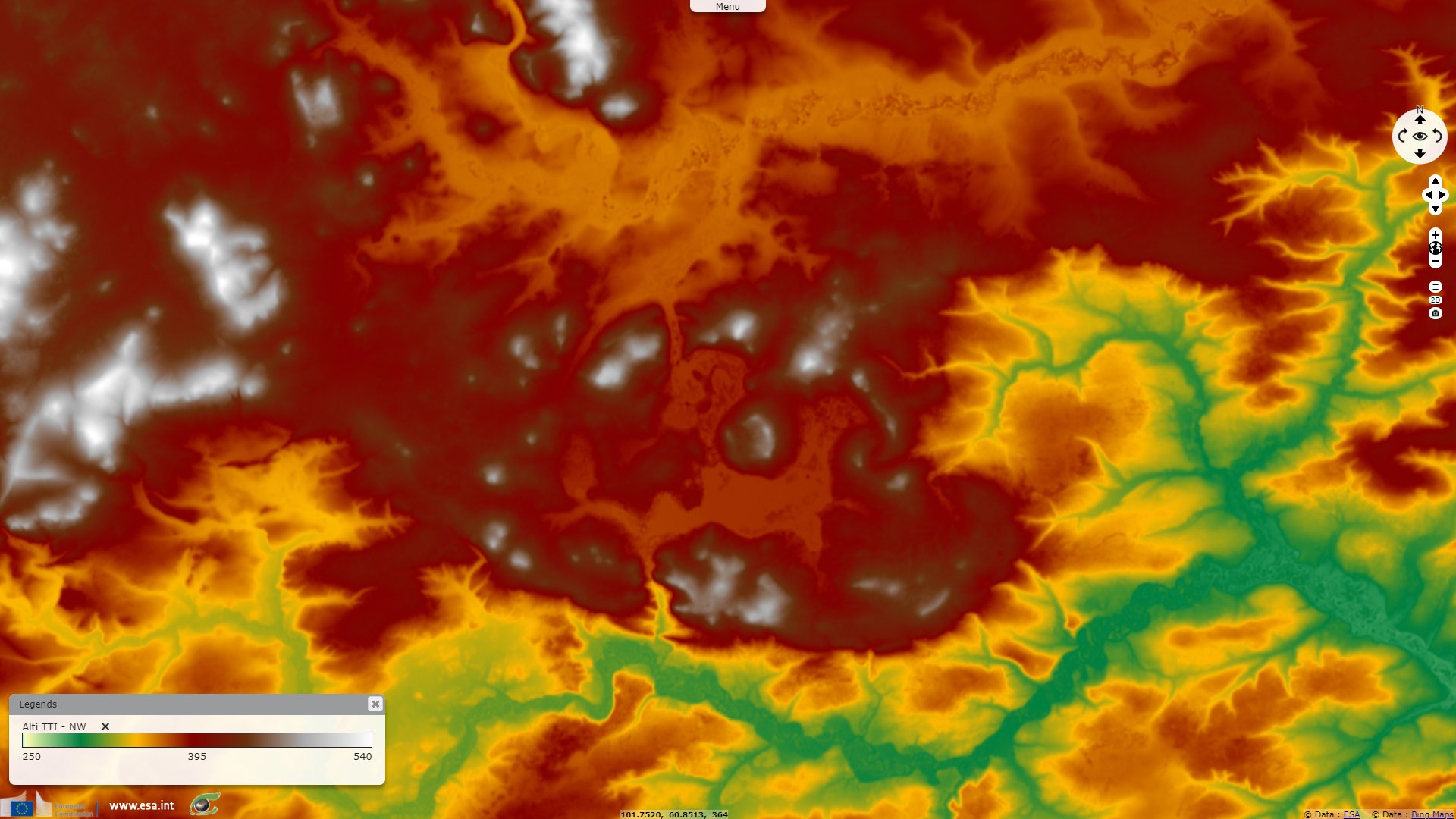 "The Tunguska Event led to a host of theories on the cause apart from a meteorite, from a massive volcanic eruption, to comet mainly composed of ice not solid space rock, and more. Local Evanki people believed it was a visitation by an angry god called Ogdy."
Fig. 4 - S1 (2021.08.11; 2021.09.04; 2021.09.28) - Radar view of the approximate epicentre of the Tunguska event.
3D view 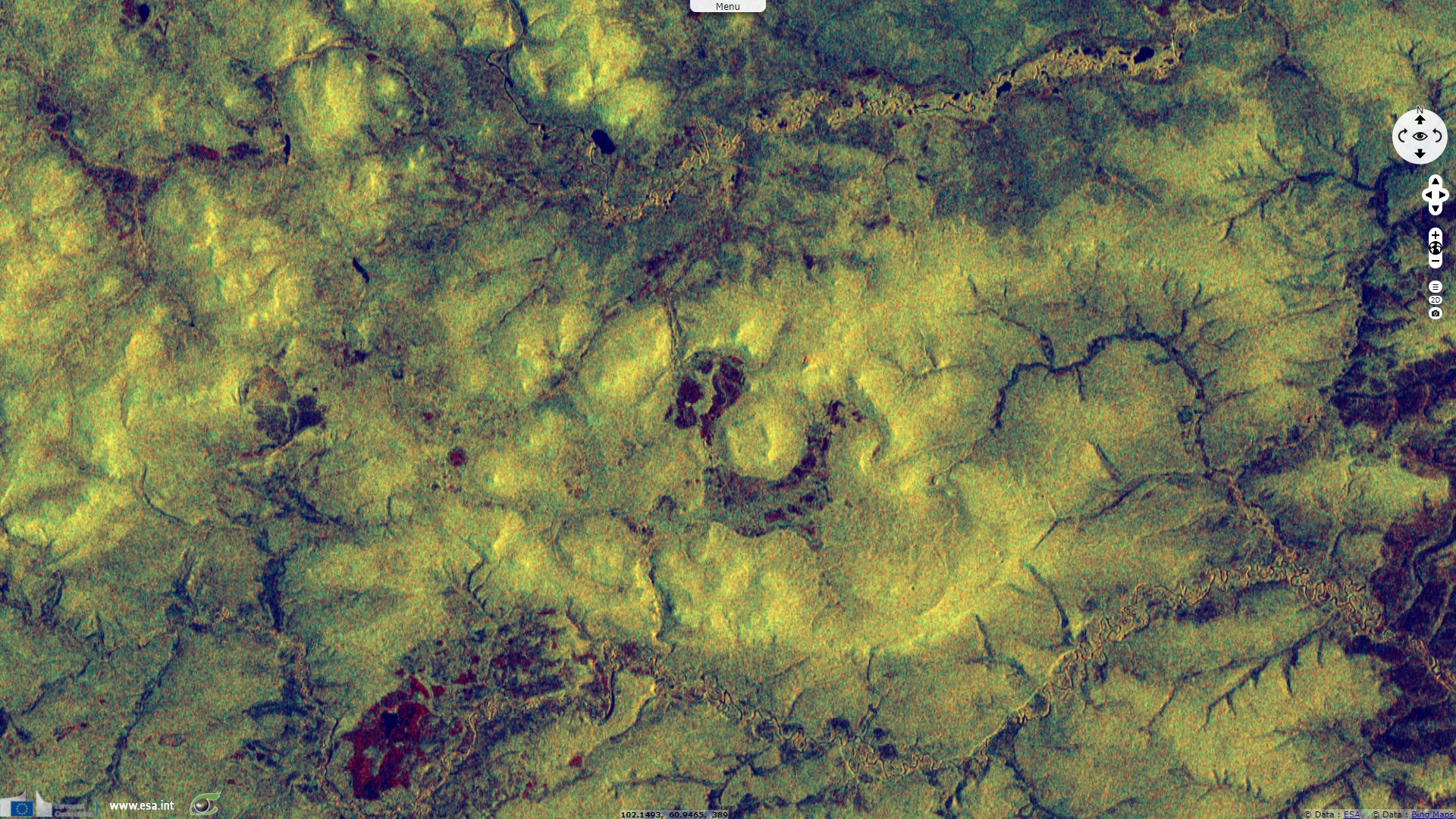 William K. Hartmann of the Planetary Science Institute of Tucson, Arizona, details his hypothesis, one of the most popular: "Because the object exploded up in the atmosphere, instead of hitting the ground, it left no crater. The effect on the ground was limited to devastation of a large forest area. At ground zero, tree branches were stripped, leaving trunks standing up. But at distances from roughly 5 out to 16 kilometres, the trees were blown over, lying with tops pointed away from the blast. No one was known to have been this close to the blast. The closest humans were probably herders camped in tents roughly 30 km from ground zero."
Fig. 5 - S2 (14.05.2021) - View in mid-May when snow is still present.
3D view 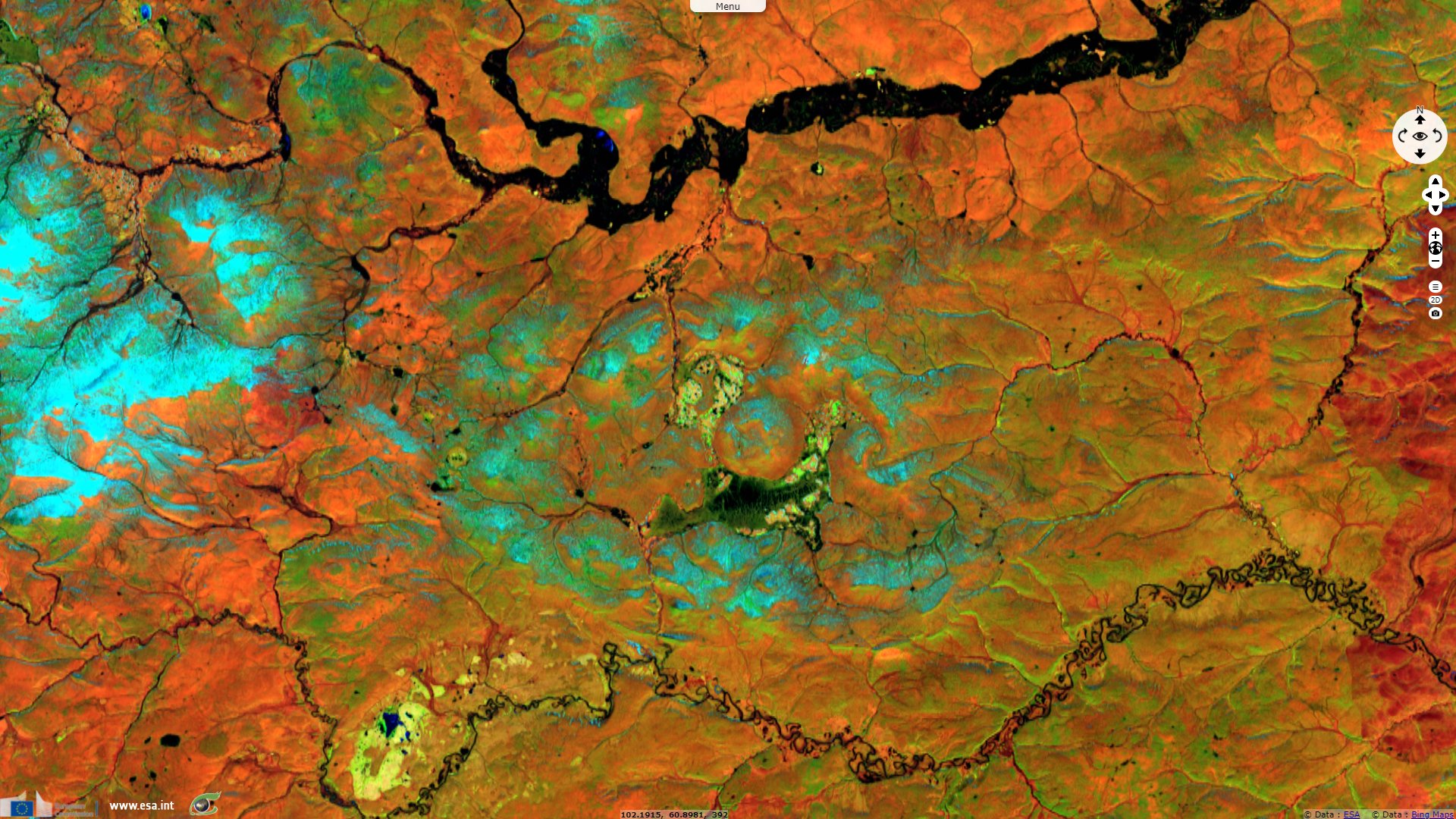 "They related: 'Early in the morning when everyone was asleep in the tent, it was blown up in the air along with its occupants. Some lost consciousness. When they regained consciousness, they heard a great deal of noise and saw the forest burning around them, much of it devastated.' 'The ground shook and incredibly prolonged roaring was heard. Everything round about was shrouded in smoke and fog from burning, falling trees. Eventually the noise died away and the wind dropped, but the forest went on burning.'"
Fig. 6 - S2 (30.05.2018) - By the end of May, the snow has melt, letting vegetation grow again over possible traces.
3D view 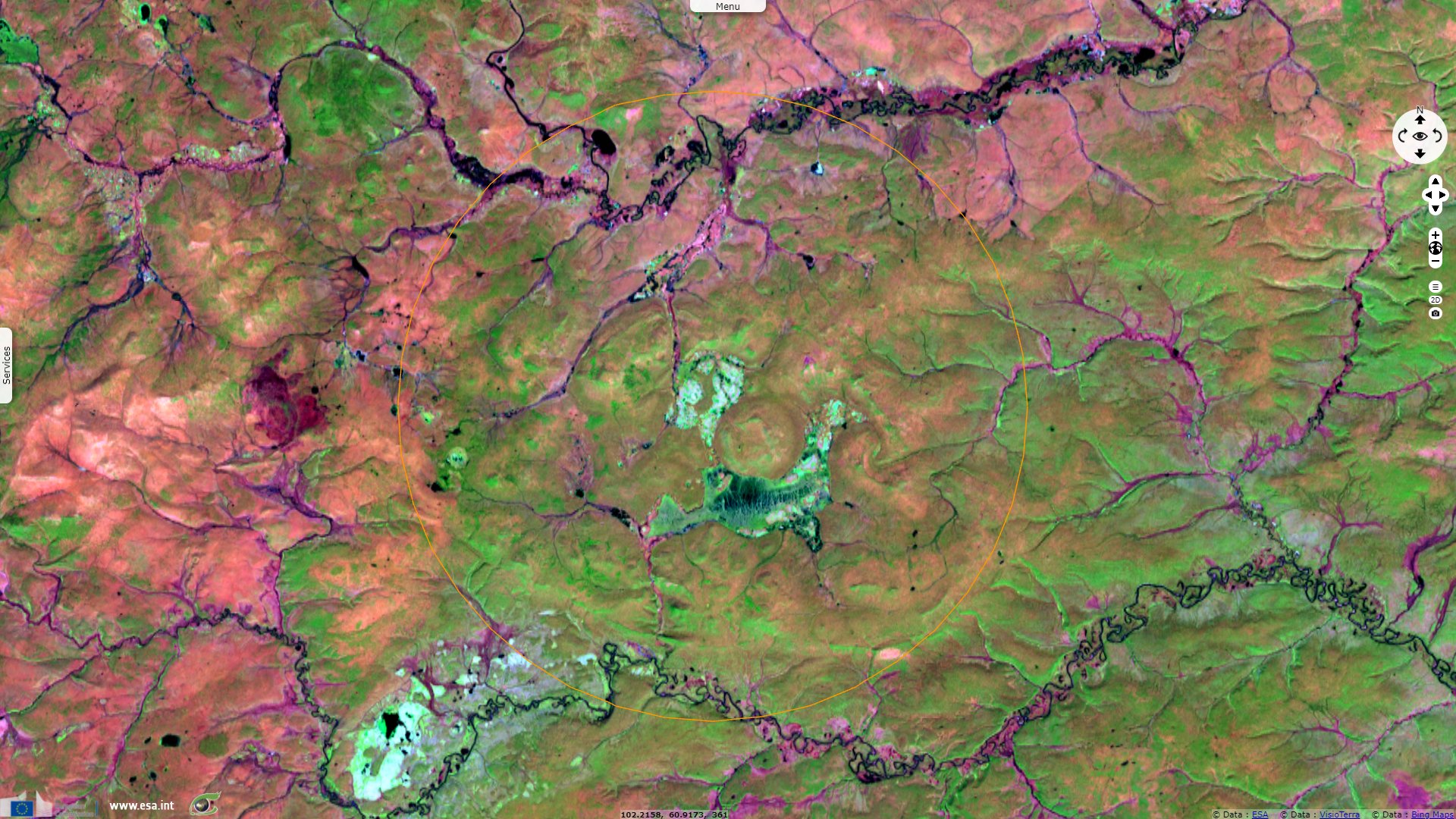 On 13 July 1908, Krasnoyaretz newspaper published the following observations: "Kezhemskoye village. On the 17th [June] an unusual atmospheric event was observed. At 7:43 the noise akin to a strong wind was heard. Immediately afterward a horrific thump sounded, followed by an earthquake that literally shook the buildings as if they were hit by a large log or a heavy rock. The first thump was followed by a second, and then a third. Then the interval between the first and the third thumps was accompanied by an unusual underground rattle, similar to a railway upon which dozens of trains are travelling at the same time."
Fig. 7 - S2 (14.09.2020) - Burns scars are visible in the boreal landscape.
3D view 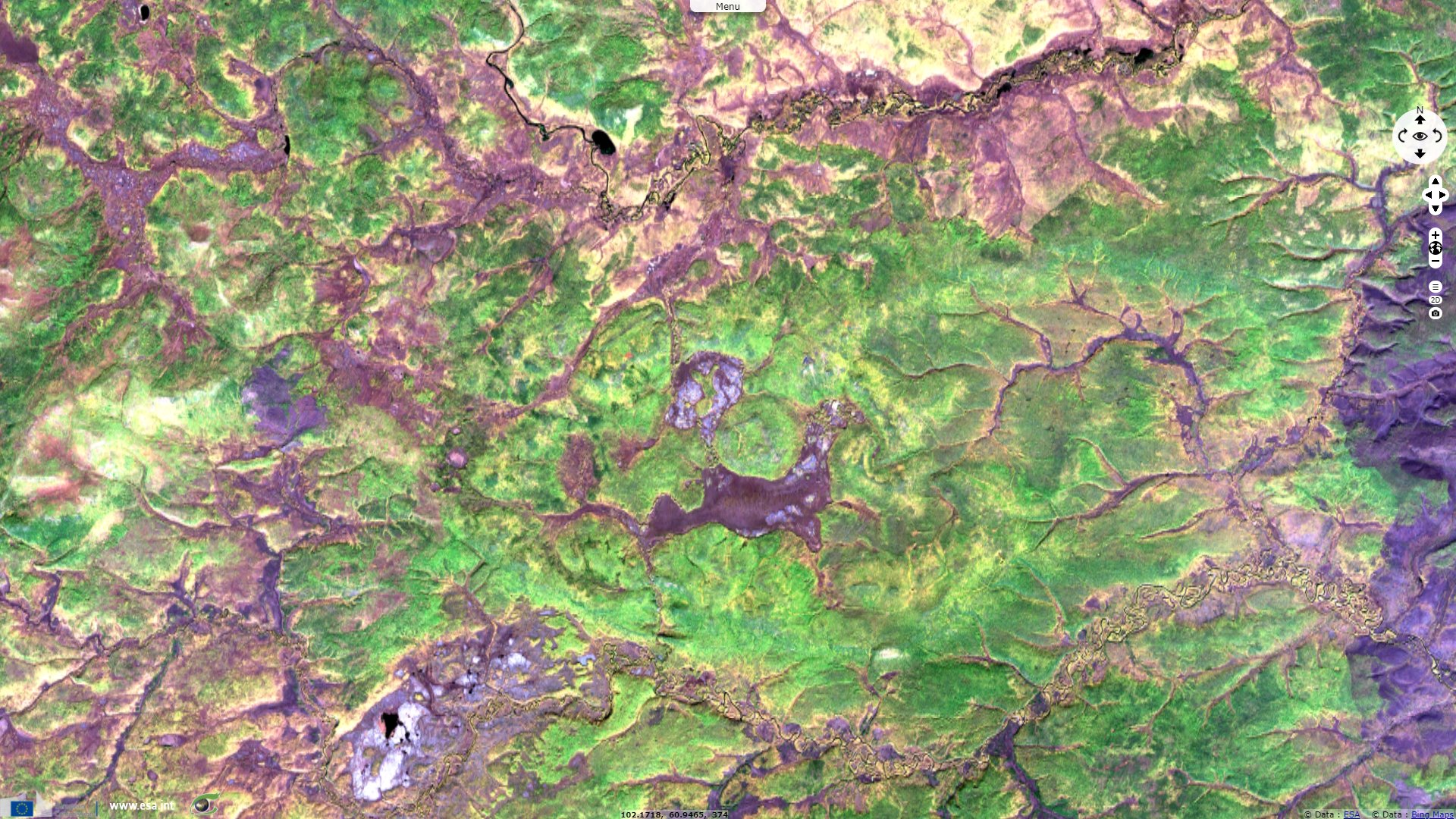 "Afterward, for 5 to 6 minutes an exact likeness of artillery fire was heard: 50 to 60 salvoes in short, equal intervals, which got progressively weaker. After 1.5–2 minutes after one of the "barrages" six more thumps were heard, like cannon firing, but individual, loud and accompanied by tremors. The sky, at the first sight, appeared to be clear. There was no wind and no clouds. Upon closer inspection to the north, i.e. where most of the thumps were heard, a kind of an ashen cloud was seen near the horizon, which kept getting smaller and more transparent and possibly by around 2–3 p.m. completely disappeared."
Fig. 8 - S2 (24.09.2020) - No impact crater has been found, only possible traces of sublimated elements.
3D view 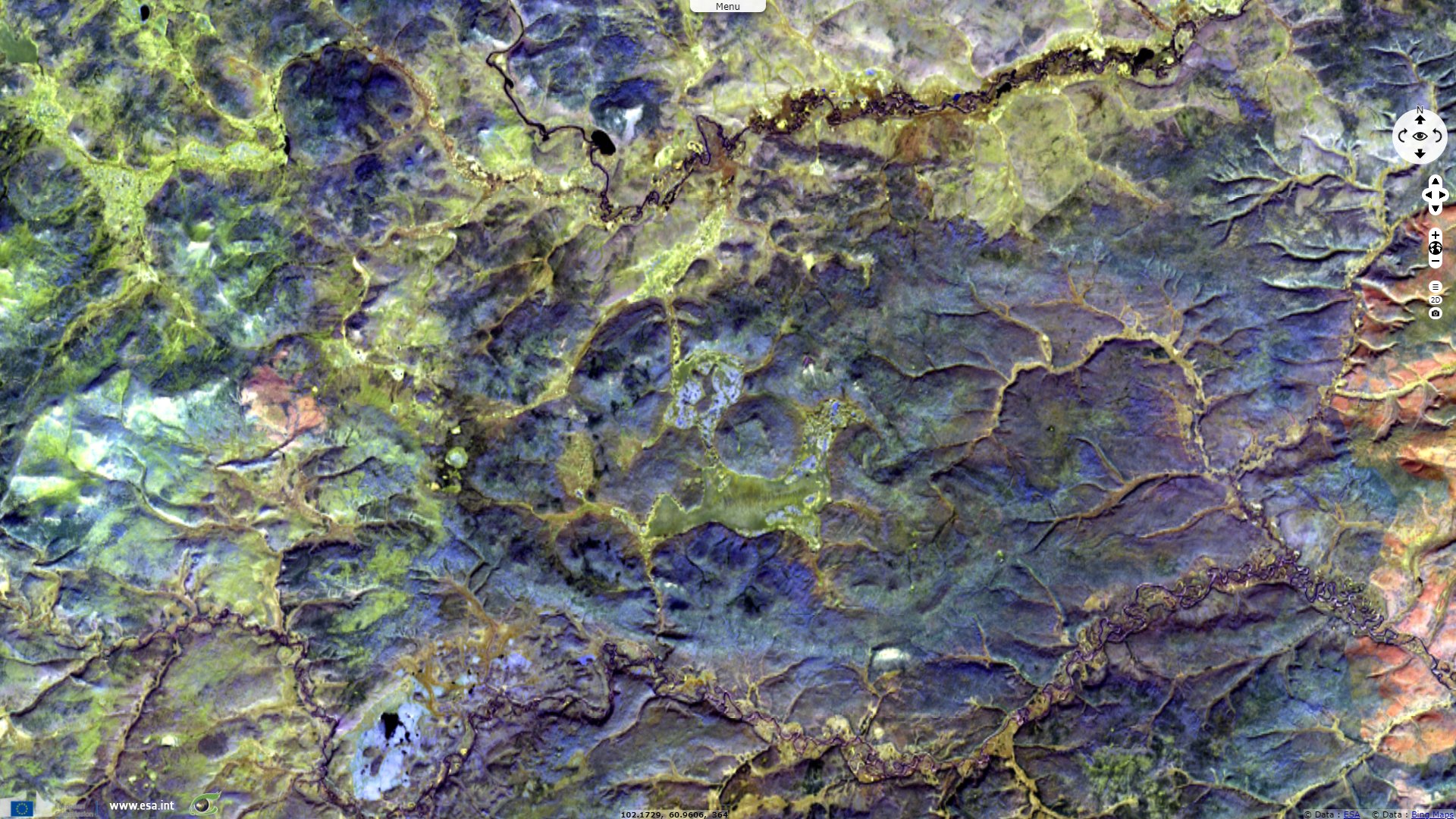 William K. Hartmann relates other observations, further away: "Seismic vibrations were recorded by sensitive instruments as much as 1000 km away. At 500 km, observers reported 'deafening bangs' and a fiery cloud on the horizon. About 170 km from the explosion, the object was seen in the cloudless, daytime sky as a brilliant, sunlike fireball; thunderous noises were heard. At distances around 60 km, people were thrown to the ground or even knocked unconscious; windows were broken and crockery knocked off shelves. Probably the closest observers were some reindeer herders asleep in their tents in several camps about 30 km from the site. They were blown into the air and knocked unconscious; one man was blown into a tree and later died. 'Everything around was shrouded in smoke and fog from the burning fallen trees.'" The Event caused shockwaves as far away as Britain and dust from the explosion lit up the night sky in its wake in Europe and even America.
Fig. 9 - S2 (24.09.2020) - At the end of the summer, the vegetation cover has grown to its maximal extent.
3D view 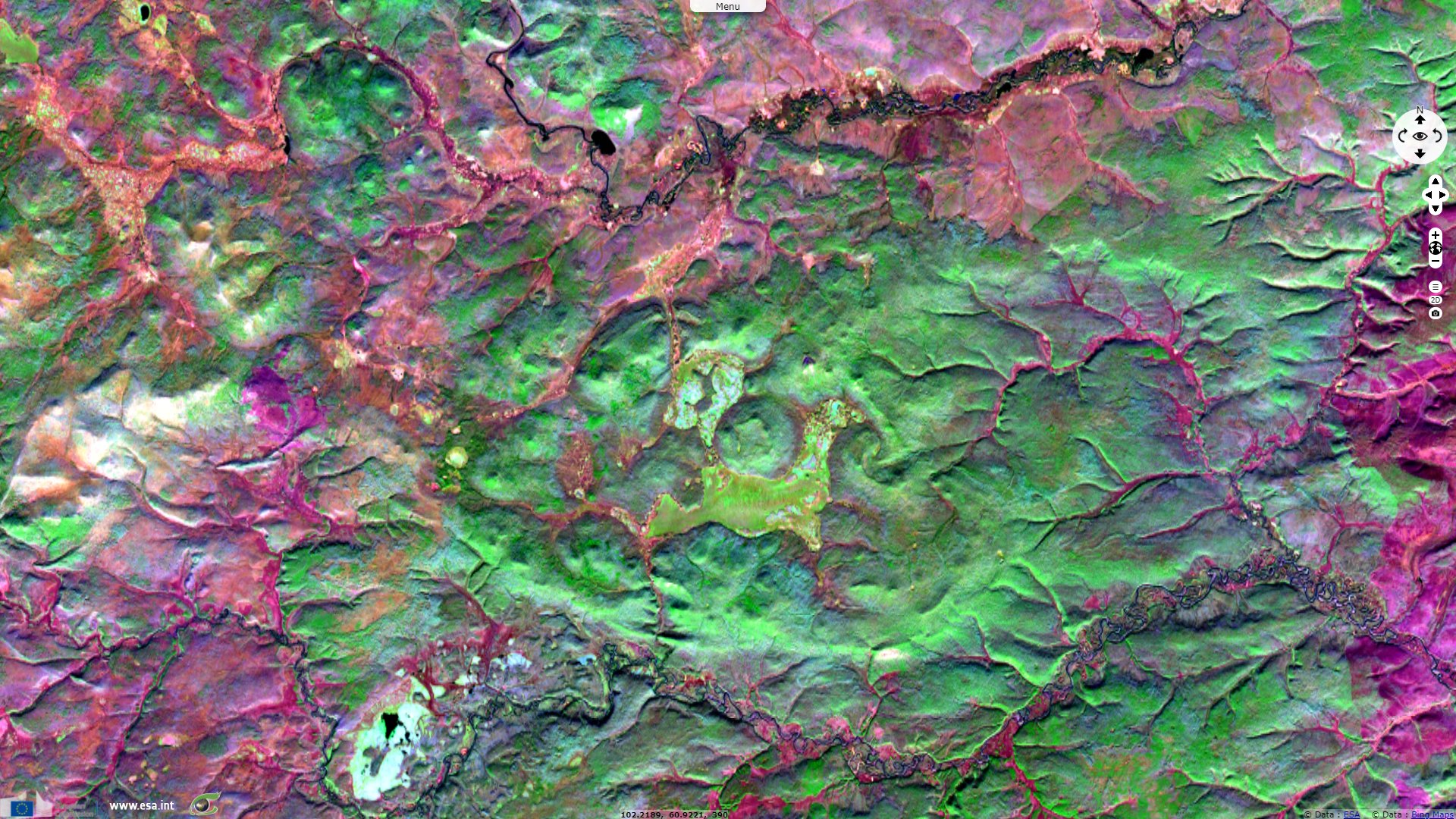 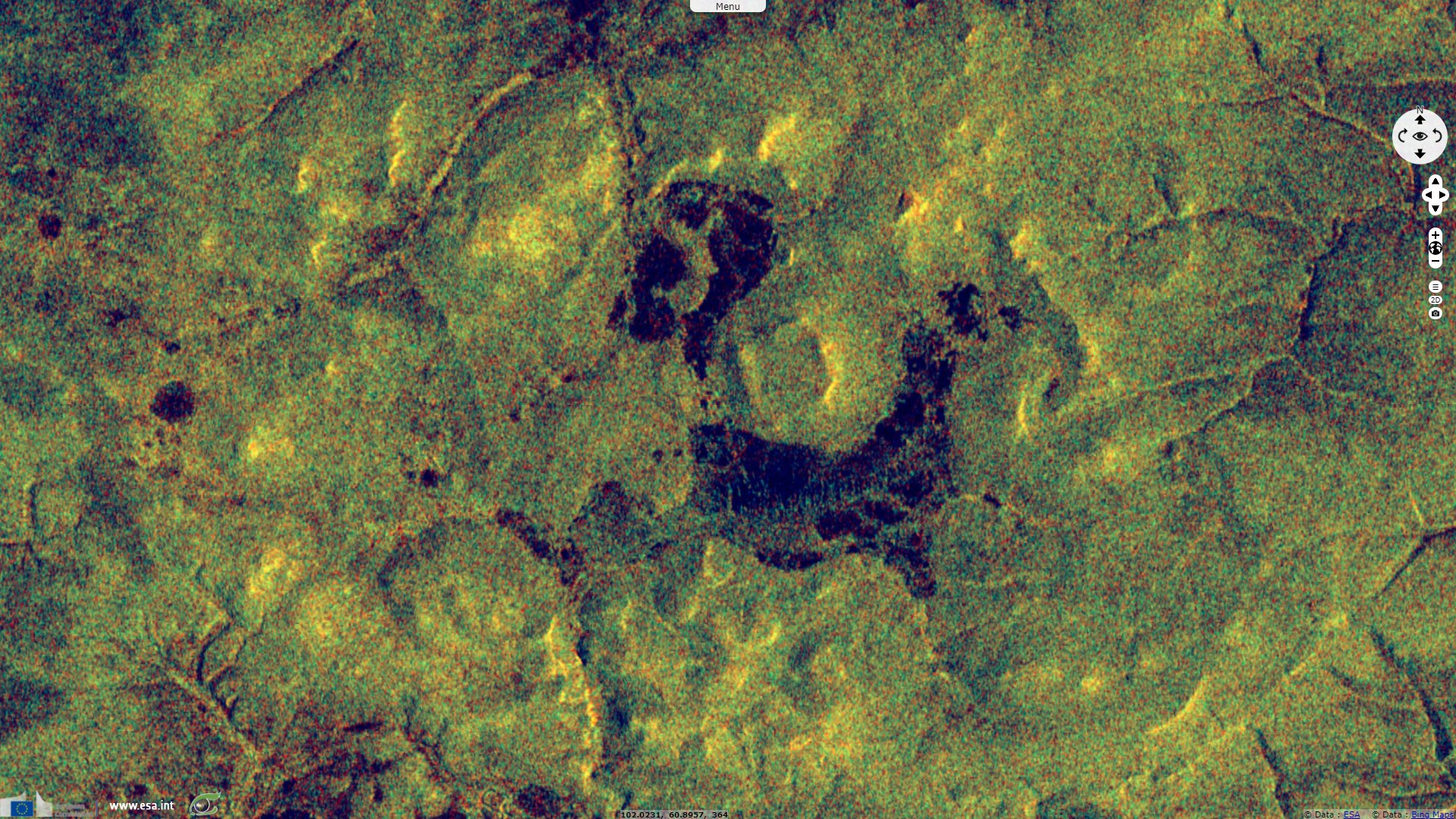 "Early researchers thought the object might be a weak, icy fragment of a comet, which vaporized explosively in the air, and left no residue on the ground. However, modern planetary scientists have much better tools for understanding meteorite explosion in the atmosphere. As a meteorite slams into the atmosphere at speeds around 12 to 20 km/sec or more, it experiences a strong mechanical shock, like a diver bellyflopping into water. This can break apart stones of a certain size range, which explode instead of hitting the ground. Some of them drop brick-sized fragments on the ground, but others, such as the one that hit Siberia, may produce primarily a fireball and cloud of fine dust and tiny fragments."
Fig. 11 - S2 (11.02.2022) - The swamps are filled in ice during winter, preventing expeditions to search the bottom of the ponds year-round.
3D view 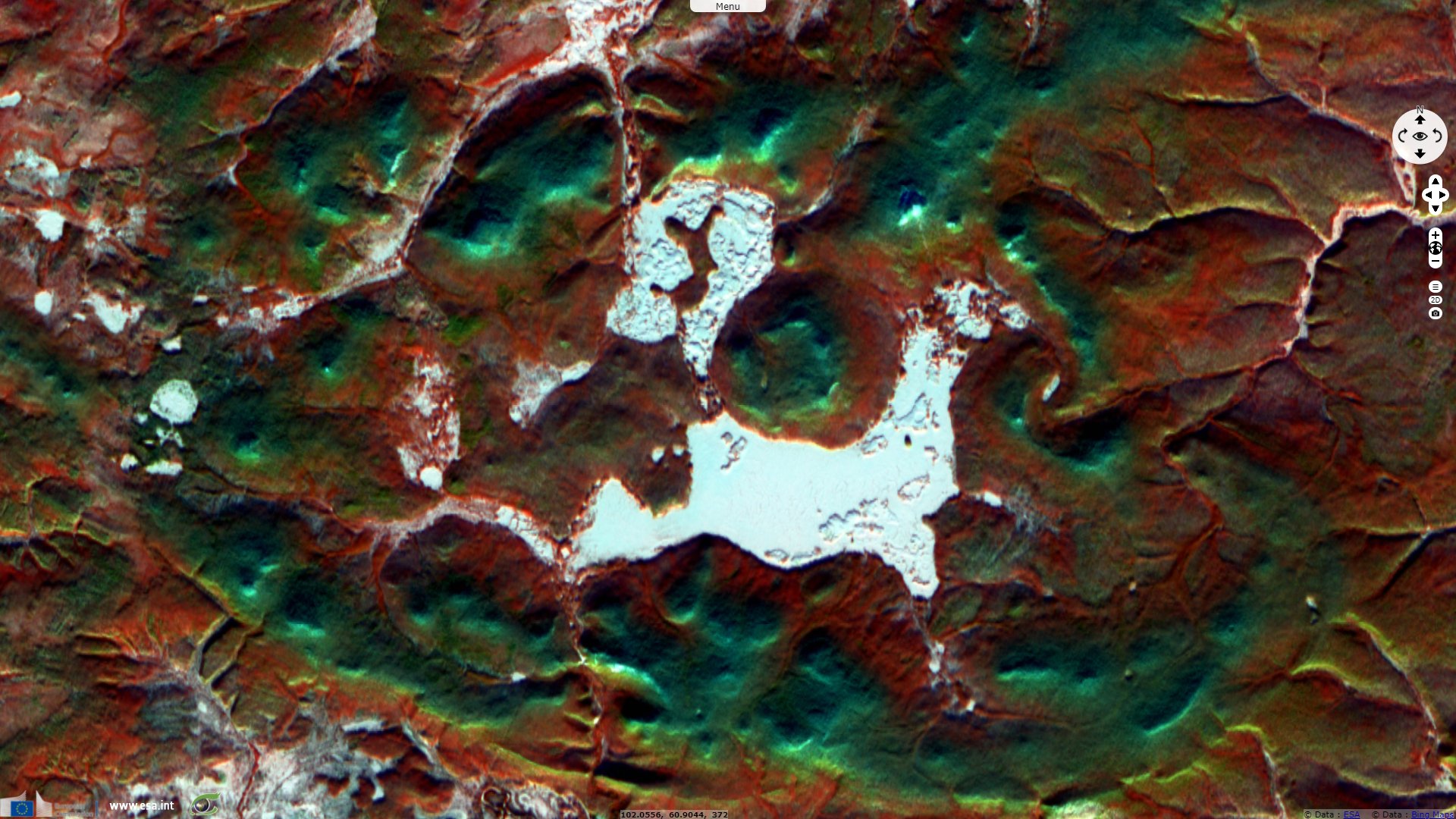 "In 1993 researchers Chris Chyba, Paul Thomas, and Kevin Zahnle studied the Siberian explosion and concluded it was of this type -- a stone meteorite that exploded in the atmosphere. This conclusion was supported when Russian researchers found tiny stoney particles embedded in the trees at the collision site, matching the composition of common stone meteorites. The original asteroid fragment may have been roughly 50-60 meters in diameter."
Fig. 12 - S2 (04.07.2019) - The tree cover has not returned to its former self after many trees of the area have fell due to the blast.
3D view 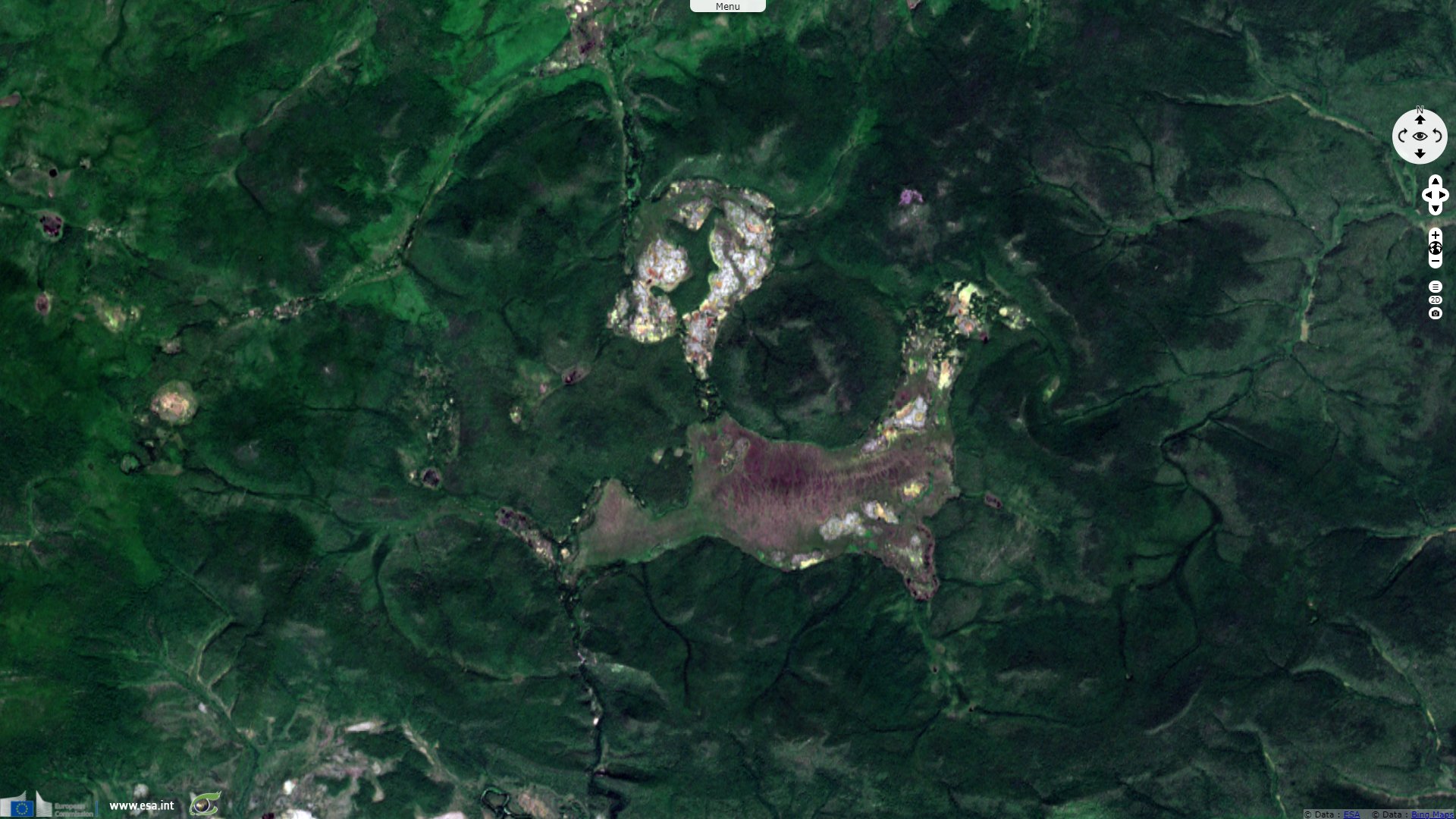 Olga Gertcyk of The Siberian Times wrote about another hypothesis: "The study by the Russian academics published in the Monthly Notices of the Royal Astronomical Society postulates that the destruction on the ground was ‘the result of a passing space body and its shock wave, rather than a direct impact’. An issue that has puzzled researchers is the cause of fires in the epicentre. The new study showed that it could be caused by the high-intensity light of the space body's head as it reached over 10,000 degrees Celsius at its lowest altitude in the Earth's atmosphere." 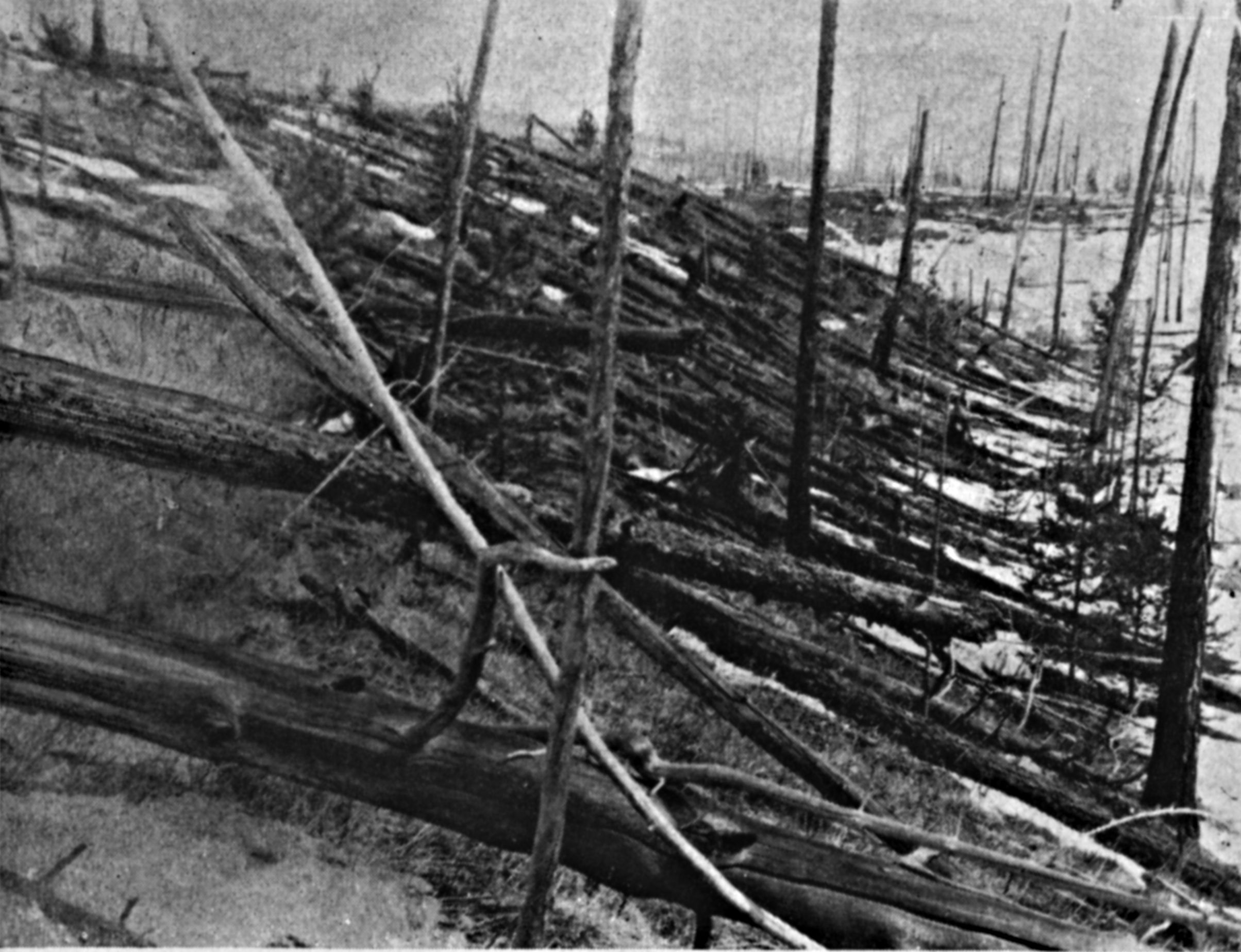 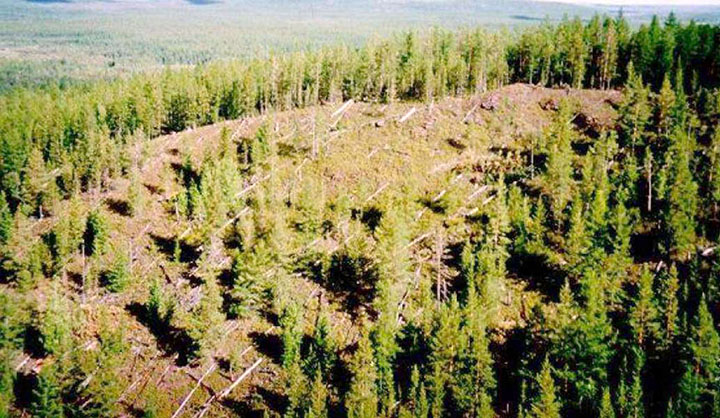 Trees knocked over by the Tunguska blast. Source: Soviet Academy of Science 1927 expedition led by Leonid Kulik.
Decades later, a more recent view of the fallen trees.
Fig. 13 - S2 (24.09.2020) - View in natural colour at the end of September.
3D view 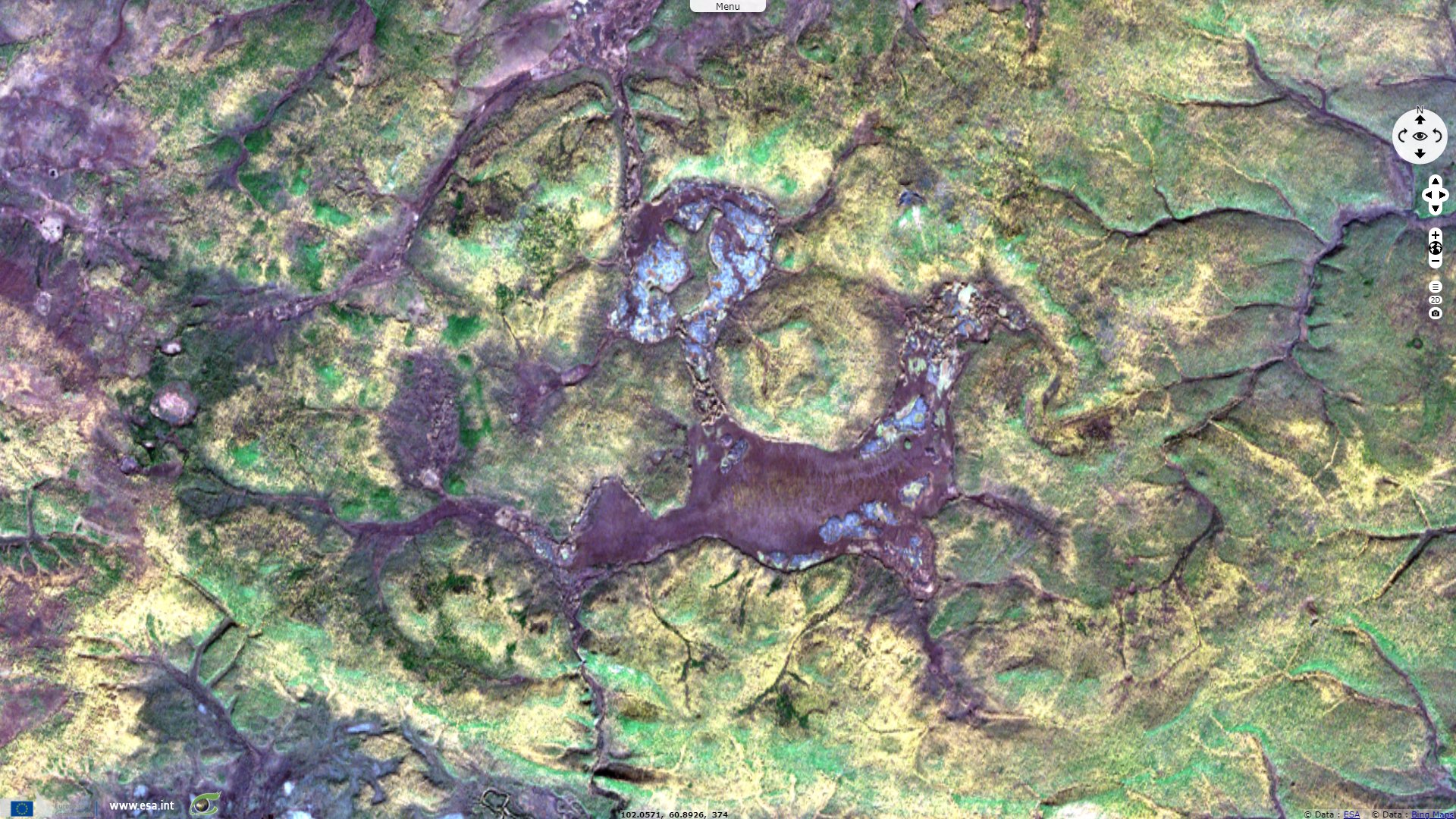 "As the team of researchers concluded in their work, ‘The absence of iron droplets around the epicentre is explained by the high velocity of the space body during through passage across the Earth’ s atmosphere – always over 11.2 km s−1 when the surface temperature exceeds several thousands of degree Celcius." "'The dominant mechanism of mass-loss at these temperatures is the sublimation of material in the form of single atoms, which can be found on the Earth’s surface as iron oxides, which do not differ from the same widespread iron oxides of terrestrial origin.’"
The views expressed herein can in no way be taken to reflect the official opinion of the European Space Agency or the European Union.
Contains modified Copernicus Sentinel data 2022, processed by VisioTerra.