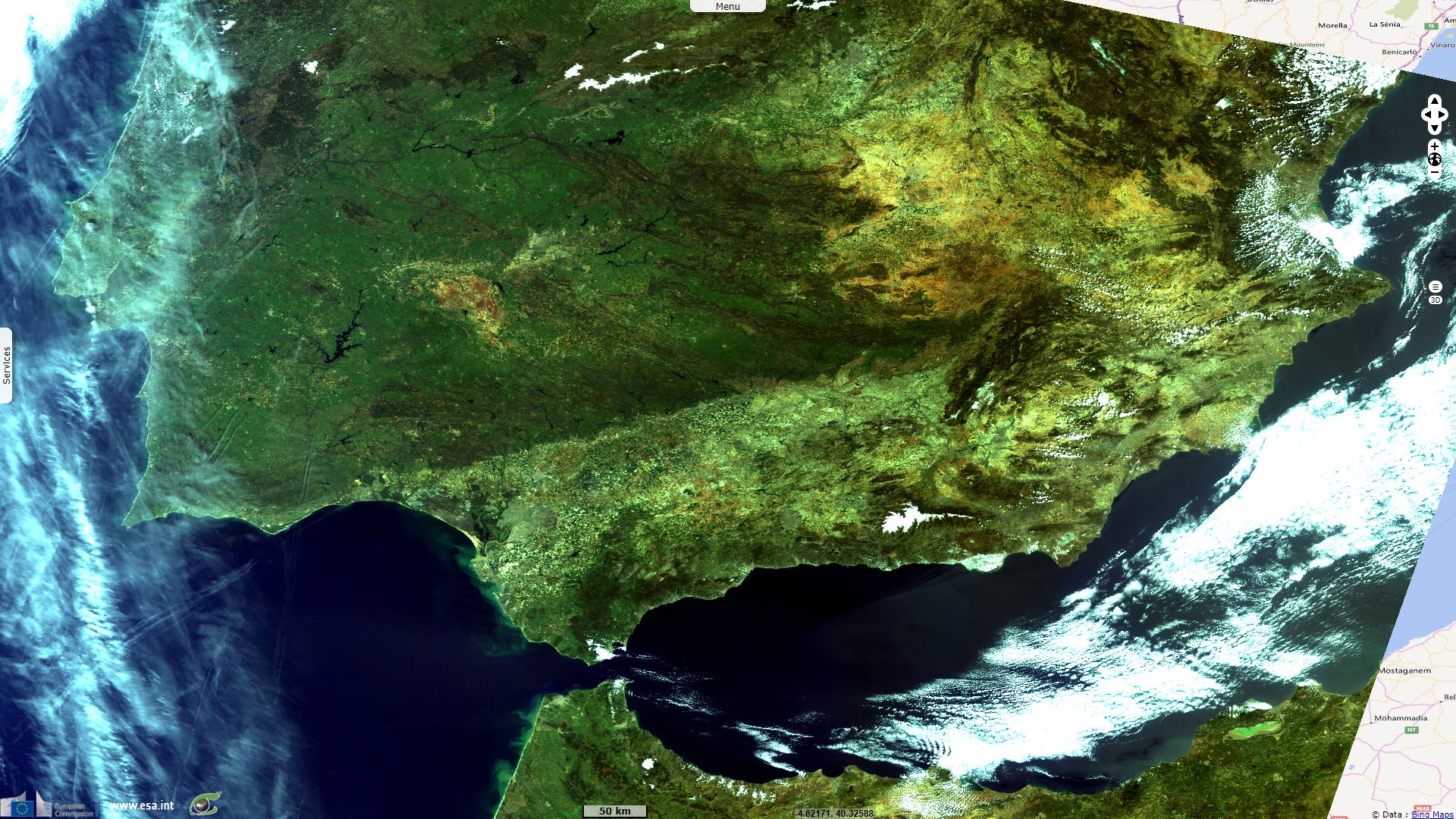 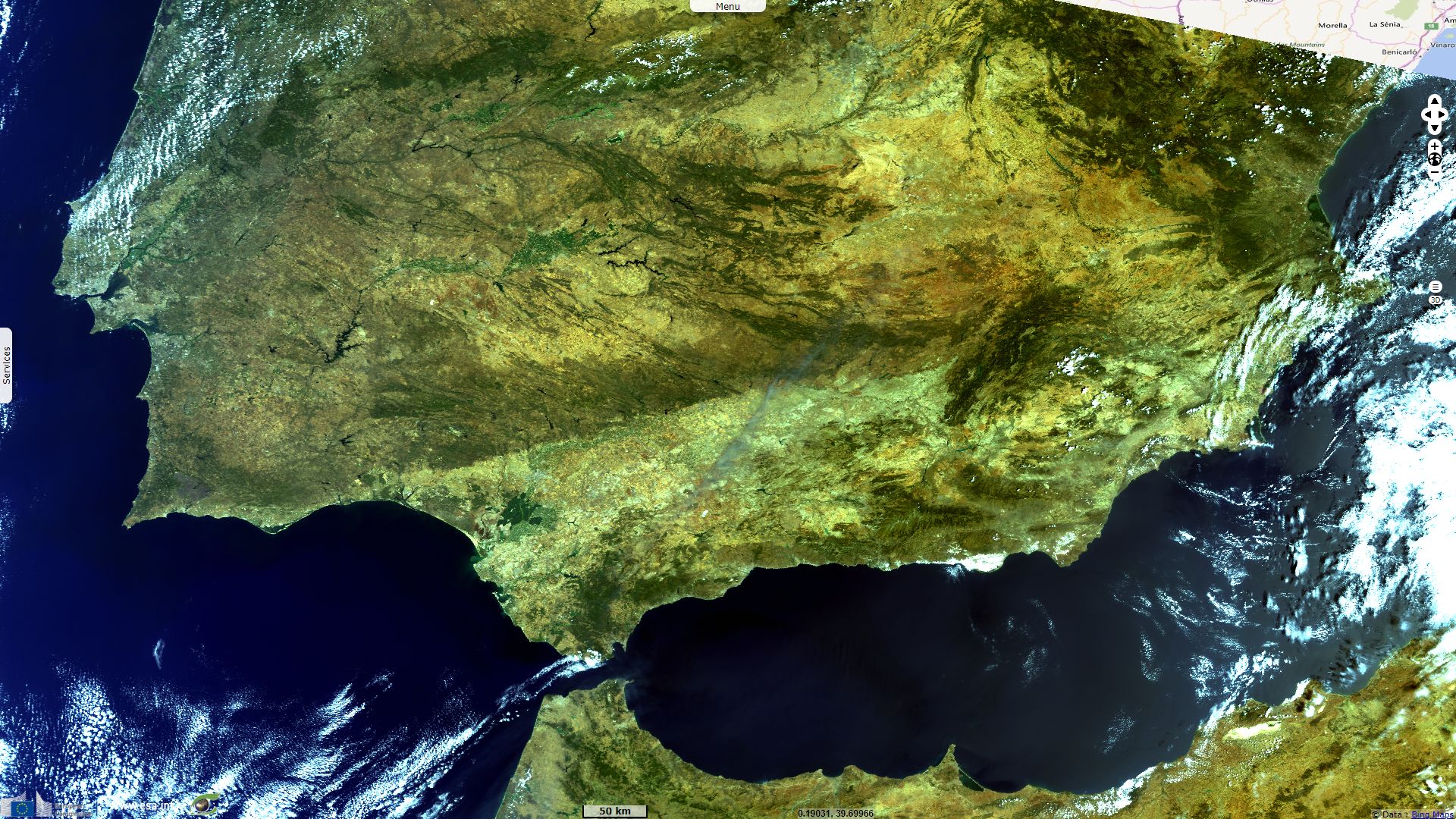 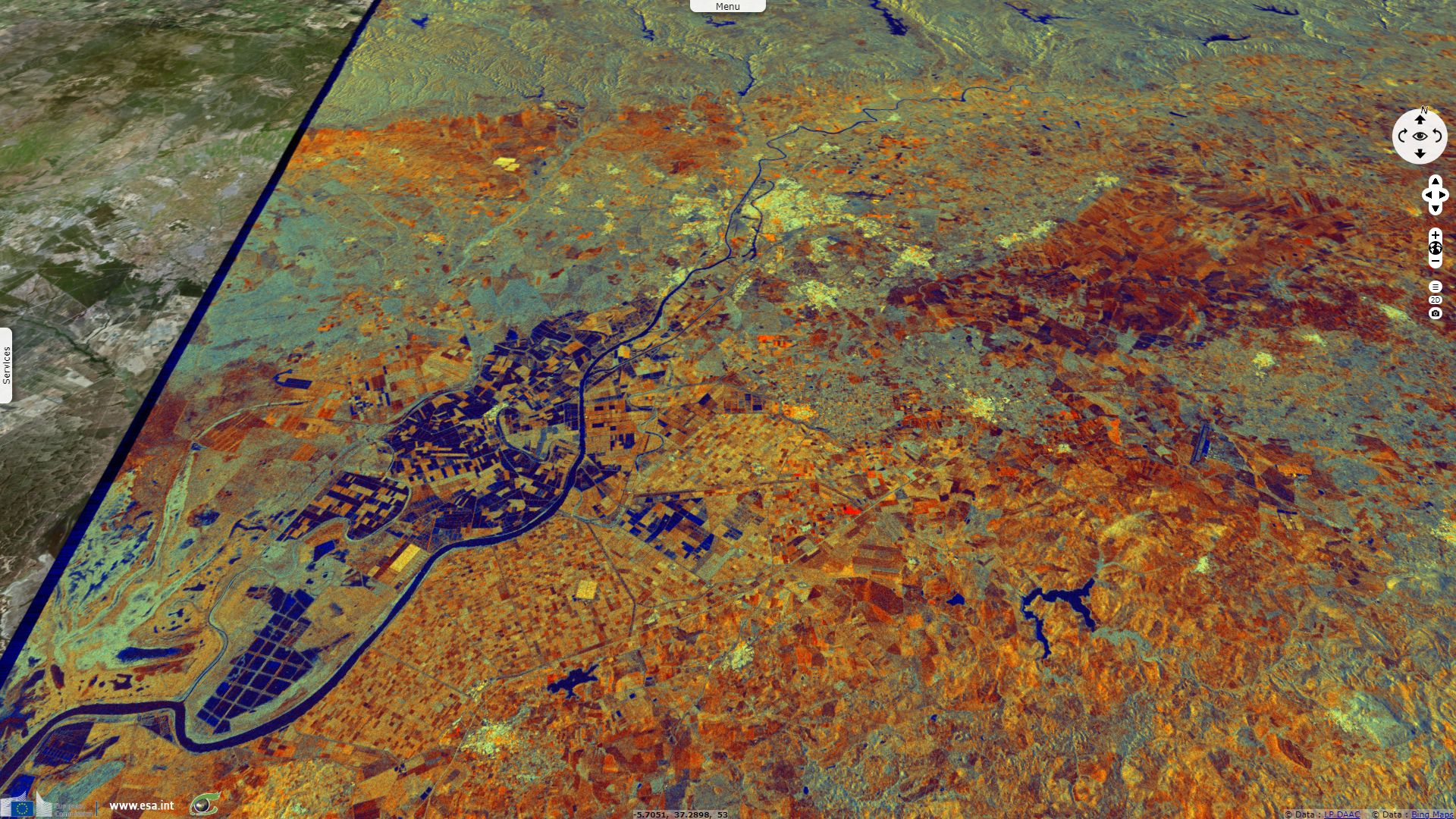 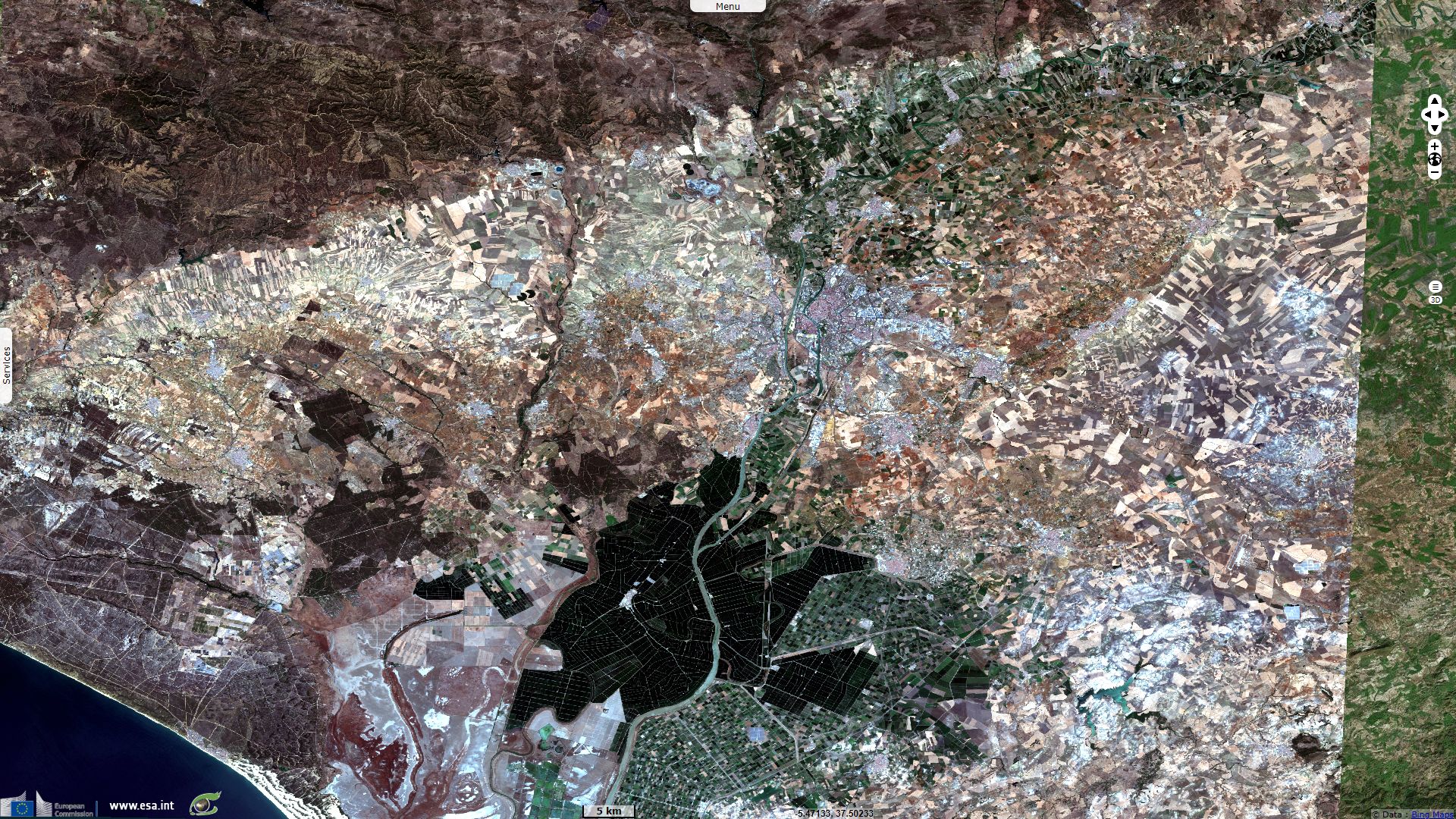 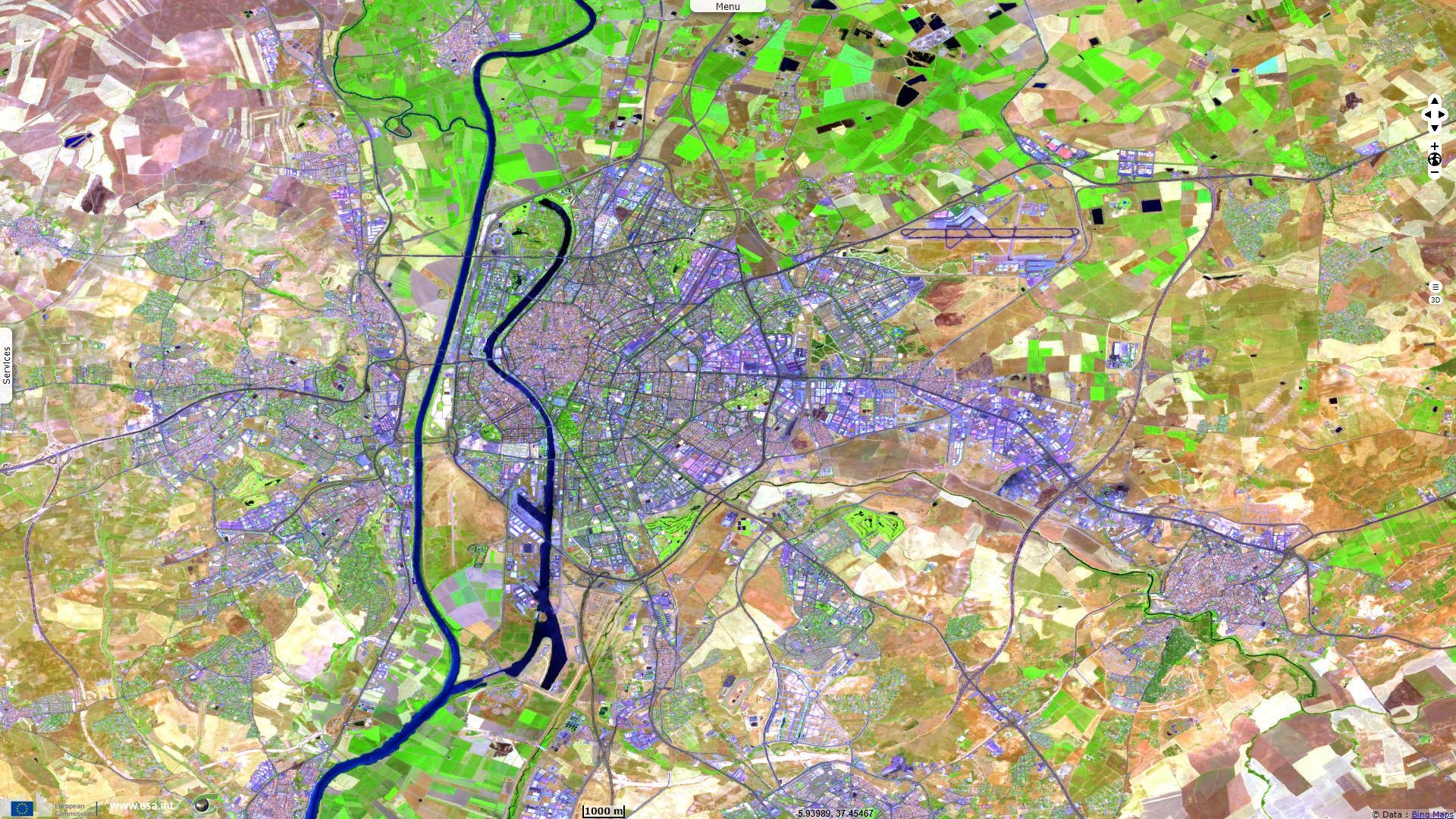 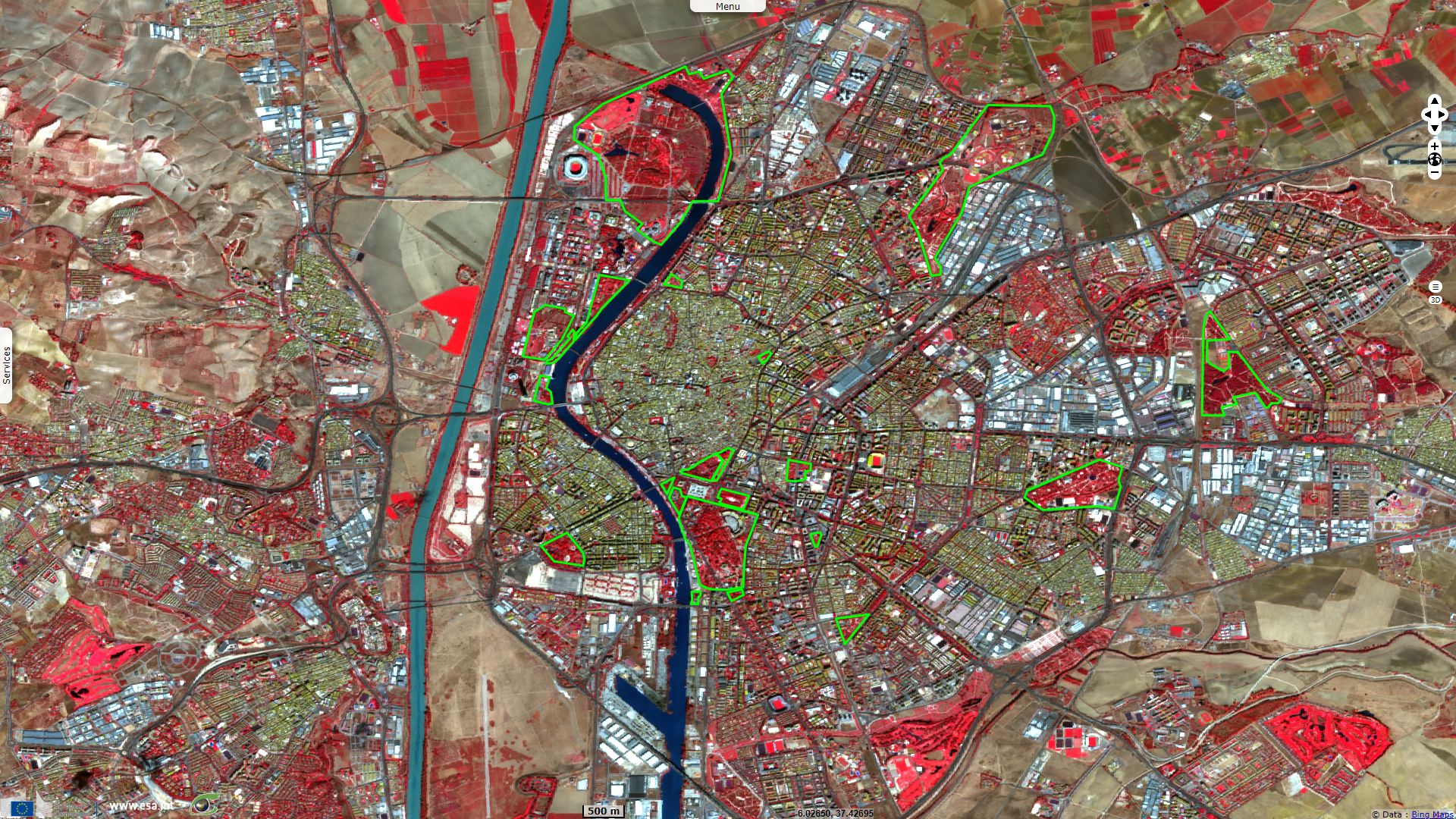 In order to provide inhabitants beautiful cooler areas during the heat of the summer, many large parks have been added to Seville. The tourist information office of Seville describes one of the largest of those, just beyond the historical centre: "Maria Luisa Park is the most famous park in Seville and one of its best sources of fresh air. Formerly the private gardens of the San Telmo Palace, the land was donated in 1893 by the Infanta Maria Luisa Fernanda de Borbón (the Duchess of Montpensier). The land was reformed by the French Engineer Jean-Claude Nicolas Forestier, conservator of the Boulogne forest in Paris, who gave it a romantic touch, inspired by the gardens of the Generalife, the Alhambra and the Alcázares of Seville. The Plaza of España and the Plaza de América were opened in the park for the Iberoamerican Expo in 1929, being some of the main attractions. Their fountains give that arabesque touch that adds sound to help you peacefully relax among its many tiled and detailed benches, which describe works of literature and other arts."
Fig. 7 - S2 (24.10.2019) - 4,3,2 natural colour - The Alcazar and the city walls are some of the remnants of the Roman and Moorish past of Seville visible from space.
2D view 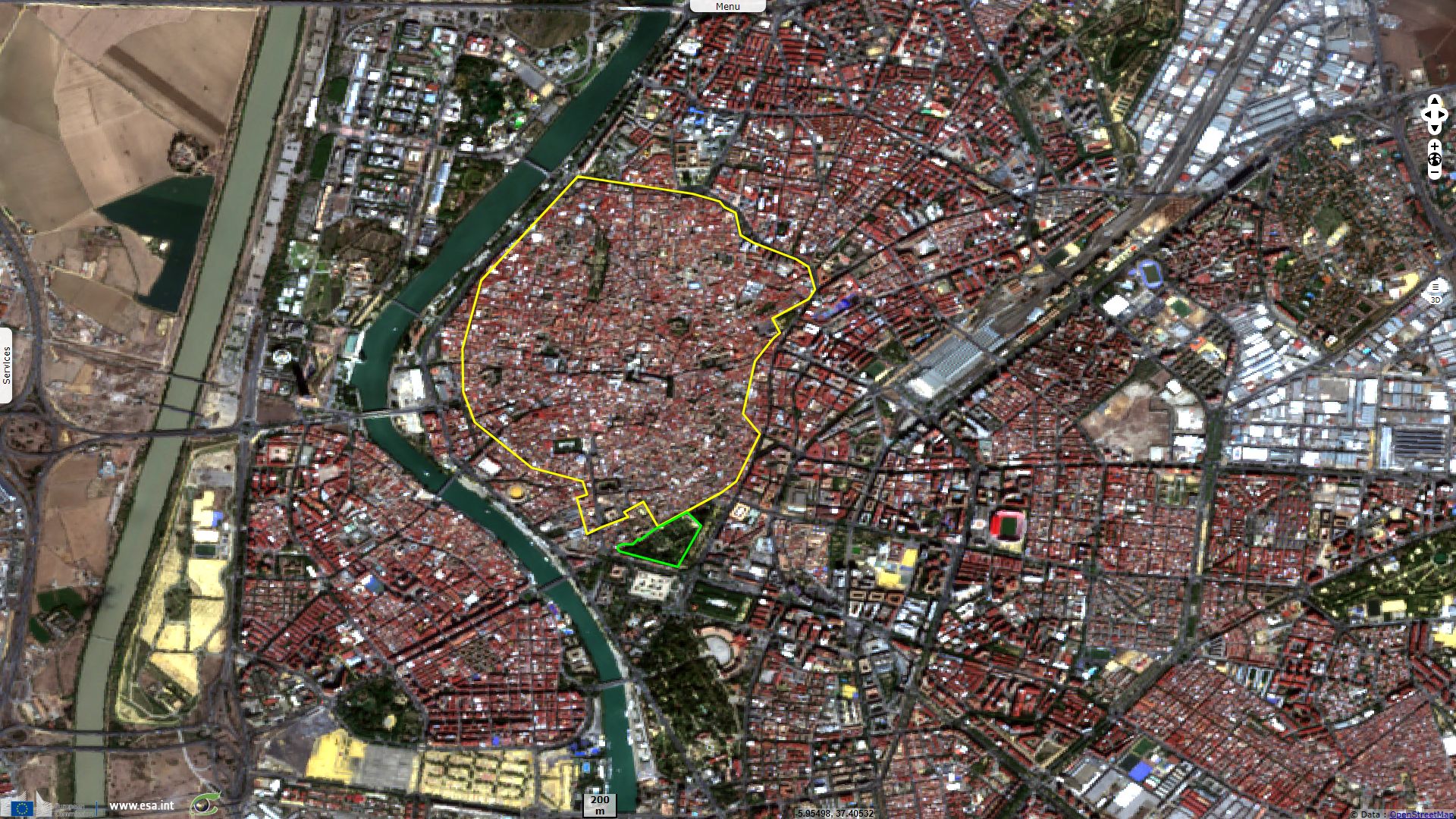 The tourist information office of Seville reminds the historical significance of Seville and its fortifications in the past and today: "Just a few metres from the Cathedral, you can see the walls behind which extend to the Real Alcazar of Seville: a palace of palaces, a truly unique complex. Since the Middle Ages, this walled enclosure has been a residence for kings of different eras, each leaving their architectural legacy. Even today, it is the official residence in Seville of the Kings of Spain, which makes this fortified space the oldest active royal palace in Europe. The proliferation of incredible details, the history that breathes through each room, its garden of dreams... All make this palatial complex an almost unreal citadel that takes you out of the present day. The world of cinema, on multiple occasions, or television, such as The Game of Thrones, have already surrendered to its charms. In 1492, a historical event that changed the course of the city of Seville took place. The Discovery of America at the hands of Christopher Columbus meant that this city enjoyed spectacular economic, social and cultural growth. Seville became the port and doorway to the New World, with urban growth that made it the most developed city of the era."
Fig. 8 - S2 (24.10.2019) - 4,3,2 natural colour - To preserve the old town skyline of Seville, Sevilla Tower (cyan) should be the only one to cast its shadow near the city centre.
2D view 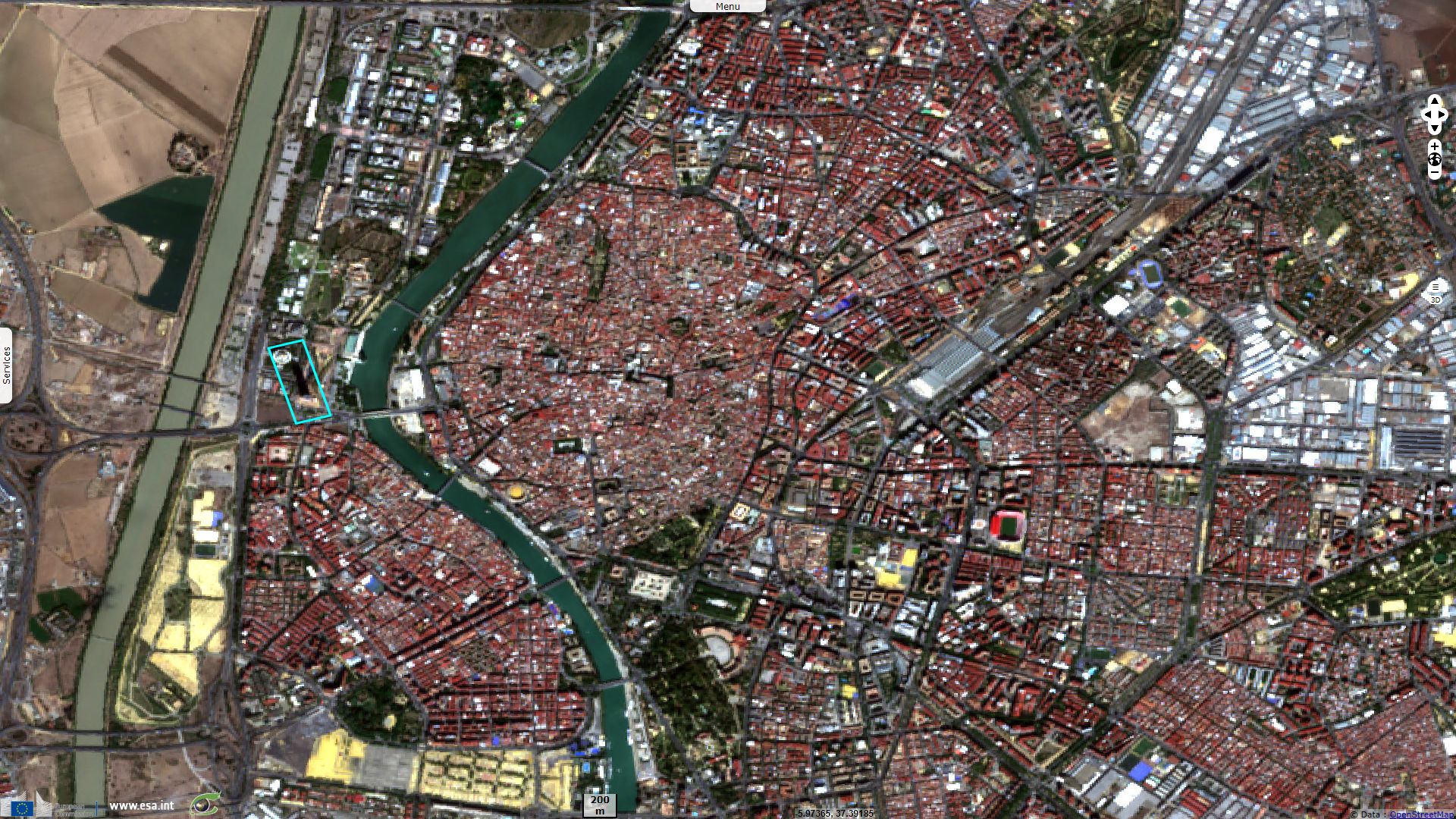 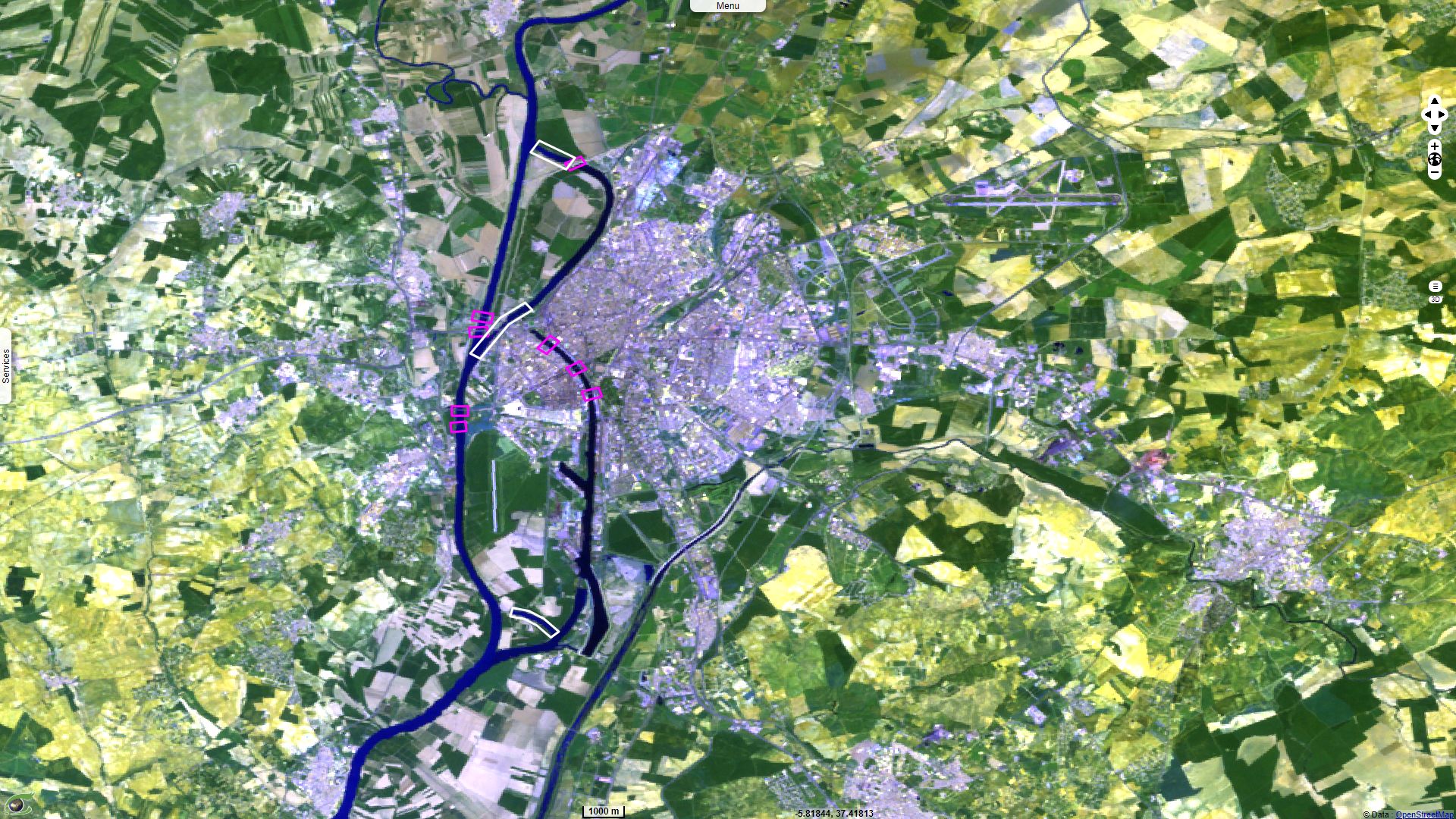 The Bureau International des Exposisions narrates how Spain became the host of the 1992 Universal Exposition: "Registered by the 93rd General Assembly of the BIE on 15 June 1983, Expo 1992 was organised to present the new positioning of Spain. As soon as Juan Carlos I ascended the throne after General Franco's death, he announced the country would host a World Expo. Sixteen years later, with Expo in Seville, the country was able to exhibit its cultural diversity through the pavilions of the Autonomous Regions and to ensure its position in Europe and on the international stage, in part thanks to the presence of the European Community Pavilion located on the 'Avenue of Europe'."
Fig. 10 - L5 (11.05.1992) - 7,5,1 colour composite - New roads & bridges (yellow) and high speed railways (blue) were built for Seville Expo '92, a new river path was opened (red).   2D view 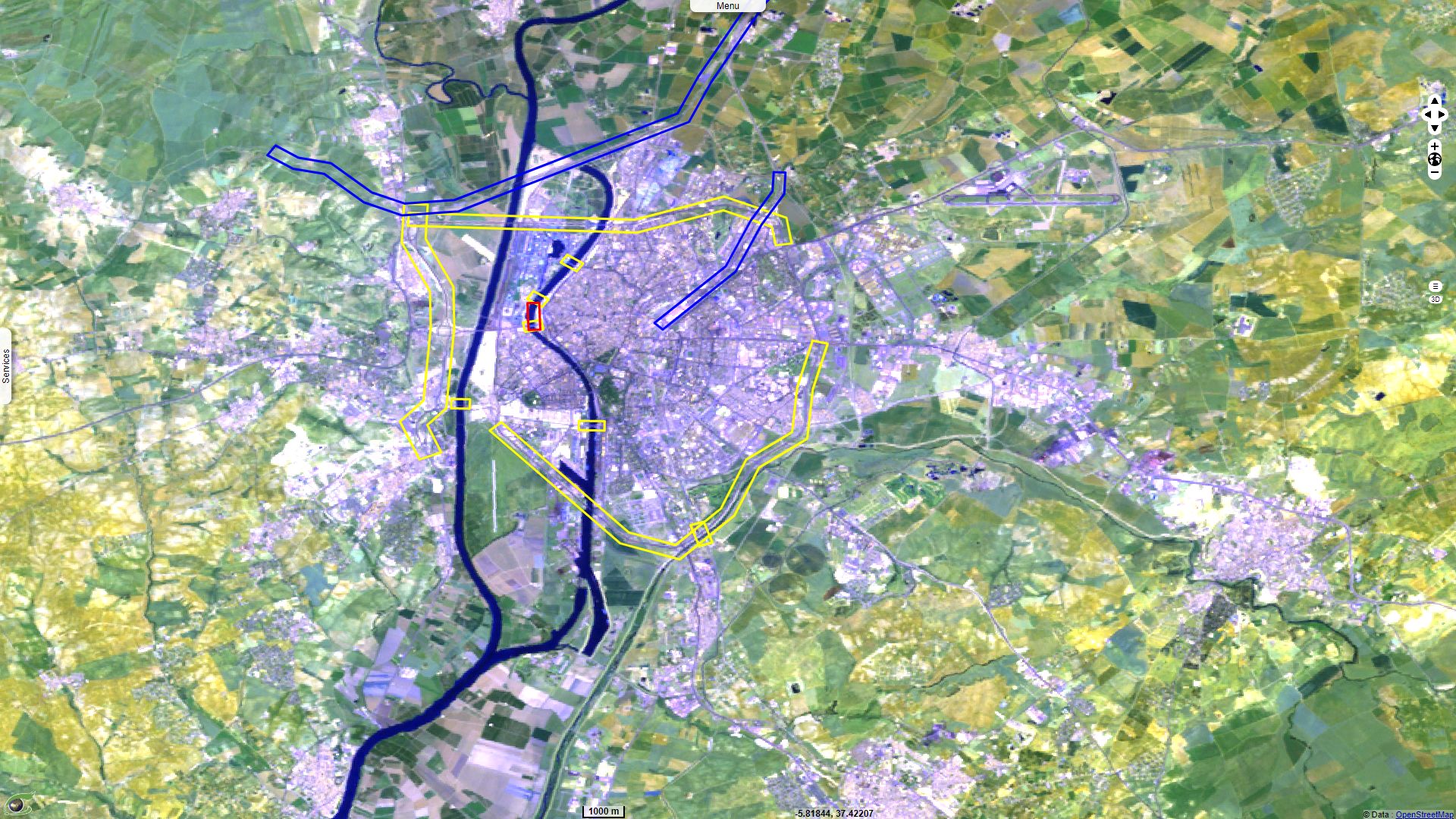 "The theme of the Expo was 'The Age of discovery' to celebrate the 500th anniversary of the discovery of the Americas by Christopher Columbus. The Isla de la Cartuja, where the explorer is said to have lived before his journey, was chosen to host the Expo." "The historical Puerto de las Indias, entryway to the Expo site and the monastery of La Cartuja were both included in the event along the main avenue of the Expo: the Road of the Discoveries. The avenue was composed of 10 thematic pavilions that embarked visitors on a journey through time where they could witness the evolution of science, technology and culture over 500 years. Among other attractions, they were able to board a XVth century caravel before hopping on a spaceship."
Fig. 11 - L5 (14.07.1992) - 3,2,1 natural colour - Celebrating the 5th centenary of the Discovery of the Americas, Universal Expo '92 was held on la Cartuja (red) with its brand new park.   2D view 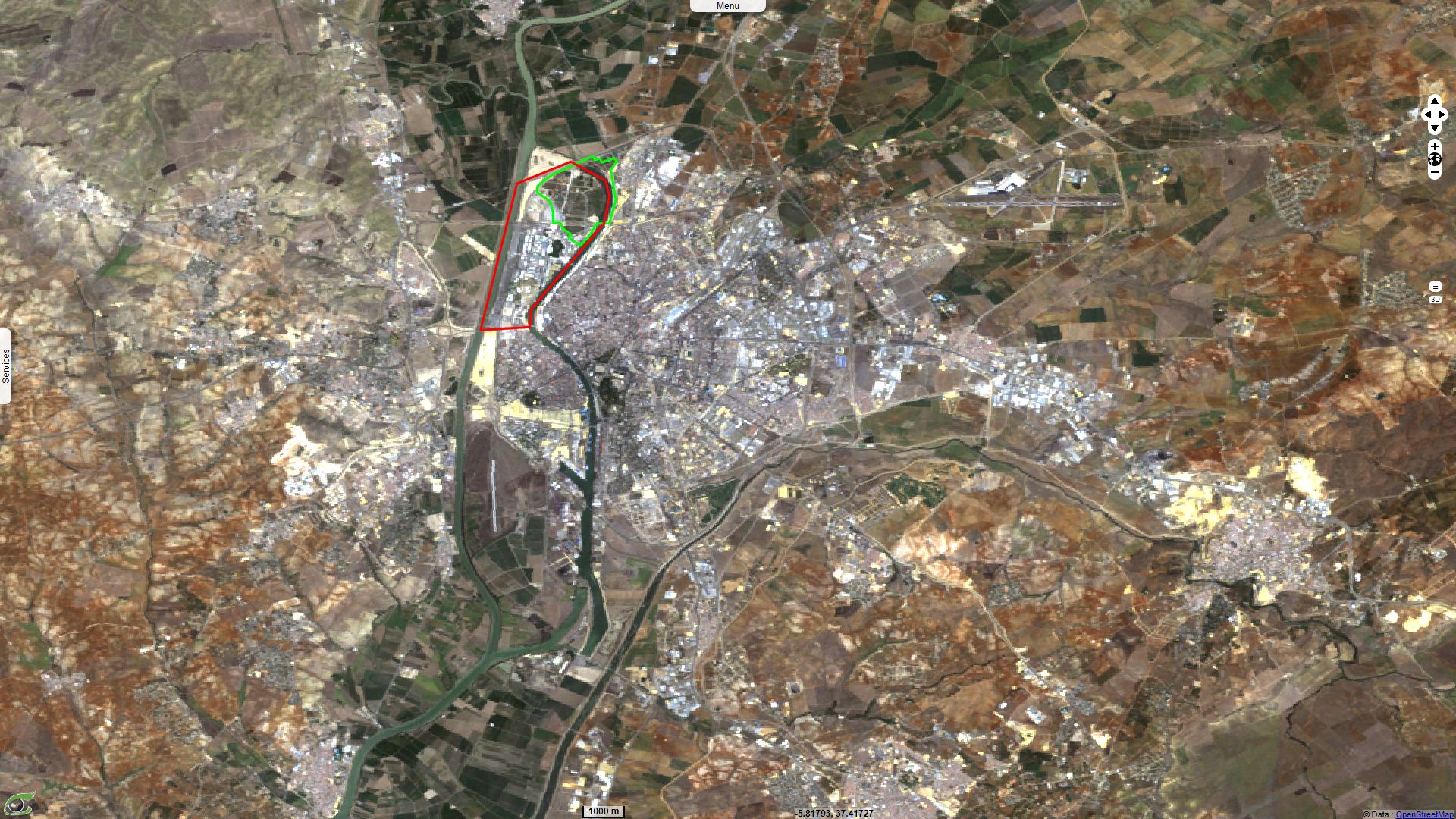 "The Cartuja Island, once the Expo ended, became Cartuja 93, a technical and economic development center. Several pavilions were kept, such as the Puerto Rican pavilion, and turned into offices. Additionally, an amusement park was created near the Lake of Spain." "The city of Seville benefited greatly from the works done to ensure a high-quality Expo. The airport built a new terminal; a more functional train station replaced the two stations of the city; a new high-speed line was created to link Seville to Madrid; highways were built and the Barqueta, Alamillo, Cartuja and El Cachorro bridges were erected to facilitate the access to the Expo site. The Expo had a very positive impact on the image of Andalusia as it allowed the region to showcase its organisational and logistical skills."
Fig. 12 - Landsat-5 (06.02.2010) - 3,2,1 natural colour - Being a flat city, Seville (here during the flood of winter 2009-10) used to be vulnerable of the Guadalquivir's frequent overflow.   2D view 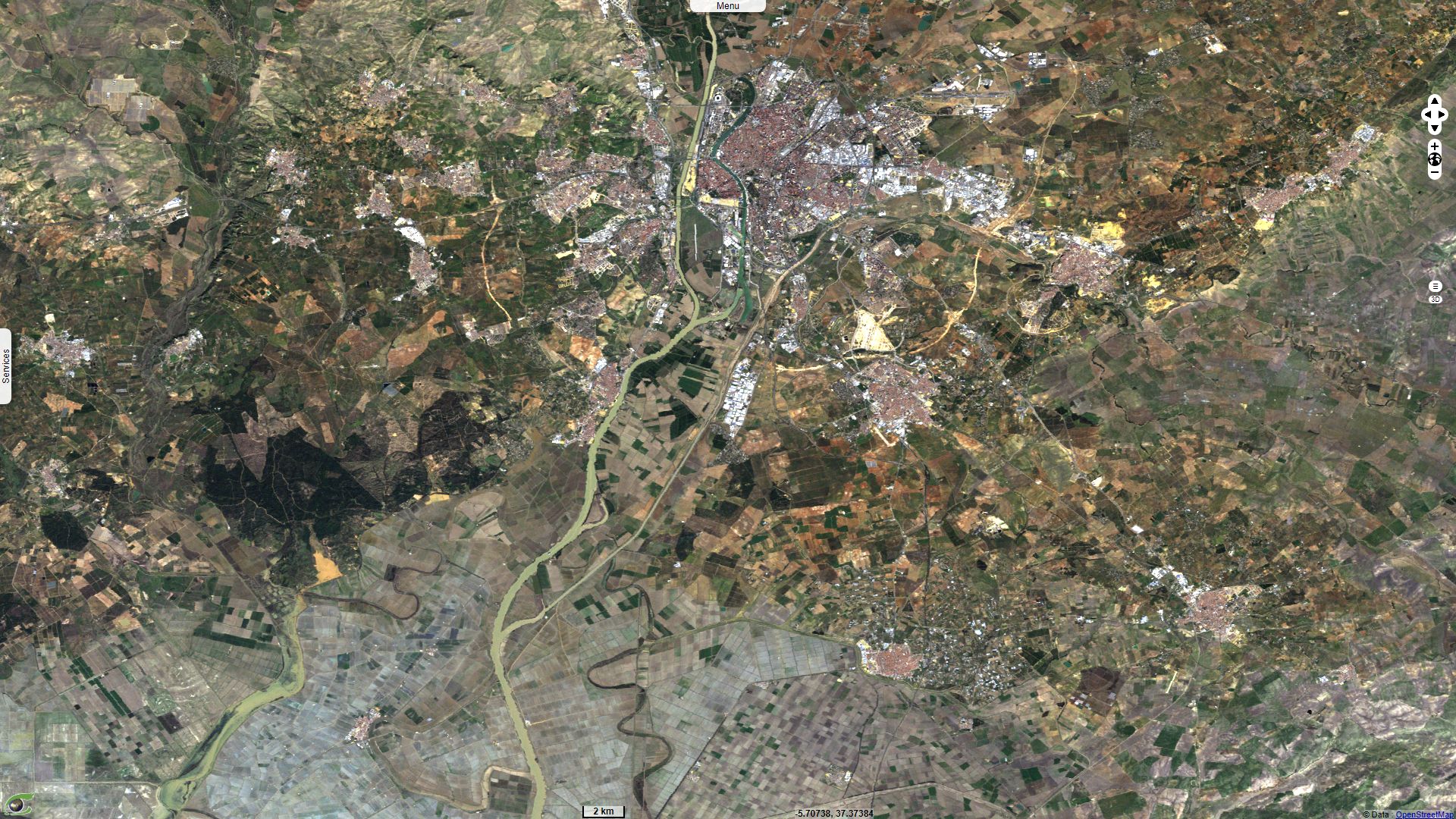 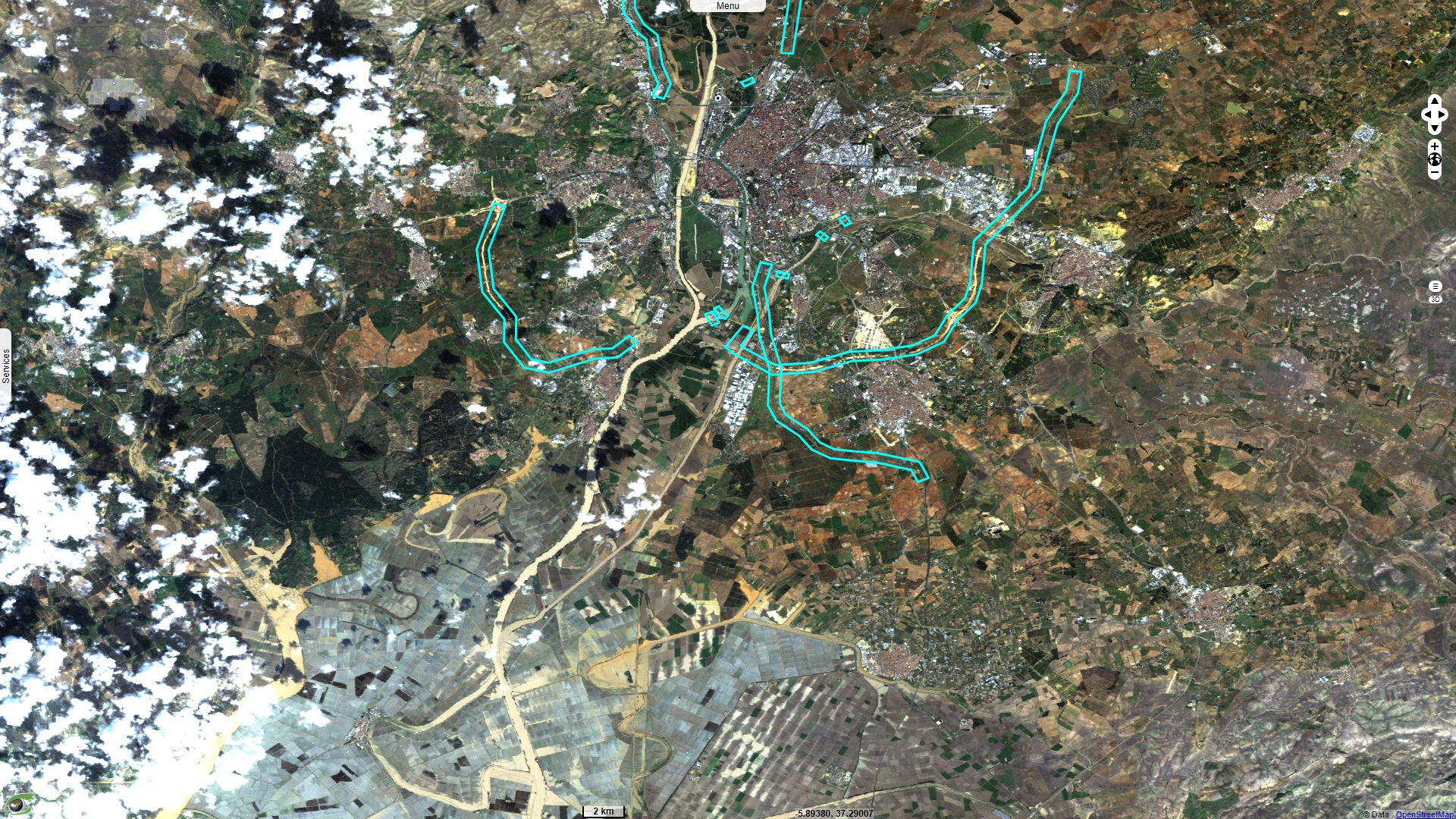