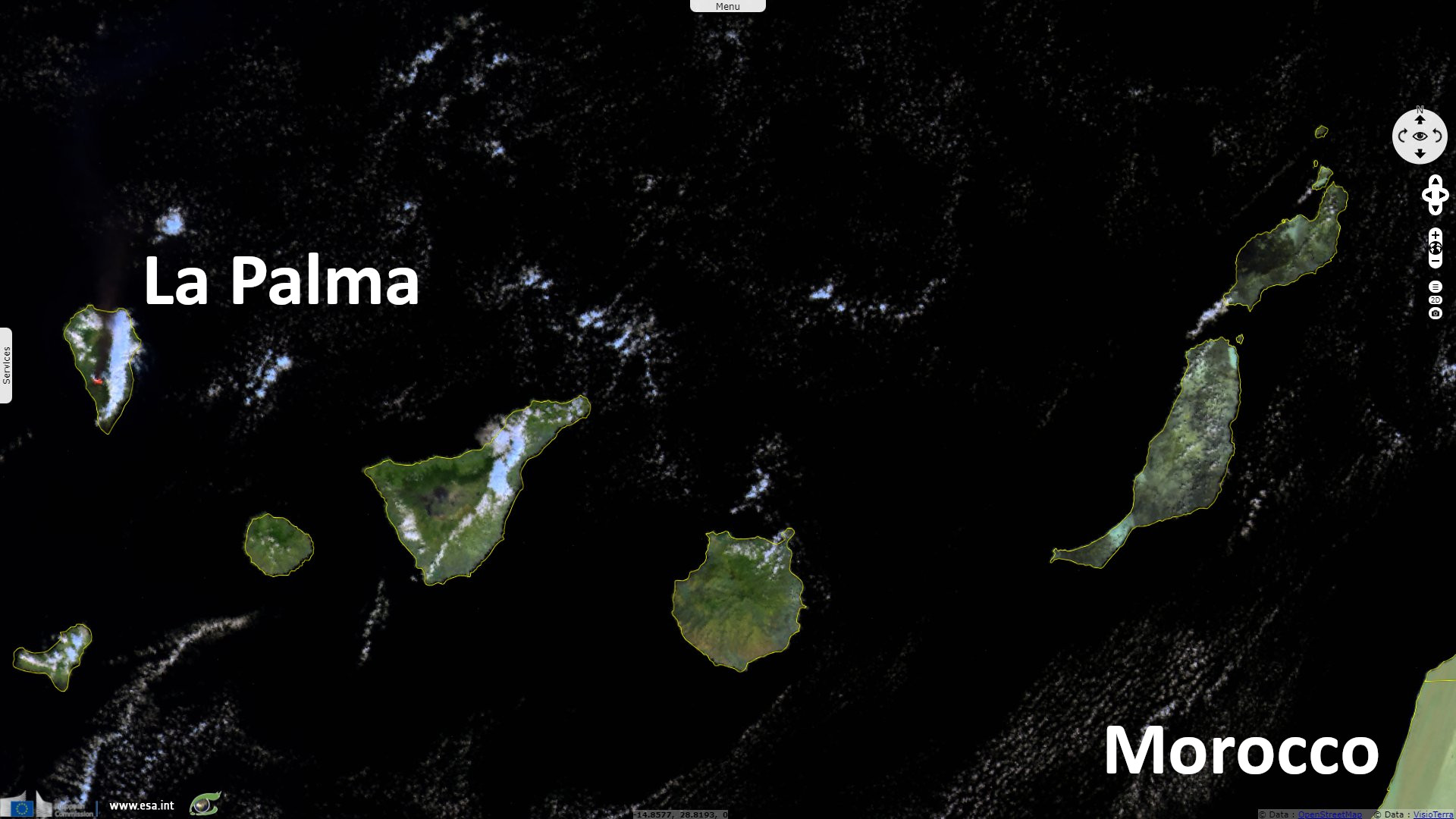 The journalist Guillermo Vega relates in the Spanish paper El Pais: "The new volcano in Cumbre Vieja natural park, located on the Spanish Canary Island of La Palma, continued to increase its eruptive force on Friday. Sources from the Spanish Geological and Mining Institute (IGME) said today that two new lava flows had emerged from a third vent that appeared during the night. These two rivers of molten rock have appeared around 400 meters from the crater, and are very liquid, according to the National Geographic Institute (IGN)." "At a press conference on Friday, the regional leader of the Canary Islands, Ángel Victor Torres said that the volcano had released 80 million cubic meters of lava. This is approximately double the amount that was released during the eruption of Teneguía volcano in 1971 – the last to hit La Palma – in one-third of the time." "On Thursday, María José Blanco, a volcanologist from the IGN, said that the volcano at Cumbre Vieja had not only maintained the same explosive force after the lava reached the sea, but had also increased its activity. The Volcano Risk Prevention Plan (Pevolca) found that there was no evidence that 'the dynamic eruptive process was stable,' and as such, the land and maritime exclusion zone has remained in place."
Fig. 2 - S5P TROPOMI - Sulfur dioxyde column (log) - red: 24.09.2021, green: 25.09.2021, red: 26.09.2021 - Traces of SO2 reached Morocco & mainland Spain.
3D view 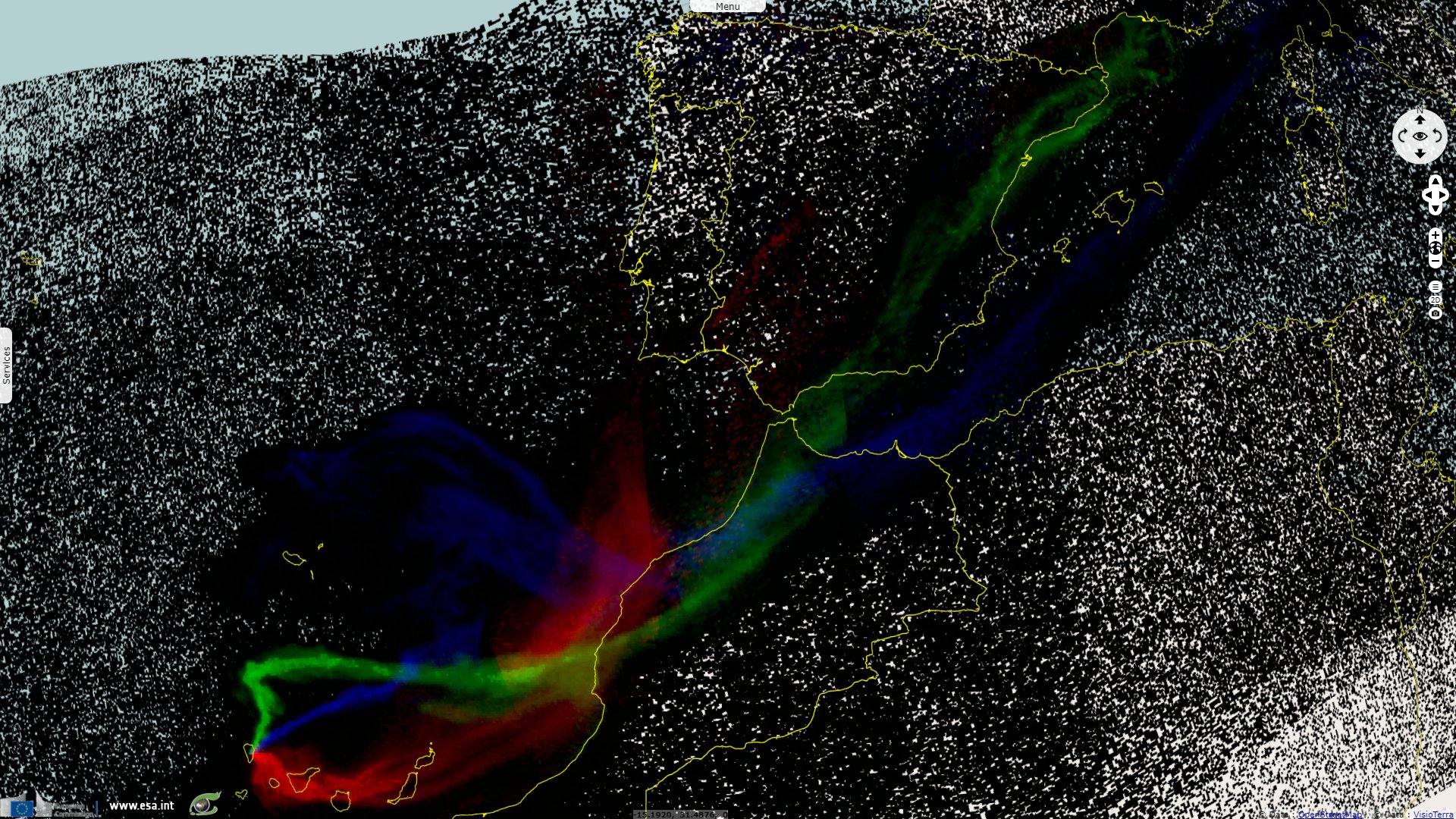 Smithsonian Institution details: "IGN noted that seismicity intensified during the morning of 19 September, with earthquakes located at 0-6 km depth; a M 4.2 event was recorded at 11:16 and vertical deformation increased. Authorities evacuated about 50 residents with reduced mobility and their companions from Las Manchas de Abajo, Jedey, San Nicolás and El Paraíso (El Paso and Los Llanos de Aridane), El Charco (Fuencaliente), La Bombilla (Los Llanos de Aridane and Tazacorte), and El Remo and Puerto Naos (Los Llanos de Aridane). Residents in an area prone to landslides were also evacuated. Other preparations continued at the hospital, in neighborhoods, and at evacuation centers."
Fig. 3 - S1 (10.09.2021) - At left, Caldera de Taburiente on La Palma forms a bowl opened at S-W. It is an evidence of the Canaries hotspot.
3D view 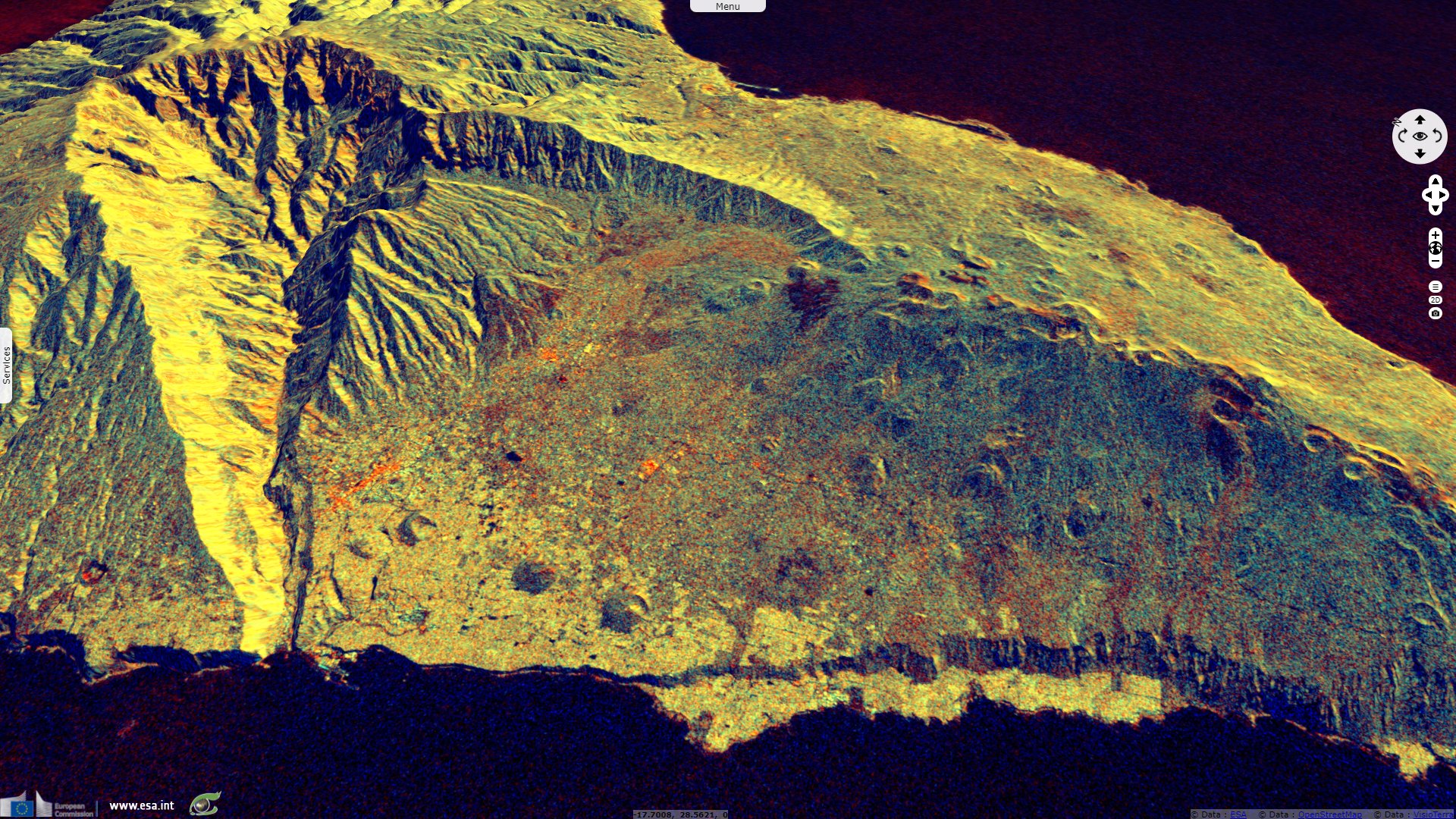 "At 15:10 on 19 September an eruption began in the area of Cabeza de Vaca, in the municipality of El Paso. Observers near the eruption site observed a large explosion that ejected material and produced a gas-and-ash plume; volcanic tremor was recorded by the seismic network. Two 200-m-long fissures aligned N-S opened about 200 m apart. INVOLCAN scientists observed seven vents along the fissures during the initial stage of the eruption. Multiple tall lava fountains fed flows downslope to the west, igniting forest fires. Photos and video posted by IGN showed multiple pulsating fountains fanning out from parts of the fissure. Ash plumes rose about 1.5 km and gas plumes rose 3 km and drifted ESE."
Fig. 4 - S2 (26.08.2021) - An alignment of vents is visible on the ridge southward of the caldera from which old lava flows run toward west.
3D view 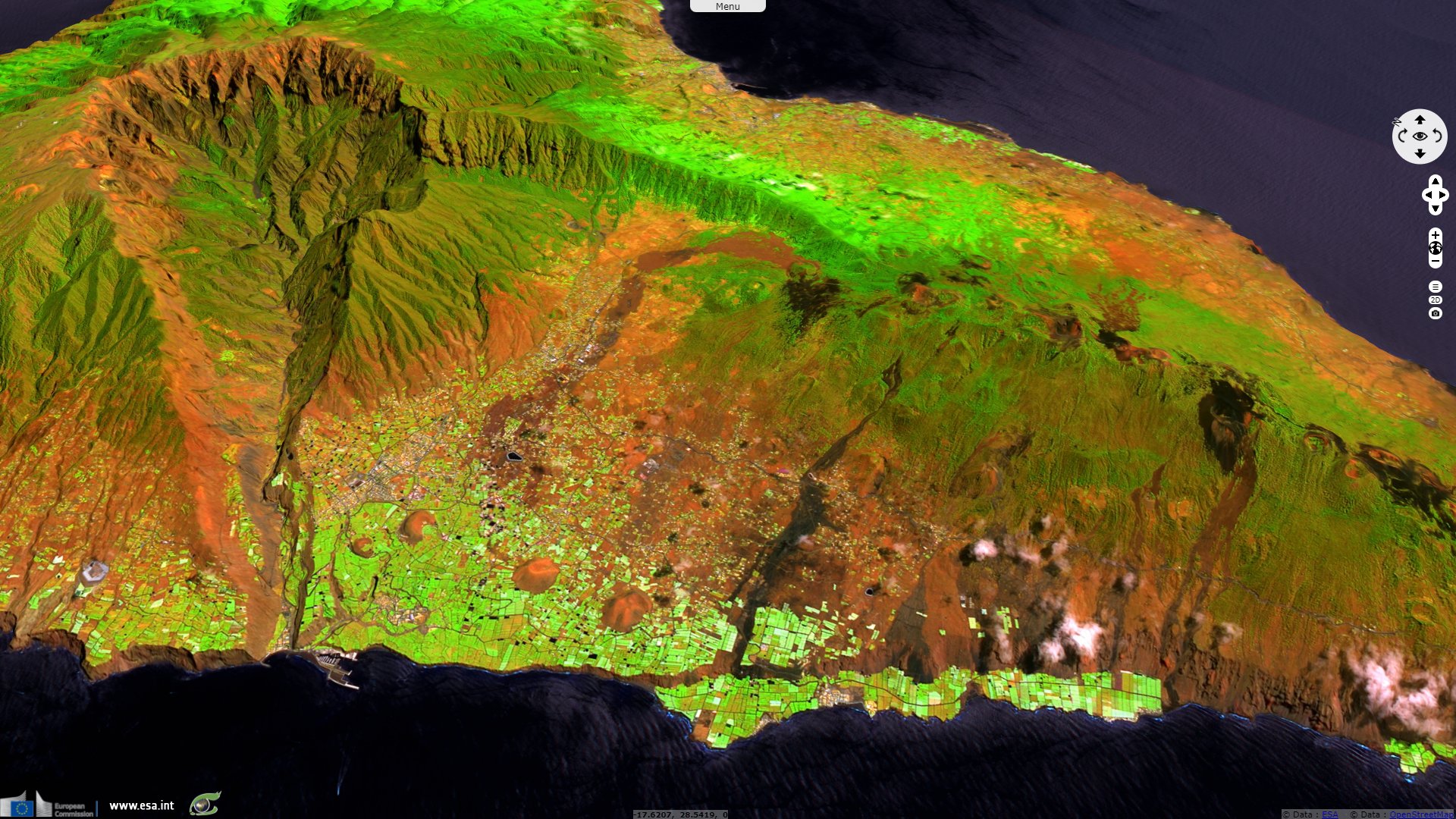 "The PEVOLCA steering committee briefly raised the Alert Level to Orange, and then to Red (the highest level on a four-color scale) by 17:00 for high-risk municipalities directly affected by the eruption. About 5500 people evacuated with no injuries reported, and authorities recommended that residents stay at least 2 km from the vents. The La Palma airport briefly closed, livestock were evacuated, and education centers were closed along with sections of multiple highways. Later that day INVOLCAN scientists who measured an area of the flows determined an average flow rate of 700 m per hour and temperatures around 1075°C. By the next day a main cone had formed."
Fig. 5 - S1 (10.09.2021) - Cities El Paso, Los Llanos de Aridane and Tazacorte are located between the ridge and the ocean.
3D view 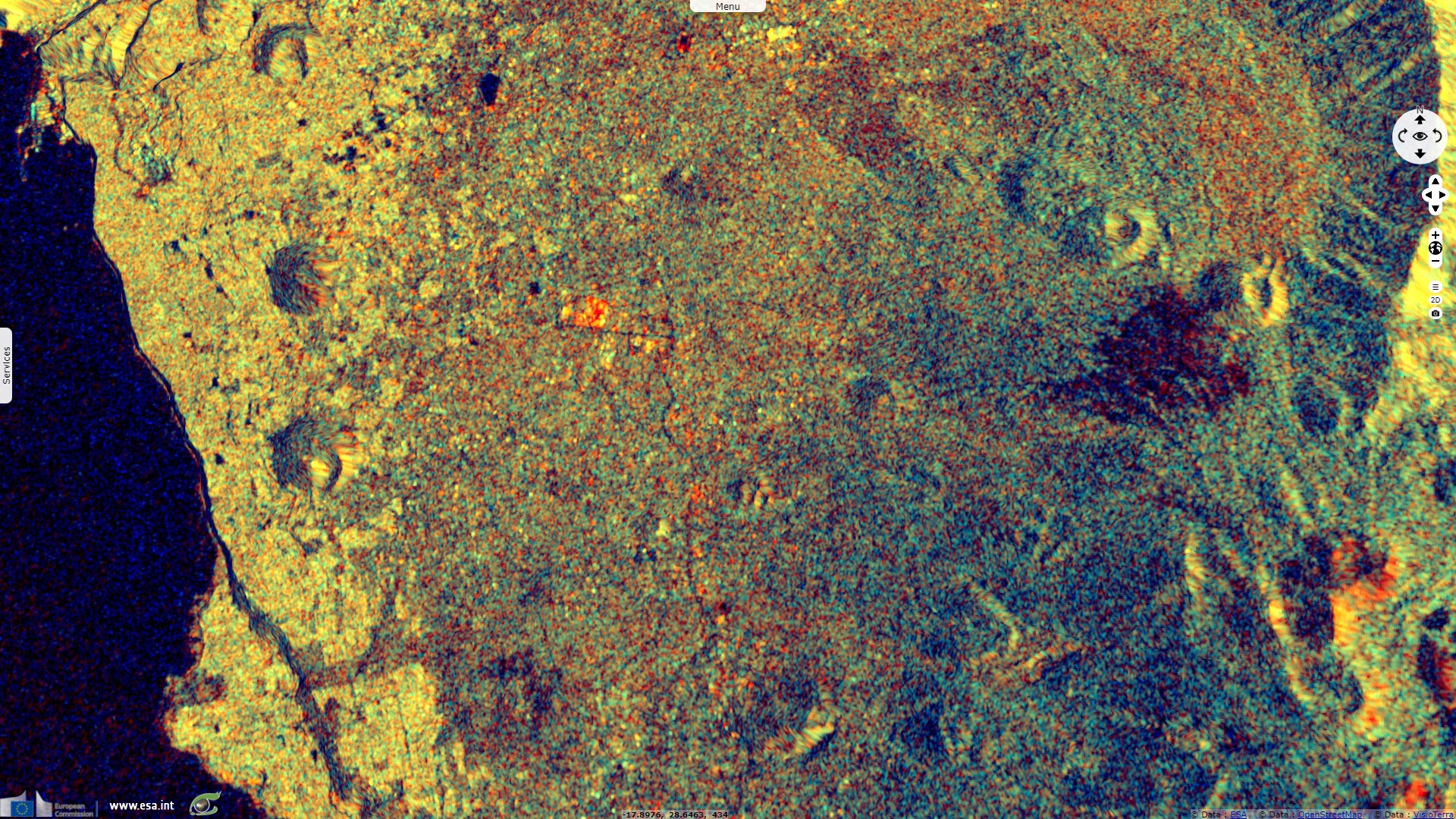 "The sulfur dioxide gas emission rate was 6 000-11 500 tons per day during 19-20 September. Satellite data showed a plume of sulfur dioxide drifting 475 km SE and reaching the coastline of Africa by 20 September. A map produced on 20 September by IGN in partnership with Copernicus Emergency Management Service (EMS) showed that the main part of the lava flow had traveled more than 3 km west and another branch extended about 1.5 km WSW. The flows had covered about 1 km² and destroyed an estimated 166 buildings. Activity was concentrated at four main vents, the last (and ninth) of which opened at 19:56 on 20 September about 900 m from the main vents. Strong lava fountaining continued during 20-21 September and ash fell in the vicinity of the vents. Ash plumes rose 2.4-4.6 km a.s.l. and drifted as far as 55 km SW and south according to the Toulouse VAAC. Sulfur dioxide gas plumes drifted west and east at an altitude of 3 km a.s.l. By 08:14 on 21 September an updated Copernicus EMS map showed that 350 homes had been covered by lava and the flow field had expanded to 1.54 km². According to a news report lava up to 12 m thick was advancing at a rate of 200 m per hour. A few hundred more residents evacuated as lava advanced towards Tacande; bringing the number of evacuees to about 5700. The south lava branch was advancing slowly, at a rate of 2 m per hour. Later that day INVOLCAN stated that increased volcanic tremor amplitude reflected greater intensity of Strombolian explosions at the vents."
Fig. 6 - S1 (04.10.2021) - A new vent has appeared, surrounded by ash (darker area); lava flows down from here to the sea.
3D animation 3D view 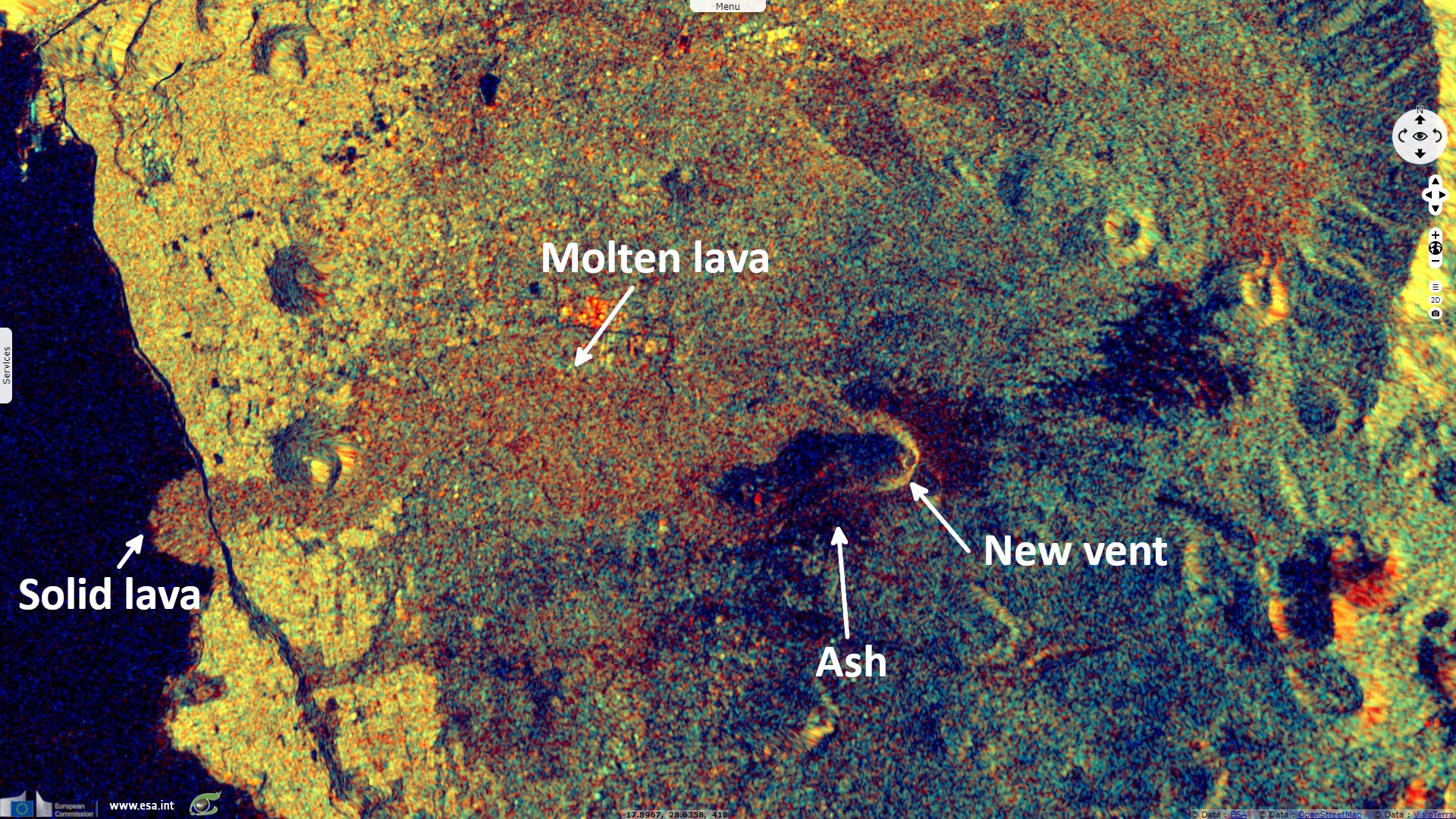 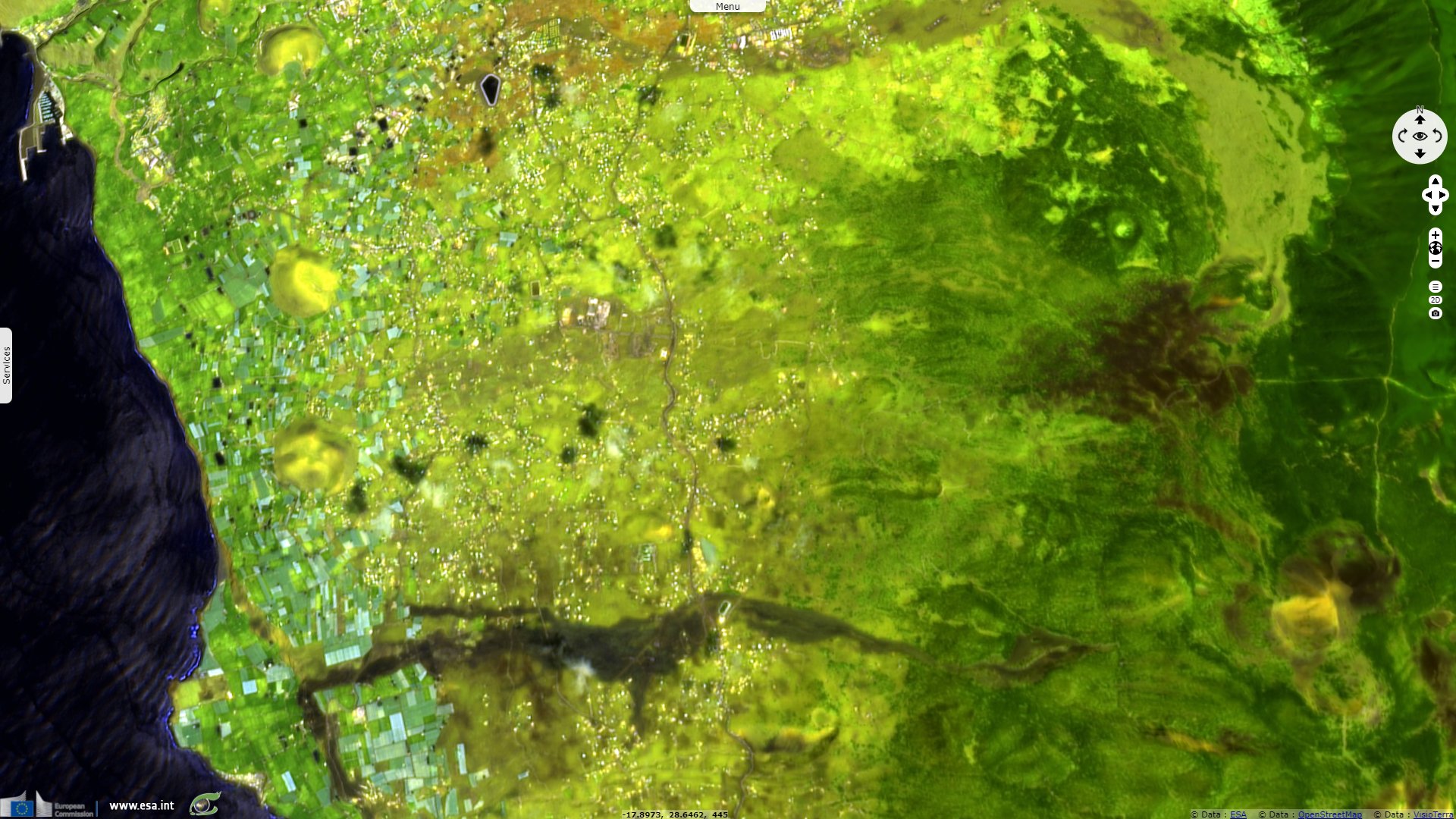 "Ash emissions significantly increased on 23 September with plumes rising as high as 5 km a.s.l. A series of powerful explosions began at 17:20 and shock waves could be seen propagating through the emission plumes. Vigorous lava fountaining was continuous. Volcanic tremor amplitude was high and variable, peaking at 15:00 on 24 September with the highest values since the eruption started. The peak occurred just before two new vents opened on the flank of the main cone, and then notably decreased afterwards, but remained at high levels. Lava from the new vents rapidly traveled more than 1 km downslope, covering older flows, before slowing to 60-80 meters per hour. The explosions ejected tephra outside of the exclusion zone. An evacuation order was issued in the early afternoon for Tajuya, Tacande de Abajo, and part of Tacande de Arriba, affecting 300-400 people. Three airlines suspended flights to La Palma. The lava flow field had expanded to 1.9 km², destroyed more than 420 buildings, and covered 15.2 km of roads."
Fig. 8 - L8 (26.09.2021) - Pansharpened view of the lava flow halfway to the ocean. Heavy smoke rises from the source.
3D view 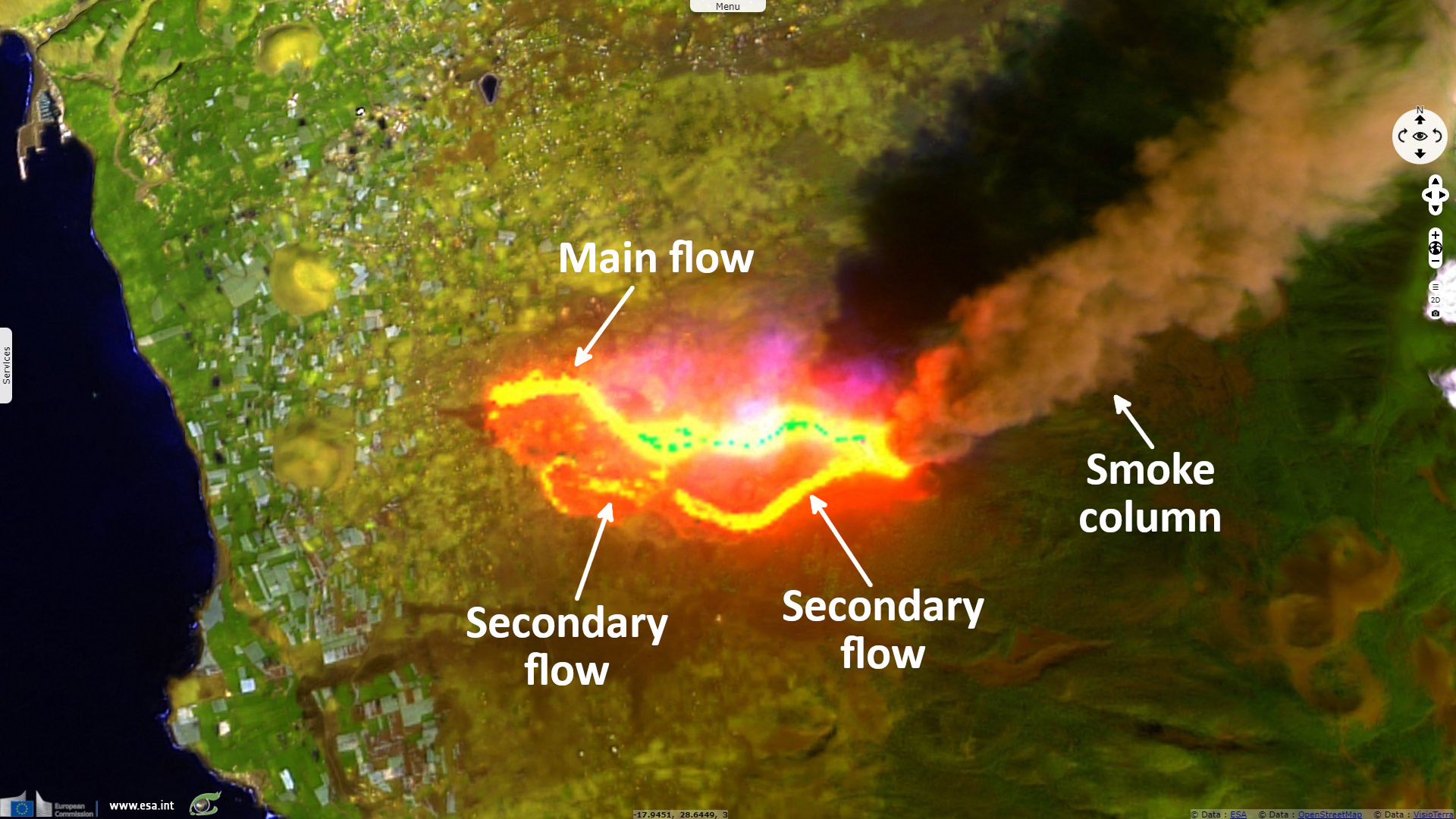 "Tremor amplitude decreased around noon on 25 September, along with the intensity of the Strombolian explosions. During 25-26 September ash fell in nearby municipalities and as far as the east coast of the island. On 26 September the PEVOLCA steering committee recommended that residents who had evacuated two days earlier could return. The report described two main lava flows, with a highly fluid northern flow and a southern flow that was 2.5 km long."
Fig. 9 - S2 (30.09.2021) - Lava reached the sea on 28 Sept., destroying hundreds of houses on its path, adding to the island size as it cooled.
3D view 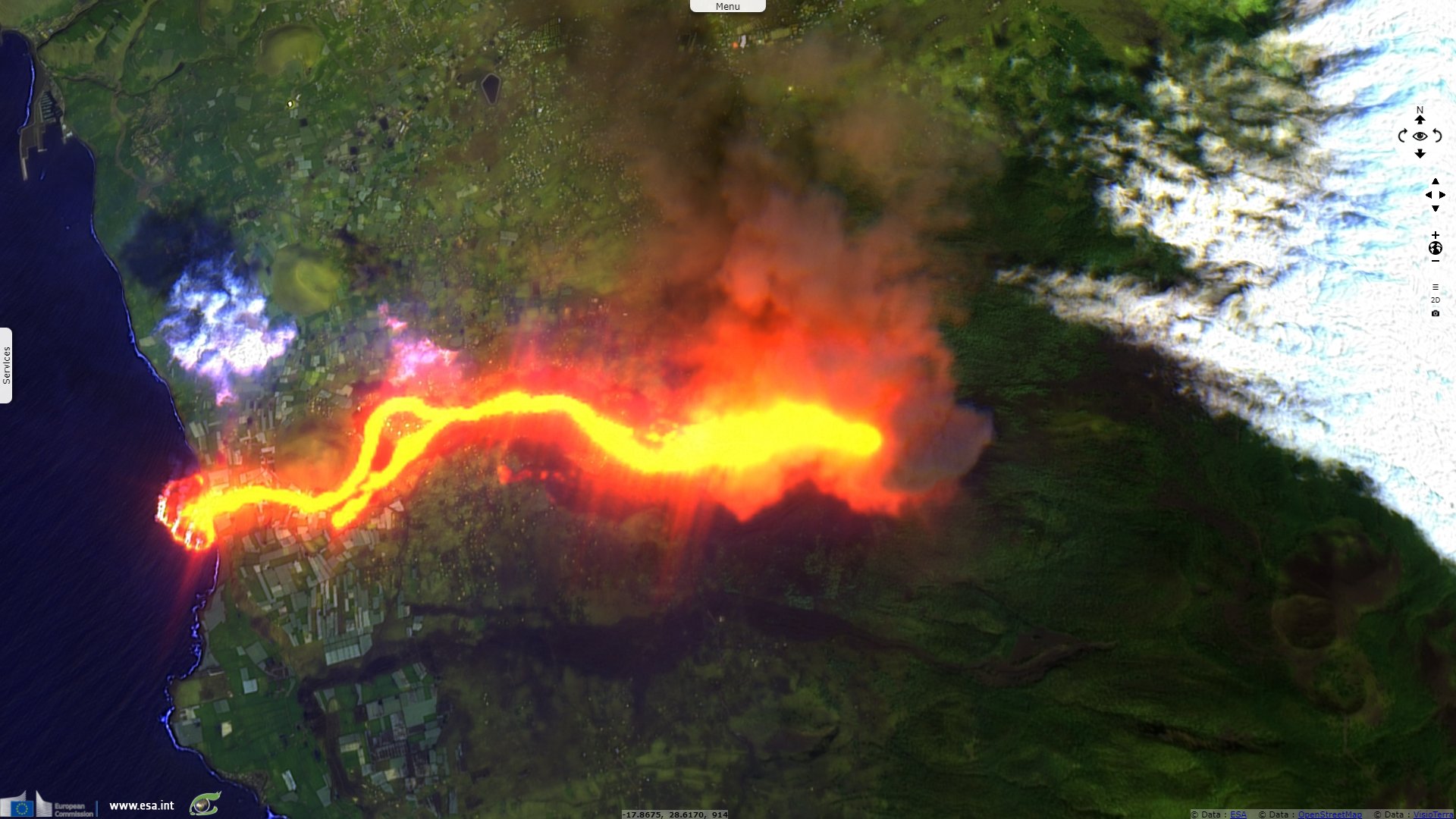 "Sulfur dioxide emissions remained significant with an average rate of 25 000 tons per day, and ash plumes rose as high as 3 km above the vents. The flow was 600 m across at the widest part and the leading edge was 4-6 m tall. Lava fountaining and low-intensity Strombolian explosions persisted. Multiple lava fountains feeding flows were visible on 27 September though the activity waned for a period of about eight hours. By the evening activity had resumed and low-intensity Strombolian explosions were visible."
Fig. 10 - L8 (26.09.2021) - The hottest part of the flow is visible in VNIR.
3D view 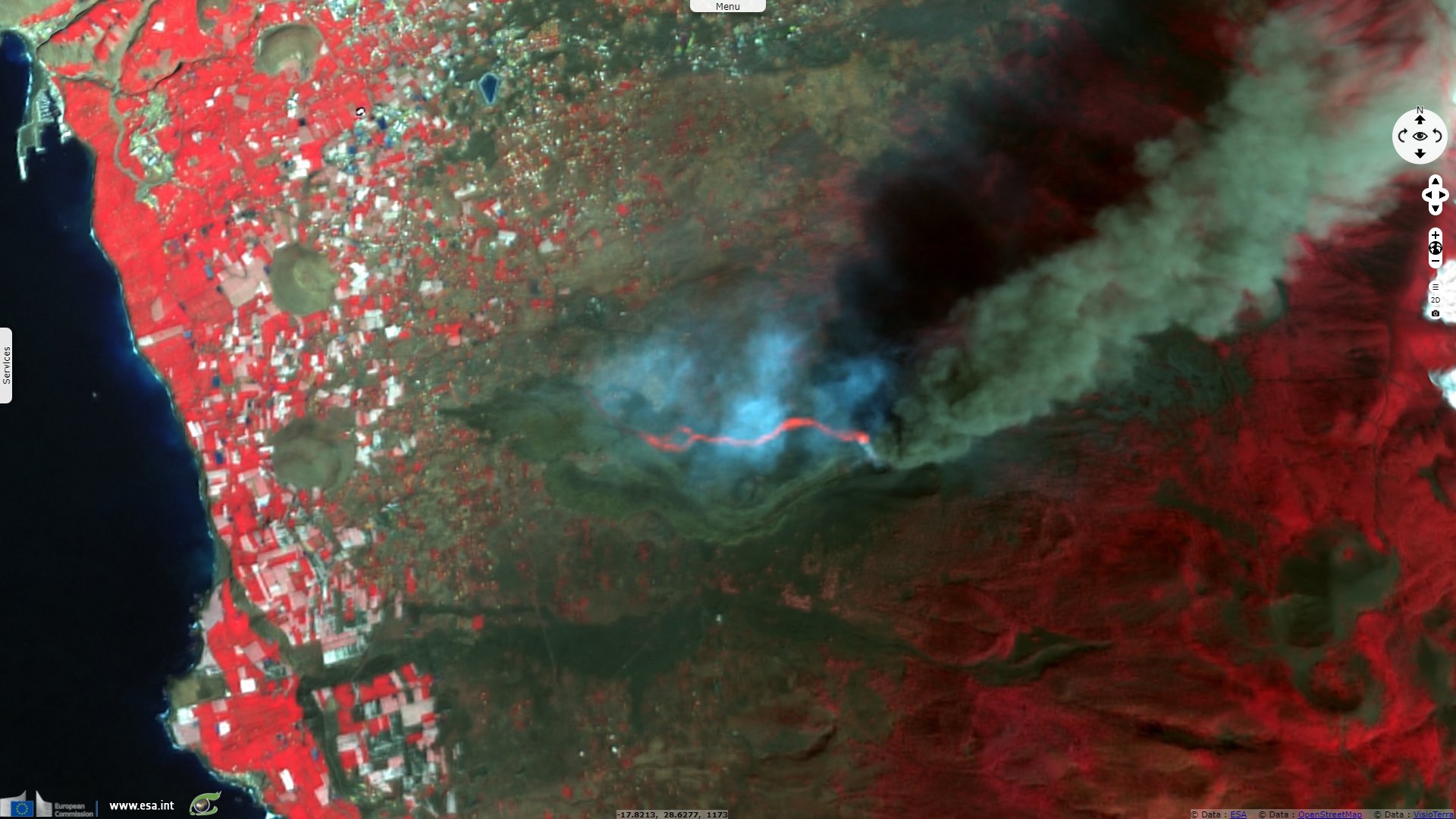 "Beginning at 02:45 on 28 September lava fountains fed a new high-temperature, fast-moving flow that descended on top of older flank flows. The leading edge of the main flow continued to advance west and covered banana greenhouses, burning the plastic and igniting a storage of fertilizer resulting in small explosions and a brown odorous plume. In preparation for a possible ocean entry, authorities recommended that residents within a 5 km radius of the coastline keep their doors and windows closed, to stay away from windows in case they break, and to cover faces and skin in case of ashfall. Dense ash-and-gas plumes continued to rise from the main vents, as high as 5 km; the rising plume created gravity waves that looked like ripples moving away from the top of the plume. Late in the day lava reached the coastal area, descended a 100-m-high sea cliff, and by 23:02 reached the ocean at Playa de los Guirres. Black-and-white plumes rose from where the lava contacted the water."
Fig. 11 - L8 (26.09.2021) - The heat is so intense that the lava flow saturates the sensor on thermal images.
3D view 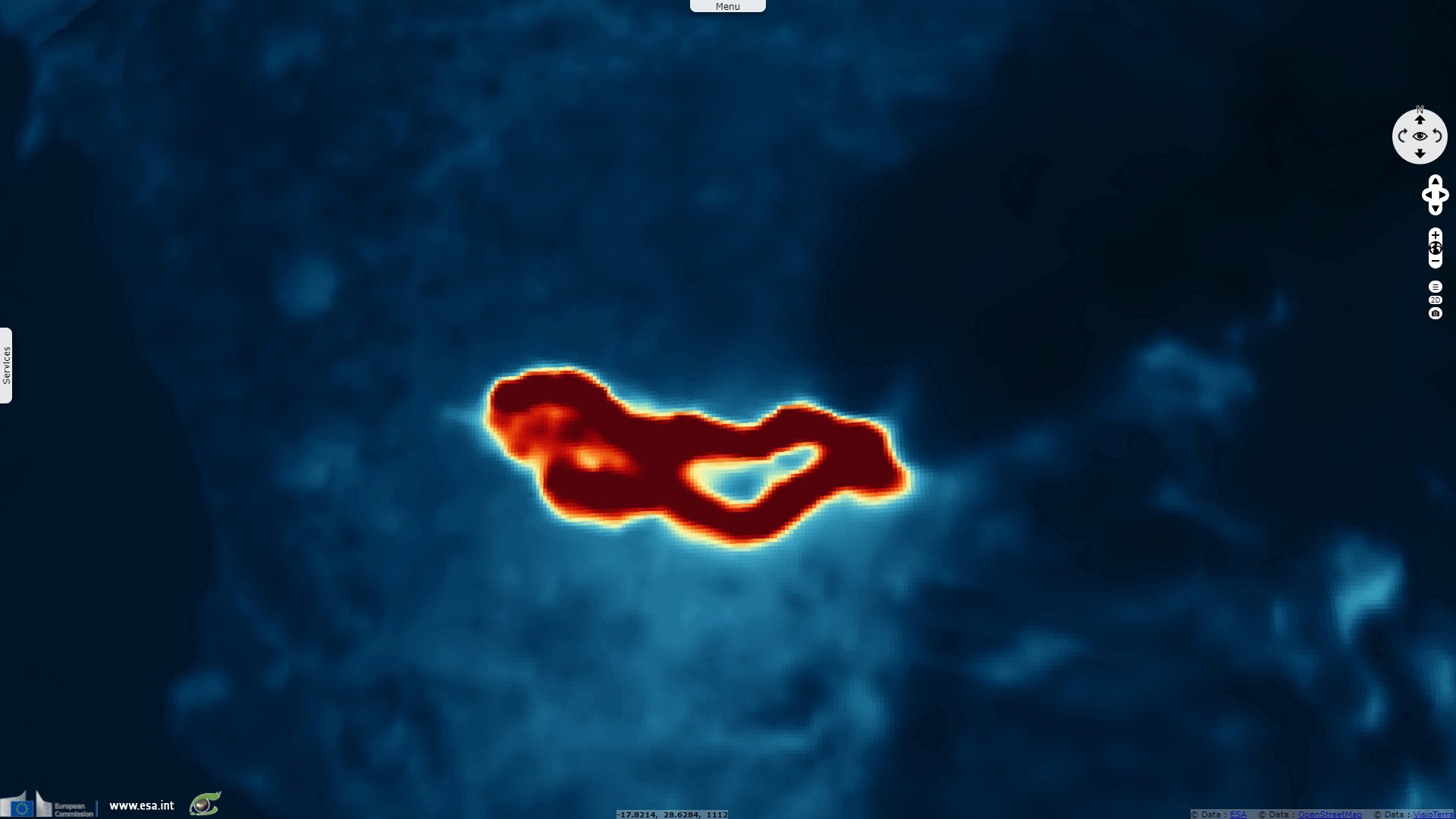 Canarian Weekly explains: "The lava flows from the Cumbre Vieja volcano in La Palma reached the sea on Tuesday night after ten days of the eruption. The lava flowed through the municipalities of El Paso, Los Llanos de Aridane and Tazacorte, where it finally collided with the salty water after falling down a cliff almost 100 meters high. Since then the volvanic material has formed a lava delta or ‘fajana’, which now occupies almost 500 metres of the coastline, reaches a height of 30 metres and extends over an area of ​​27.7 hectares, the equivalent of almost 28 football pitches." "When the lava reaches the ocean it stays at around 1000°C, while the sea temperature is just 20°C. This temperature difference generates columns of water vapour loaded with hydrochloric acid as a consequence of the significant chloride content in saltwater."
Fig. 12 - S2 (30.08.2021) - This view shows the dark fresh lava and the steam produced as it reaches the ocean.
3D view 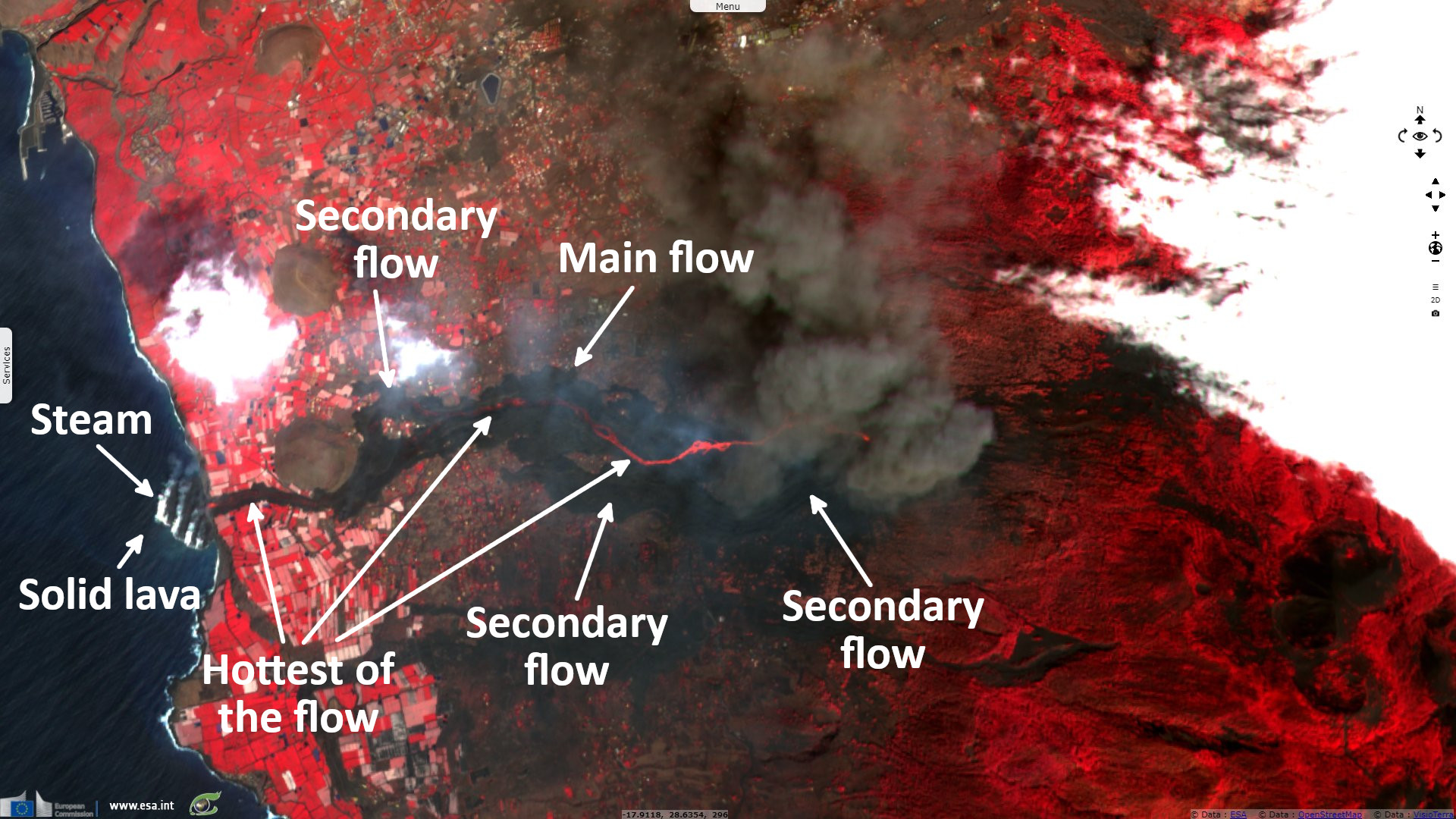 In an article related by the Guardian, Agence France Presse deals with the consequences: "While the feared explosion and clouds of toxic gases released as the molten rock hit the ocean have not materialised, a forecast change in wind may bring new hazards, the Pevolca volcanic emergency committee warned."
Fig. 13 - S2 (30.08.2021) - Pansharpened view using 3 near-infrared bands to highlight variations in temperature at the centre of the flow.
3D view 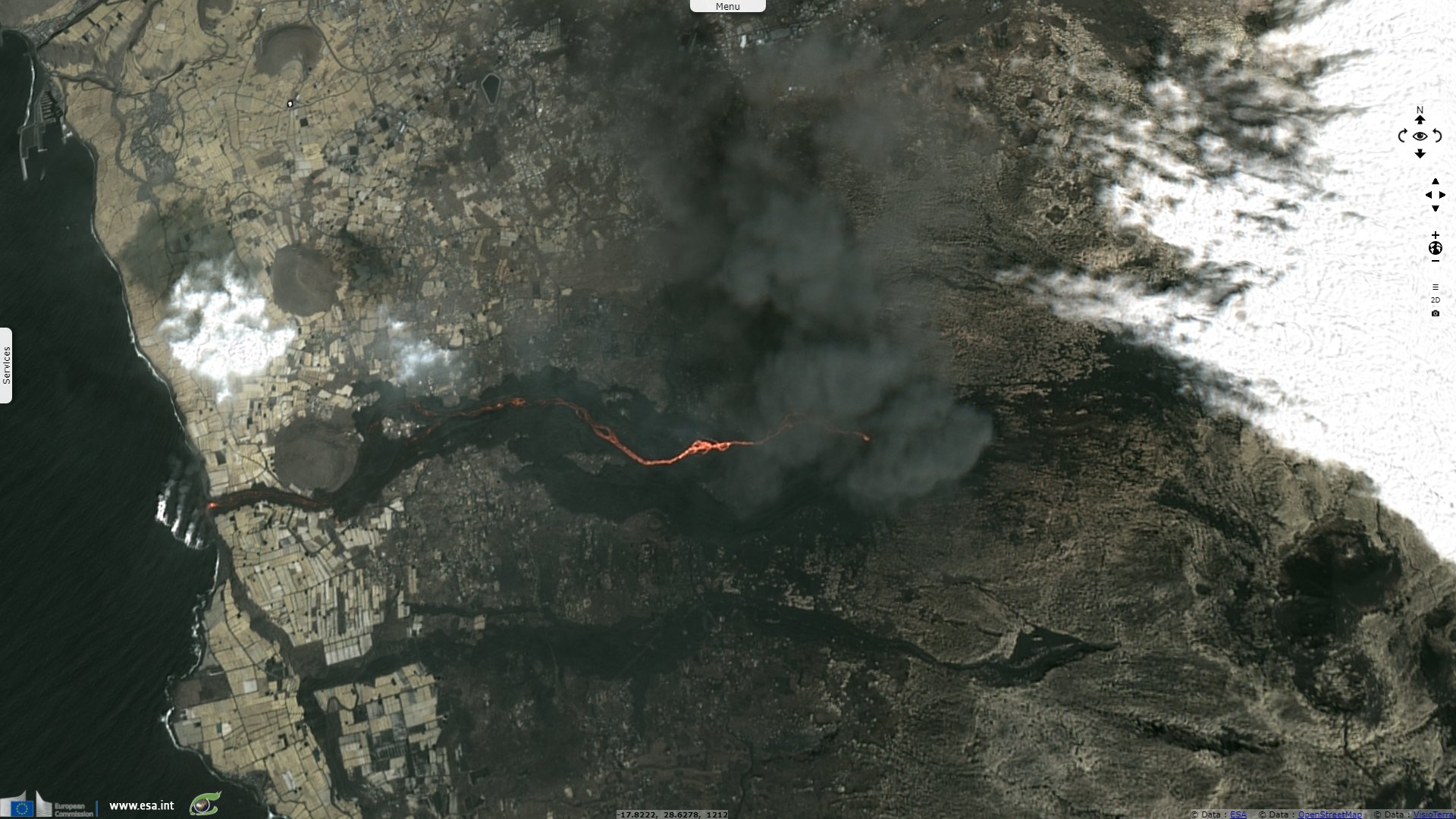 "La Palma has been declared a natural disaster zone, with the lava scorching its way across 476 hectares of land, the local government said on Twitter. It has so far destroyed 855 buildings, an increase of more than 200 in just over 24 hours, the EU’s Copernicus observation programme said on Twitter." "But while the eruption of La Cumbre Vieja has forced about 6000 people to flee their homes, so far, nobody has been injured or killed. Although the volcano is still erupting, La Palma’s airport resumed operations on Wednesday after flights were suspended at the weekend because of the ash."
The views expressed herein can in no way be taken to reflect the official opinion of the European Space Agency or the European Union.
Contains modified Copernicus Sentinel data 2021, processed by VisioTerra.