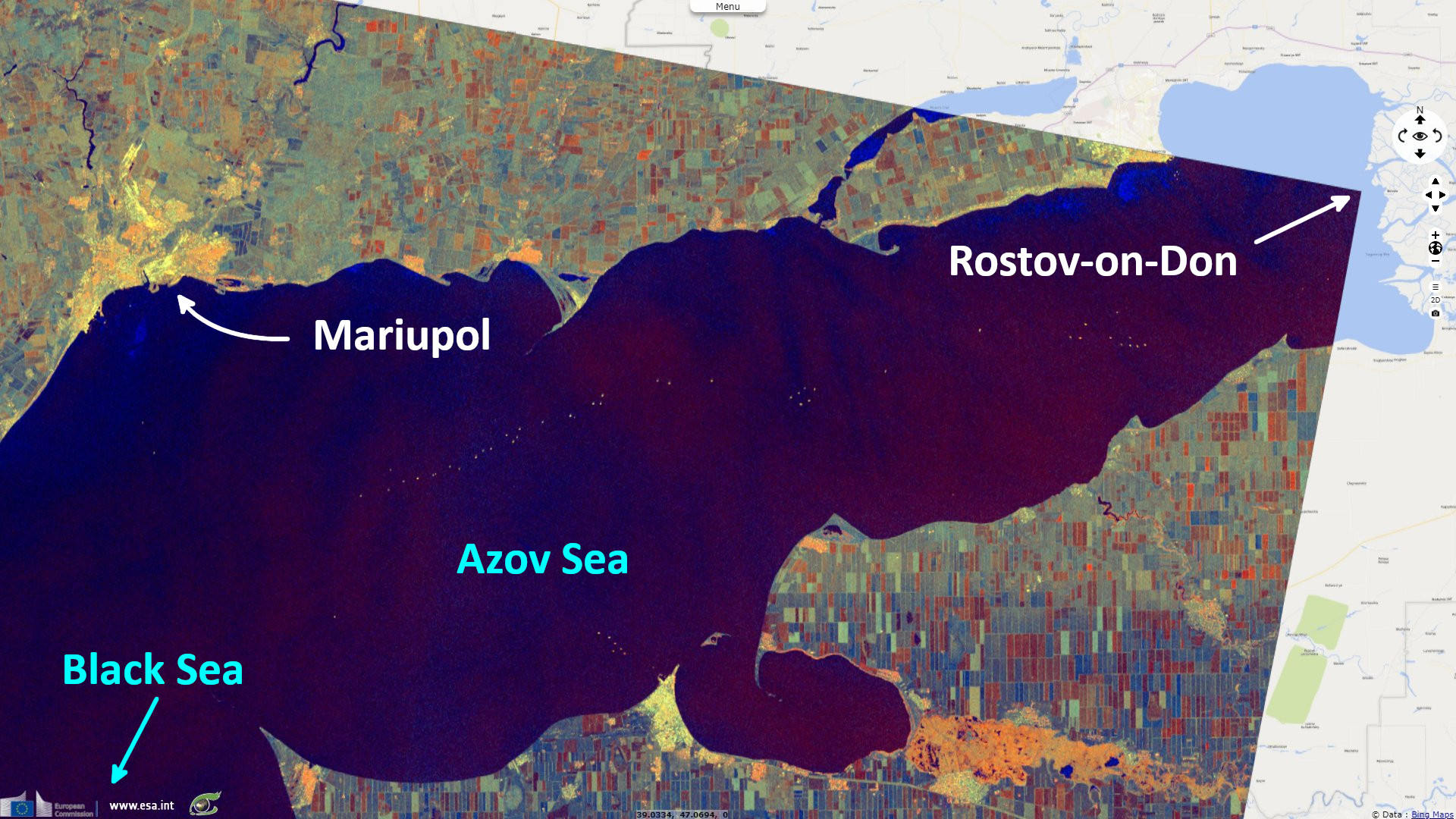 The Crimean Bridge has been built by Russia after its annexion of Crimea in 2014. The arches of the Crimean Bridge do not allow the passage of ships with an air draft of more than 33 metres since its construction by Russia in 2018. This limitation excludes Panamax vessels exceeding this height, which previously accounted for 20% of traffic to the Ukrainian ports of Berdiansk and Mariupol, through which a large proportion of grain exports and almost all steel traffic from the Donbass pass. Ukrainian exports have become harder with the blockade of the Ukrainian ports. Since the Russian invasion of Ukraine at the end of February, grain shipments of all kinds—including barley and rye as well as wheat—have been blocked from exiting Ukraine. Nearly 25 million tons of grain are currently sitting unused in Ukrainian storage facilities. Of this, up to 12 million tons of wheat destined for global markets could fail to leave Black Sea ports because of the blockades. In addition to the port blockade, Ukraine’s Foreign Ministry has accused Russia of stealing grain and trying to sell some on global markets. It cited official estimates indicating that Russia already may have stolen 400 000 to 500 000 metric tons of grain that cost over $100 million.
Fig. 2 - S2 (12.05.2022) - The port of Odessa is the largest Ukrainian seaport, with a total annual traffic capacity of 40 million tonnes (dry & liquid). Main path of Ukrainian exports, it is under blockade since the war started.
2D view 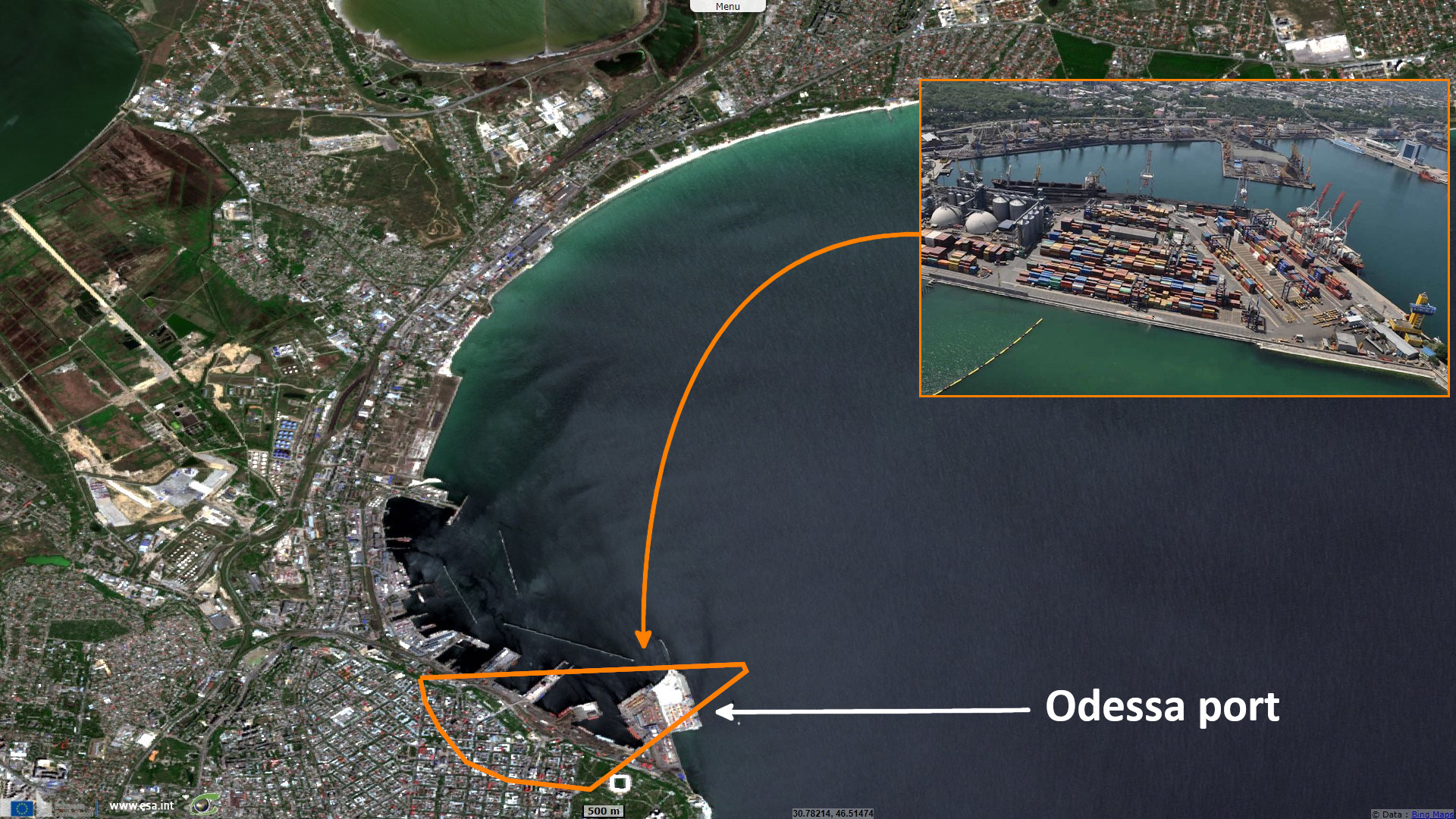 The United Nation’s World Food Programme has already warned that keeping Ukrainian grain in the country could result in 44 million people worldwide falling into starvation. The disruptions from the war have further raised food prices, with the high cost of fertilizers — of which Russia is a top exporter — and cooking oils further squeezing the global food chain. Even before the war in Ukraine, food prices were already at record highs: As of February 2022, year-over-year food prices were up 20% according to the Food and Agriculture Organization. The war further increased year-over-year prices another 40% in March. The study shows at least 25 African countries import a third of their wheat from Russia and Ukraine, and 15 of them import more than half from those two countries. Egypt, Turkey, Bangladesh, and Iran buy more than 60% of their wheat from Russia and Ukraine. Oxfam, ALIMA and Save the Children warned that the food crises in West Africa could affect 27 million people, especially in Burkina Faso, Niger, Chad, Mali, and Nigeria. Lebanon, Tunisia, Yemen, Libya, Syria and Pakistan have also been mentioned as threatened. This comes on top of the East African drought, the North American heatwave and drought, European extreme weather and the Southern Cone heatwave. Furthermore, India has stopped its wheat export to protect its local price from the market rise, Indonesia did the same with palm oil due to sunflower oil shortage that made oil price rise.
The views expressed herein can in no way be taken to reflect the official opinion of the European Space Agency or the European Union.
Contains modified Copernicus Sentinel data 2022, processed by VisioTerra.