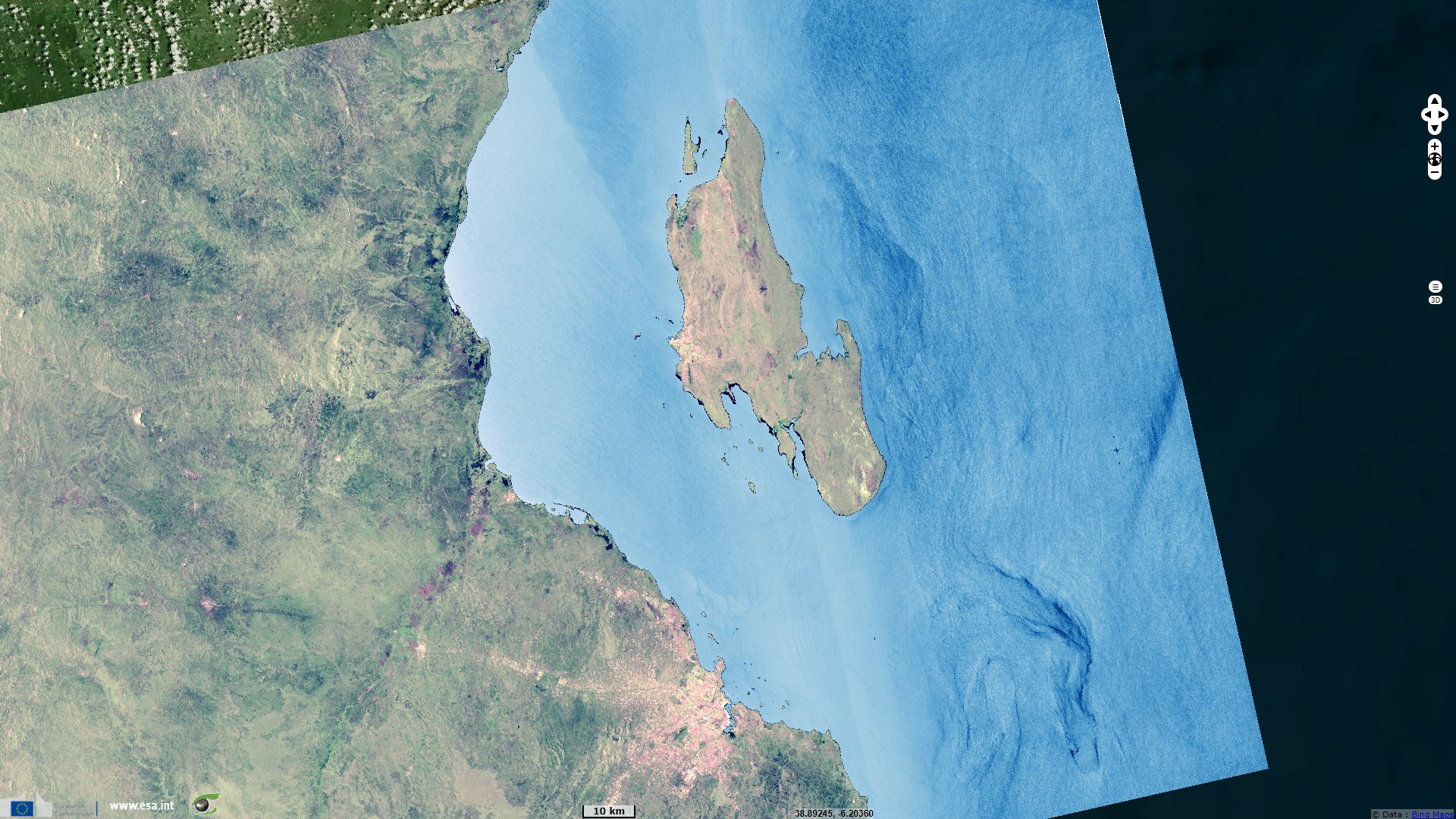 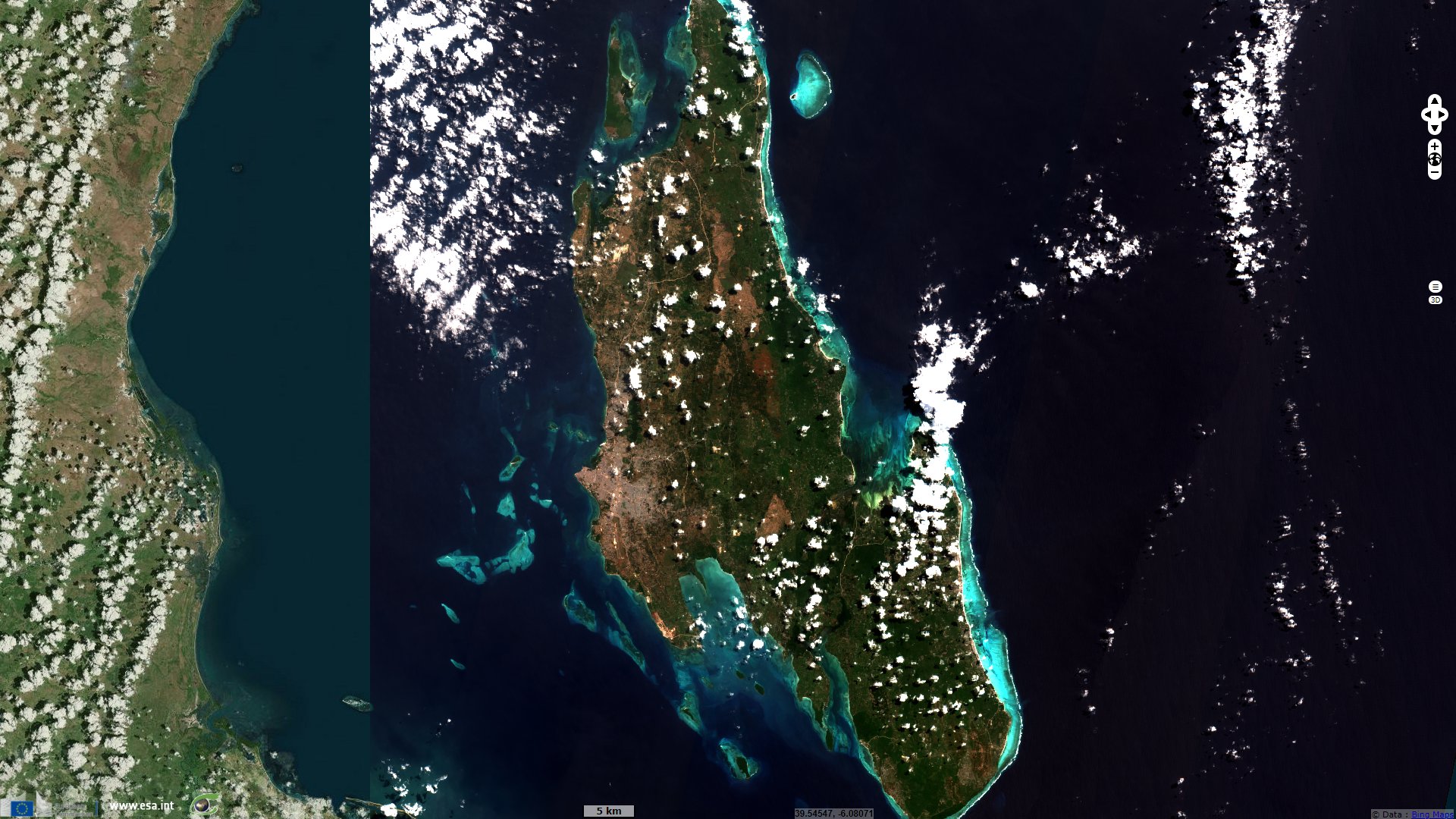 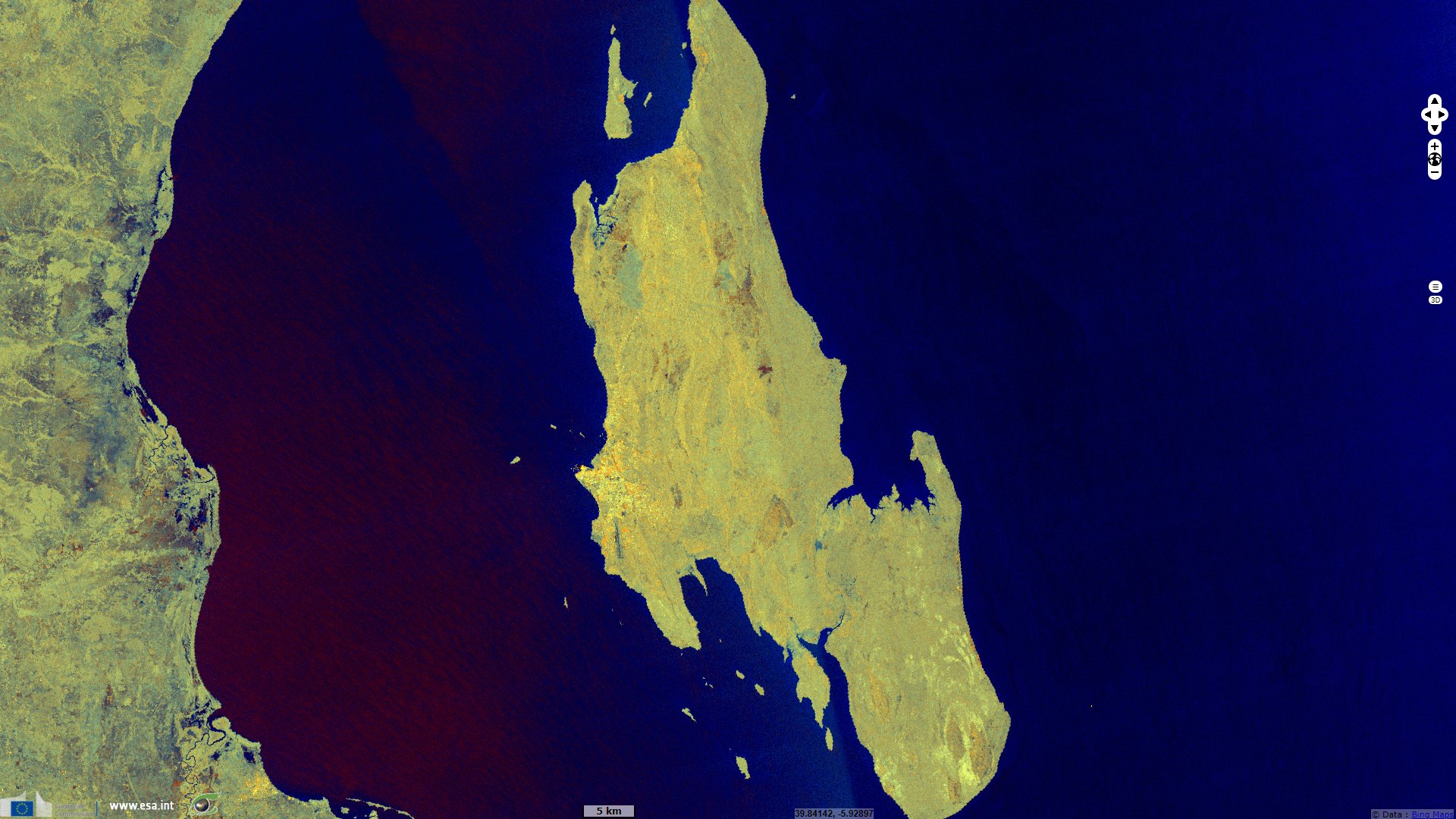 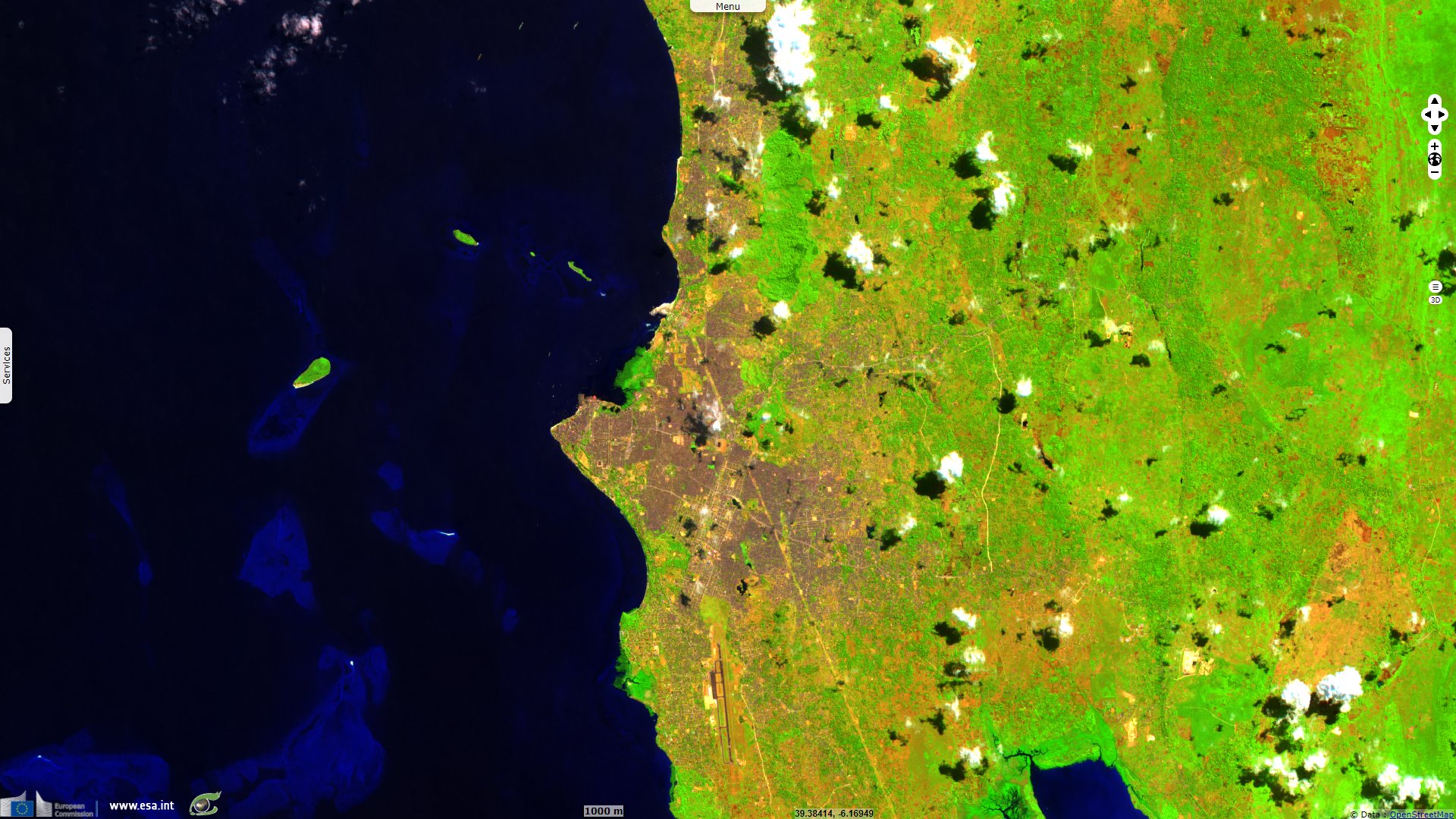 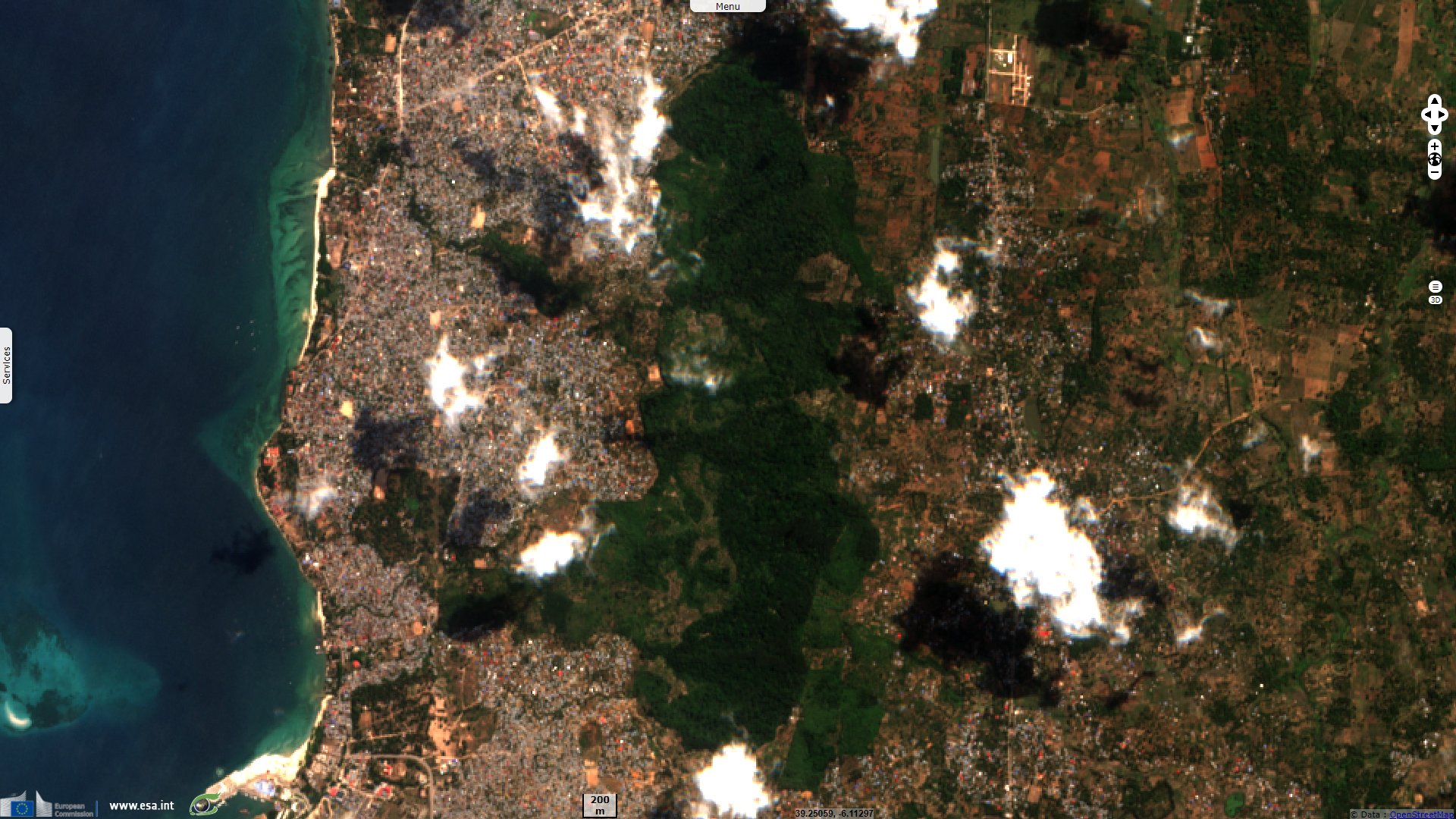 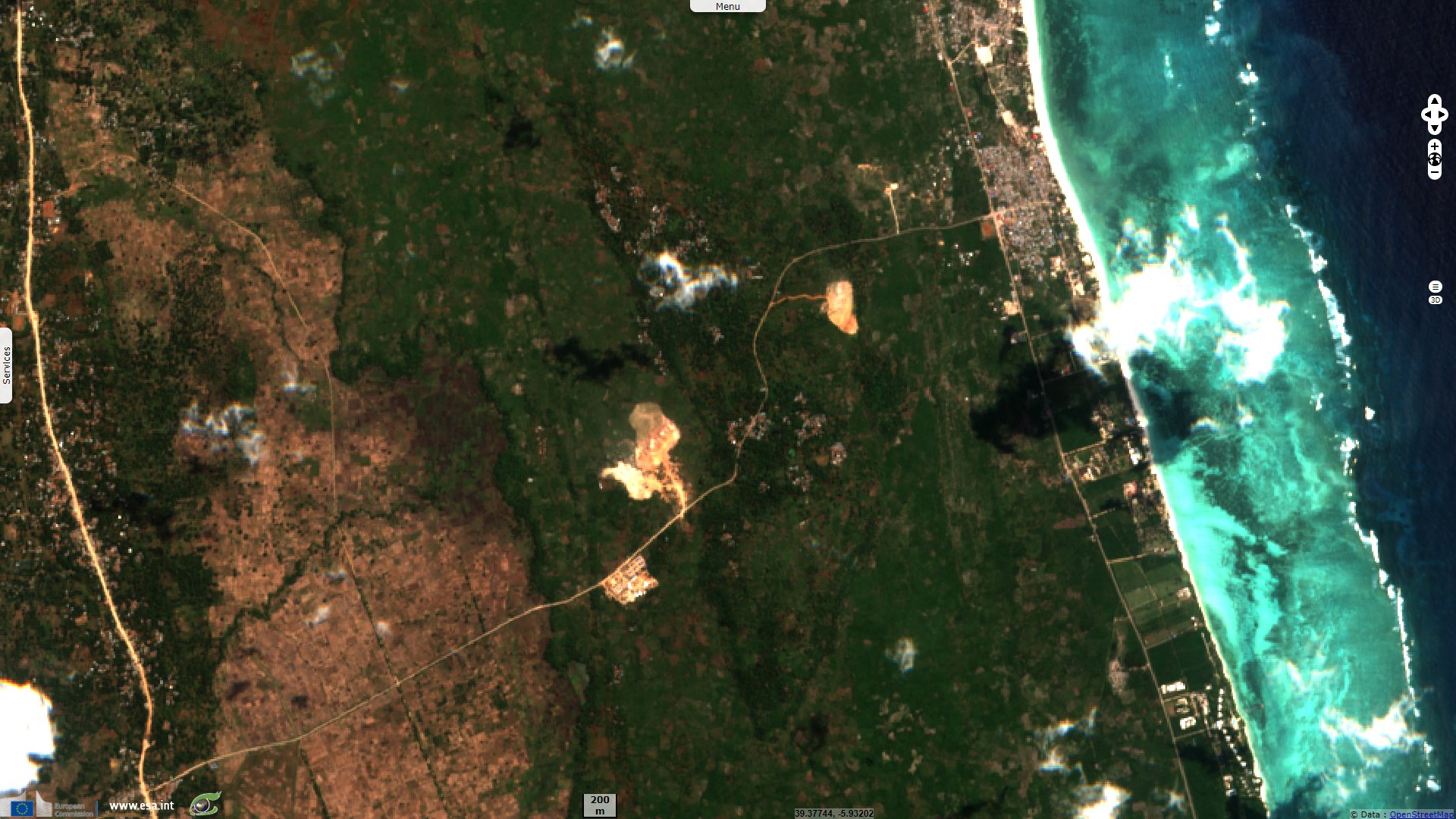 The 31 km² reserve is an important biodiversity spot in the coral rag zone. The forest reserve is rich both in faunal and floral species.
Fig. 7 - S1 (19.04.2015) - Jozani-Chwaka Bay Conservation Area, the only national park on the island.
2D view 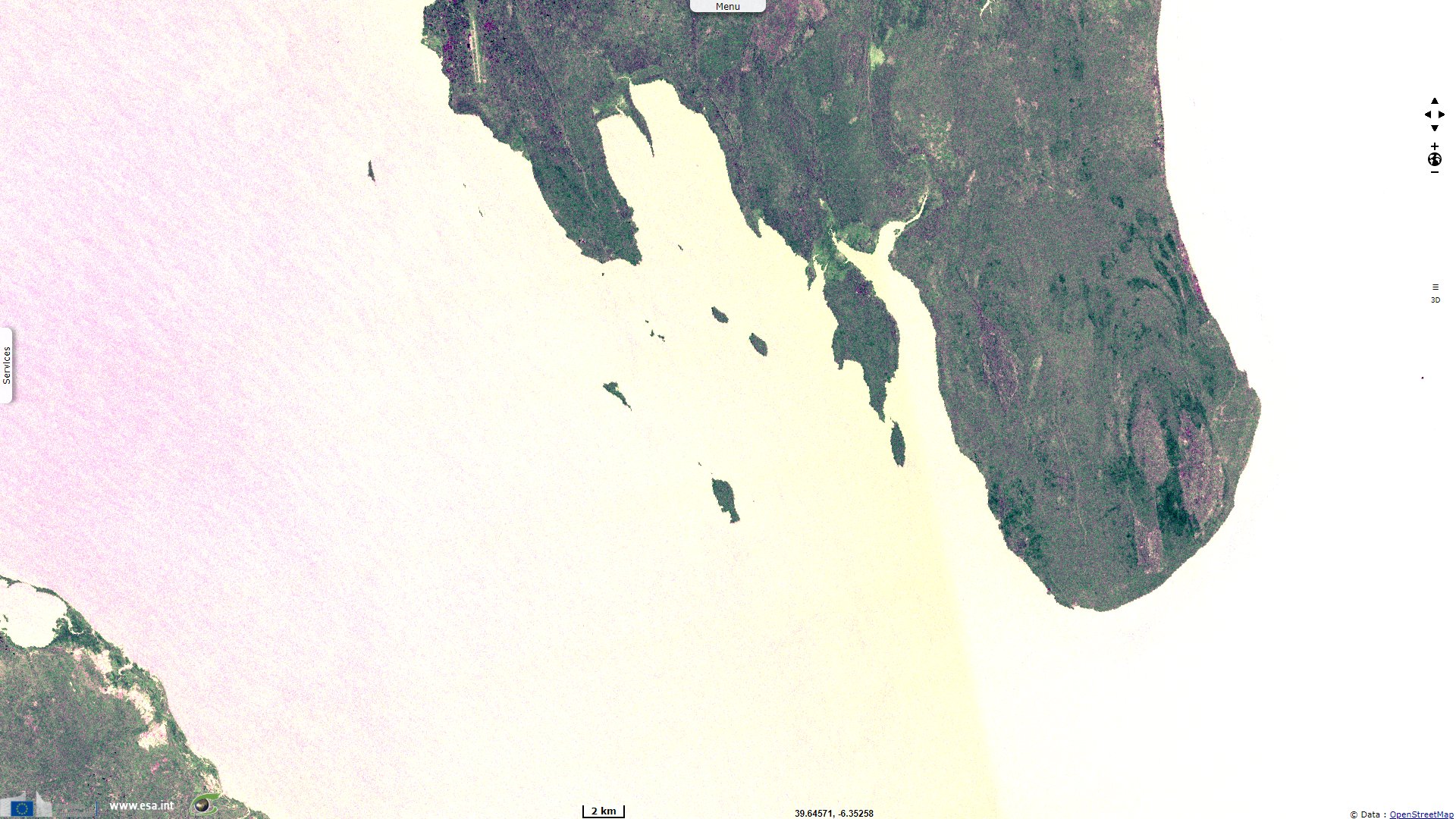 Jozani-Chwaka Bay ConservationArea is part of the tentative list of the UNESCO to reach the World Heritage Centre status. Its sheet describes it as follows: "Jozani-Chwaka Bay Conservation Area is a natural protected forest reserve covering about 30km² about 23 miles South of Zanzibar Town. The coral rag zone is habitat for wildlife species of national and international significance including the endemic and near extinct Zanzibar leopard, the red colobus monkey and the Ader duiker. Jozani forest is the only area where these particular species could be preserved in-situ. The forest also harbours the five important vegetation types spread over the small area not exceeding 30km² i.e. the ground water forest: the coral rag forest ; salt marsh; mangrove forest; and sea grass beds. The present and past modifications by men include: - a small area on the ground water forest planted with Callophyllum inophyllum - considered to be indigenous and some exotics such as Casuarina equisetifolia and Eucalypts and nature trails constructed for ecotourism activities in the ground water forest and in mangrove."
Fig. 8 - S2 (25.07.2019) - Chwaka Bay is also a UNESCO Biosphere Reserve.
3D view 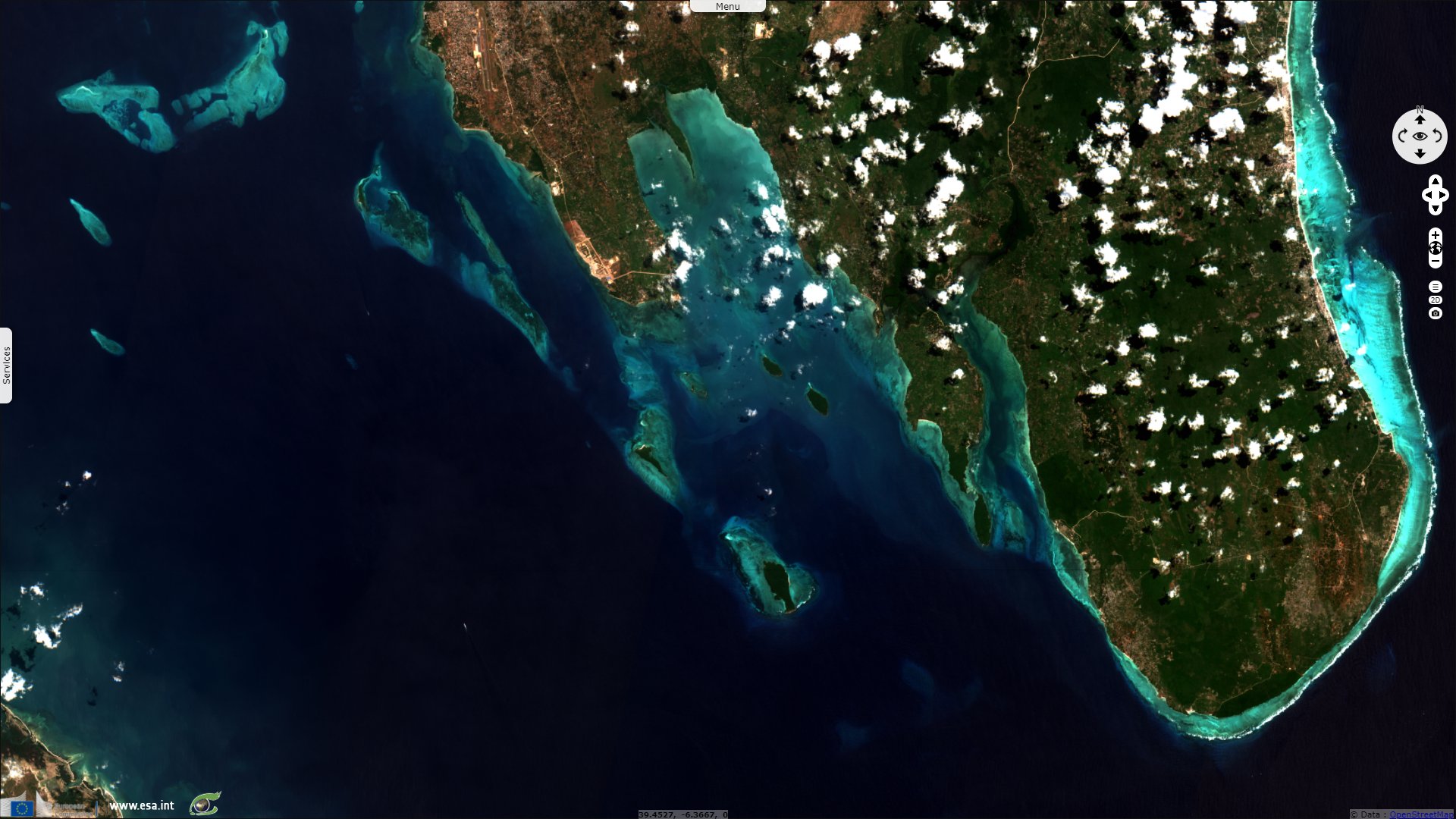 It is also a Biosphere Reserve recognized by UNESCO which writes about the national park: "The Jozani–Chwaka Bay Biosphere Reserve contains the only national park on the island of Zanzibar in Tanzania. Its landscape is a mosaic of mangroves, tropical forests and coral rug forests, as well as groundwater, salt marshes, and agricultural and residential areas. The site is a biodiversity hotspot home to reef fish species, dolphins and 168 species of birds including 30 species of global and regional importance. Out of the site’s 291 known plant species, 21 are considered to be endangered. The inhabitants of the reserve live mainly from activities related to tourism, fishing, beekeeping, butterfly rearing and crab fattening."
Fig. 9 - S1 (19.04.2015) - Focus on the north-west part of the Chwaka Bay.
2D view 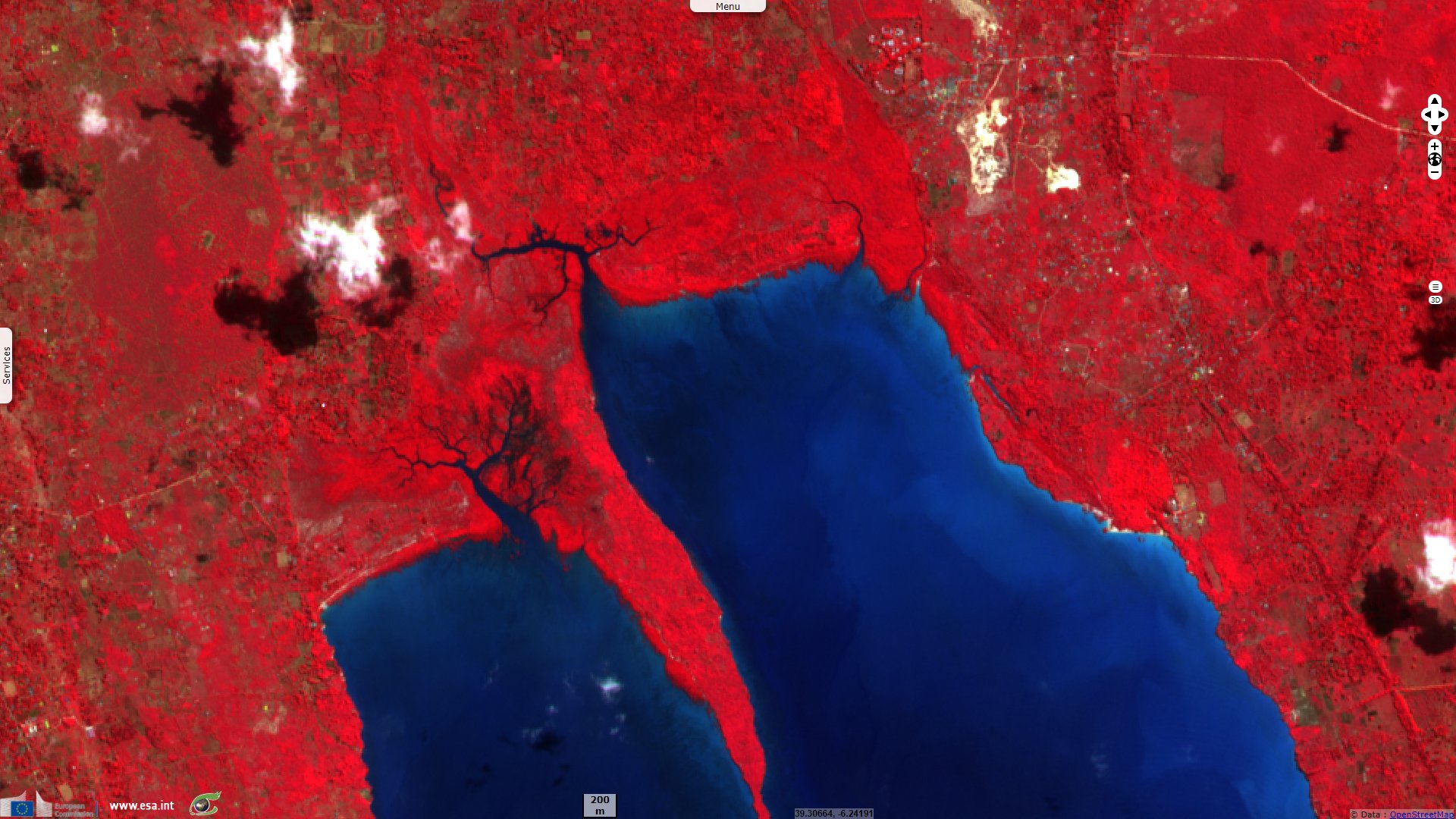 "The area is virtually flat, with the exception of groundwater forest, which features moderate slopes on the western and eastern sides. The soil of the Jozani forest is rich, black and highly organic, but ceases abruptly at the forest margin, giving way to broken coral rag with shallow pockets of light brown sandy soil. The landscape is a mosaic of mangroves, tropical forests and coral rug forests, groundwater, salt marshes, and agricultural and residential areas, making the area a biodiversity hotspot. Out of the 291 plants species, which belong to 83 families, 21 are under threat or endangered. Several plant species are used for traditional medicines. The area is home to many faunal species including the African civet, mangrove kingfisher and African goshawk, as well as endangered endemic species such as the Kassina Jozani frog, Zanzibar red colobus, Aders’ duiker and Zanzibar servaline genet."
Fig. 10 - S2 (25.07.2019) - Zoom on the south-east part of Chwaka Bay.
2D view 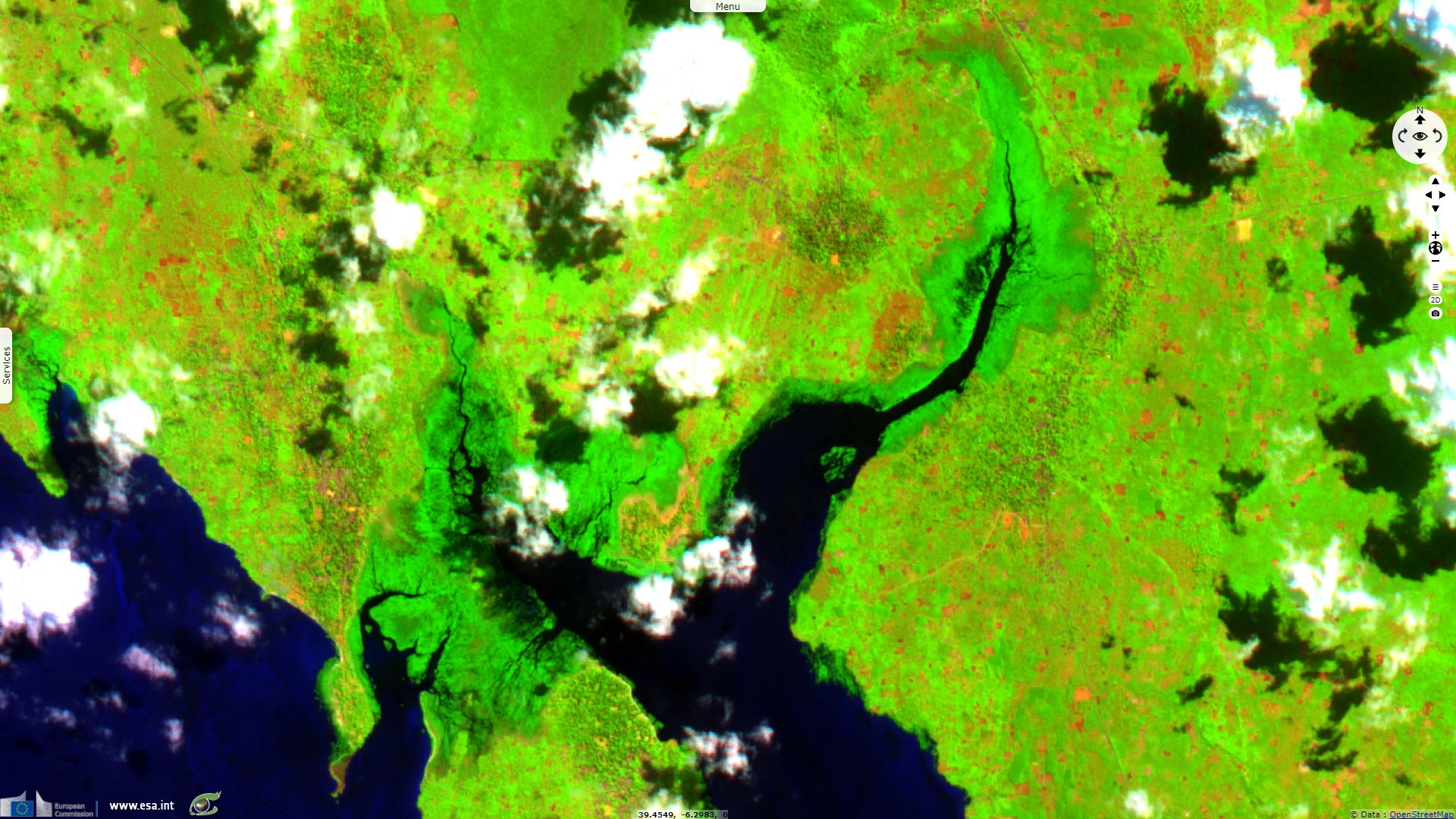 "The core and buffer zones are uninhabited, however, 16 423 people live and practise their livelihoods in the transition zone. The present population around the biosphere reserve is culturally heterogeneous comprising Bantu, Hadimu and Shirazi, with Hadimu being the majority ethnic group and Bantu the minority. Tourism, followed by agriculture and fishing are the most important economic activities, although the local population also practise livestock keeping, and earn their livelihoods from forest products and non-wood forest products such as beekeeping and handicrafts. "
Fig. 11 - S1 (19.04.2015) - Menai Bay Conservation Area, south west of Unguja island.
2D view 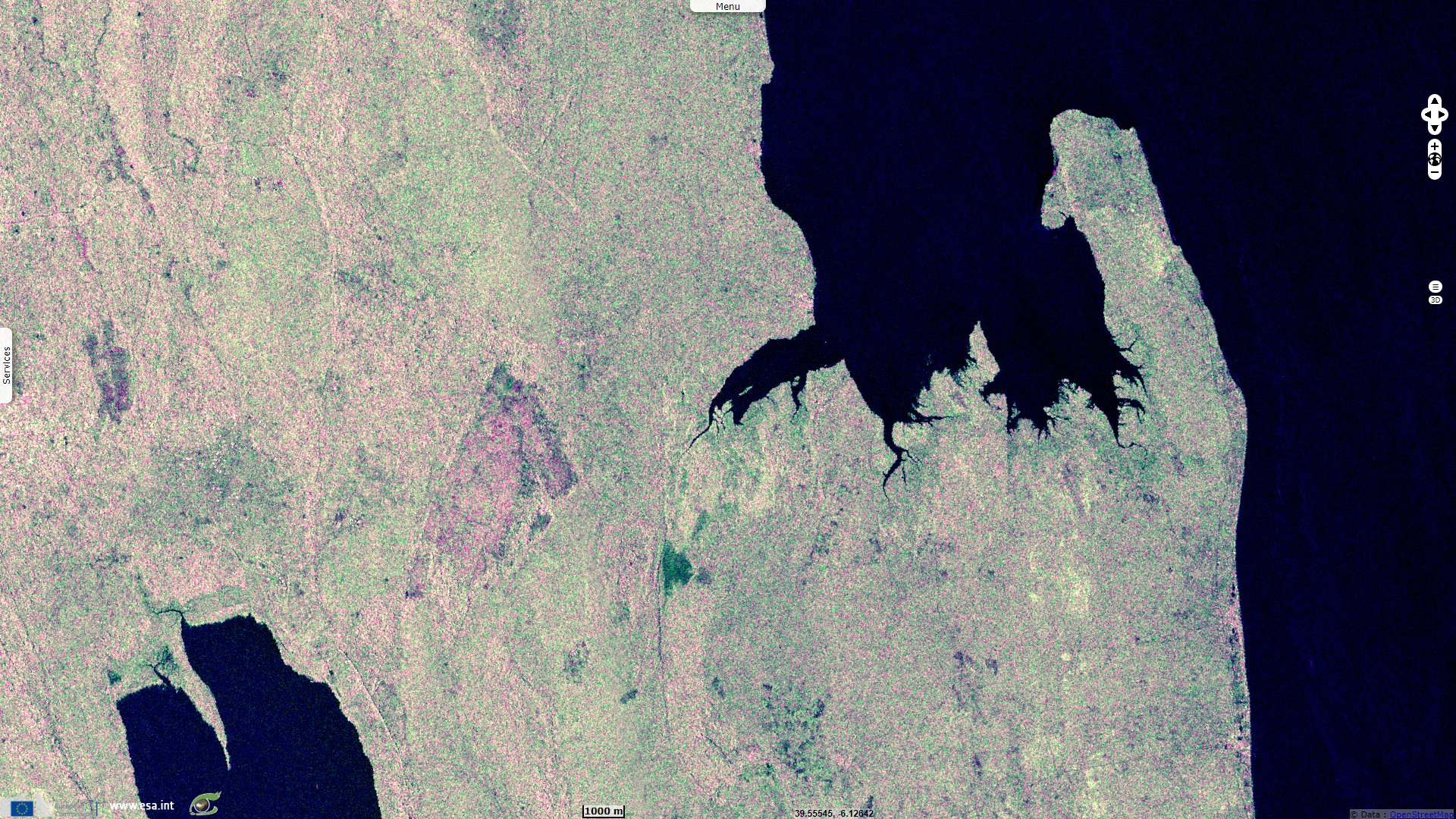 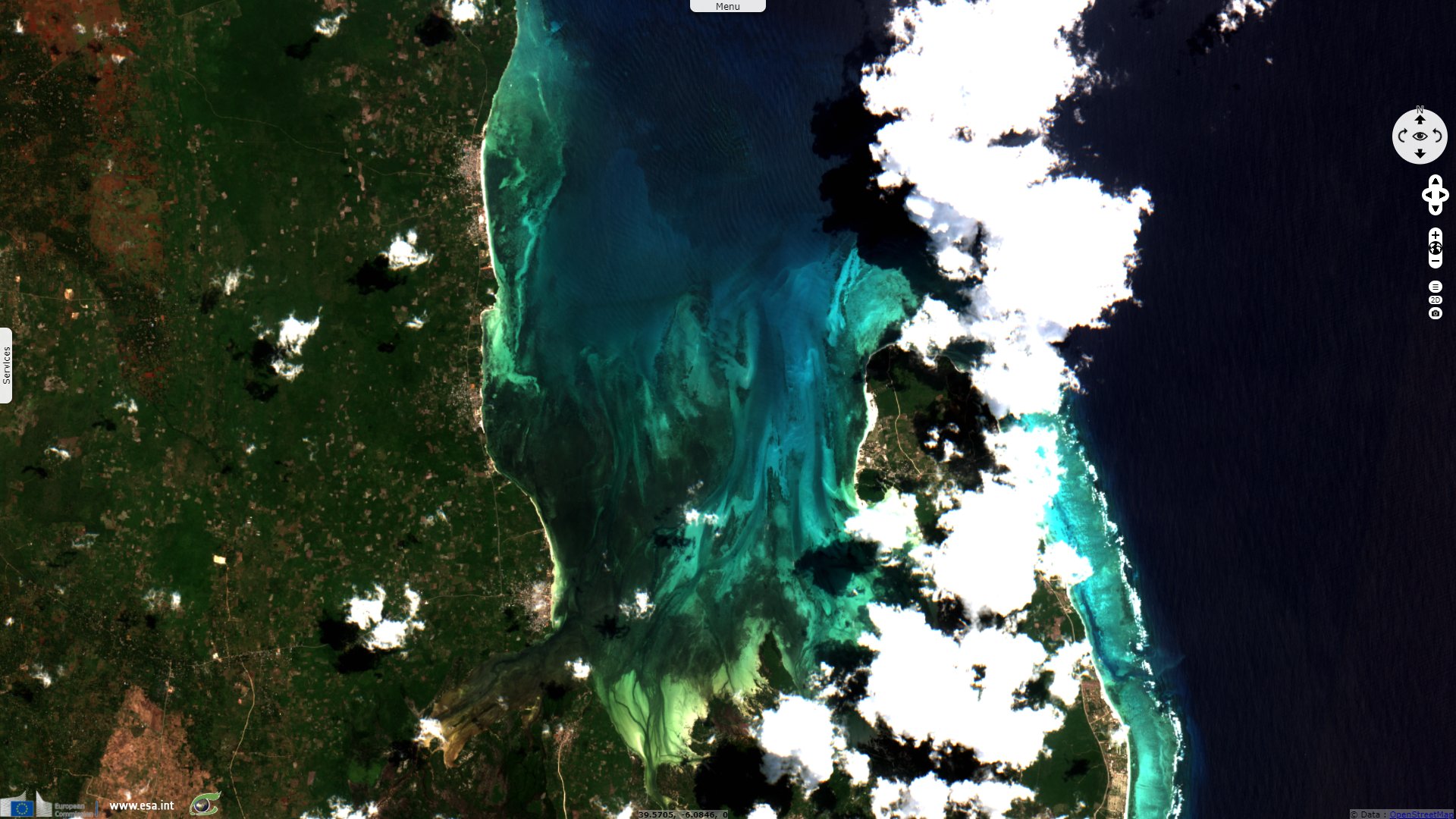 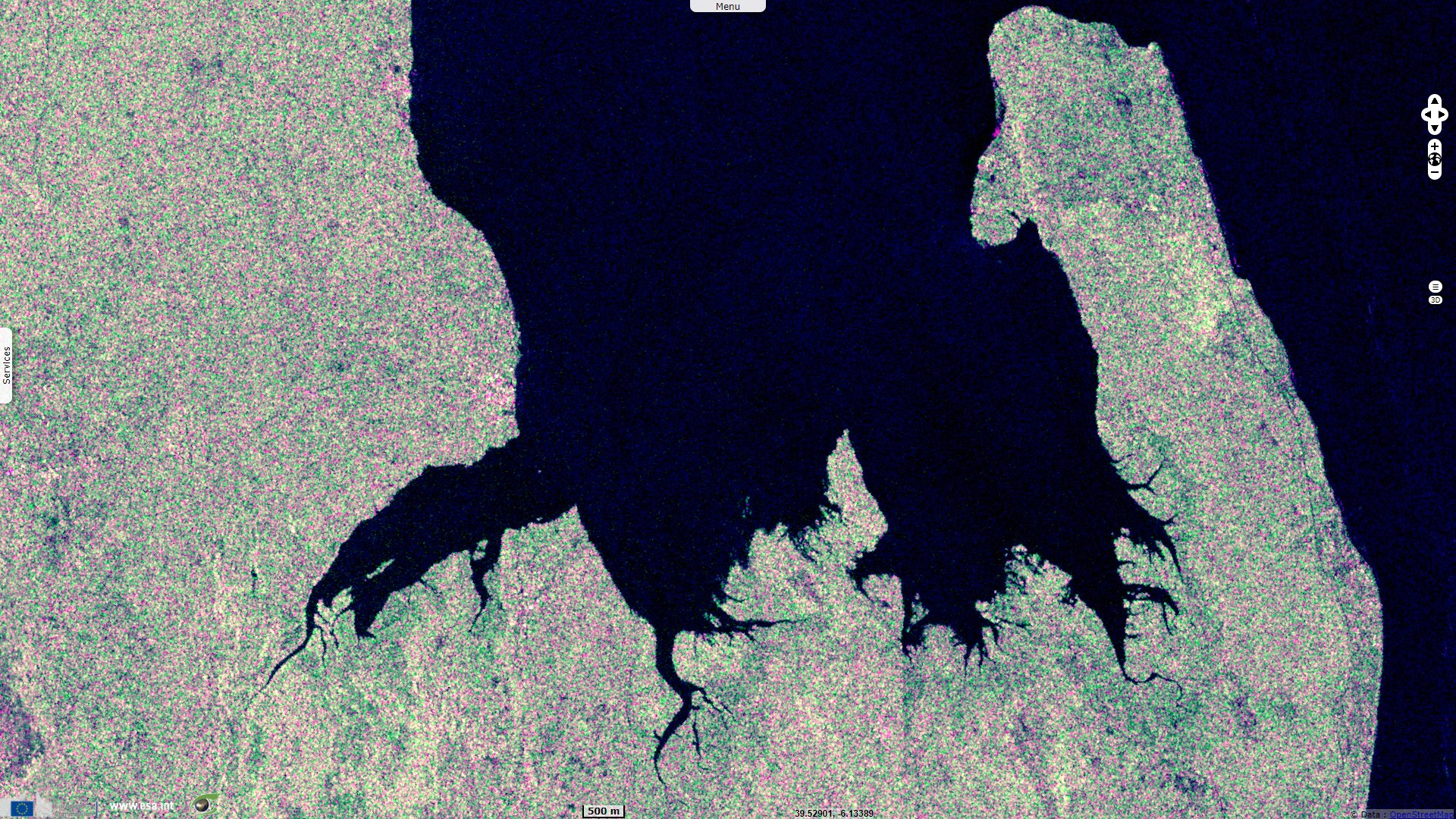 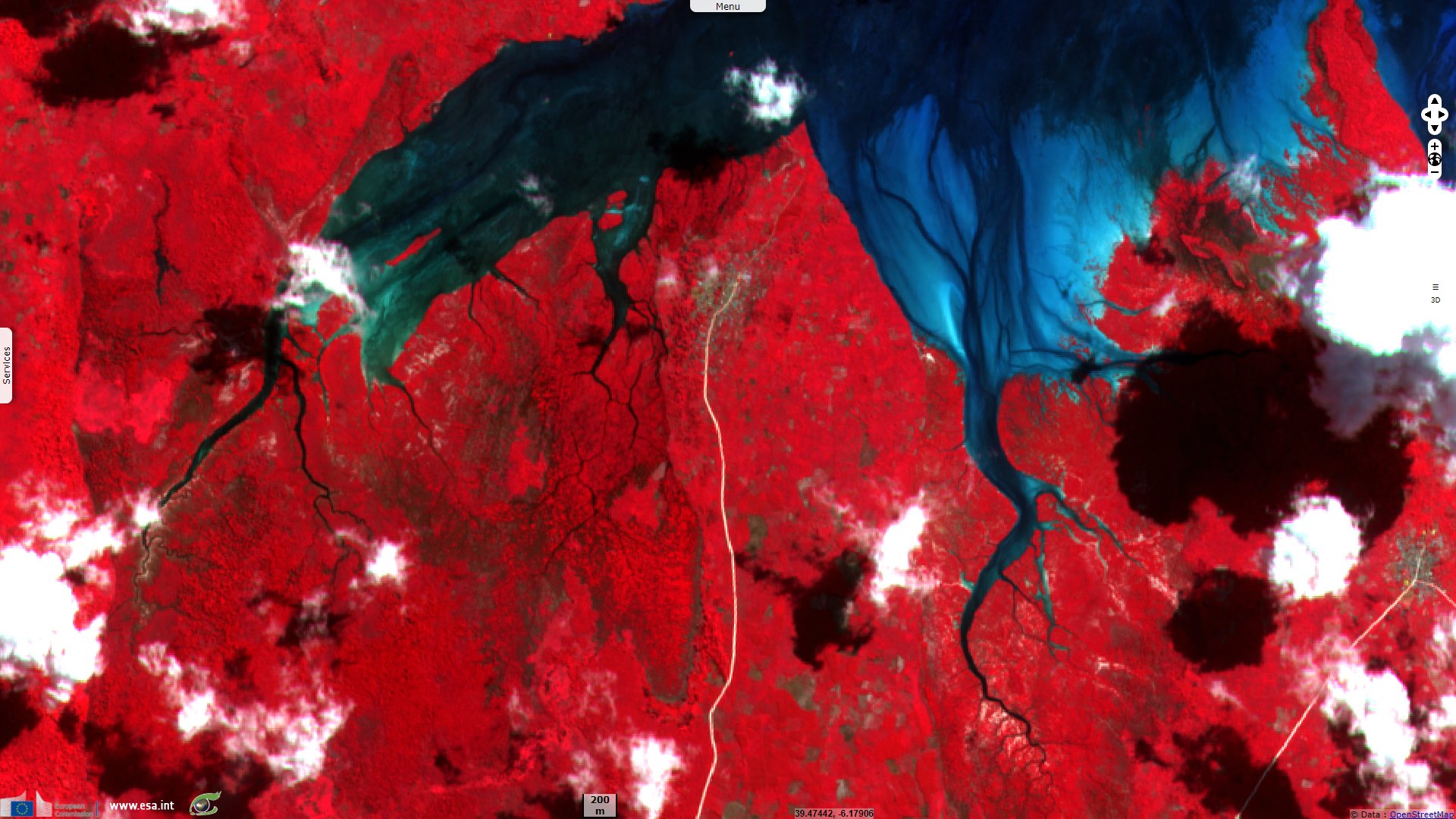