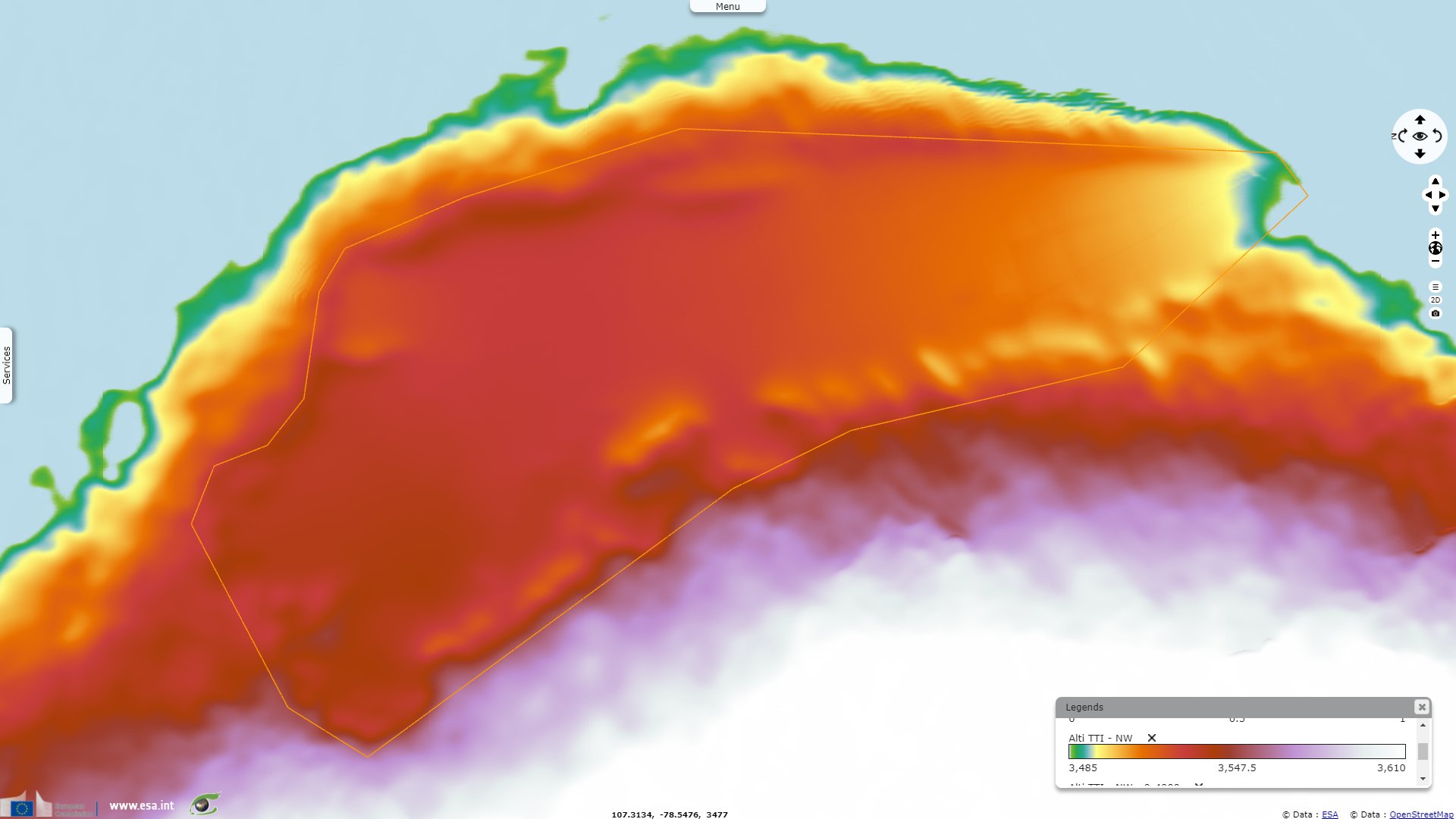 In an article written in 2000, Wired introduced Lake Vostok as follows: "About 240 kilometres long and 50 kilometres across, Lake Vostok is elongated in shape, much like eastern Africa's Lake Malawi or Siberia's Lake Baikal. In area (over 3350 km²), it's nearly the size of Lake Ladoga, the greatest of Russia's western lakes. Its volume (12 km3) is a good match for Lake Superior's. Its maximum depth (600 m) is similar to Lake Tahoe's." "Lake Vostok sits beneath 4 kilometres of solid ice, close to the center of East Antarctica. If it ever had a direct link with the air above it, that connection ended some 30 million years ago. The only visible rocks within 1000 kilometres are shooting stars fallen to Earth, rare black pebbles in the icescape."
Fig. 3 - COP-DEM 30 - Computing the slopes from COP-DEM allow delineating the borders of the lake.
3D view 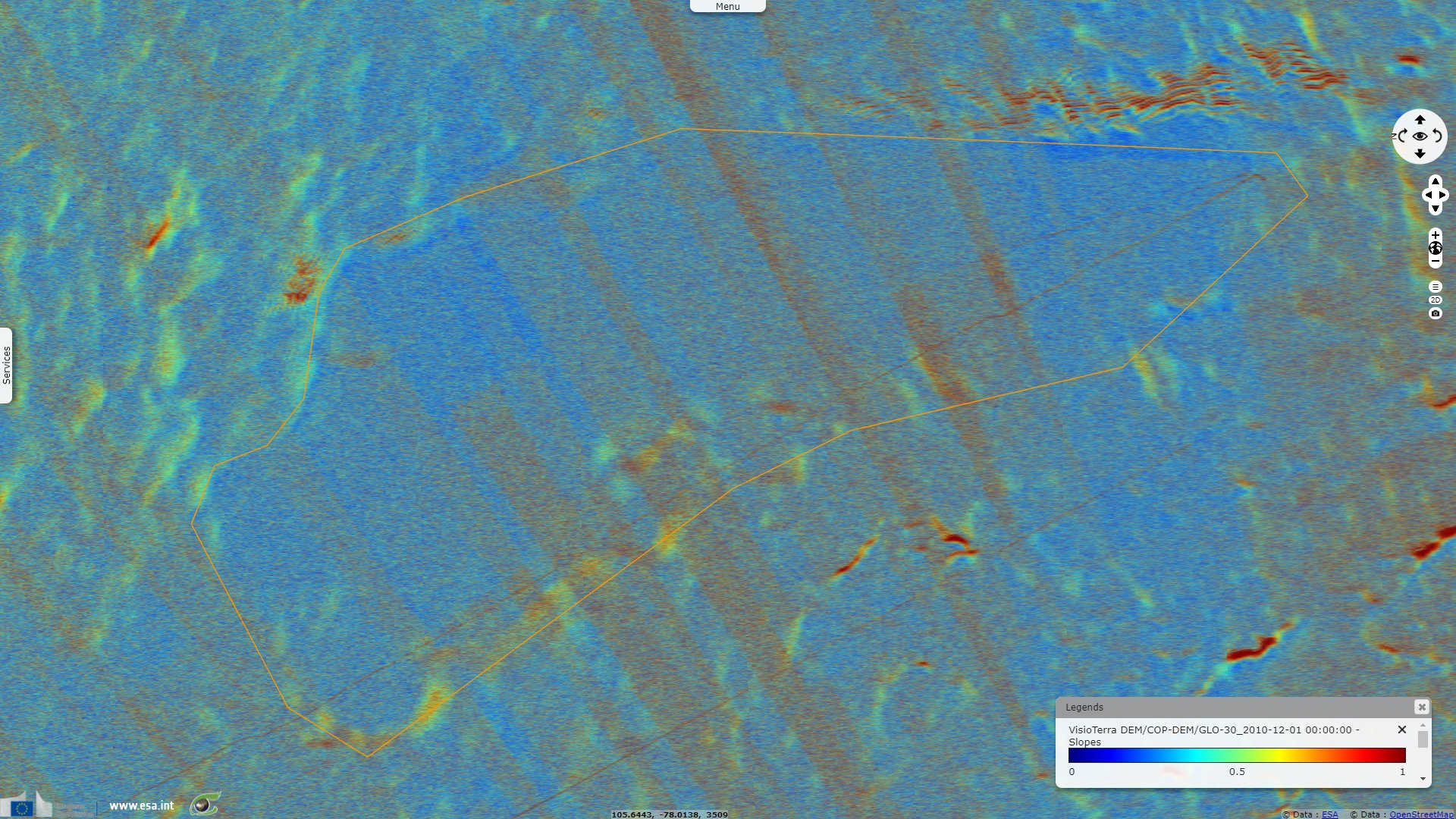 "The heat of Earth's core is slowly leaking out to space. In Antarctica, though, this heat loss is stymied by an insulating barrier: an ice sheet weighing billions of tons. The top of the ice is very cold indeed. The bottom, gently heated from below, is in some places warm enough to melt and collect as liquid water in pools or lakes." "In 1991, Jeff Ridley, a remote-sensing specialist with the Mullard Space Science Laboratory at University College London, directed a European satellite called ERS-1 (the first long-duration civilian radar) to turn its high-frequency array toward the center of the Antarctic ice cap. It confirmed the 1974 discovery: a flat plain at 105 degrees east by 77 degrees south - a glacial dimple nearly 240 kilometres long, with Vostok station at the southern end."
Fig. 4 - ERS (02.02.1996 -> 09.02.1996) - View of Lake Vostok by ERS, the satellite that confirmed the existence of the lake - 3D View. 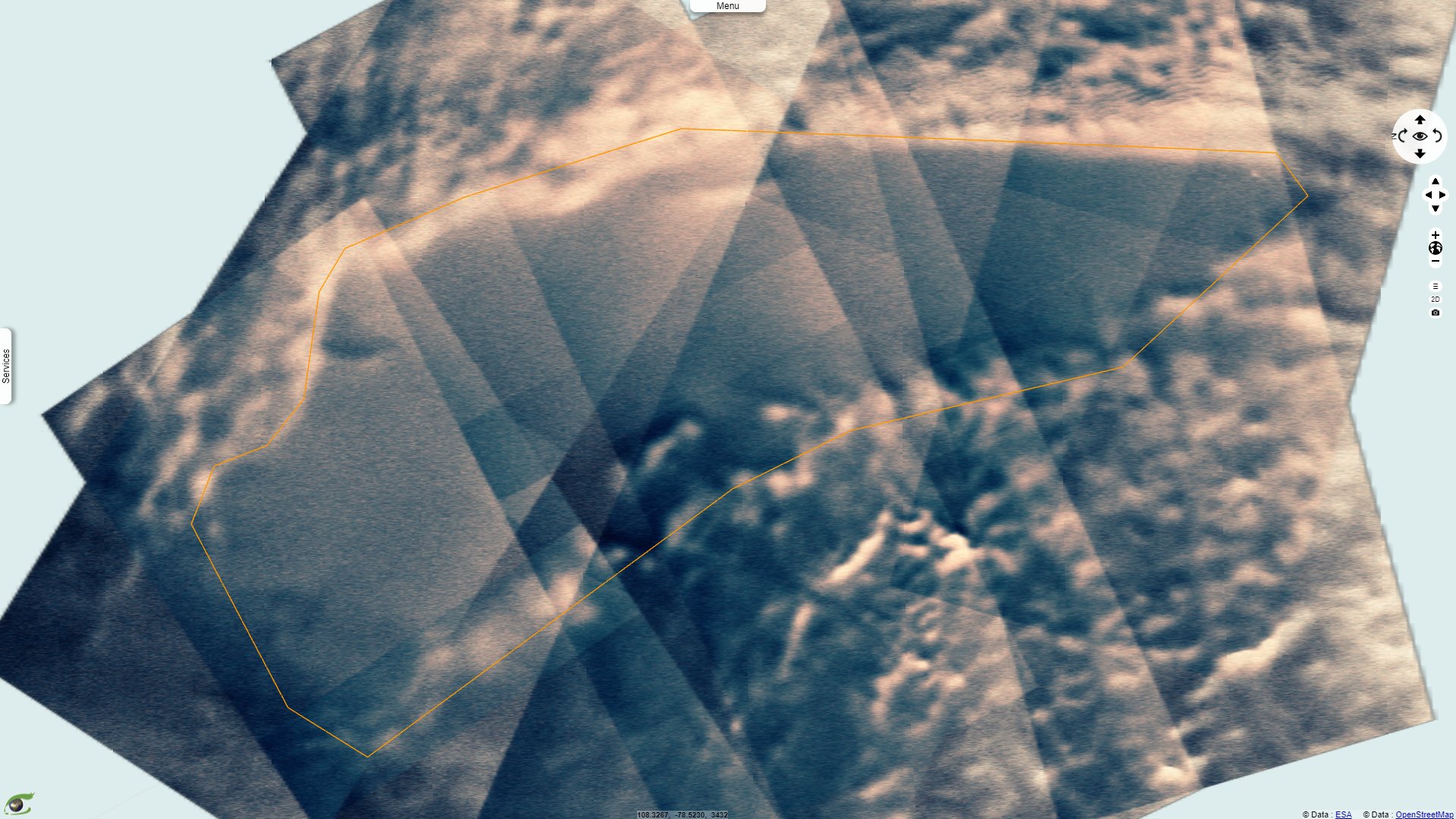 In the southern hemisphere, the Pole of Cold is currently located in Antarctica, at the Russian (formerly Soviet) Antarctic station Vostok at 78°28′S 106°48′E. On July 21, 1983, this station recorded a temperature of −89.2°C. This is the lowest naturally occurring temperature ever recorded on Earth. Vostok station is located at the elevation of 3488 m above sea level, far removed from the moderating influence of oceans (more than 1000 km from the nearest sea coast), and high latitude that results in almost three months of civil polar night every year (early May to end of July).
Fig. 5 - Envisat ASAR (12.11.2005 -> 15.12.2005) - Due to its large wide swath, ASAR could image the whole lake in either polarisation - 3D View. 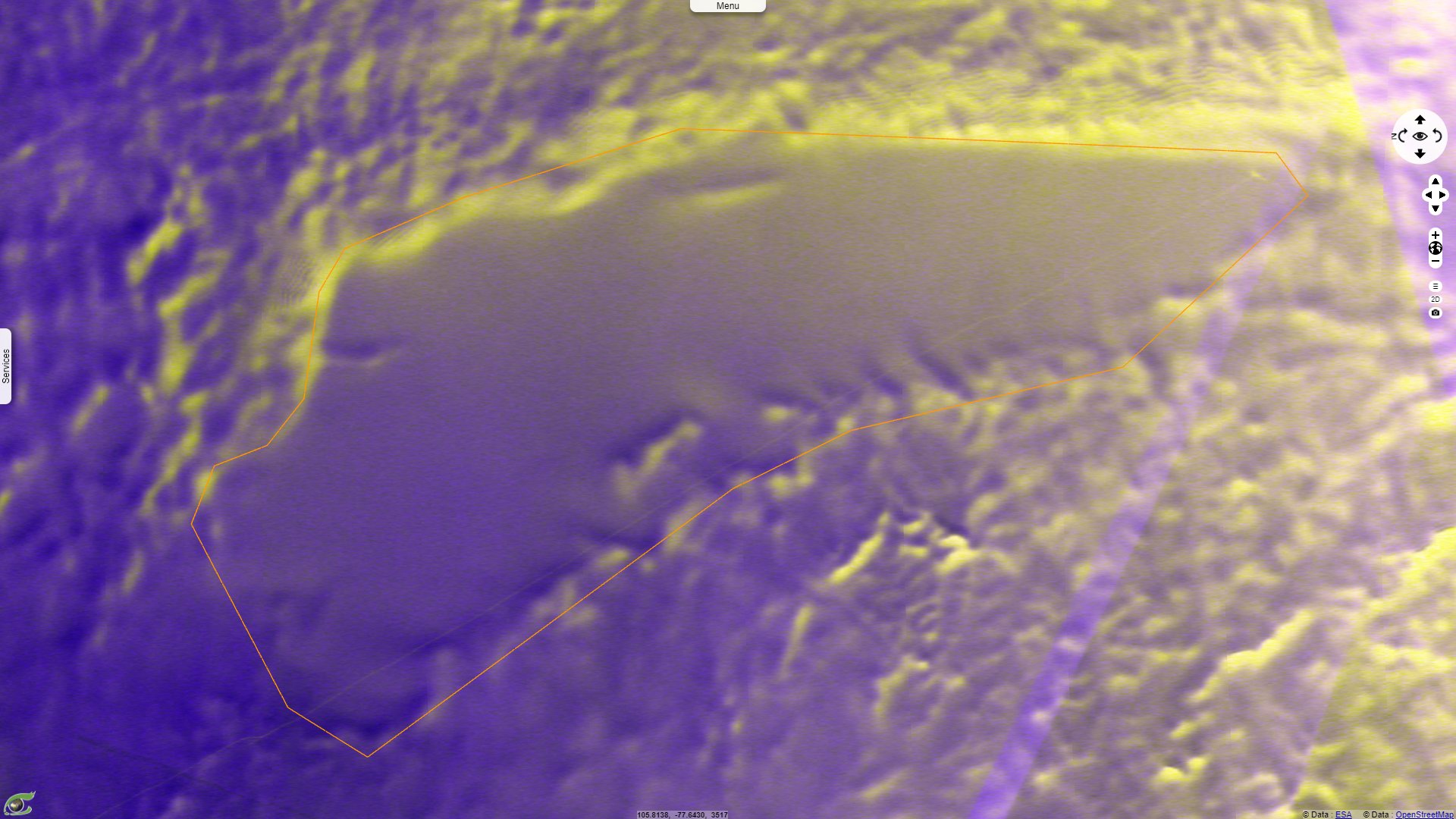 Dr David Whitehouse explains its relevance: "It is positioned at the south geomagnetic pole and as such is in a good place to observe changes in the Earth's geomagnetic field. Ice cores drilled into the lake cap have revealed remarkable data about the Earth's past climate and scientists suspect the lake itself, cut off from the biosphere for millennia, may contain unusual lifeforms. The station usually houses 25 scientists and engineers in the summer and 13 over the winter."
Fig. 6 - S1 (12.07.2015 -> 23.05.2019) - The coverage of the lake surface by Sentinel-1 is almost complete.
3D view 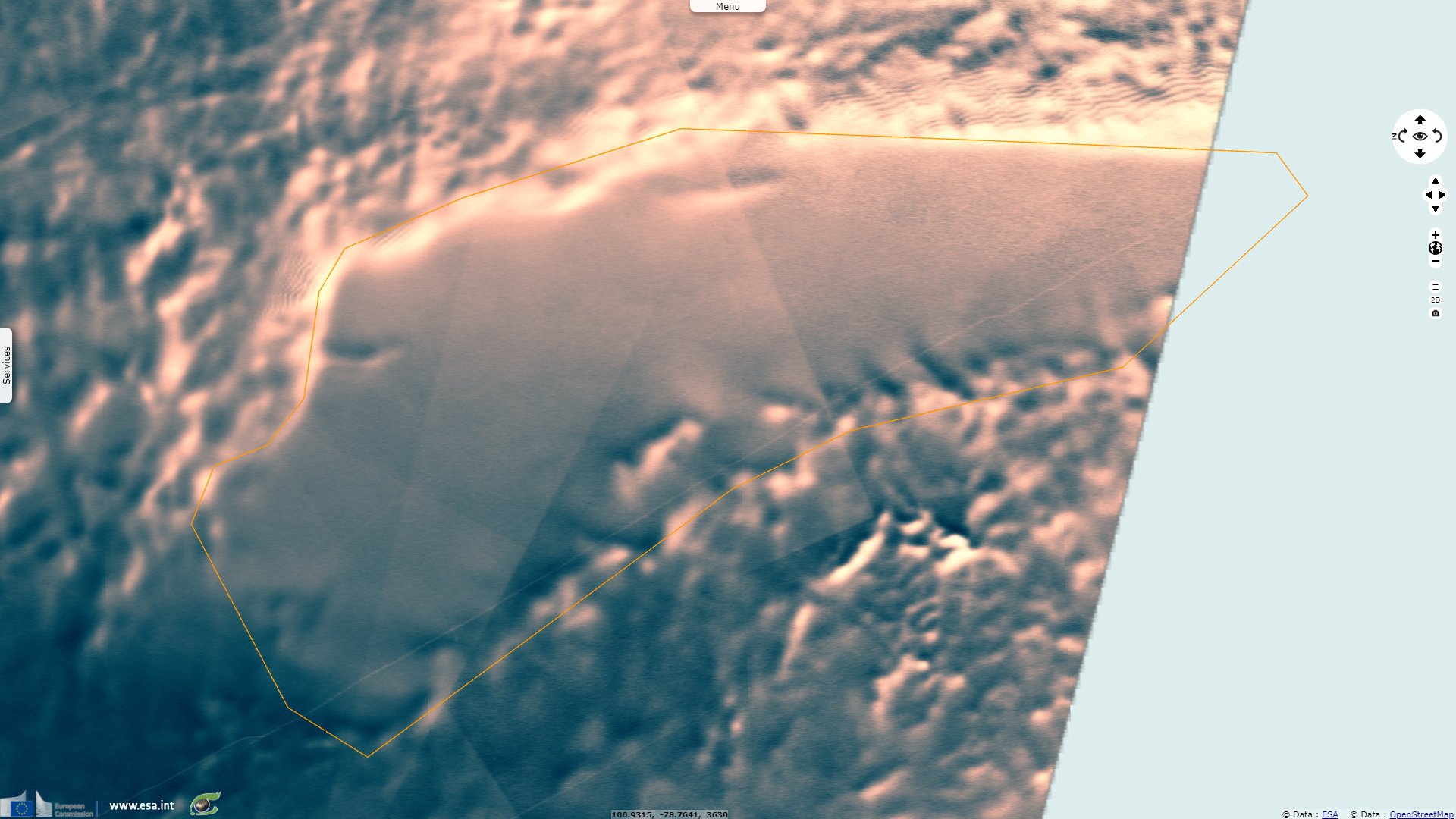 Wired continues: "The ice below Vostok station is a history book, with each core a vertical record of prevalent conditions at a particular point in time: the amount of dust in the atmosphere, the levels of trace gases, even the weights of the water molecules themselves, which provide hints to major climatic events. The ice cores scientists had been pulling up told the story of four 100,000-year cycles, a century of the world's climate in each yard."
Fig. 7 - S1 (01.12.2016 -> 13.09.2017) - The cross polarisation seems effective at discriminating surrounding slopes.
3D view 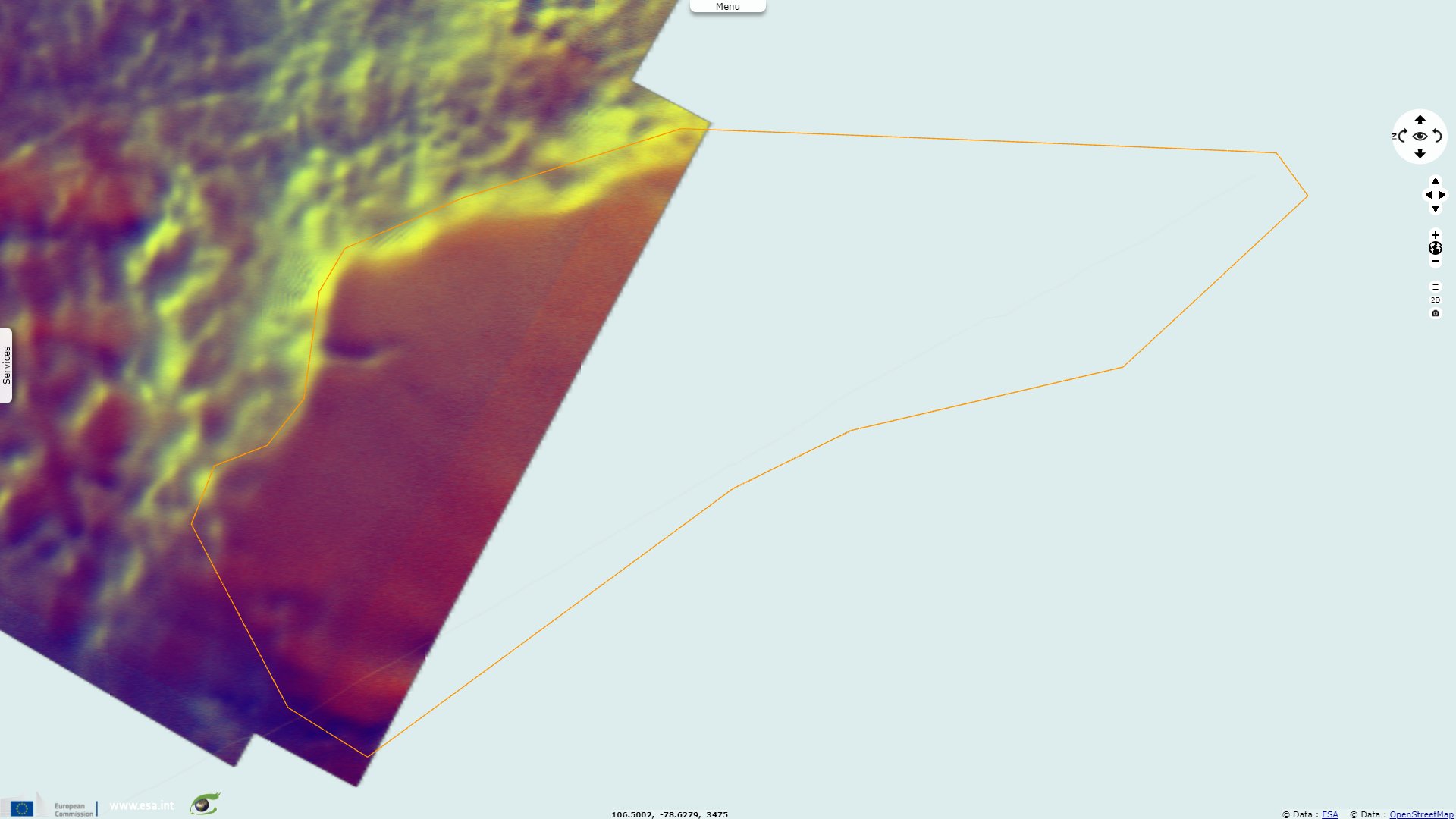 "But there weren't going to be any photosynthesizing mats in Vostok's darkness 4 kilometres down. The water would be colder than in the shallow surface lakes, and the pressure immense. That didn't mean there could be no life. Assuming Vostok had once been a surface lake before ice covered the continent, organisms from that ecosystem might have found a way to survive. If that were the case, scientists would be looking at the ultimate biological time capsule - one that dates back 30 million years. The organisms' origins - and their adaptations to a weird world of cold, dark scarcity - made them the most tempting of targets for study."
Fig. 8 - S3 SLSTR (03.01.2019) - Most slopes surrounding the lake are visible on SLSTR, delineating the lake owing to the illumination angle.
3D view 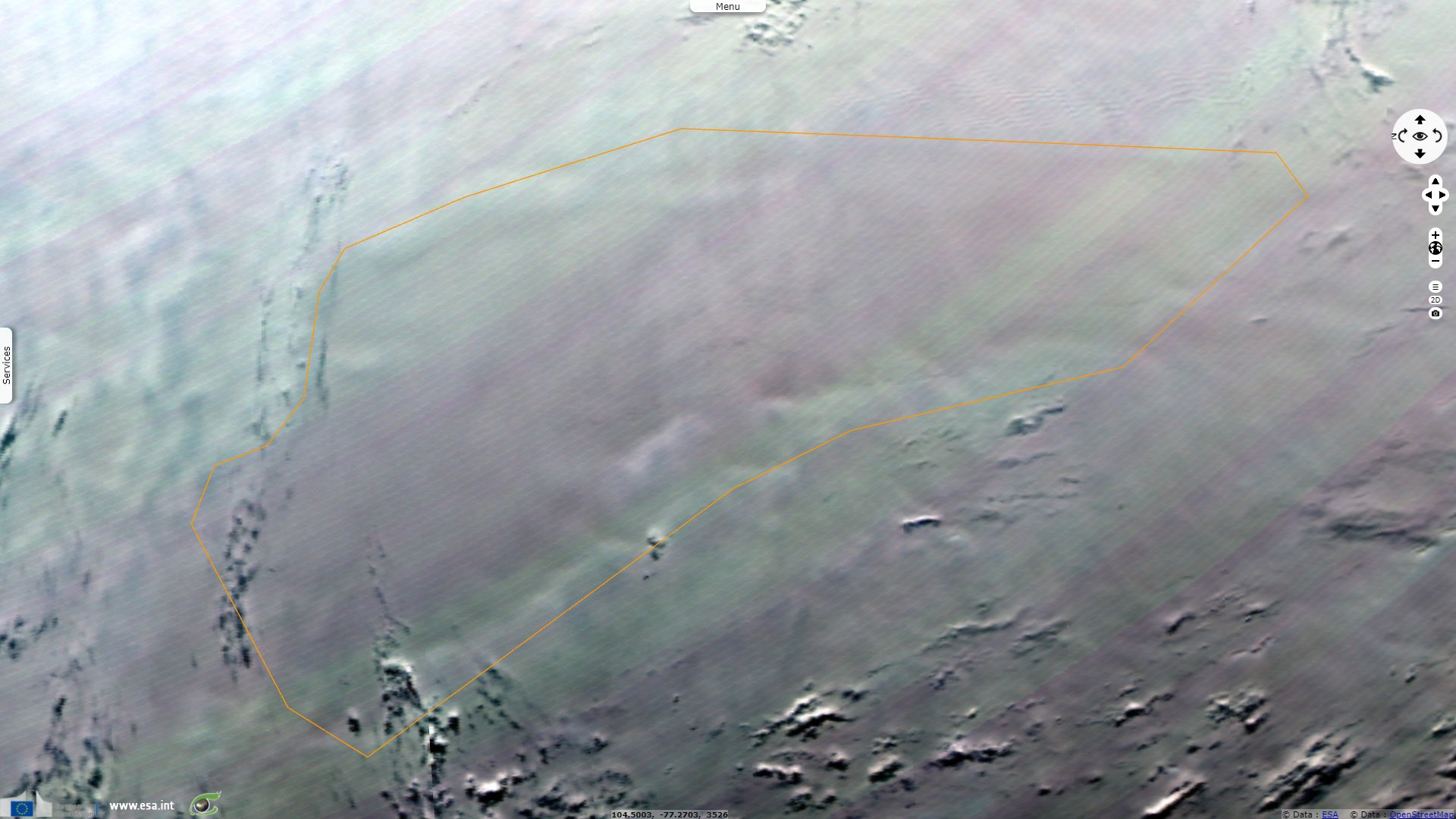 "The pressure at the bottom of the ice sheet would squeeze any borehole shut unless it was filled with a nonfreezing fluid - in practice, dirty kerosene. Putting a borehole like that through the ice and into the lake would create a miniature Exxon Valdez, releasing toxic fluids in what could well be one of the most delicate, perfectly preserved ecosystems on Earth." There is also interest in using the exploration of Lake Vostok as a proxy to the exploration of the Jovian moon Europa and what there is beyond its layer of ice.
Fig. 9 - S3 SLSTR (03.01.2019) - This thermal view near the austral summer solstice allows discriminating the land on top of the lake from its surrounding.
3D view 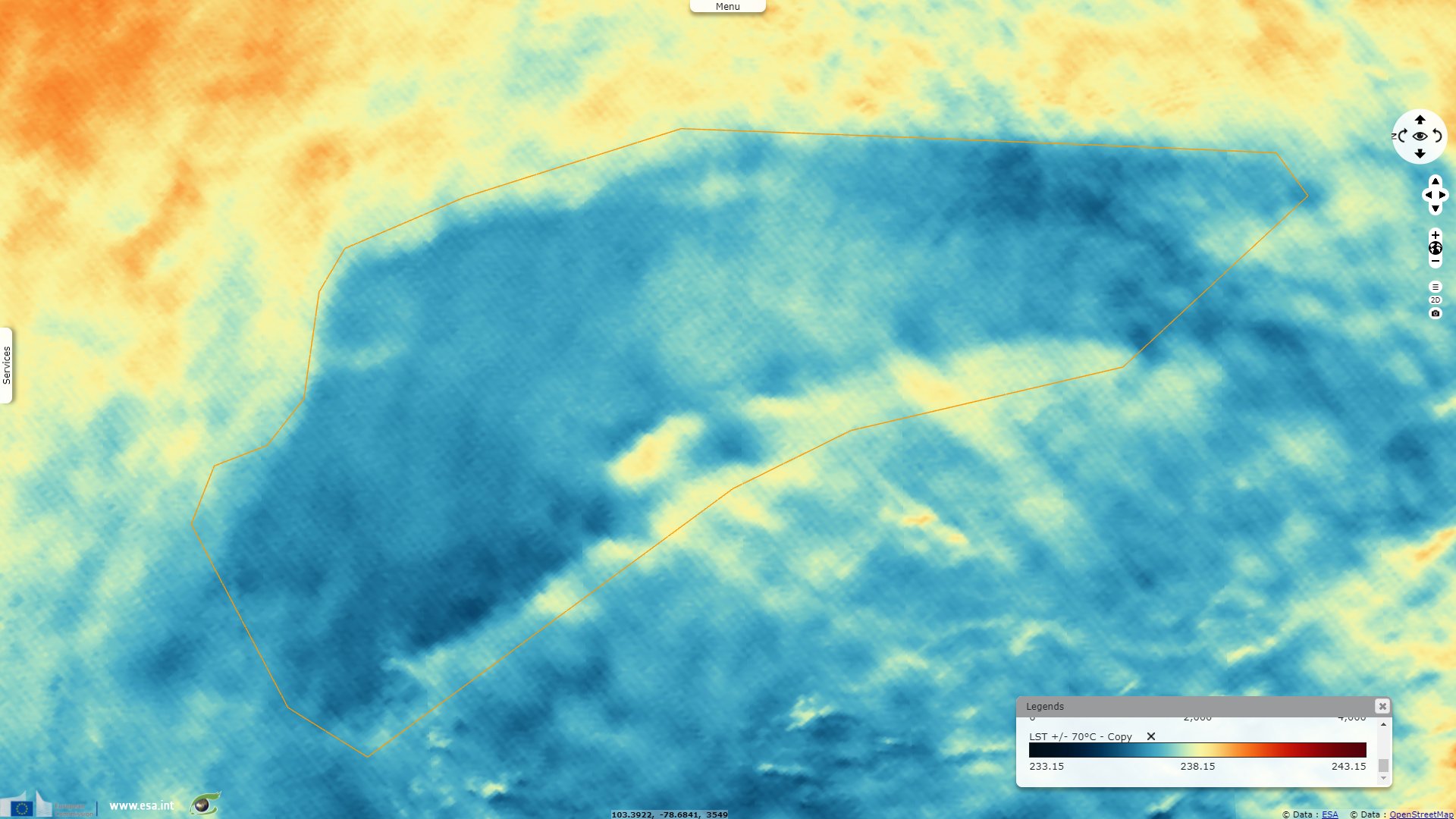 As explained by Katia Moskvitch for the BBC, the will to explore the lake is tempered by risks: "some experts remain concerned that probing the lake's water - thought by some to be isolated from everything else on Earth - could contaminate the pristine ecosystem and cause irreversible damage. The sub-glacial lake is located underneath the remote Vostok station in Antarctica. Overlaid by nearly 4 km of ice, it has been isolated from the rest of the world for millions of years. Some scientists think the ice cap above and at the edges has created a hydrostatic seal with the surface, preventing lake water from escaping or anything else from getting inside."
Fig. 10 - COP-DEM 30 - At south-east, road and airway of the Russian scientific base of Lake Vostok.
3D view 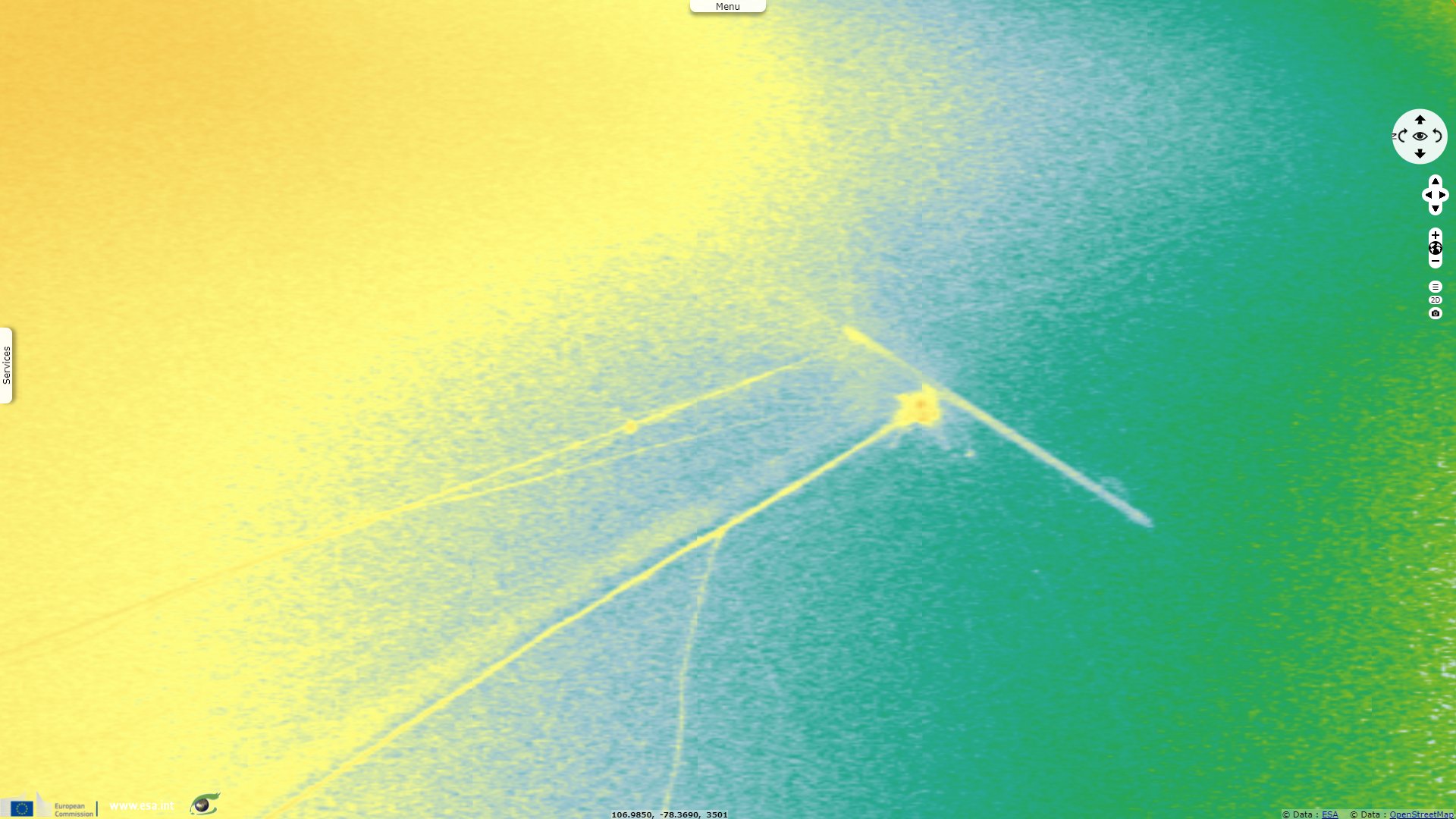 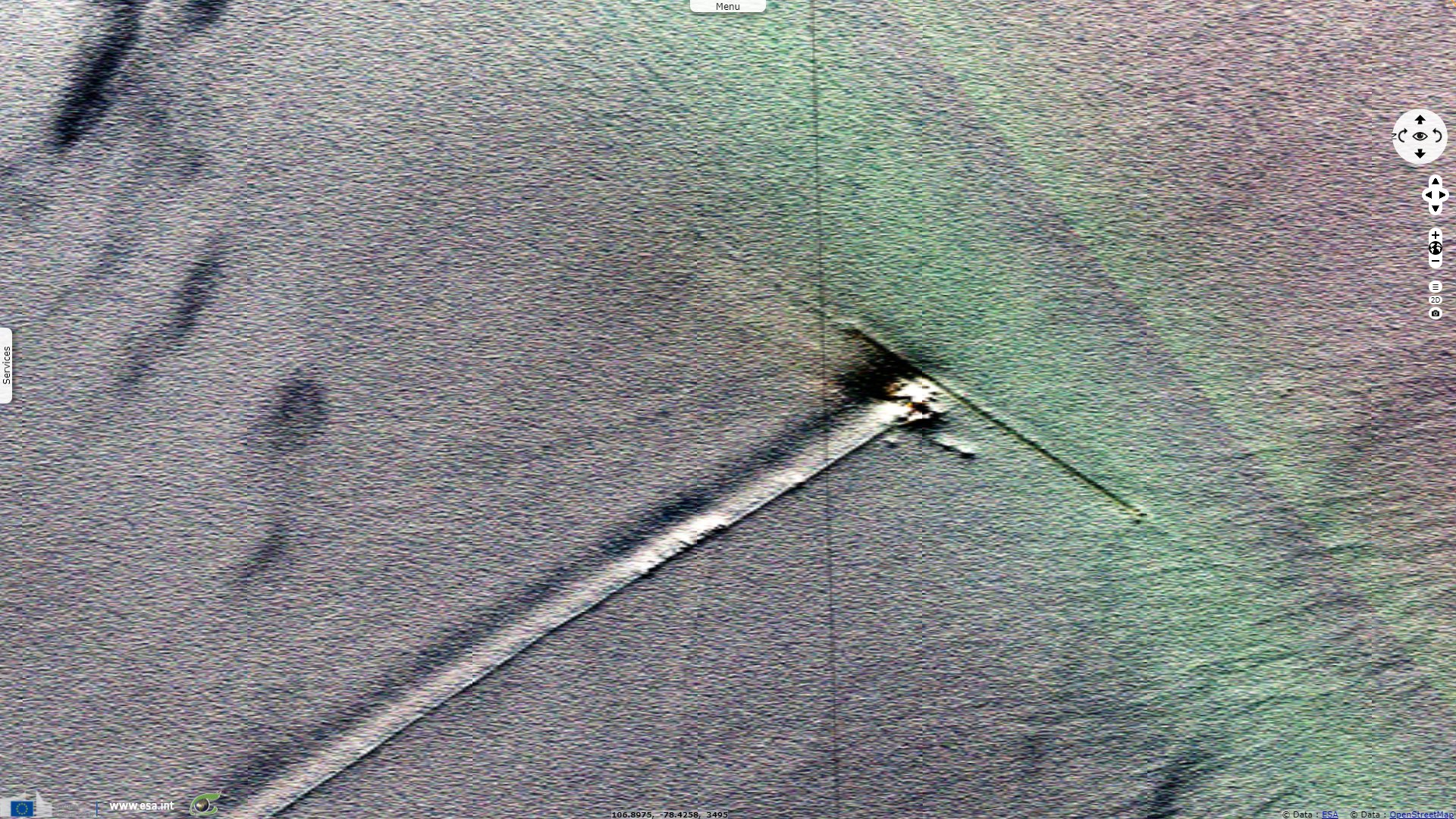