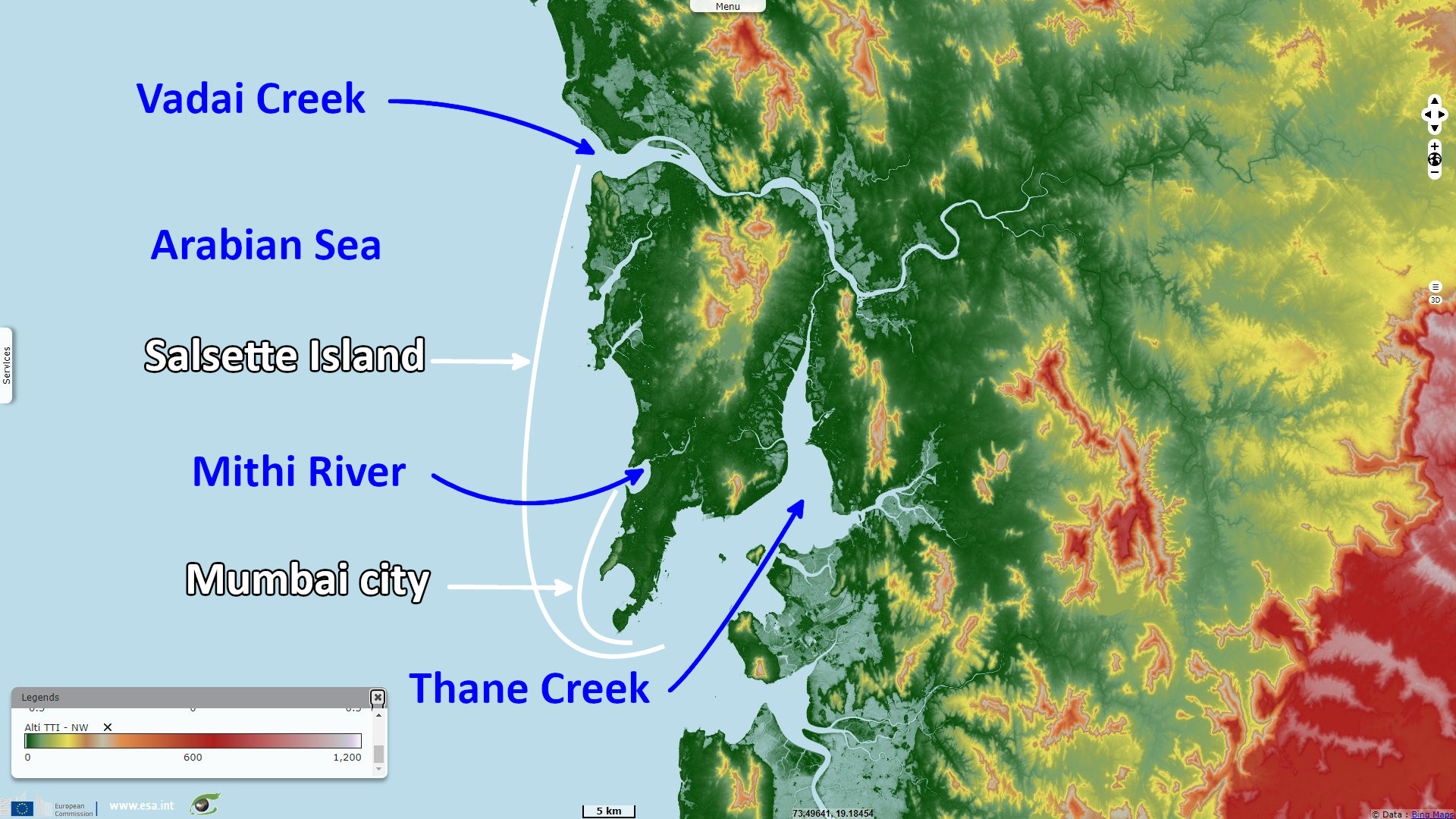 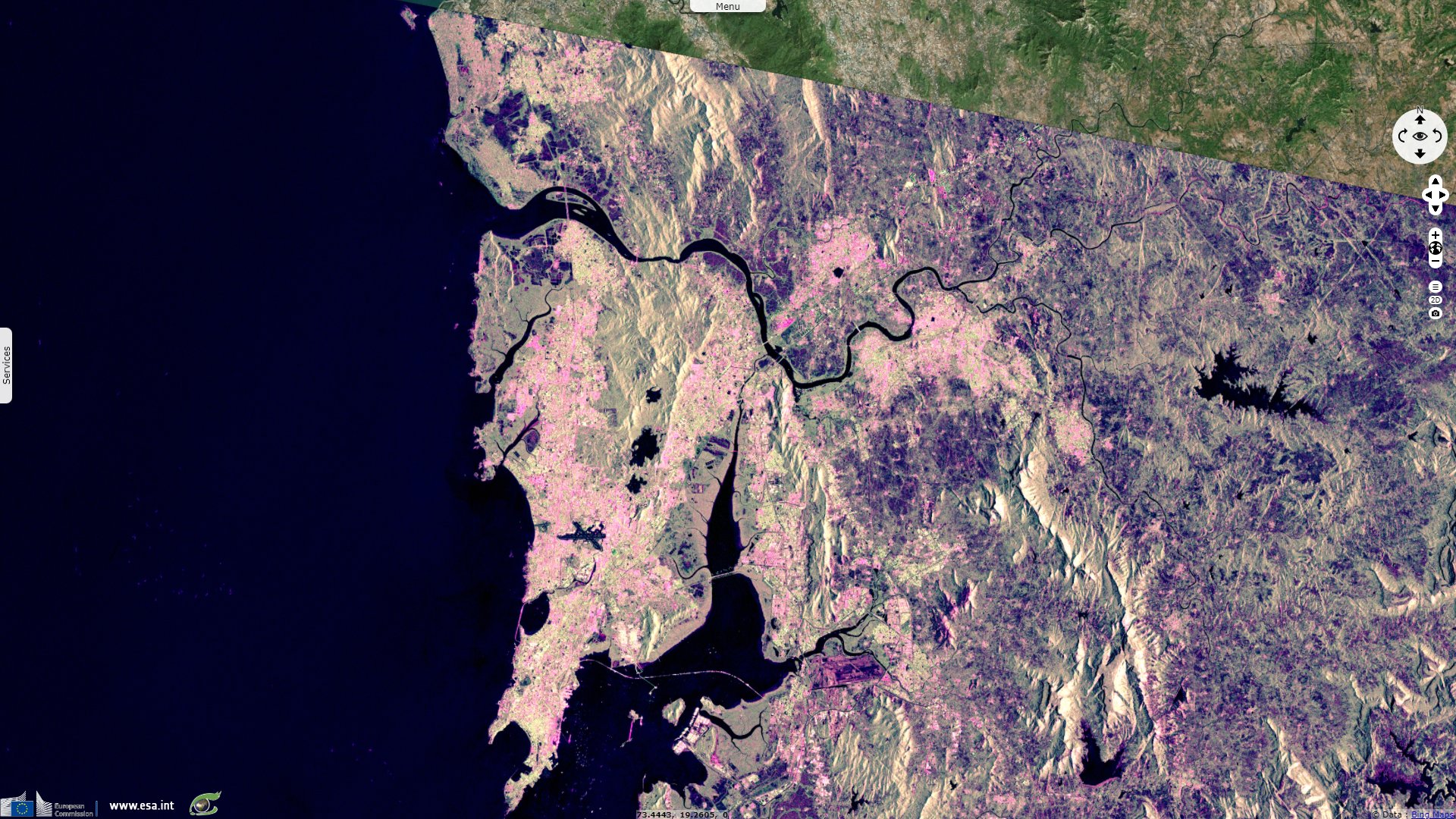 Mumbai is the financial, commercial, and the entertainment capital of India. It is also one of the world's top ten centres of commerce in terms of global financial flow, generating 6.16% of India's GDP, and accounting for 25% of industrial output, 70% of maritime trade in India, and 70% of capital transactions to India's economy. Mumbai has the eighth-highest number of billionaires of any city in the world. The city houses important financial institutions and the corporate headquarters of numerous Indian companies and multinational corporations. The total area of Mumbai is 603.4 km². Of this, the island city spans 67.79 km², while the suburban district spans 370 km², together accounting for 437.71 km² under the administration of Municipal Corporation of Greater Mumbai. According to the 2011 census, the population of Mumbai city was 12 479 608. The population density is estimated to be about 20 482 persons per square kilometre. The Mumbai Metropolitan Region which includes portions of Thane, Palghar and Raigad districts in addition to Greater Mumbai, covers an area of 4355 km². Many parts of the city lie just above sea level, with elevations ranging from 10 m to 15 m; the city has an average elevation of 14 m. Property prices in South Mumbai are by far the highest in India and among the highest in the world.
Fig. 3 - Landsat-5 (19.03.1988) - Vegetation Index on this area in March 1988.
3D view 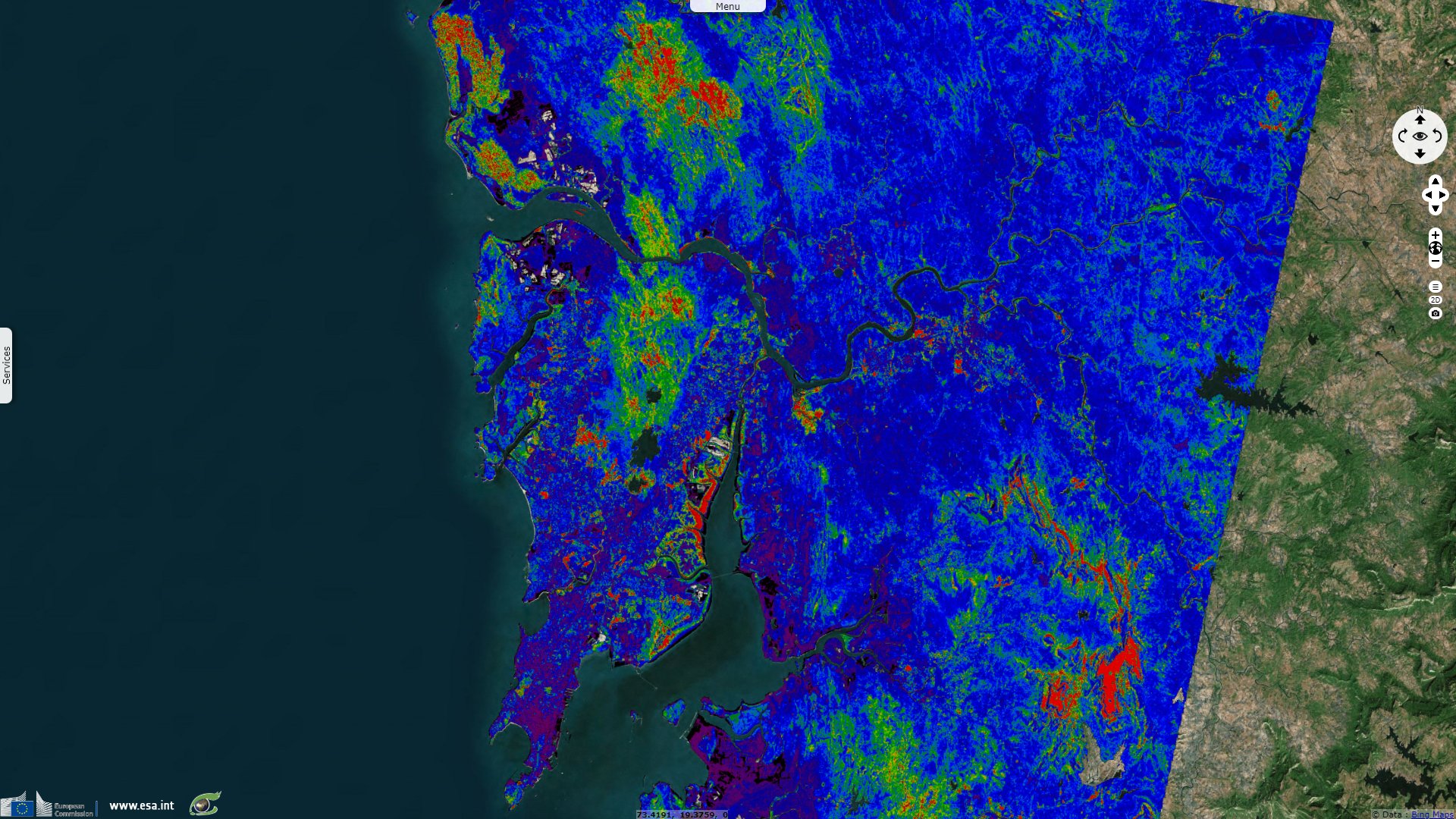 Helena Kamper of the Borgen Project explains the importance of slums in Mumbai:
Fig. 4 - Sentinel-2 (18.03.2022) - Compared view 34 years later, the area occupied by vegetation seems to have decreased.
3D view 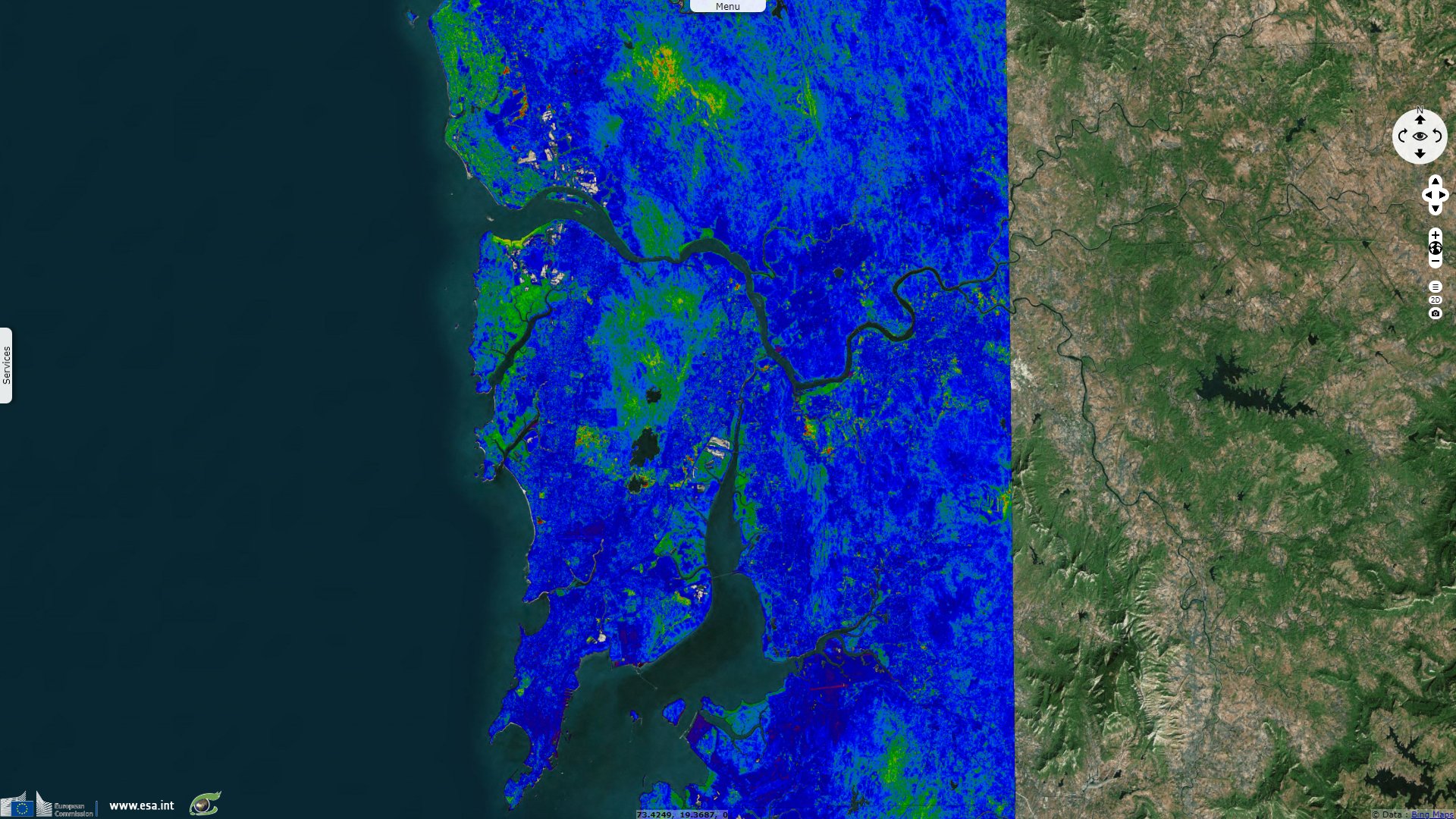 On 7 February 2022, Vaishnavi Chandrashekhar published in the Atlantic an article dedicated to the flooding hazard in Mumbai: "In the geography of climate risk, some places are more vulnerable than others, and coastal megacities like Mumbai face the combined threat of rising sea levels and extreme weather events. As their populations expand—by 2050, most of the world’s people will live in urban areas—the paving over of permeable soil for houses and roads further increases the risk of flooding. Like the rest of India, Mumbai is no stranger to what headline writers like to call 'monsoon fury.' The city receives an average of about [238 cm] of rain annually, more than double New York’s rainfall, and most of it arrives during the four-month rainy season."
Fig. 5 - Landsat-5 (19.03.1988) - Mumbai and its greater metropolis, the mangroves show in dark green in coastal areas.
3D view 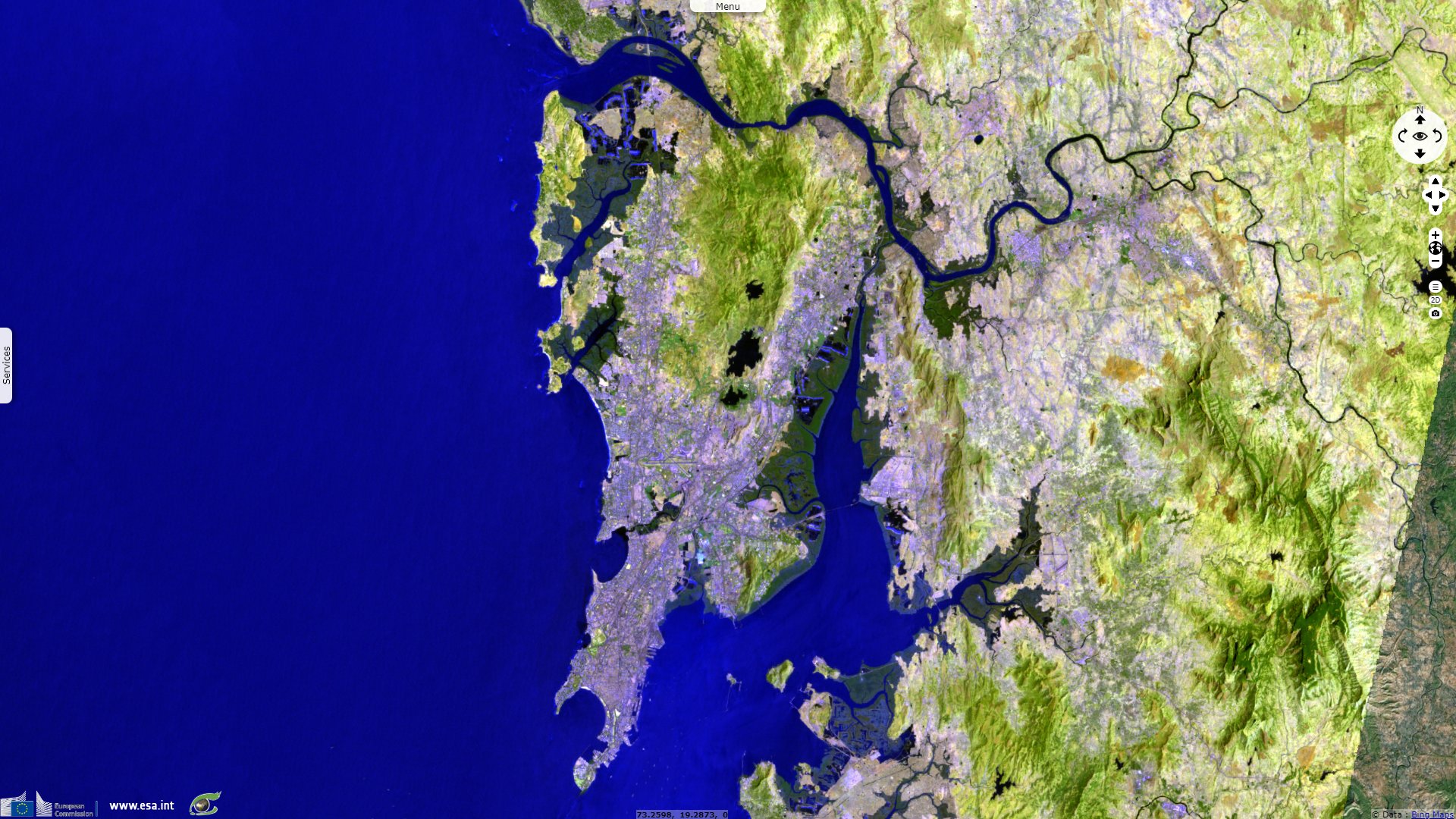 "Climate change could stretch Mumbai’s fortitude to its limits. Severe flooding used to occur once every few years. Now, intense-rainfall events occur almost every year. As the number of cyclones in the Arabian Sea increases, sea levels rise, and the city continues to sprawl over floodplains and hills—from 1991 to 2018, the city lost 58% of its already limited open space—Mumbai is routinely ranked high on lists of the world’s cities most vulnerable to climate impacts. City authorities, now finalizing a climate action plan, must confront long-standing inadequacies in housing, drainage, and sanitation, and resolve historical tensions between development interests and environmental protection. Working-class communities in hillside areas such as Surya Nagar may have to think about eventual relocation, however difficult. At every level, Mumbai is facing new dangers and new decisions. Like many coastal settlements, Mumbai stands on land hewn from water. In the 18th and 19th centuries, British colonists leveled the hills on the small islands of what is now called the Mithi River estuary, using the resulting debris to join the archipelago into a narrow peninsula on the northwest coast of India."
Fig. 6 - Sentinel-2 (18.03.2022) - The mangrove has receded in many parts of the city, often to allow urban growth.
3D view 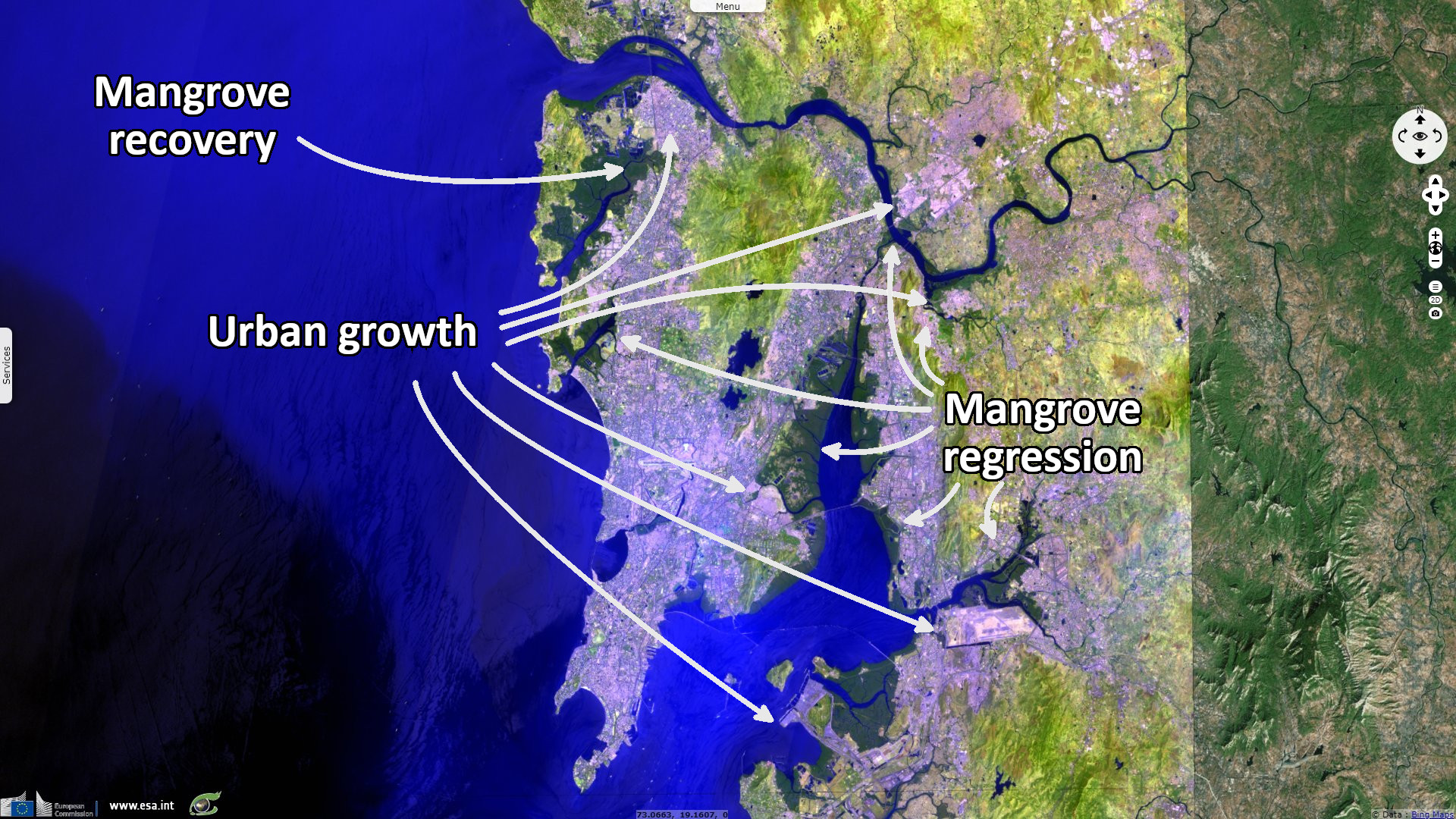 "During the 20th century, Mumbai expanded to accommodate its growing economy and population. More creeks, streams, and mangroves began to vanish under roads, buildings, and sewage. But every year, the rivers reminded the city of their existence. From June to September, the southwest monsoon sweeps up the west coast of India and into the hinterlands, filling lakes and reconnecting rivers with the sea. For Mumbai, one of the world’s most crowded cities, the season’s cool, clean air and leafy shade is a relief—but it’s also a warning, especially in neighborhoods where the tides once flowed."
Fig. 7 - Landsat-5 (19.03.1988) & Sentinel-2 (18.03.2022) - NW of Mumbai, some cropland seems have been converted back to mangrove.
3D view 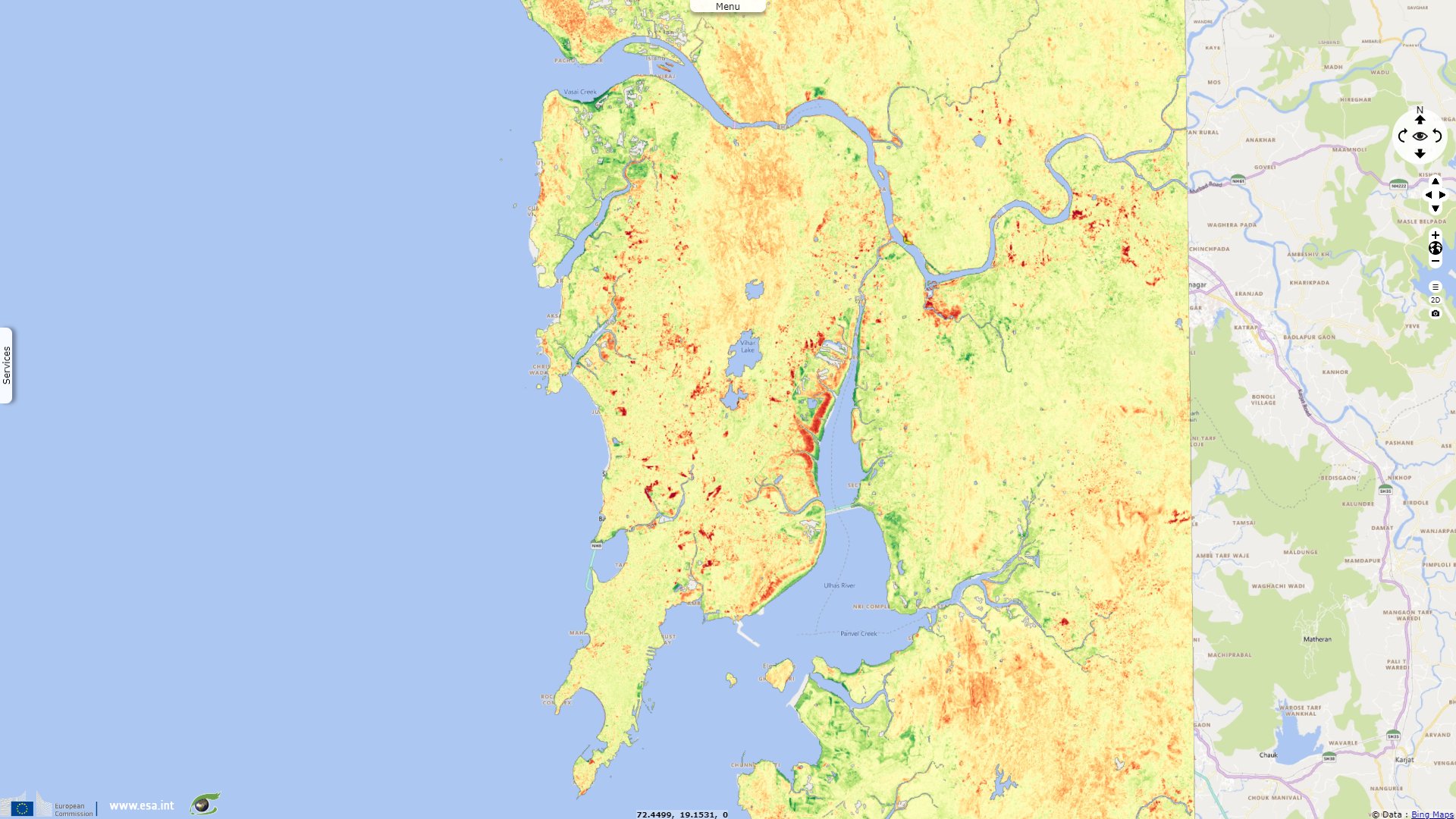 "The problems started when the regional planning agency reclaimed hundreds of acres of mangrove-covered floodplains downstream and covered the newly elevated land with glass-and-steel office complexes. Then airport authorities extended the airport’s runways, narrowing and bending the Mithi River. More settlements and small factories rose along the riverbanks, their sewage and effluent further choking the river’s flow. More recently, the city raised the main road near Kranti Nagar, creating a steep slope to the riverbank settlements."
Fig. 8 - Sentinel-2 (18.03.2022) - Zoom on the western area of Mumbai, many slums are visible.
2D view 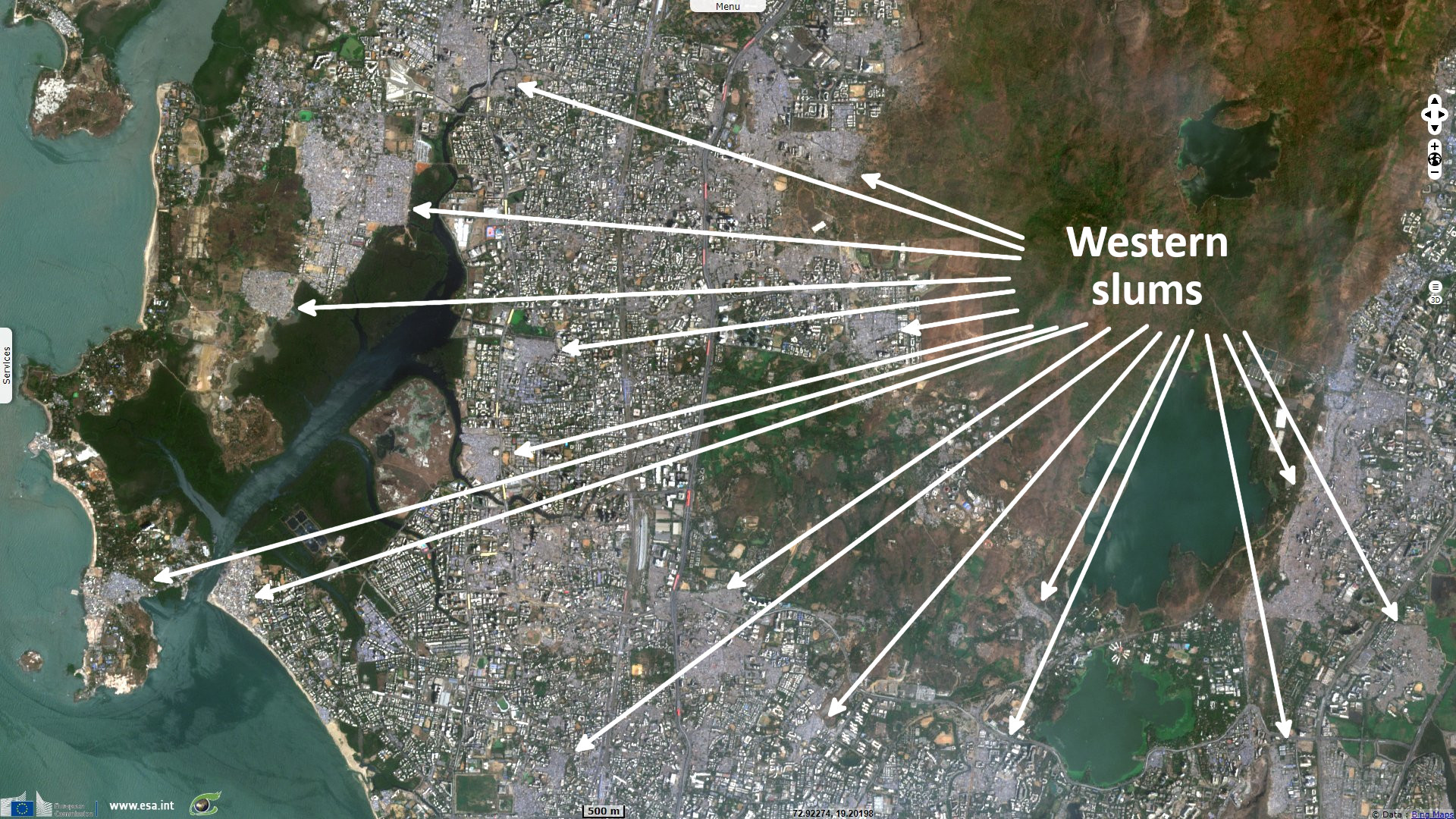 "From 2001 to 2019, rising ocean temperatures led to a 52% increase in the region’s cyclone frequency and a 150% increase in the number of very severe storms, while cyclone duration increased by 80%. Mumbai has not suffered a serious hit from a cyclone since 1948, but a few storms have recently come close. For reasons scientists don’t fully understand, the monsoon season is also ending later, meaning that city residents must stay vigilant into the fall."
Fig. 9 - Sentinel-2 (18.03.2022) - At south of Mumbai, many slums count hundred of thousand inhabitants, in particular along Mithi River.
2D view 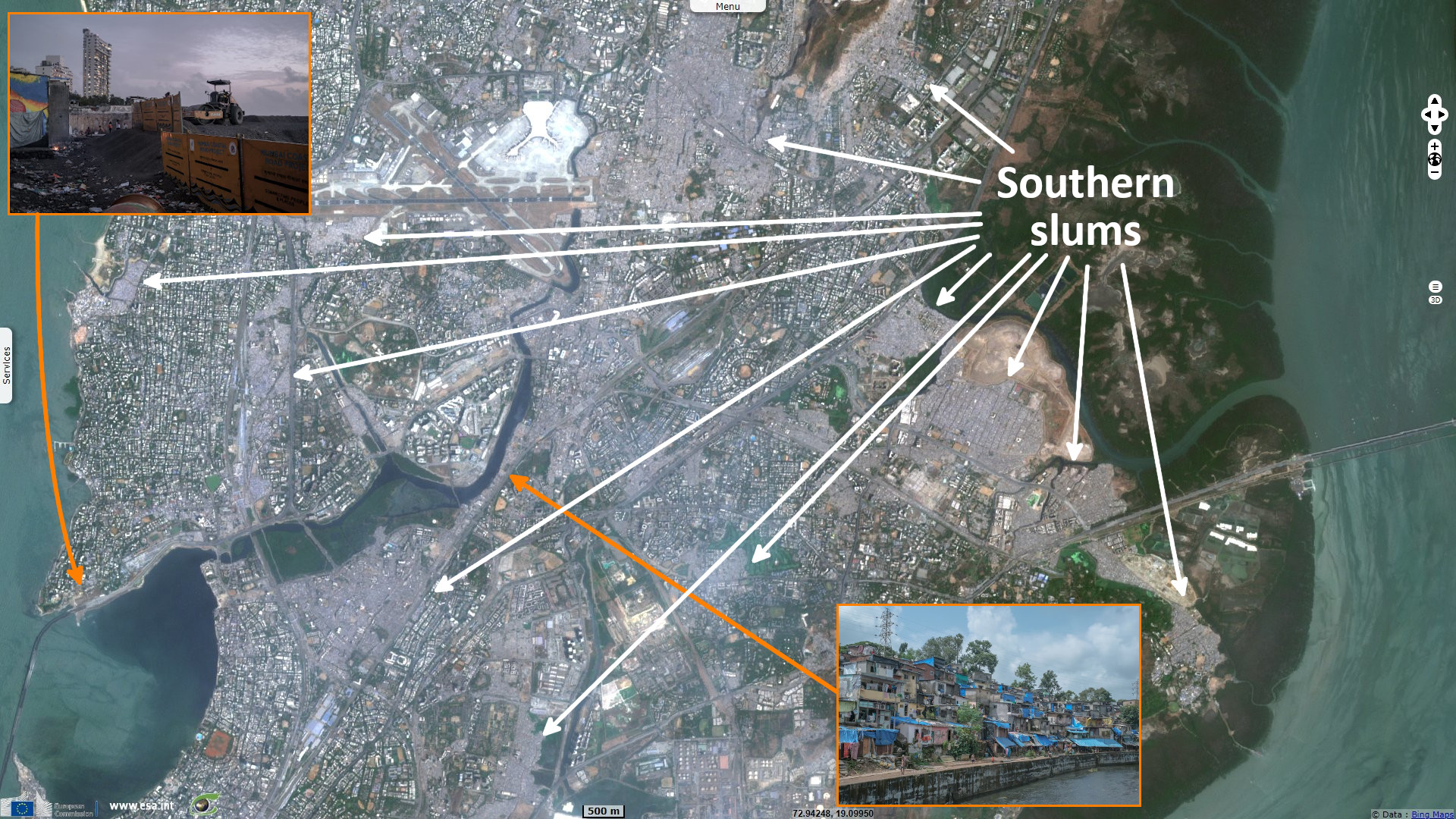 "On july 26, 2005, three feet of rain fell on Mumbai, taking more than a thousand lives in flash floods and landslides and causing millions of dollars in damages. In many areas, residents were rescued from rooftops and couldn’t return home for days. Though flooding had been increasing for a decade, the deluge awakened Mumbaikars to the geography of their city—its hemmed-in streams and rivers and its vulnerability to the tides—and the dangers of the monsoon. Flooding in the area started in the ’80s and ’90s when settlements and residential buildings replaced mangrove stands along the shore, reducing the capacity of the land to drain water. In the 2000s, the problem was aggravated when the city raised the main road, increasing water flow into the Balsavars’ property. Some ground-floor residents in the area have left, while others hope to add extra floors to their building."
Fig. 10 - Sentinel-2 (18.03.2022) - Less slums are visible in the eastern part of Mumbai bordering Thane Creek
2D view 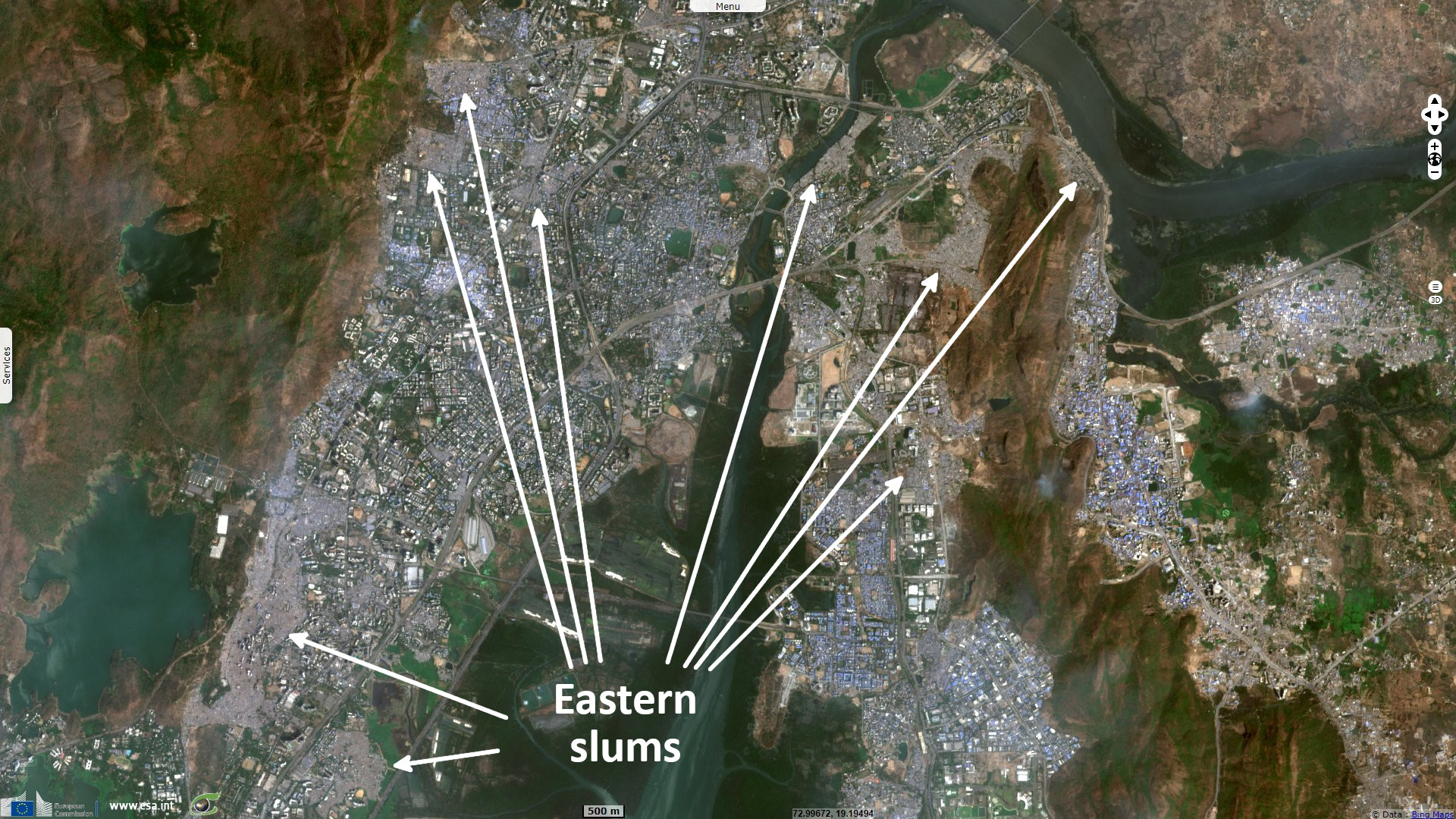 "Throughout western India, extreme-precipitation events increased threefold from 1950 to 2015 due to an increase in atmospheric moisture from a warming Arabian Sea. Research suggests that the short bursts of extreme rain that trigger flash floods and landslides will continue to increase as temperatures rise. The city itself may amplify these trends: Local scientists have found that clusters of concrete structures generate warmer temperatures and atmospheric instability that could be intensifying monsoon rainfall."
Fig. 11 - Landsat-5 (19.03.1988) - At south of Mumbai, an area dedicated to agriculture in 1988.
2D view 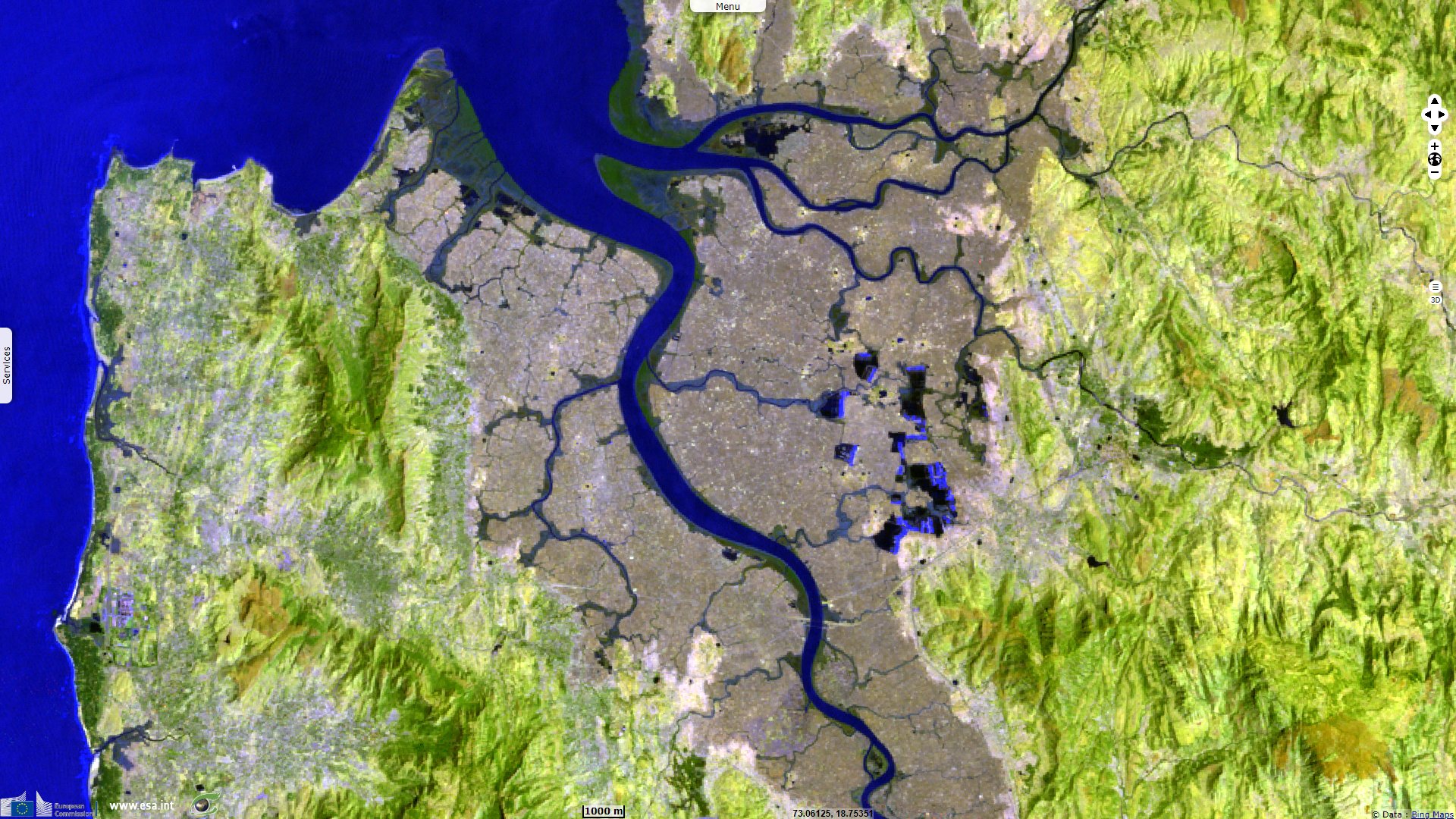 "Since 2005, civic authorities have spent more and more money on flood-mitigation measures, largely due to prodding from citizens’ groups and judicial orders. In recent years, they’ve begun installing floodgates and pumping stations along parts of the seashore—only six of the city’s 174 stormwater outfalls lie above the high-tide line, so when heavy rain combines with high tide, gates are needed to stop tidal inflow and pumps must physically push rainwater out. Authorities have also set up smaller water pumps along parts of the Mithi River and are experimenting with large underground tanks designed to catch and store water below one of the city’s lowest-lying areas."
Fig. 12 - Sentinel-2 (18.03.2022) - View 34 years later, mangroves have recovered in several areas.
2D view 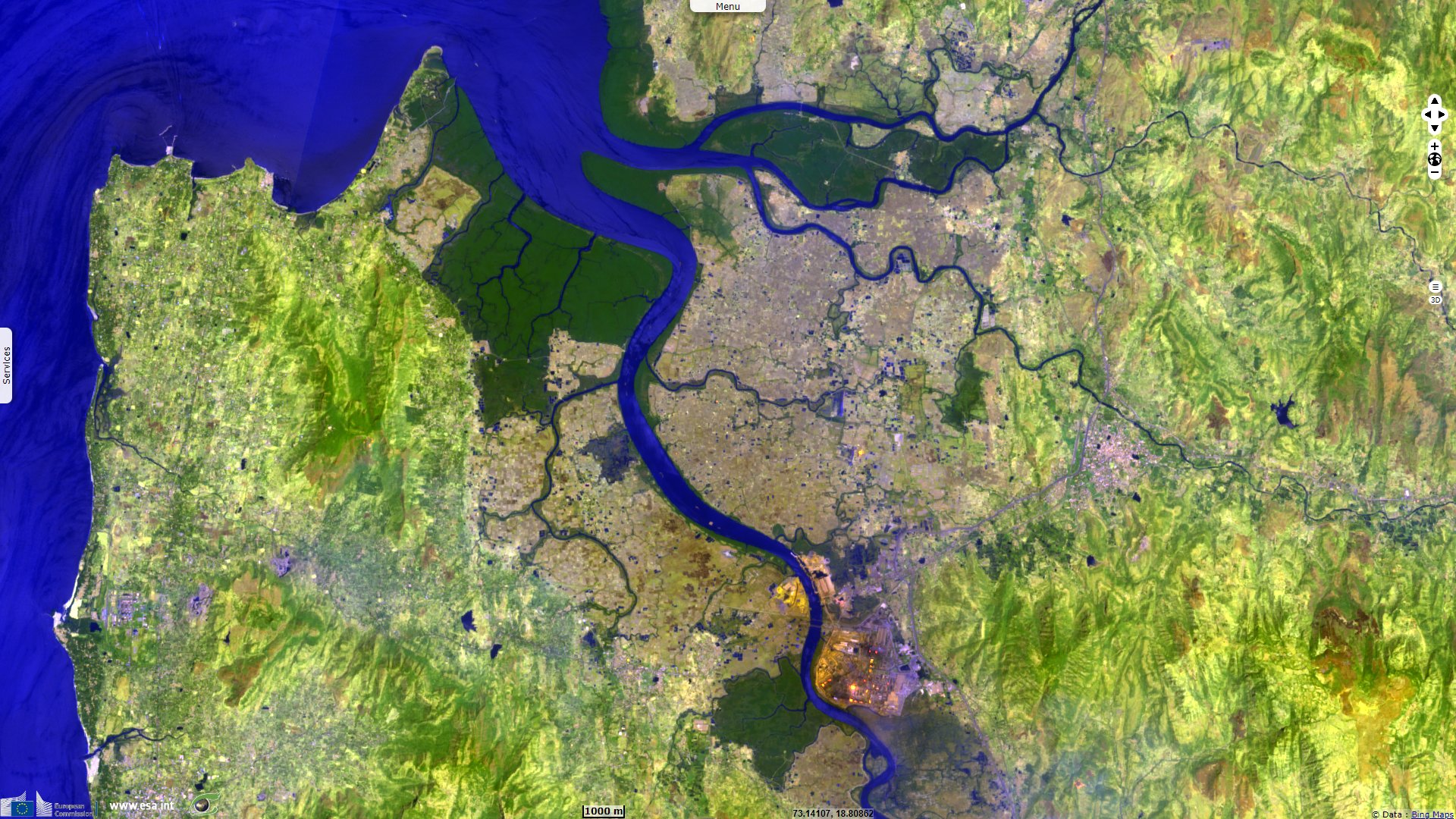 "After the 2005 disaster, for instance, a high-level state-government committee laid out a series of measures for mitigating floods. Although the city implemented engineering solutions such as pumps, drains, and retaining walls, the recommendations that carried even short-term costs for development interests—such as flood-risk zoning around waterways that would affect the real-estate market—were ignored."
Fig. 13 - Landsat-5 (19.03.1988) & Sentinel-2 (18.03.2022) - It is further highlighted when computing the change in vegetation indices.
2D view 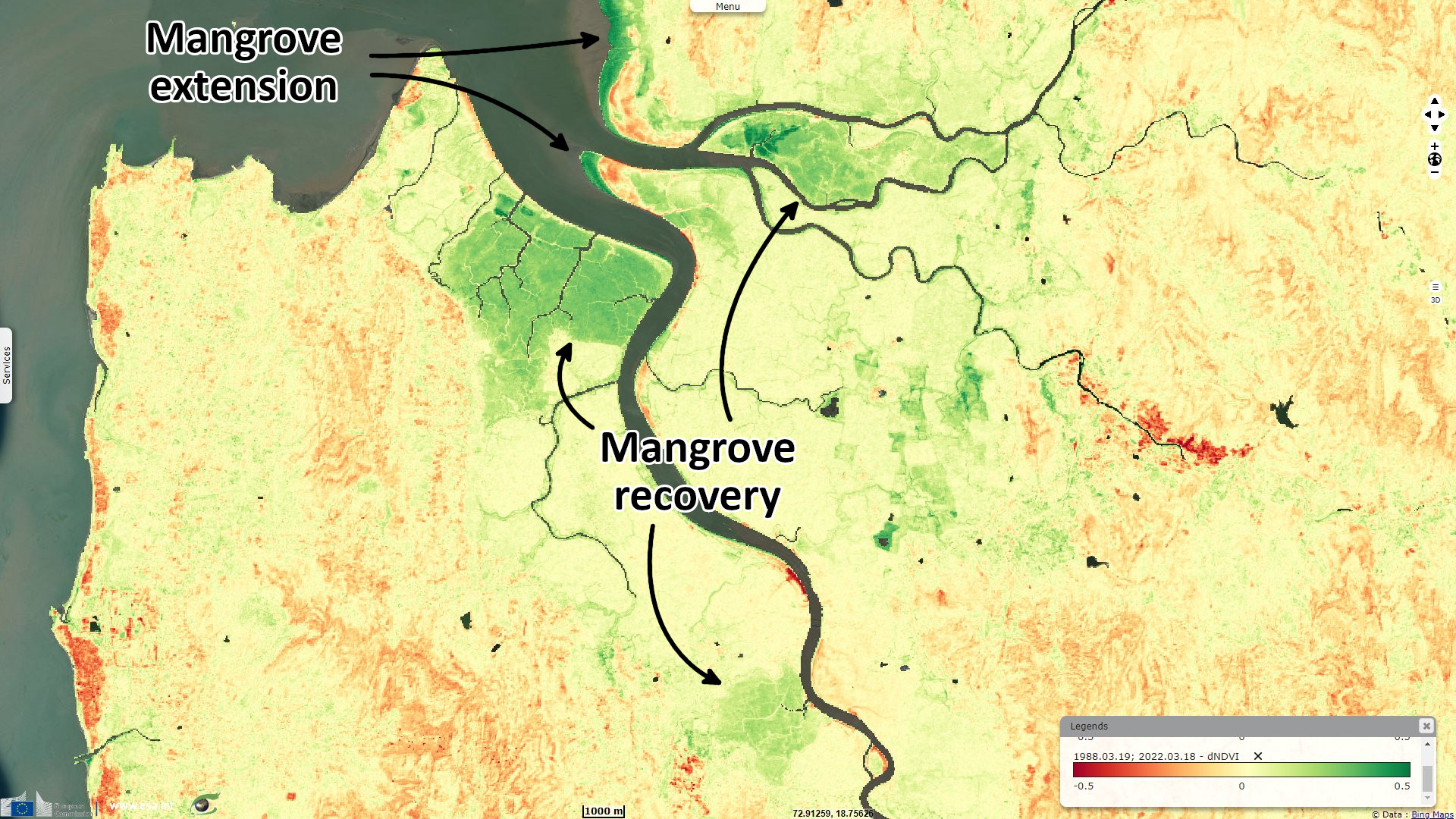 "For the people of Surya Nagar and Kranti Nagar, transformation might mean moving to safe and affordable housing elsewhere in the city. Because of the lack of affordable options, people who are evicted from hazardous neighborhoods often go and live in even more vulnerable ones, notes Roshni Nuggehalli, the executive director of YUVA, a nonprofit that works with the urban poor. Over the past few decades, the government has tried to incentivize developers to rehabilitate informal dwellings—but many of the resulting housing projects have been poorly constructed or unsanitary. 'What we need to address is not the climate event,' Nugehalli says, 'but the systemic things that aggravate the climate event.' A long-delayed plan to expand the capacity of the city’s century-old stormwater drains has been revived and updated. And the desilting and unclogging of open drains, streams, and rivers increases every year: By the end of last year’s monsoon, workers planned to remove nearly 220 000 tons of gunk from the Mithi. The city has built retaining walls along some rivers and has improved weather monitoring and disaster-response systems. Now when high tide coincides with heavy rain, evacuation alerts are issued to riverside settlements such as Kranti Nagar."
The views expressed herein can in no way be taken to reflect the official opinion of the European Space Agency or the European Union.
Contains modified Copernicus Sentinel data 2022, processed by VisioTerra.