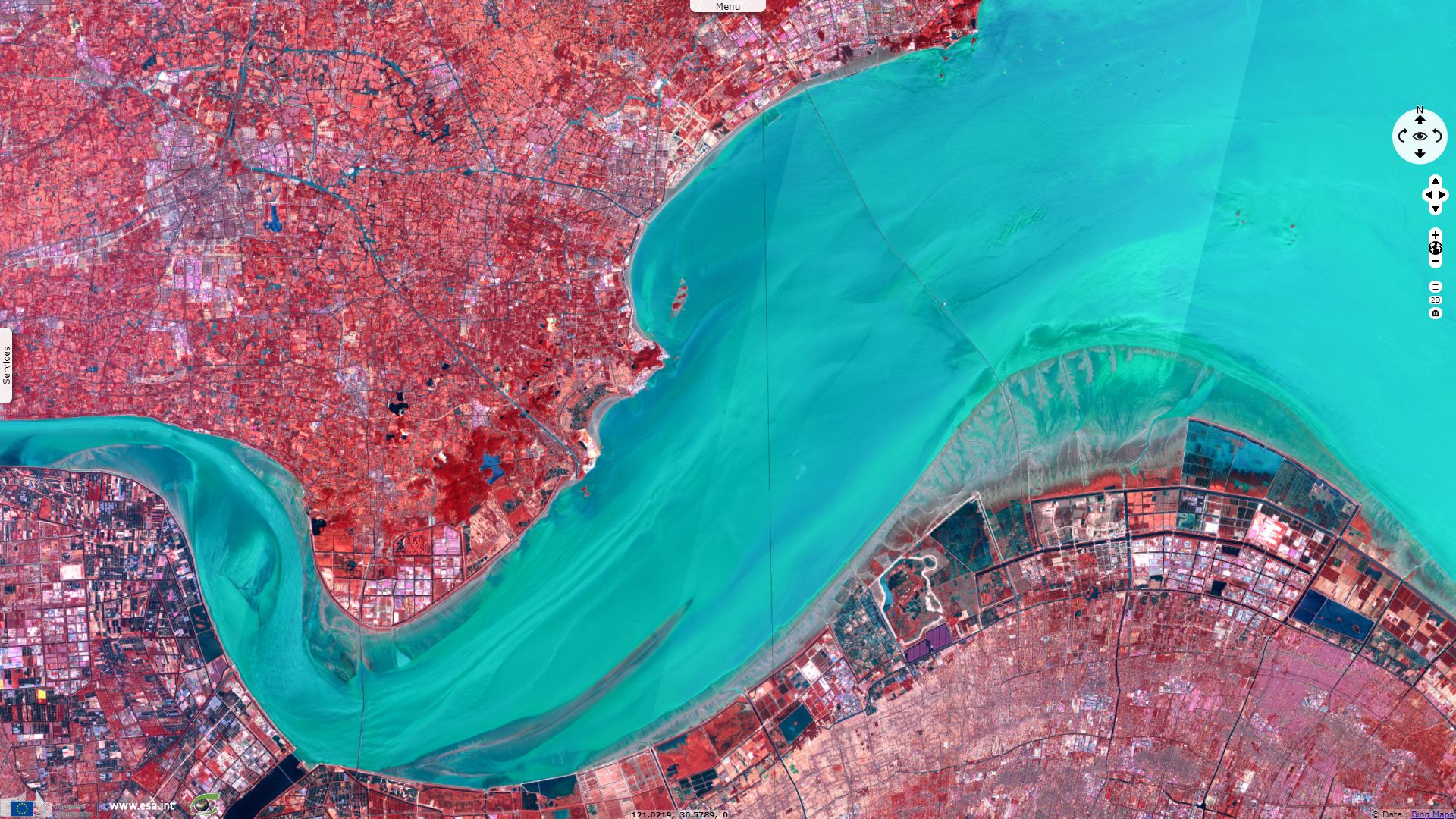 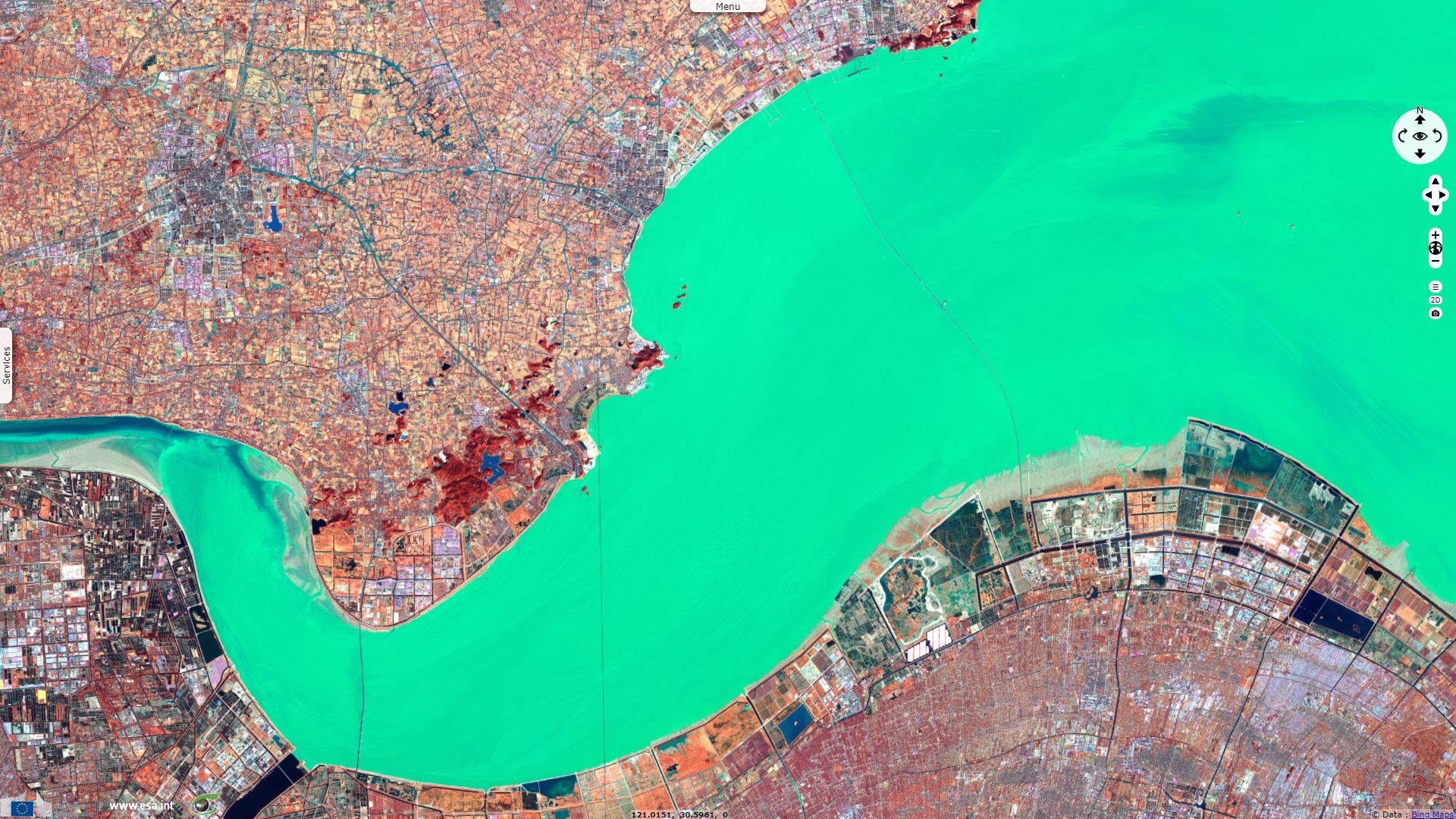 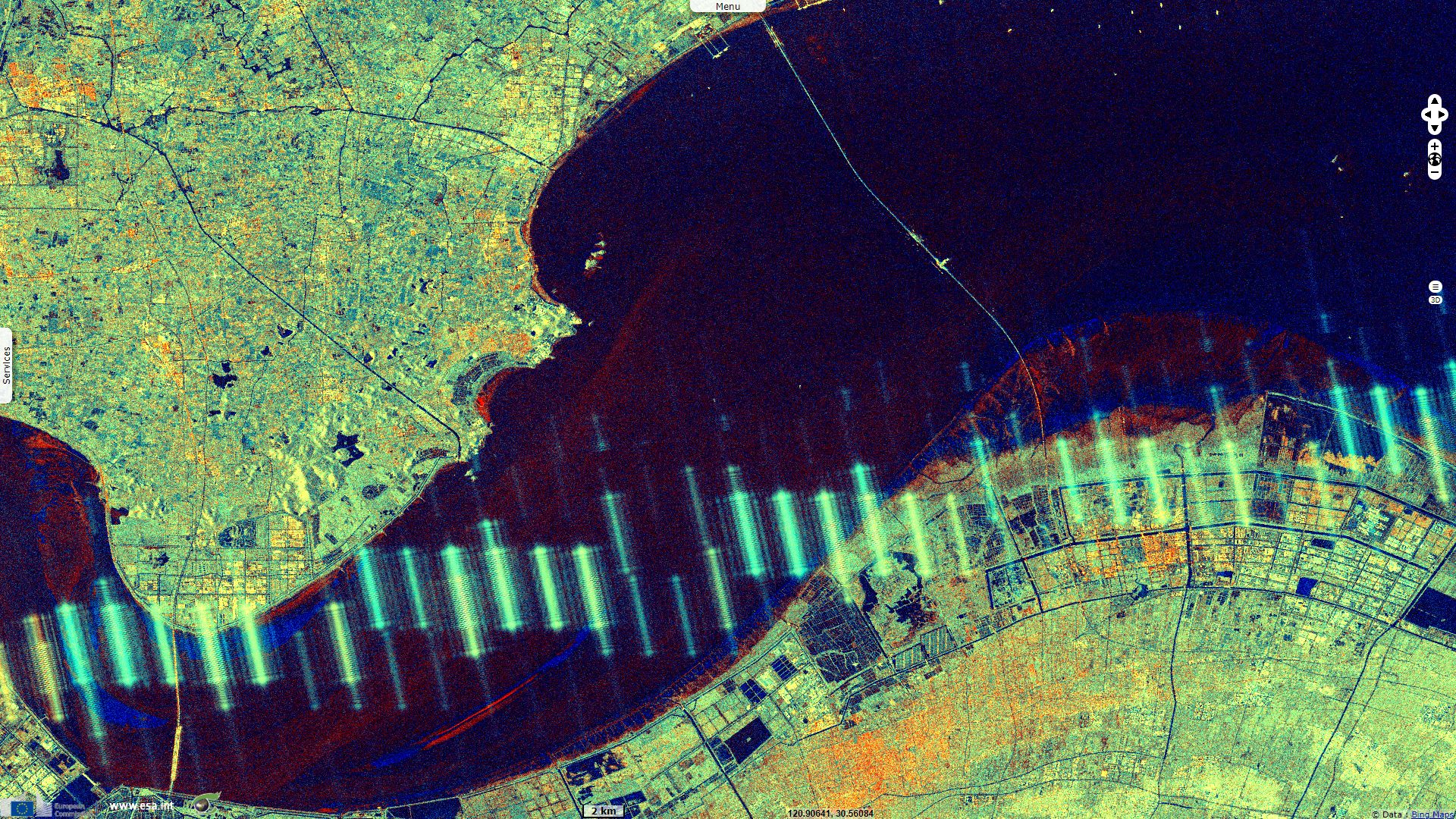 Introducing his book Tidal Bores, Aegir, Eagre, Mascaret, Pororoca: Theory and Observations, Professor of Hydraulic Engineering and Applied Fluid Mechanics Hubert Chanson wrote: "Tidal Bores, Aegir, Eagre, Mascaret, Pororoca: what's all about it ? A tidal bore is a surge of waters propagating upstream as the tidal flow turns to rising and the flood tide rushes into a funnel shaped river mouth. The bore forms during the spring tides when the tidal range exceeds 4 to 6 m and the rising tide waters are confined to the narrow funnelled estuary."
Fig. 4 - S1 (04.04.2017) - vv,vh,ndi(vh,vv) colour composite - At high tide, much of the less sloped southern bank is hidden underwater.
2D view 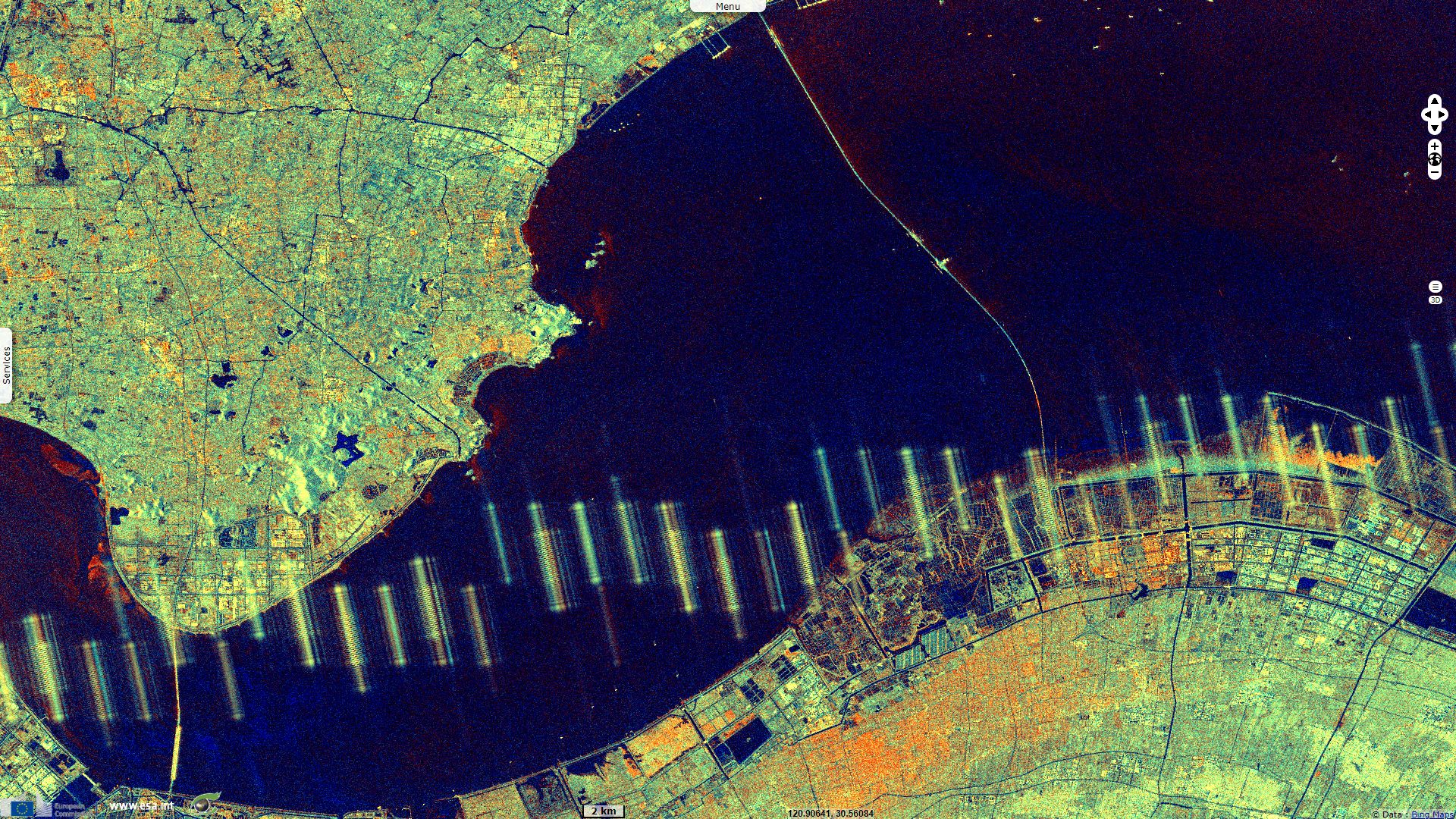 "It is estimated worldwide that over 400 estuaries are affected by a tidal bore, on all continents but Antarctica. A bore is a discontinuity of the water depth and it represents a hydrodynamic shock. The tidal bores have a significant impact on the environmental system and the ecology of the river mouth. Recent studies demonstrated in particular the significant impact of small tidal bores and of non-breaking undular surges on natural channels. Surprisingly, the tidal bore remains a challenging research topic to theoreticians, and many hydrodynamic features remain unexplained."
Fig. 5 - S3 OLCI (19.04.2018) - 10,6,3 natural colour - With the rising tide, a muddy tidal wave enters the clearer river.
2D view 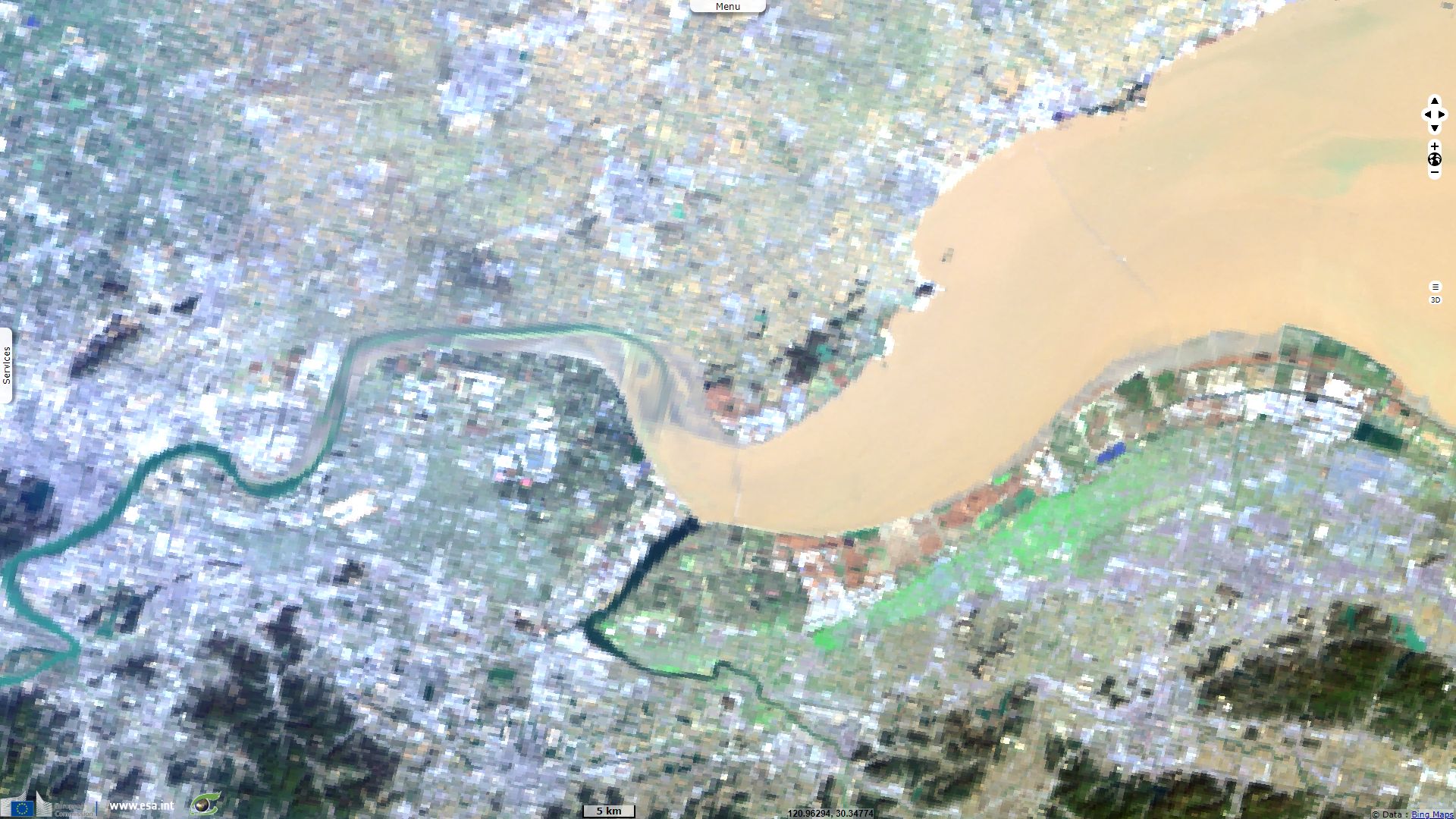 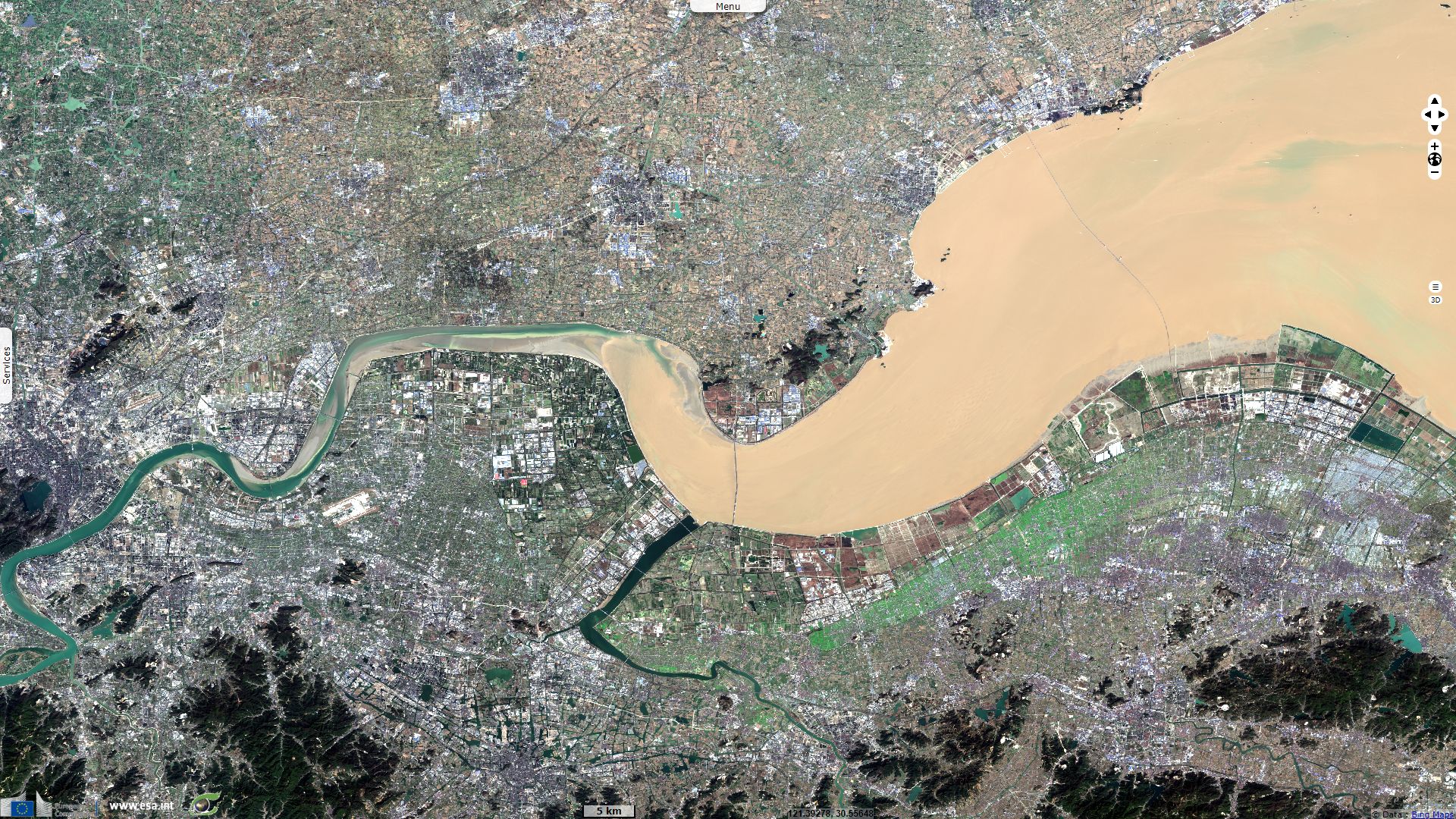 "The existence of a tidal bore is based upon a fragile hydrodynamic balance between the tidal flow range, the freshwater river flow conditions and the channel bathymetry. Some simple theoretical considerations show that this balance may be too easily disturbed by changes in boundary conditions and freshwater inflow. For examples, a number of tidal bores disappeared because of river training, dredging and damming. Man-made interventions led to the loss of several bores with often adverse impacts onto the eco-system: e.g., the mascaret of the Seine River (France) no longer exists after extensive training works and dredging; the Colorado River bore (Mexico) is drastically smaller after dredging."
Fig. 7 - S2 (19.04.2018) - Highly loaded with sediments, the tidal wave ascends the river leaving a trail as it crosses the bridge
3D view 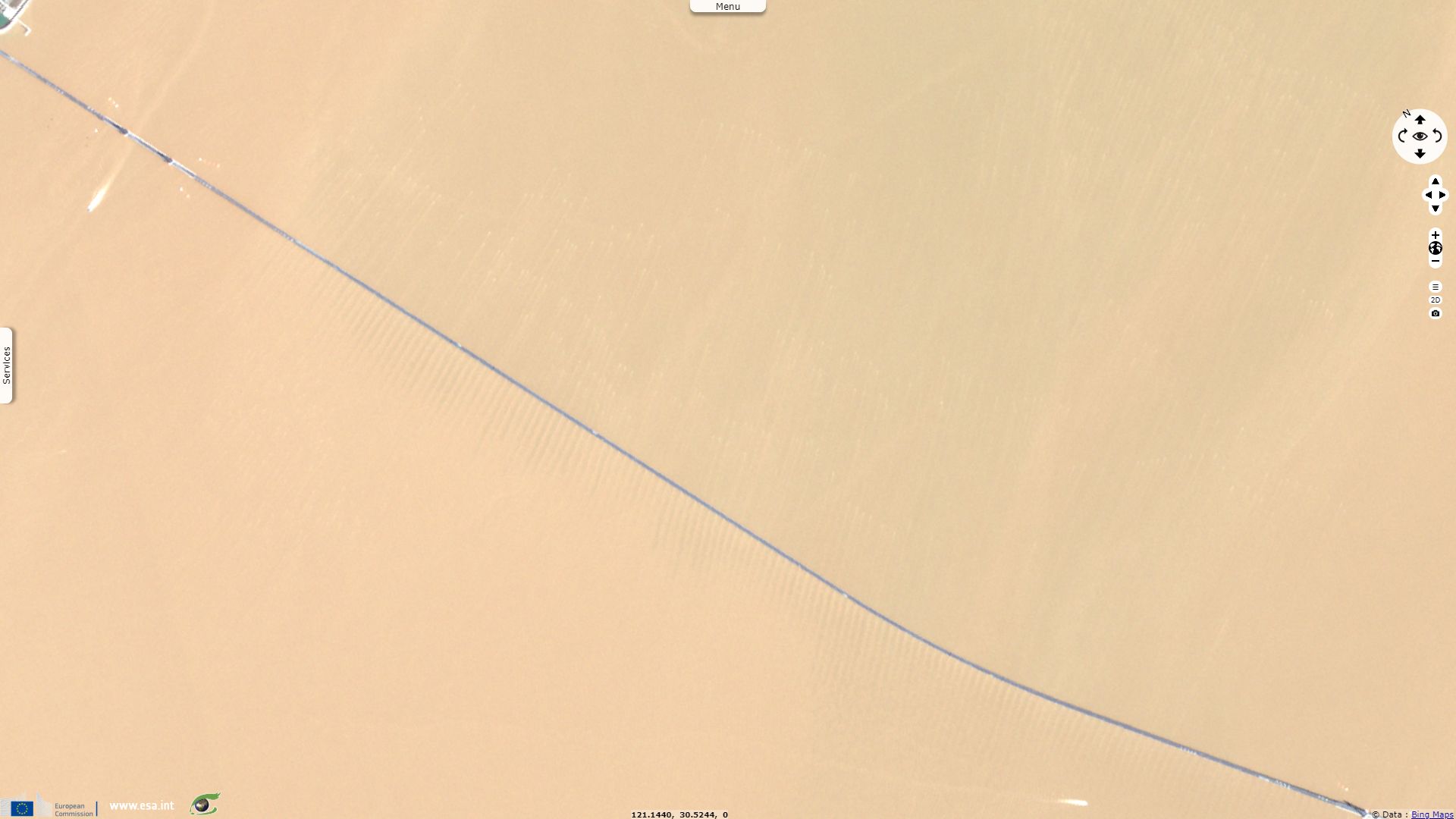 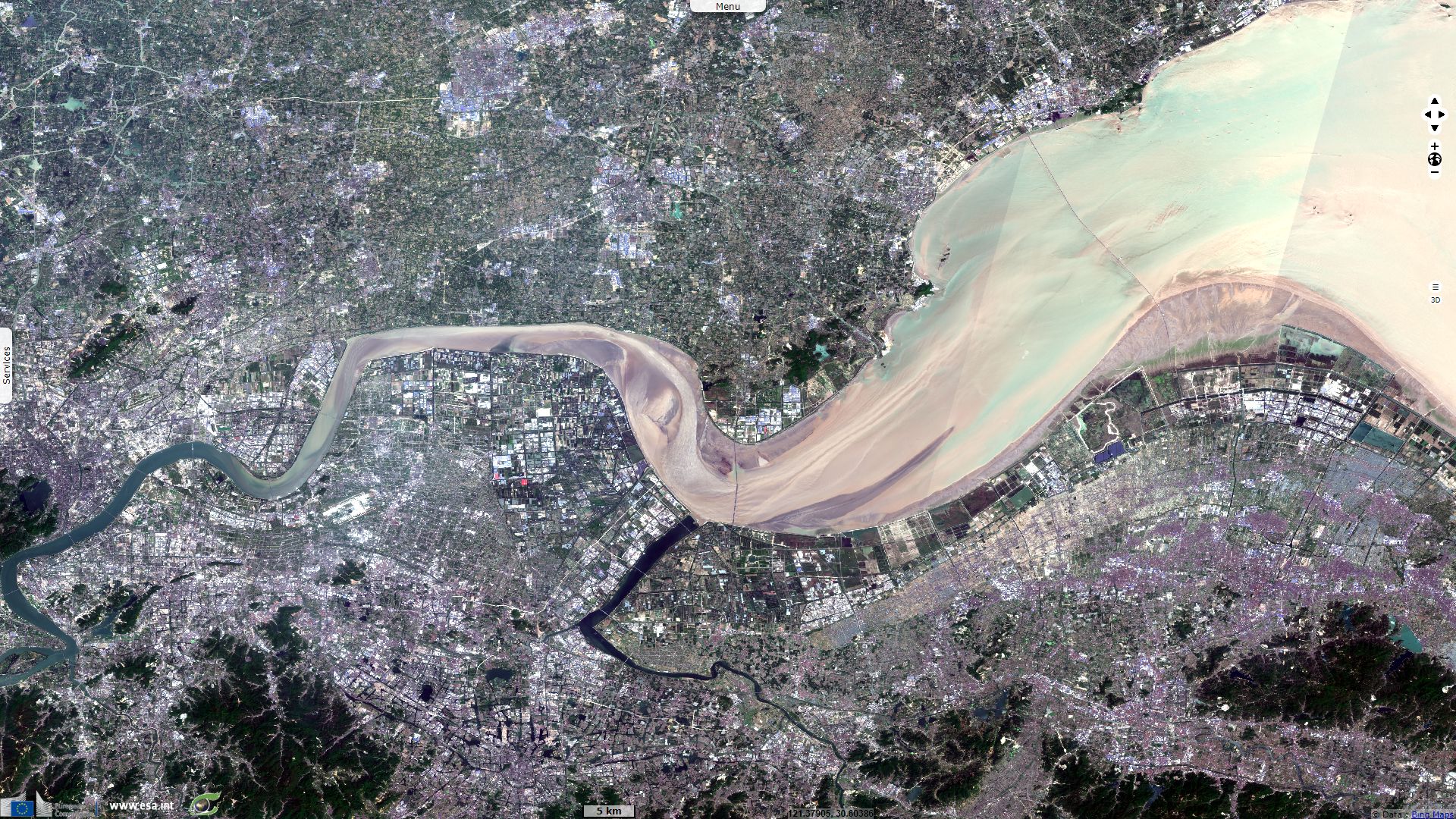 "Although the fluvial traffic gained in safety in some case, the ecology of estuarine zones were adversely affected. The tidal bores of the Colorado (Mexico), Couesnon (France) and Petitcodiac (Canada) Rivers almost disappeared after construction of upstream barrage(s). At Petitcodiac, this yielded the elimination of several native fish species. The proposed construction of the Severn Barrage in UK is a major threat to one of the best documented tidal bores: the Severn River bore."
Fig. 9 - S1 (16.07.2018) - vv,vh,ndi(vh,vv) colour composite - The front of the tidal wave after it crossed Hangzhou Bay bridge.
3D view 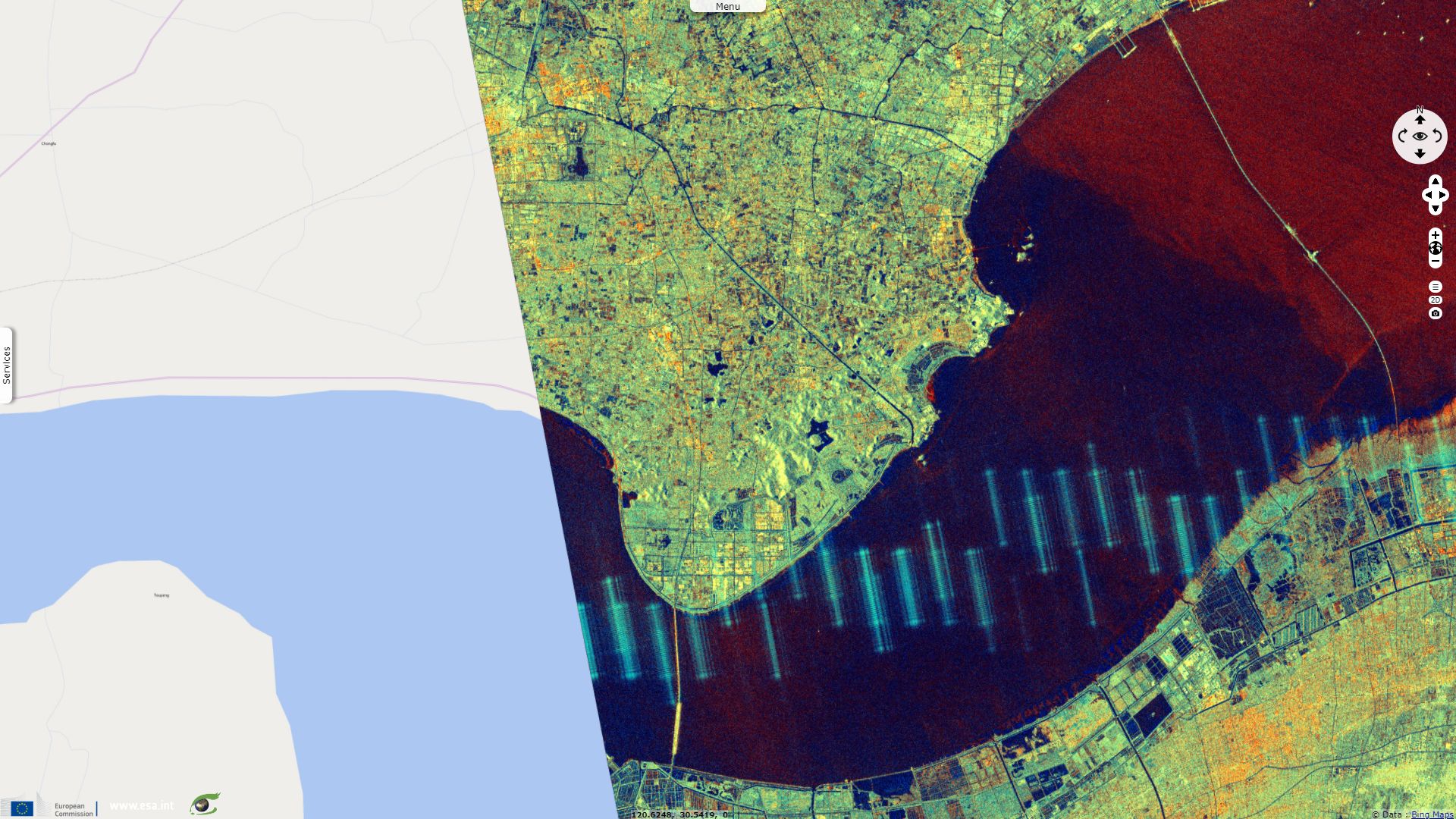 In the article "Tidal bores" of the Encyclopedia of Natural Hazards, Professor Hubert Chanson warns: "The tidal bores can be dangerous and some have had a sinister reputation. For example, in the Seine River estuary (France), more than 220 ships were lost between 1789 and 1840 in the Quilleboeuf–Villequier section. Similarly, the bores of the Petitcodiac River (Bay of Fundy, Canada) and Colorado River (Mexico) are feared by some of the populace. In China, some tidal bore warning signs are erected along the Qiantang River banks and yet a number of tragic accidents happen every year."
Fig. 10 - S1 (26.08.2017) - The front of the stormy waters shows in red against the calmer river surface in blue.
3D view 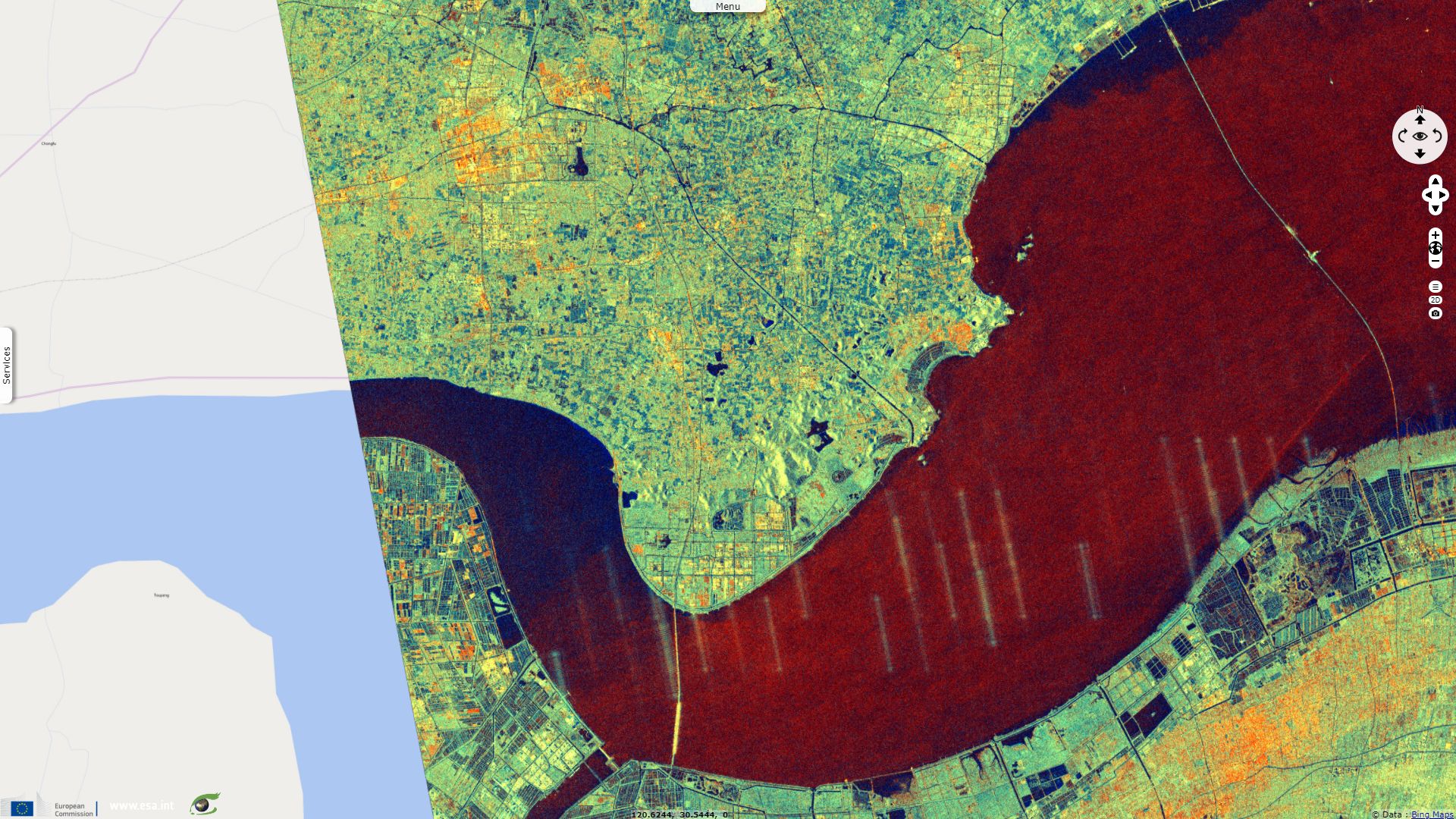 Outlet of the Qiantang River, Hangzhou Bay is known for hosting the world's largest tidal bore, up to 9 metres high, and traveling up to 30 km per hour. Zhejiang province website reminds: "Tide watching on the Qiantang has been a popular activity for centuries, dating back to the Han Dynasty (206BC-AD220). By the time of the Southern Song Dynasty (1127-1279), it had become a well-established event on the social calendar for both ordinary people and the royal court."
Fig. 11 - S1 (15.05.2017) - The strength and the roughness of the tidal bore decreases as it progresses over the river surface.
3D view 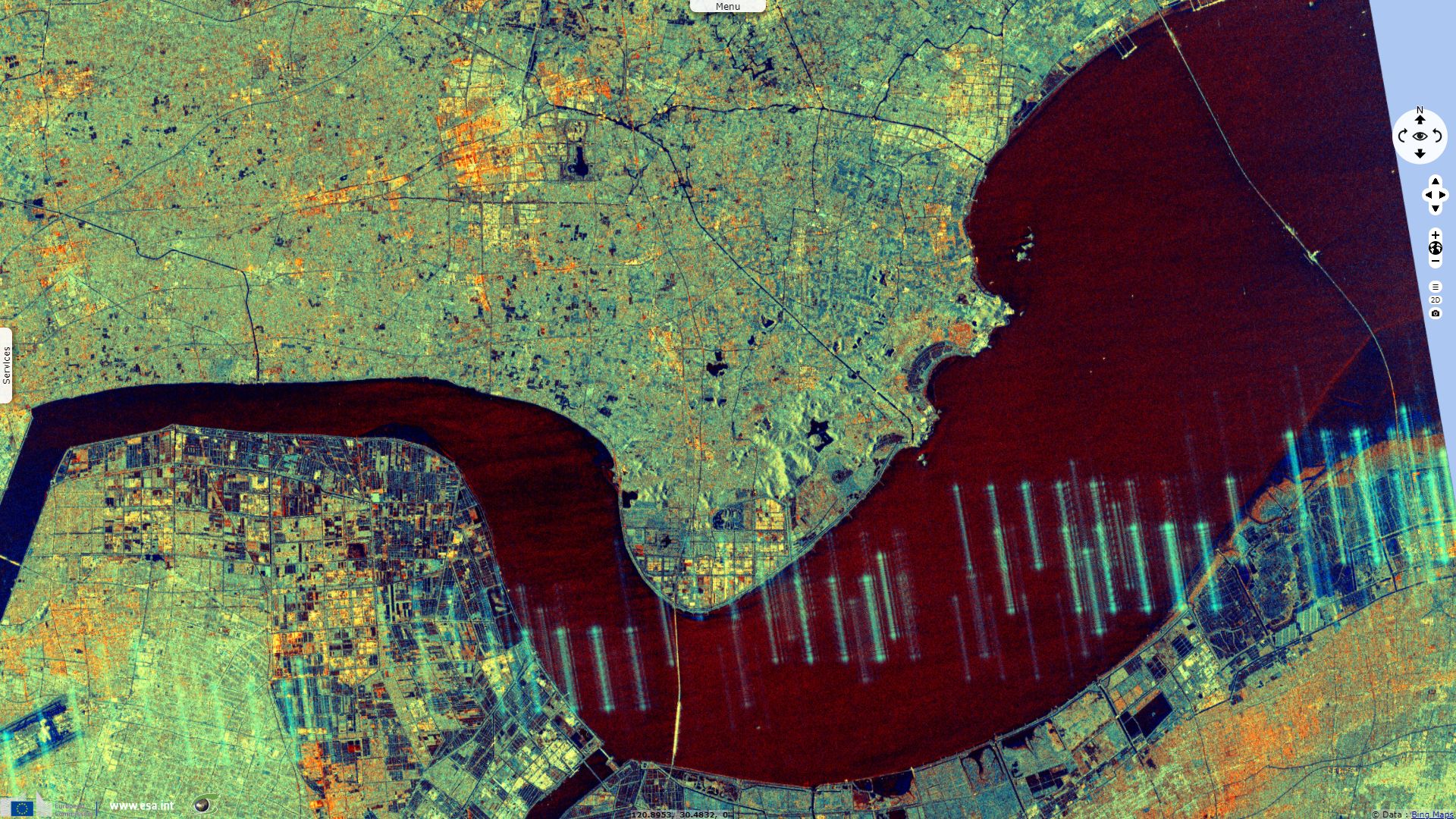 The depth of Hangzhou Bay and Qiantang River doesn't exceed 15m. "While the Hangzhou Bay at the mouth of the Qiantang is about 100 km wide, the river narrows to a mere 2-3 km at one point -- its Yanguan township section. As the tidal waters are blocked by the narrow river passage, pressure builds up from behind until a tidal bore is formed, creating a high water wall. In addition, the presence of a submerged sandbar at the mouth of the river acts like a springboard for the tide, sending the crest of the bore higher into the air."
Fig. 12 - S3 OLCI (18.07.2018) - 10,6,3 natural colour - The tidal bore after it reached beyond Hangzhou.
2D view 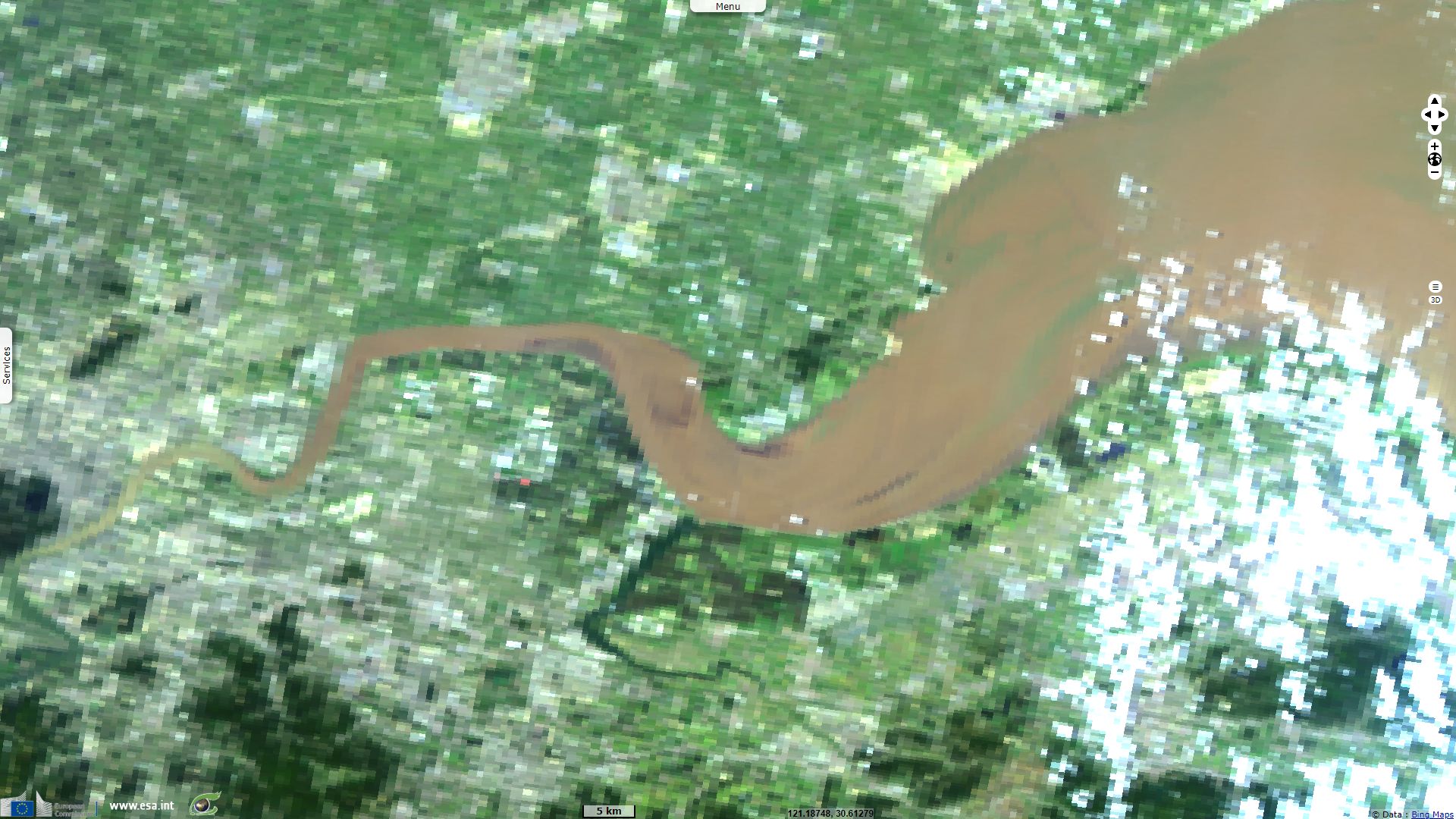 Dr. Charles Keyser Edmunds published a description of Qiantang River tidal bore in 1908: "It is this appreciation of dynamic greatness which overwhelms an observer of the tidal bore as it sweeps in from Hangchow Bay and rushes past Haining, a solid wall of water from two and a half to three miles wide, perhaps ten, twelve or even twenty feet high, with a speed of ten to twenty miles an hour, according to the intensity of the tide. Imagine, if you can, one and three quarter millions of tons of water passing by you each minute, the rush to continue several tens of minutes, and you will have no difficulty in believing that this inrush of water makes itself felt still as a big wave at Hangchow, thirty miles farther inland, and even for some miles beyond."
Fig. 13 - S2 (18.07.2018) - 4,3,2 natural colour - One hour later, the tide lowered, its muddy colour weakened by mixing.
2D animation 2D view 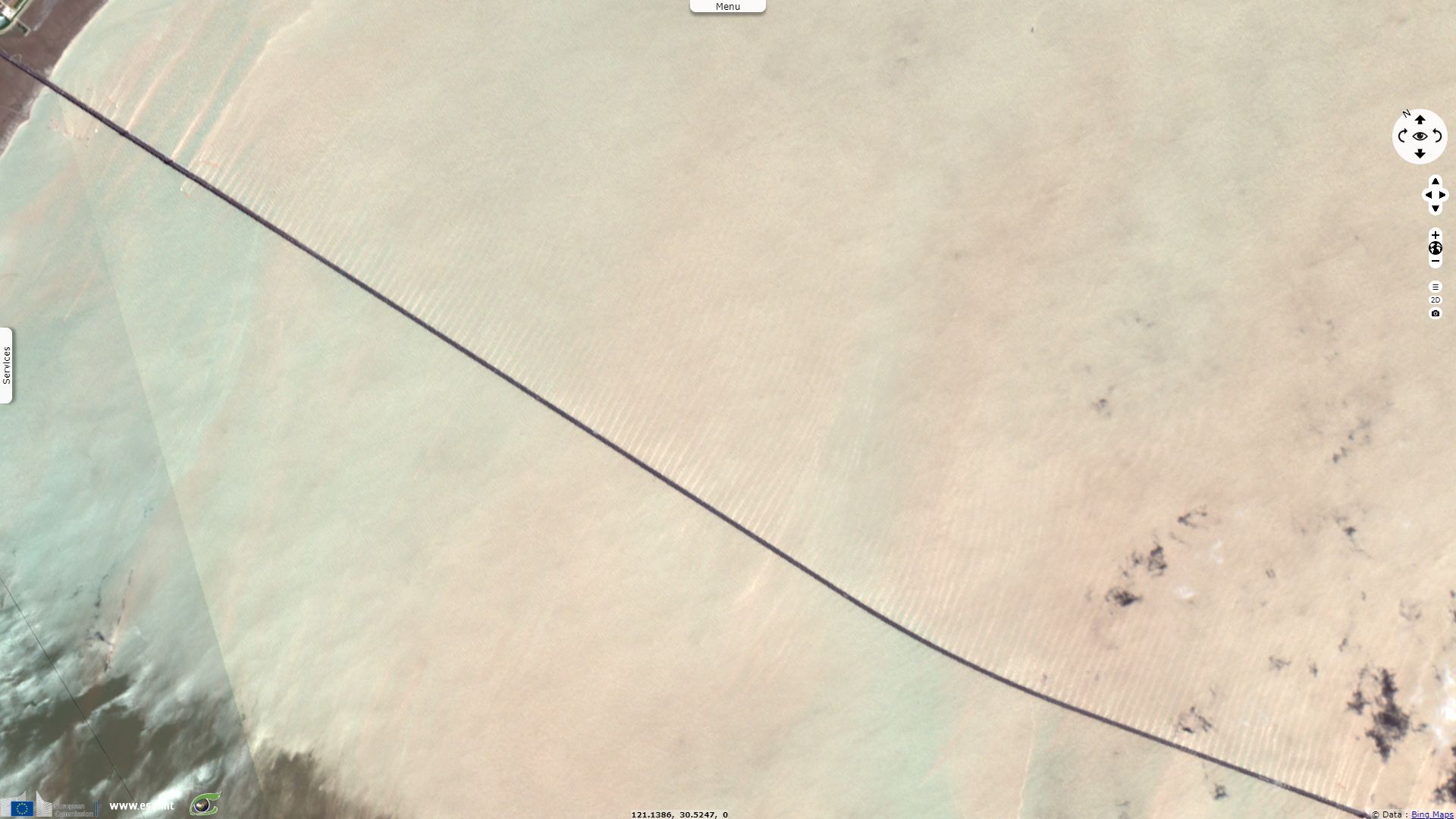