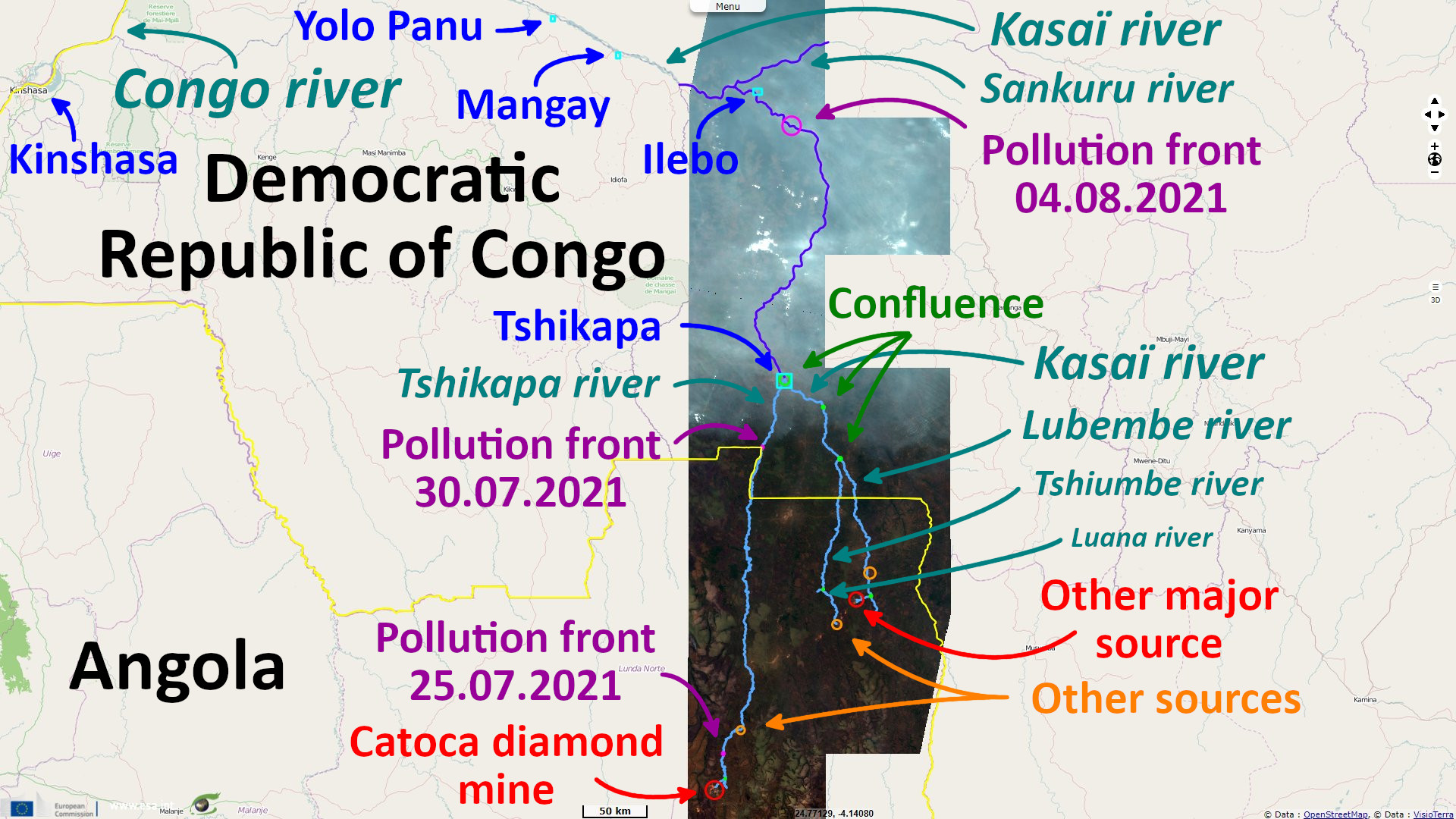 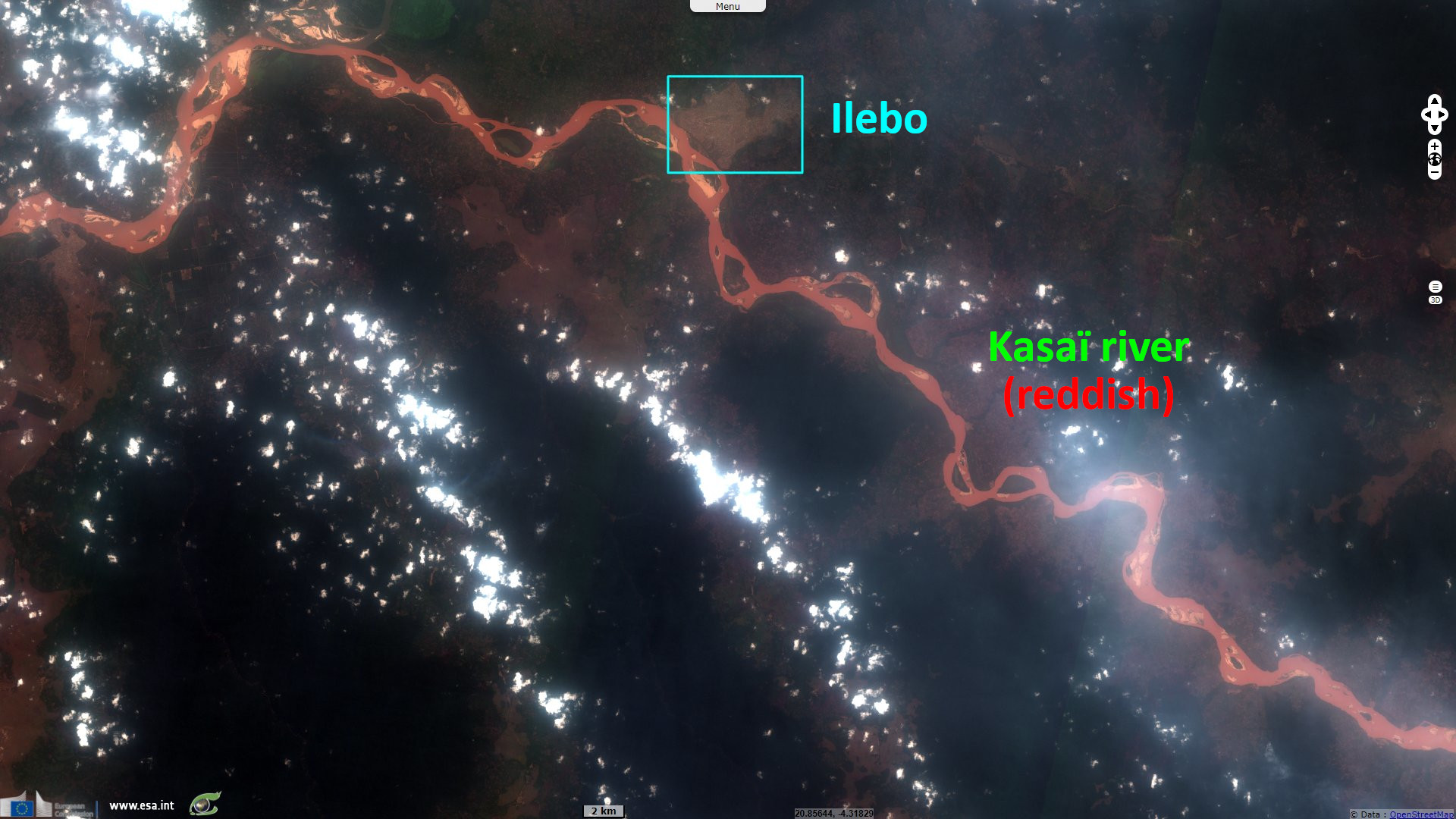 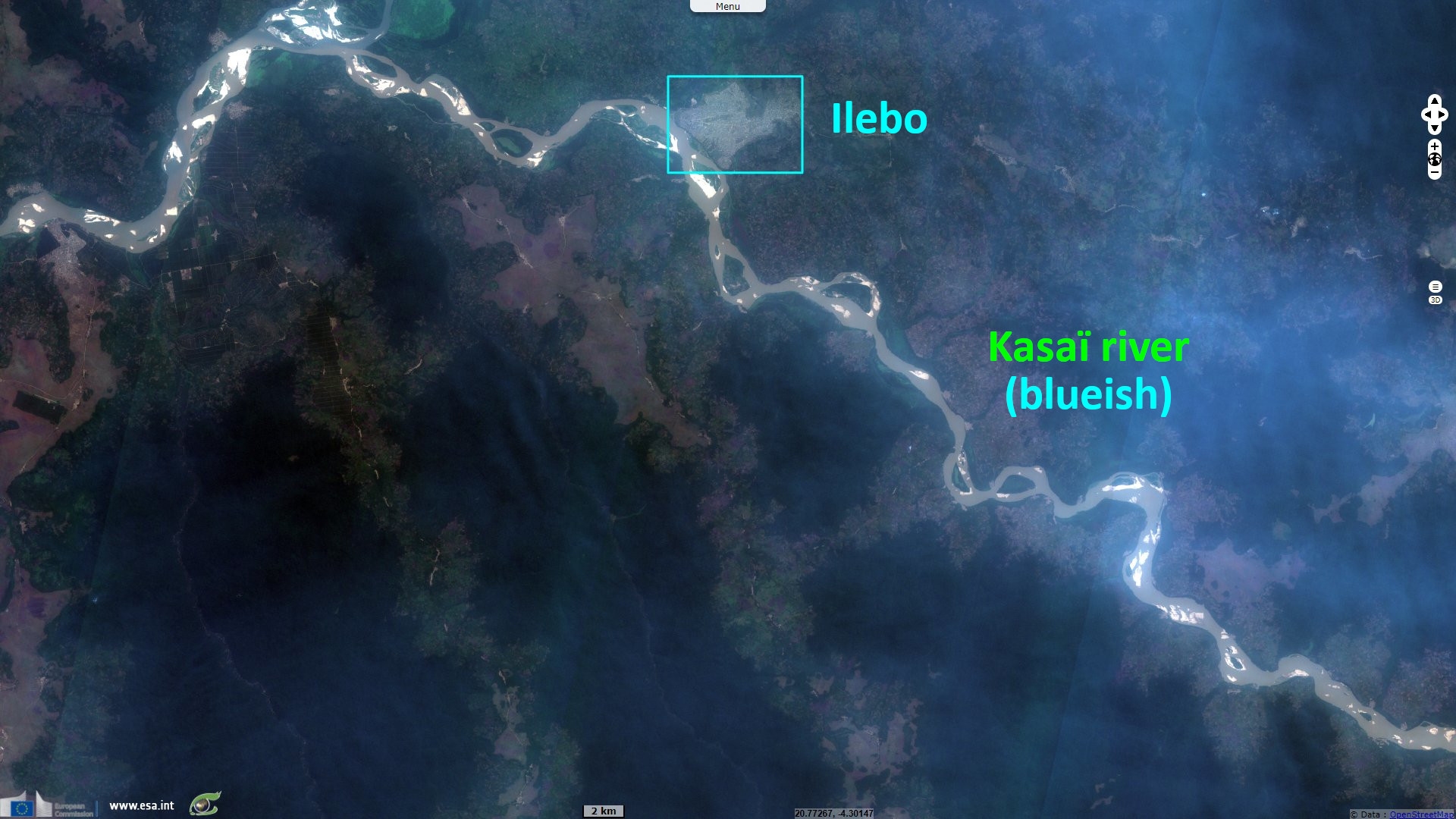 DRC-based Radio Okapi media reports a significant pollution of Kasai River: "The governor of Kwilu province, Willy Irshundala, banned fishing on the Kasai River on Tuesday, August 10, urging the local population to refrain from consuming the water and fish from this river until further notice."
Fig. 4 - S2 (07.08.2021) - The pollution is confirmed further downstream, image of the reddish pollution progressing near Mangay, DRC.
2D view 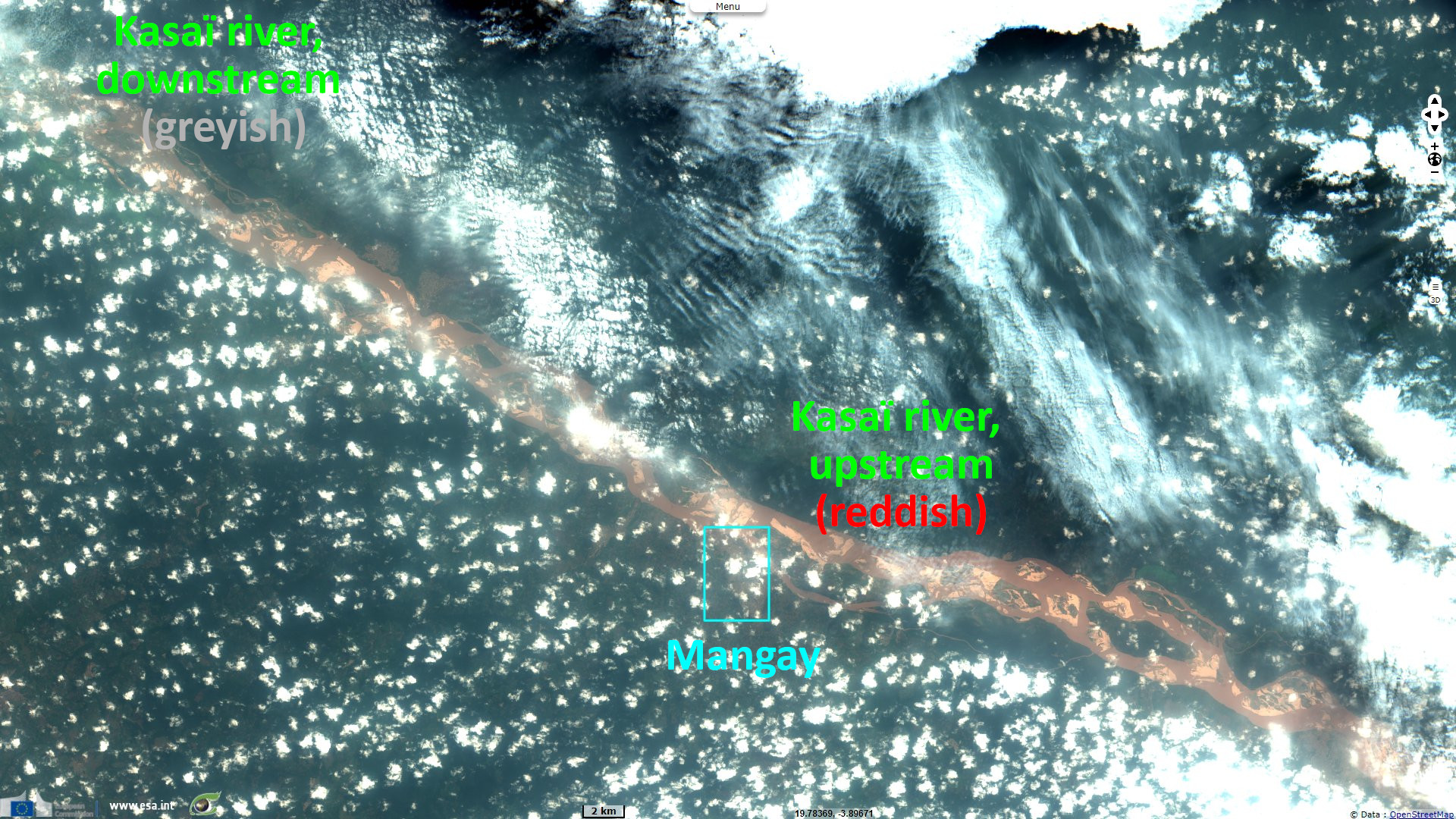 Fidèle Kasangandjo Mwagalwa, agronomic engineer in water and soil management and research assistant at the Congo Basin Water Resources Research Center (Centre de Recherche en Ressource en Eau du Bassin du Congo, CRREBaC) describes the Kasai River Basin in the following terms: "The Kasai River Basin is located between 15°30' and 25° East and 1° and 12° South, and is shared by the Democratic Republic of Congo and the Republic of Angola, with a total area estimated at about 730 000 km² from the Kutu Moke hydrometric station in Kwango province in the Democratic Republic of Congo. This basin covers about 20% of the total area of the Congo Basin (Tshimanga, 2012)."
Fig. 5 - S2 (13.07.2021) - Comparaison with the usual colour of the Kasaï river.
2D view 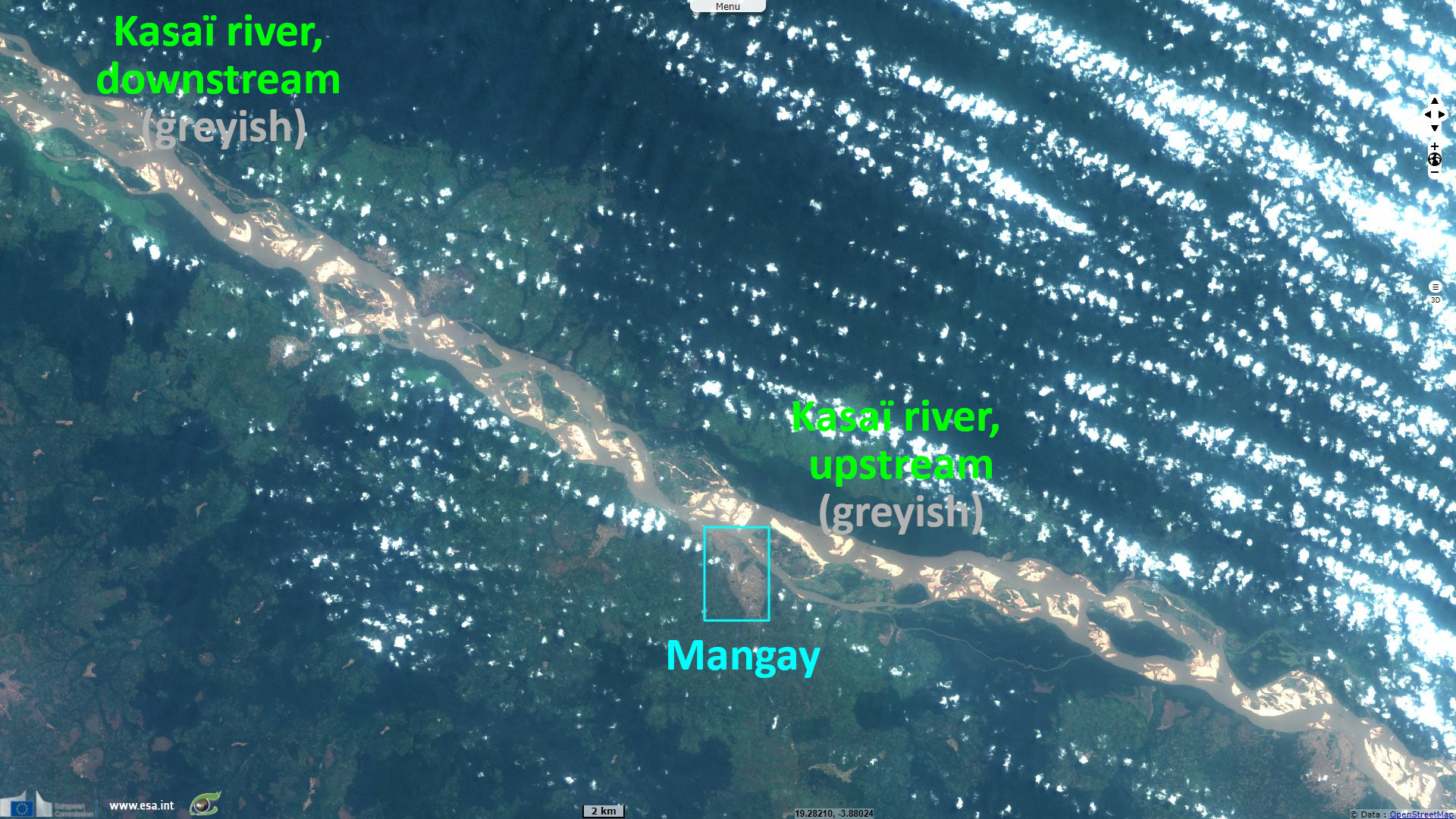 "The Kasai River, which is the main tributary of the Kasai sub-catchment, has its source in Angola where it shares the ridge line with the Zambezi River catchment and flows through the city. The Kasai River originates in Angola and flows through the former kimberlite-rich Kasai Occidental province, where diamonds are mined. It is the main course of the town of Ilebo and flows into the Congo River from Bandundu town."
Fig. 6 - S2 (04.08.2021) - Five days before, upstream of Ilego, a reddish pollution progressed on the Kasaï river.
2D view 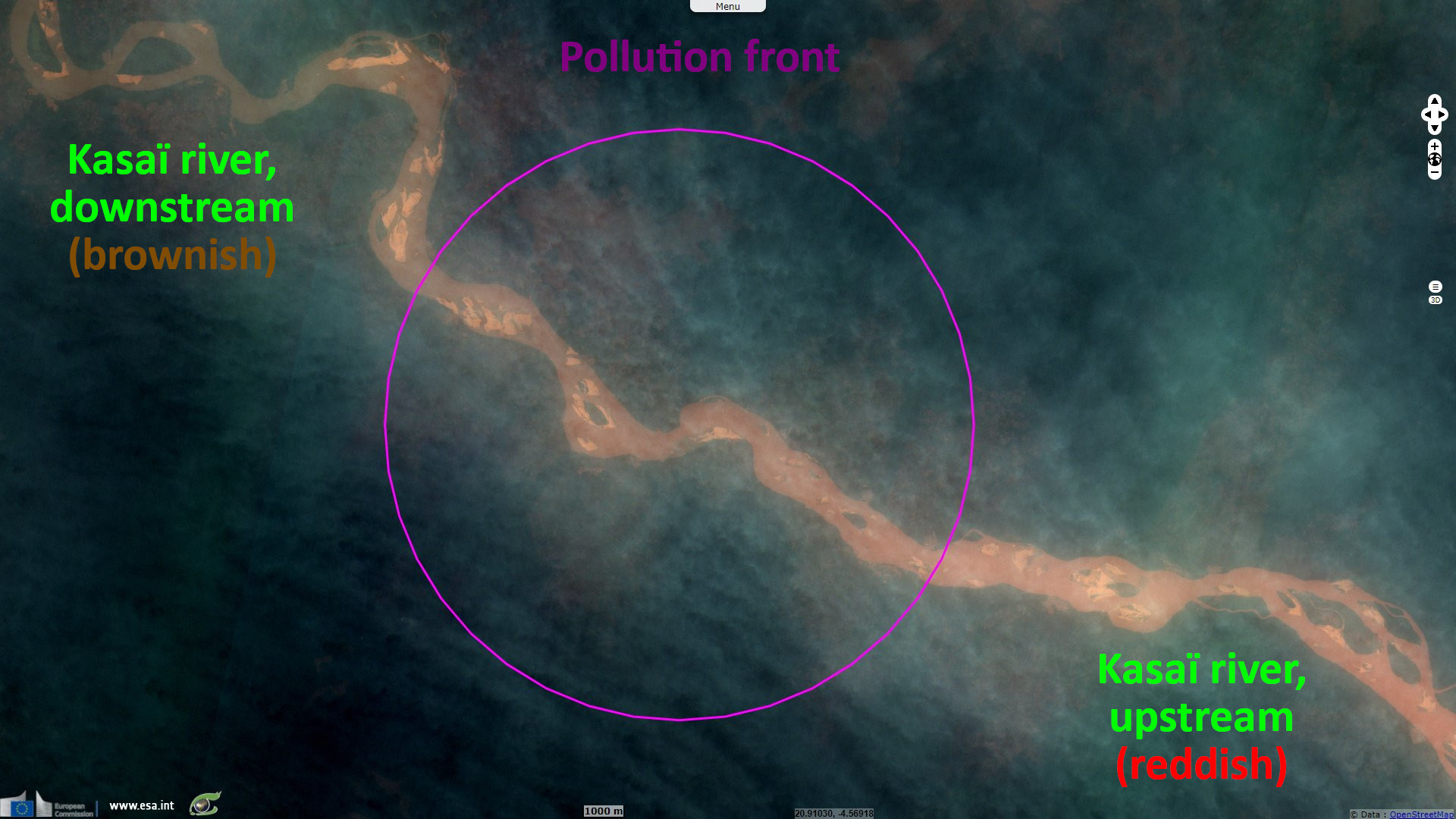 The Congolese newspaper Le Maximum adds precision on the source: "This waste comes from an Angolan diamond processing plant in the province of Lunda Sul, the largest in the country, which is discharging toxic substances into this river that borders the DRC and Angola, according to the governor of Kasai, Dieudonné Pieme Tutkot."
Fig. 7 - S2 (04.08.2021) - Further upstream at the same date at Tshikapa city, at the confluence with the Tshikapa river, from which this pollution comes.
2D view 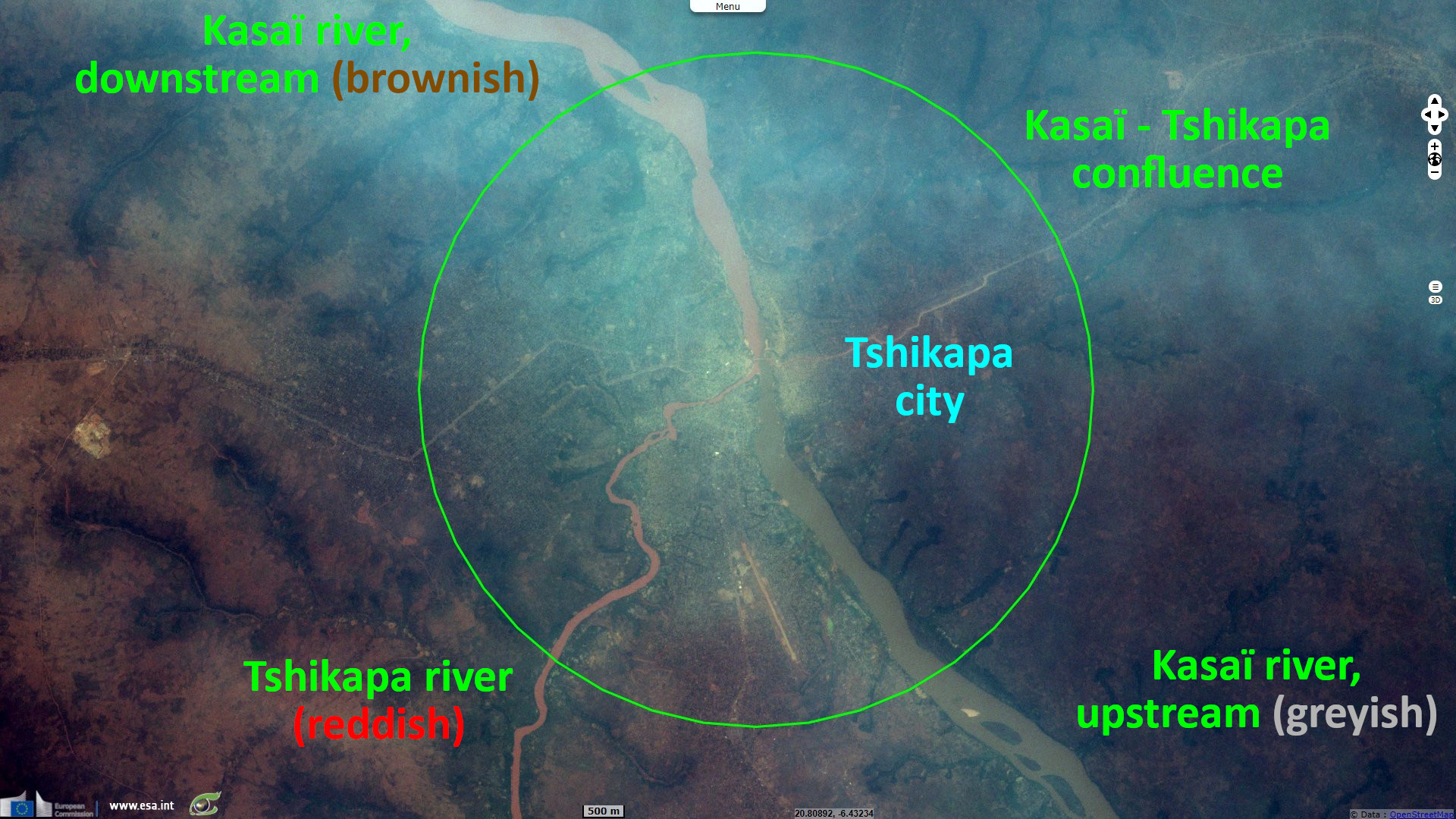 "Tshikapa has its source in the Ciçapa marshes in Lunda-Sul, a few kilometres from the Kwango River. The waters of the river then flow from the South to the North through two Angolan provinces. They mark the border between the DRC and Angola for about 40 km before flowing into the Kasai River near the town of Tshikapa. This explains the extreme speed with which the waters of the Kasai River were contaminated and reached the port of Ilebo, where fish and aquatic animals were found dead. This pollution also caused environmental damage reported across the border in Angolan territory."
Fig. 8 - S2 (30.07.2021) - By the end of July, front of the pollution on the Tshikapa river when it had just crossed the border between DRC and Angola.
2D view 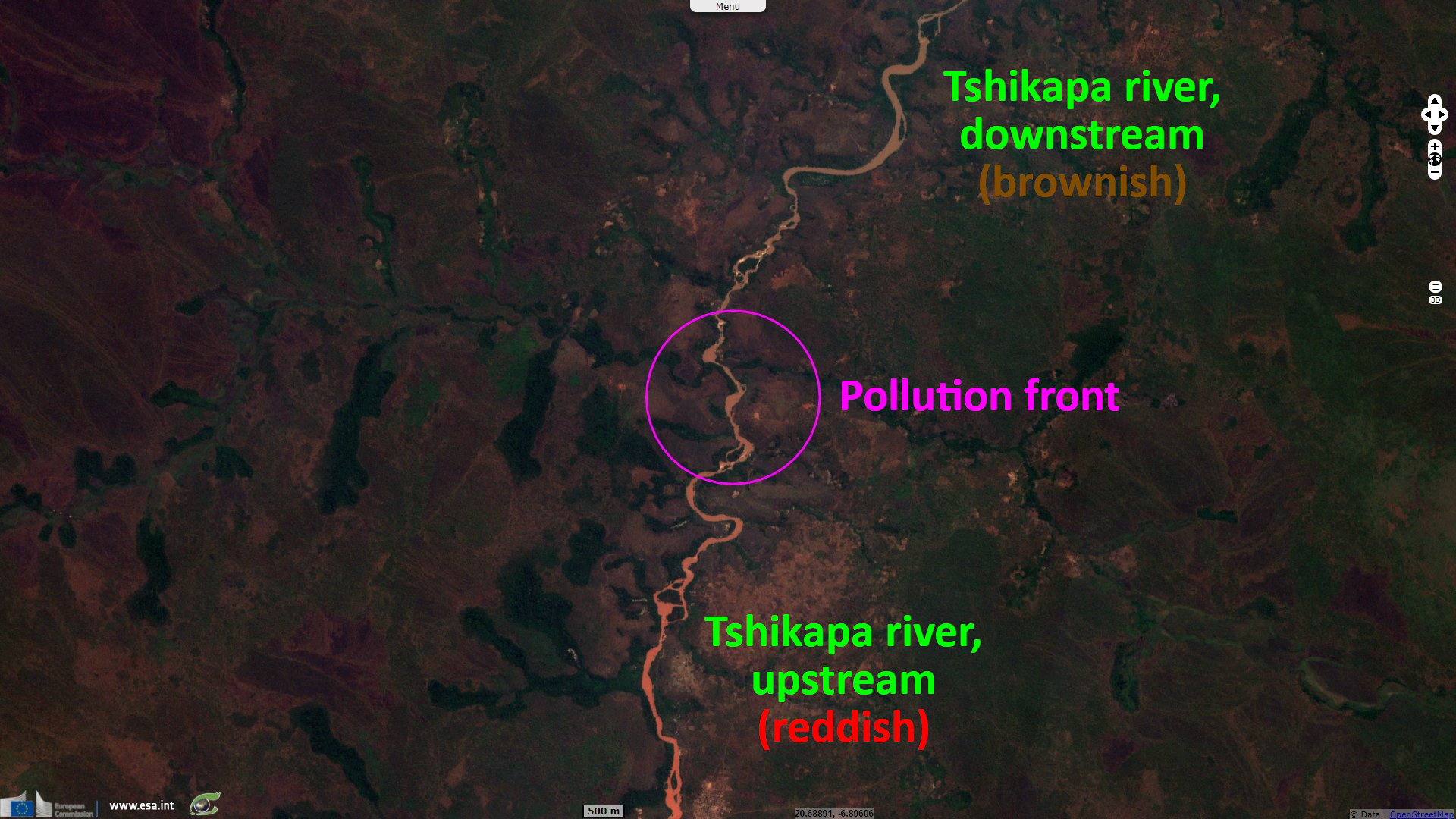 "The Lunda Sul diamond polishing plant, the largest in operation in Angola, is new, having been postponed due to the Covid-19 pandemic until the first half of 2021. It is the result of a partnership between the Angolan state (Sodiam E.P.) and the Indian multinational KGK. The new plant is being built in an area of more than 305 000 km² north of the urban center of Saurimo, 2.5 km from the Muangueji River and about 25 km from the Catoca diamond mine."
Fig. 9 - S2 (15.07.2021) - Luau and Camatchia-Camagico diamond mines were already leaking red material in Tshikapa river on 15 July, too soon to be the source.
2D view 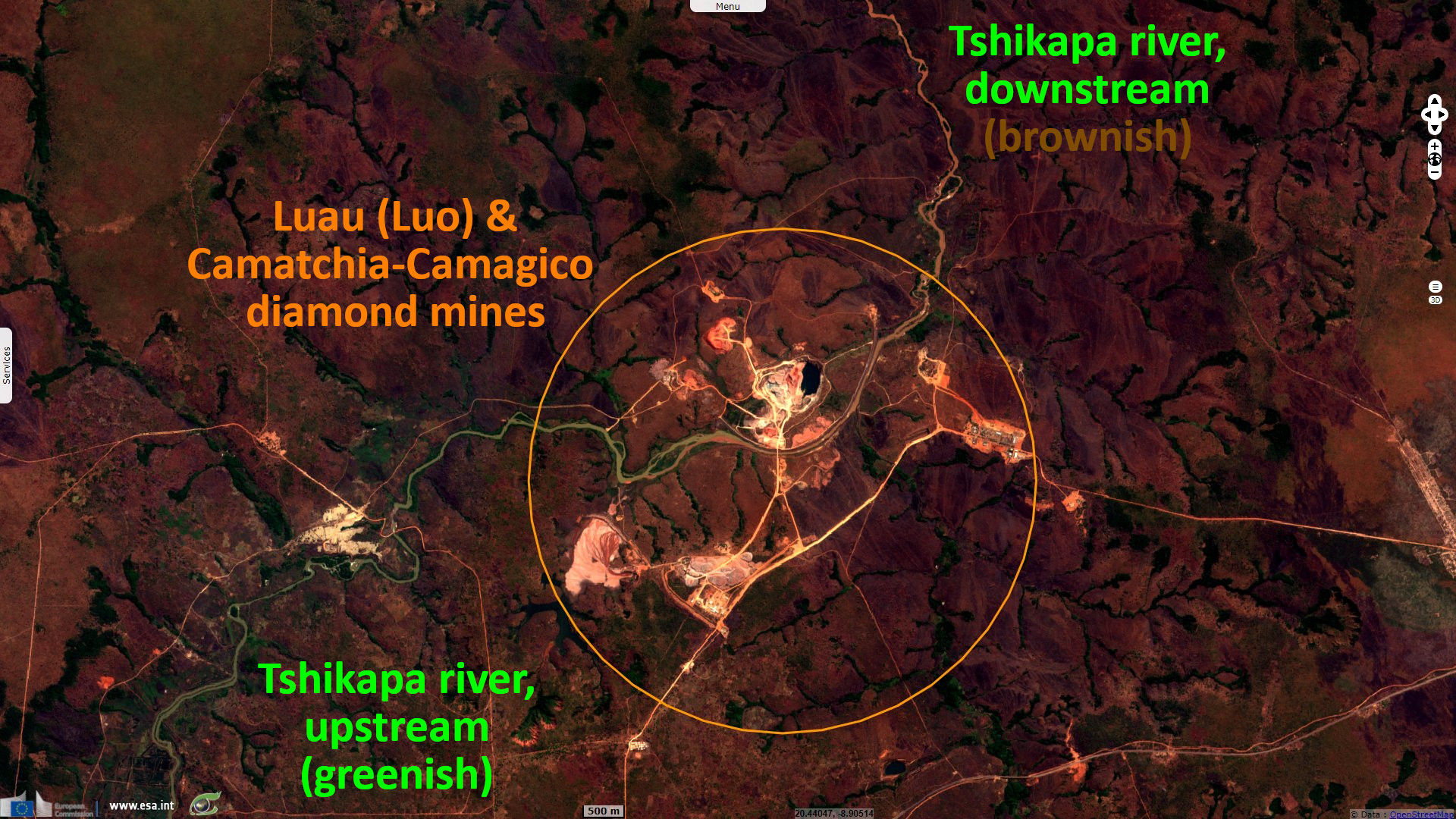 "According to Governor Pieme, the nature of the toxic substances spilled into the Tshikapa and Kasai rivers, killing many fish and aquatic animals (hippos), is still unknown. Samples have been sent to Kinshasa and results are expected shortly. Governor Pieme told the press that Luanda had requested a one-week delay to clean up the contaminated water in the DRC."
Fig. 10 - S2 (25.07.2021) - On 25 July, a strong colour gradient shows the pollution which was then progressing upstream from the above mines.
2D view 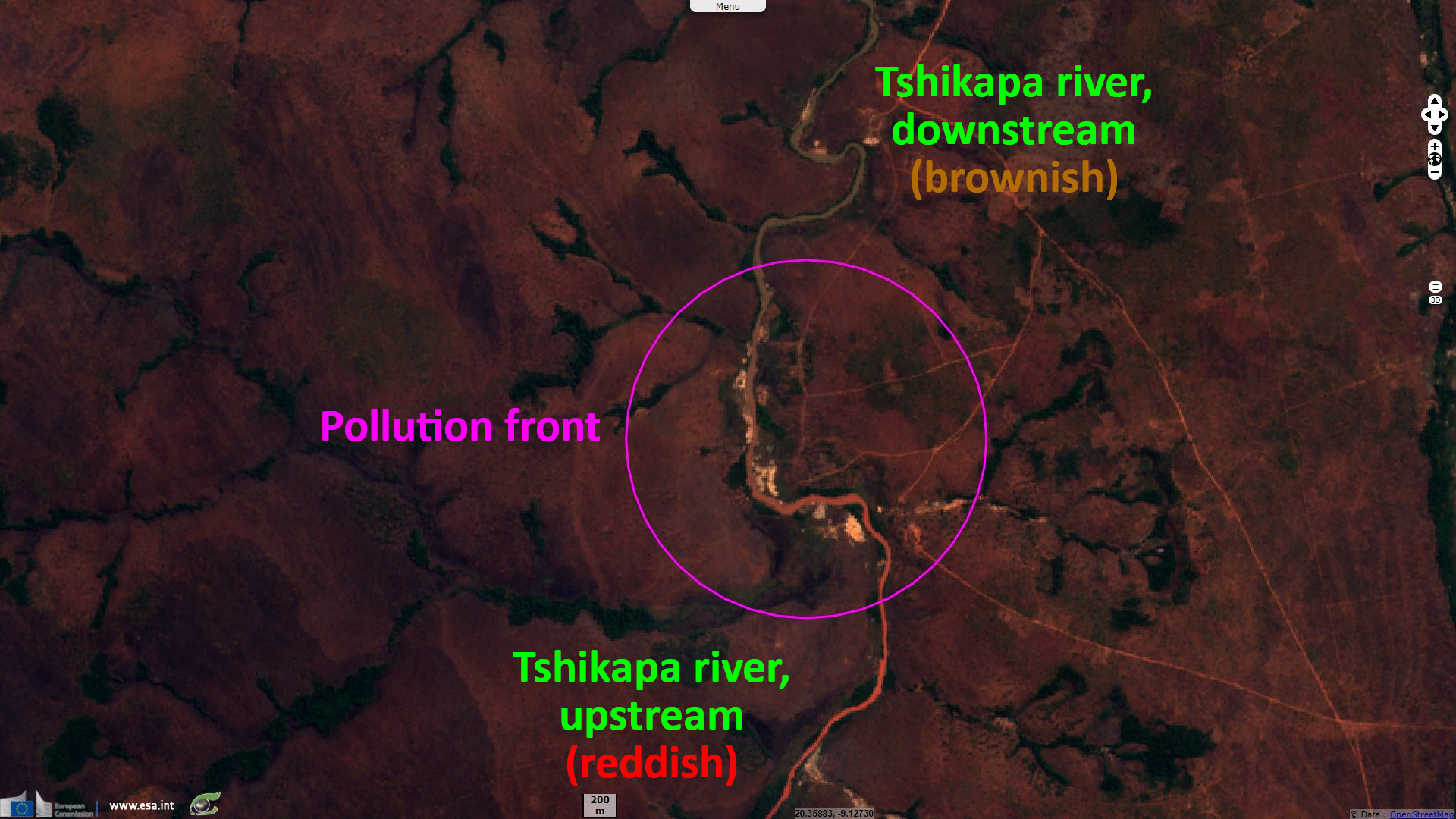 "In Tshikapa, the coloring of the waters of Kasai has been observed since Friday, July 30, 2021. 'The water has become reddish and dead fish are floating everywhere,' reported witnesses interviewed by our correspondent. When questioned, the Kasai Provincial Minister of Mines, Evariste Vetshi, confirmed that it was indeed a pollution caused by the Angolan diamond factory."
Fig. 11 - S2 (25.07.2021) - The source of the pollution seems to be this minor tributary of the Tshikapa river from which comes the bright red hue.
2D view 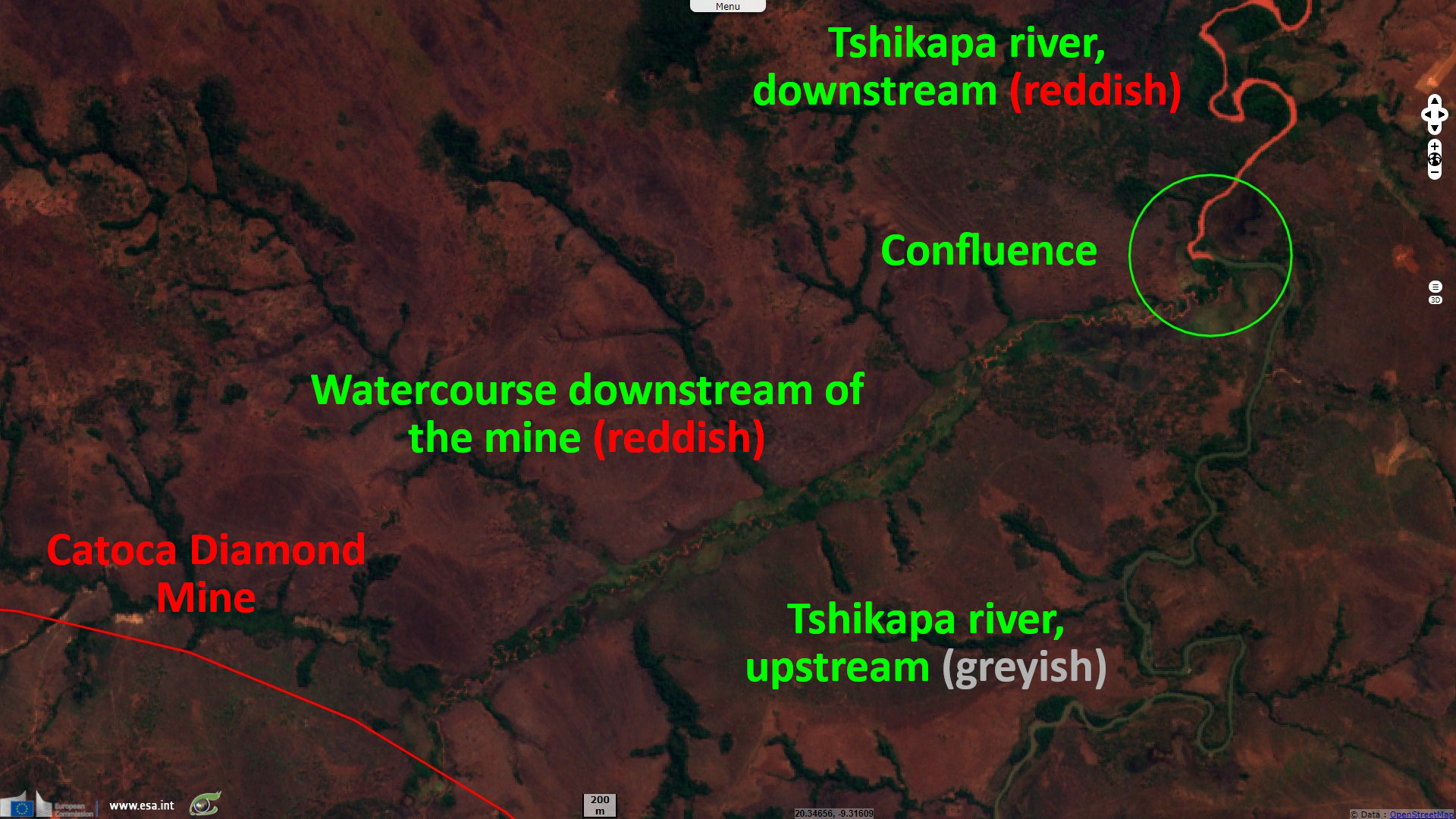 "It should be noted that similar pollution has also affected the Kwilu River in Bandundu province", further west in the DRC, adds Fidèle Kasangandjo Mwagalwa.
Fig. 12 - S2 (20.07.2021) - Image of the same location five days before, no pollution seems to be leaking into the Tshikapa river.
2D animation 2D view 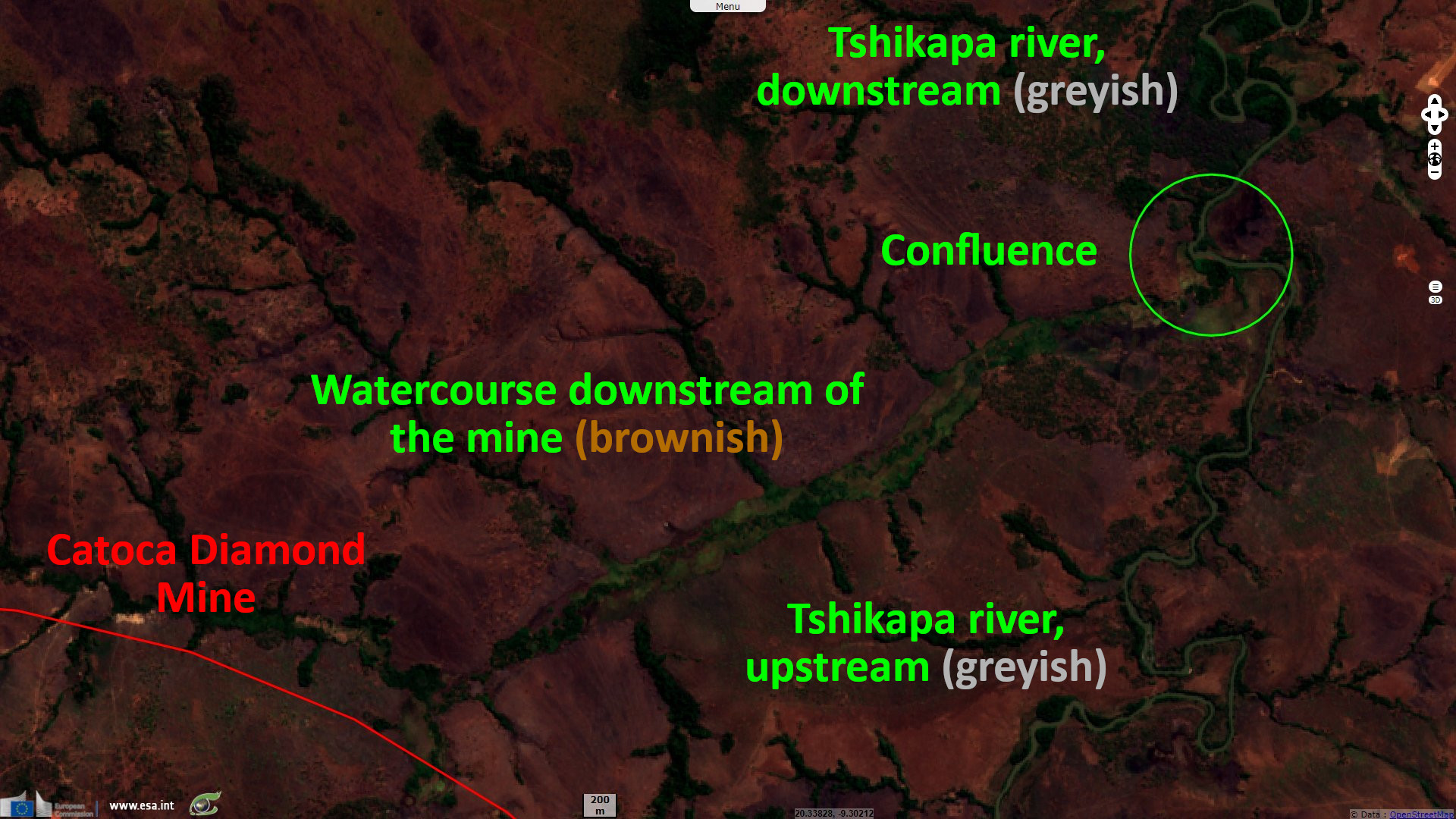 The Angolan media outlet VerAngola warned of pollution from the World's 4th largest diamond mine: "According to Sociedade Mineira de Catoca, the incident was due to the breach of the protection dyke in the retention basin of the mine's washing waters, causing pollution of the Lova river and adjacent areas, on 27 July."
Fig. 13 - S2 (25.07.2021) - It can be inferred the source is Catoca diamond mine (World's 4th largest) that started emitting red material between the 20 & 25 July.
2D view 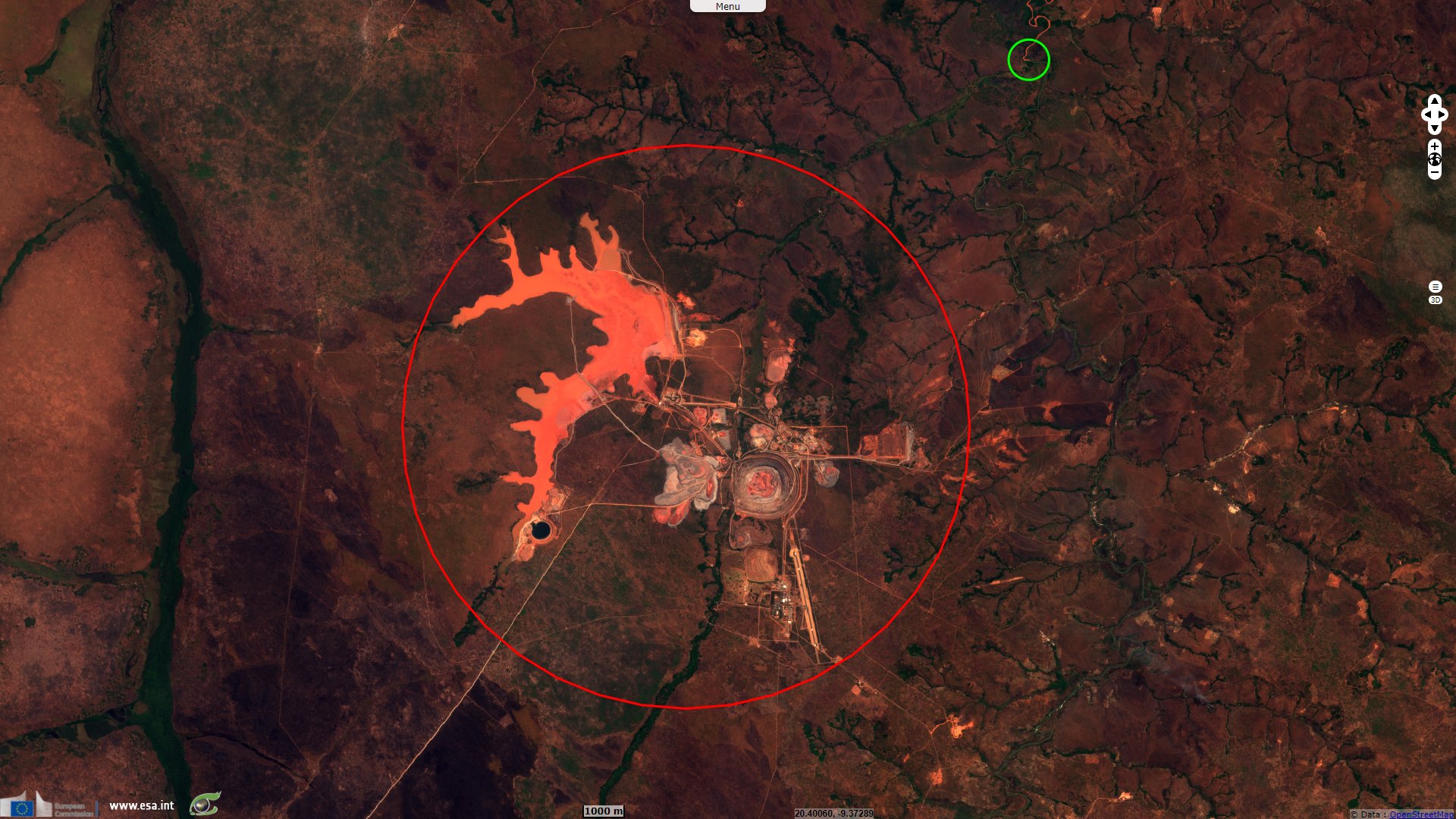 "The document points out that the diamond company also informed that it has taken steps to contain the spill, with the construction of a dam in the affected area, and that a recovery plan for the affected areas is in progress."
Fig. 14 - S2 (04.08.2021) - Another extraction site polluting at least since the 15 July, near Sepatua along the Lubembe river, another tributary of the Kasaï
2D view 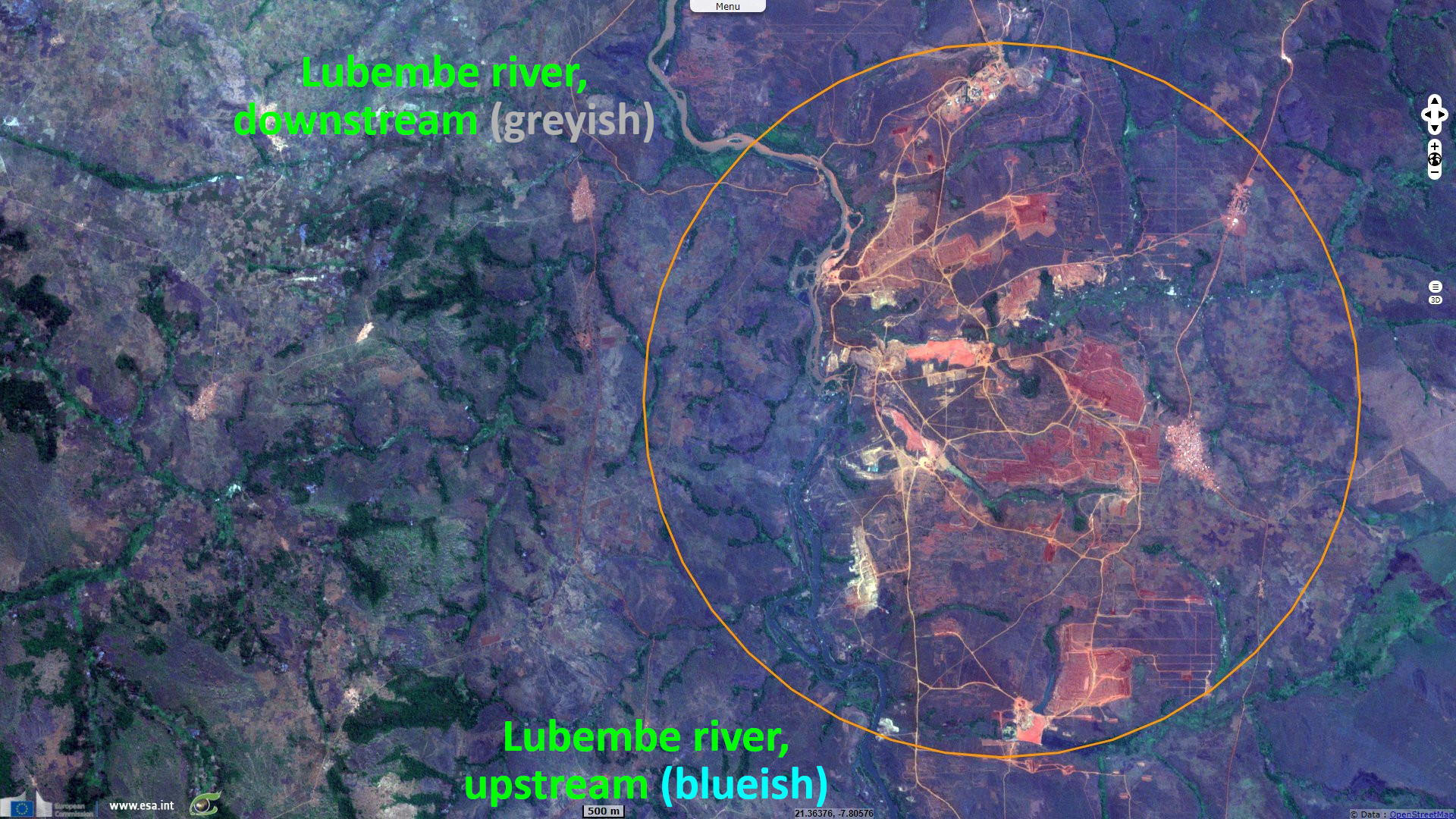 "The authorities also inform that, in order to monitor the containment and cleaning actions of the affected areas, DNPAIA has started inspection works to restore the state of environmental and social degradation, in light of the polluter pays principle, under the terms of the Decree Presidential 194/11, of 7 July, on Liability for Environmental Damage."
Fig. 15 - S2 (20.07.2021) - Another contributor to the pollution of the Lubembe river, at least since the 15 July.
2D view 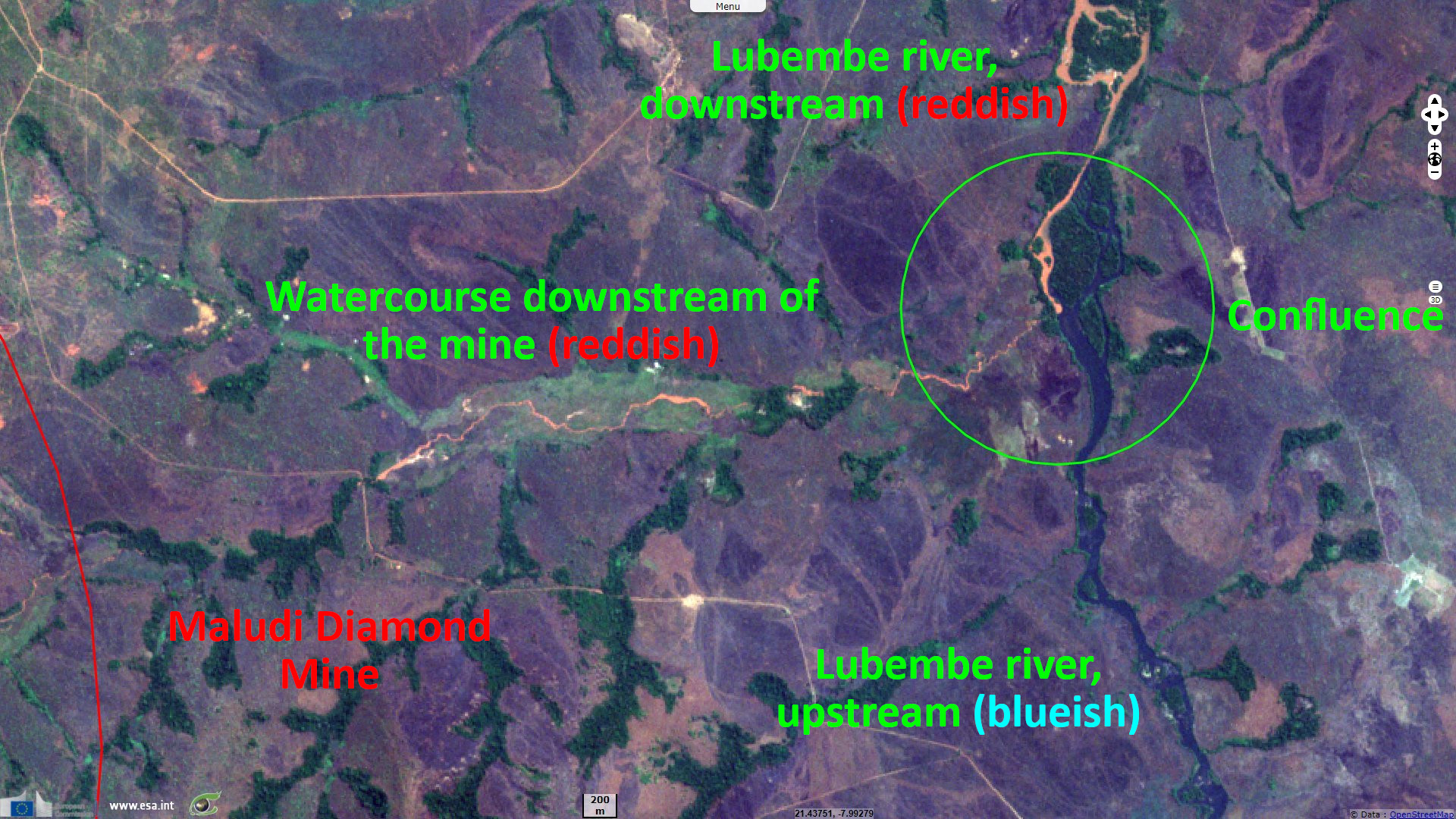 According to Sentinel-2 images, its seems however that the pollution started between the 20 and 25 July rather than the 27 July. Furthermore, not only has the spill containment failed as evidenced by the impact downstream but the dyke was still releasing harmful material on 30 July, 04 August and 09 August, more than two weeks later.
Fig. 16 - S2 (20.07.2021) - These mines near Maludi seem to be the source, but they are unlikely to be the cause of the pollution reported in Kasaï river.
2D view 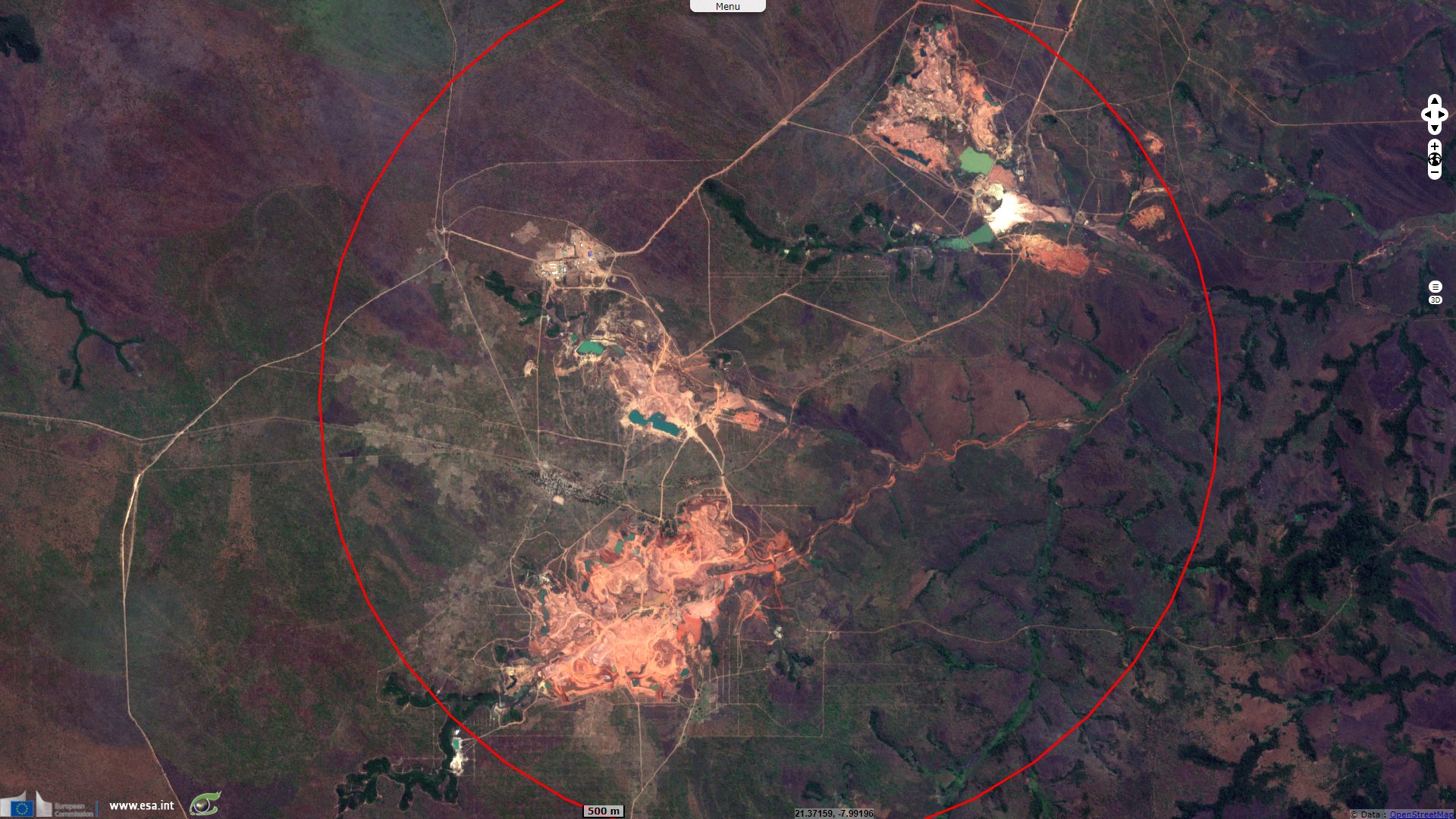 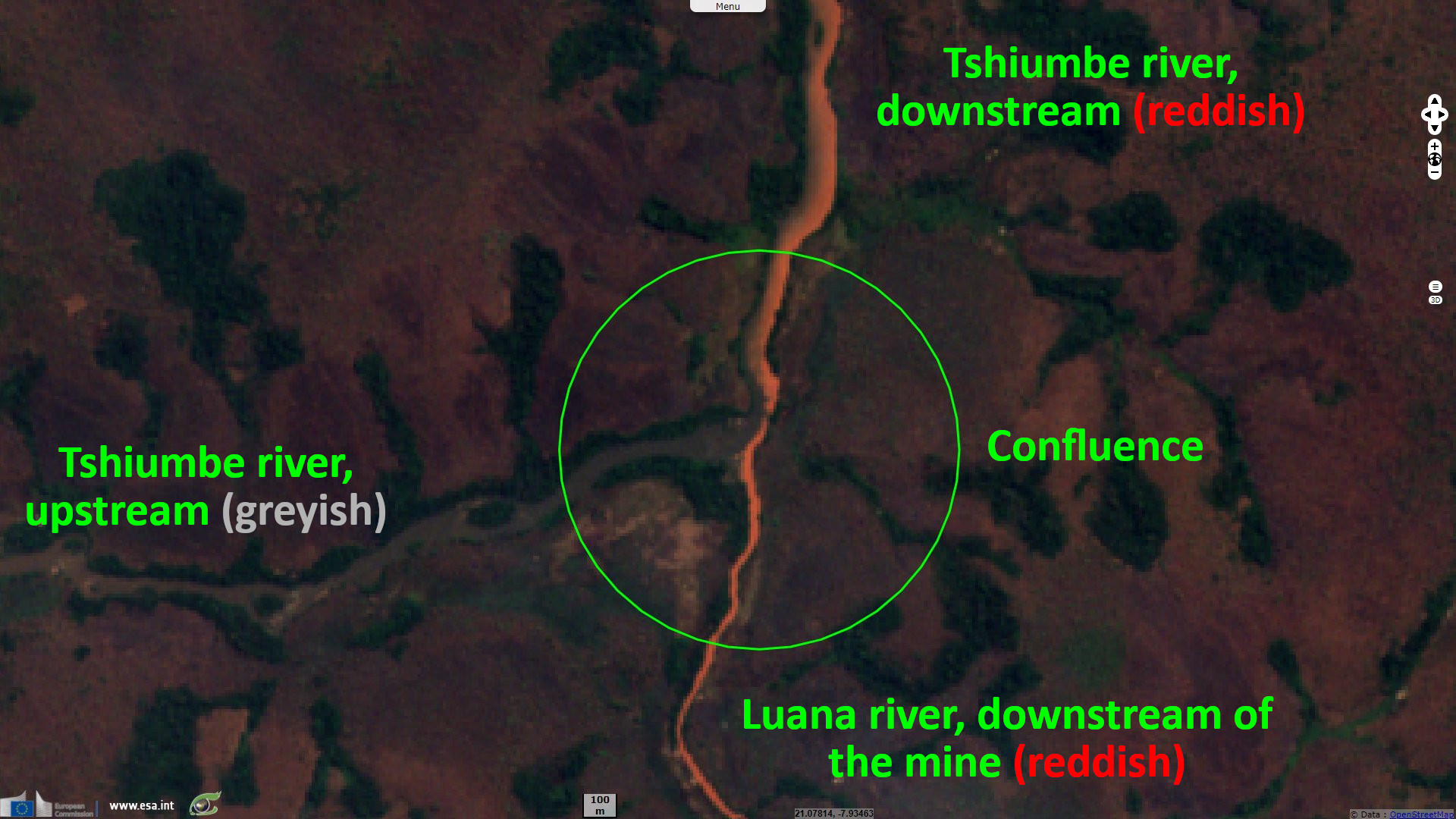 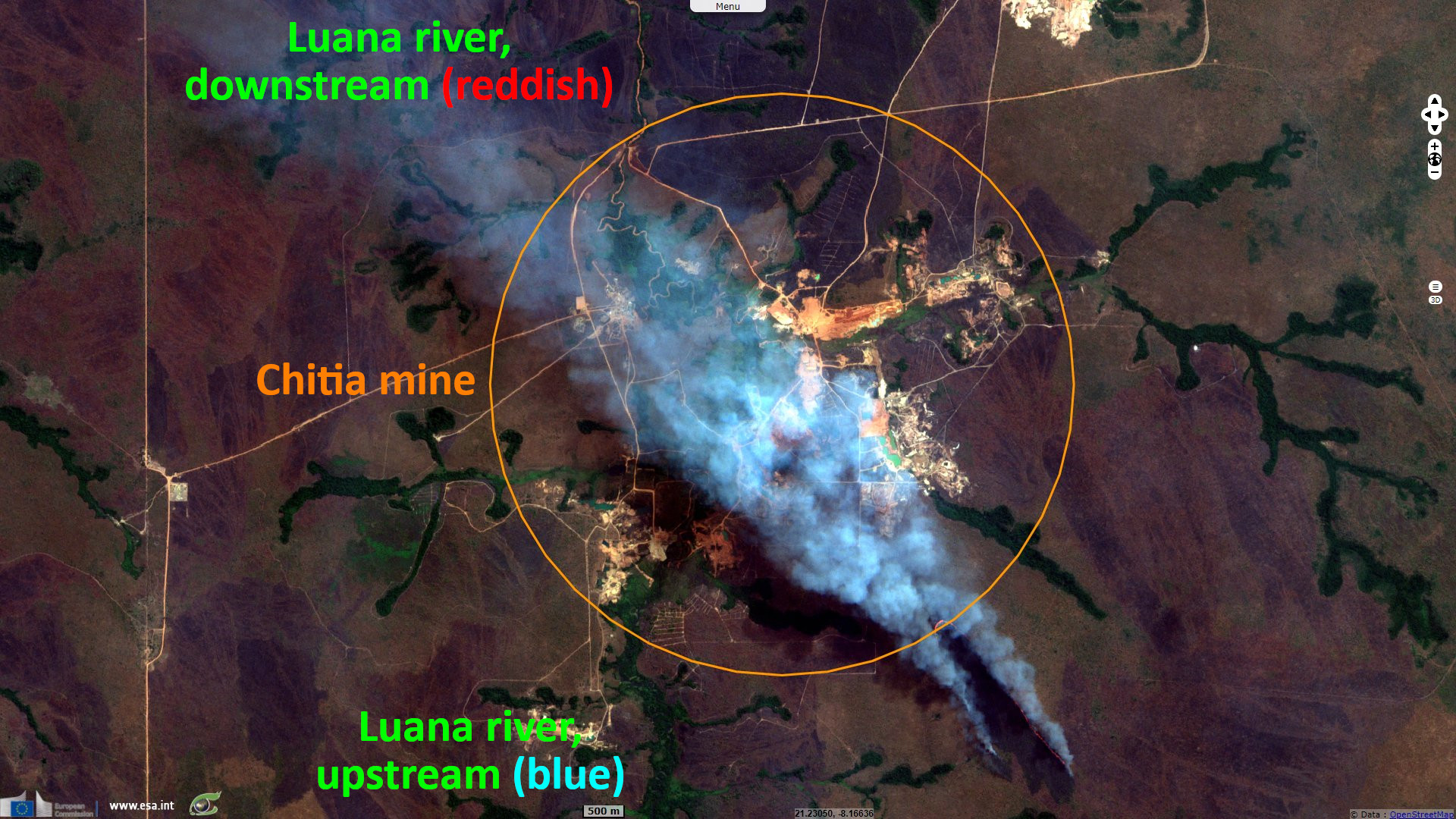