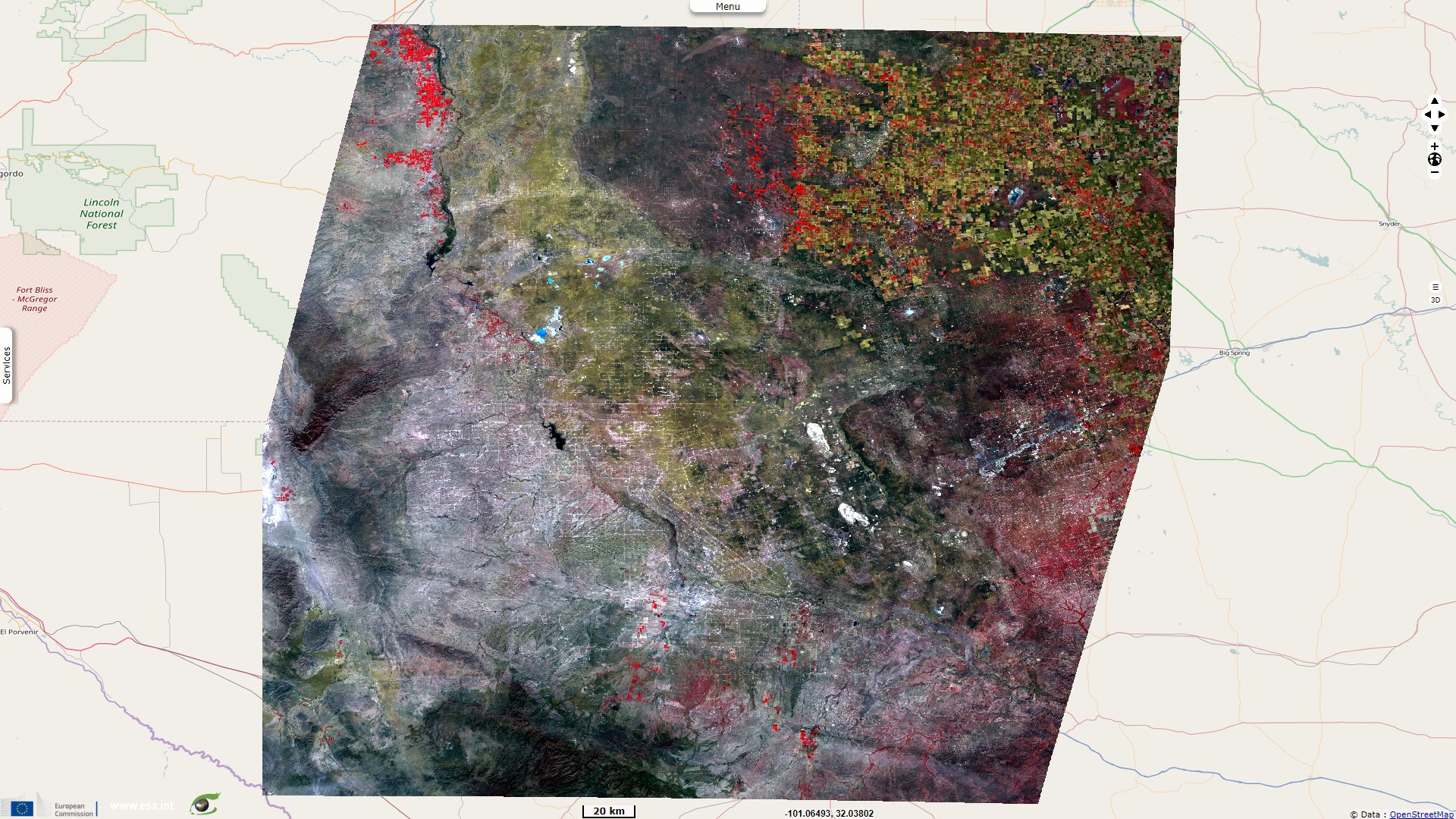 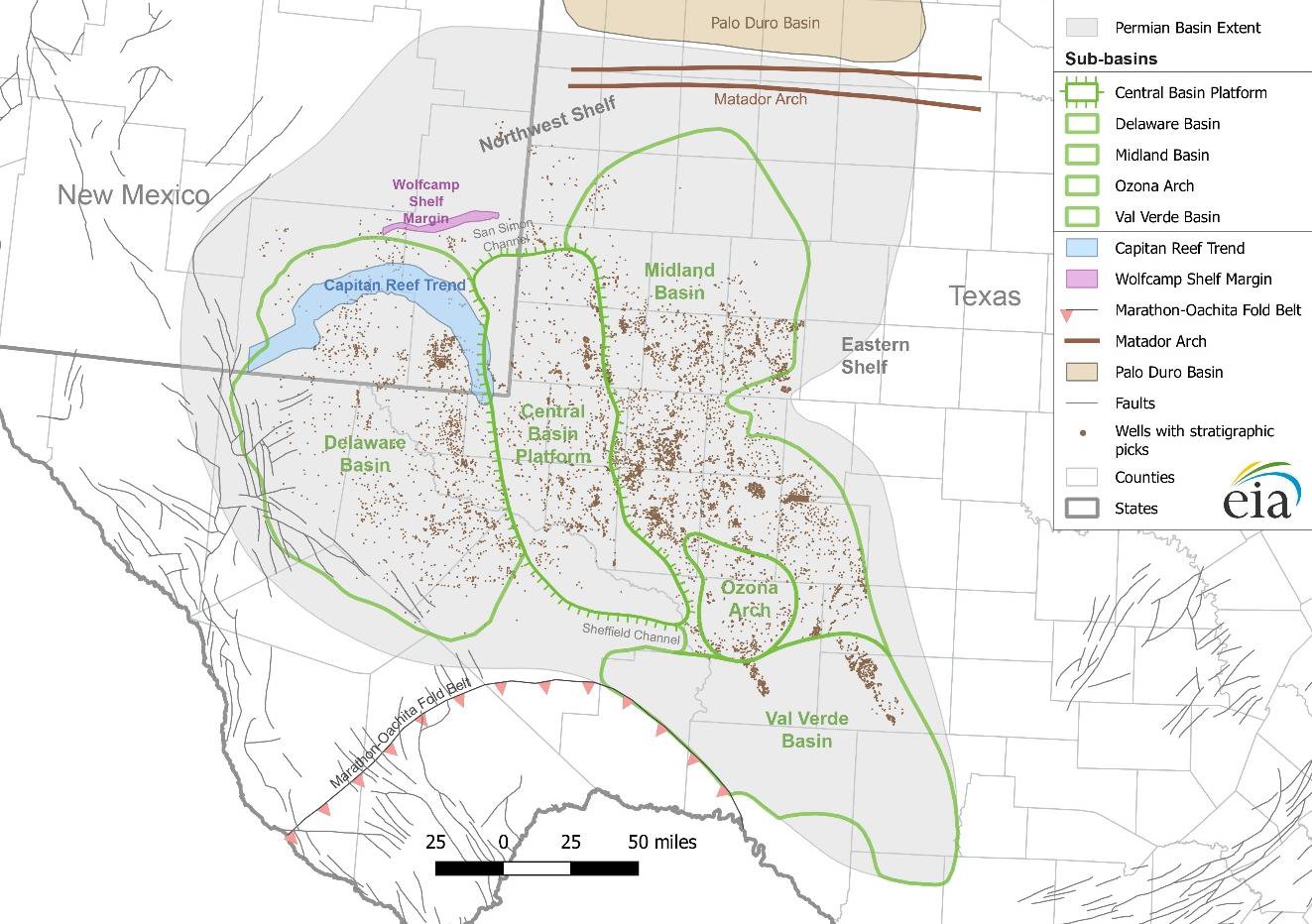 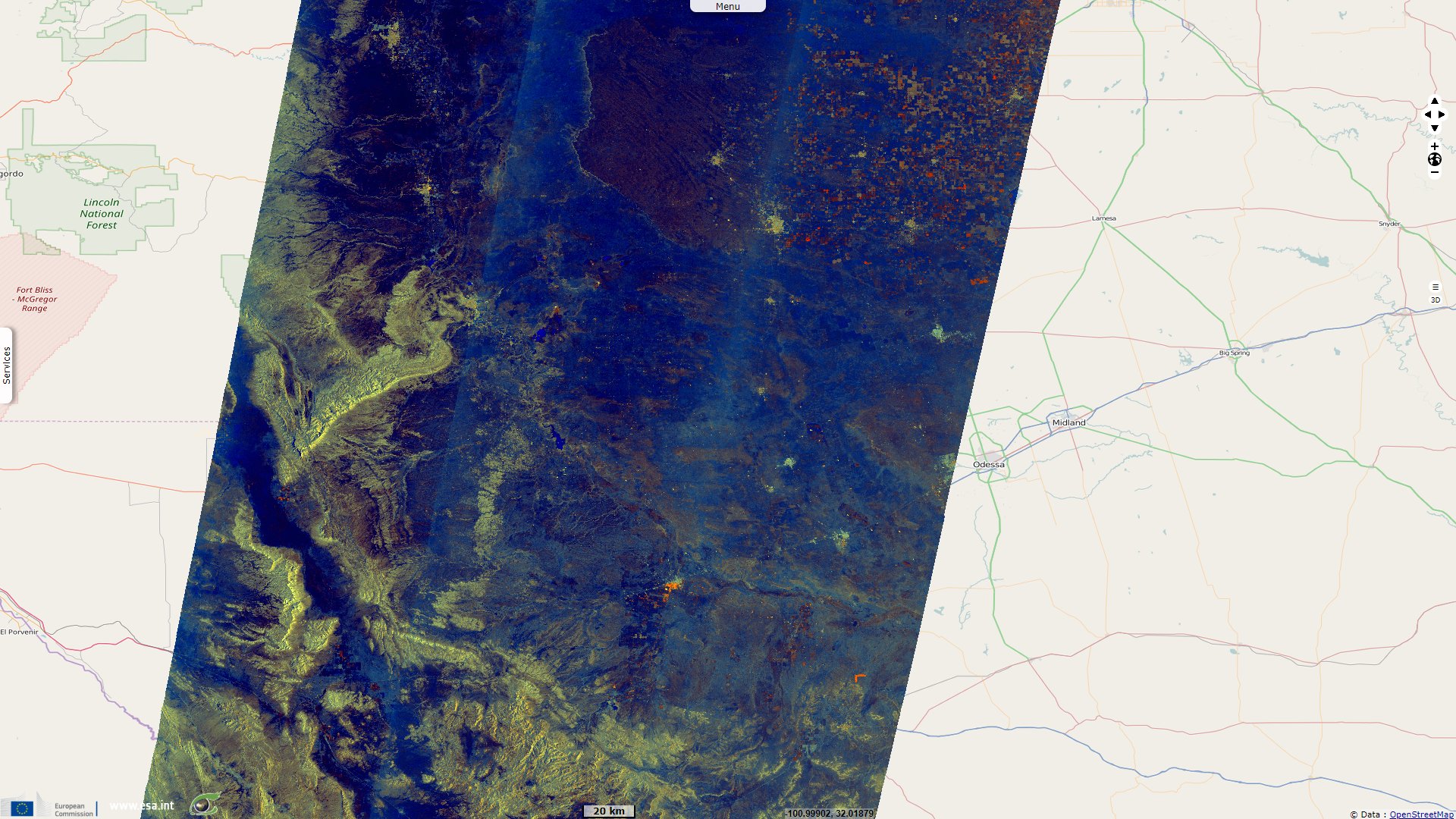 In the Permian Basin Wolfcamp shale play geology review, the US Energy Information Administration wrote: "The Permian Basin of West Texas and Southeast New Mexico has generated hydrocarbons for about 100 years and supplied more than 33.4 billion barrels of oil and about [3.2 trillion m³] of natural gas as of September 2018. Implementing hydraulic fracturing, horizontal drilling, and completion technology advancements during the past decade has reversed the production drop in the Permian, and the basin has exceeded its previous peak in the early 1970s. In 2017, it accounted for 20% of the total U.S. crude oil production and about 9% of the total U.S. dry natural gas production. For 2016, EIA estimates remaining proven reserves in the Permian Basin to exceed 5 billion barrels of oil and [0.52 trillion m³] of natural gas, making it one of the largest hydrocarbon-producing basins in the United States and the world (EIA, 2017)."
Fig. 3 - S2 (01.04.2019) - 12,11,4 colour composite - It lies between the irrigated agriculture of Texas & the drier plateau of New Mexico.
2D view 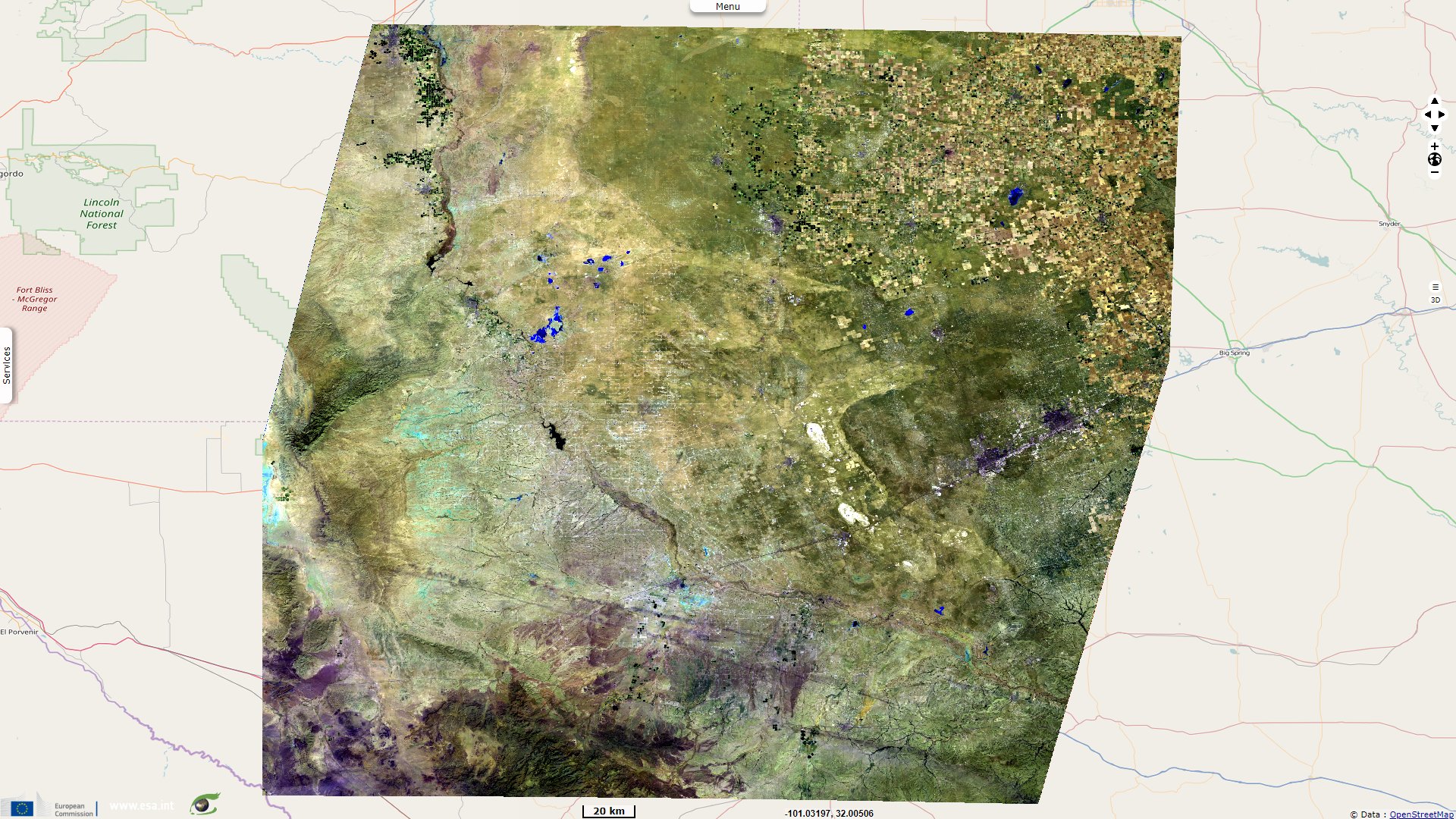 "The Permian Basin is a complex sedimentary system located in the foreland of the Marathon–Ouachita orogenic belt. It covers an area of more than 200 000 square kilometers and extends across 52 counties in West Texas and Southeast New Mexico. The Permian Basin was developed in the open marine area known as the Tobosa Basin in the middle Carboniferous period approximately 325 million–320 million years ago (Galley, 1958). The ancestral Tobosa Basin was formed by an asymmetric structural flexure in the Precambrian basement at the southern margin of the North American plate in late Proterozoic time (Beamont, 1981; Jordan 1981). During consequent phases of basin development, sediments eroded from the surrounding highlands and were deposited in the basin (Brown et al., 1973; Dorobek et al., 1991)." 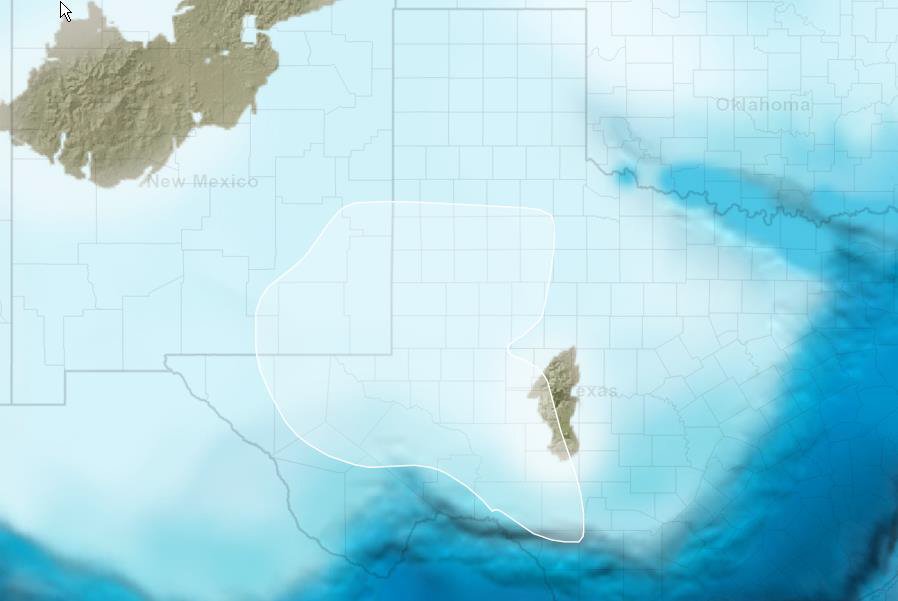 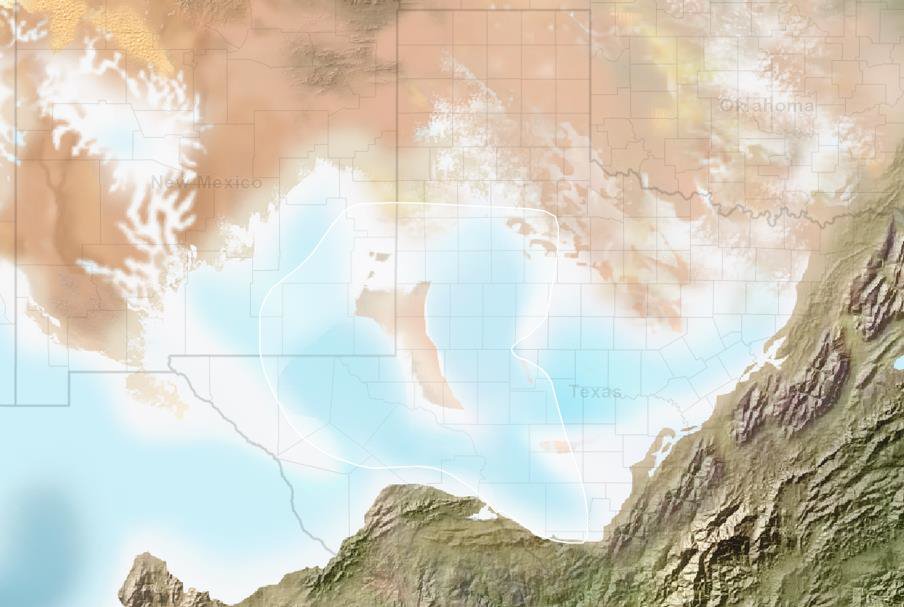 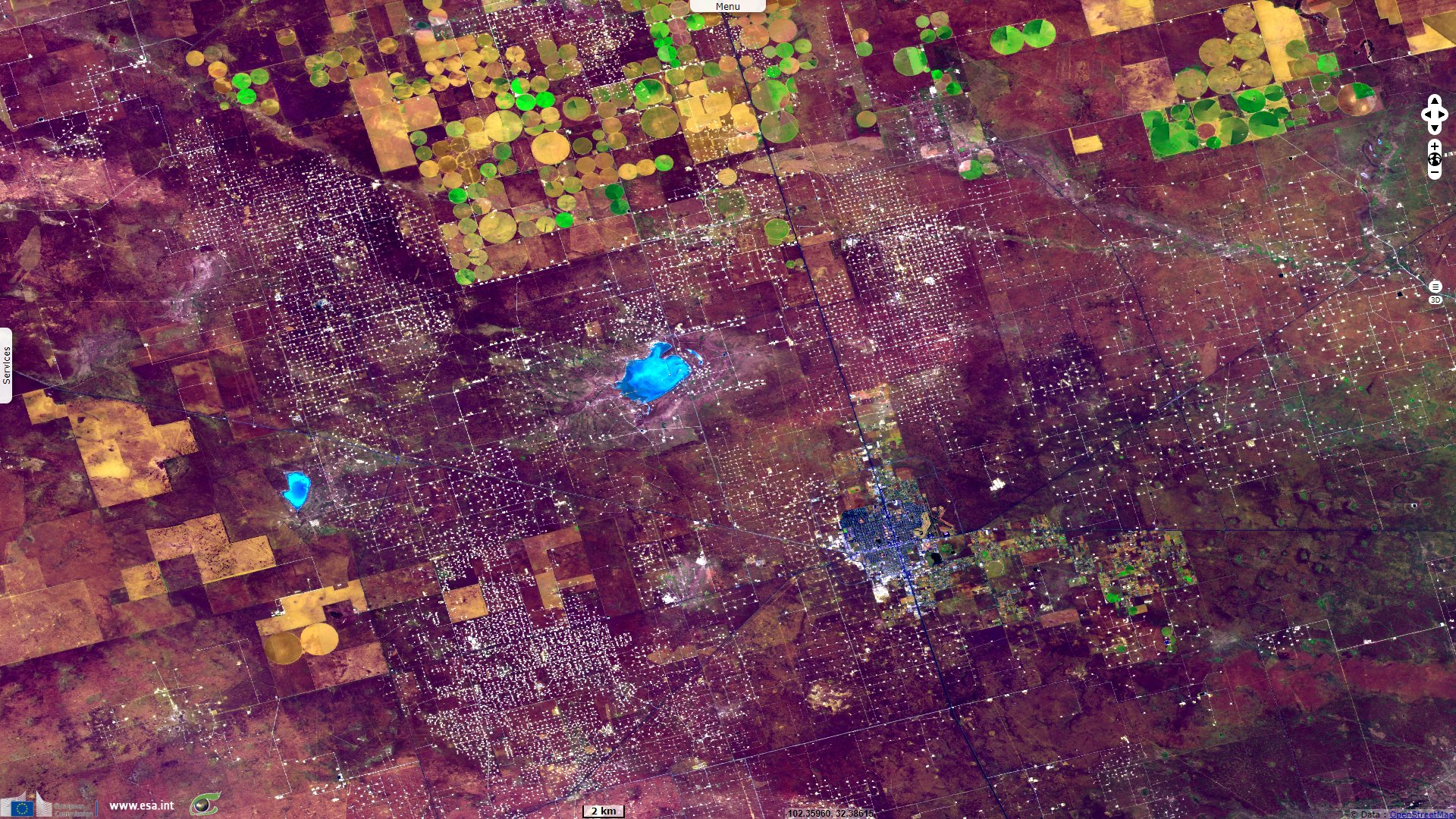 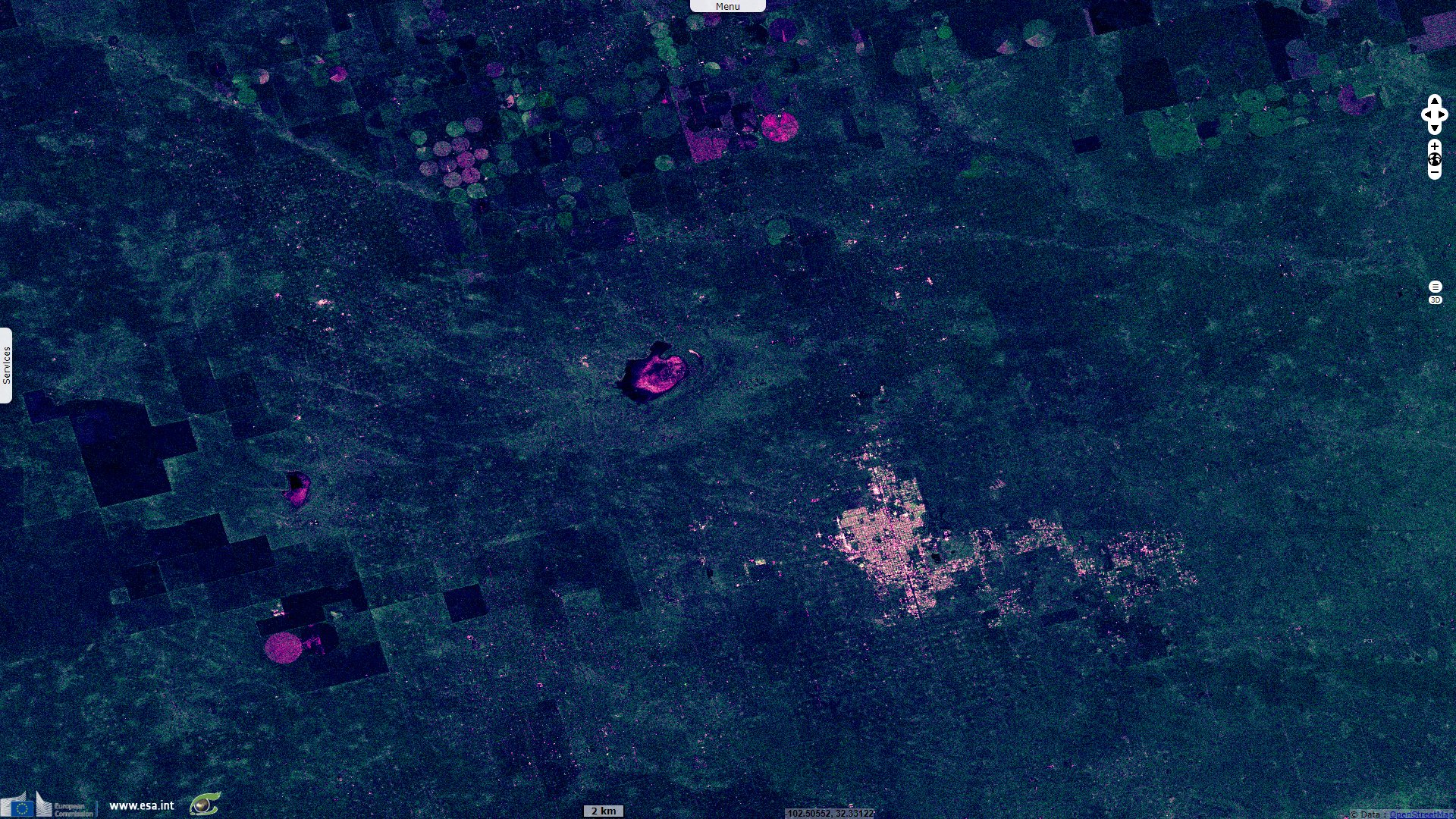 "Late last week, Saudi Arabia, the rest of OPEC and Russia failed to agree on production cuts to combat falling prices because of fears that the coronavirus epidemic will halt world economic growth. Oil prices were down more than 30% this year before Sunday's collapse. U.S. consumers are likely to see lower prices at the gas pump, but American oil producers — who lead the world in output — could be hurt by the oil price slide. Economies from China to Italy have ground to a halt as quarantines shut down factories and demand for products and services craters."
Fig. 6 - S2 (01.04.2019) - 11,8,2 colour composite - Tiling of space around Hobbs.
2D view 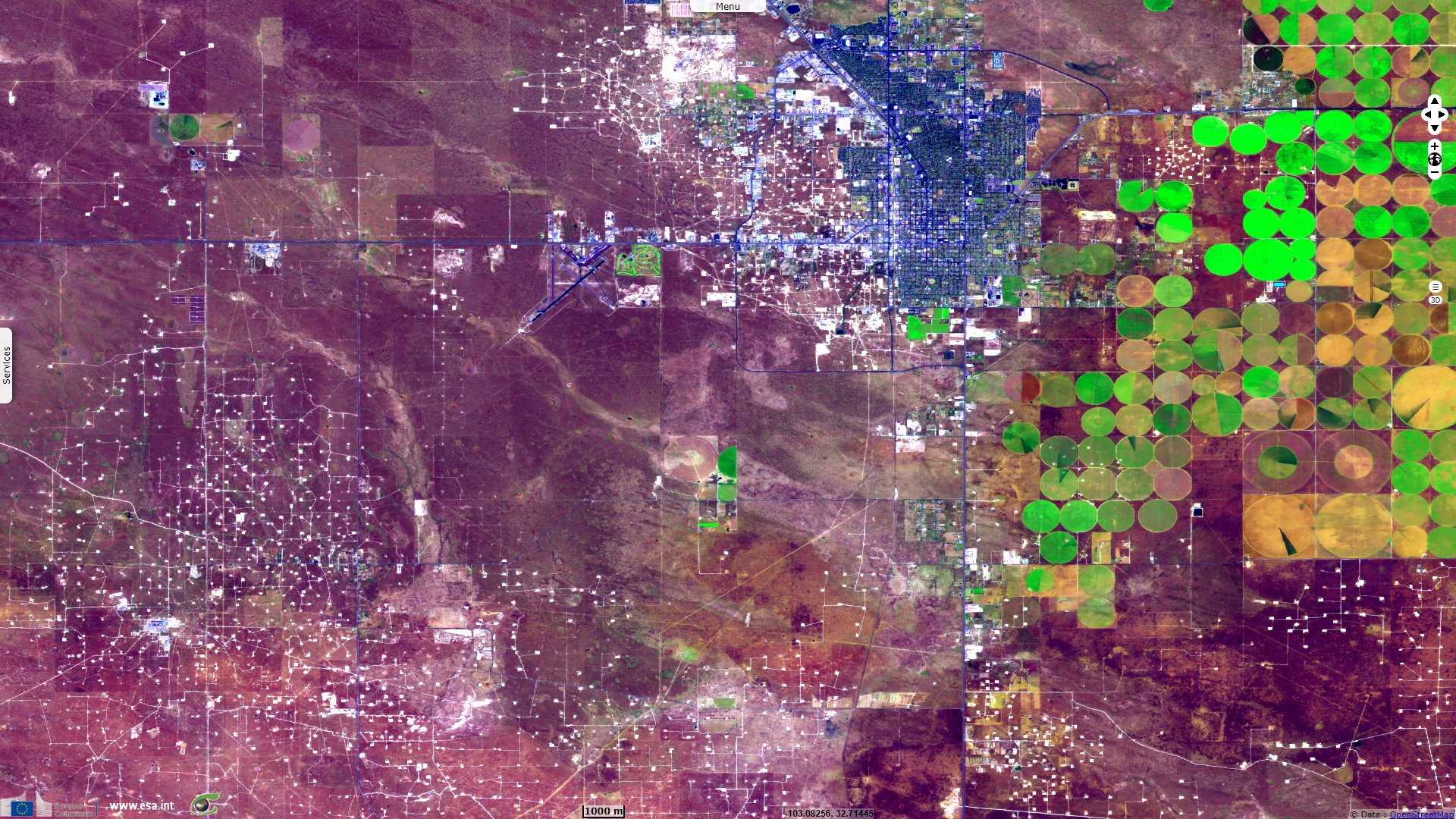 "Saudi Arabia and other OPEC members sought to cut production to shore up oil prices. But the once-powerful cartel can no longer move markets alone. It needs the support of Russia, which is not an OPEC member but has recently been coordinating with the organization. Yet Russia has resisted calls for production cuts. On Friday, the talks ended in failure. OPEC and its allies announced no new reductions and didn't even commit to extending current cuts."
Fig. 7 - S2 (01.04.2019) - 4,3,2 natural colour - The characteristic forms of oil structure become more prevalent on the plateau further west.
2D view 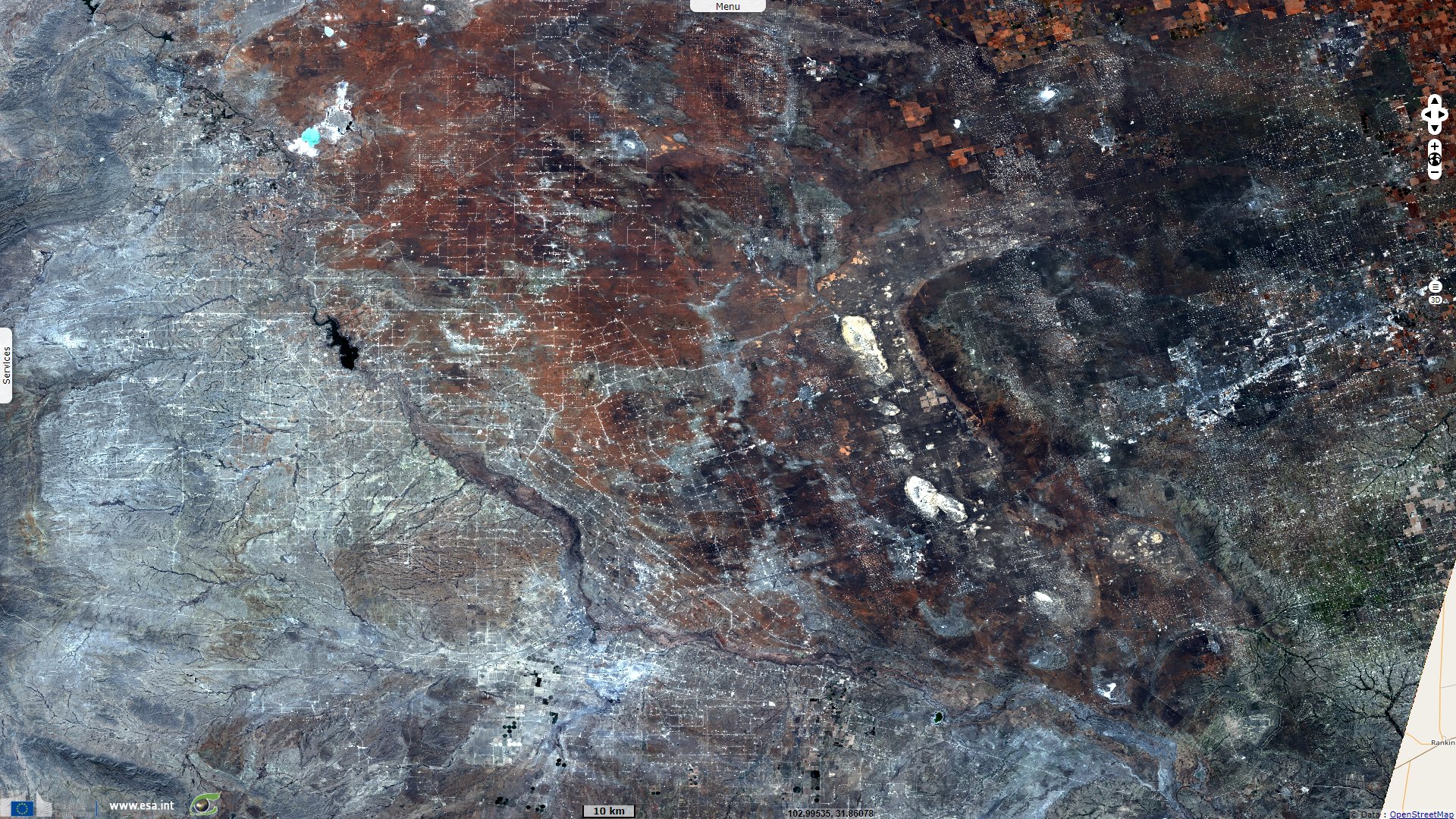 "So, Saudi Arabia, the world's second-largest producer, this weekend said it will actually boost oil production instead of cutting it to stem falling prices, in a dramatic reversal in policy. If it can't get the price back up, it's going to drive the price way down. It's offering to cut the oil price for the U.S. market by $7 per barrel, to Europe by $8 and Asia by $6. Paired with Saudi Arabia's ability to rapidly increase production — flooding the market with cheap crude — those unilateral price cuts will push the price of oil down for everyone."
Fig. 8 - S2 (01.04.2019) - 8,4,3 colour composite - Zoom on a production area.
2D view 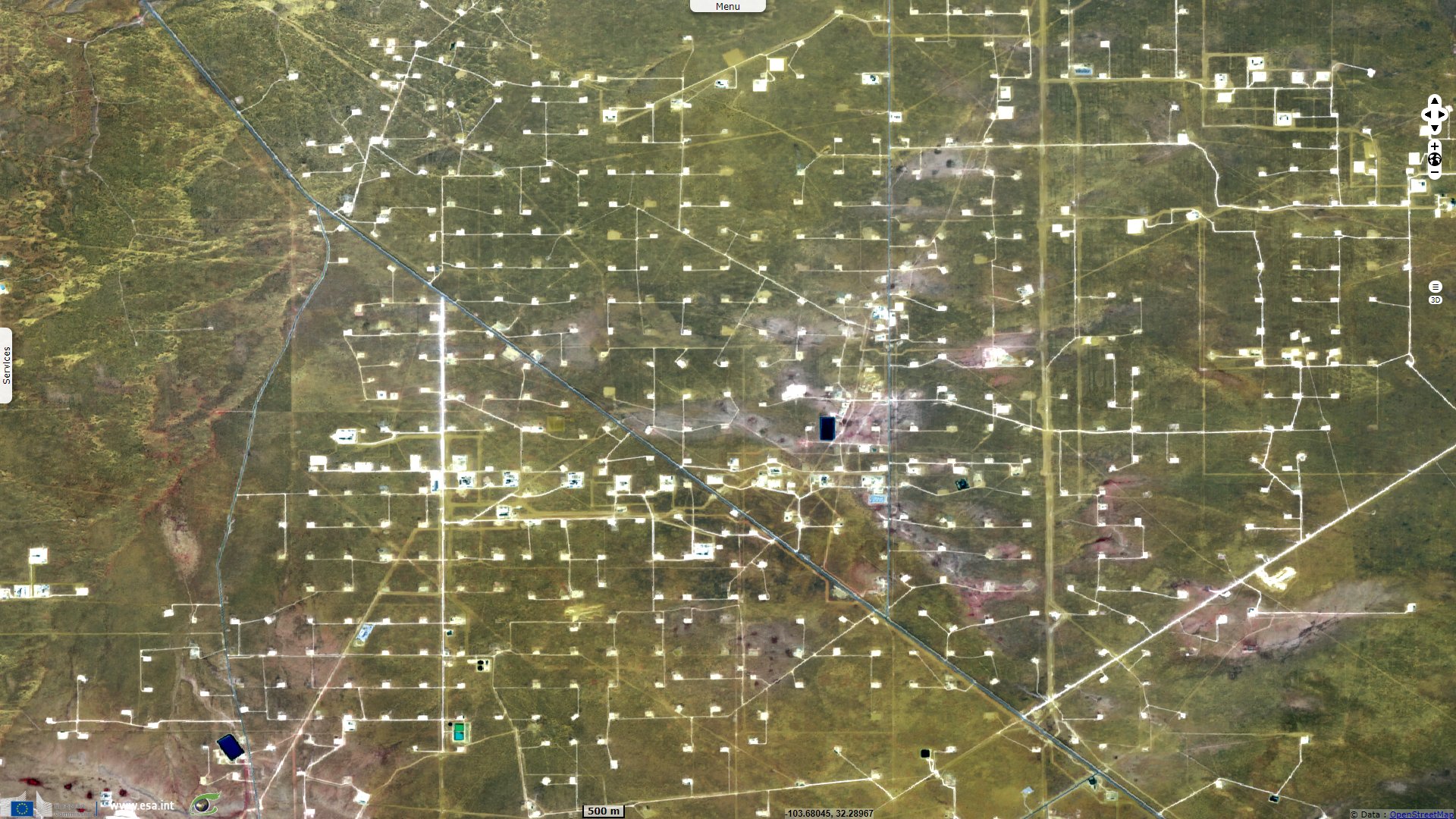 "Low oil prices are bad for Saudi Arabia's budget, and the price of the Saudi oil company Aramco's stock tumbled below its initial public offering price on Sunday. But, because Saudi Arabia's production costs are the lowest in the world, lower prices can hit other producers harder. Russia seems to be the target of this price war. But as Saudi Arabia tries to grab market share with bargain-basement prices, American oil and gas producers, including the fracking industry, will also feel pain."
Fig. 9 - S1 (30.01.2019) - vv,vh,vv colour composite - Same view in radar.
2D view 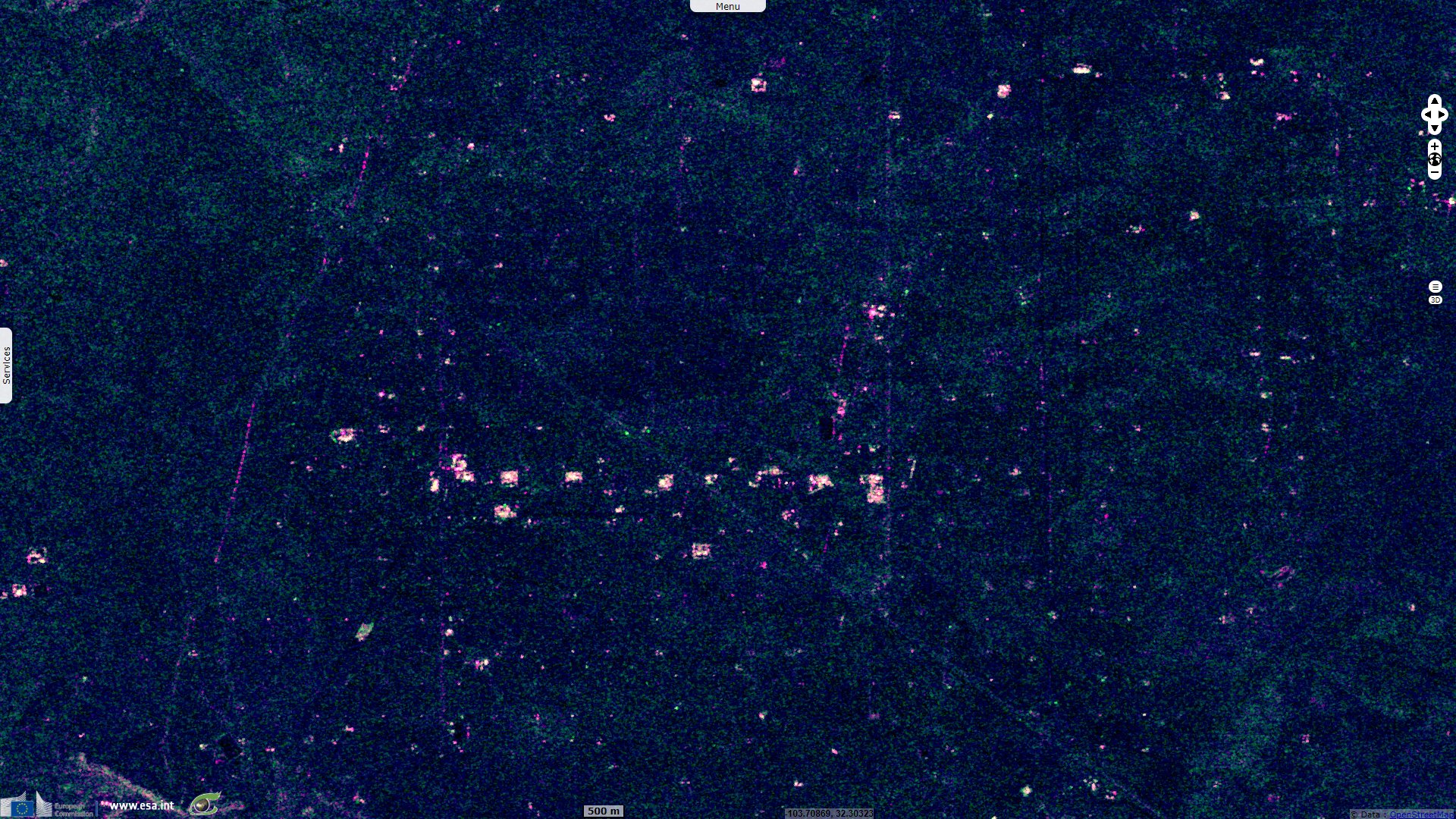 In an editorial released on 10.04.2020, oilprice.com showed the impact of plunging oil price in the US: "The collapse of oil prices has already led to the removal of more than 150 rigs in just three weeks. This year, the number of newly completed wells coming online could fall to its lowest level in more than a decade at less than 9000, according to Rystad Energy and Qz.com. Already, seven oil and gas companies have filed for bankruptcy in 2020, a figure that could balloon with WTI under $30 per barrel. U.S oil production fell by 600 000 barils per day last week, evidence that the hit to output has already begun."
The views expressed herein can in no way be taken to reflect the official opinion of the European Space Agency or the European Union.
Contains modified Copernicus Sentinel data 2021, processed by VisioTerra.