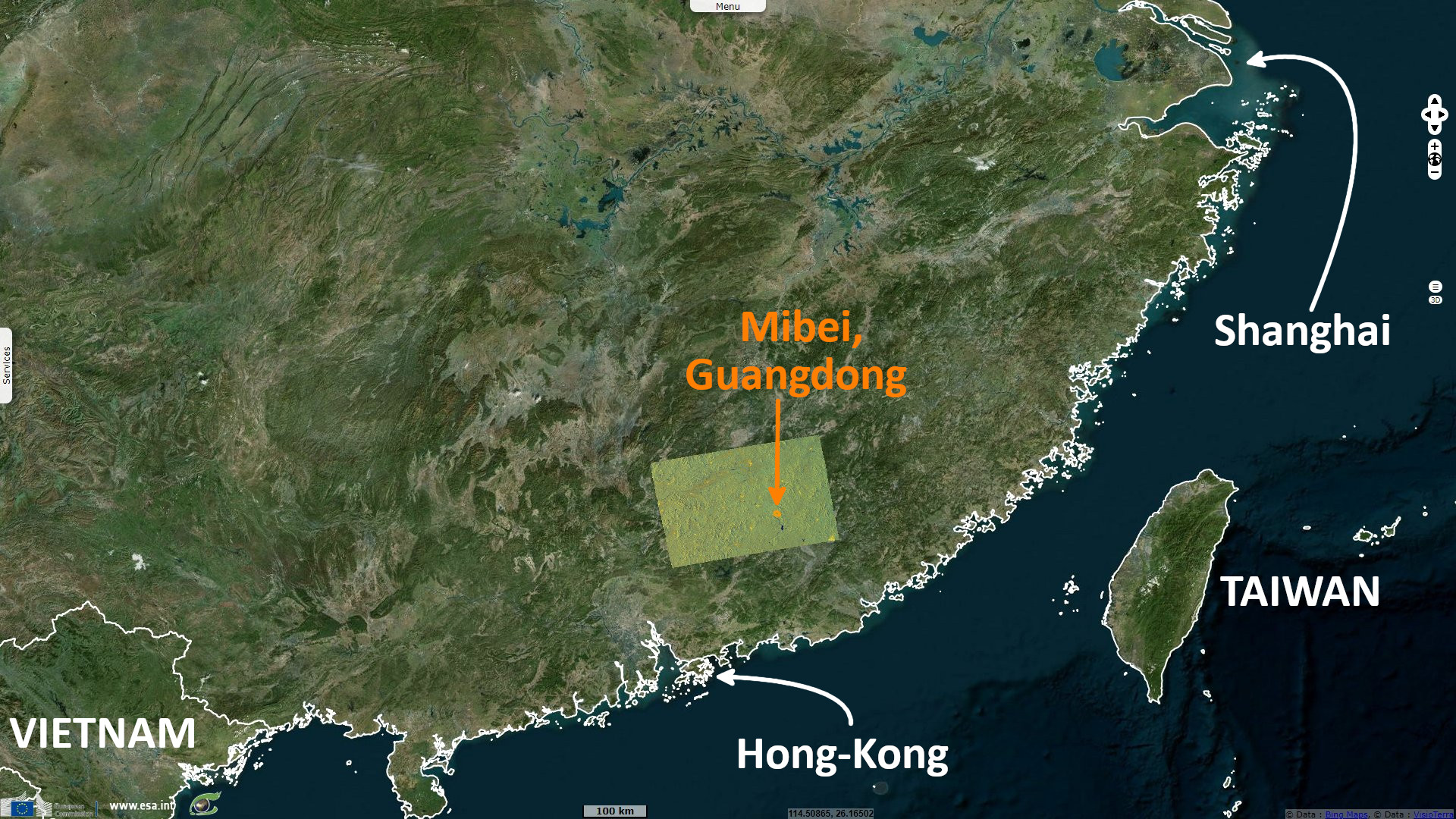 On 1 June 2021, Huilin Bai published the article Group-occurring landslides and debris ﬂows caused by the continuous heavy rainfall in June 2019 in Mibei Village, Longchuan County, Guangdong Province, China. It relates the mecanism that lead to hundreds of landslides in that village, already hit by a smaller event in 2014 that killed one person. Retrospectiveley, it highlights how timely evacuations prevented the population from being wounded or killed by the event: "The southeast coastal area of China is located in the subtropical monsoon climate zone, with frequent typhoons and rainstorms. The average annual rainfall ranges from 1300 to 2500 mm. The landslide and debris ﬂow caused by rain are the most common types of geological hazard in this area, and show the characteristics of the small scale of individual hazard point, a large number of groups, and wide distribution range."
Fig. 2 - S1 (08.05.2019->01.06.2019 & 25.06.2019->19.07.2019) - The areas covered by the swollen rivers and lake show in cyan.
2D view 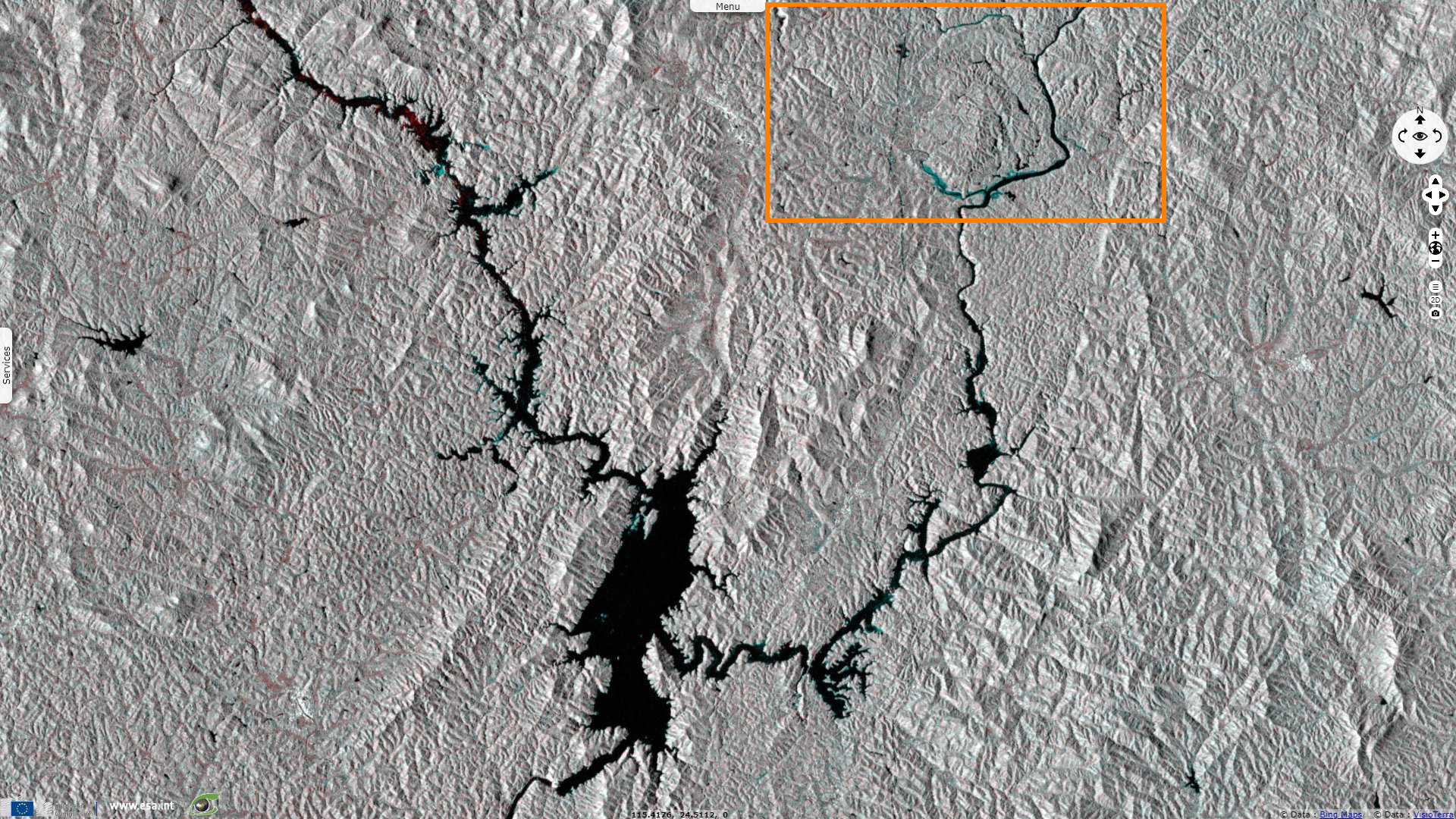 "From June 10th to 13th, 2019, there was continuous heavy rainfall for four days in Longchuan County, Guangdong Province, with accumulated rainfall of more than 260 mm. A large number of shallow landslides were triggered in the whole county. Landslide mass mainly developed in granite residual soil layer, and a small part of landslides in the gully turned into debris ﬂow. The direct economic loss of the whole county reached 1.545 billion yuan [216 million euros]. In this round of heavy rainfall, Longchuan County appeared several severe disaster areas, of which Mibei Village is one of the most typical areas."
Fig. 3 - S1 (08.05.2019->01.06.2019) - Zoom on a flooded area before the event.
3D view 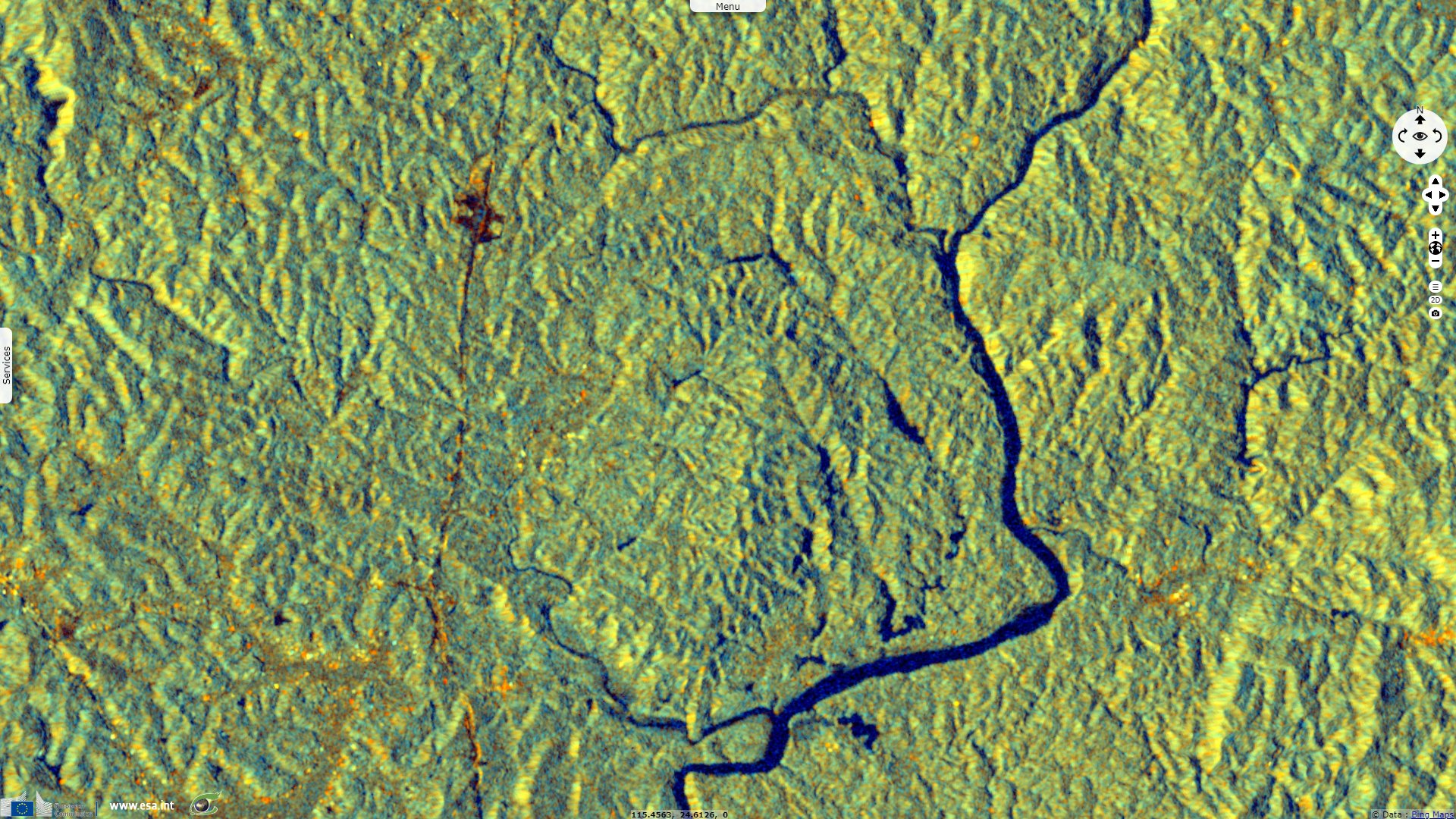 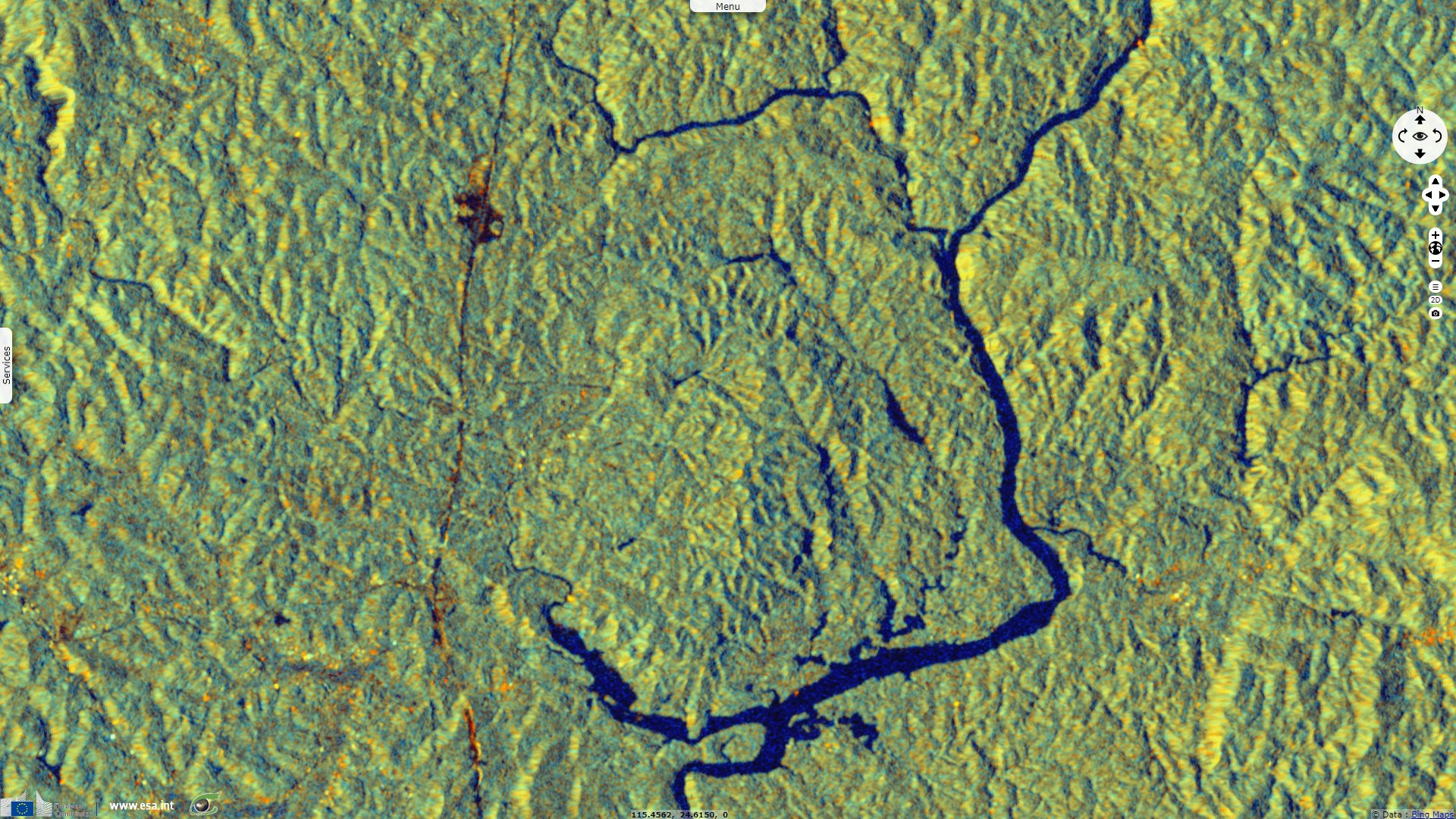 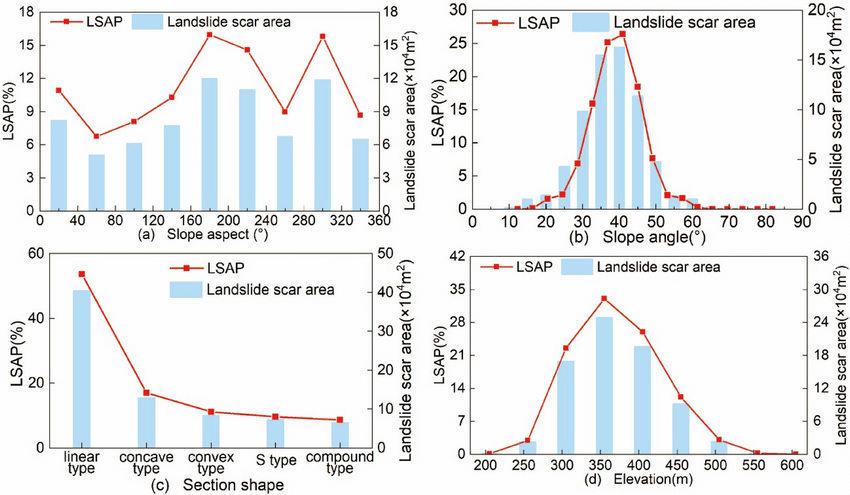 "Relationship between landslide scar area, landslide scar area percentage (LSAP) and slope aspect, slope angle, section shape, elevation. a: Slope aspect; b: slope angle; c: section shape; d: elevation" - Source: Huilin Bai
"The study area belongs to the low mountain and hilly terrain, and the uneven distribution characteristics of rainfall caused by terrain are not signiﬁcant. Therefore, there is no apparent rule between the slope aspect and landslides. According to the ALOS-DEM data analysis, the terrain slope of landslides is 35°–45°, and the section shape is the mainly linear type (accounts for 53.62%), followed by concave type. The landslides primarily occurred in the elevation range of 300–400 m. The low-altitude areas (< 300 m) are mostly gully areas with gentle terrain and undeveloped landslides, and the terrain slope of the high-altitude areas (> 400 m) is generally higher than 50°, and rainfall inﬁltration is less than surface runoﬀ. Therefore, there are few landslides in high-altitude areas. Besides, the vegetation coverage rate in the study area is higher than 90%, mainly arbor and bamboo, and almost all the landslides occurred in the vegetation-covered area. It can be seen that vegetation does not play an essential role in maintaining slope stability under such a geological environment."
Fig. 5 - COP-DEM - Digital Elevation Model of the area where the landslides happened.
2D view 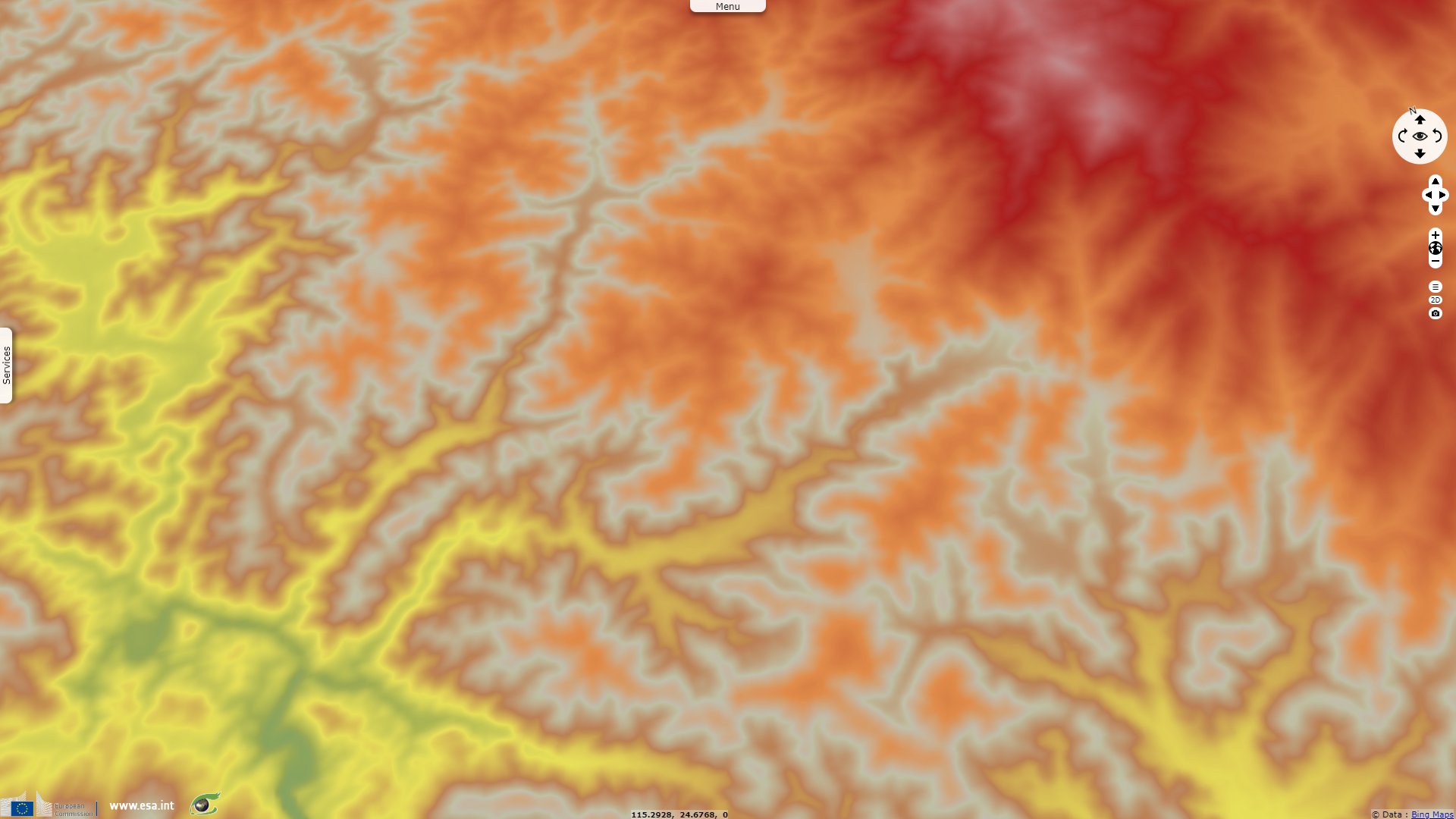 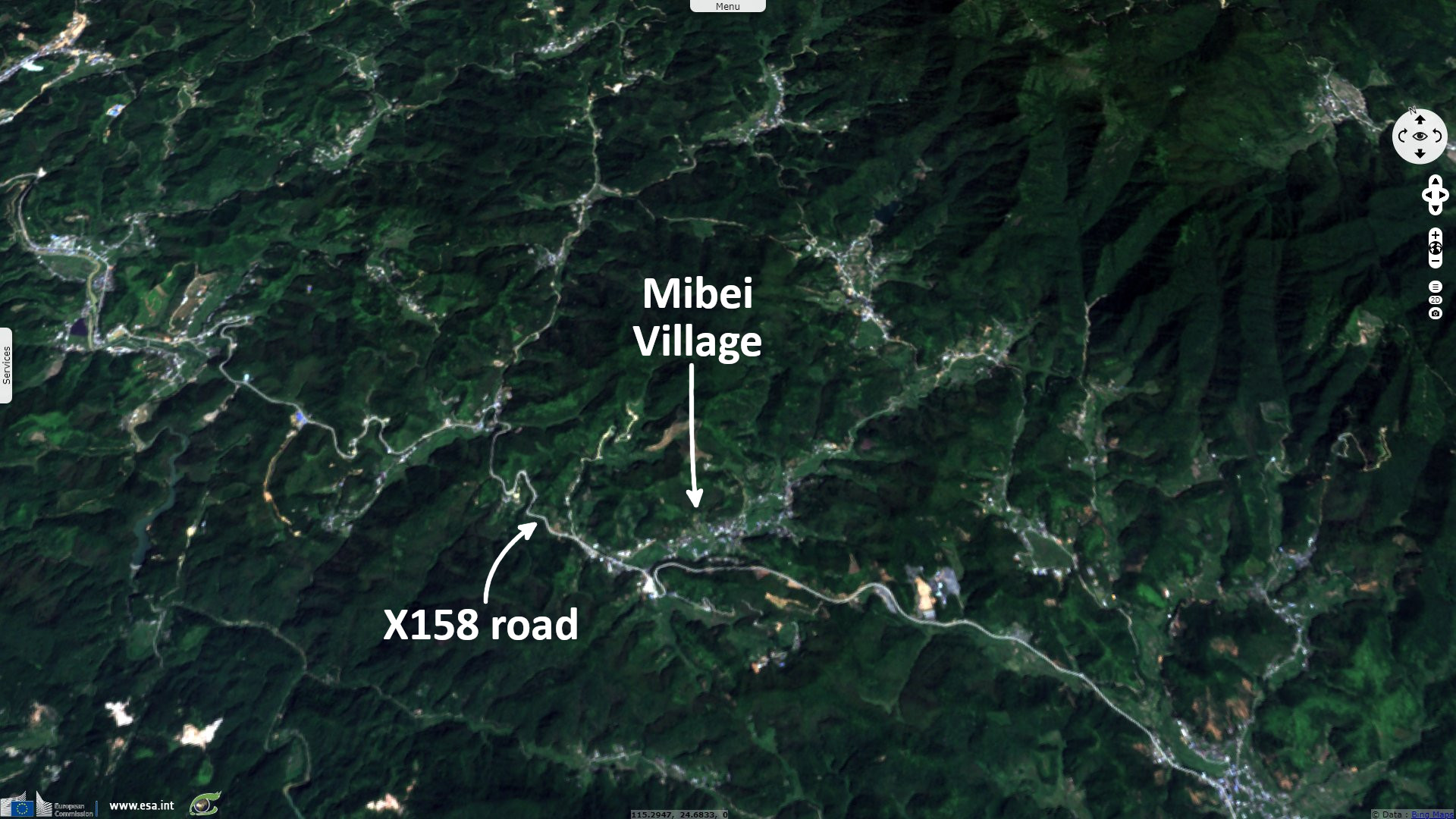 A more recent article published on 26 May 2022 by Wenkai Feng, Spatial–temporal distribution and failure mechanism of group-occurring landslides in Mibei village, Longchuan County, Guangdong, China, adds: "Continuous rainfall on June 10 and 11 was the controlling factor leading to these large number of landslides, with numerous landslides occurring from 20:00 on June 11 to 04:00 on June 13. These group-occurring landslides exhibited the characteristics of a considerable rainfall lag. The deformation and failure characteristics of the numerous observed landslides within the study area were highly similar, mainly involving traction sliding failure, and the sliding mass thickness ranged mostly from 1.5-3 m."
Fig. 7 - S2 (19.09.2019) - This cloudless image acquired after the event shows hundreds of landslide scars.
2D view 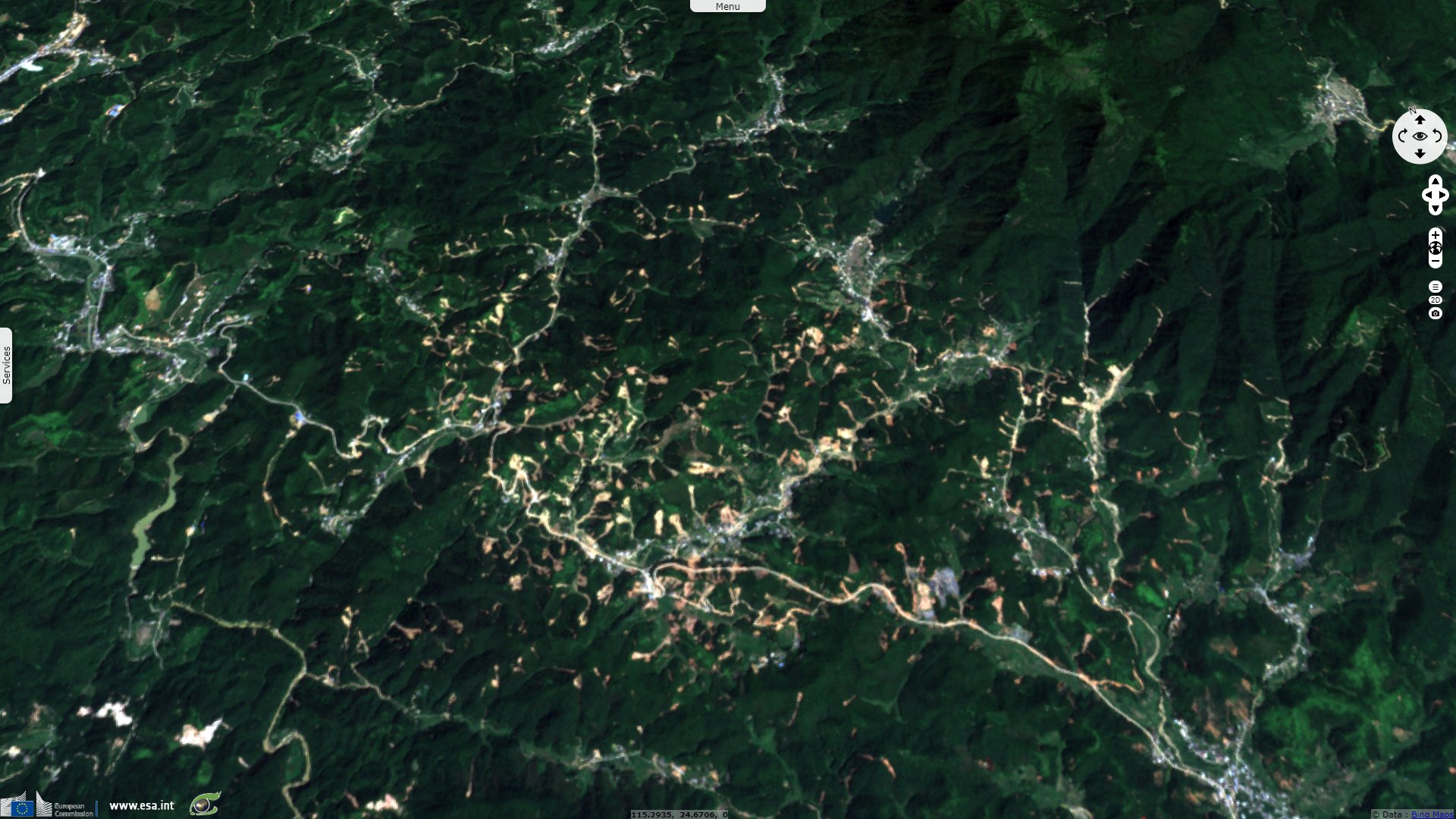 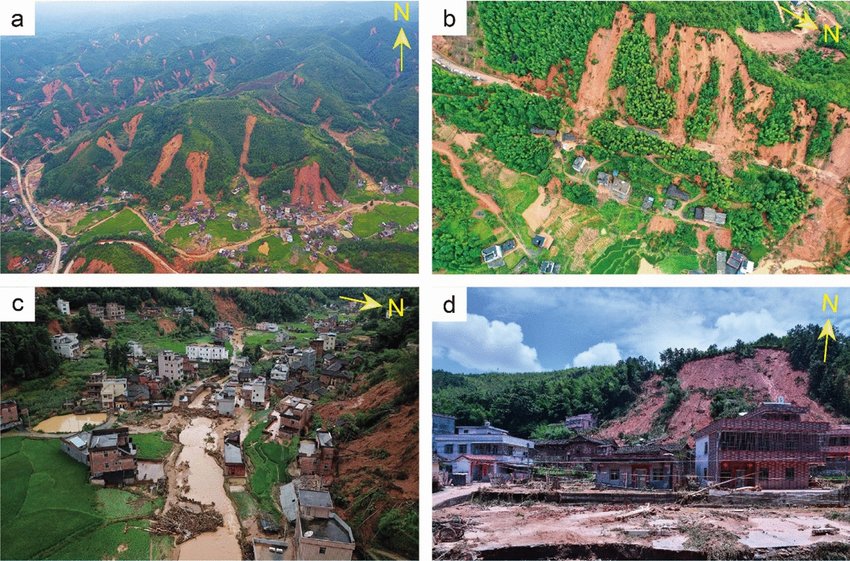 "Post-disaster photographs of Mibei Village (June 13, 2019) - Source: Huilin Bai: - a: Aerial view of Mibei Village after the disaster - Source: Hua Zhang; - b: the landslide characteristics along X158 road - Source: Xiangtao Zhang; - c: buried roads, river, farmland - Source: Mingming Tang; - d: the damage of landslide to houses - Source: Wei Xie."
"There are two types of slope structures, involving granite eluvium, a completely weathered layer, a moderately strong weathered layer, and the landslide mass is mainly granite residual soil. There are three kinds of accumulation patterns of shallow landslides: long-distance accumulation, short-distance accumulation, and accumulation of slope toe. The form of movement and accumulation is closely related to terrain and landslide spatial position. The continuous heavy rainfall led to the sharp increase in pore water content of rock and soil mass, and the shear strength and shear strength parameters of diﬀerent materials changed diﬀerently, which leads to the start-up of landslides under the spatial conditions provided by terrain and engineering activities."
Fig. 8 - S2 (04.10.2018 & 19.09.2019) - Difference image highlighting the landslide areas in white and the change of colour of the Mibei river.
2D view 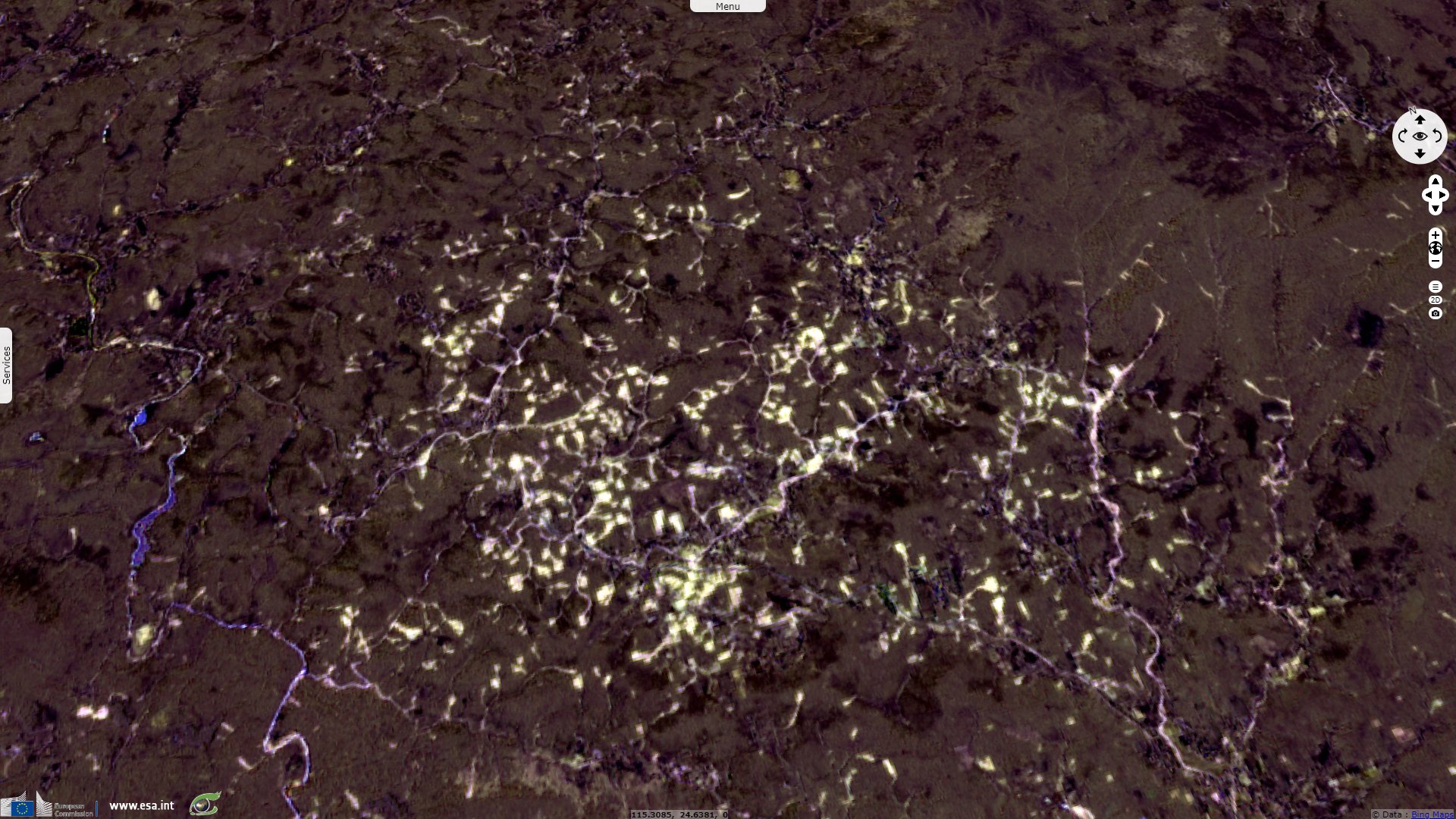 "The survey results show that there are 72 landslides along the X158 road, accounting for 22% of the total number, showing the characteristics of development along the road. It can be seen that engineering activities play an essential role in the group-occurring landslides", becoming the driving force of disaster aggravation. The inﬂuence of engineering activities on slope stability is mainly reﬂected in two aspects: one is that the slopes are not supported in time after excavation; the other is that the support measures for excavation slope are not eﬀective." "There are only four debris ﬂows in the study area. The debris ﬂow hazards are secondary disasters of landslides, all of which occurred in the short branch ditch. At present, a large number of loose deposits are distributed in the main gully, leaving hidden dangers for the later heavy rainfall." The local government reportedly evacuated 377 residents on day two of the rainstorm. This reactive evacuation likely avoided loss of human life.
The views expressed herein can in no way be taken to reflect the official opinion of the European Space Agency or the European Union.
Contains modified Copernicus Sentinel data 2022, processed by VisioTerra.