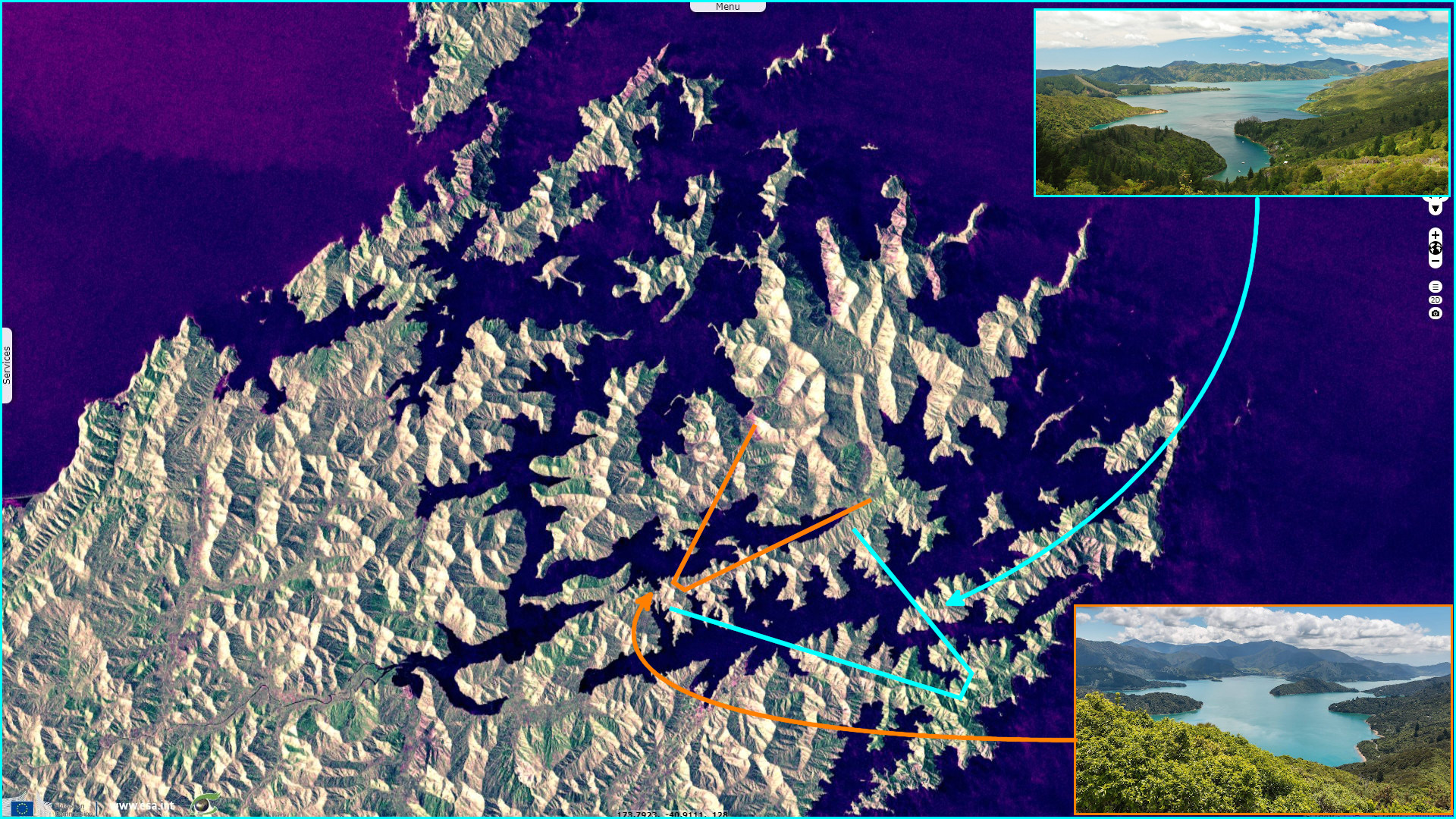 In September 2010, A. Nicol published the article Landscape history of the Marlborough Sounds, New Zealand in New Zealand Journal of Geology and Geophysics. It deals with the formation of the remarkable landscape that is the Marlborough Sounds, the the north-east tip of New Zealand South island. While it may look like a network of fjords, "The Marlborough Sounds is a large network of rias [or drowned valleys] comprising an intricate array of small inlets, coves and islands formed by drowning of a dendritic drainage system. It covers an area of c. 4000 km² and accounts for about 1/10 of New Zealand's total coastline length (i.e. c. 1500 km at 1:1,000,000 scale) (e.g. Crawford 1874; Jobberns 1935; Soons 1968; Cotton 1969; Singh 2001)."
Fig. 2 - S2 (02.06.2021) - They form an extensive network of sea-drowned valleys leaving a groupe of sounds, islands, and peninsulas.
2D view 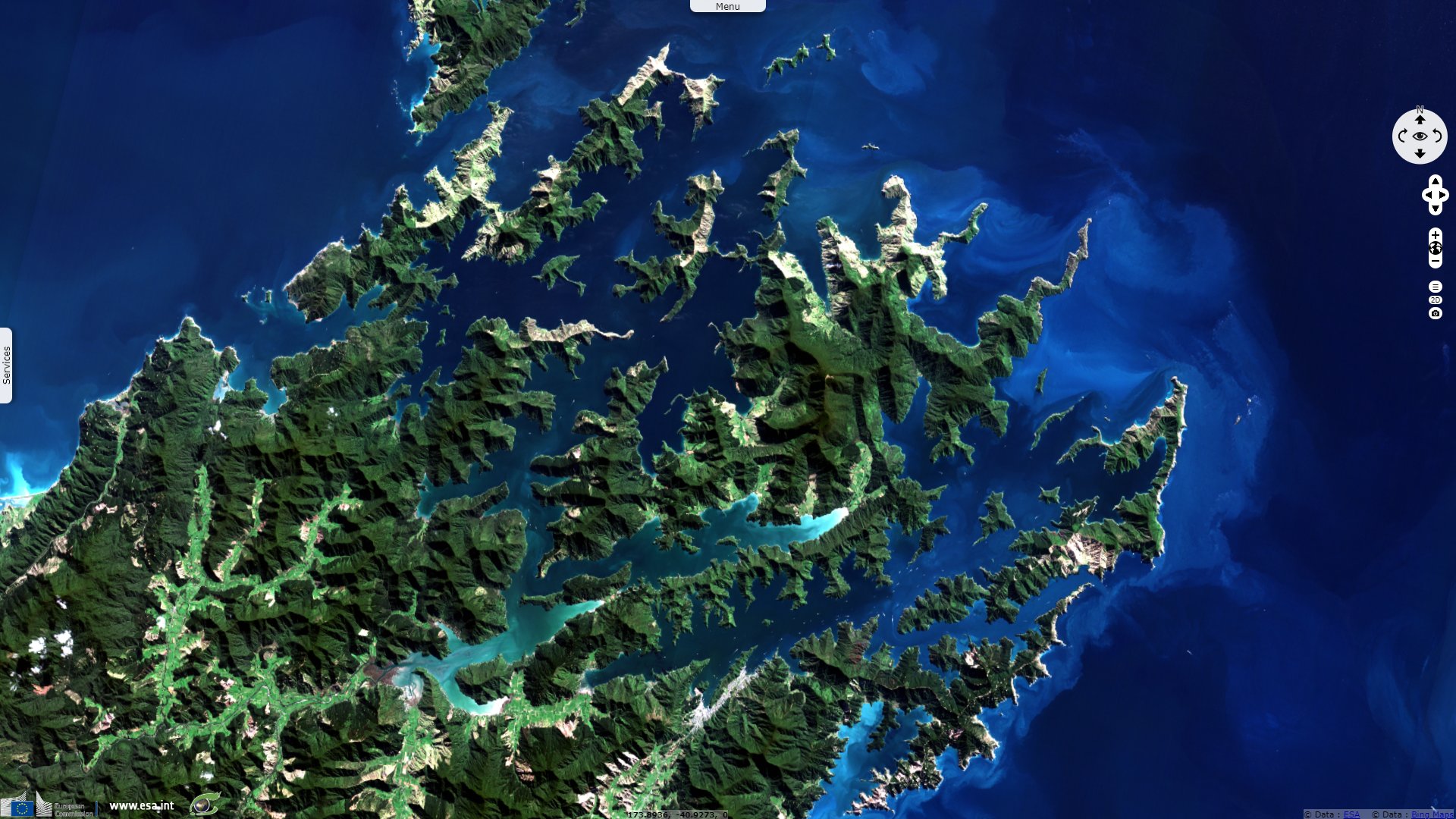 "Formation of the Sounds has been attributed to stream incision and dissection of uplifting rocks followed by marine incursion into the valleys. There is general acceptance that drowning of these valleys reflects a combination of regional subsidence associated with north-eastwards tilting of the Sounds and post-glacial sea-level rise".
Fig. 3 - S1 (13.05.2022->06.06.2022) - Department of Conservation manages over 50 reserves in the area, where the forest is a mixture of native and pine.
2D view 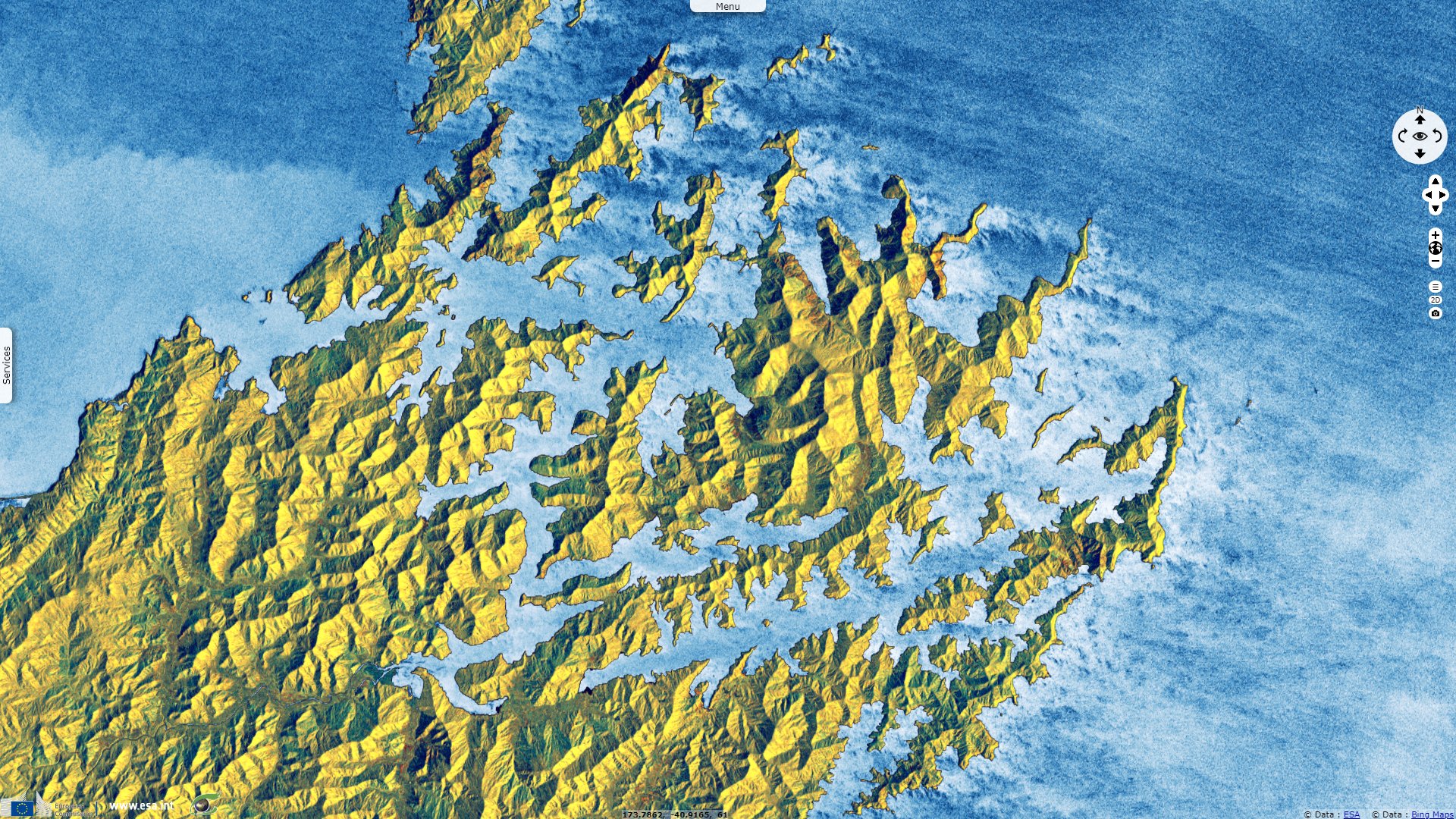 "Drainage incision produced valleys and ridges in the Sounds that were part of a mountainous region which reached maximum altitudes of c. 2000 m and extended northwards across the basin to the Wanganui coast. Sedimentary strata as old as c. 5 Ma infill this palaeotopography in the basin, suggesting that topography in the Sounds formed primarily during the Miocene [23.0 to 7.2 Mya]. This topography started to submerge in the Sounds at c. 1.5 Ma when the Wanganui Basin stepped southwards by about 50 km."
Fig. 4 - S2 (02.06.2021) - Low clouds filled many valleys on this acquisition.
2D view 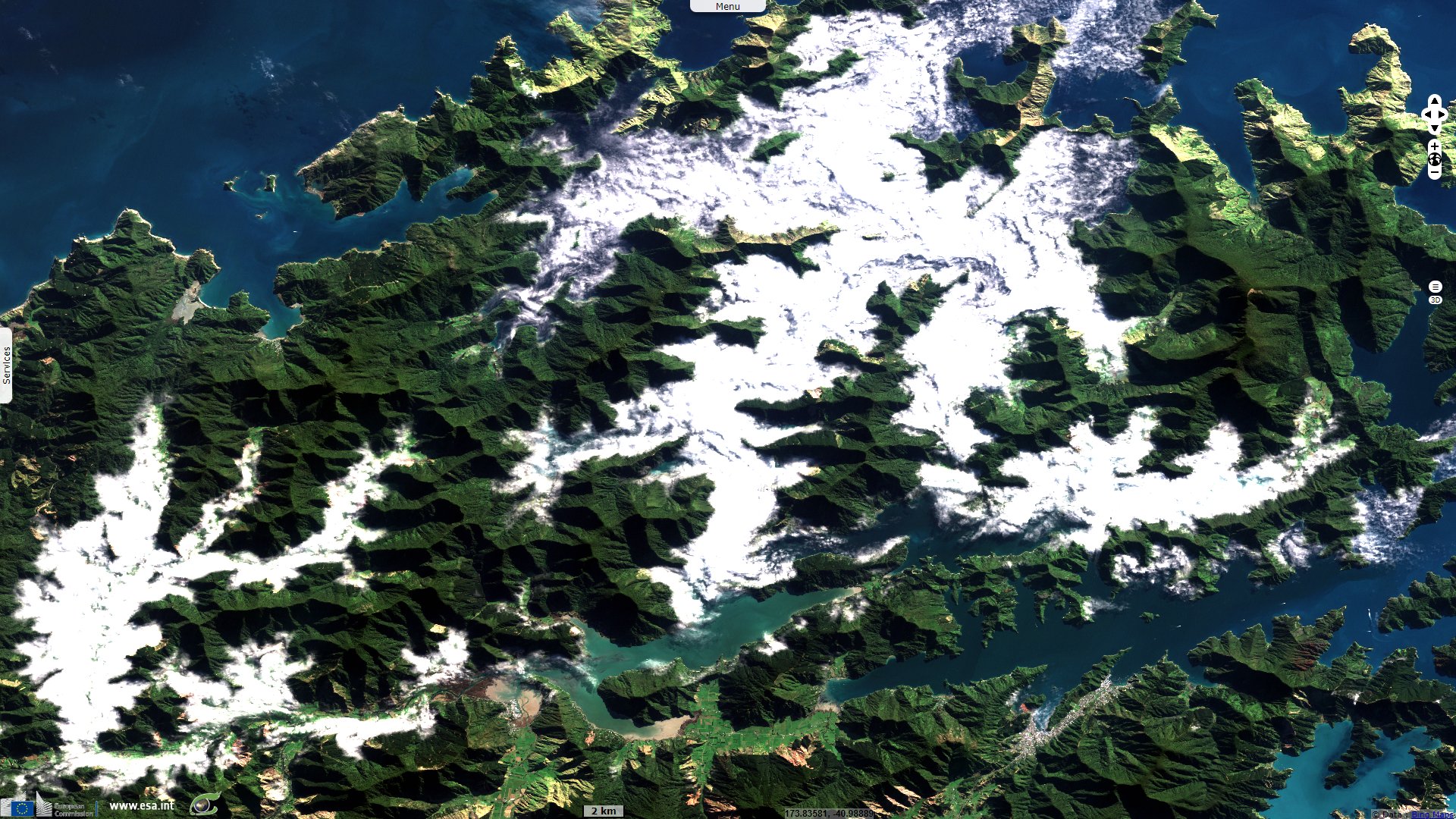 "At the present outer edge of the Sounds, the average rates of subsidence since this time have been low (c. 0.3 mm a−1) and the resulting accommodation space in the valley system filled by sediments. As a consequence of sedimentation, the absolute altitude of valley floors remained approximately constant relative to a fixed earth datum. Thus, while subsidence was important for bringing strongly dissected topography close to sea level, isostatic sea-level rises are inferred not to have been responsible for submergence of the Sounds region."
Fig. 5 - S2 (10.09.2021) - Stark difference of water colour between cropland-filled valleys to the next, hardly inhabited ones.
3D view 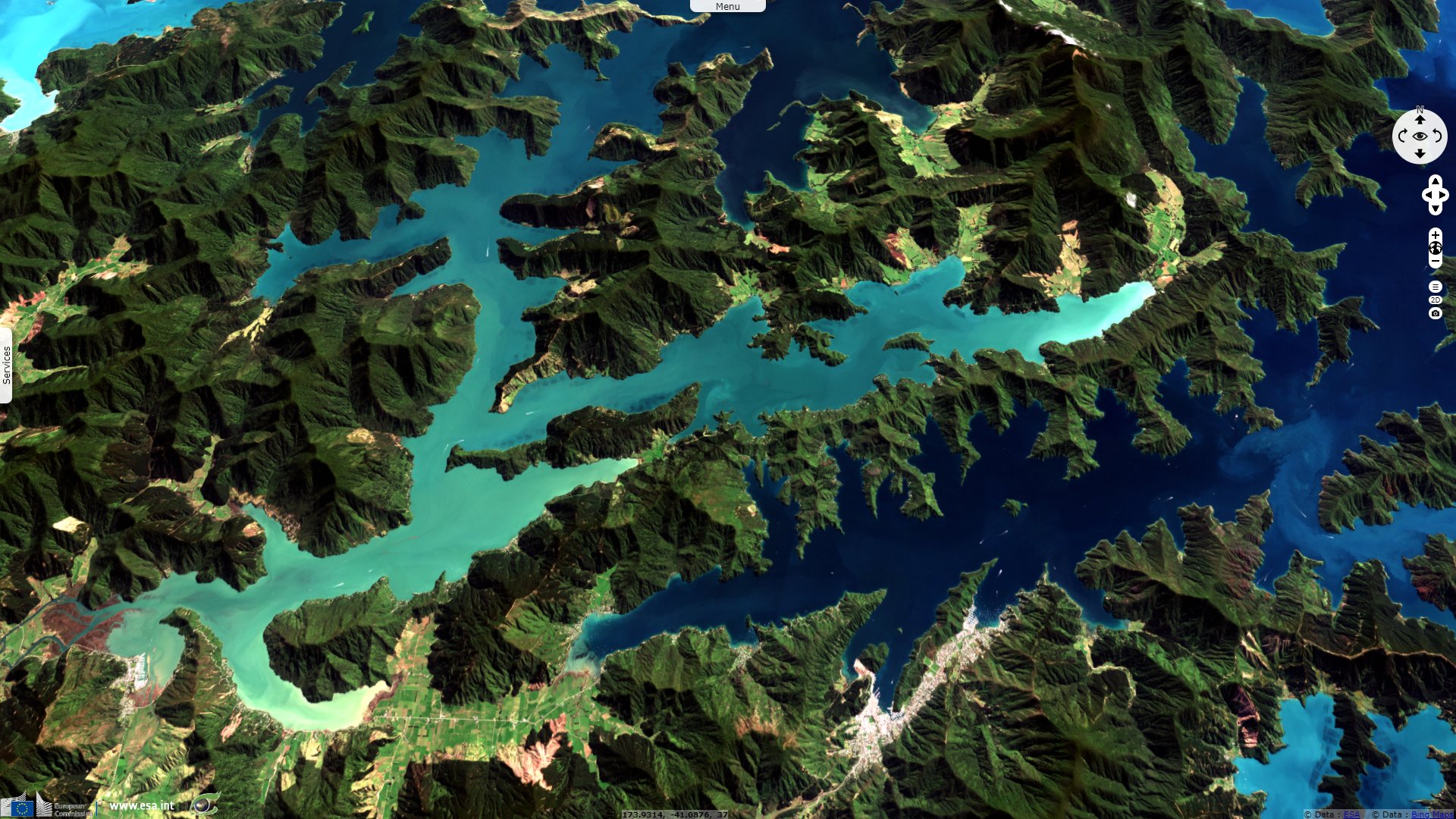 "Instead, marine inundation may have been primarily driven by eustatic sea-level changes which resulted in ephemeral submergence during interglacial periods when sea levels were highest. The present coastline in the Marlborough Sounds formed c. 7 ka ago, and similar highstand sea-level configurations probably occurred about every 100 ka throughout the Late Quaternary."
Fig. 6 - S2 (07.07.2021) - The sediment-filled inlets inward contrast with the darker waters around and the cyan outward valleys, rich in phytoplankton.
3D view 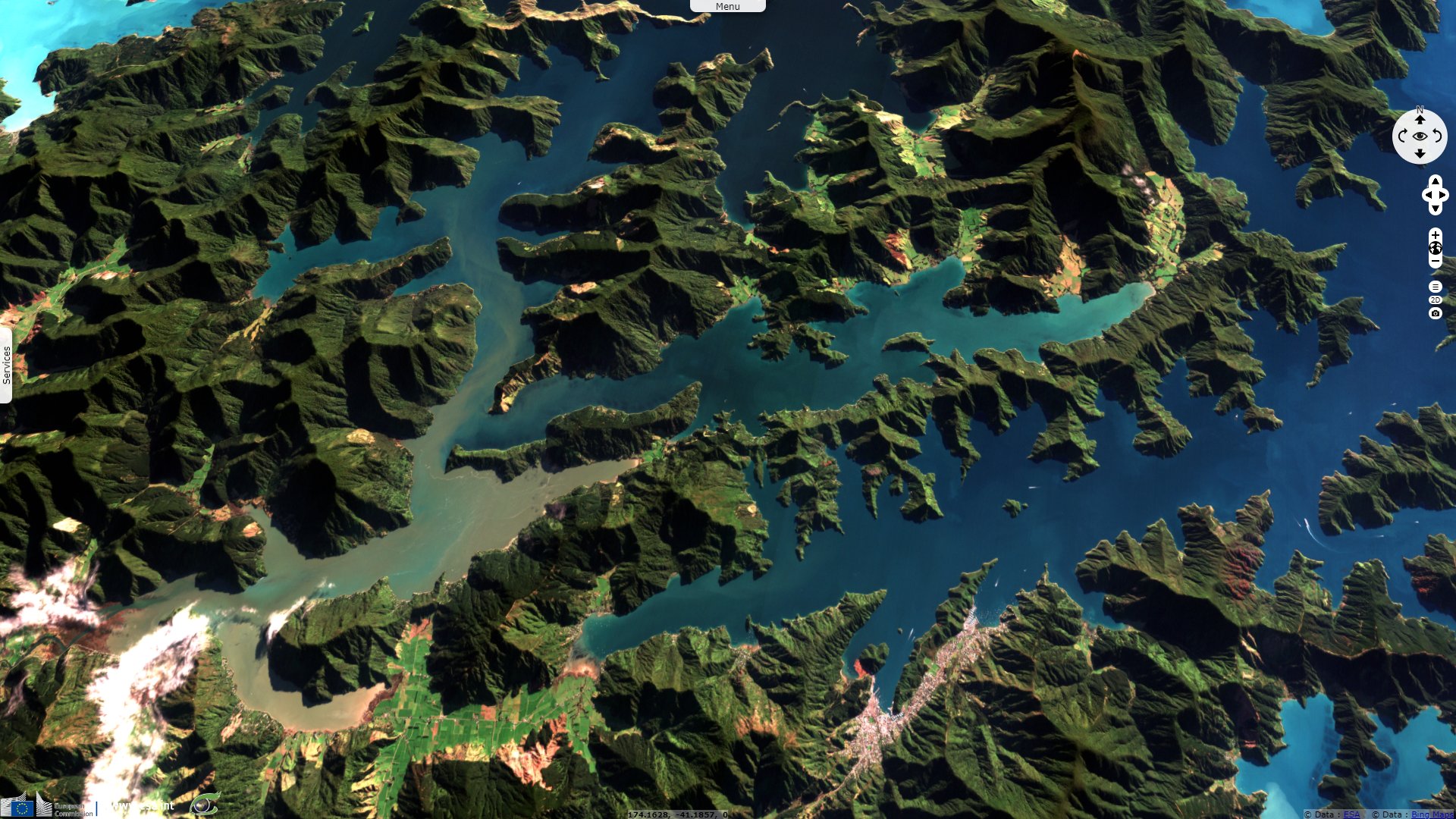 "Marlborough Sounds topography and palaeotopography preserved beneath the Wanganui Basin are inferred to be part of the same valley and ridge system. The largest palaeovalleys and ridges generally trend north-northeast and are the northern continuations of the main drowned valleys and emergent ridges in the Sounds. Three primary palaeovalleys can, for example, be traced 70–90 km northwards from the Sounds. These palaeovalleys, which were previously identified and referred to as submarine canyons by Winslow (1968)."
Fig. 7 - S2 (17.02.2021) - Swirls develop along the rugged coast on the outer margin of the Marlborough Sounds.
2D view 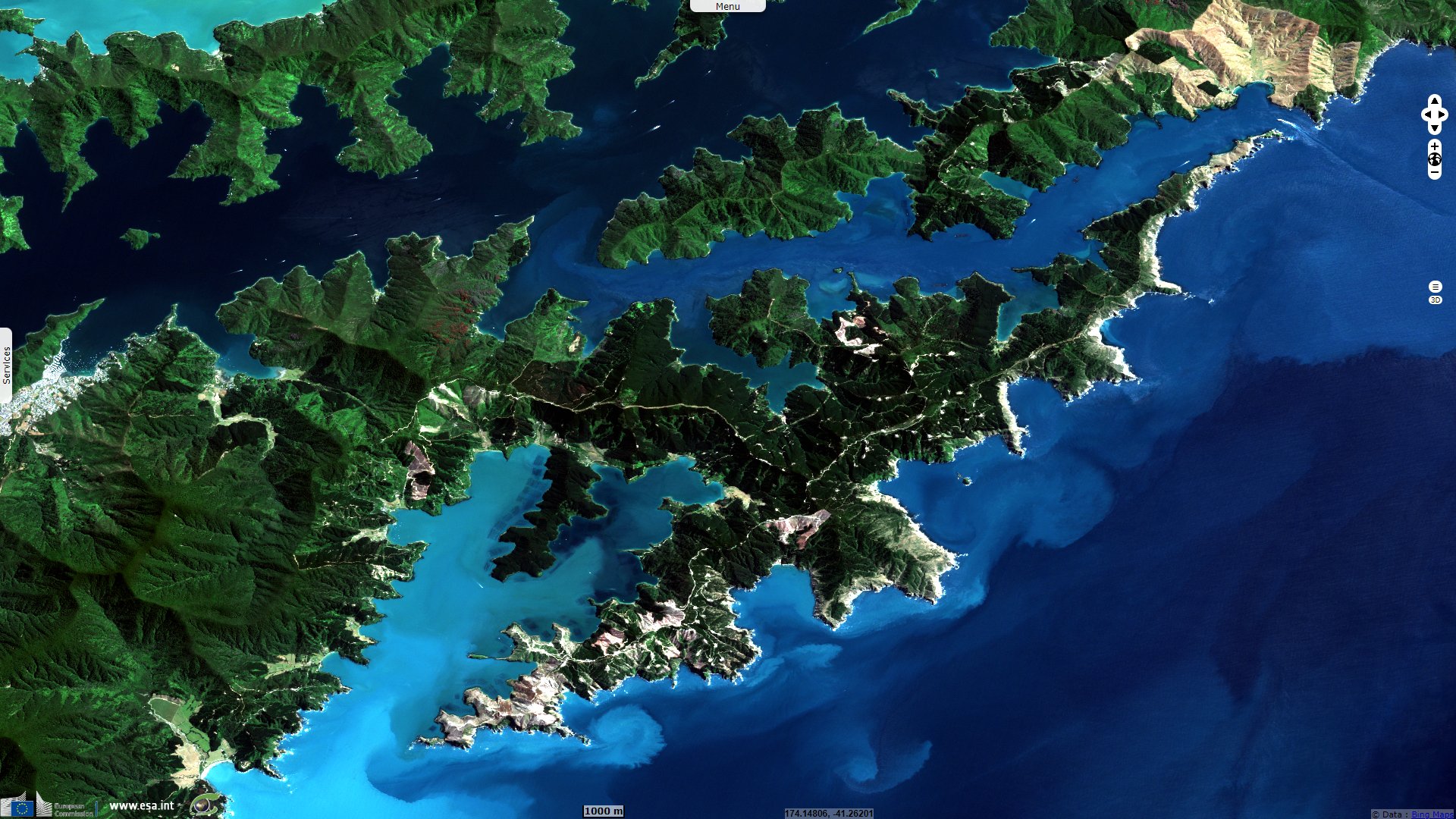 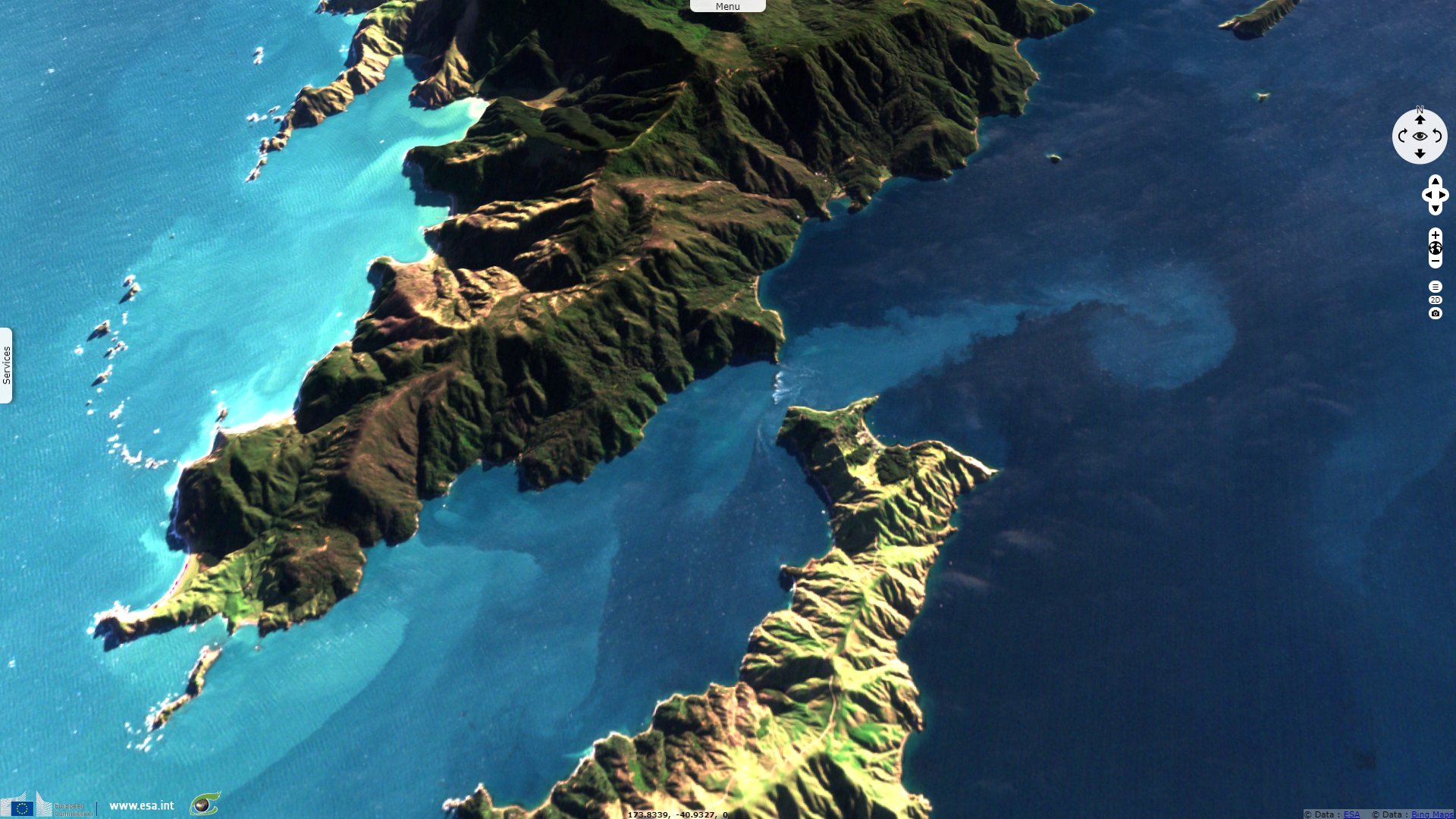