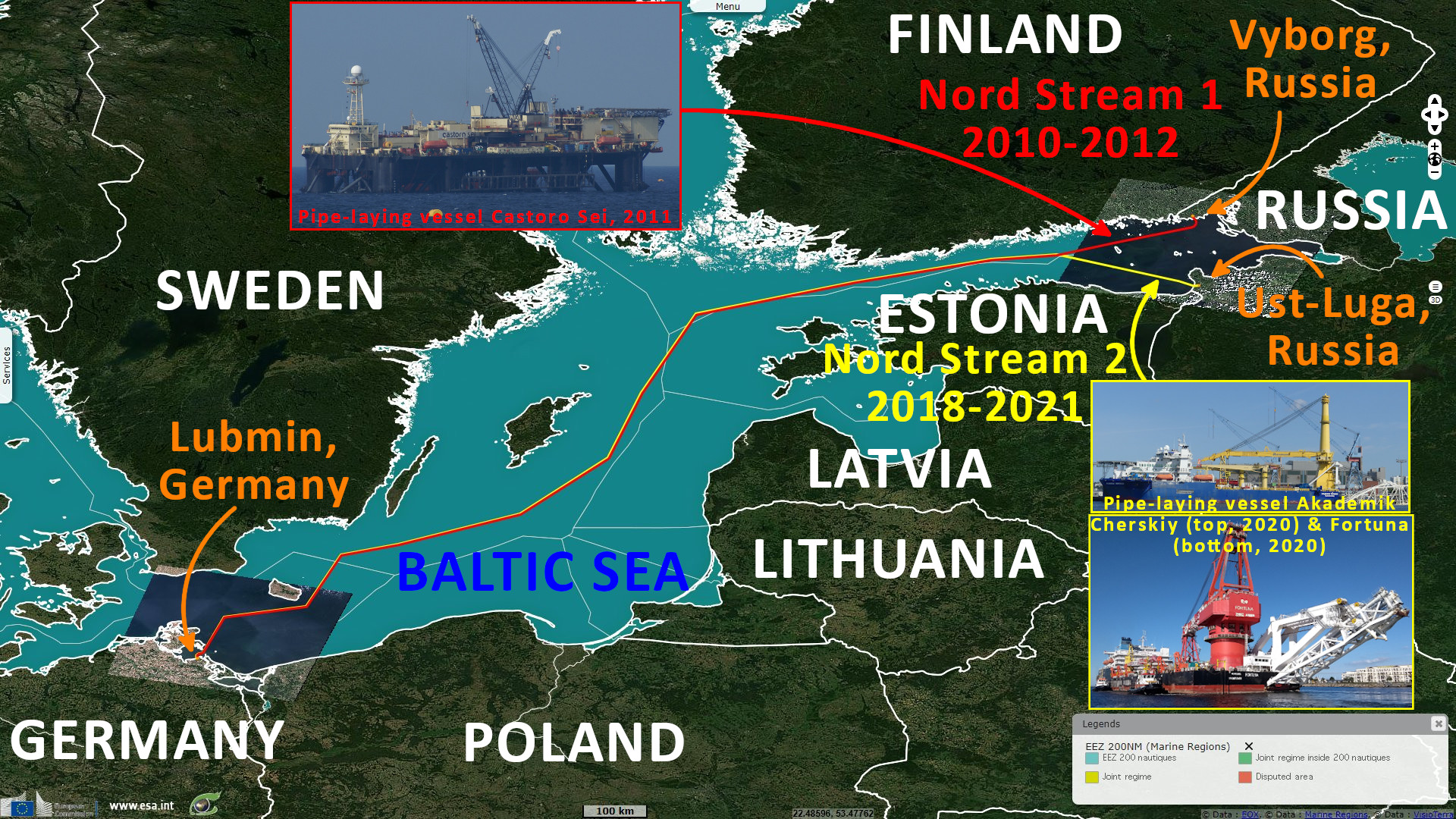 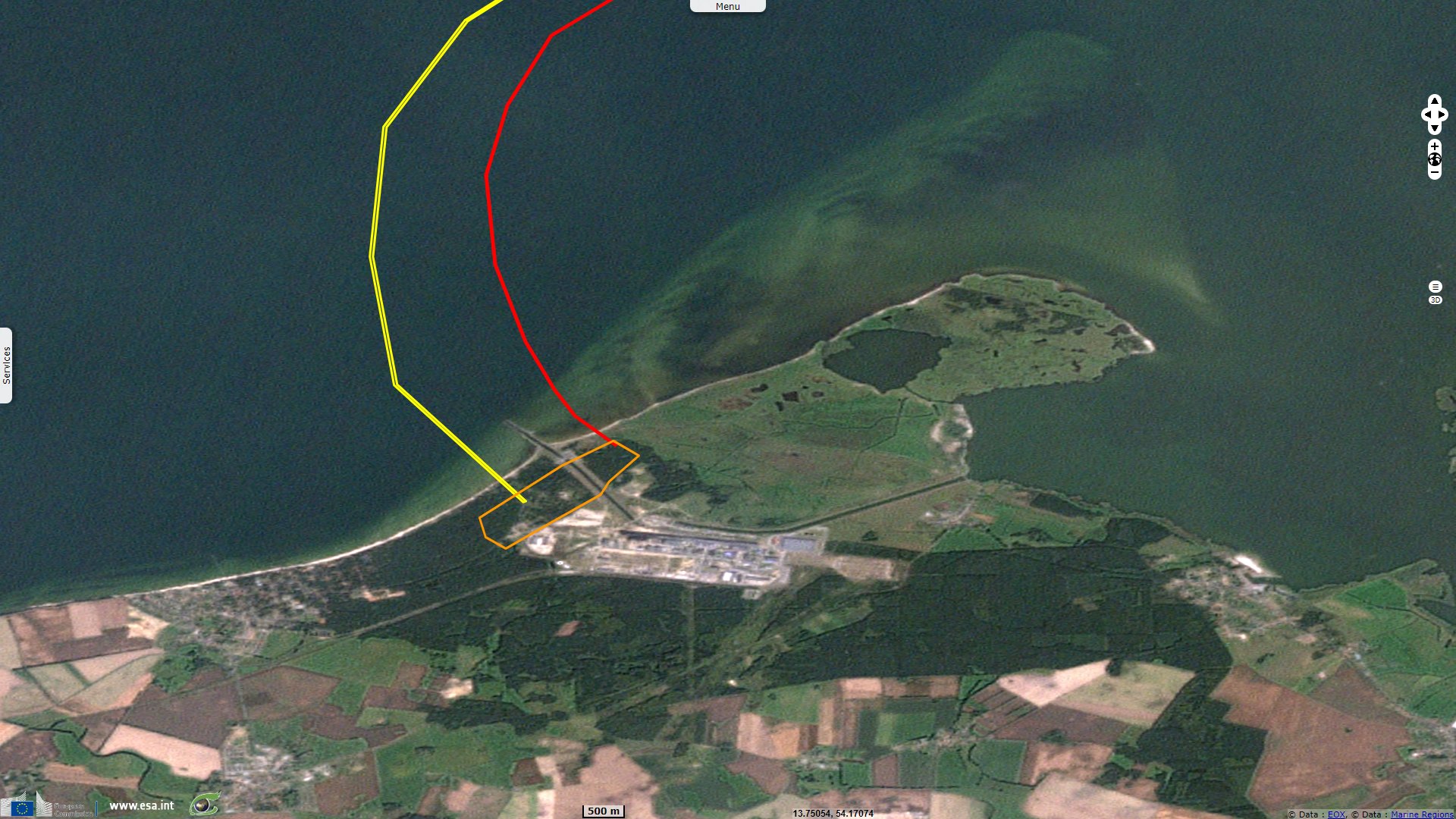 The official website dedicated to the project describes the first phase, Nord Stream 1 as follows: "The Nord Stream twin pipeline system through the Baltic Sea runs from Vyborg, Russia to Lubmin near Greifswald, Germany. The pipelines were built and are operated by Nord Stream AG." "The two 1224-kilometre offshore pipelines are the most direct connection between the vast gas reserves in Russia and energy markets in the European Union."
Fig. 3 - L5 (02.06.2011) - View during the completion of Nord Stream 1.
2D view

"Construction of Line 1 of the twin pipeline system began in April 2010, and was completed in June 2011. Transportation of gas through Line 1 began in mid November 2011. Construction of Line 2, which runs parallel to Line 1, began in May 2011 and it was completed in April 2012. Gas transport through the second line began in October 2012. Each line has a transport capacity of roughly 27.5 bcm [billion cubic meters] of natural gas per annum. "At 1222 km in length, Nord Stream 1 is the longest sub-sea pipeline in the world, surpassing the Norway-UK Langeled pipeline.
Fig. 4 - S2 (05.06.2022) - View after the completion of Nord Stream 2 infrastructures.
2D view 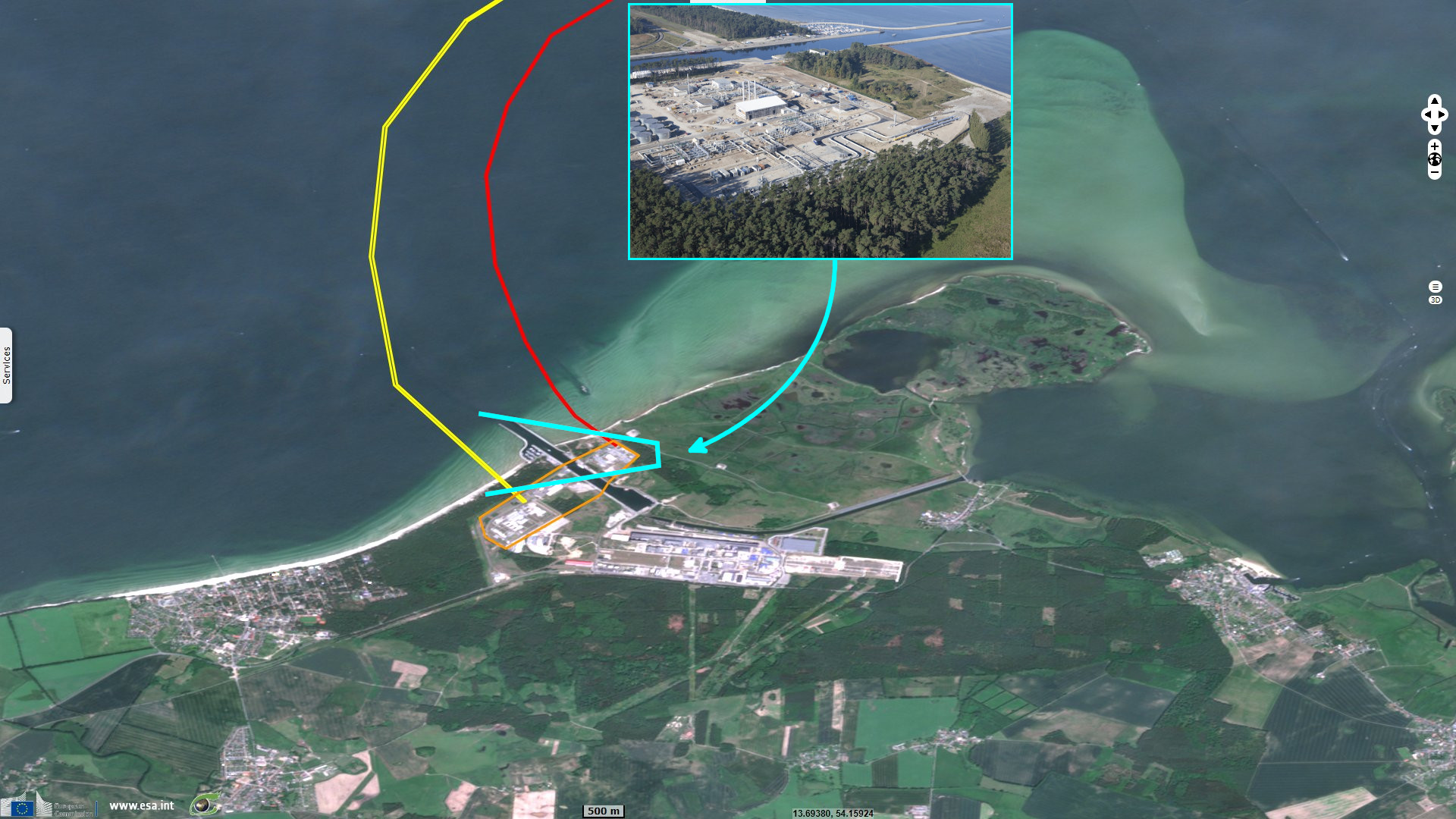 Deutsche Welle explains the development of the second phase of the project, Nord Stream 2: "Nord Stream 2 is a gas pipeline that would allow Germany to effectively double the amount of gas it imports from Russia. In 2017, Germany used up a record 53 billion cubic meters of Russian gas, comprising about 40 percent of Germany's total gas consumption. Nord Stream 2's delivery system is designed to carry up to 55 billion cubic meters of gas per year."
Fig. 5 - L5 (29.06.2001) - View of Vyborg, near the Finnish border, before the building of Nord Stream 1 started.
2D view 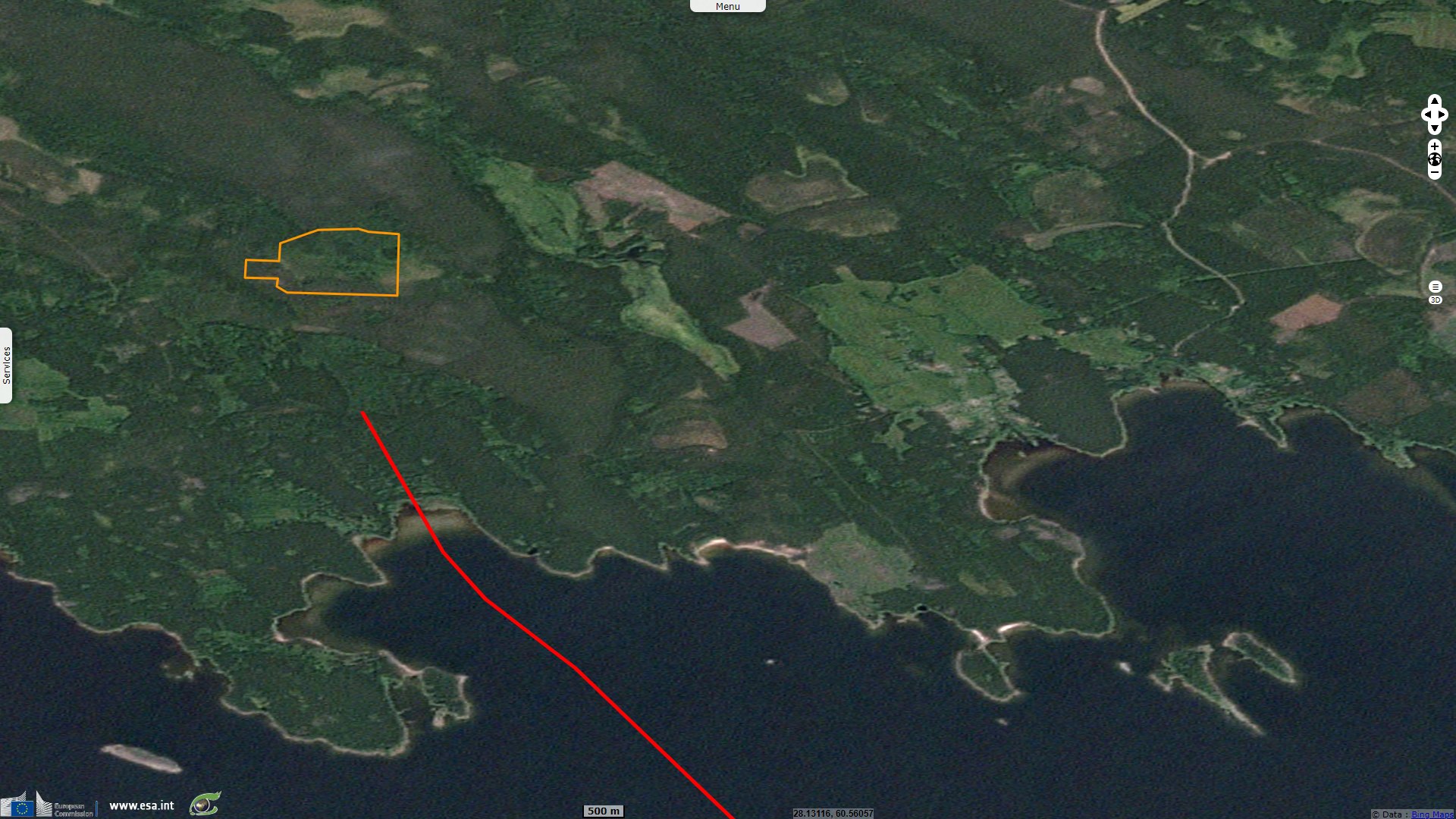 "Berlin and Moscow agreed on the 1200-kilometer route, which would connect the Ust-Luga area near Saint Petersburg with Greifswald in northeastern Germany. The pipes would run across the Baltic Sea, for the most part following the route of the pre-existing Nord Stream 1 pipeline, which became operational in 2011." "Russia's energy giant Gazprom is the sole shareholder of the Nord Stream 2 AG, the company in charge of implementing the €9.5 billion project. Gazprom is also covering half of the cost. The rest, however, is being financed by five western companies: ENGIE, OMV, Royal Dutch Shell, Uniper and Wintershall." The laying of Nord Stream 2 was carried out in 2018–2021. The first line of Nord Stream 2 was completed in June 2021, and the second line was completed in September 2021.
Fig. 6 - S2 (03.10.2015) - A first set of infrastructures have been implanted for Nord Stream 1.
2D view 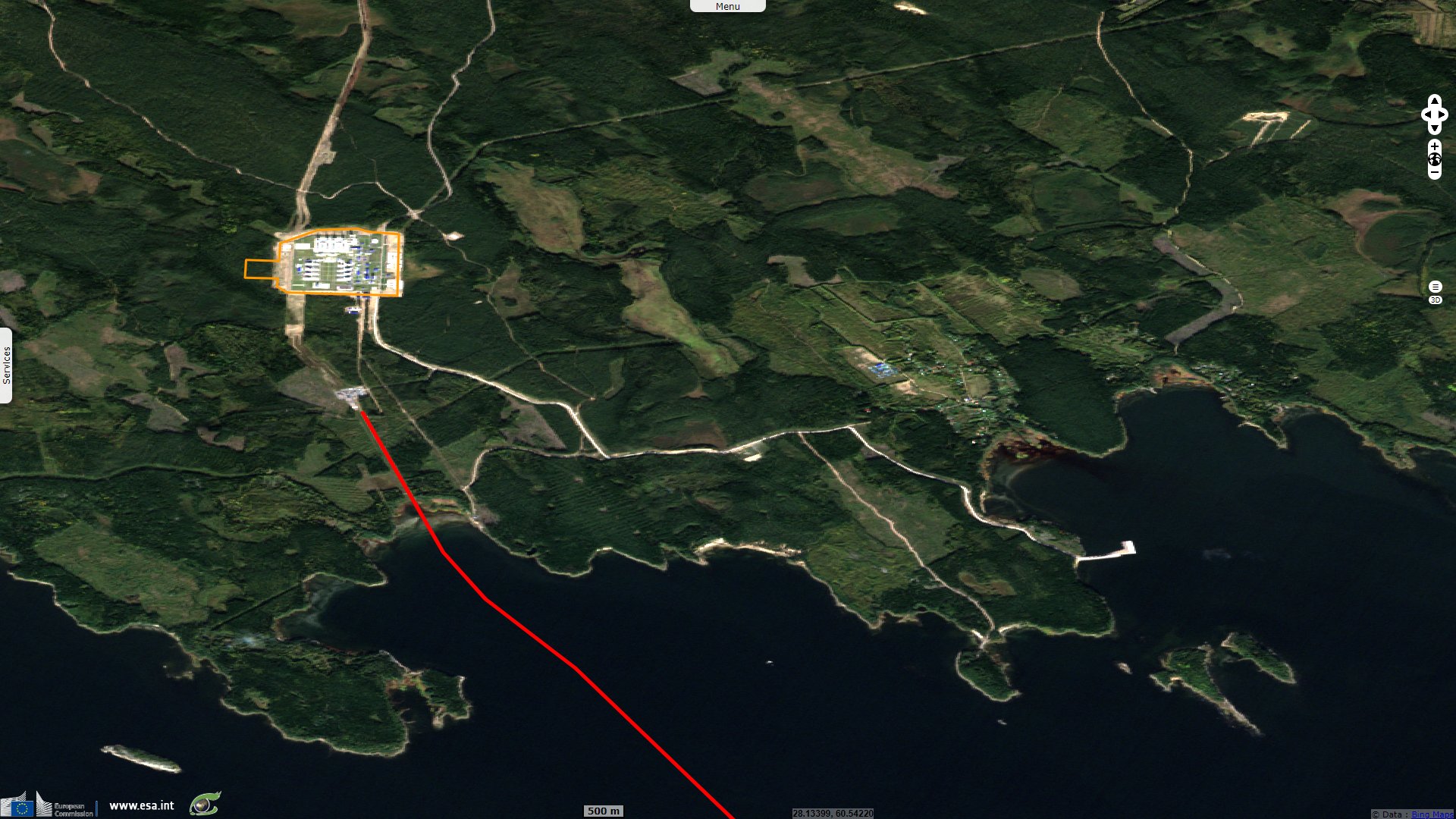 In addition to geostrategic issues, the Nord Stream 2 project has been criticized to its impact on greenhouse gas emissions. The greatest environmental impact in connection with the pipeline results from the consumption of the transported gas, if it allows more imports to the EU. That would conflict with decarbonization efforts for climate protection. At a nominal capacity of 55 billion m3/year, each pipe pair can cause carbon emissions of 110 million tonnes CO2 annually.
Fig. 7 - S2 (21.05.2022) - Additional plants have been built since.
2D view 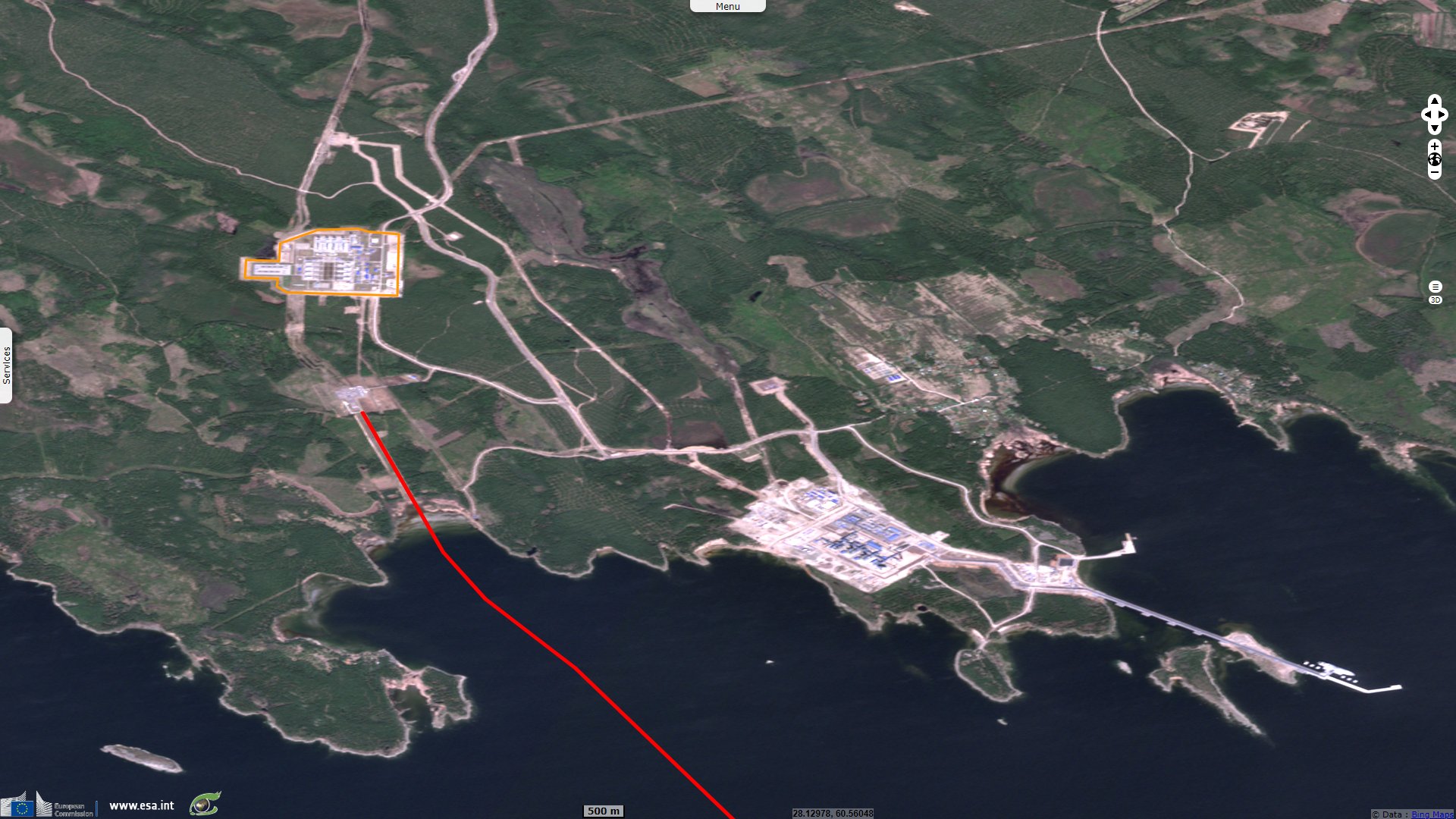 Reuters explains the latest developments of the project: "The 1230 km Nord Stream 2 pipeline from Russia to Germany had not begun commercial operations as it awaited German certification. That approval process was put on hold as a result of the escalating Ukraine crisis. Since Russia's invasion of Ukraine on February, several large companies have said they will exit their Russian operations including energy firm Shell, which said it will no longer be involved in Nord Stream 2, among other investments. Swiss-based Russian gas pipeline operator Nord Stream 2 AG has not filed for insolvency, it said on Wednesday. 'The company only informed the local authorities that the company had to terminate contracts with employees following the imposition of U.S. sanctions on the company,' Nord Stream 2 AG said in emailed comments."
Fig. 8 - L5 (12.06.1986) - Ust-Luga, near the border with Estonia, before the start of the Nord Stream project.
3D view 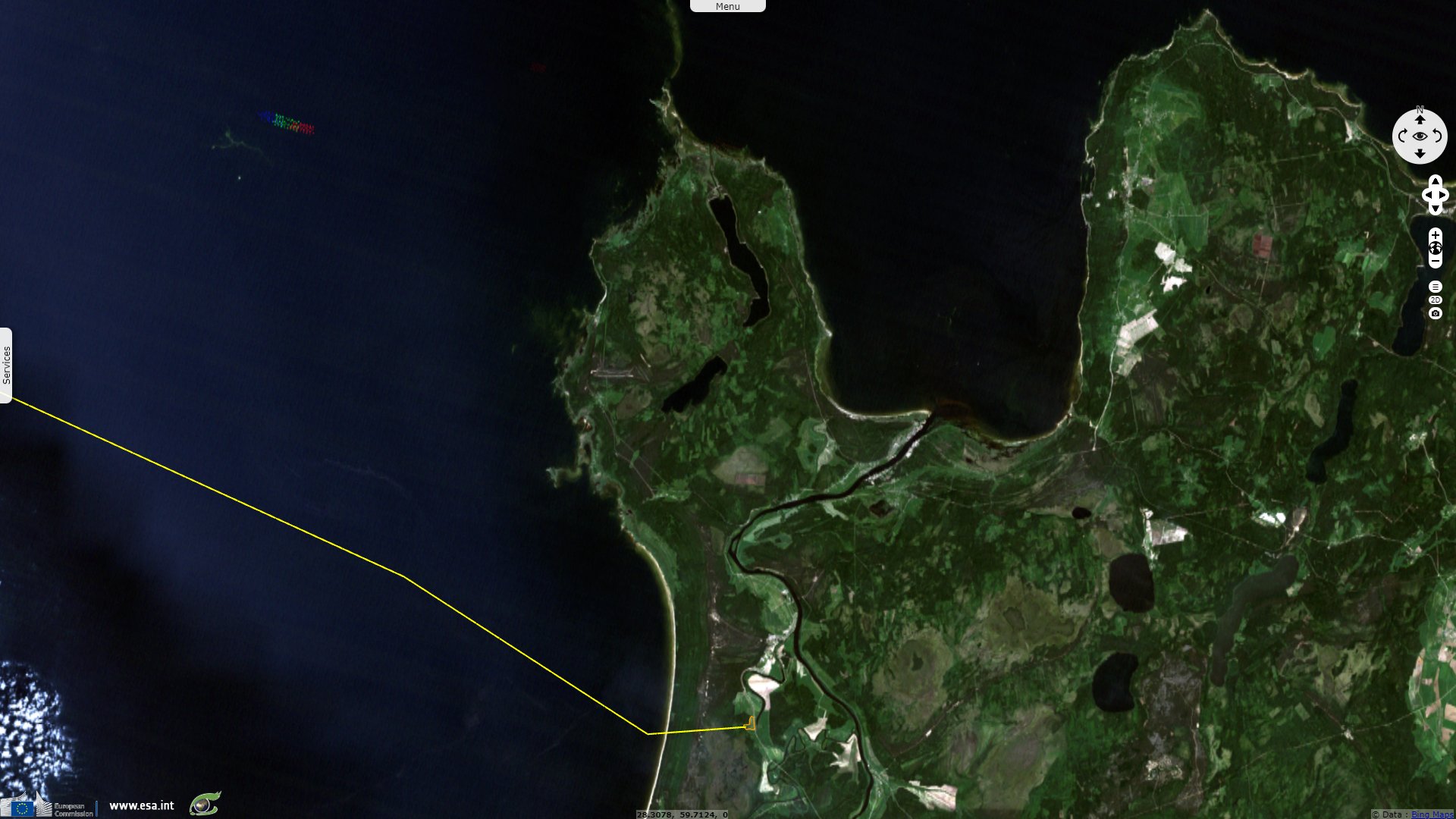 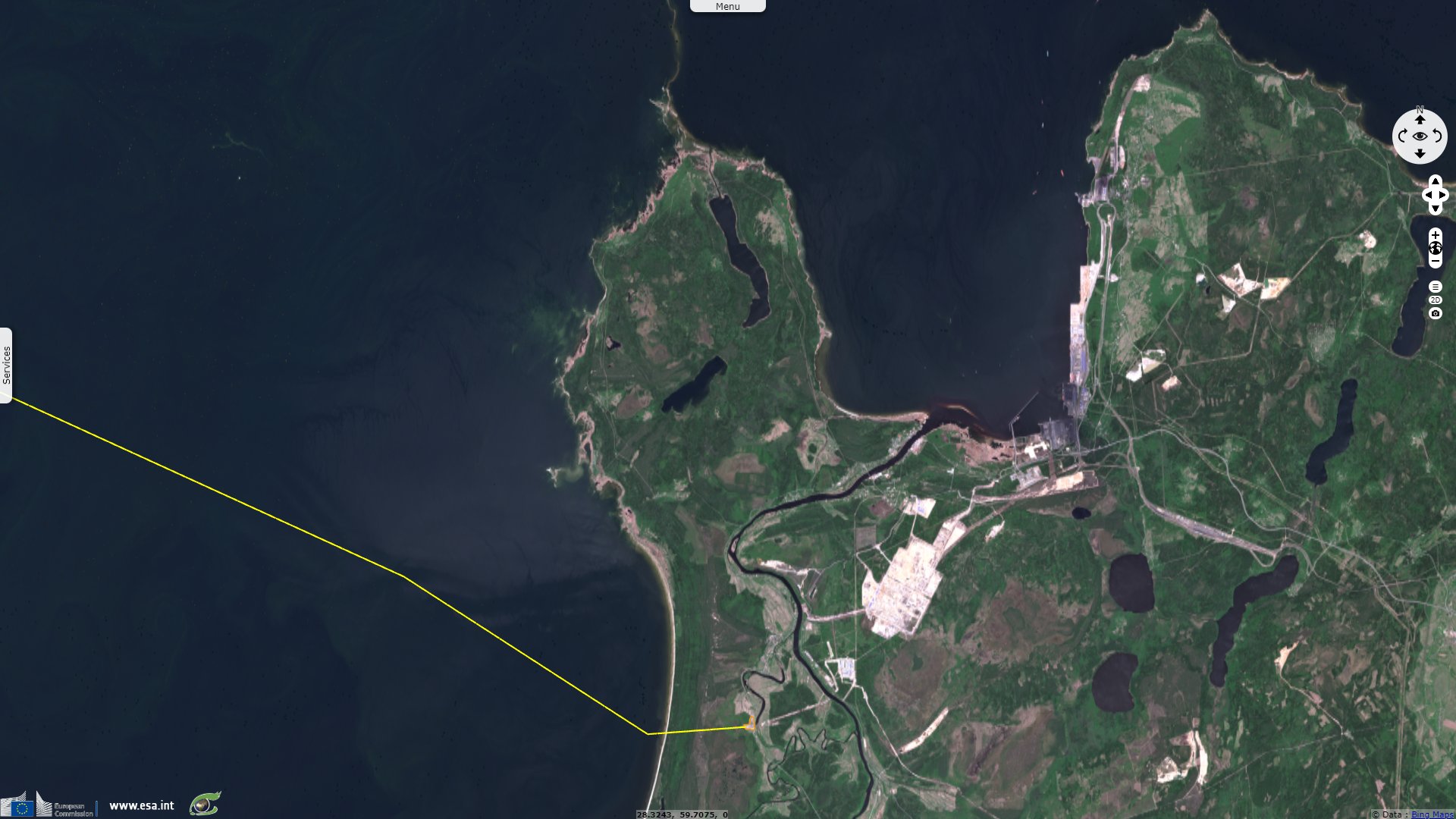