Fig. 1 - The iberic LNG terminals are widespread along both the Atlantic and Mediterranean coast.
2D view 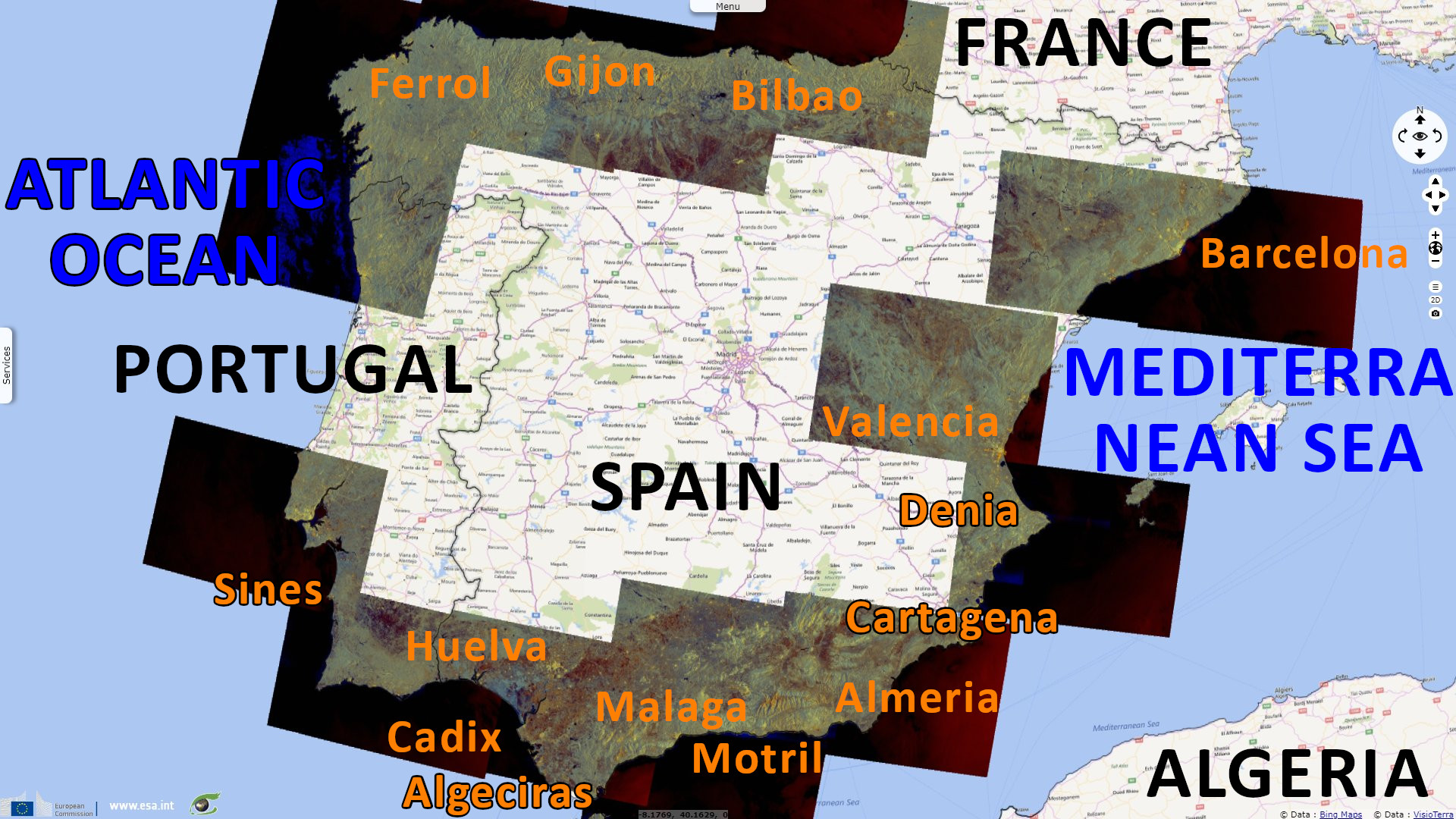 After the choice was made by some countries to use methane as a transition energy from coal to decarbonized energy, Russia importance as a major source of cheap gas for northern and eastern Europe at the cost of increased dependency. Due to topography and lack of connection to the rest of the European energy grid, Spain and Portugal were forced to find alternatives, carbon-intensive for some of its gas sources, as it is explained in this article written on 01 September 2022 by Patricia Cohen and published in the New York Times.
Fig. 2 - S1 (19.08.2022->12.09.2022) - Bilbao port is located north of Spain, near the Pyrenees.
2D view 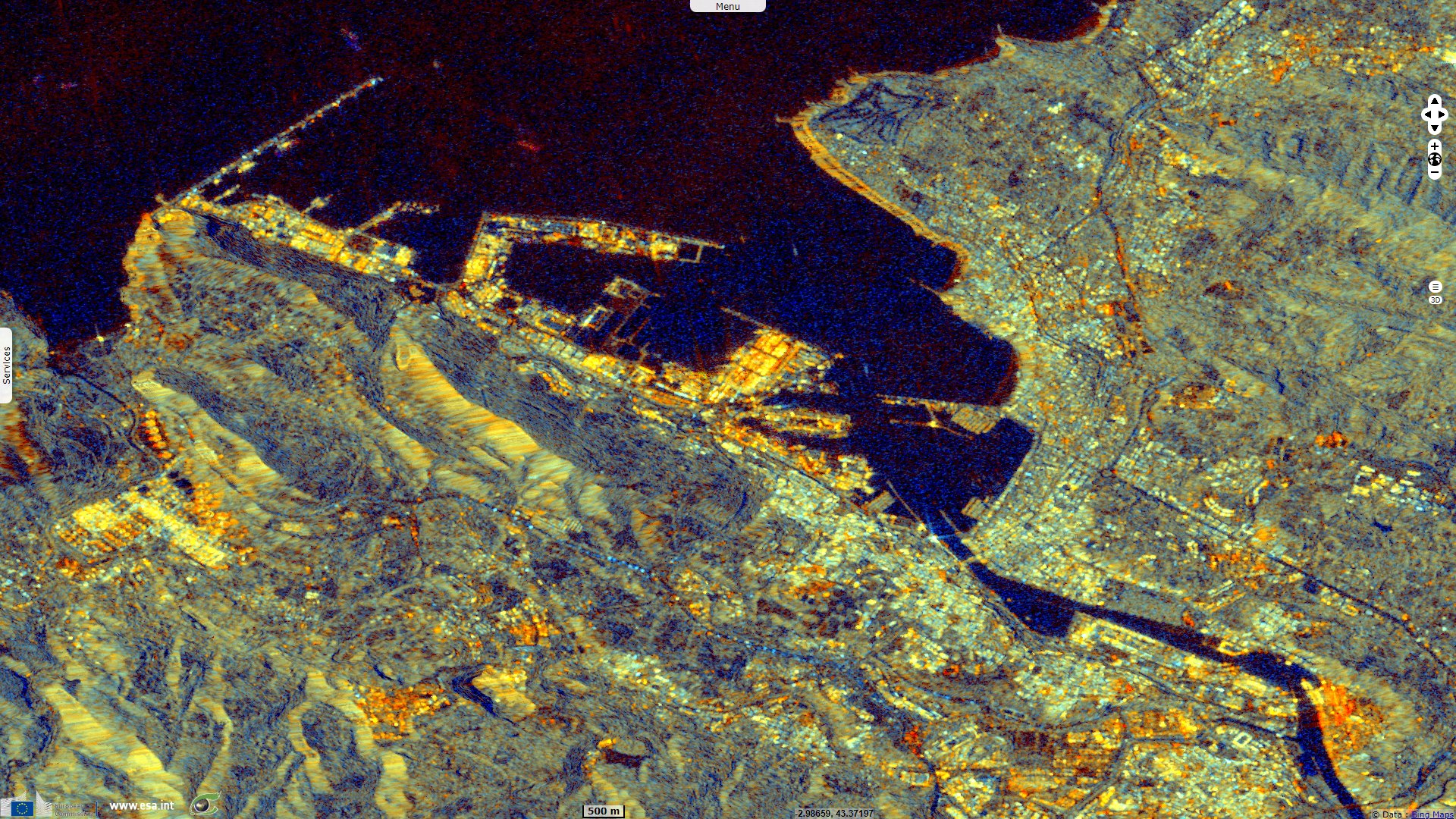 "For years, the Iberian Peninsula was cut off from the web of pipelines and huge supply of cheap Russian gas that power much of Europe. And so Portugal and Spain were compelled to invest heavily in renewable sources of energy like wind, solar and hydropower, and to establish an elaborate system for importing gas from North and West Africa, the United States, and elsewhere."
Fig. 3 - S1 (23.08.2022->16.09.2022) - Gijon is located further west, on the north coast.
2D view 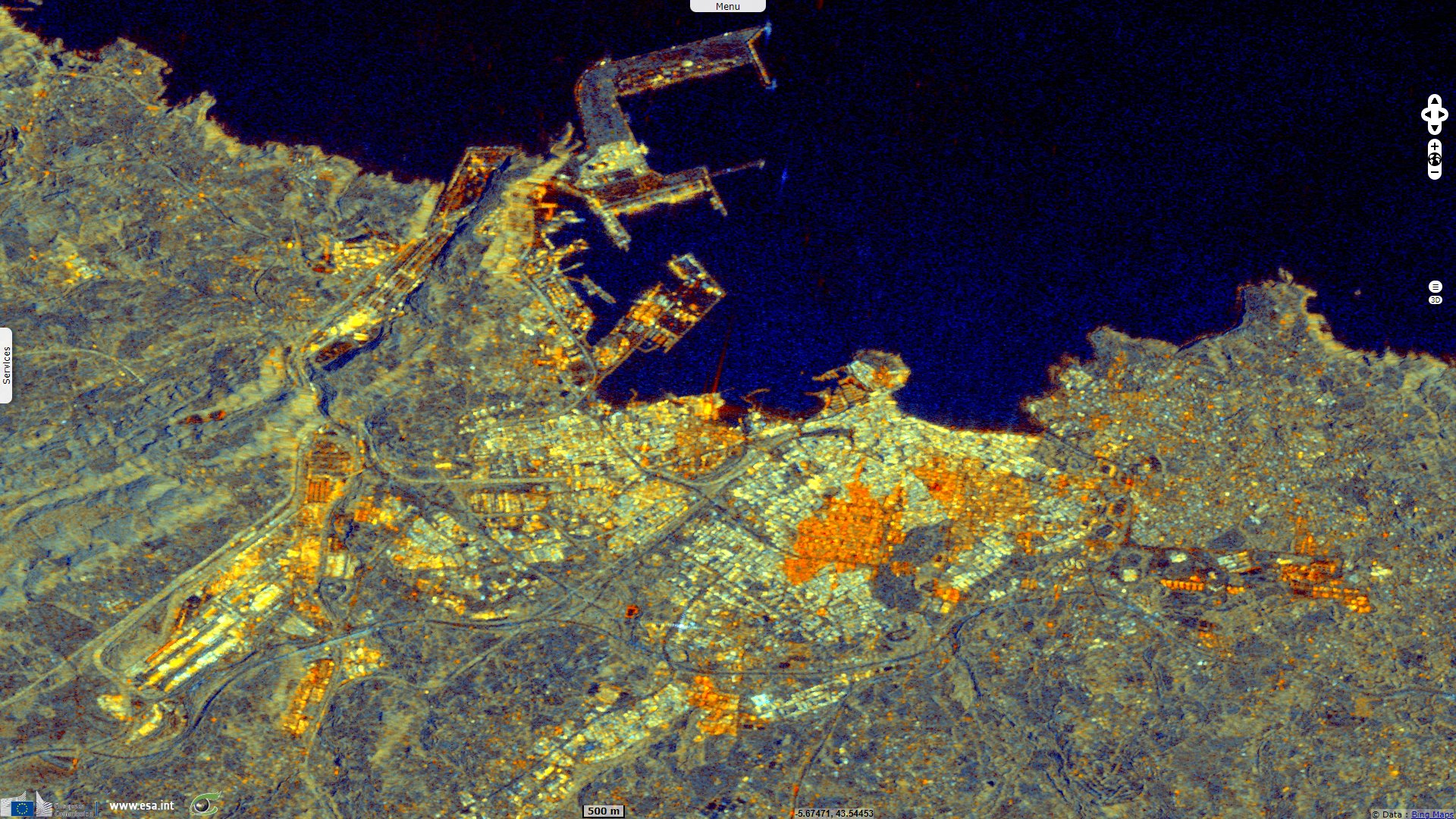 "Portugal and Spain were among the first European nations to build the kind of processing terminals needed to accept boatloads of natural gas in liquefied form and to convert it back into the vapor that could be piped into homes and businesses."
Fig. 4 - S2 (08.07.2022) - At north-west, the port of Ferrol is nested within a bay.
2D view 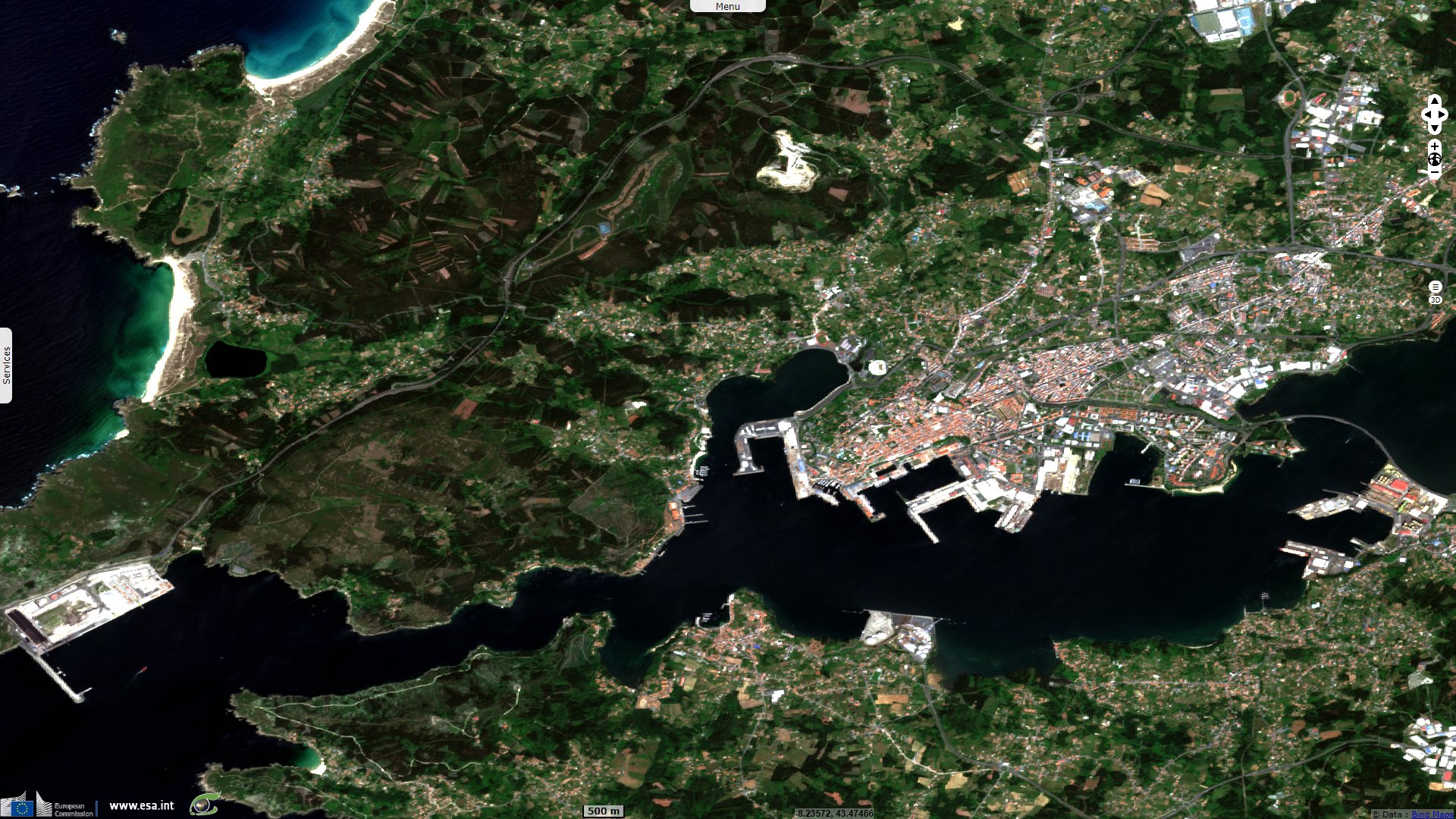 "This imported liquefied natural gas, or L.N.G., was more expensive than the type much of Europe piped in from Russia. But now that Germany, Italy, Finland and other European nations are frantically seeking to replace Russian gas with substitutes shipped by sea from the United States, North Africa and the Middle East, this disadvantage is an advantage."
Fig. 5 - S1 (04.08.2022->28.08.2022) - In south-west Portugal, Sines is the only LNG terminal of the country but with very large capacities.
2D view 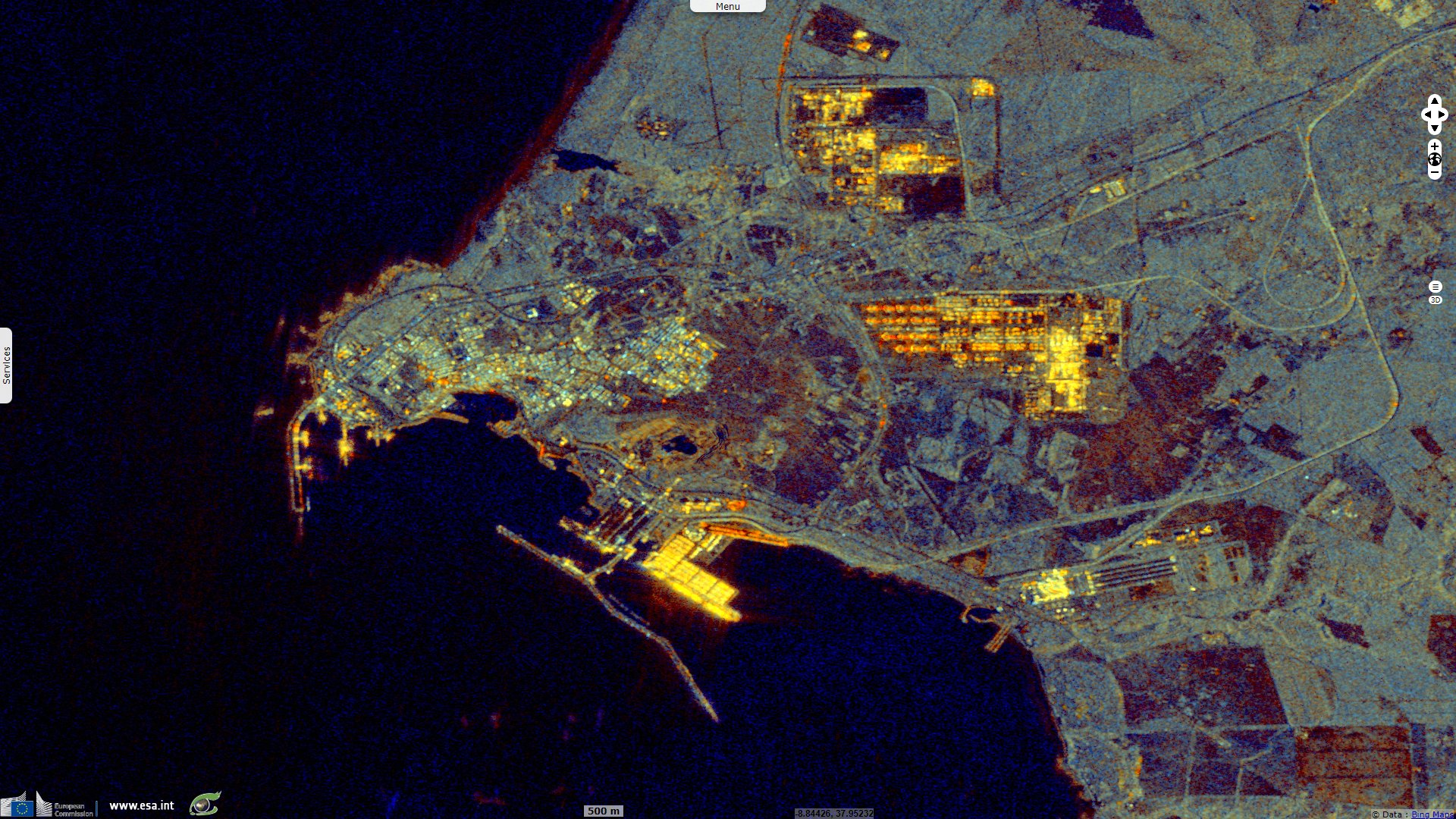 "Together, Spain and Portugal account for one-third of Europe’s capacity to process L.N.G. Spain has the most terminals and the biggest, though Portugal has the most strategically located."
Fig. 6 - S1 (19.08.2022) - The port of Huelva lies on the south-west coast of Spain, near the border with Portugal.
2D view 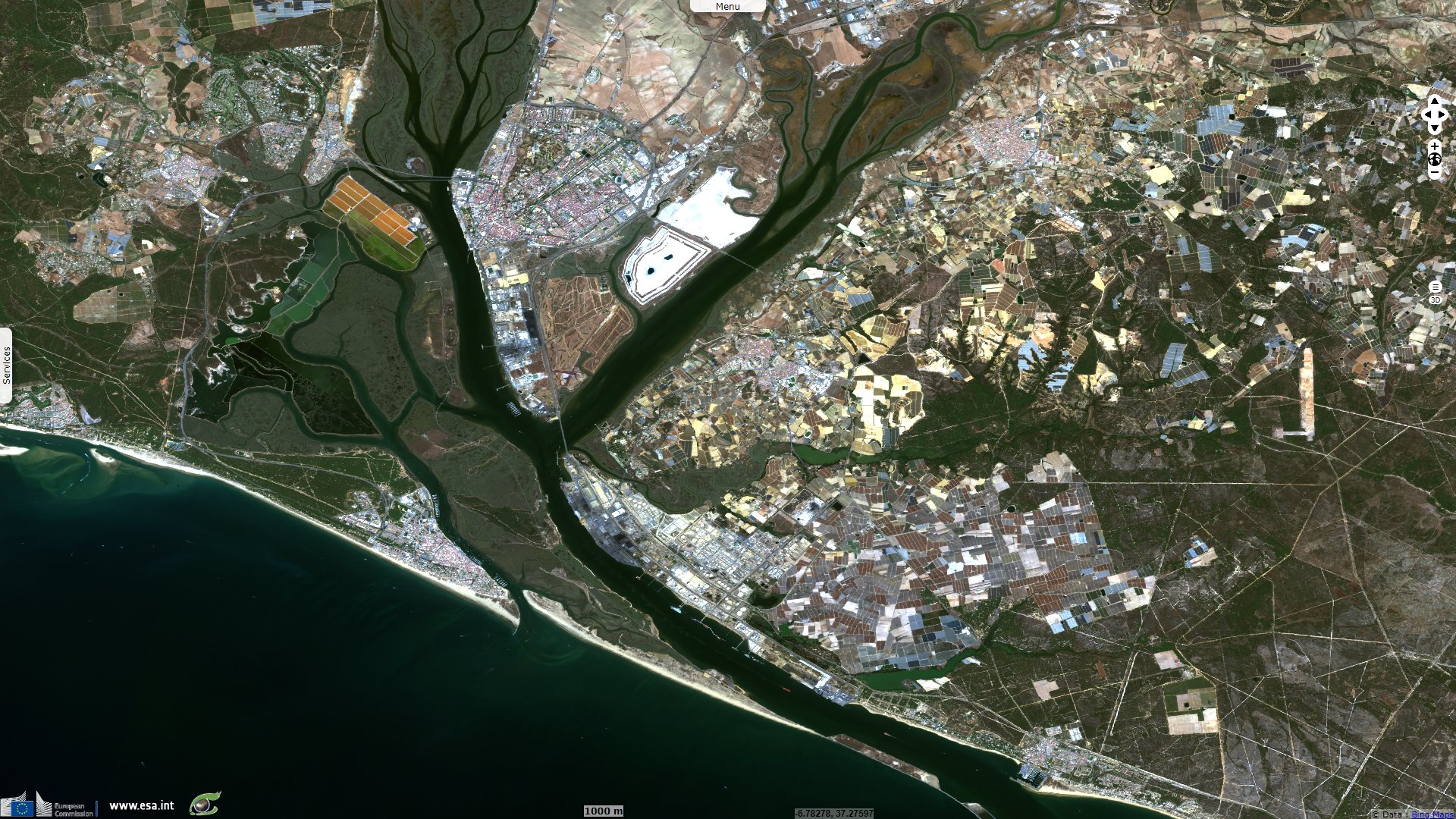 "Its terminal in Sines is the closest of any in Europe to the United States and the Panama Canal; it was the first port in Europe to receive L.N.G. from the United States, in 2016. Even before the war in Ukraine, Washington identified it as a strategically important gateway for energy imports to the rest of Europe."
Fig. 7 - S1 (23.08.2022->16.09.2022) - The port of Cadix is the last LNG terminal before the Mediterranean Sea.
2D view 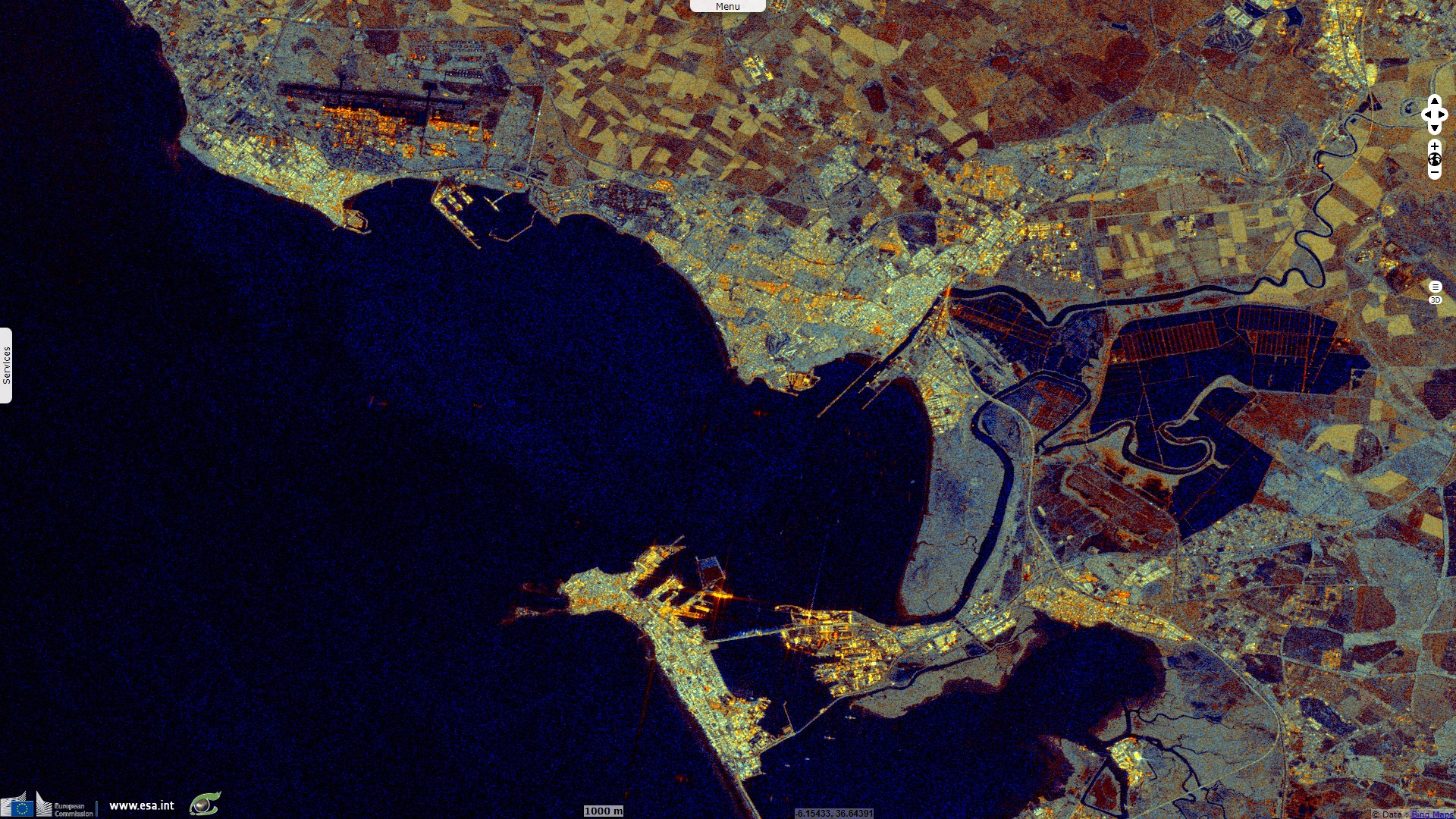 "Spain also has an extensive network of pipelines that carry natural gas from Algeria and Nigeria, as well as large storage facilities."
Fig. 8 - S2 (08.09.2022) - Algeciras is located west of Gibraltar, in a bay just north of the Moroccan tip.
2D view 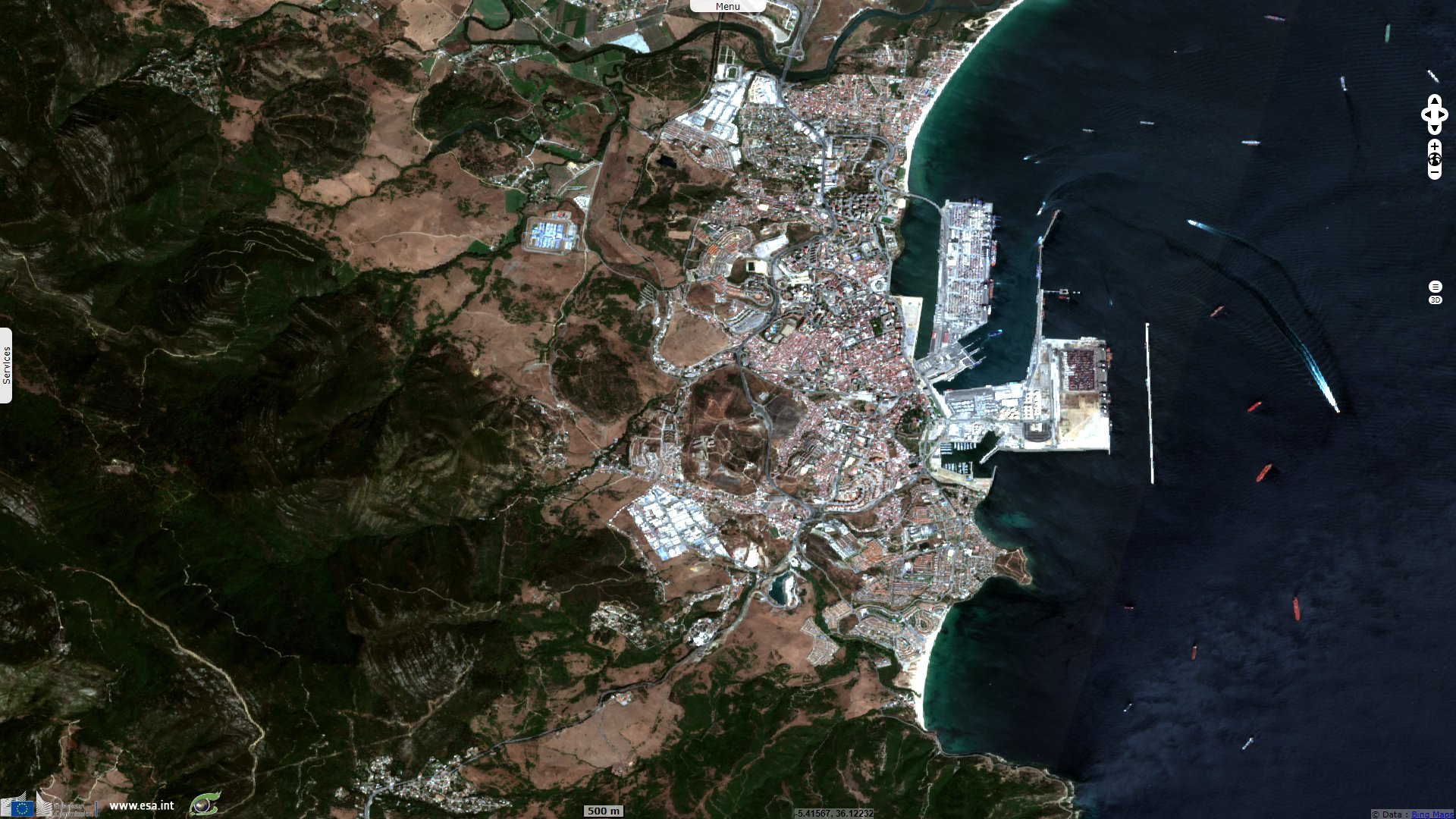 "Portugal and Spain’s ability to generate cheap electricity from wind, sun and water is putting pressure on Europe’s energy markets in other ways. They have argued that the European Union needs to reconfigure a system that currently bases the price of electricity on the price of gas. The power market was designed to encourage the development of renewable energy at a time when gas was cheap. But skyrocketing gas prices have caused electricity prices to explode."
Fig. 9 - S2 (17.07.2022) - Malaga is the first Spanish LNG terminal on the south coast of the Mediterranean.
2D view 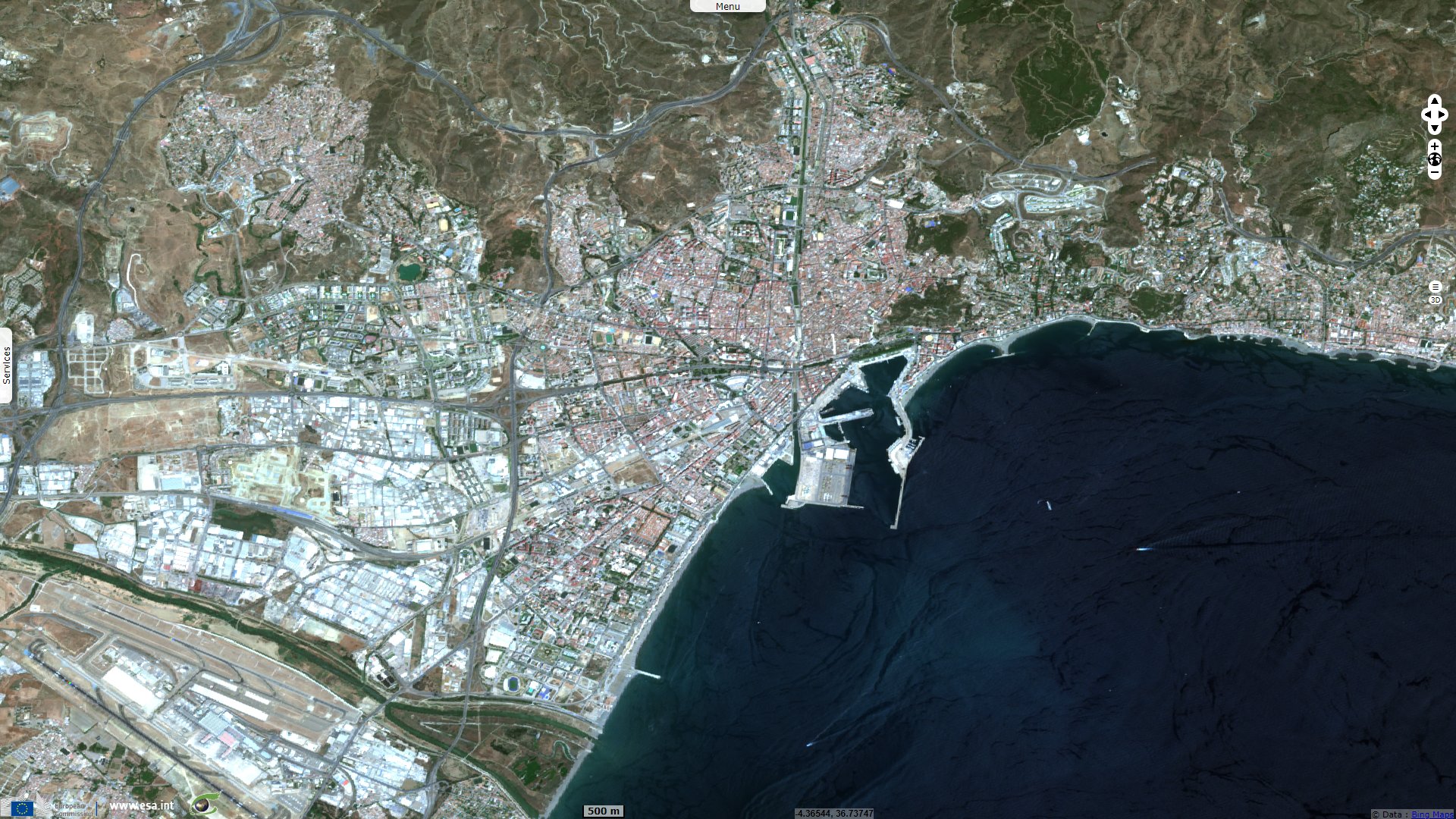 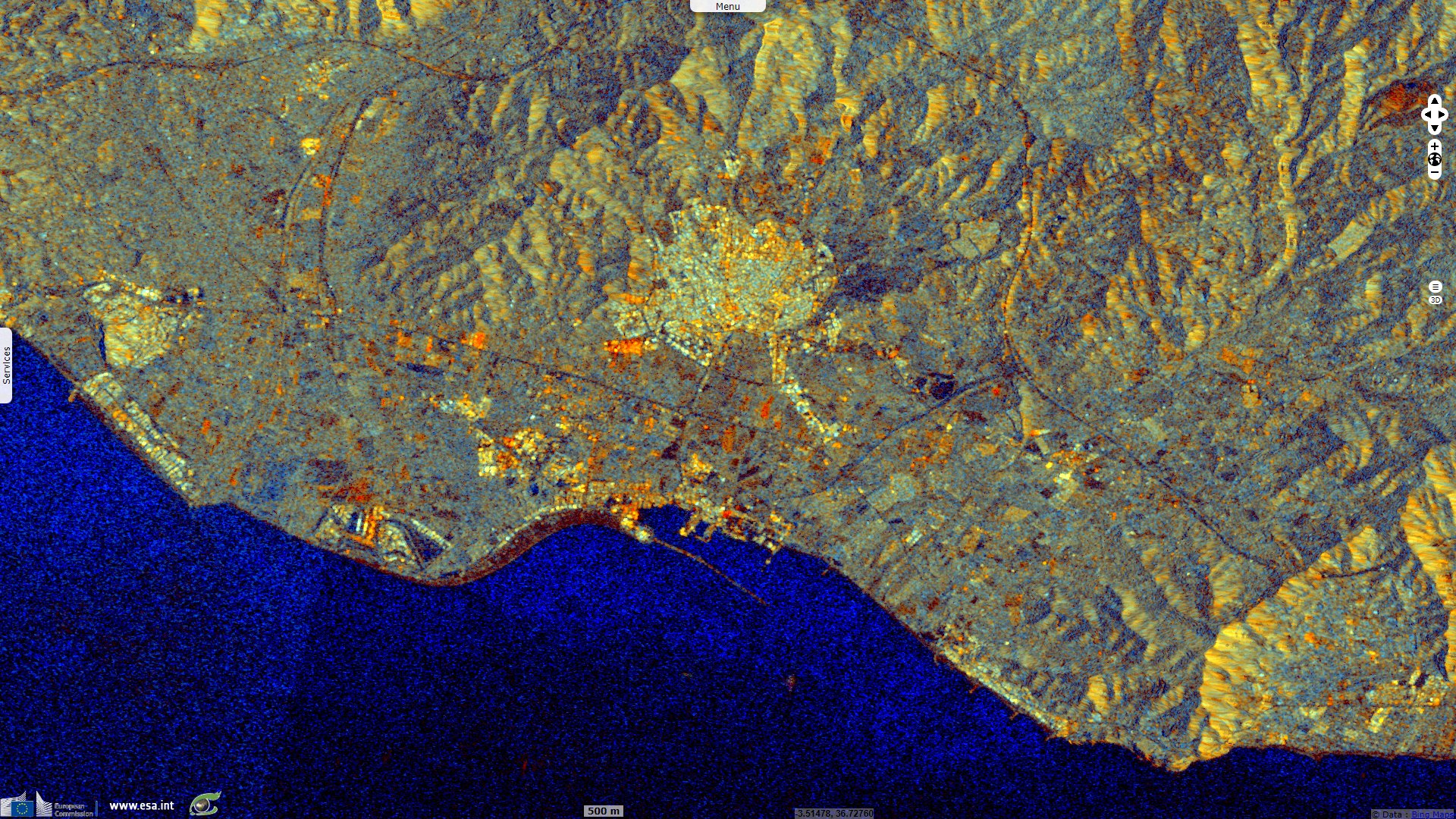 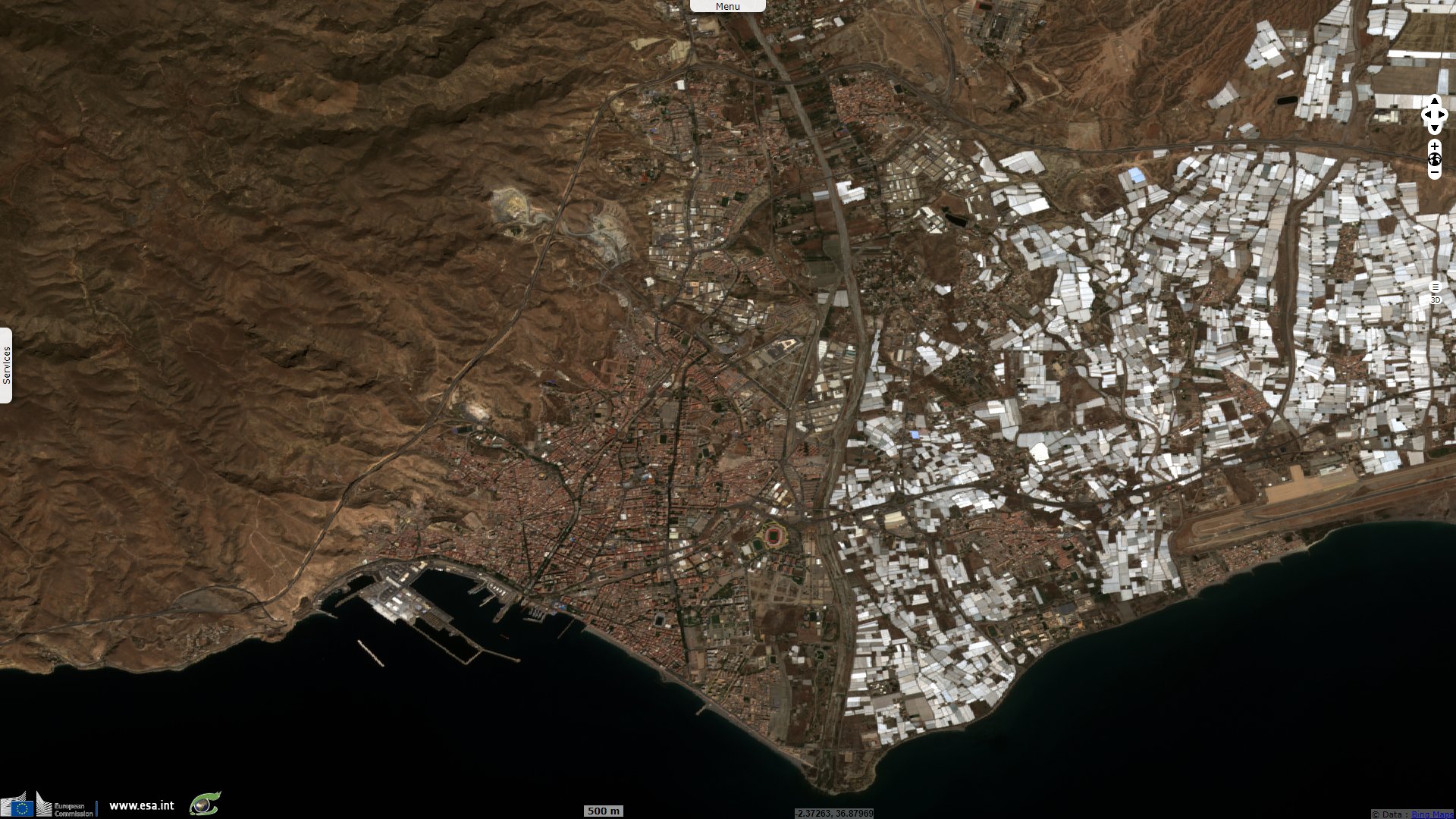 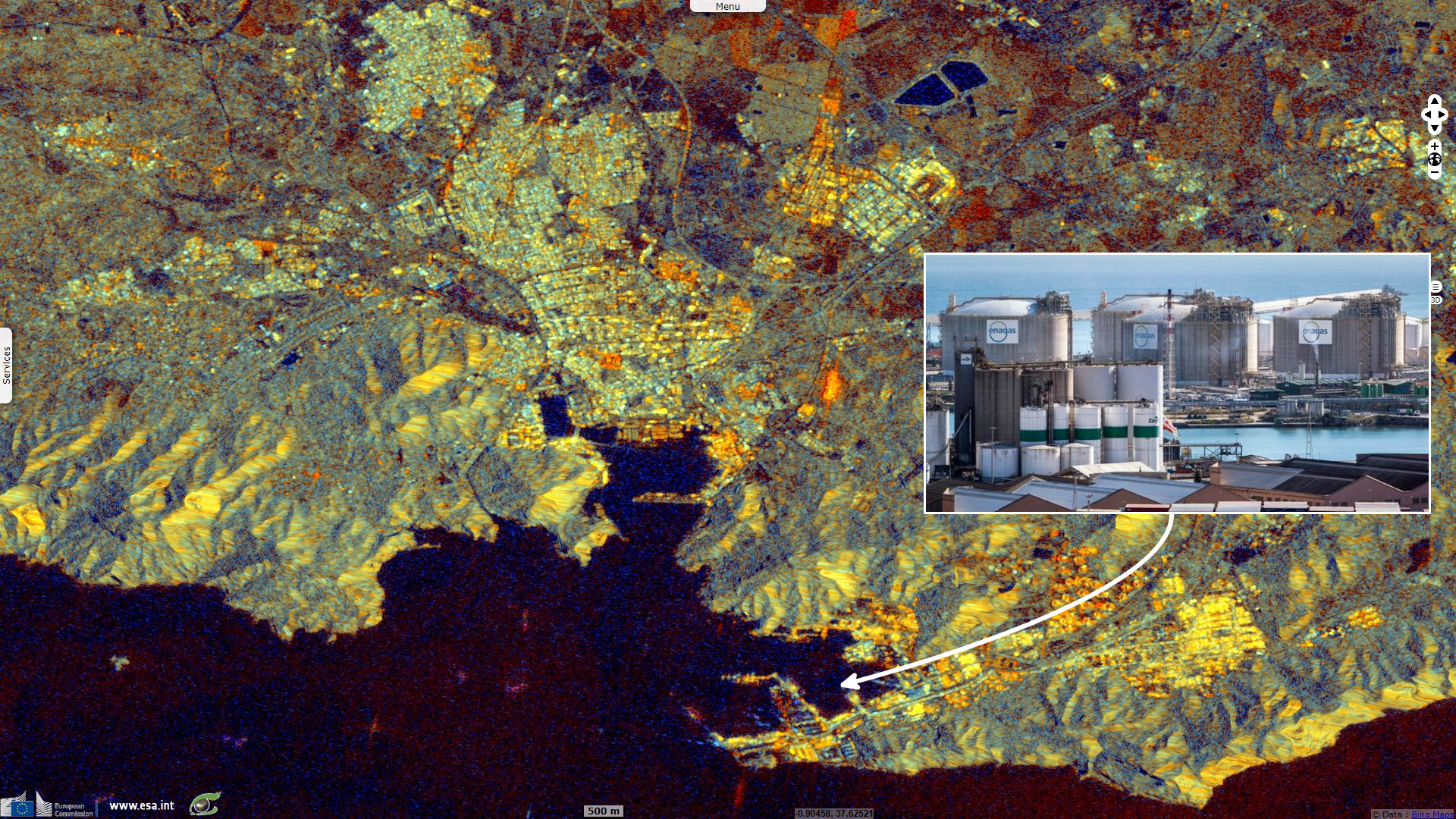 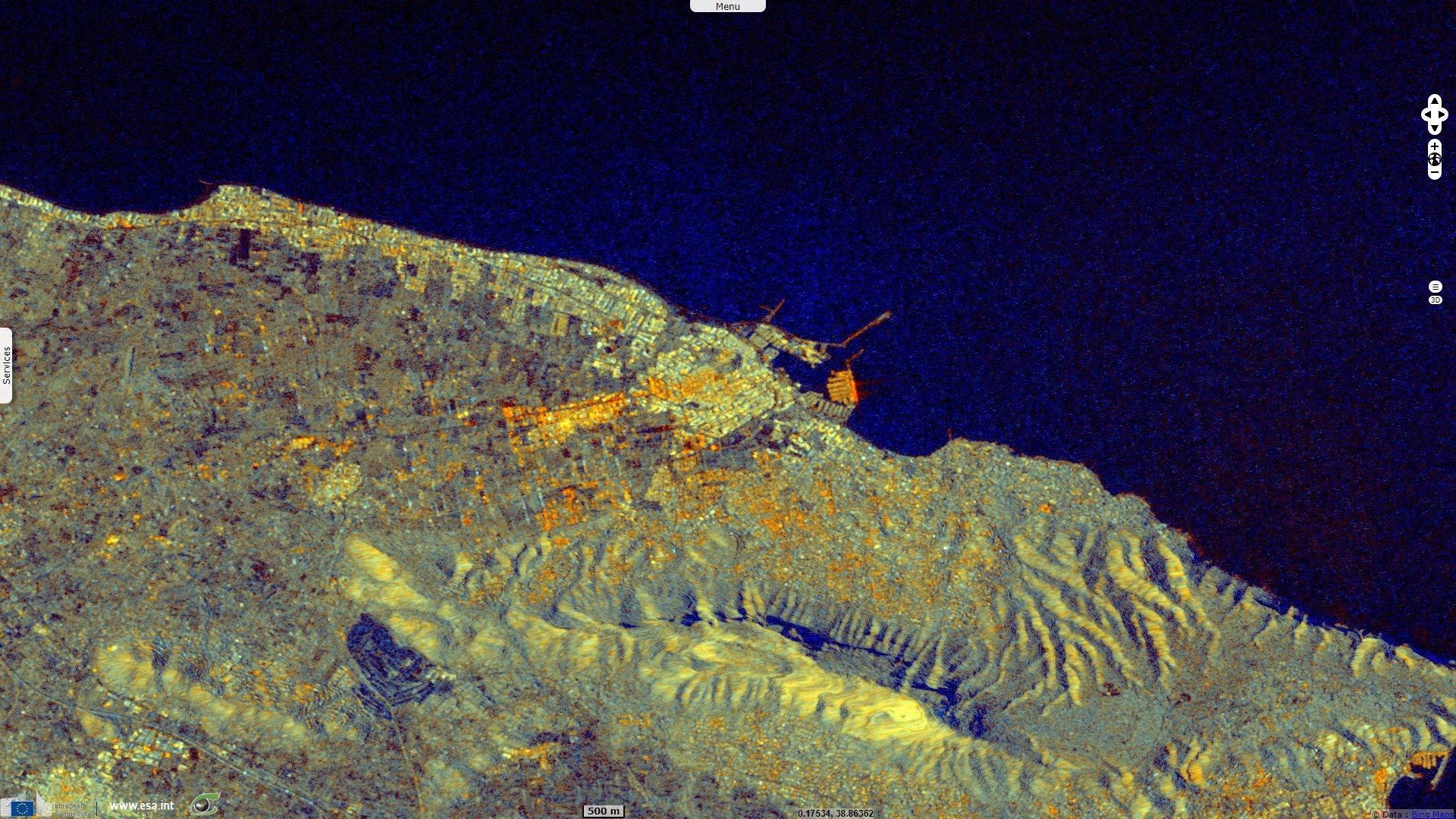 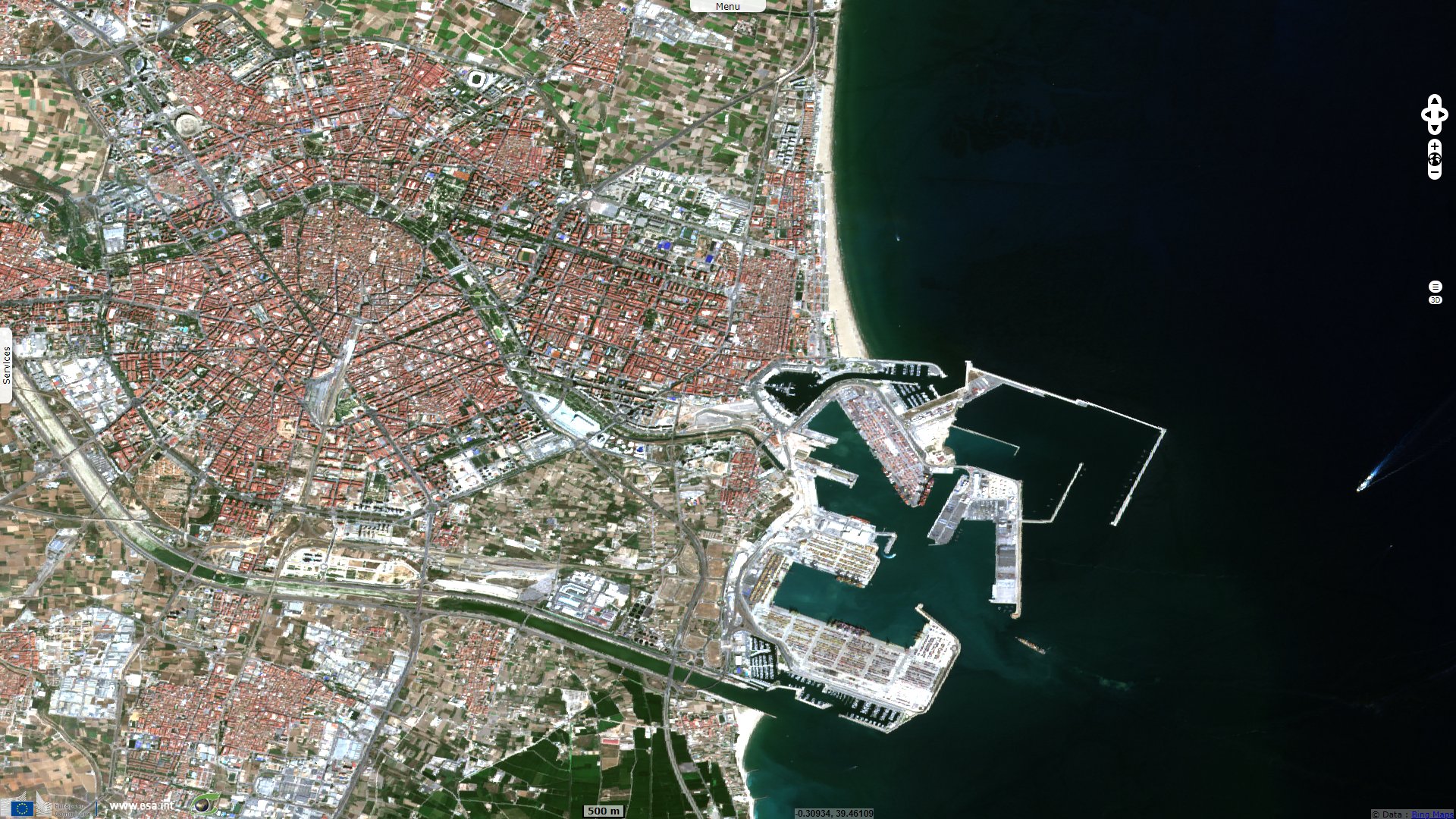 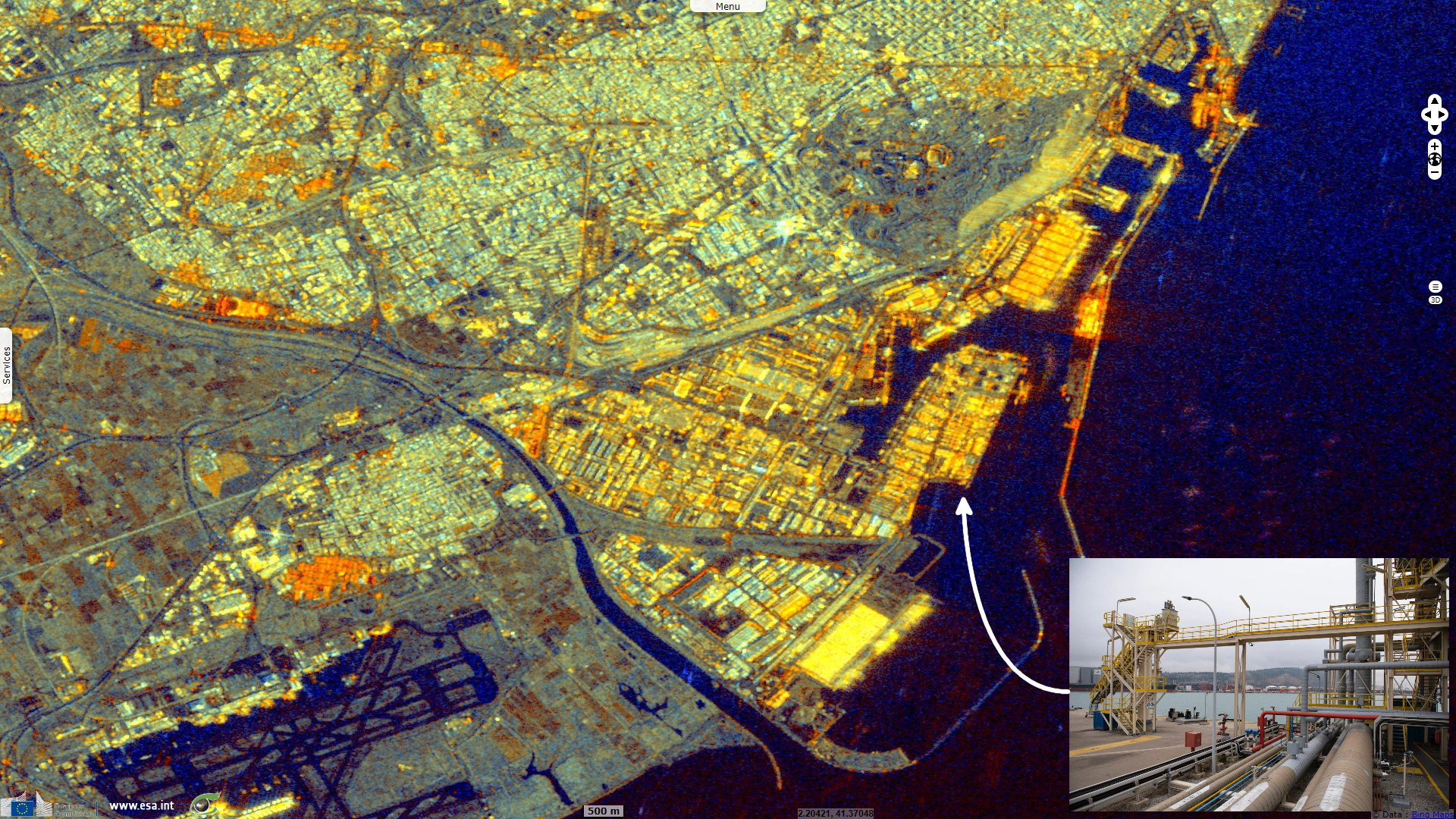