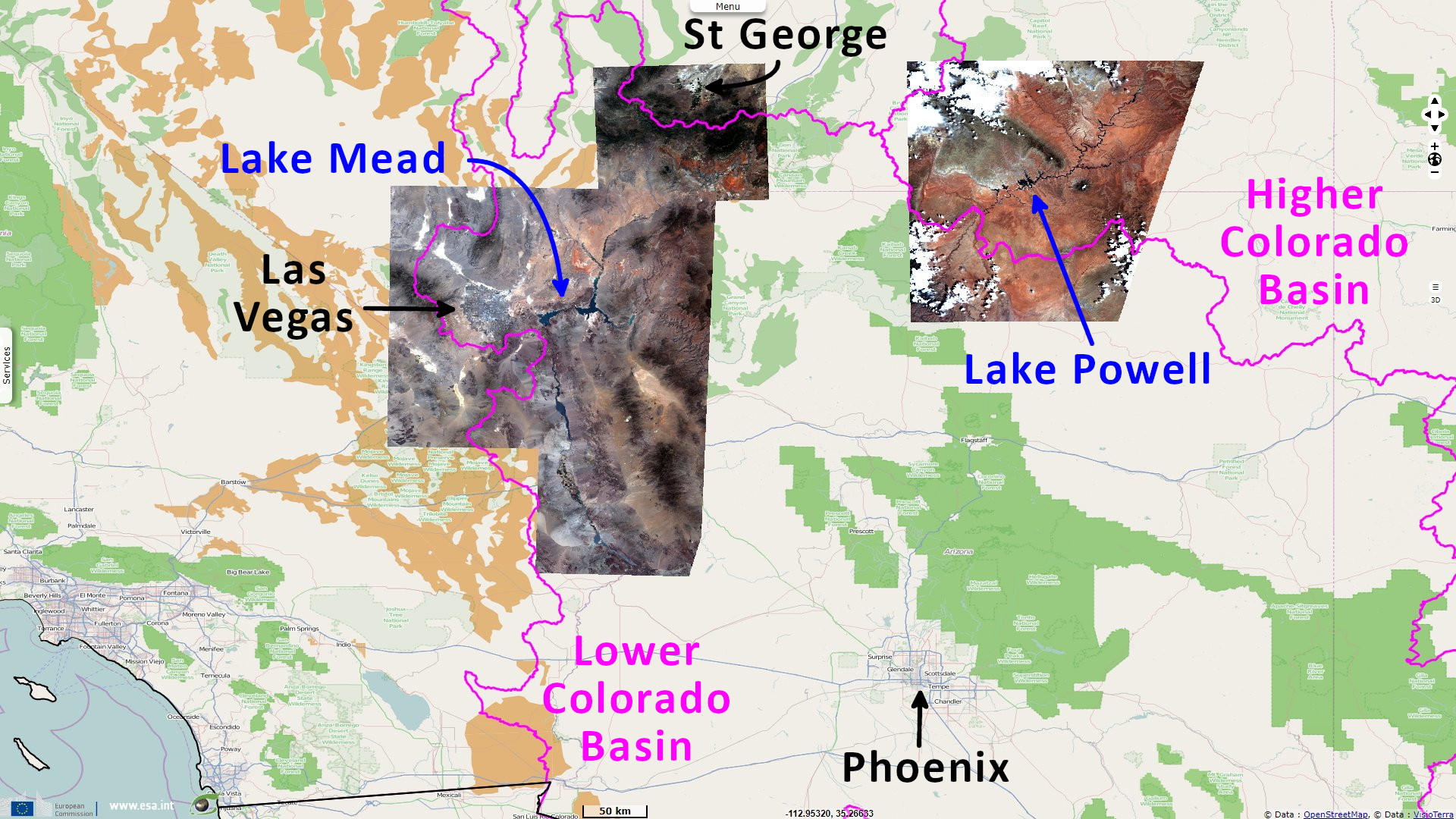 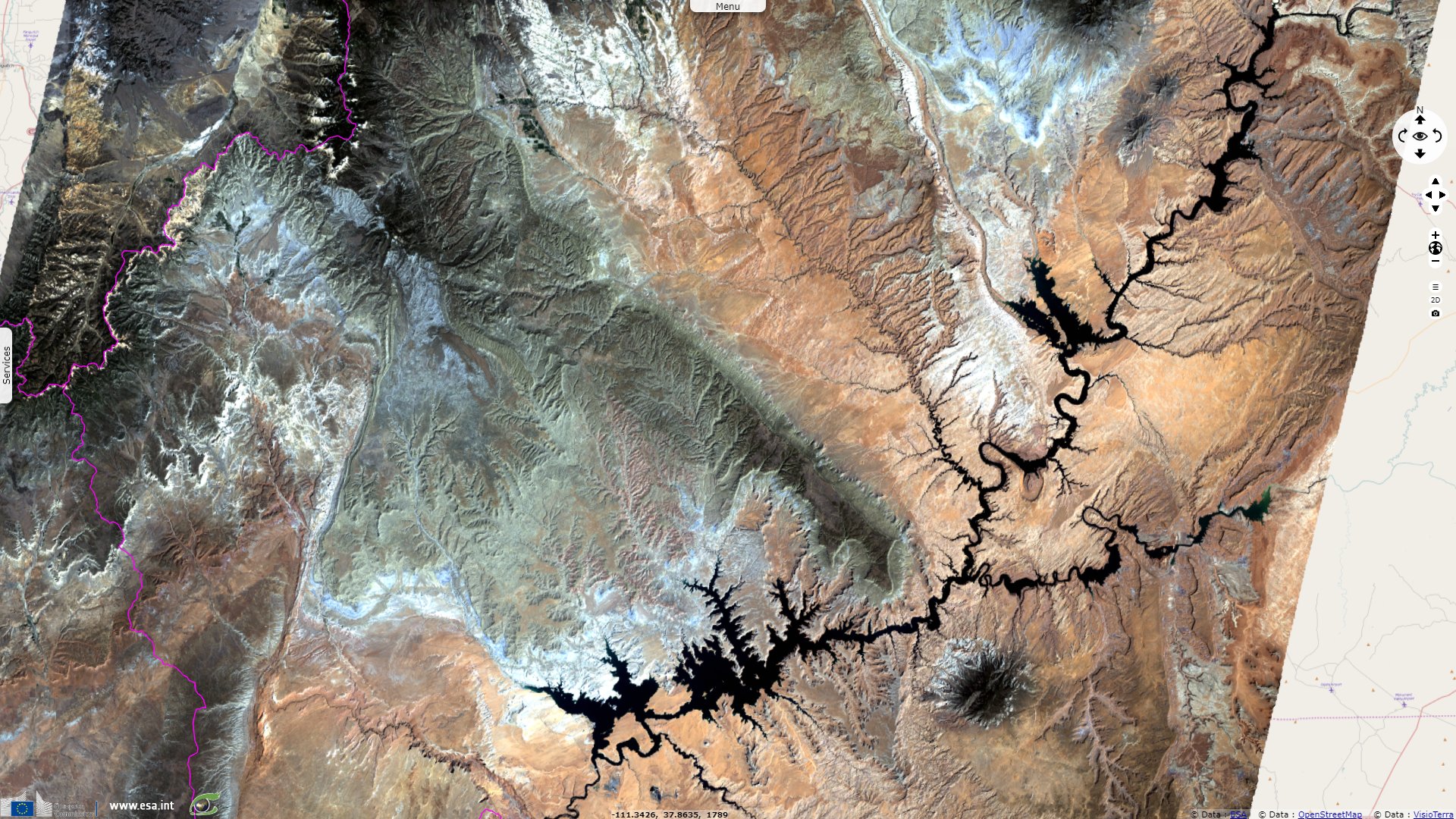 Concern is increasing regarding the water resources in South-West United States. The United Nations Environment Program develops on the matter: "Two of the largest reservoirs in America, which provide water and electricity to millions, are in danger of reaching ‘dead pool status.’ A result of the climate crisis and overconsumption of water, experts say. Lake Mead, in Nevada and Arizona, and Lake Powell, in Utah and Arizona, are currently at their lowest levels ever. ‘Dead pool’ status would mean the water level in the dams was so low it could no longer flow downstream and power the hydroelectric power stations. The Lake Mead reservoir, which is the largest artificial body of water in America, was created in the 1930s by the construction of the Hoover Dam, an engineering masterpiece. Lake Powell, the second largest, was created in the 1960s, with the construction of the Glen Canyon Dam."
Fig. 3 - S2 (26.08.2017) - In 2017, the lake had lost a large part of its volume.
3D view 3D animation 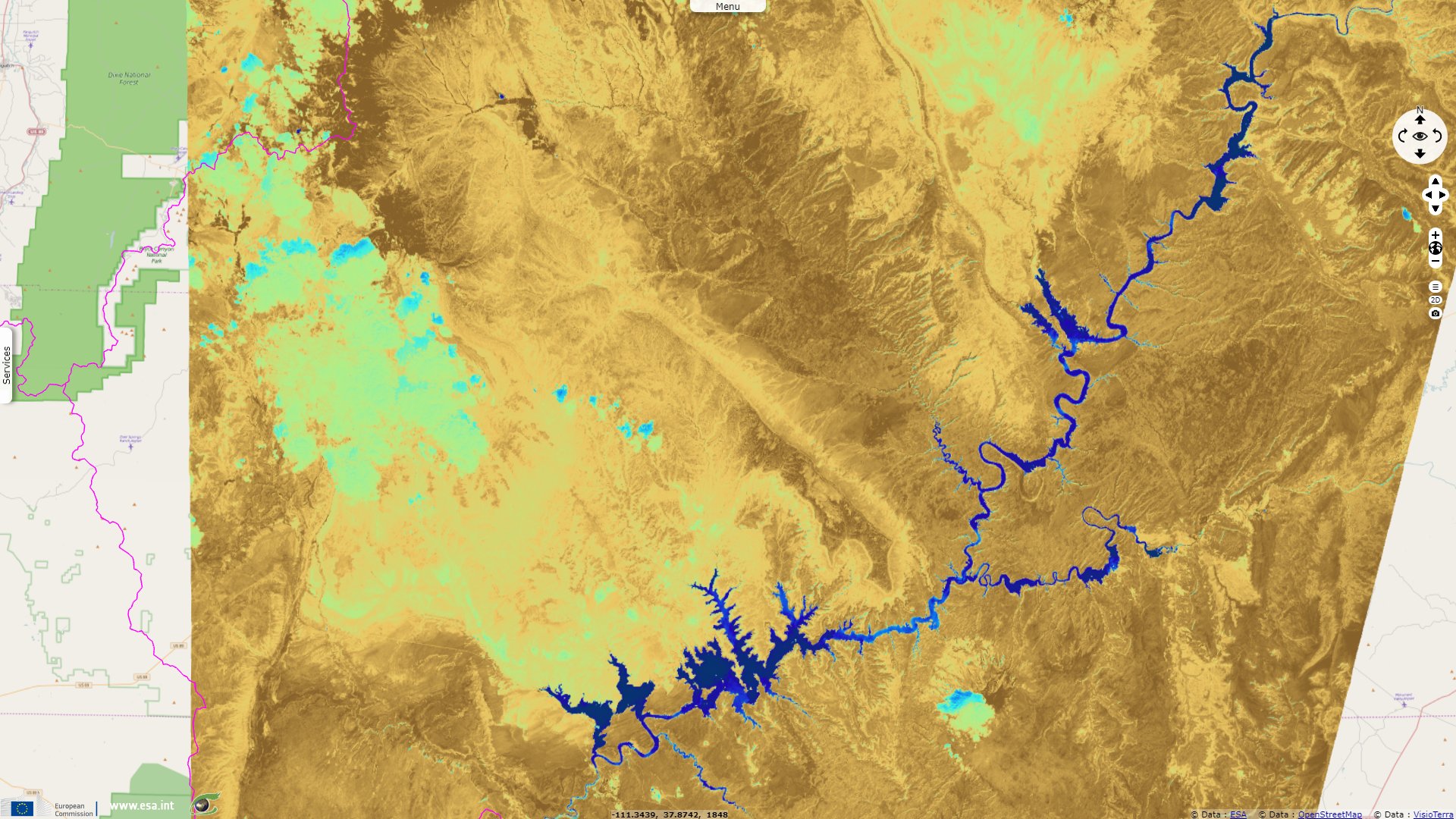 "'The conditions in the American west, which we're seeing around the Colorado River basin, have been so dry for more than 20 years that we're no longer speaking of a drought,' said Lis Mullin Bernhardt, an ecosystems expert at the United Nations Environment Programme (UNEP), 'We refer to it as 'aridification' - a new very dry normal.'"
Fig. 4 - S2 (21.07.2022) - The worsening drought caused the lake level to drop further in five years.
3D view 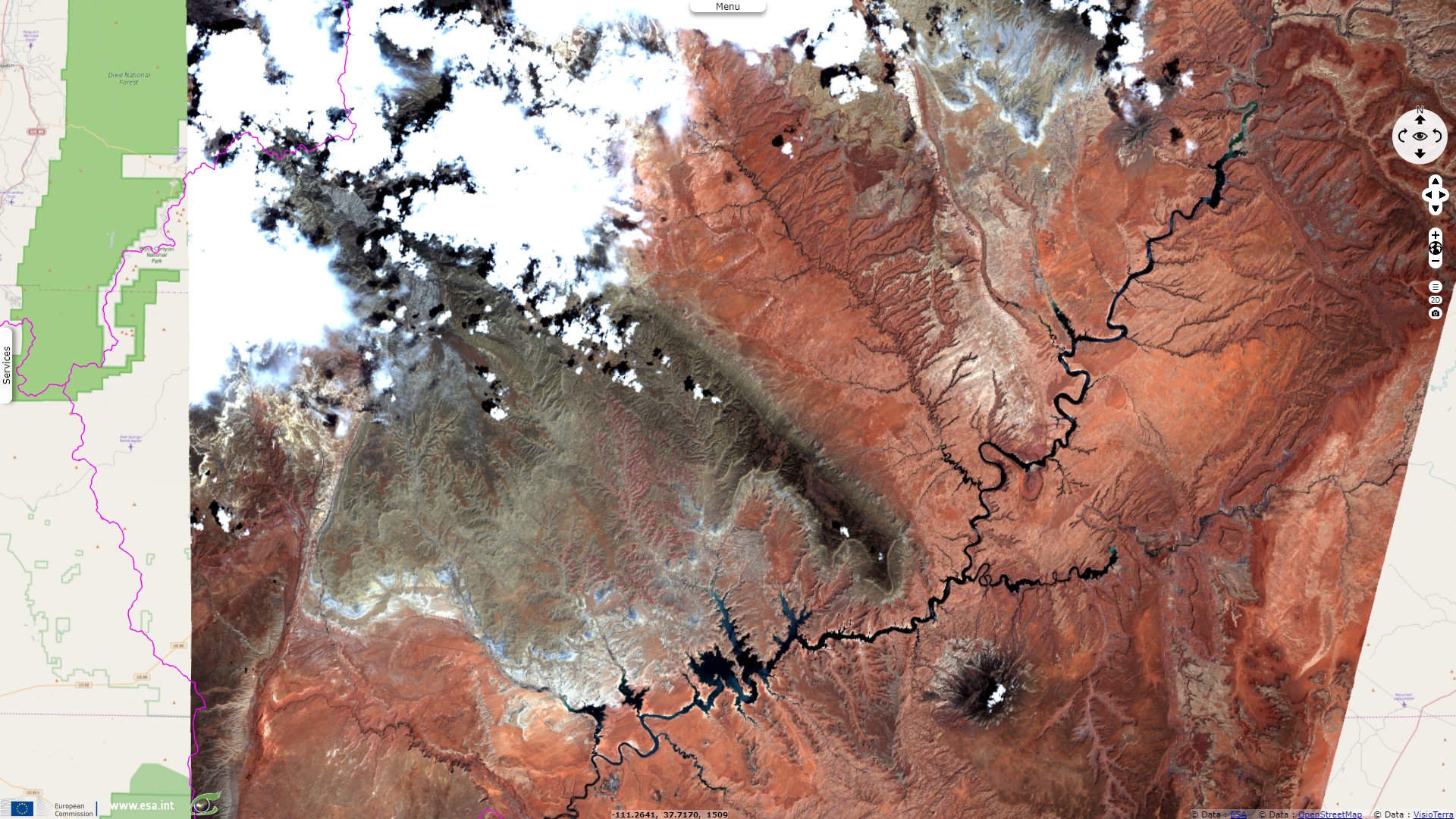 "Lake Mead and Lake Powell, which is created by the Glen Canyon Dam, not only provide water and electricity to tens of millions in Nevada, Arizona, California, Wyoming, Colorado, New Mexico and Mexico, but they also provide irrigation water for agriculture. Experts warn that as the crisis deepens, water cuts will need to be introduced, but this may not be enough."
Fig. 5 - S2 (1985; 2017; 2022) - This multidate composite shows the decrease of the lake surface.
3D view 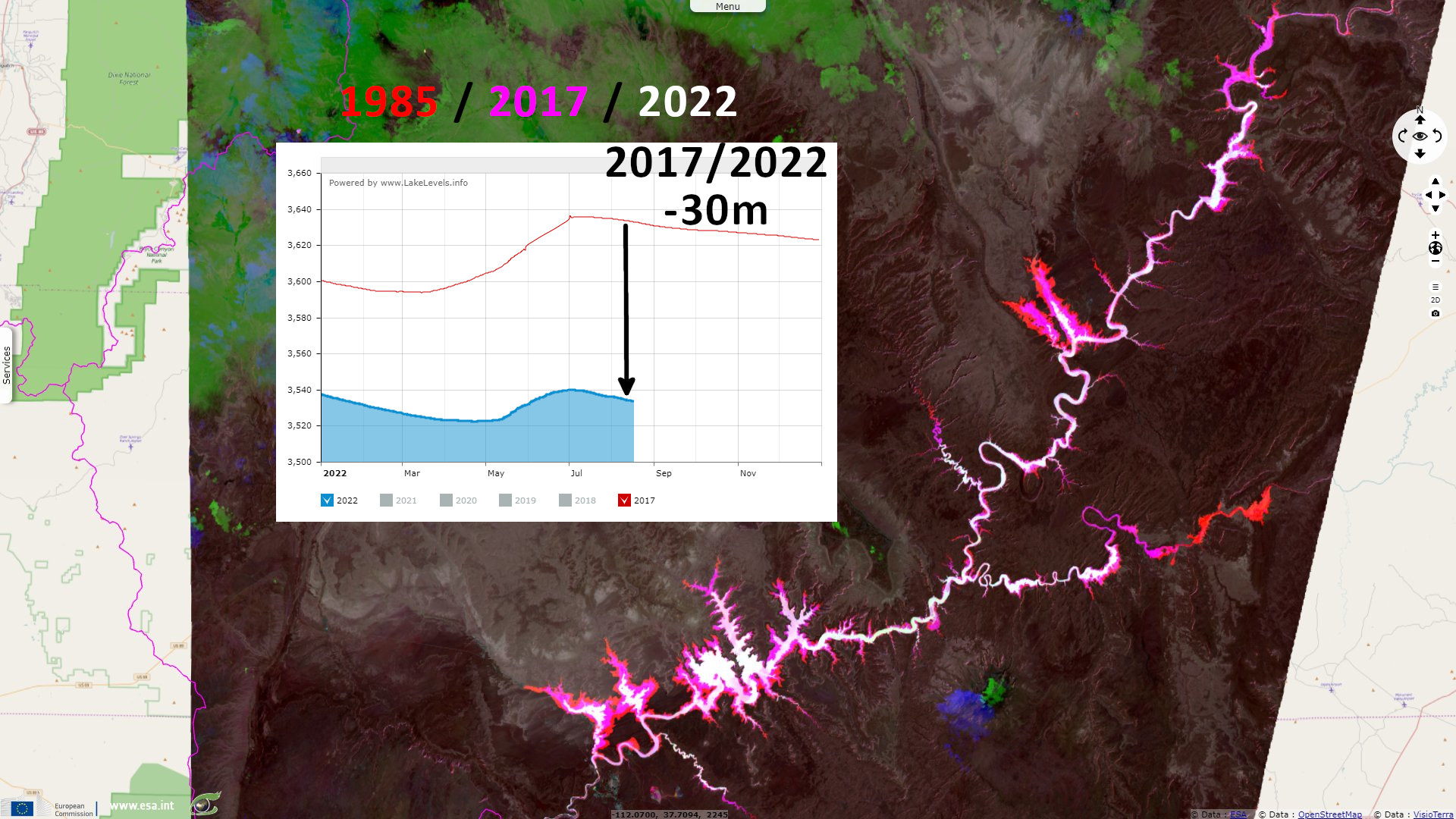 "Increases in water demand due to growing populations and irrigation for agriculture have been compounded by climate change impacts such as reductions in precipitation and temperature rises. A rise in temperature leads to increased evaporation of surface water and baking of the earth, decreasing soil moisture."
Fig. 6 - S2 (1985; 2017; 2022) - Zoom on the lower part of the lake near Glen Canyon Dam.
3D view 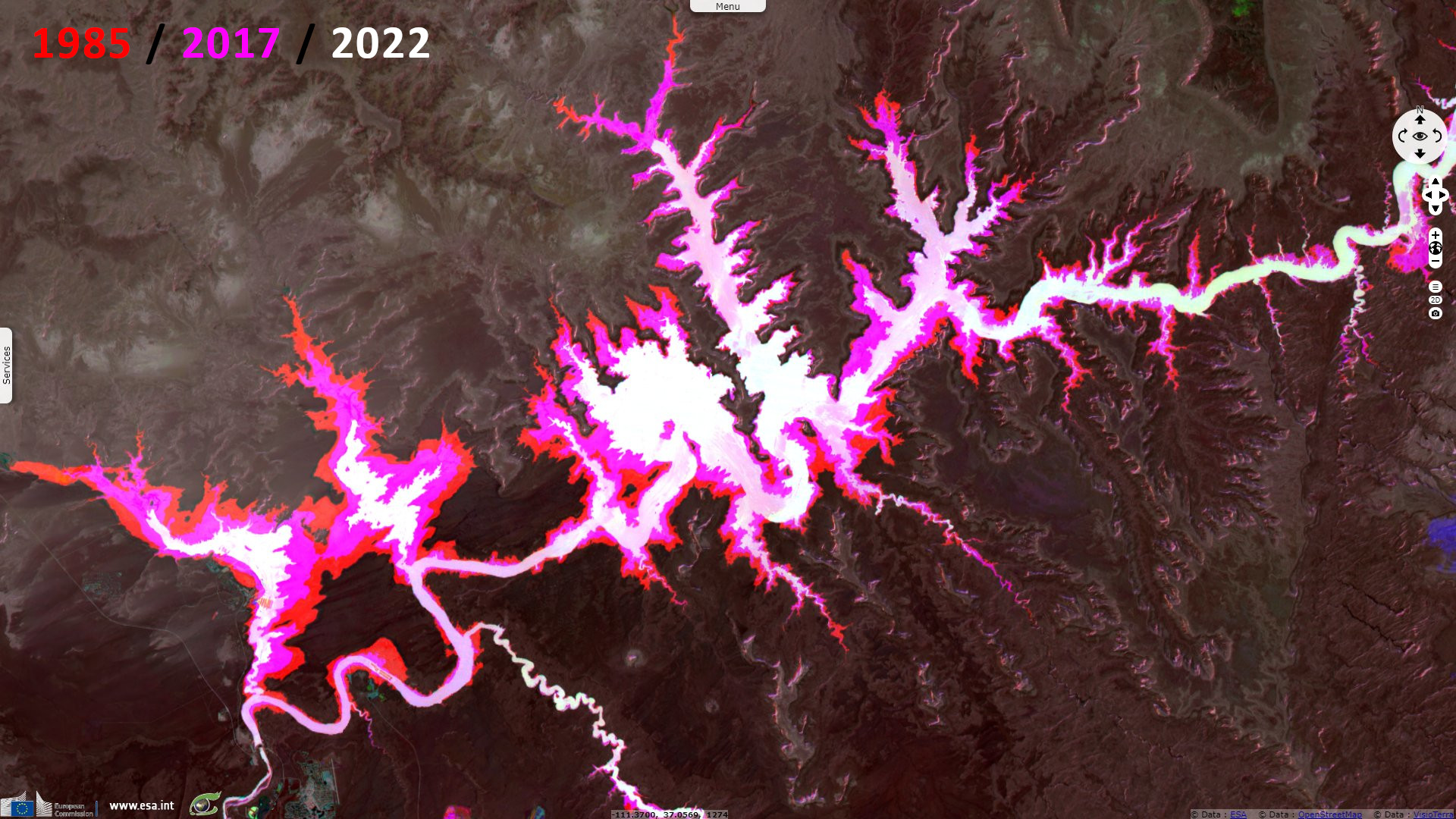 This issue is further increased by the unrestricted use of water in some of these desert areas, as explained in this article: "Utah has a unique system of delivering irrigation water to residential yards that dates back to the 1800s, when the state was settled by Mormon pioneers. It allows homeowners to access untreated agricultural water from canals, sold at an unmetered flat rate, to irrigate their lawns, gardens and landscaping. In Utah 61% of the state’s 462 urban water suppliers provide their customers with untreated secondary water. In nearly all cases, this is billed at a flat rate – often as little as $10 to $15 per month – meaning the customer can use all they want and the cost never changes. Sometimes the fee is even disguised among other charges on an annual property tax bill."
Fig. 7 - Landsat-5 (06.08.1985) - Further downstream, Lake Mead is located between Arizona and Nevada, next to Las Vegas.
3D view 3D animation 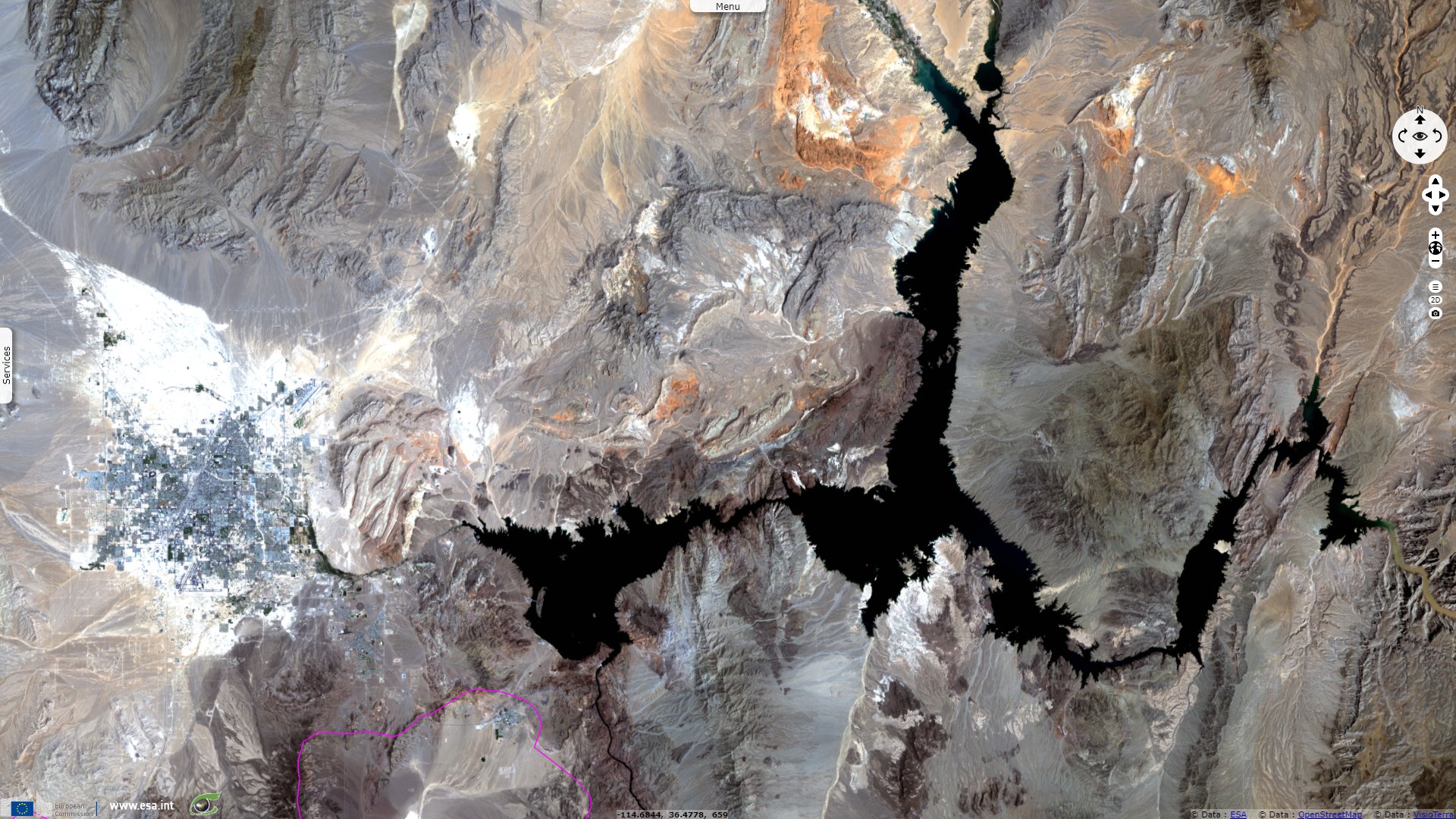 "In one analysis, the state compared Salt Lake County, which does not provide secondary water, with two neighboring counties that do, Davis and Weber. It found that in those counties residents consumed 78% more water per capita than Salt Lake residents. The difference was almost entirely due to the availability of unmetered secondary water."
Fig. 8 - S2 (04.07.2020) - View of the Open Water index over Lake Mead in 2020.
3D view 3D animation 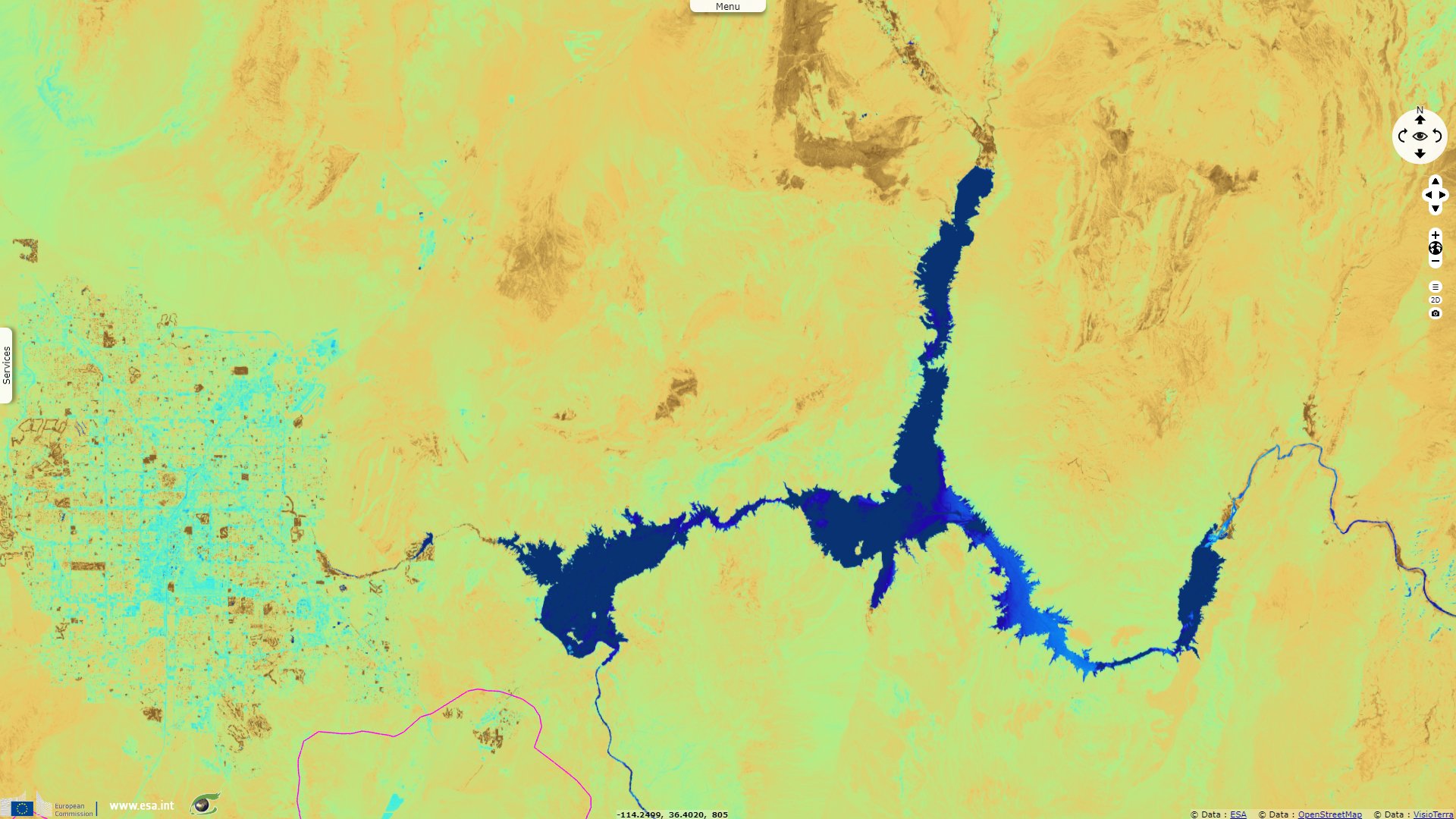 Jake Bullinger adds for Wired: "Lately, the desert has blossomed nowhere more than the St. George area, in the state’s southern reaches. The city is a picturesque outpost, with red-rock desert framing bright green lawns and golf courses, all built around the stark white Mormon temple in the center of town."
Fig. 9 - S2 (21.07.2022) - In just two years, the lake has lost an significant amount of its surface.
3D view 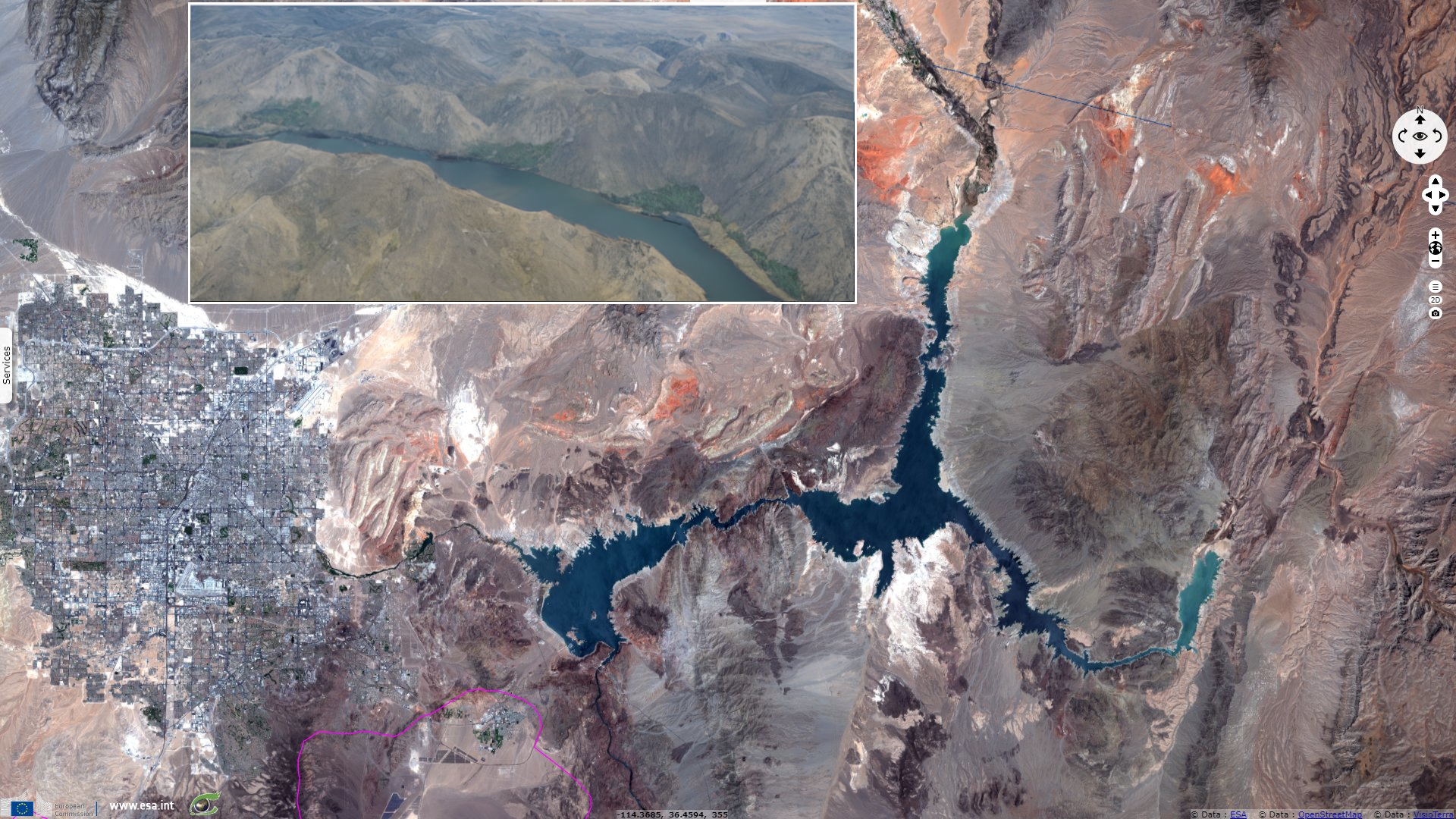 "Brigham Young’s adherents came here to grow crops, primarily cotton—hence its reputation as Utah’s Dixie. Today, that ceaseless sunshine is luring so many tourists, retirees, and students that St. George has become the fastest-growing metropolitan area in the country." The population of the country rose from 14 000 in 1970, to 49 000 in 1970 and 180 000 in 2020. "The growth likely won’t slow any time soon: State demographers believe the area will surpass 500 000 residents by 2065. "In 2010—the latest state data available—the St. George region’s per-capita consumption was [1230 L] per day. More current numbers from the city suggest conservation; St. George proper uses [950 L] per person per day." "Any major reduction in consumption here will require a cultural shift. St. George is marketed as a desert oasis. Nine golf courses are located in the region, and it remains an agricultural stronghold."
Fig. 10 - S2 (1985; 2020; 2022) - This multidate composite highlights the drop in the volume of the lake.
3D view 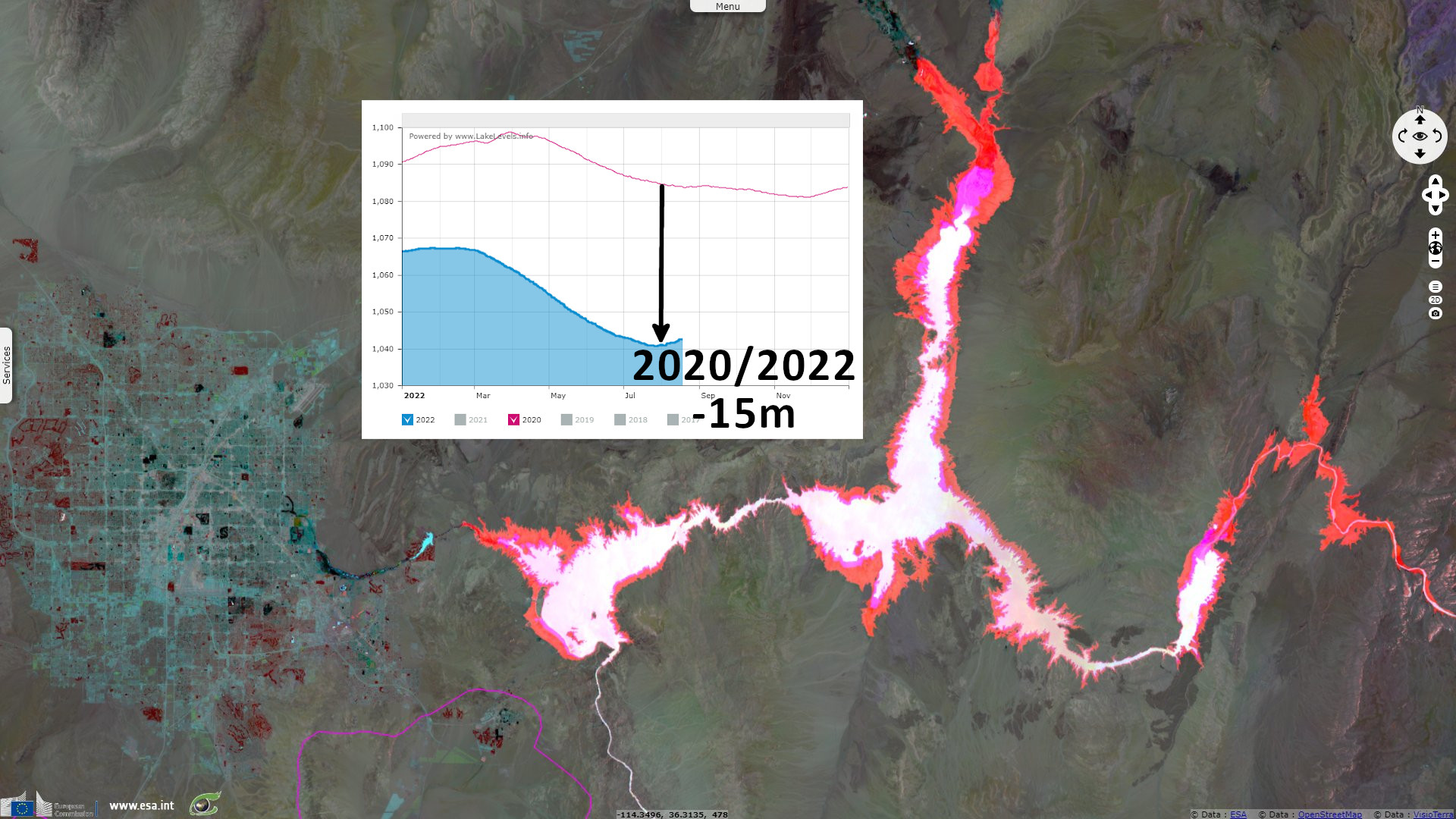 "Political leaders at the state and local level view this primarily as a supply issue. Their preferred solution is a gargantuan $1.4 billion pipeline that would connect the region with Lake Powell, a reservoir along the Colorado River. With the aid of pumping stations, the pipeline would shuttle water over [225 km] and [610 m] of elevation gain. The goal is to store [0.1 km3] a year in nearby reservoirs and aquifers—more than enough, officials say, to meet the demand of the growing population and decrease reliance on the dwindling Virgin River, currently Washington County’s primary water source." "In a letter to Utah’s governor, economists at state universities said that water rates would have to jump sixfold for the region to meet its repayment obligations."
Fig. 11 - S2 (15.08.1985) - View of St George, Utah, in 1985. It lies in an arid area between Lake Powell and Lake Mead.
3D view 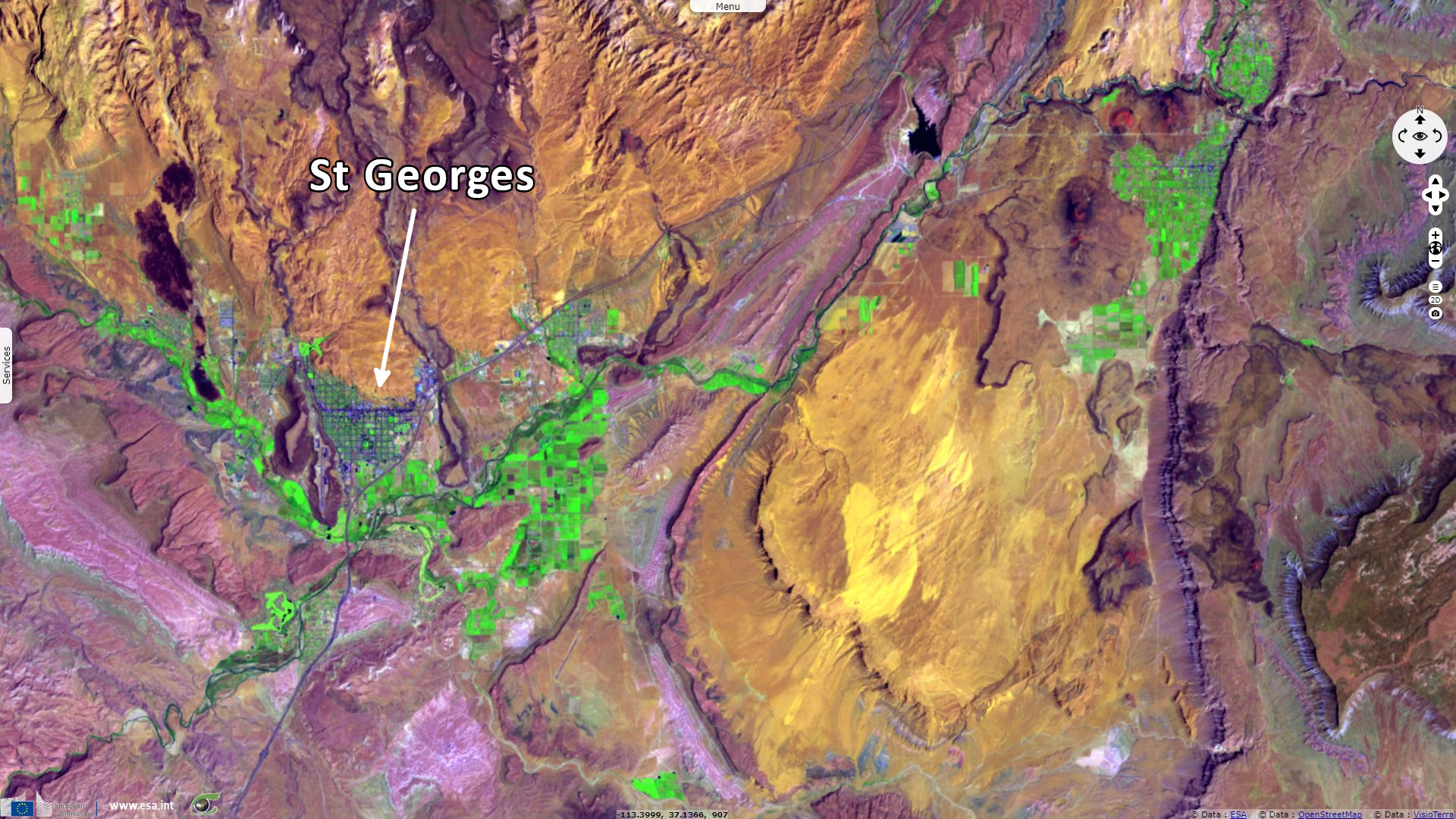 "Utah typically uses less than its allotted share of Colorado River water, which is divided up among Western states, but climate change and growing populations are taxing relations among the river’s interstate constituents." Phil Clark brings additional context for the local news Lake Powell Chronicle: Utah insists that it has rights to the water and is entitled to 23% of the [9.3 km3] apportioned to the upper basin states. Others interpret the law to mean that Utah is entitled to 23% of the available upper basin flow and not a specific amount.
Fig. 12 - S2 (04.07.2022) - Cheap water availability allowed the population to boom, but lack of water is threatening further growth.
3D view 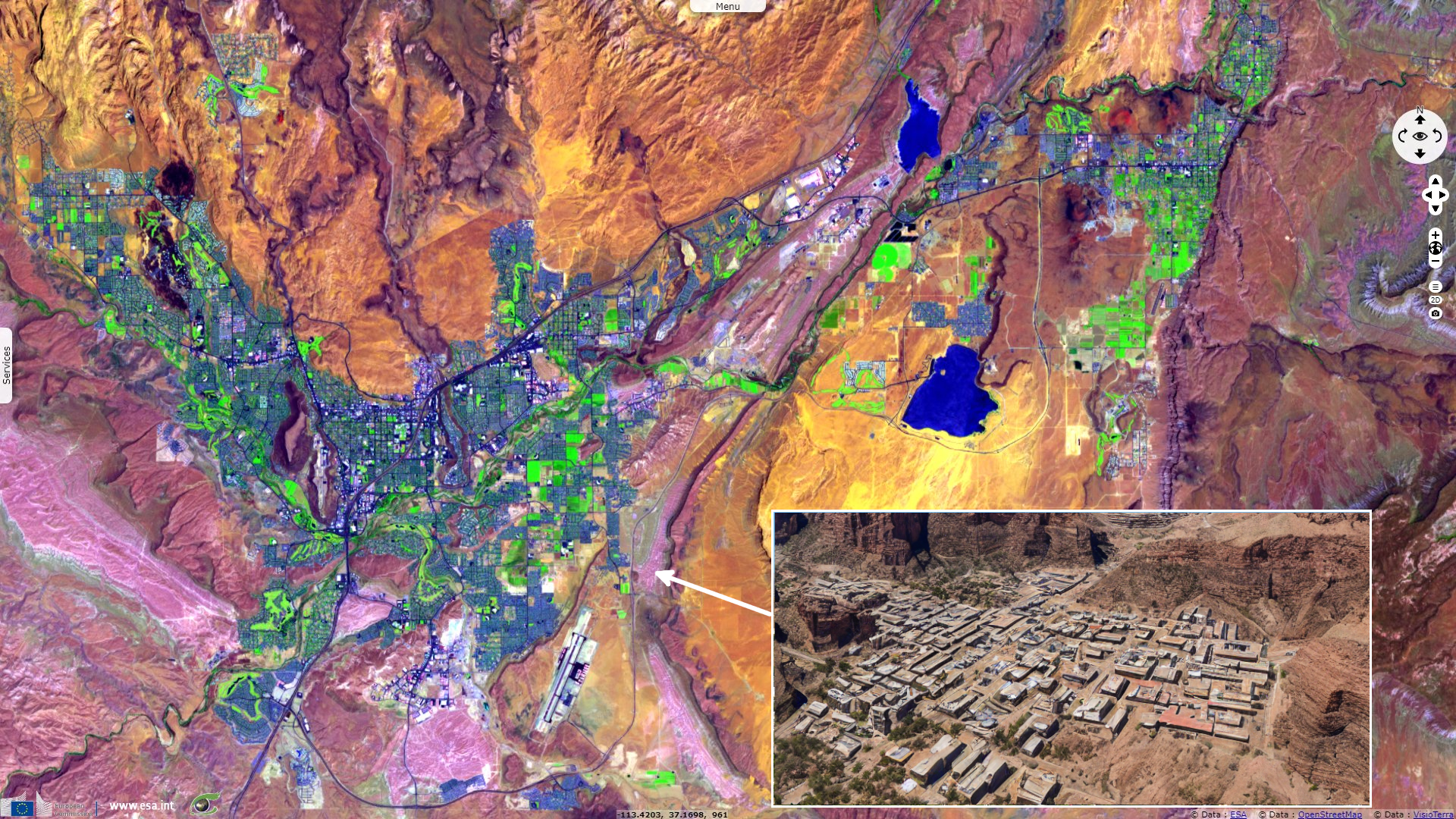 "J.B. Hamy, director of the Imperial Irrigation District in California, said project like the Lake Powell Pipeline make no sense. 'Things like continued sprawl, demands for new sources of water being taken from this declining stream, which is the Colorado River, do not make sense when we’re dealing with what could be potentially catastrophic at a point where you physically cannot pull water either out of Lake Powell or Lake Mead,' he said."
The views expressed herein can in no way be taken to reflect the official opinion of the European Space Agency or the European Union.
Contains modified Copernicus Sentinel data 2023, processed by VisioTerra.