Fig. 1 - Cop DEM 30 shows many sites of the region lie at the foothills of the Kopet Dag range.
2D view

In 1904 the archaeological expedition of the Carnegie Institution (Washington, D.C.) under the direction of R. Pumpelly, with permission from the Russian Imperial Archaeological commission (Saint-Petersburg), conducted archaeological excavations in Anau. These were the first archaeological excavations in Turkmenistan in the 20th century. The South Turkmenistan Complex Archaeological Expedition (STACE) was initially organized by the orientalist Mikhail Evgenievich Masson in 1946. The Chalcolithic settlements of southern Turkmenistan, according to Masson, date to the late 5th millennium – early 3rd millennium BC, as assessed by carbon dating and paleomagnetic studies of the findings from the excavations carried out by STACE in the Altyndepe and Tekkendepe. The foothills of the Kopetdag mountains have revealed the earliest village cultures of Central Asia in the areas of Namazga-Tepe (more than 50 ha) and Altyndepe (26 ha), Ulug Depe (20 ha), Kara Depe (15 ha), and Geok-Syur (12 ha). In 1952, Boris Kuftin, established the basic Chalcolithics to Late Bronze Age sequence based on the excavations carried out at Namazga-Tepe (termed Namazga I-VI).
Fig. 2 - S2 (19-22.11.2021) - Kopetdag mark the border between Iran (south-west) and Turkmenistan (north-east).
2D view 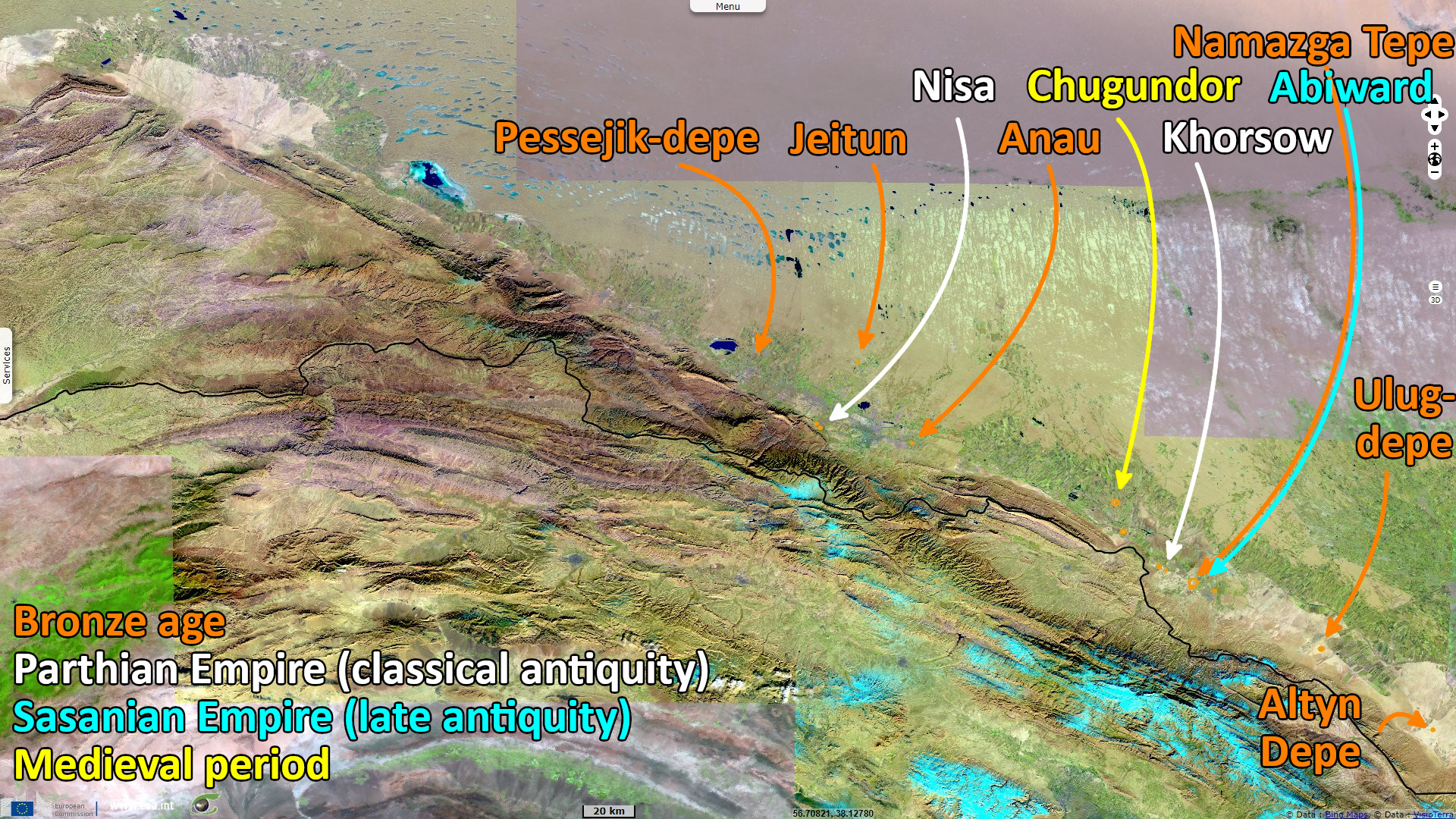 The explorations in the foothills of the Kopetdag revealed well developed irrigation systems with water control arrangements which resulted in prosperous, well settled large regional centres. The largest of these settlements is Namazga-Tepe with an area of 50 ha. The excavations done at this site lead to the discovery of six distinct periods. Named Namazgadepe I to VI, the periods extended over the late 5th millennium to early 3rd millennium BC. In the process of development over these centuries, the transition observed was from Chalcolithic period to Early Bronze Age with urban characteristics in the settlements. Dwelling houses also emerged from chaotically planned one room houses to larger houses with many rooms with the interiors painted (lac paintings) and with a hearth. Defensive forts were part of the settlements. Chalcolithic stone amulets with geometric shapes, pottery traditions with two-tiered furnaces for firing ceramics, terracotta figurines, stamp seals of clay and stone, and centres of metallurgical production were uncovered. Rosette and zoomorphic patterns were unearthed, representing various periods, both at Namazga-Tepe and also at other settlements in the foothills of the Kopetdag mountains. There is archaeological evidence of settlement in the well-watered northern foothills of the Kopet Dag during the Neolithic period. This region is dotted with the multi-period hallmarks characteristic of the ancient Near East, similar to those southwest of the Kopet Dag in the Gorgan Plain in Iran. At Jeitun, mud brick houses were first occupied c. 6000 BC. Also the foothills of the Kopet-Dag near Ashgabat are the site of the remains of the ancient Parthian city of Nisa.
Fig. 3 - S2 (19-22.11.2021) - Pessejik-depe is a neolithic site that includes wall painting.
2D view 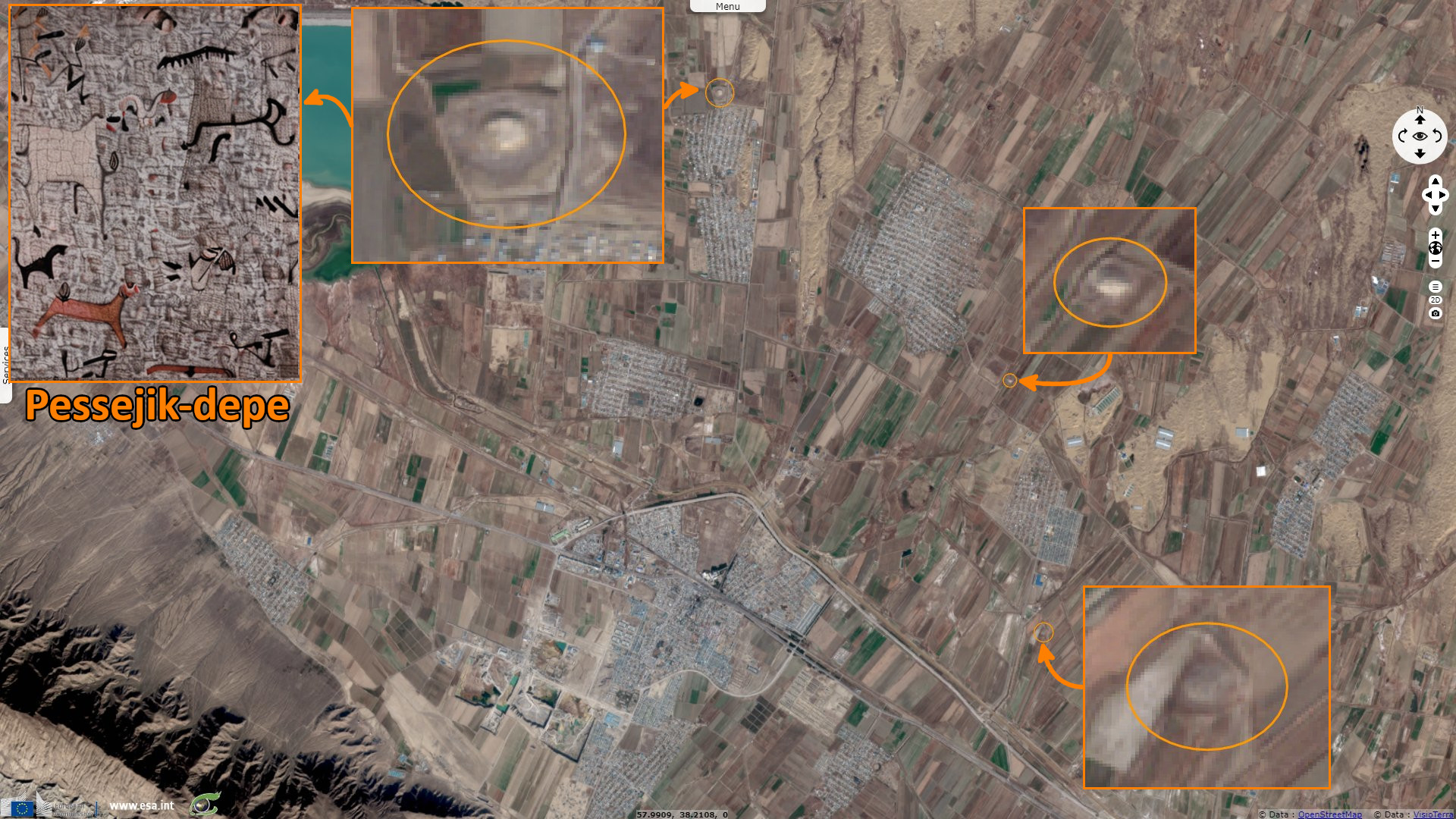 In 1967 O. Berdiev made a stratigraphic sounding in Neolithic site Pessejik-depe. In 1969 he discovered a large room with a wall painting, which had preserved polychrome traces The painting was made in red and black colours and presented different scenes of hunting and of animals escaping from beasts, with a hunter depicted in front of them.
Fig. 4 - S2 (19-22.11.2021) - Jeitun is an important site for the Neolithic period in Central Asia.
2D view 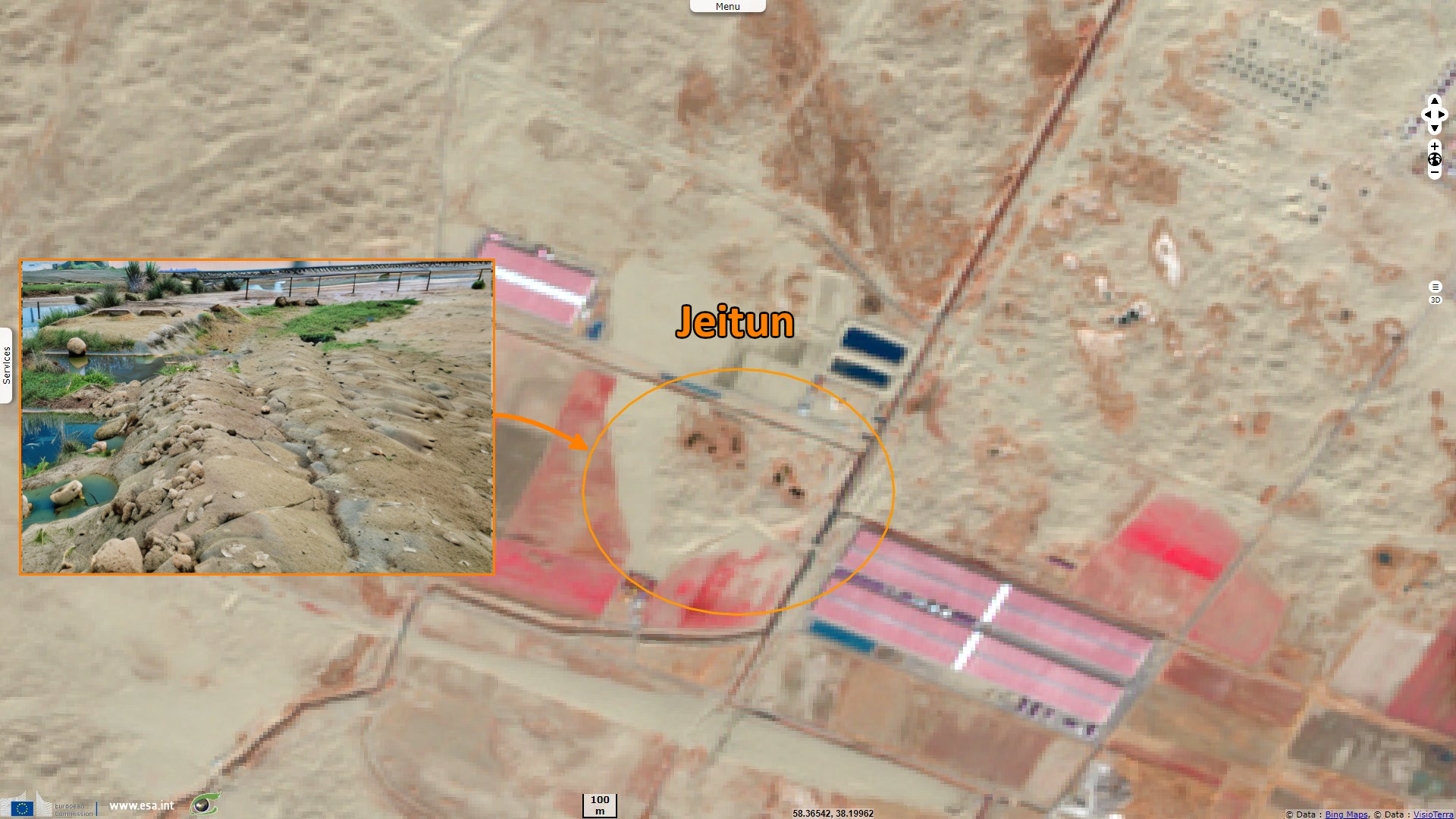 In 1935 A. Marushenko opened Monjukly-depe and later (1937) discovered Jeitun (20 km north-west of Ashgabat; the local name is Chakmakdash beyikligi, from Turkmen – “a flint hillock” and Jeitun means a place for collecting water). The 14th brigade of the YuTAKE led by B.A. Kuftin began the first excavation in Jeitun in 1952. Later on (1955-1958) works were continued by V.M. Masson. The new term 'Jeitun culture' for the Neolithic period in Central Asia was accepted. Jeitun is an archaeological site of the Neolithic period in southern Turkmenistan, about 30 kilometers north of Ashgabat in the Kopet-Dag mountain range. The settlement was occupied from about 7200 to 4500 BC possibly with short interruptions. Jeitun has given its name to the whole Neolithic period in the foothills of the Kopet Dag. The people of the Jeitun culture were growing barley and two sorts of wheat, which were harvested with wooden or bone knives or sickles with stone blades. Stone handmills and other stone tools were found. The site seems to show the oldest evidence of arable farming in Central Asia. Sheep and goats were already domesticated by the villagers; but they also engaged in hunting to supplement their diet.
Fig. 5 - S2 (19-22.11.2021) / S1 (04.11.2022) - The remains of Old and New Nisa, settlements of the Parthian Empire, are UNESCO World Heritage sites.
2D view 2D view 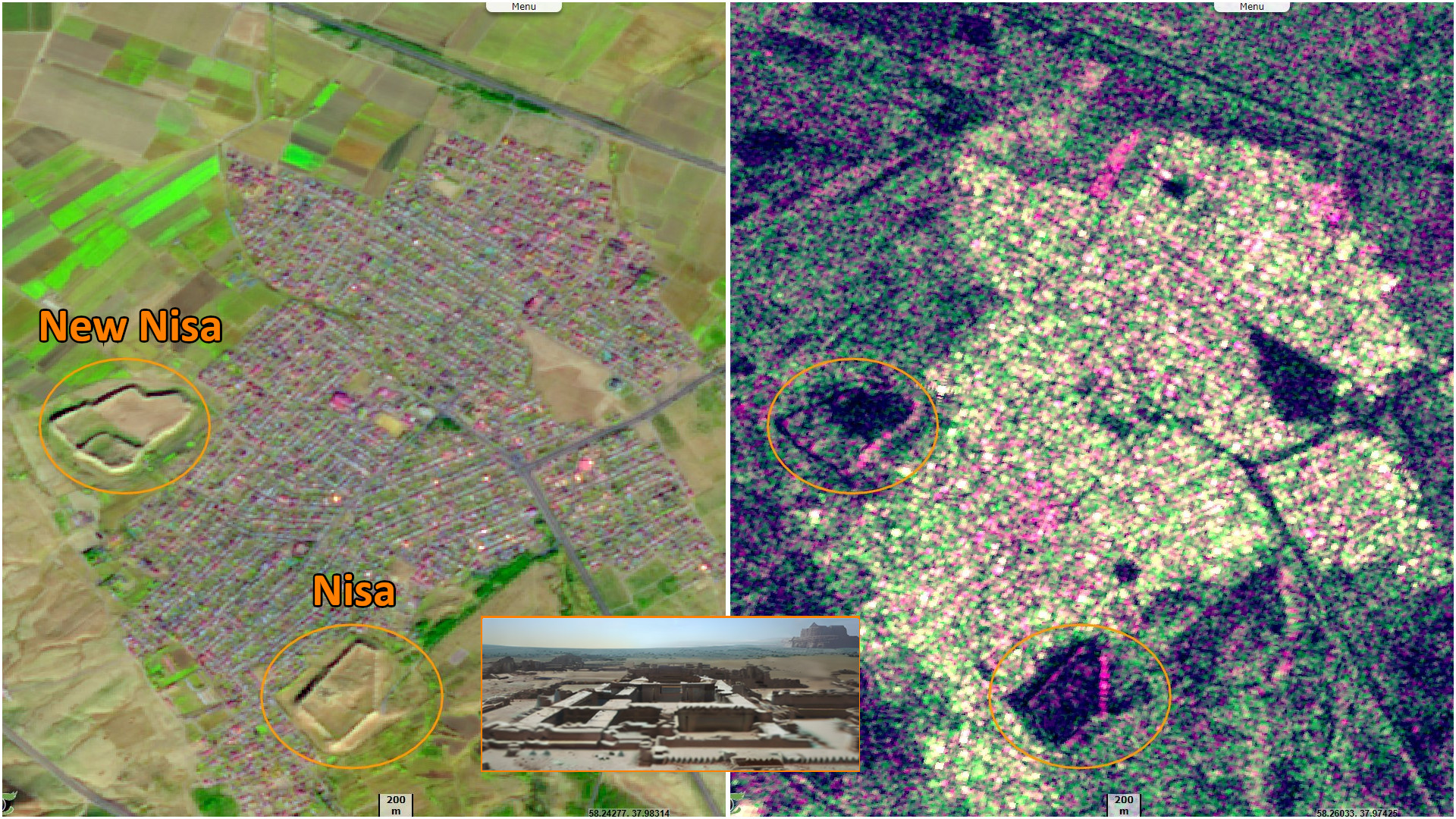 Nisa was an ancient settlement of the Parthians, located near Ashgabat, Turkmenistan, 18 km west of the city center. Nisa is described by some as the first seat of the Arsacid Empire. It is traditionally assumed to have been founded by Arsaces I (reigned c. 250 BC–211 BC) and was reputedly the royal residence of the Parthian kings, although it has not been established that the fortress at Nisa was either a royal residence or a mausoleum. Nisa was a major trading hub in the Parthian Empire. Nisa was totally destroyed by an earthquake, which occurred during the 1st decade BC. The Parthian Fortresses of Nisa in Turkmenistan contain the remains of two cities from the 3rd Century BC to the 3rd Century AD.
Fig. 6 - S2 (19-22.11.2021) / S1 (04.11.2022) - Anau is an early Bronze Age site.
2D view 2D view 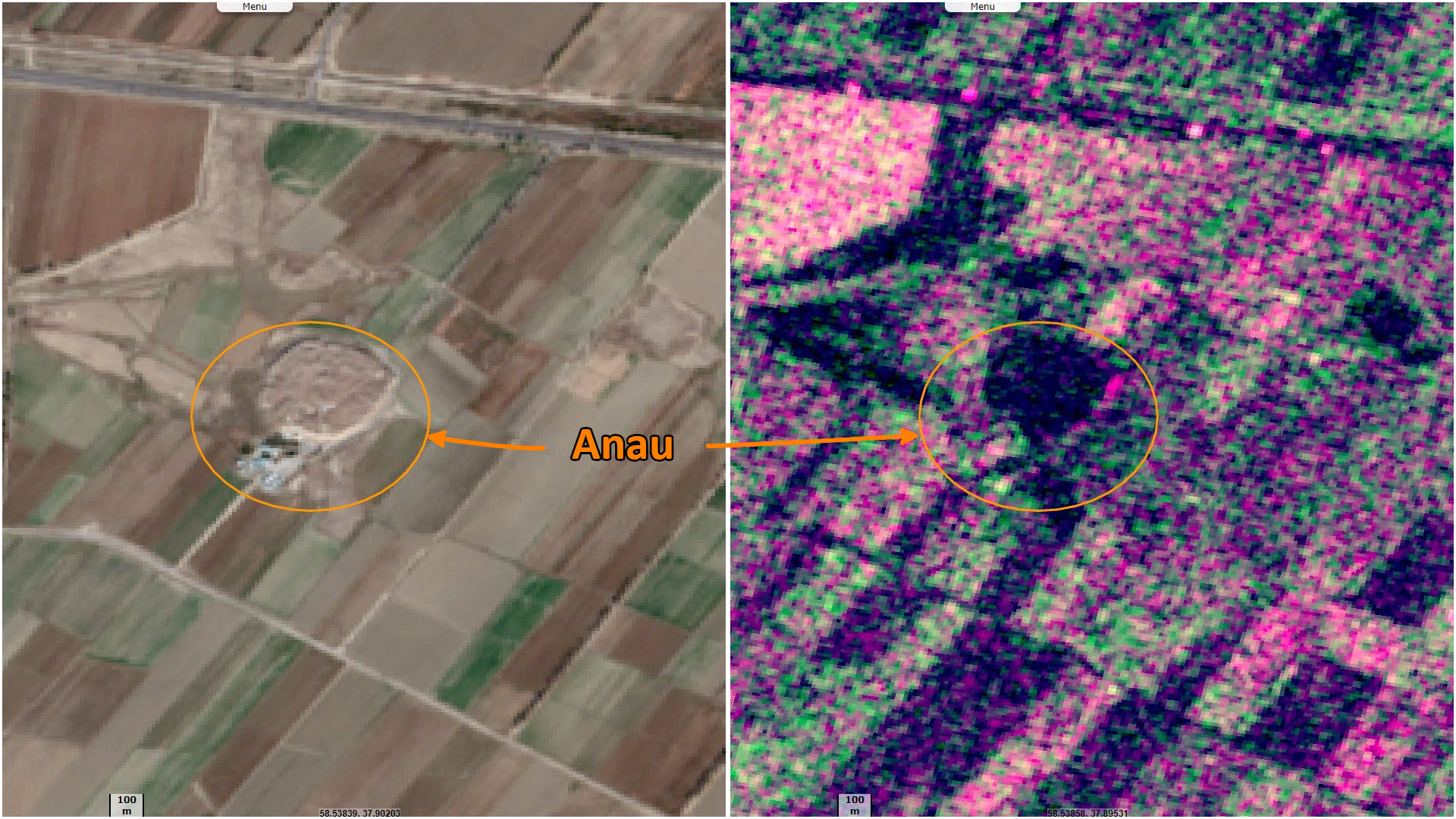 The Anau culture was an ancient agricultural civilization of Central Asia centred in southern Turkmenistan. It is named after its main site of Anau, Turkmenistan. The settlement of Anau started around 4500 BC in the Neolithic period, before copper was used. Anau includes two mounds, north and south. Archaeological research here began in 1890.
Fig. 7 - S2 (19-22.11.2021) - The historical monument Chugundor from the medieval period that was surrounded by a moat and walls 6 km long and 2 m high.
2D view 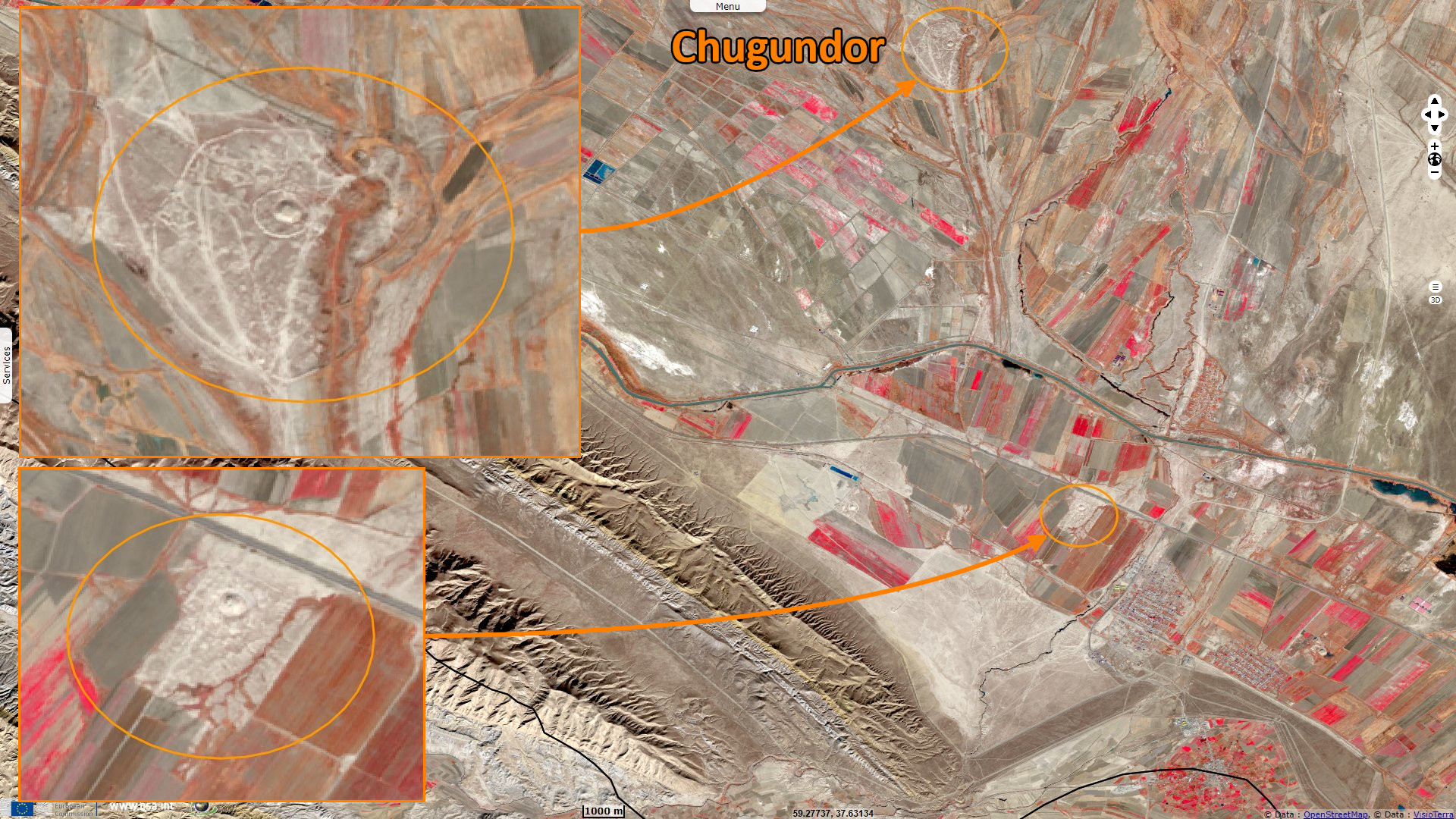 The historical monument Chugundor in the town of Kufen is oval in the shape, the town was surrounded by walls and a moat. The walls were 6 km long and 2 m high. The town had five gates, three of which were located in the eastern part of the settlement. Still we can see the remains of white buildings and the mausoleum. In early medieval historical sources we can fine the other name of the town - Kufen. To the west there is a Mausoleum Chugundor Baba the end of XI - the beginning of XII centuries, till I half of the XI - XII centuries on the territory of the settlement was erected a fortification which in XI - XII centuries converts into the flourishing town Abiverd.
Fig. 8 - S2 (19-22.11.2021) - Khorsow-Gala is probably of a Parthian-era village, associated with the Khorsow Fortress.
2D view 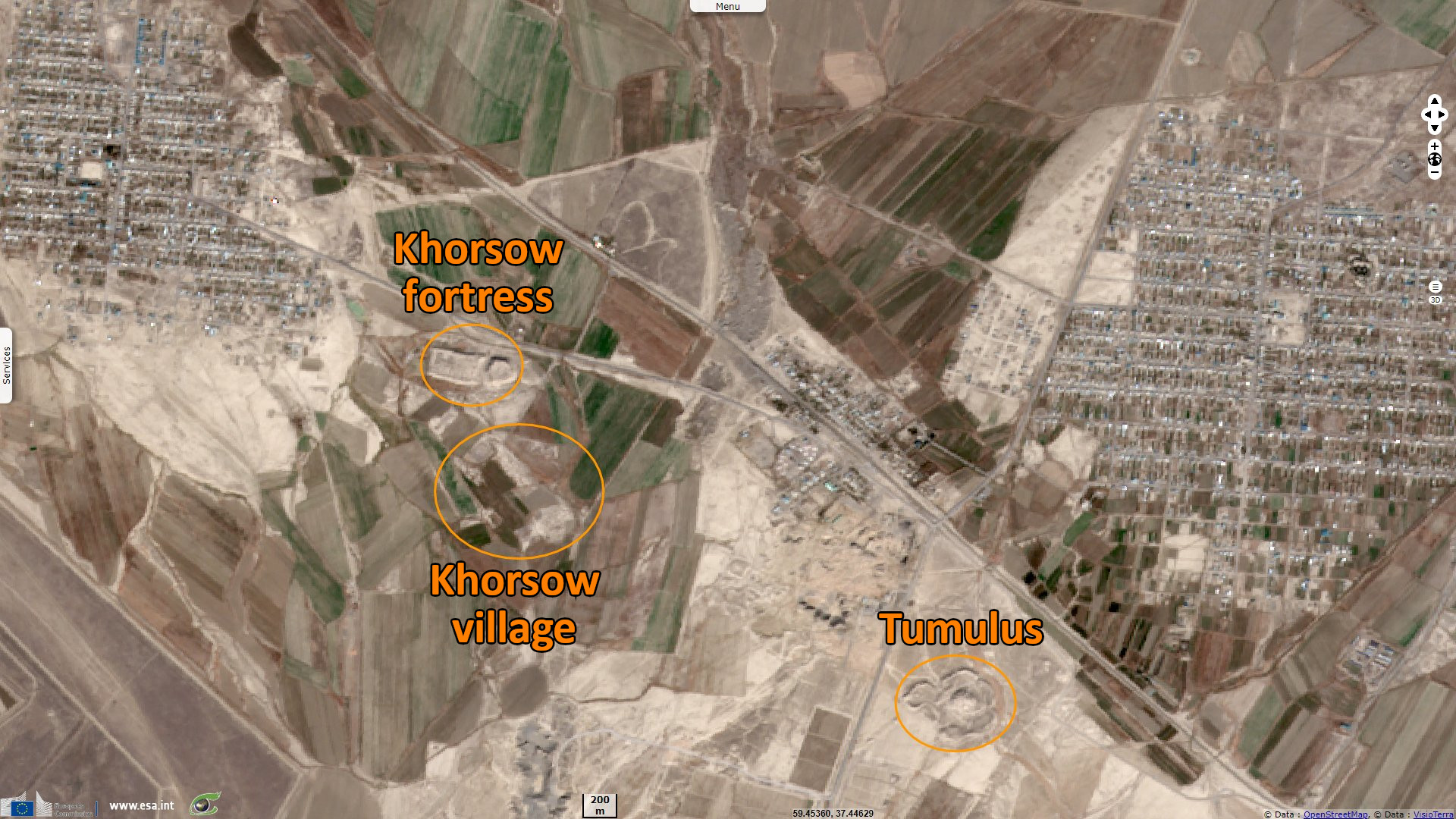 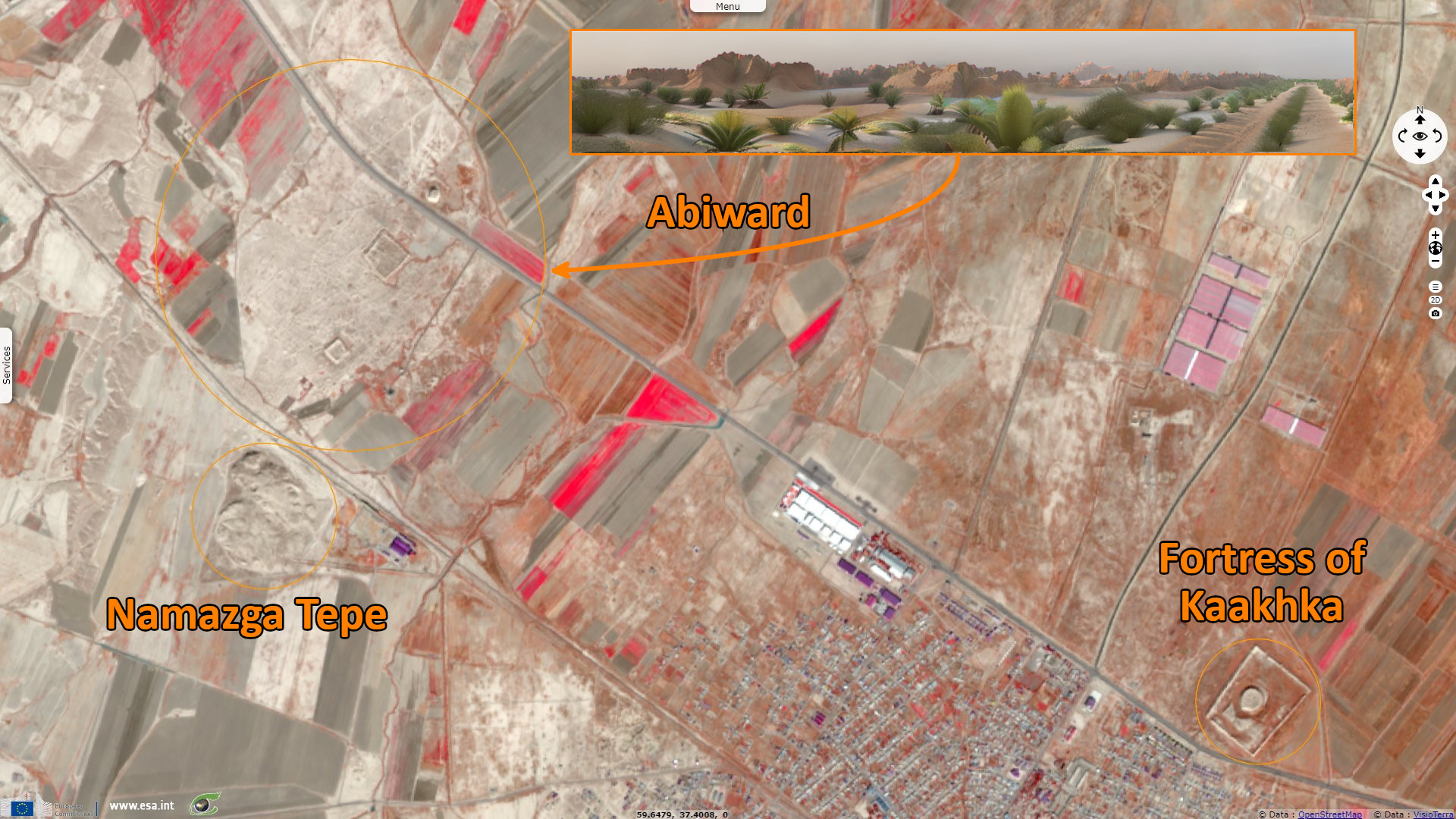 Namazga-Tepe or Namazga-depe, is a Bronze Age (BMAC) archaeological site in Turkmenistan, some 100 km east of Aşgabat, near the border to Iran. Excavated by Vadim Mikhailovich Masson, Viktor Sarianidi, and I. N. Khlopin from the 1950s, Namazga Tepe first dates from the Early Chalcolithic (c. 4000-3700/3500). The site set the chronology for the Bronze Age sites in Turkmenistan (Namazga III-VI). Namazga III (c. 3200-2800) as a village settlement in Late Chalcolithic phase, and Namazga IV (c. 2800–2400 BC) as a proto-urban site, both belong to the Late Regionalization Era. Namazga V (c. 2400–2000 BC), is in the Integration Era or the period of "urban revolution" following the Anatolian model with little or no irrigation. Namazga-Tepe emerges as the production and probable governmental center, covering some 60 hectares.
Fig. 10 - S1 (30.10.2022) - More recent, the ancient Sassanid city of Abiward covers a wider area than all other sites mentioned here.
2D view 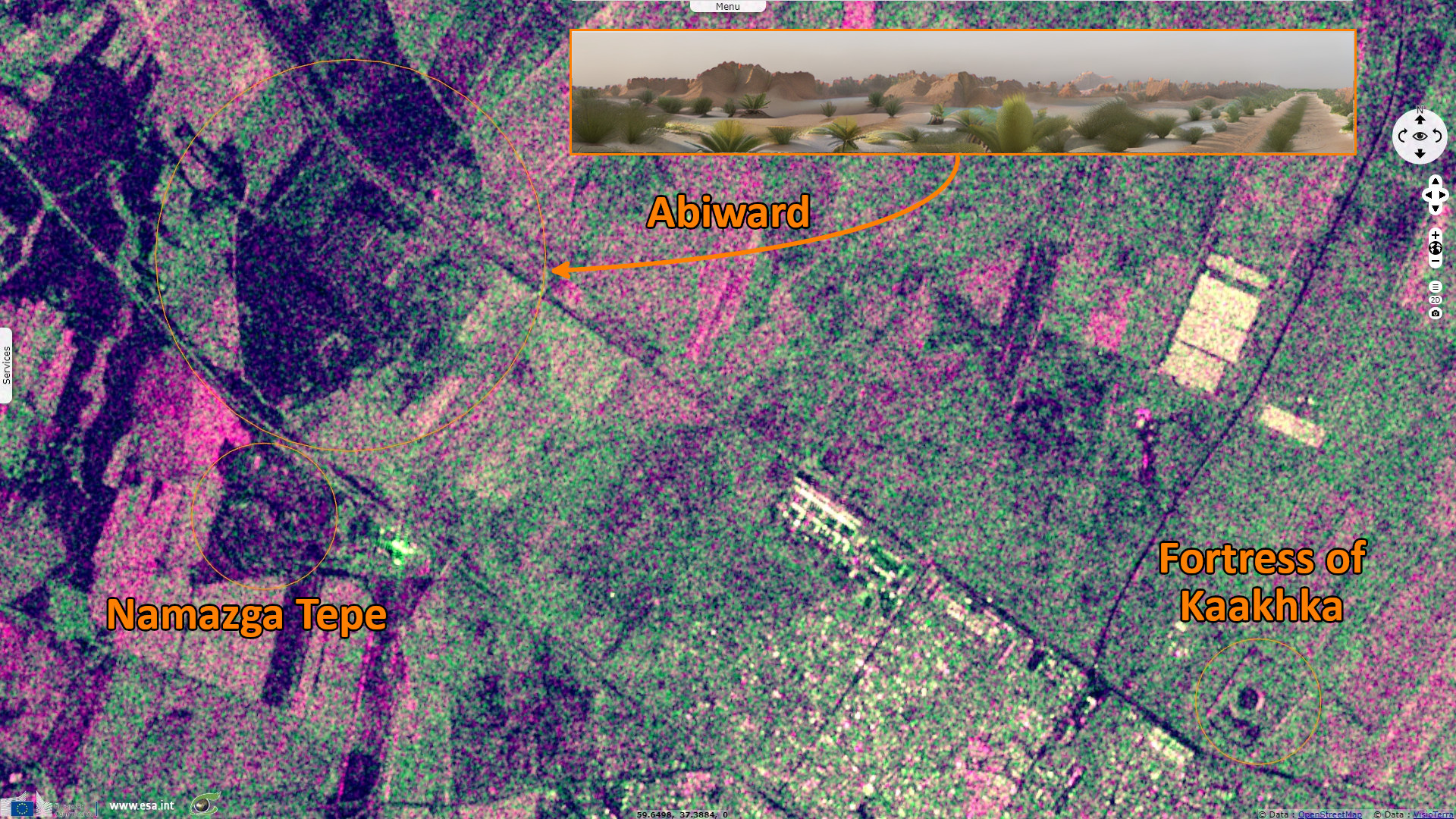 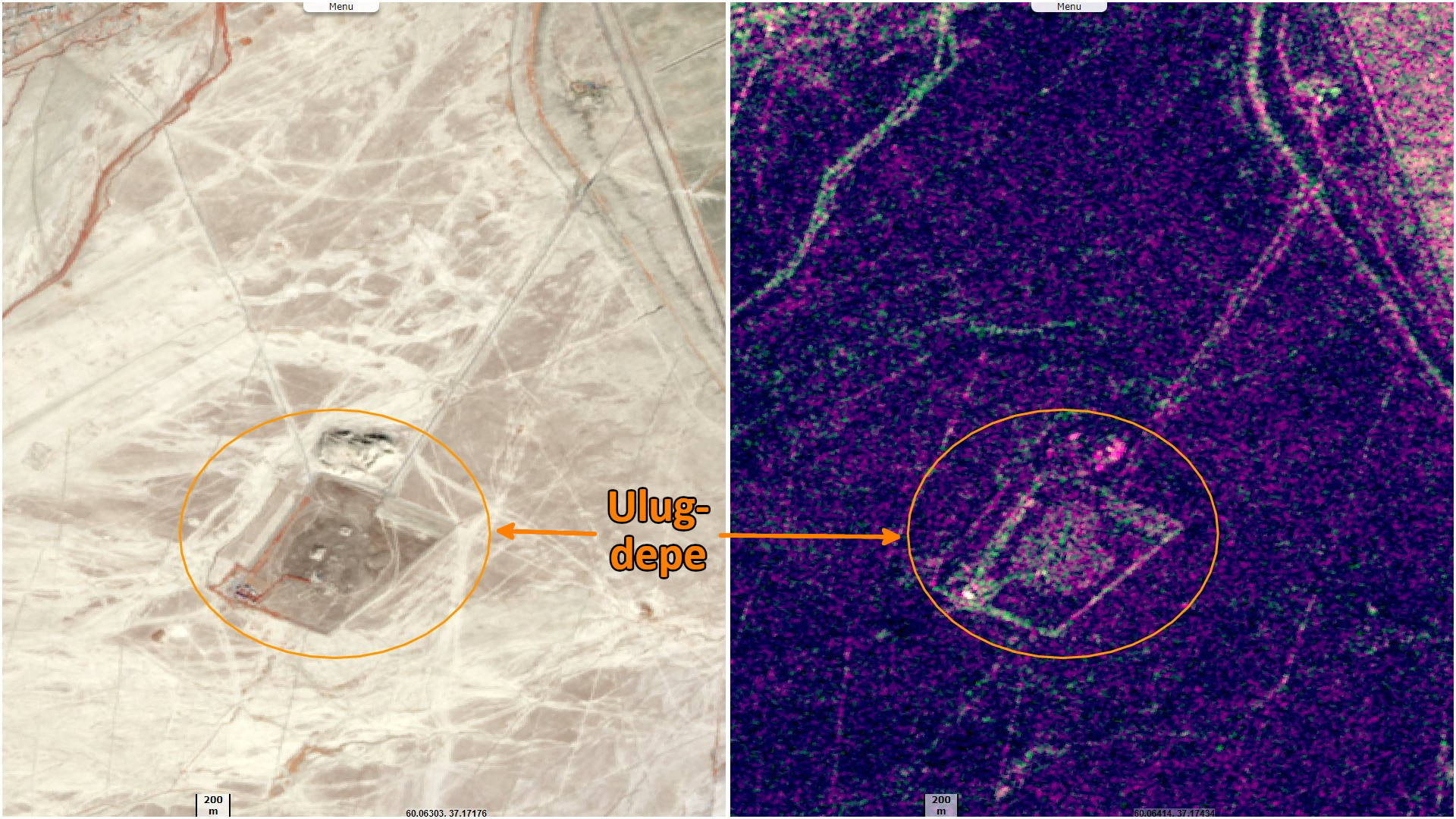 Altyndepe is a Bronze Age (BMAC) archaeological site in Turkmenistan, near Aşgabat, inhabited first from c. 3200 to 2400 BCE in the Late Regionalization Era, and from c. 2400 to 2000 BCE in the Integration Era as a full urban site. Around 1600 BC, Altyndepe is abandoned. Altyndepe was likely a secondary capital. Altyndepe overlooks the Tedzen delta at the foot of Kopetdag. A settlement of 25 ha area with a total stratification thickness of 30 metres with an 8 metres strip of human habitation was found. This excavated tepe turned out to be a large settlement, 2.5 kilometres in length and 0.5 kilometres in width, and was identified as a major Bronze Age town. From the highest point of this tepe, a trench was dug to a depth of 30 metres and the section was logged, which revealed layers of the Bronze Age, of neolithic and Eneolithic periods.
Fig. 12 - S2 (19-22.11.2021) / S1 (30.10.2022) - At the east of the Kopet Dag area, Altyndepe is an important Bronze Age site that even included a ziggurat.
2D view 2D view 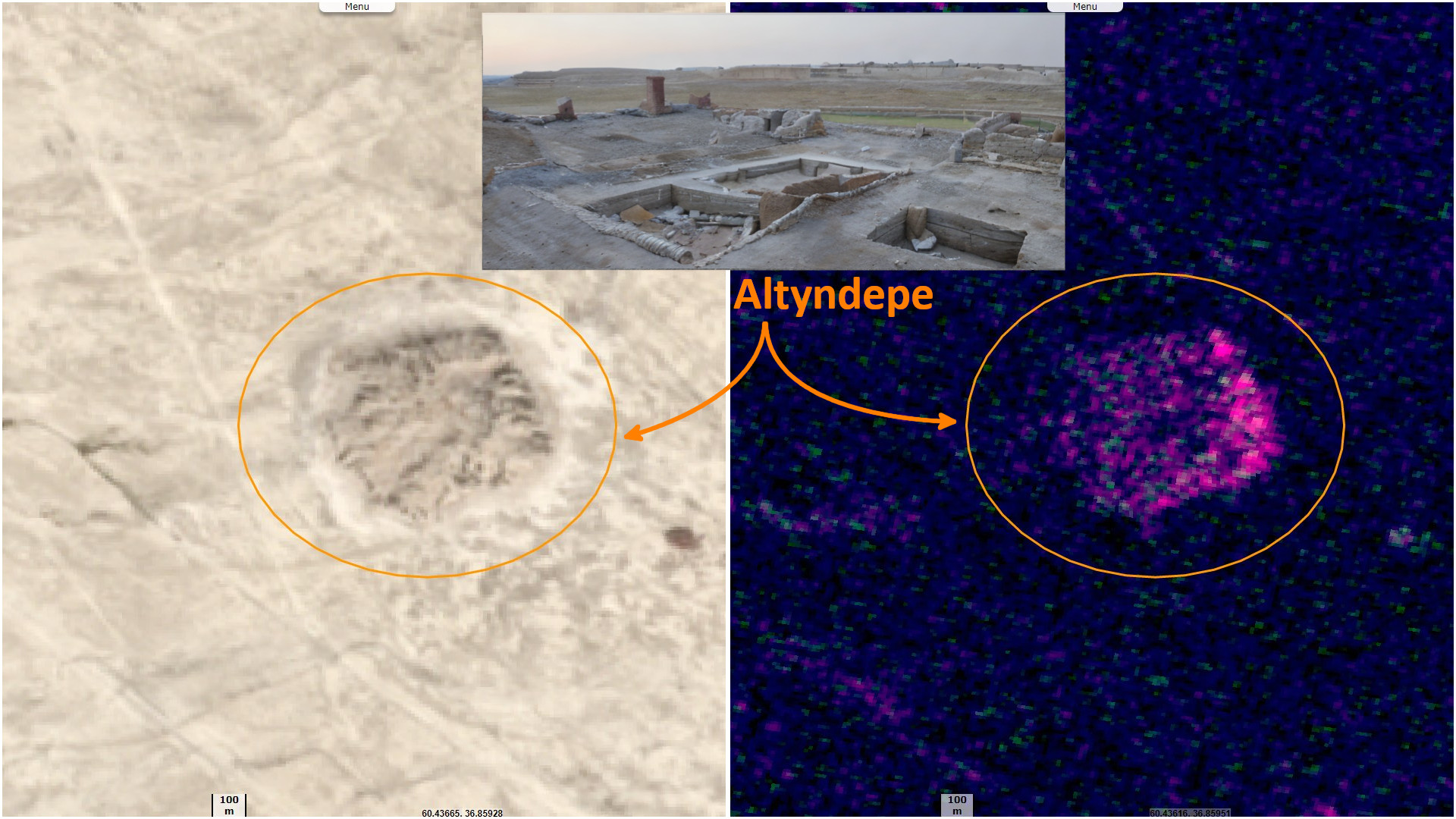 Early Bronze period fort walls with decorated towers and a huge entrance had encircled this settlement, though when found, they were in ruins. Discoveries by Soviet archeologists dated the finds at this place, in a chronological order, to the later half of the third millennium BC. Altyn-Depe also provided a link to the several Bronze Age cultures of Eurasia. The most notable findings in the burial ground of the elite, located in the outskirts of Altyndepe, were "a disk-like stone 'weight', a miniature column, more than 1500 beads, a steatite plate with an image of cross and half-moon, a moulded clay wolf, as well as a golden head of a bull with a turquoise sickle inlaid in the forehead". Excavations revealed bone and copper artifacts of the fifth millennium BC (Neolithic period), female figurines painted with ornaments, and necklaces of the fourth millennium BC. The site is notable for the remains of its ziggurat. This was a monumental religious complex with a four-level tower of the Mesopotamian ziggurat type. This construction has also been described as "proto-Zoroastrian". Namazga V and Altyndepe were also in contact with the Late Harappan culture (ca. 2000-1600 BC) based in the Indus Valley. Models of two-wheeled carts from c. 3000 BC found at Altyn-Depe are the earliest complete evidence of wheeled transport in Central Asia.
The views expressed herein can in no way be taken to reflect the official opinion of the European Space Agency or the European Union.
Contains modified Copernicus Sentinel data 2023, processed by VisioTerra.