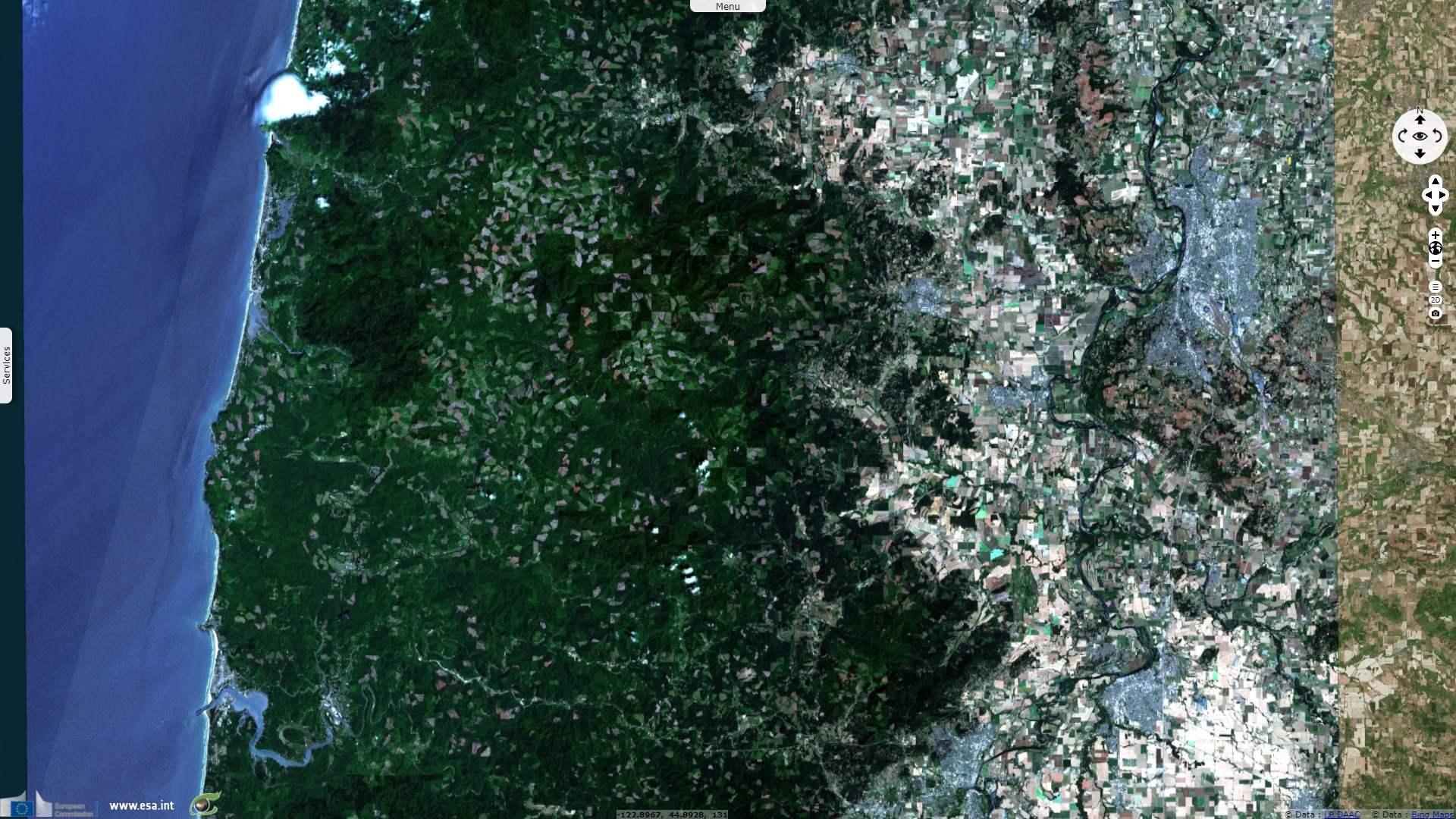 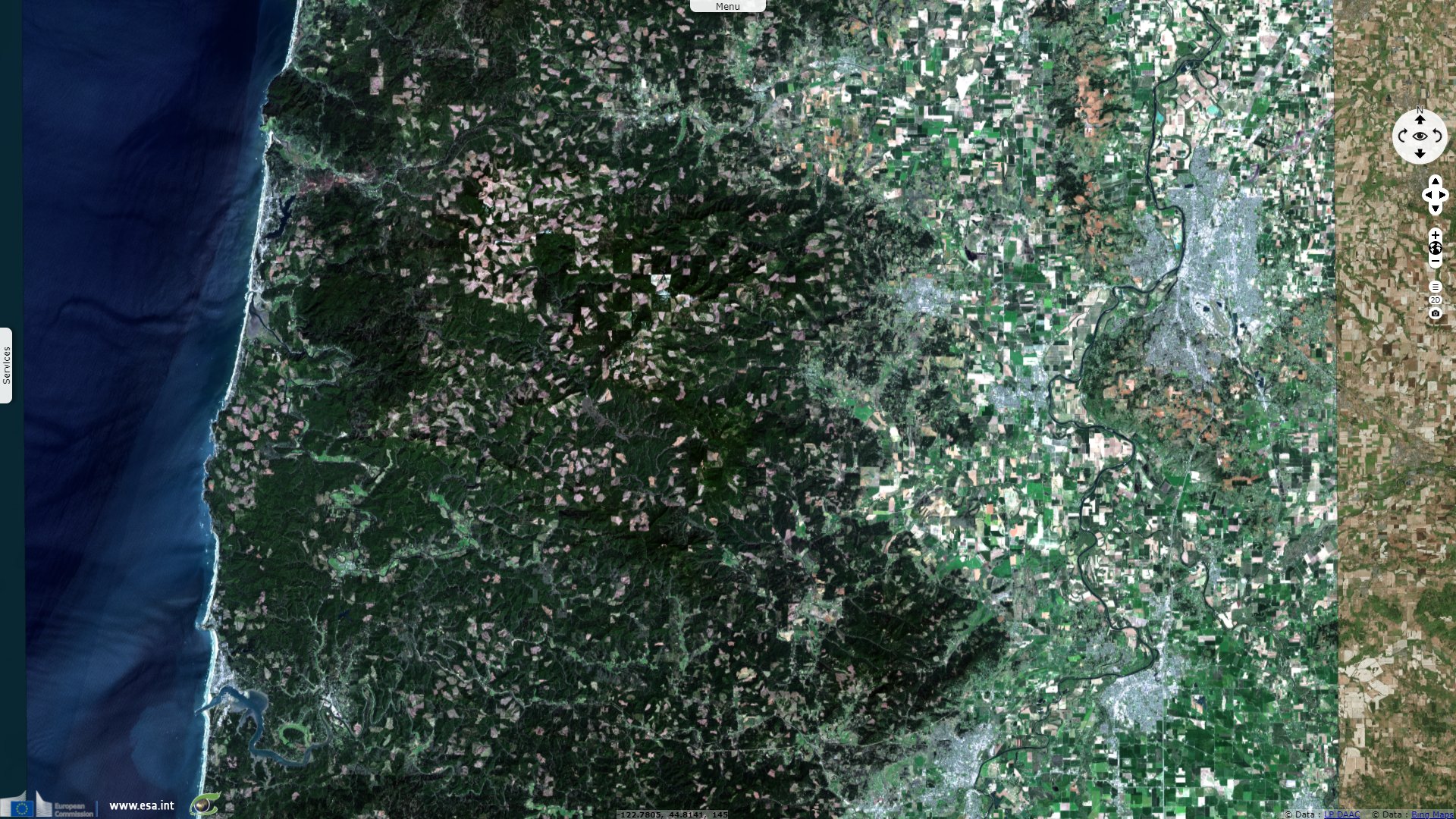 The controversial practice of clear-cutting fells and removes all the trees from a tract of forested land. It is practiced on a large scale by lumber and logging companies. A clearcut is distinguished from selective logging where typically only a few trees per hectare are harvested in proportions dictated by management objectives.
Fig. 3 - S2 (30.06.2016) - Further south, the city of Eugene is visible at south-east.
3D view 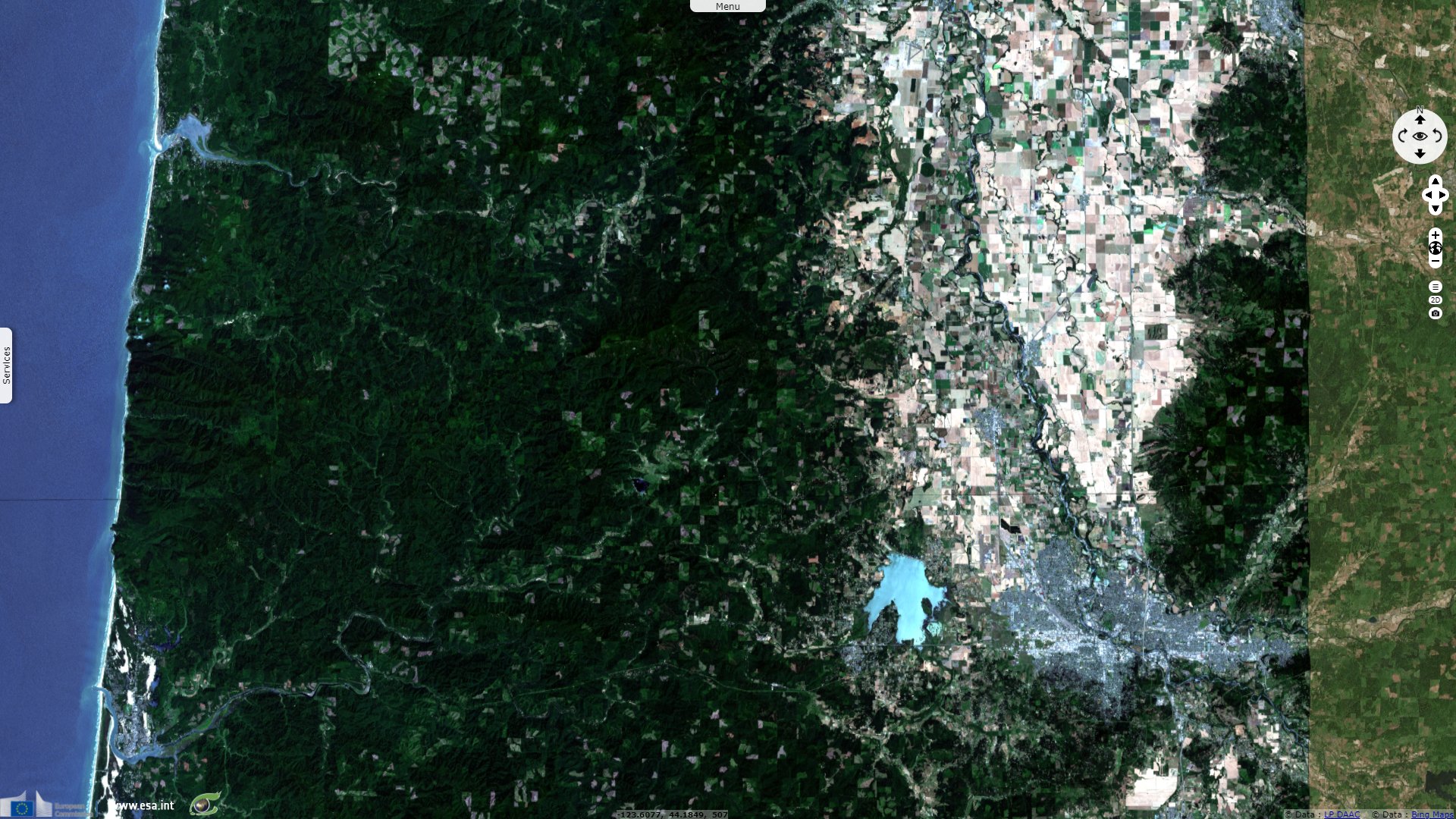 Clearcutting is easier to manage for the land owner. It allows replacing a diverse forest by a single very productive specie of trees of the same age, regularly spaced for optimal growth. When the trees are mature, the whole patch is harvested at once by fully mechanized means. In between, there is a rotation with other patches so that there is one of several patches are exploited each year.
Fig. 4 - S2 (15.04.2021) - Checkboard patterns are visible west of the Willamette river valley.
3D view 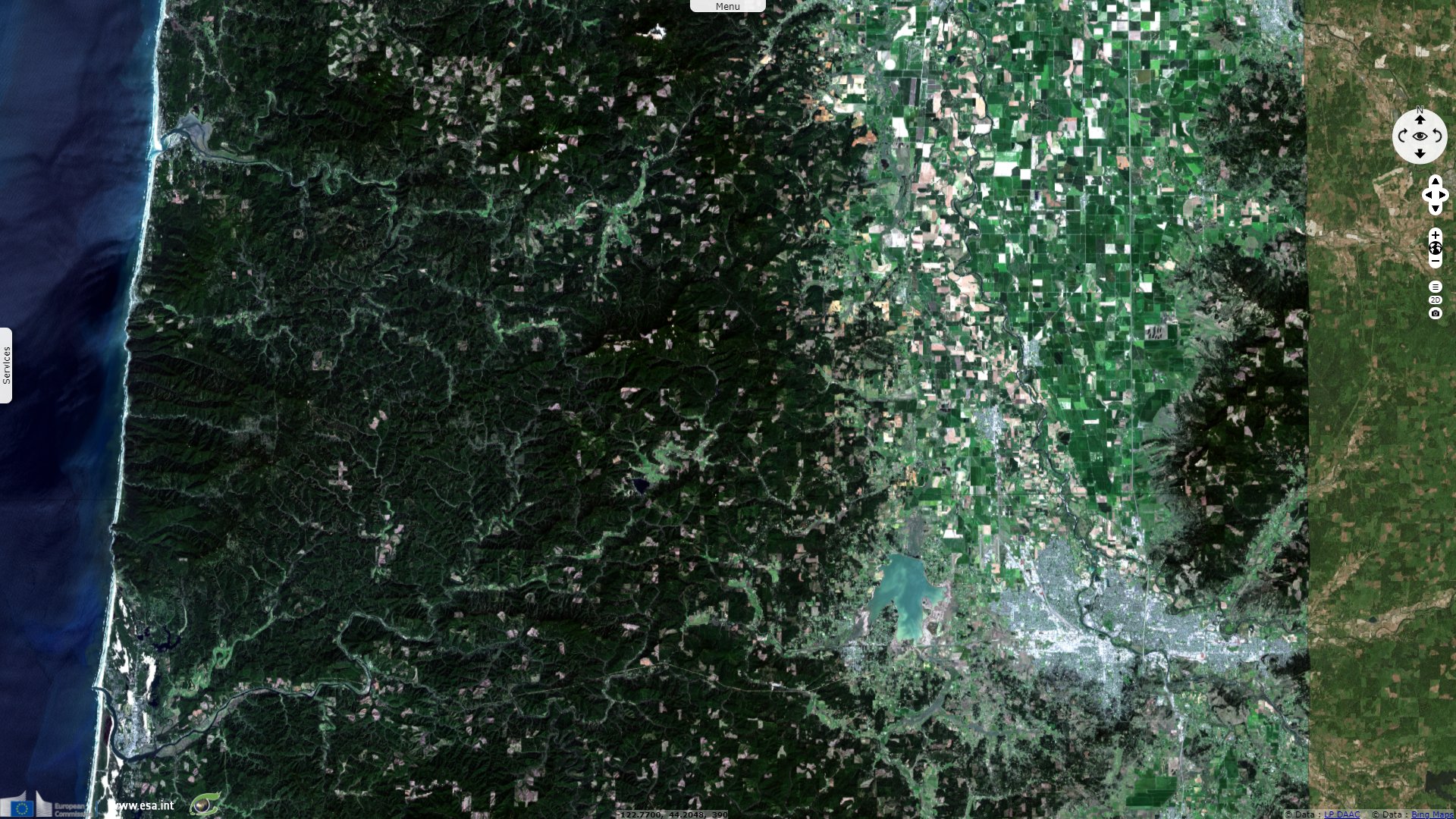 However it has many drawbacks compared to selective logging. Clearcutting can destroy an area's ecological integrity in a number of ways, including: the destruction of buffer zones which reduce the severity of flooding by absorbing and holding water; the immediate removal of forest canopy, which destroys the habitat for many rainforest-dependent insects and bacteria; the removal of underground worms, fungi and bacteria that condition soil and protect plants growing in it from disease; the removal of forest carbon sinks, leading to global warming through the increased human-induced and natural carbon dioxide build-up in the atmosphere; the destruction of aesthetic values and recreational opportunities.
Fig. 5 - S2 (30.06.2016) - Closer to California, in the central Oregon coast range.
3D view 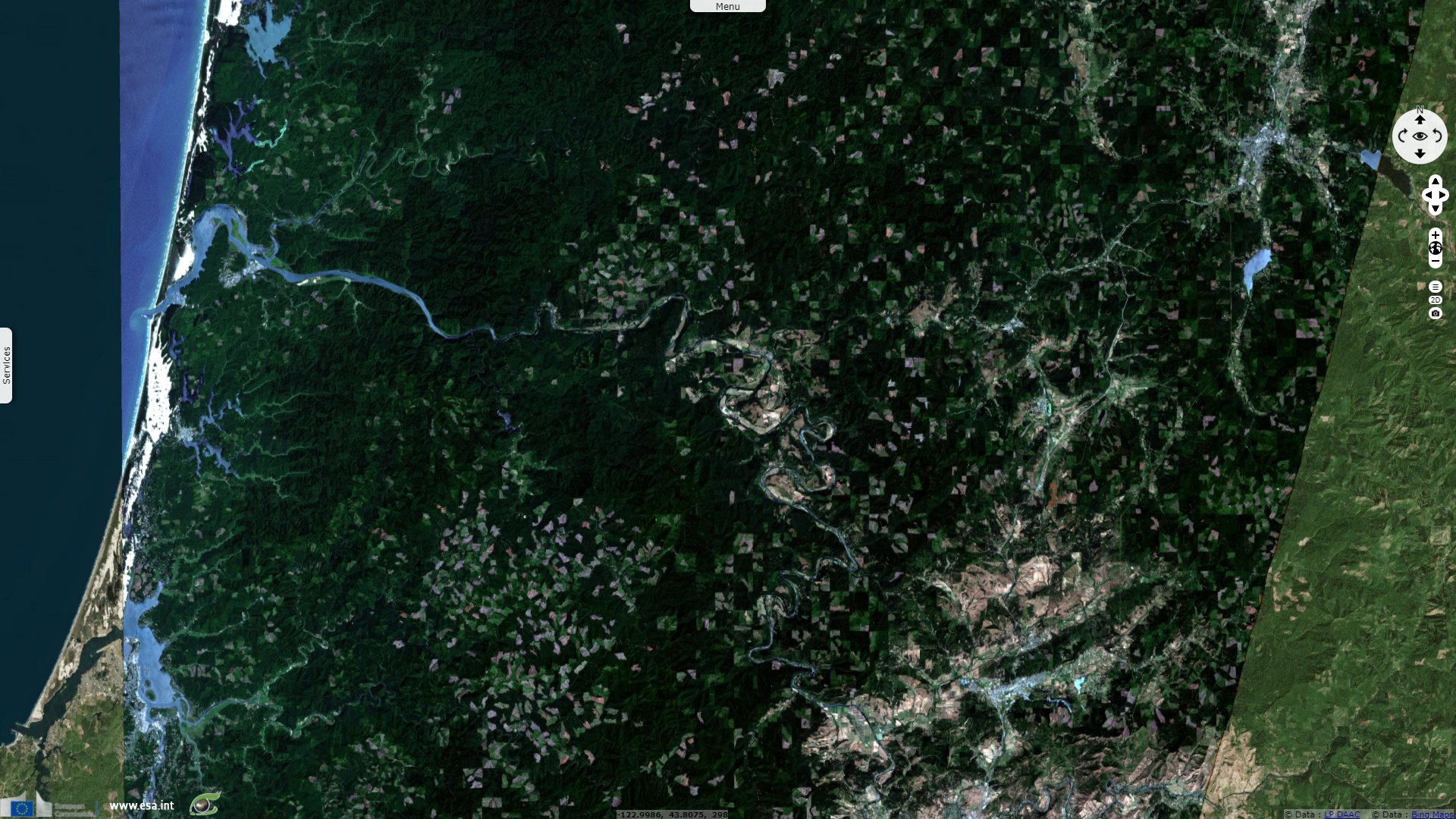 Phil Whitmer details some of the adverse impacts in his article: Negative Effects of Clear-Cutting, published on sciencing.com: "A forest biome is a balanced and interwoven set of ecosystems. The community of trees, plants, animals, insects, fungi and lichen all work together to increase one another's chance of survival. This finely tuned ecological niche is disrupted by clear-cutting. Removal of the forest canopy negatively affects the other ecological zones. The umbrella-like canopy regulates the amount of wind and sunlight the forest floor receives. The disruption of the forest's uppermost protective layer upsets the biome's microclimate."
Fig. 6 - S2 (15.04.2021) - More bare soil is visible in 2021 than there was in 2016.
3D view 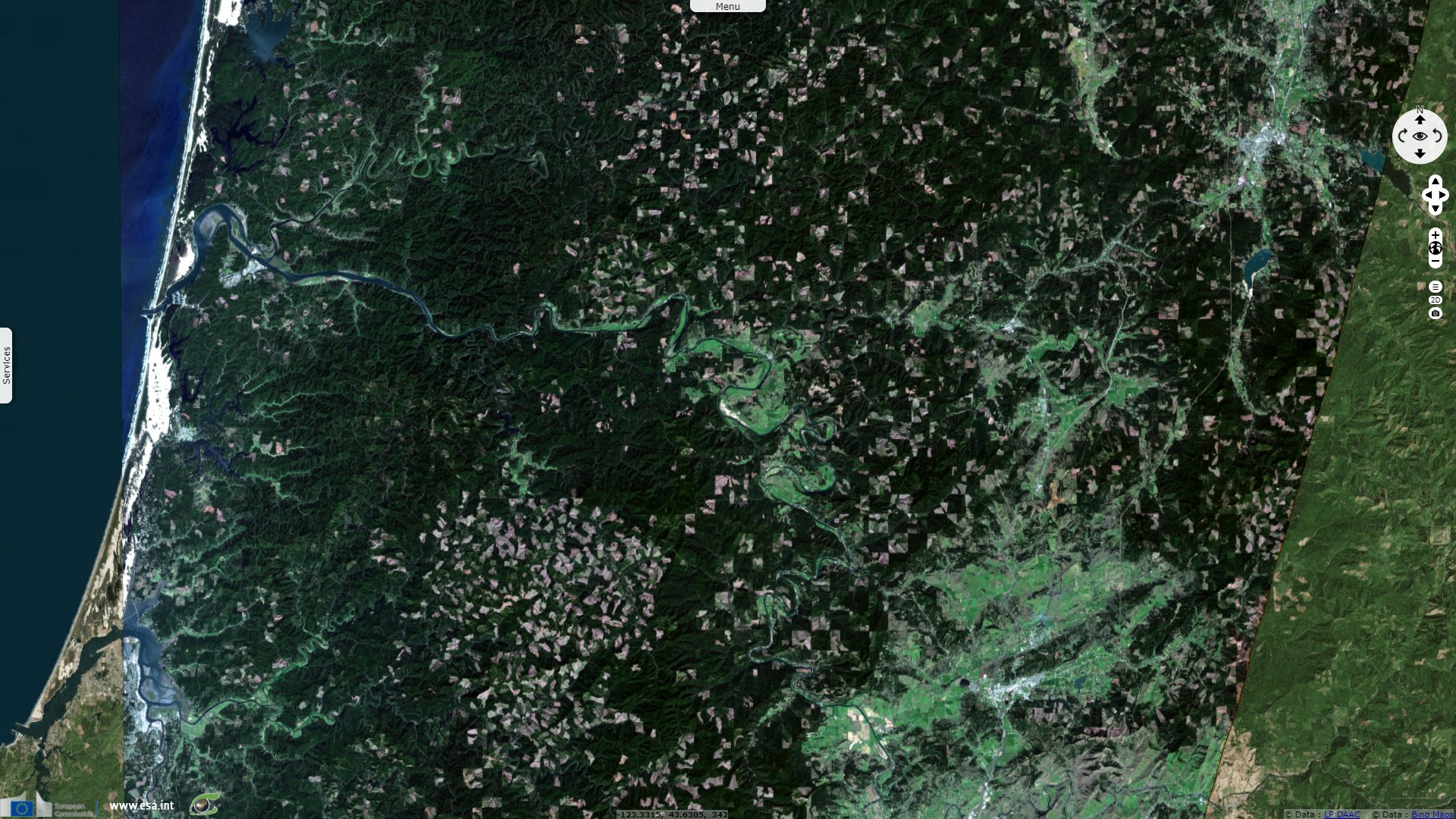 "Removal of all the trees from an area destroys the physical habitats of many species of wildlife. The most famous is the northern spotted owl. The bird is one of many that nest and live in dense forests. Woodpeckers, hawks, bats and flying squirrels are some of the forest fauna that lose their homes and hunting grounds as a result of clear-cutting. The diversity of animal species is decreased by the removal of mature trees."
Fig. 7 - S1 (15.08.2017 & 23.08.2020) - This multidate composite shows logged areas in green and increase in tree cover in purple.
3D view 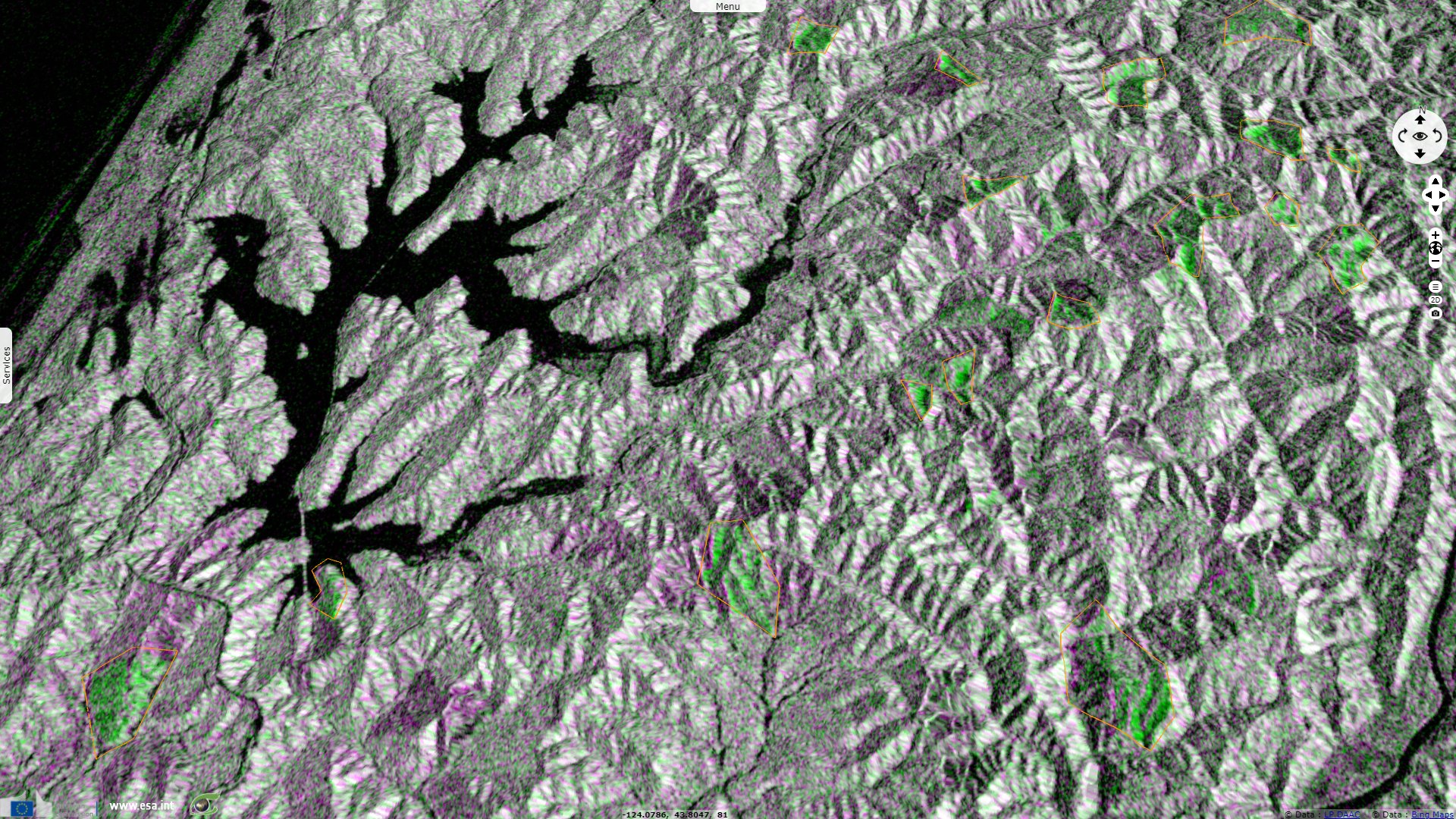 "Mass removal of trees increases the soil erosion by water runoff.". A study from the University of Oregon found that in certain zones, areas that were clear cut had nearly three times the amount of erosion due to slides. When the roads required by the clearcutting were factored in, the increase in slide activity appeared to be about 5 times greater compared to nearby forested areas.
Fig. 8 - S1 (15.08.2017) - Area near Reedsport, Oregon.
3D view 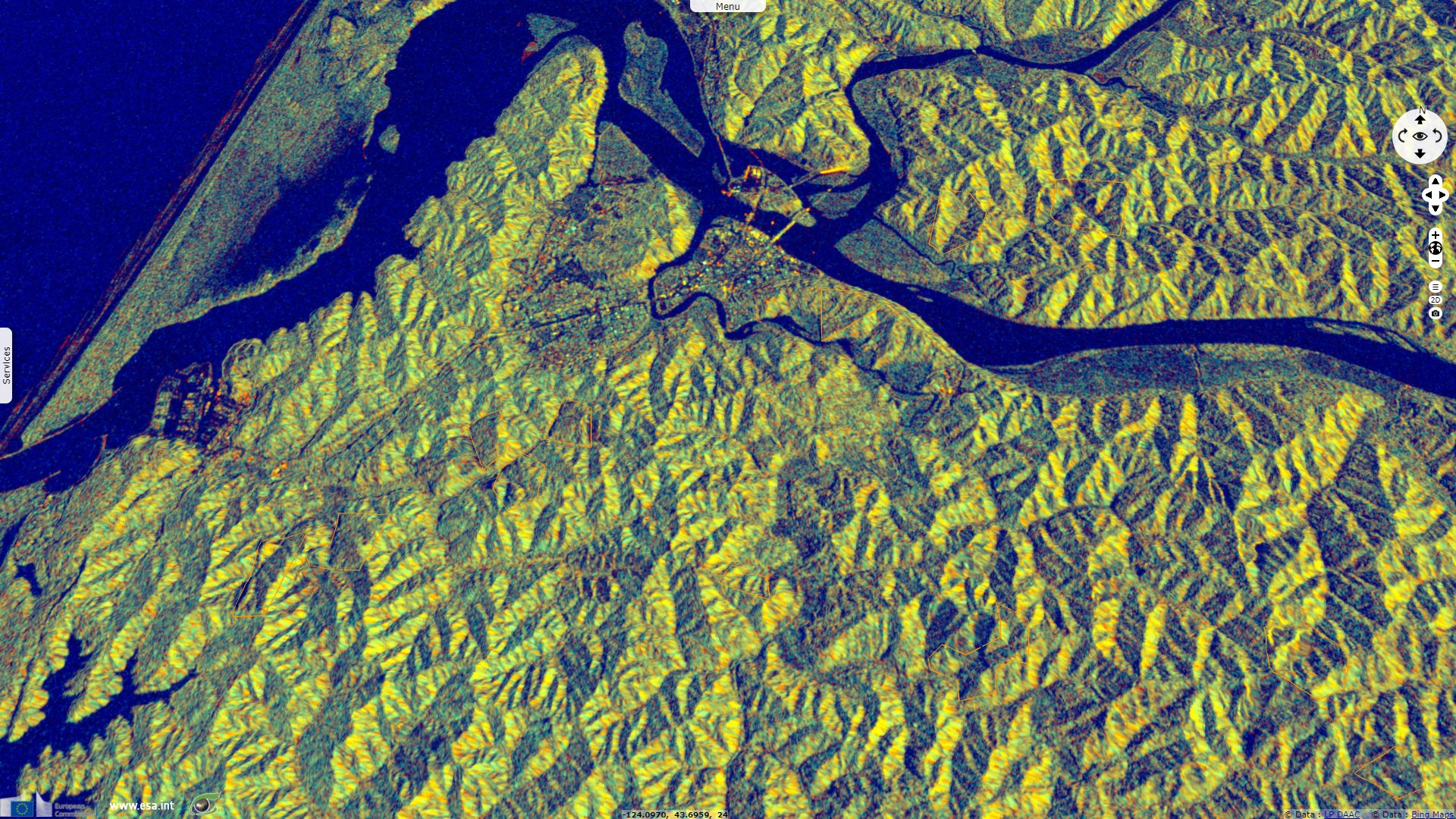 "Excessive runoff muddies waterways and harms aquatic life. Removal of trees shading streams raises the water temperature and lowers its oxygen levels to the detriment of fish and other aquatic fauna. The soil decreases in quality once the falling leaves that provide nutrient-rich humus are gone. Building roads and operating heavy equipment in the woods compacts the soil, harming the habitat of dirt-dwelling organisms."
Fig. 9 - S1 (23.08.2020) - Areas that have become darker three years later have been exploited.
3D view 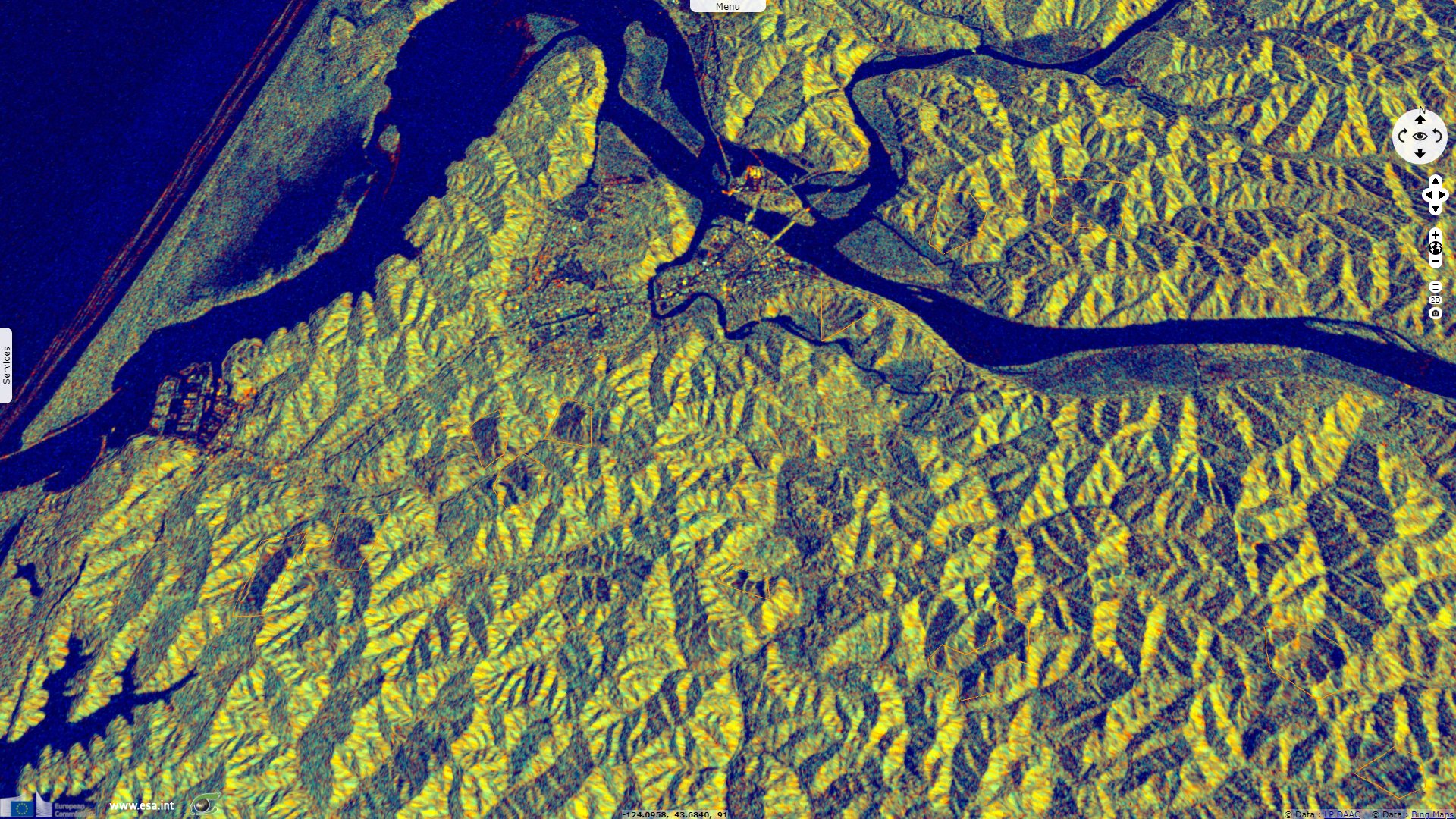 Because the trees no longer hold down the soil, riverbanks increasingly erode as sediment into the water, creating excess nutrients which exacerbate the changes in the river and create problems miles away, in the sea. All of the extra sediment and nutrients that leach into the streams cause the acidity of the stream to increase, which can kill marine life if the increase is great enough.
Fig. 10 - S1 (15.08.2017 & 23.08.2020) - Logged patches between Lakeside and North Bend show in green.
3D view 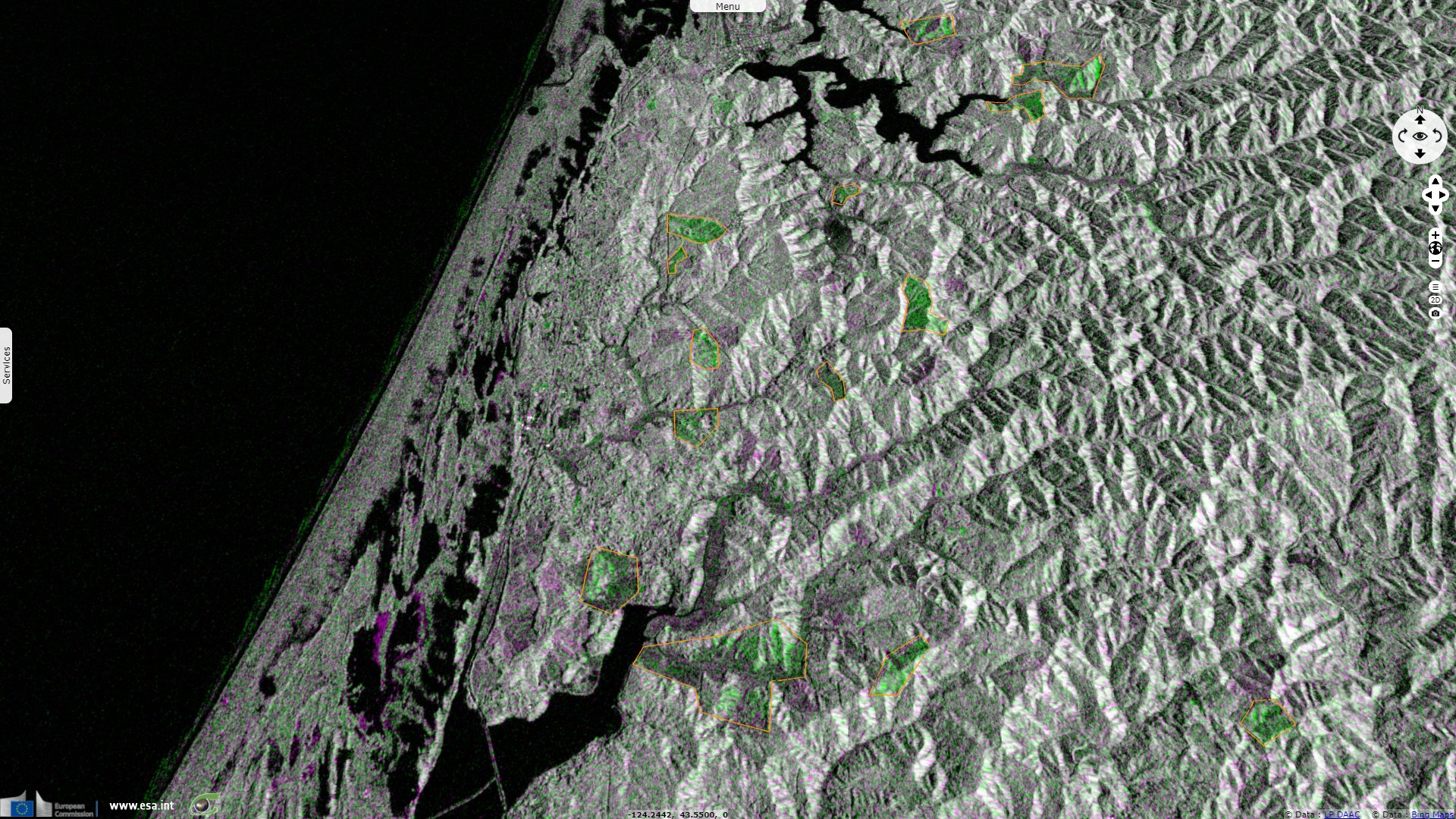