Fig. 1 - S1 (14.11.2022) - Southern United States was affected by multiple tornadoes near the limits between Texas, Oklahoma and Arkansas.
2D view 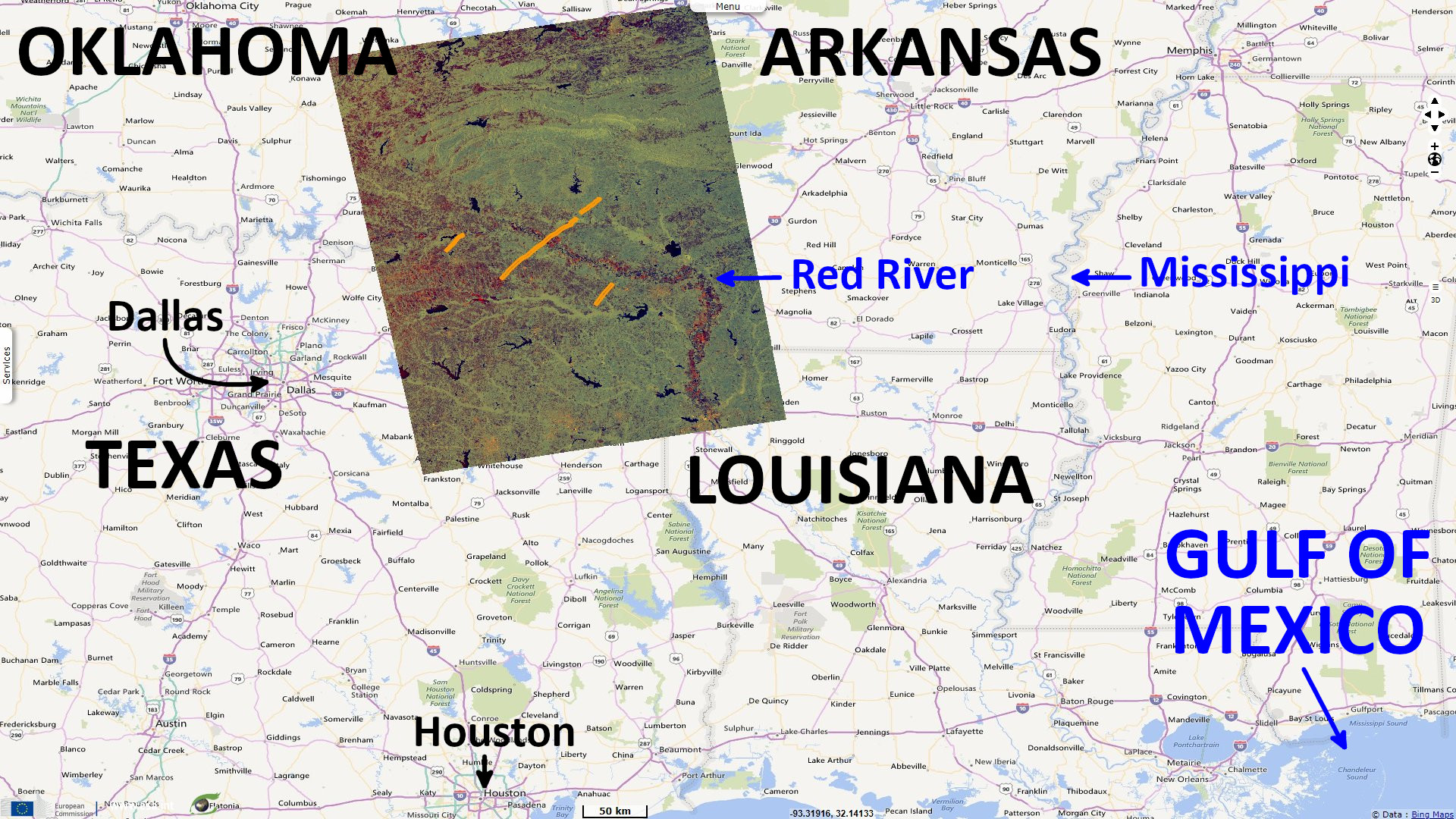 Gloria Oladipo reported for the Guardian a tornado outbreak wreaked devastation in Southern United States: "Several twisters caused property damage and physical injury across the various states on 04 and 05 November 2022." "The destruction followed a line of storms which dropped rain and sporadic hail on the Dallas-Fort Worth area before continuing to push eastward."
Fig. 2 - S2 (02.11.2022) - View of the area 10 days before the tornado outbreak.
2D view 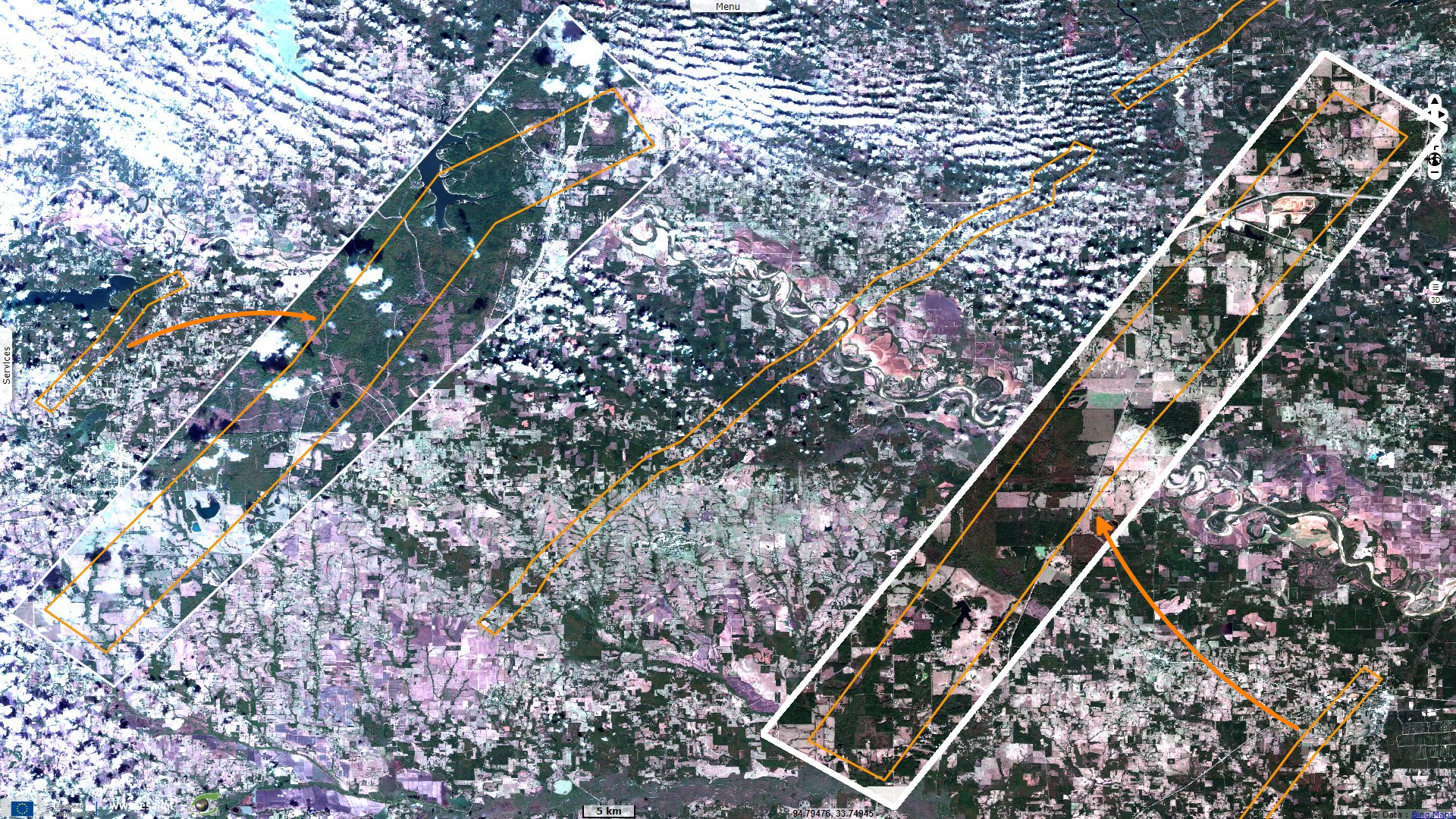 "At least two people have died and dozens more are injured after tornadoes ravaged parts of Texas, Arkansas and Oklahoma." "More than 60 homes were destroyed and 100 houses “affected” by the fit of extreme weather, officials told local media. 'There was total destruction on the south and east sides of Idabel,' a local emergency management coordinator, Steven Carter, said to the Texarkana Gazette."
Fig. 3 - S2 (12.11.2022) - The path of the most violent twisters leaves brownish bare soil where there used to be vegetation
2D view 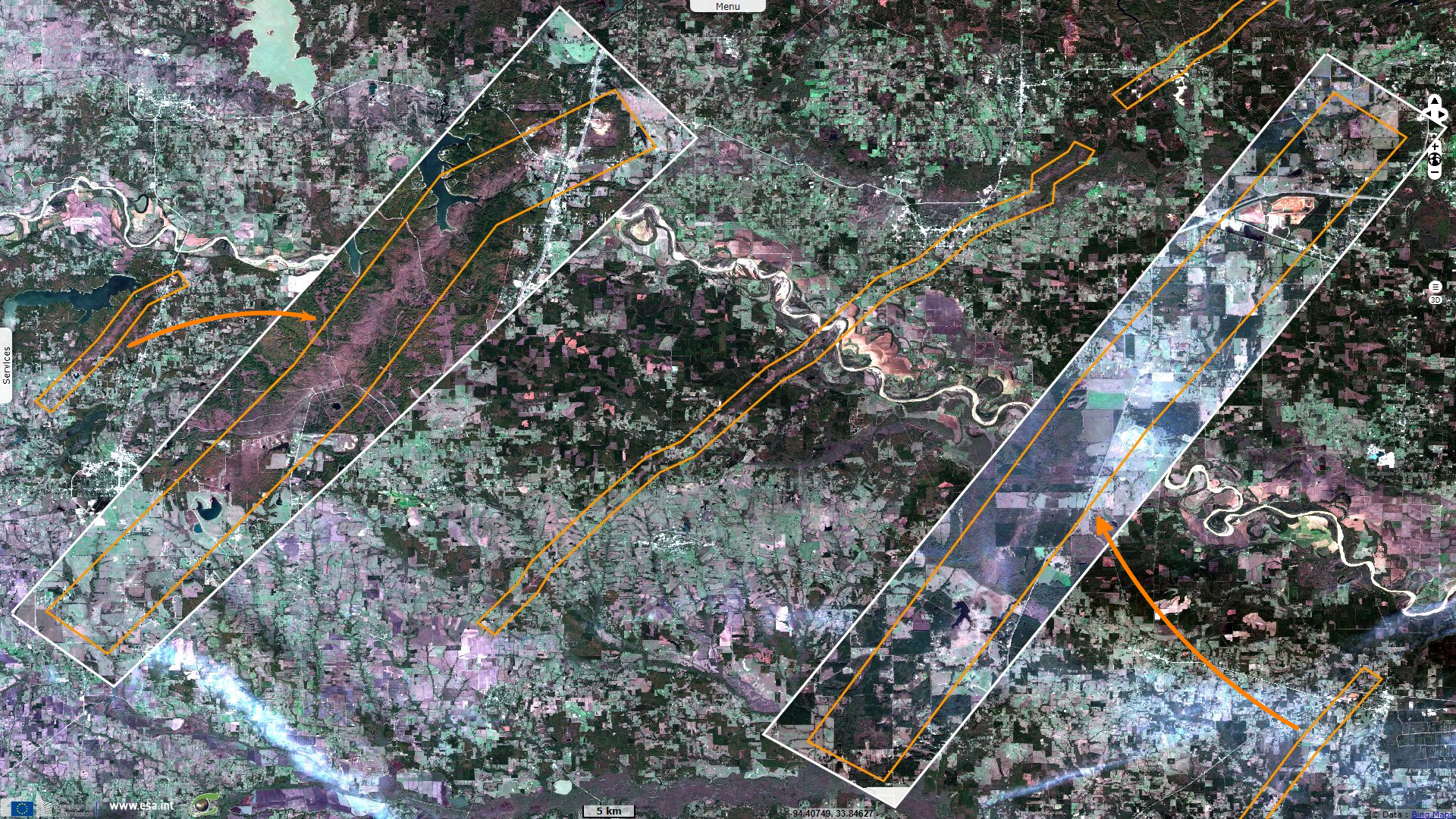 "While springtime usually marks the peak of severe weather season for the region including Texas, Arkansas and Oklahoma, tornadoes do occasionally develop in October, November, December and even January, said weather service meteorologist Bianca Garcia in Fort Worth. Garcia said such storms are 'not very common', 'But it does happen across our region,' she added."
Fig. 4 - S2 (02 & 12.11.2022) - Multidate composite showing all tornadoes move from southwest to northeast, the usual direction of US tornadoes.
2D view 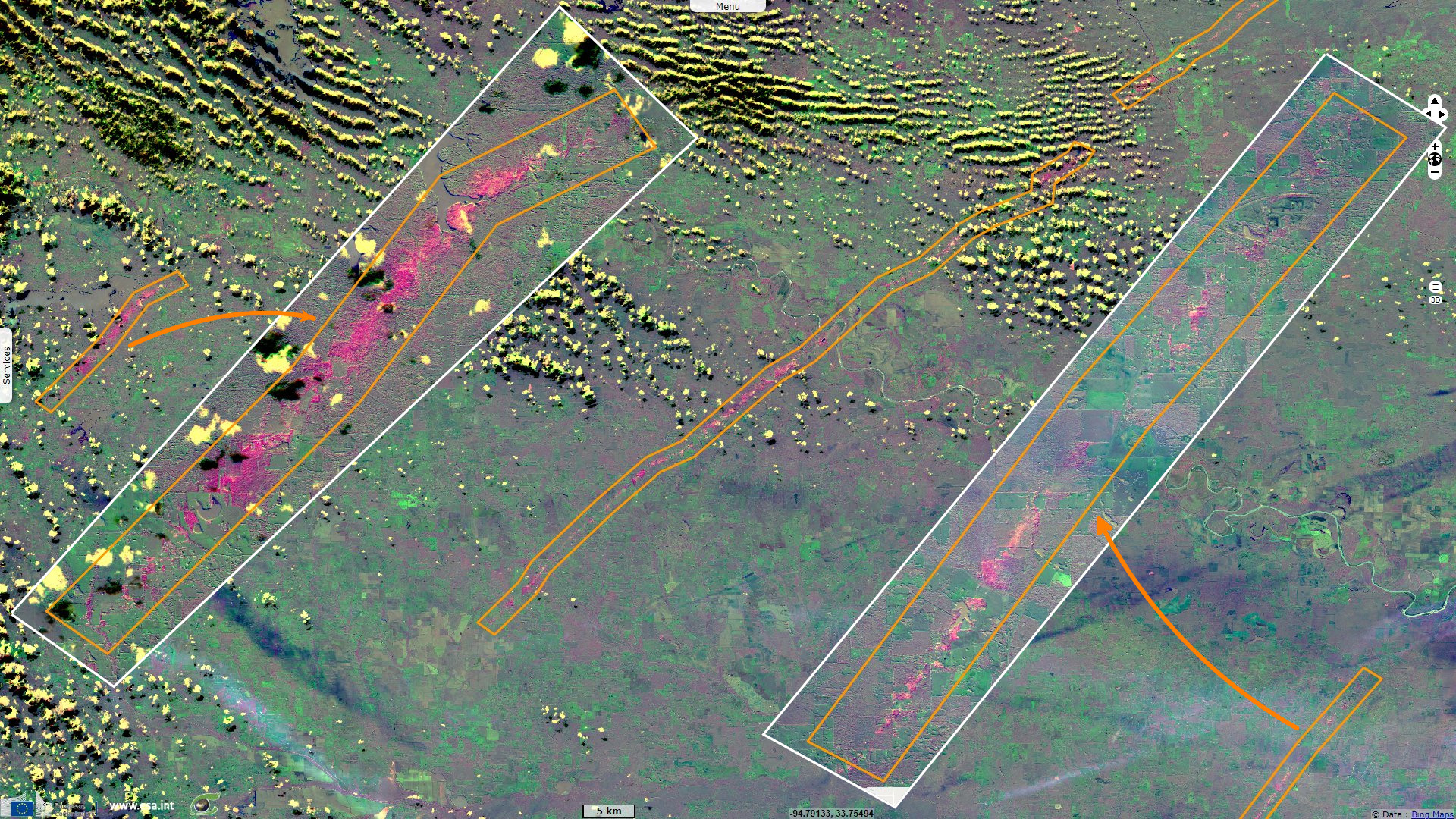 The US National Oceanic and Atmospheric Administration (NOAA) explains the cause of tornadoes as follows: "The most destructive and deadly tornadoes occur from supercells--which are rotating thunderstorms with a well-defined radar circulation called a mesocyclone. [Supercells can also produce damaging hail, severe non-tornadic winds, unusually frequent lightning, and flash floods.] Tornado formation is believed to be dictated mainly by things which happen on the storm scale, in and around the mesocyclone."
Fig. 5 - S1 (14.11.2022) - This image acquired after the event shows the parallel trails are also visible.
2D view 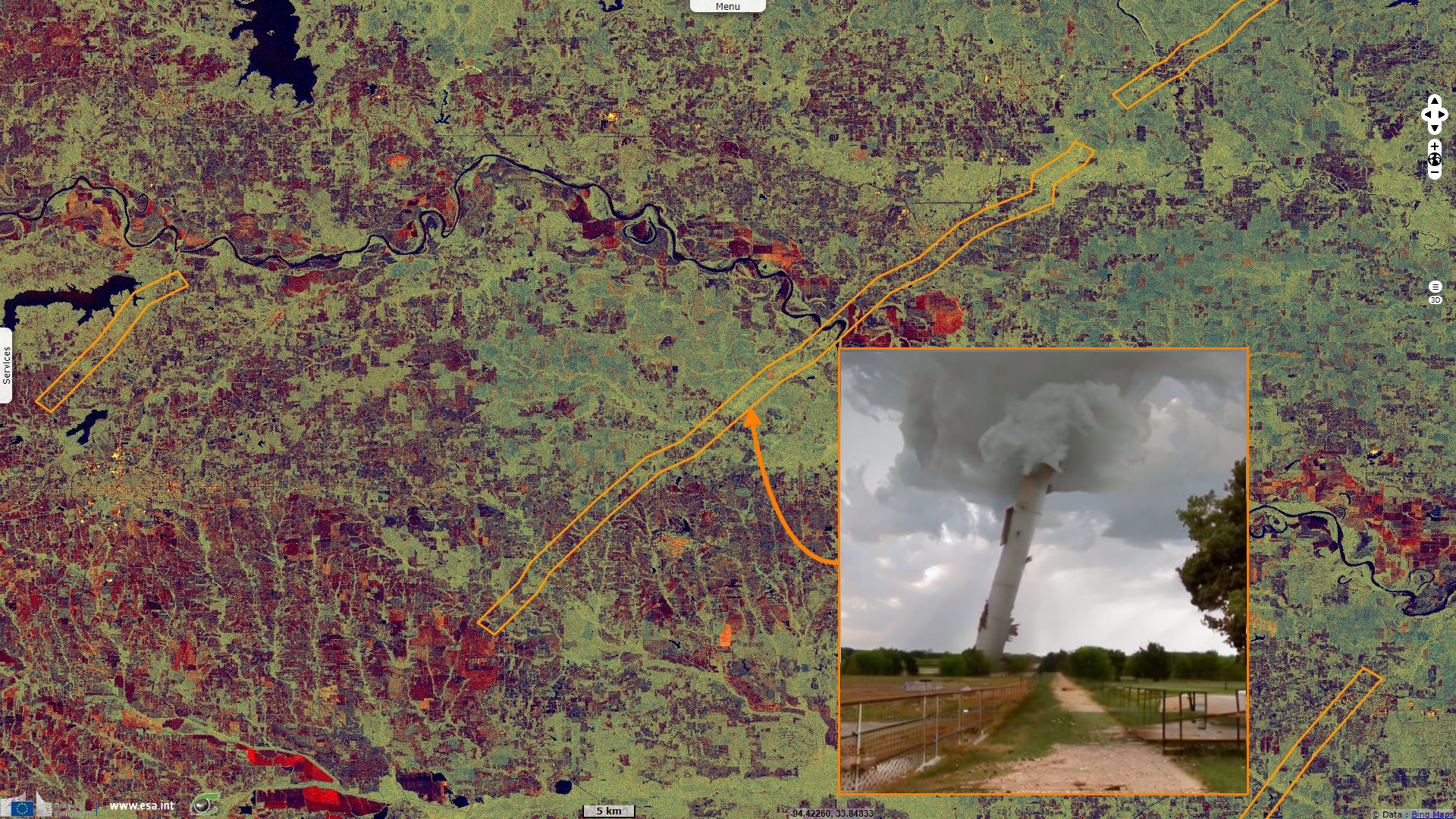 "Recent theories and results from the VORTEX programs suggest that once a mesocyclone is underway, tornado development is related to temperature changes across the edge of downdraft air wrapping around the mesocyclone (the occlusion downdraft). Mathematical modeling studies of tornado formation also indicate that it can happen without such temperature patterns; and in fact, very little temperature variation was observed near some of the most destructive tornadoes in history on 3 May 1999."
Fig. 6 - S1 (02 & 14.11.2022) - This multidate composite better highlights the path with a white linear signature.
2D view 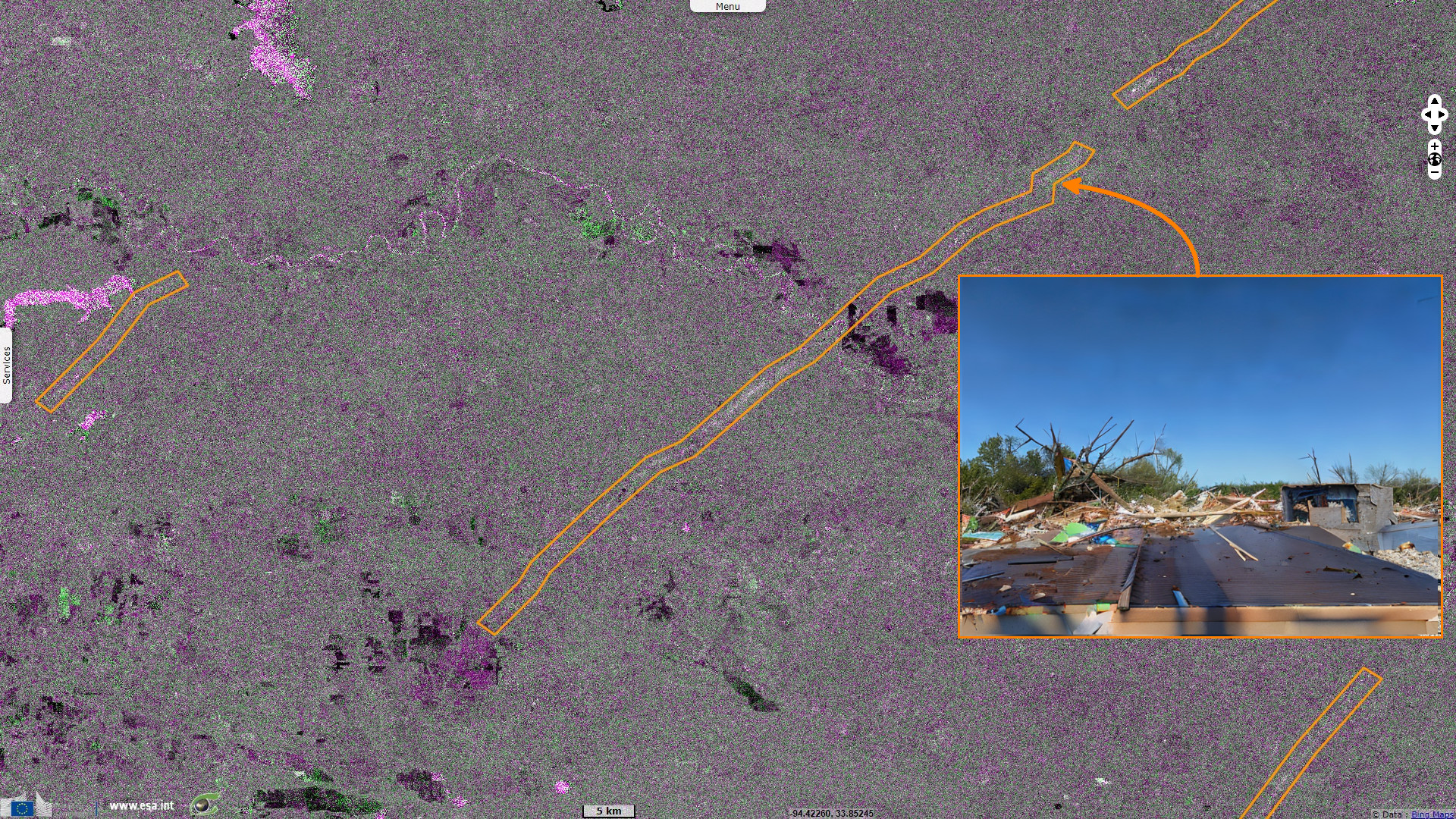 "To oversimplify this a bit, a tornado (or any other atmospheric vortex) is the most efficient way to move air from one part of the atmosphere to another on its size and time scale. In fluid flow (whether gas or liquid), a vortex often forms when some kind of instability exists between one part of the fluid and another, and that difference is strong enough that the fluid needs to relocate mass quickly to restore more stable conditions again."
Fig. 7 - S2 (02.11.2022) - Optical composite more sensitive to vegetation, here before the event.
2D view 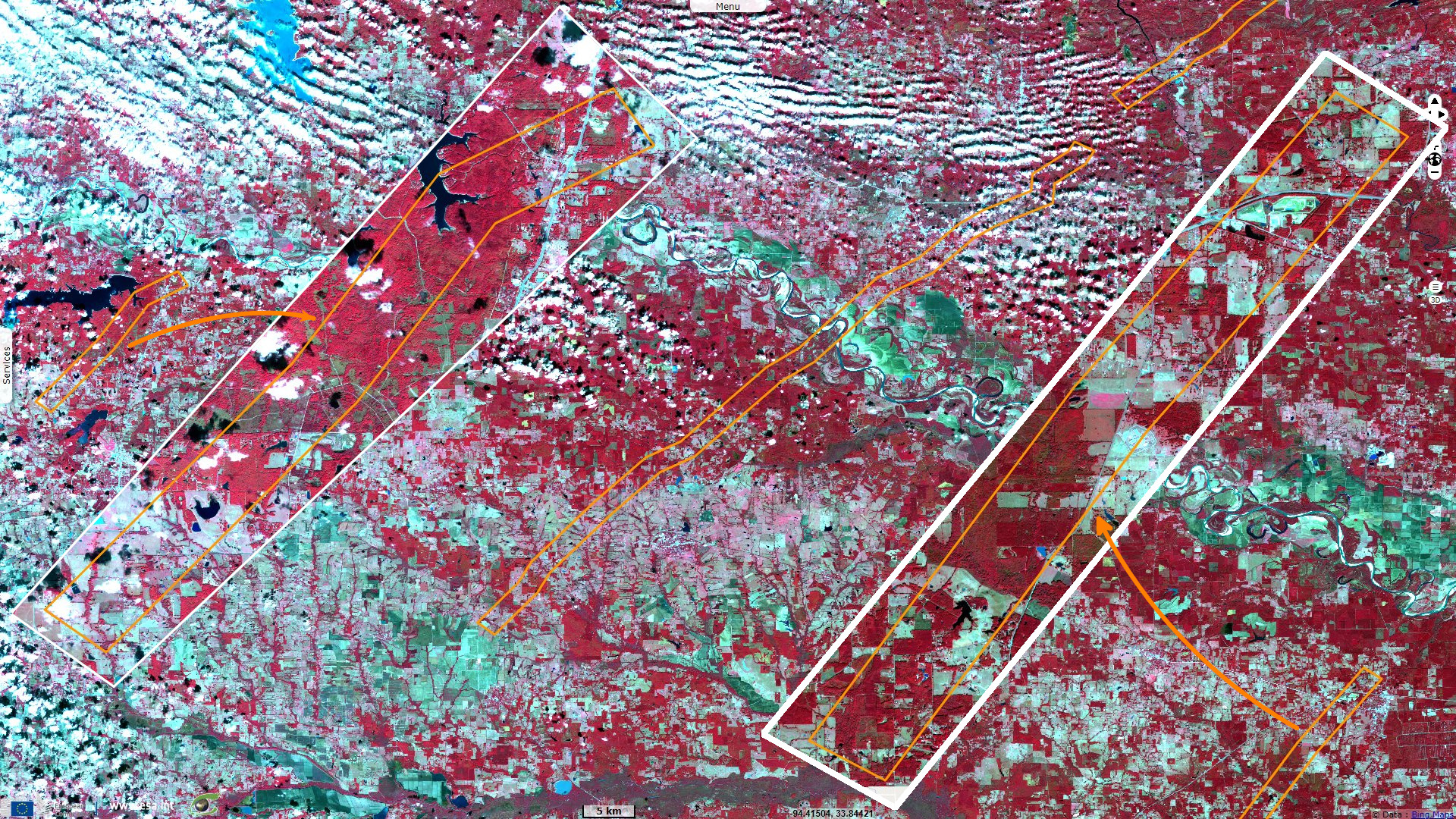 "This happens on many scales, from huge midlatitude cyclones to hurricanes, supercells, tornadsoes and backyard whirlwinds--even the vortex that forms above a bathtub drain. Most thunderstorms apparently do not need a vortex as intense and efficient at moving air as a tornado, to fulfill their own function of transporting a plume of initially unstable air from the lower atmosphere to higher levels. Why some thunderstorms go far enough to require a tornado's assistance is a matter of great speculation and debate in meteorology."
Fig. 8 - S2 (12.11.2022) - The near infrared reflectance, indicative of vegetation, has been greatly reduced in the damaged areas.
2D view 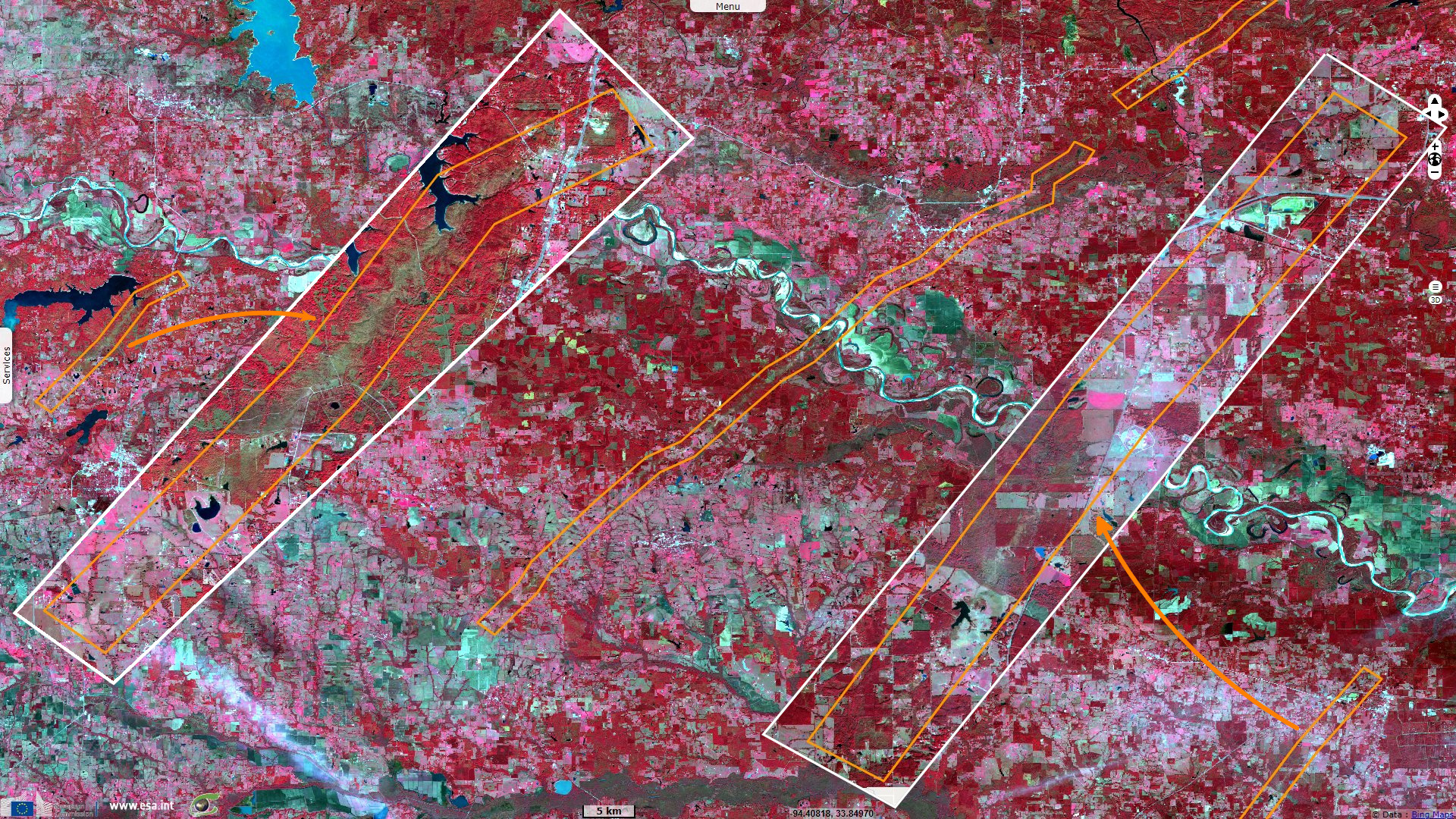 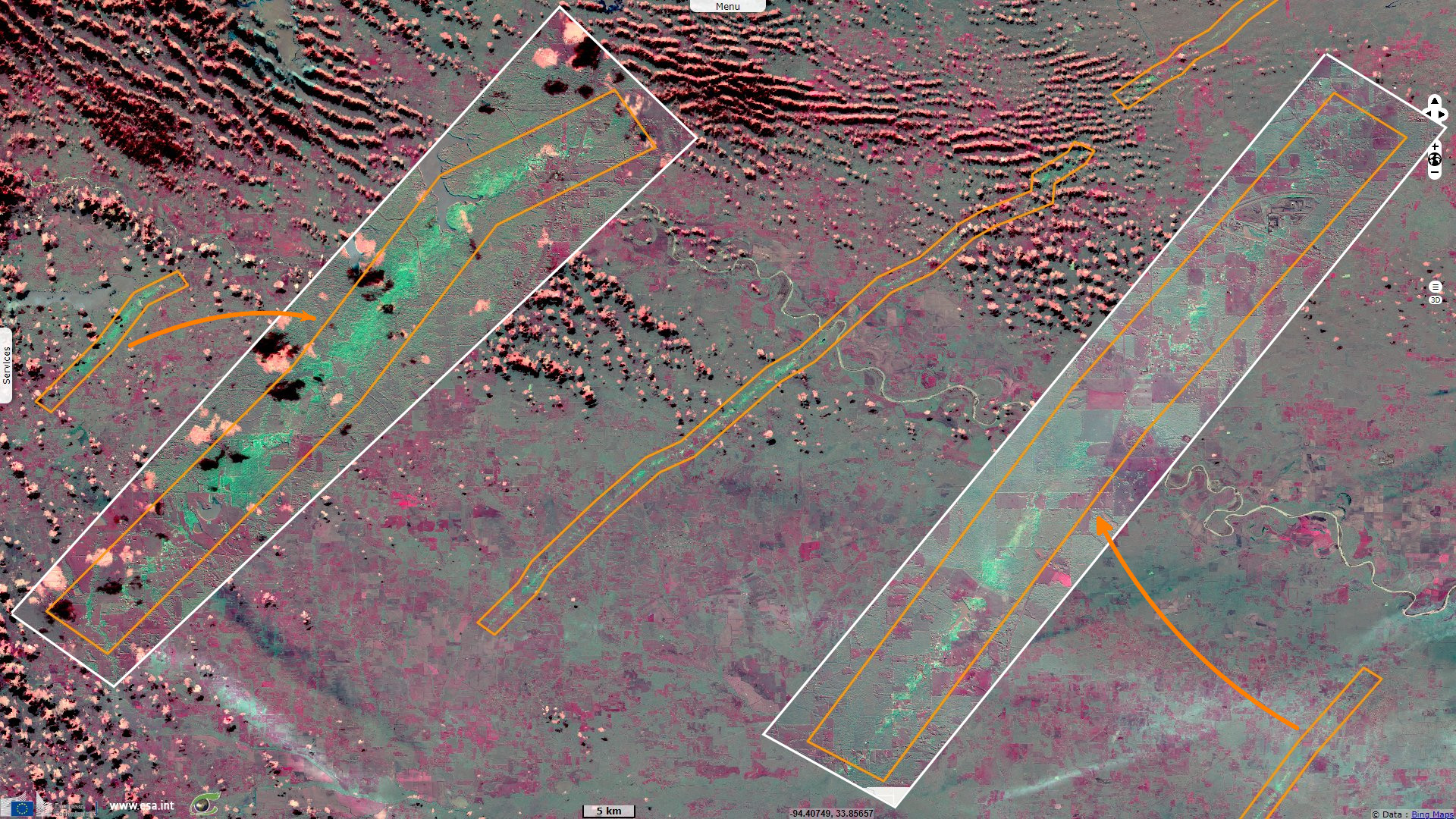 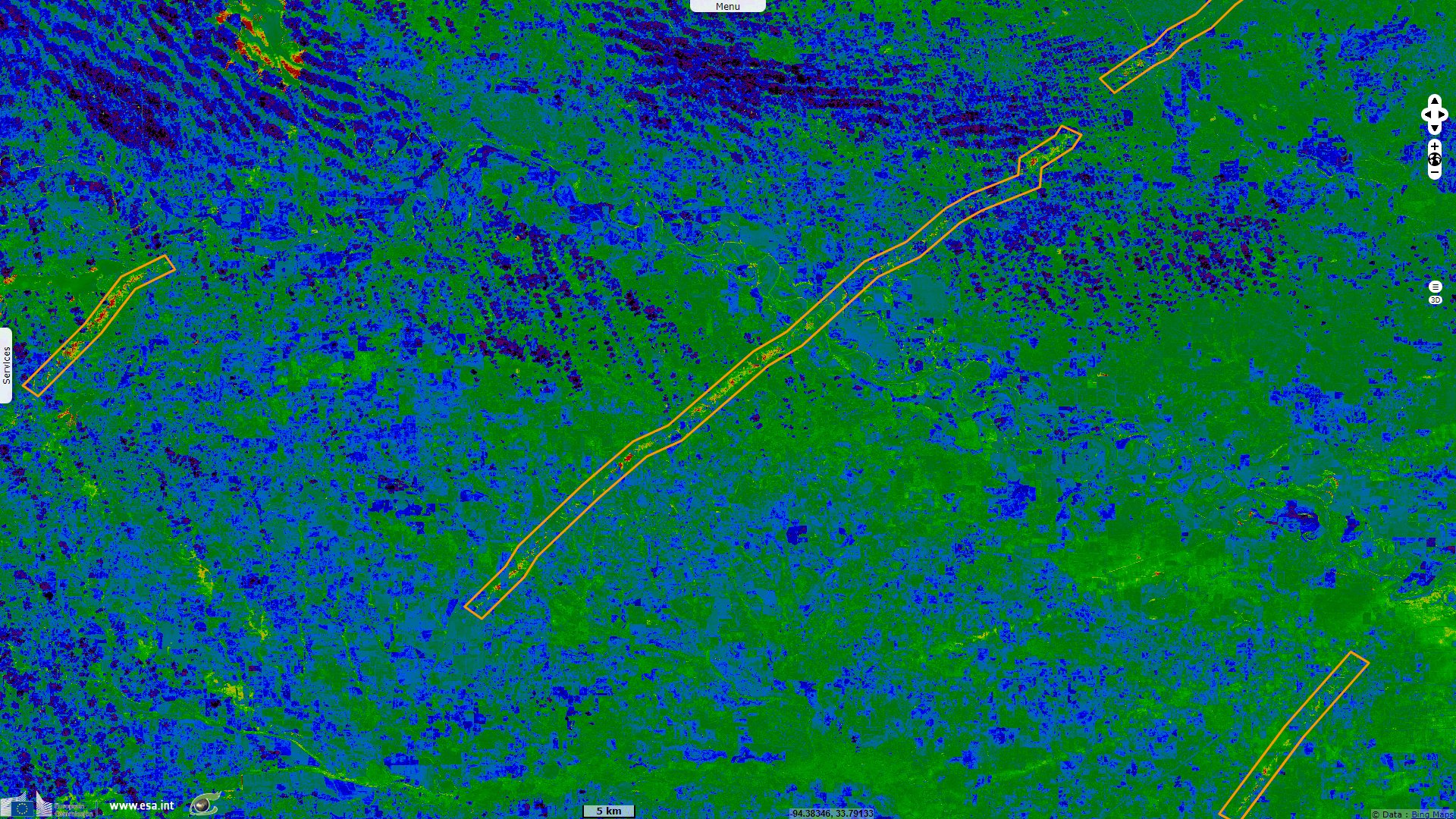 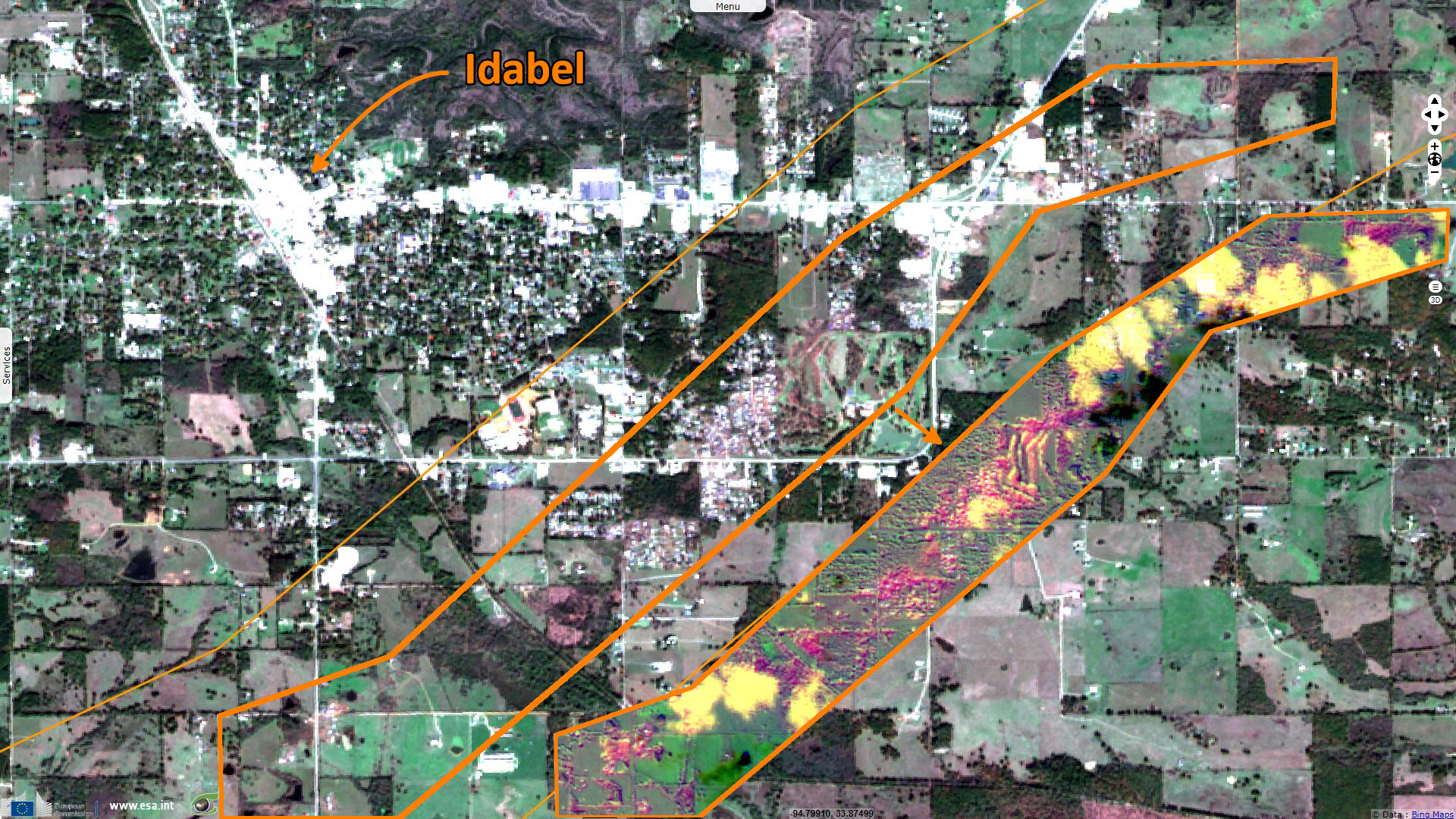 The views expressed herein can in no way be taken to reflect the official opinion of the European Space Agency or the European Union.
Contains modified Copernicus Sentinel data 2023, processed by VisioTerra.