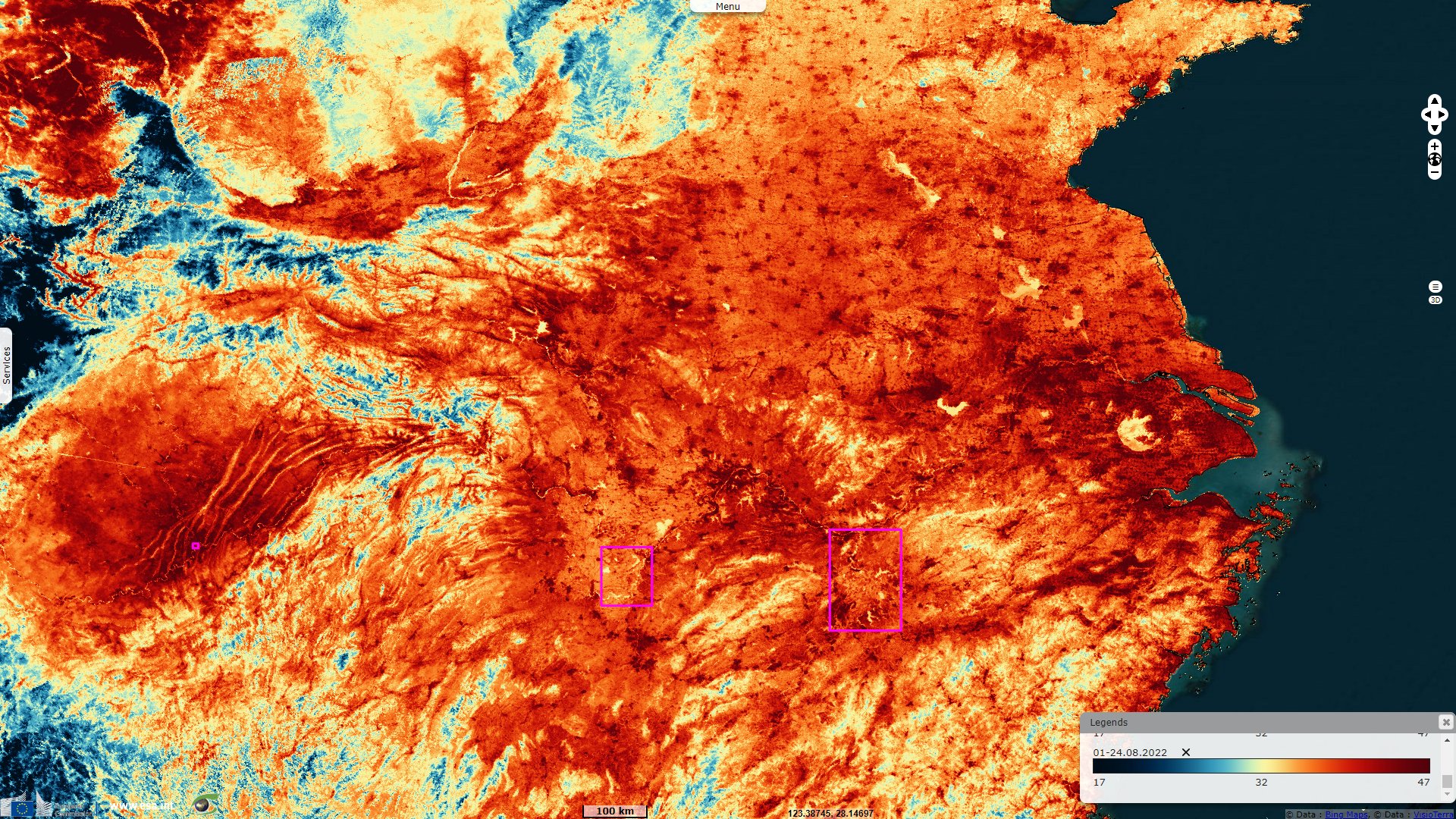 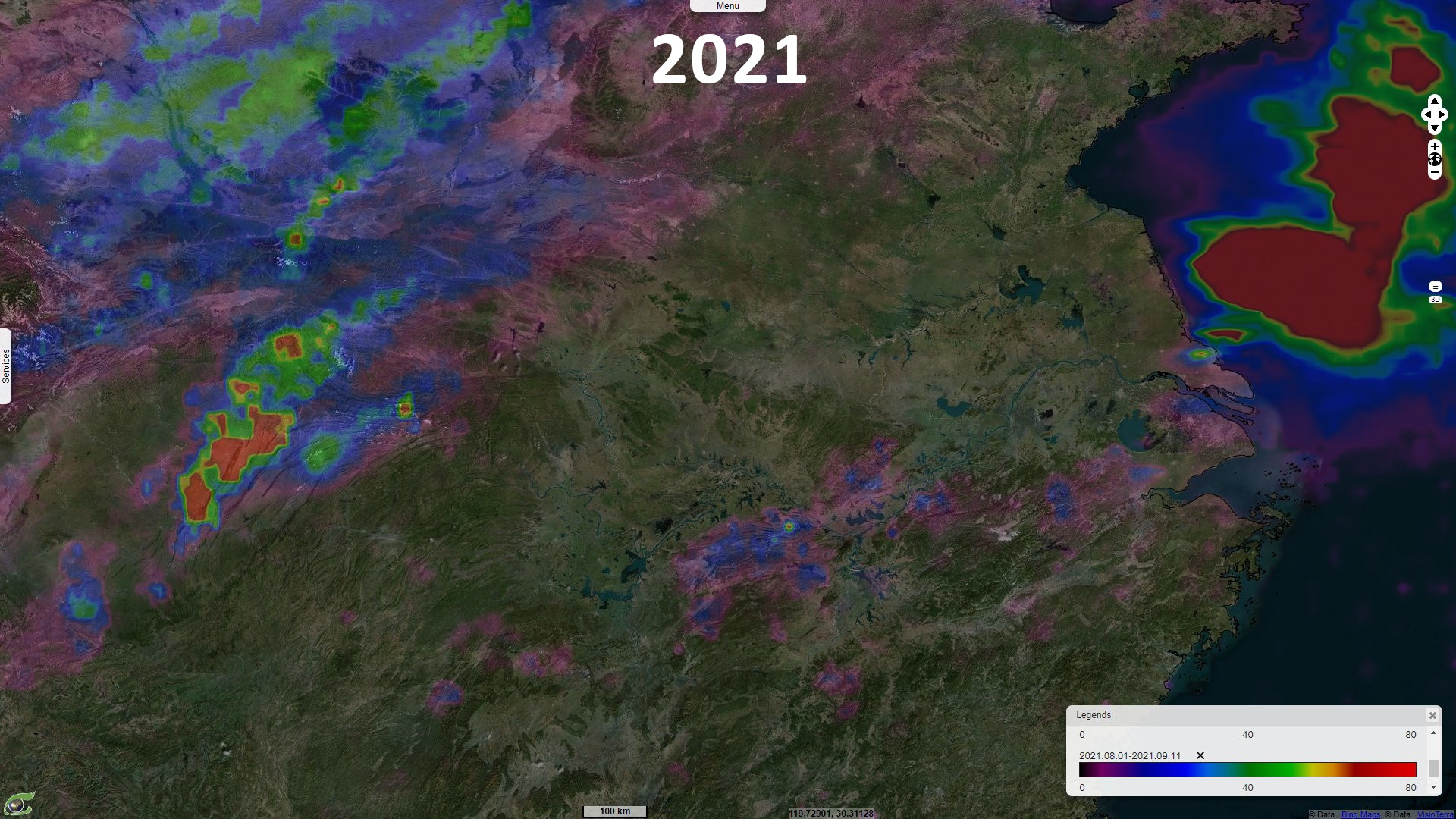 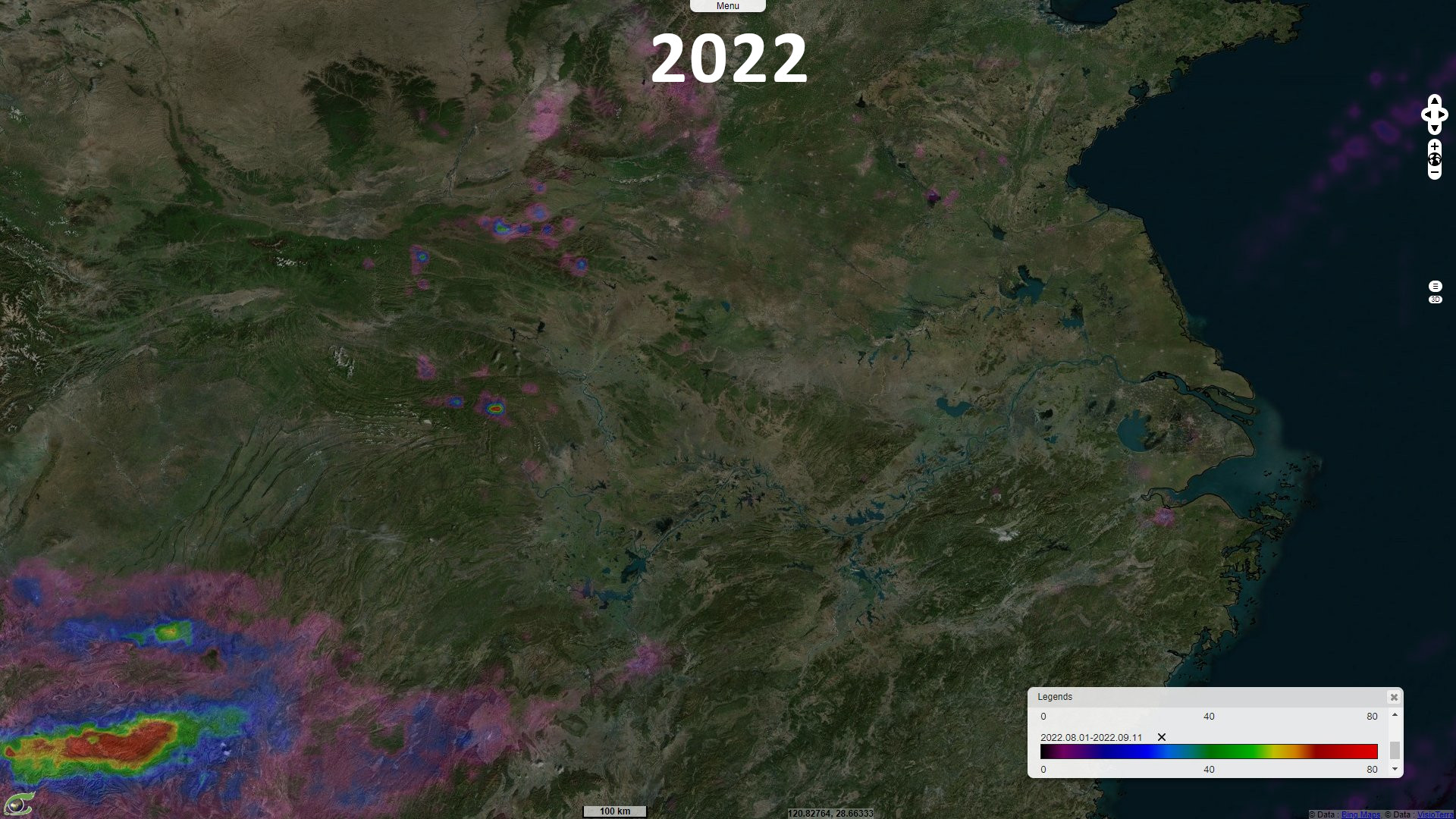 China has seen its worst drought during August 2022 and issued its first national drought alert, as reported by Reuters: "The Ministry of Water Resources has instructed drought-stricken agricultural regions to draw up arrangements that determine who can access supplies at a particular time to ensure they do not run out. According to data from China’s Ministry of Emergency Situations late Thursday, high temperatures in July alone caused direct economic losses of 2.73 billion yuan ($580 million), affecting 5.5 million people."
Fig. 4 - S3 SLSTR (01->24.08.2022) - The drought caused the moisture to drop in this usually wet and warm region.
2D view 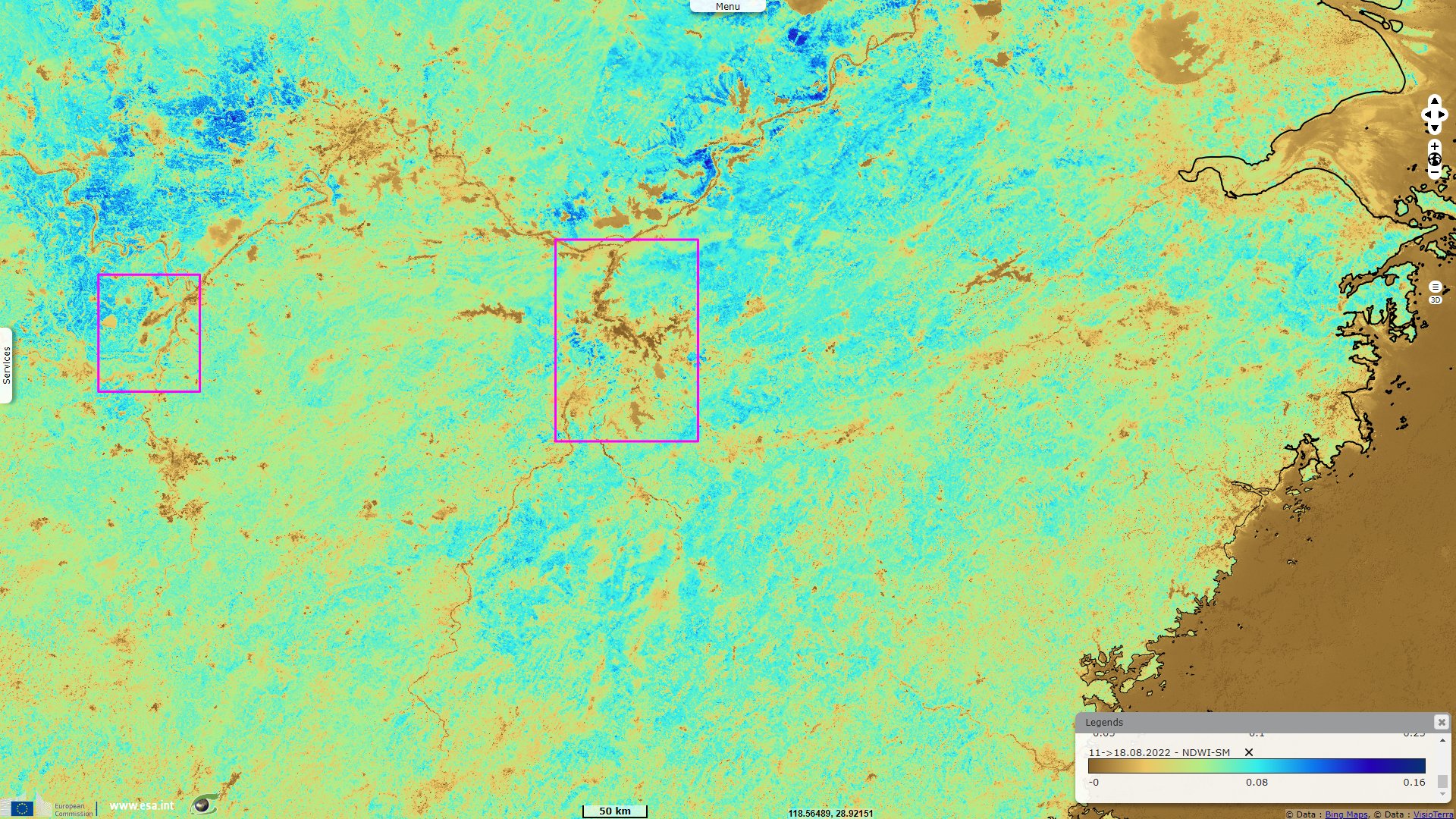 "Meanwhile, China’s National Meteorological Center (NMC) renewed its red high temperature alert [on 16 August], the 30th consecutive day it has issued alerts, it said on its Weibo channel. State forecasters also predicted that the current heat wave would not begin to subside until August 26. The weather bureau said in its daily bulletin that 4.5 million square kilometers of national territory had now experienced temperatures of 35°C or more over the past month – almost half the country’s total area – with more than 200 weather stations recording record highs."
Fig. 5 - S3 SLSTR (11->18.08.2022) - As a result, vegetation has been negatively affected, as shown by the very low vegetation index.
2D view 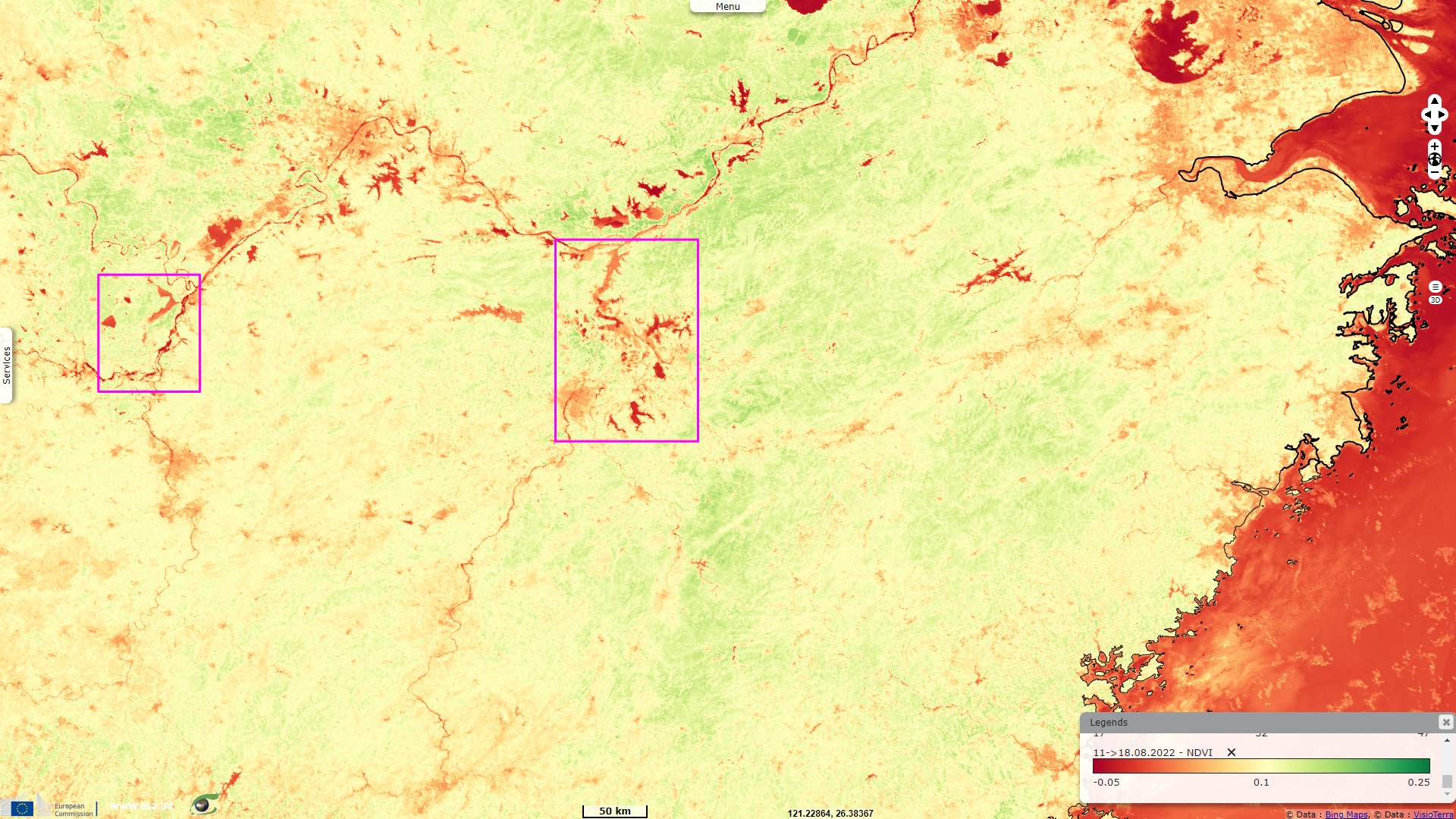 "The national 'yellow alert' issued [on 16 August] comes after regions from Sichuan in the southwest to Shanghai in the Yangtze Delta have experienced weeks of extreme heat, with government officials repeatedly citing global climate change as the cause. The warning is two notches from the most serious warning on Beijing’s scale. Chongqing accounted for six of the 10 hottest places in the country on [16 August], with temperatures in Bishan district already approaching 39 degrees Celsius."
Fig. 6 - S2 (26.08.2020) - Chongqing lies between the Tibetan Plateau and the plains of the Yangtze, in the sub-tropical zone often swept by moist monsoons.
2D view 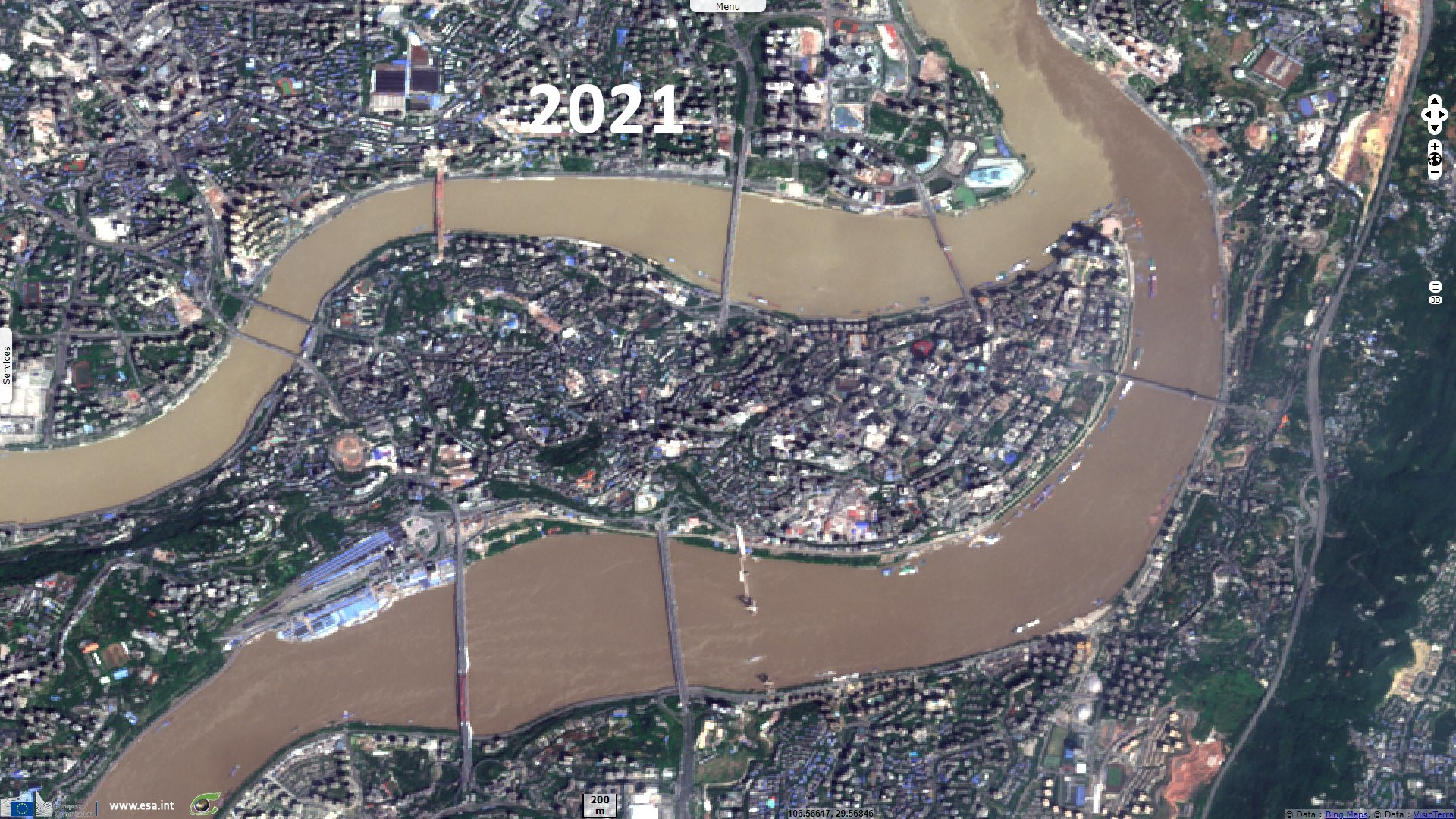 Regarding the region of Chongqing, Reuters articles states "As many as 66 rivers across 34 counties in the southwestern region of Chongqing have dried up, state broadcaster CCTV said on [on 16 August]. Rainfall in Chongqing this year has fallen by 60 percent compared to the seasonal norm, and the soil in several districts is severely lacking in moisture, CCTV said, citing local government data. The district of Beibei, north of Chongqing’s city center, saw temperatures of 45 degrees Celsius [on 15 August], according to the China Weather Bureau."
Fig. 7 - S2 (05.09.2022) - Due to the drought, the river bed of both the Yangtze river and its tributary, the Jialing, shows clearly in 2022.
2D view 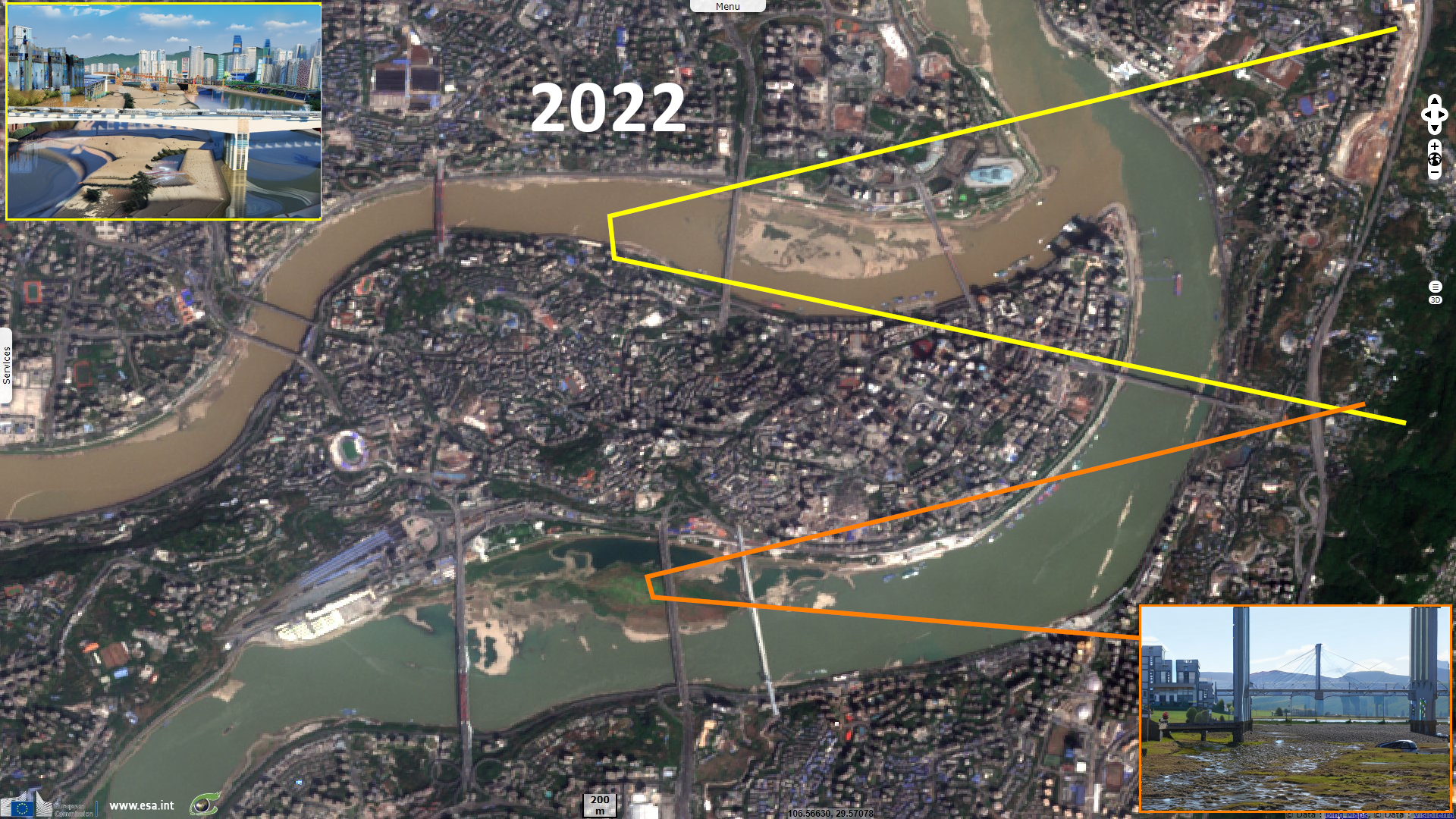 "As many as 66 rivers across 34 counties in the southwestern region of Chongqing have dried up, state broadcaster CCTV said on [on 16 August]. Rainfall in Chongqing this year has fallen by 60 percent compared to the seasonal norm, and the soil in several districts is severely lacking in moisture, CCTV said, citing local government data. The district of Beibei, north of Chongqing’s city center, saw temperatures of 45 degrees Celsius [on 15 August], according to the China Weather Bureau."
Fig. 8 - S3 OLCI (31.08.2021) - Lake Dongting and Lake Poyang are both located downstream on the Yangtze, near Wuhan.
2D view 2D view 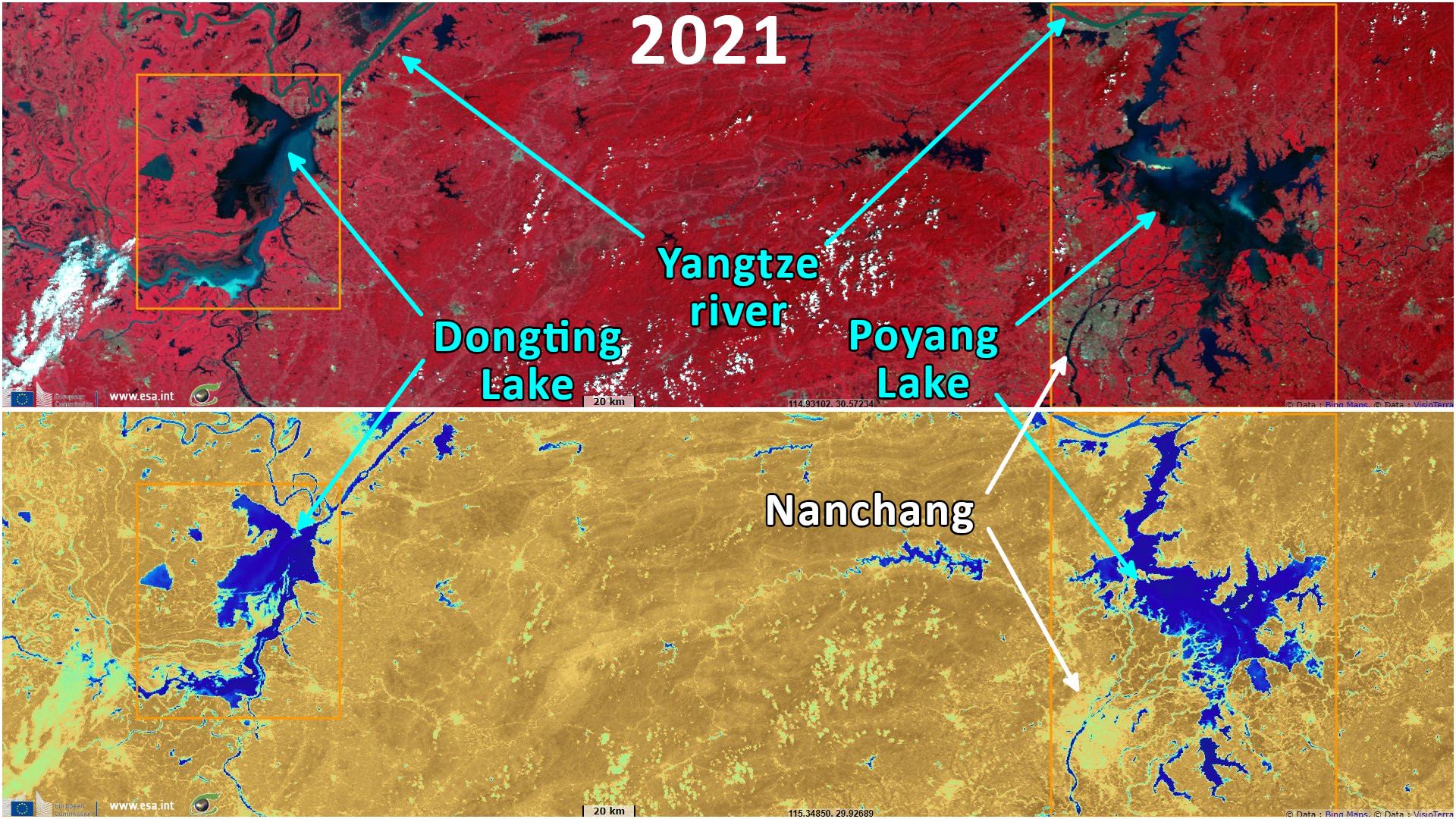 Another article published by the BBC deals with the large lakes downstream of Chongqing: "Lakes and tributaries have receded as a result of the drought, exposing riverbeds and even a 600-year-old Buddhist stone carving and rocks below the famous Guanyin Pavilion, in Wuhan, Hubei province."
Fig. 9 - S3 OLCI (21.08.2021) - As shown by the open water index, the area of these lakes has dropped spectacularly in 2022.
2D view 2D view 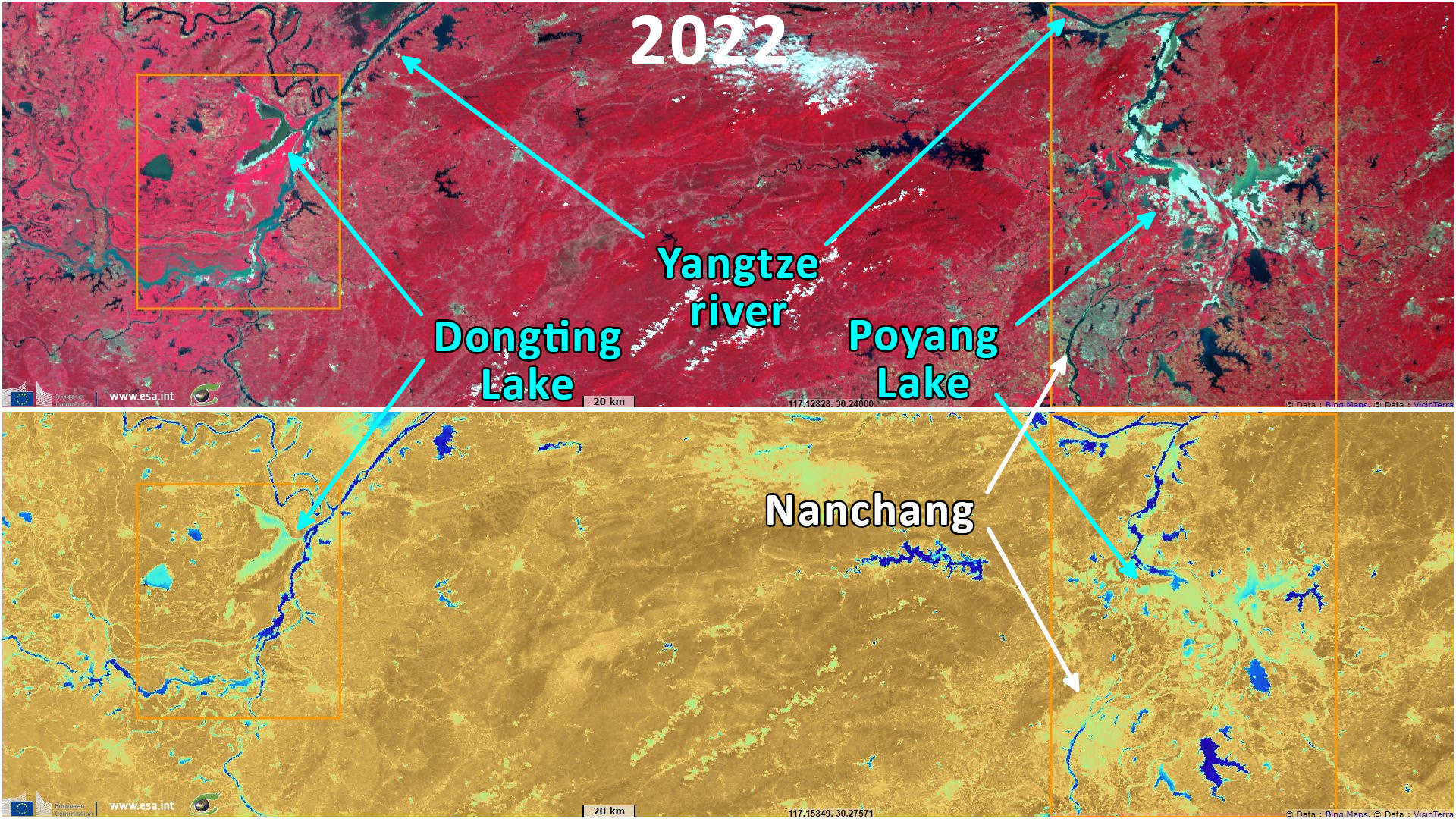 "Low river levels have reduced the ability of hydro-electric power stations in the area to generate energy. Emergency measures imposed to save electricity include factories closing, shops reducing opening hours and office buildings switching off air conditioning - all in response to the double-whammy of high demand for electricity and low production. In big cities sited along the river, Shanghai is switching off its famous waterfront lights and the city of Luzhou is turning off street lights at night, in an attempt to ease pressure on the power grid."
Fig. 10 - S3 OLCI (31.08.2021; 21.08.2022) - The largest, Lake Poyang, lost three quarters of its usual 3200 km². The loss of water cover shows in red.
2D view 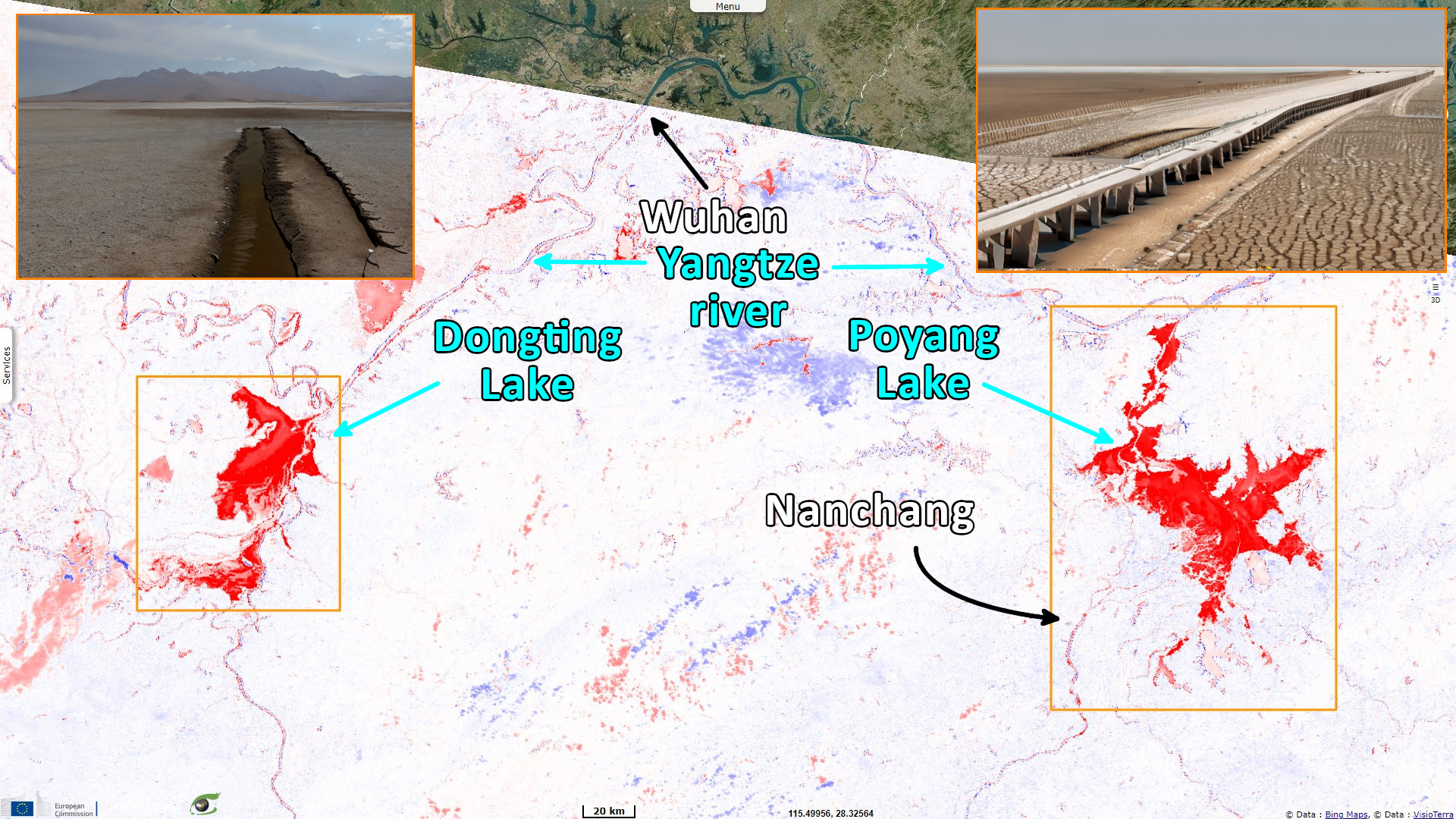 "Lakes fed by the Yangtze, such as the Dongting Lake in Hunan province, have shrunk dramatically, in an area that is reliant on irrigation for farming. China's largest freshwater lake, Poyang Lake in Jiangxi province, has shrunk by about 75%. according to local authorities. Farmers around the lake here rely on its nutrient-rich water to irrigate their fields and crops."
The views expressed herein can in no way be taken to reflect the official opinion of the European Space Agency or the European Union.
Contains modified Copernicus Sentinel data 2023, processed by VisioTerra.