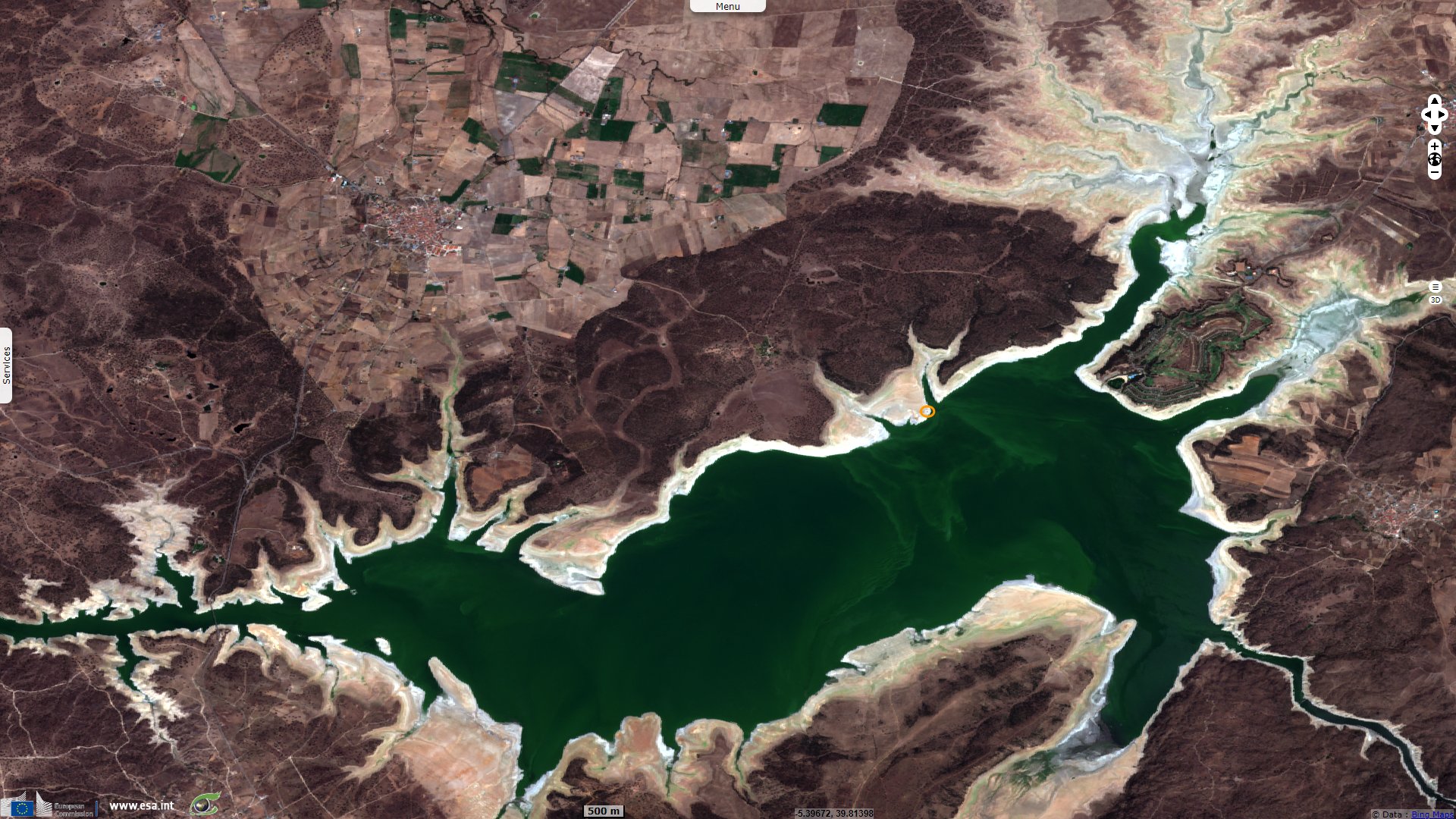 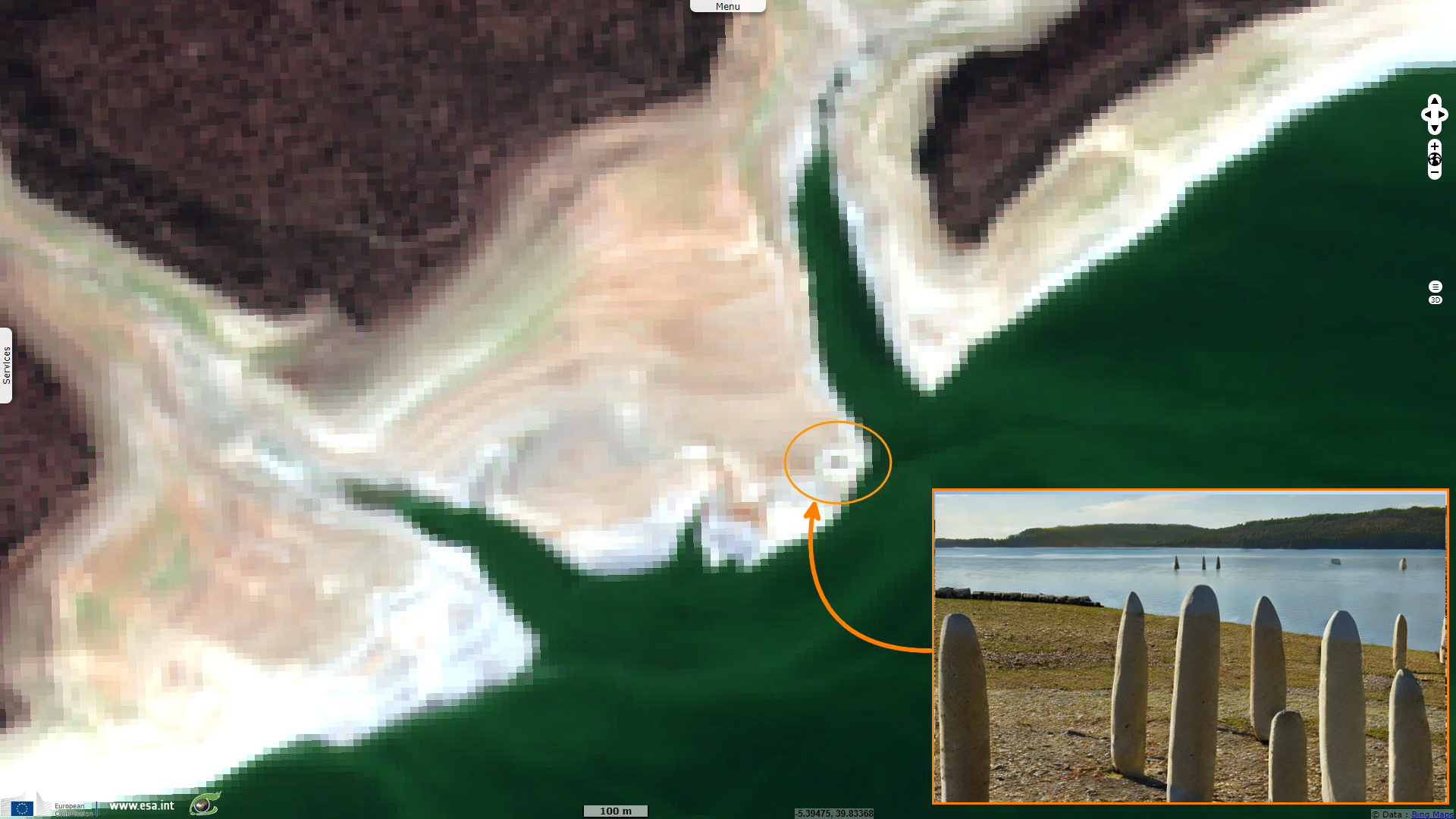 Kelly Kizer Whitt reported for earthsky.org that an archaeologic site had surfaced from Valdecanas reservoir: "In Spain, the drought exposed a prehistoric stone circle, dubbed the Spanish Stonehenge, in a reservoir whose water level has dropped to 28% of capacity. Archaeologists believe that the circle of dozens of megalithic stones, officially called the Dolmen of Guadalperal, dates back to 5000 BCE. It currently sits fully exposed in one corner of the Valdecanas reservoir, in the central province of Cáceres."
Fig. 3 - S2 (21.07.2021) - Lake Vyrnwy is a reservoir in Wales which creation in 1888 flooded the village of Llanwddyn.
2D view 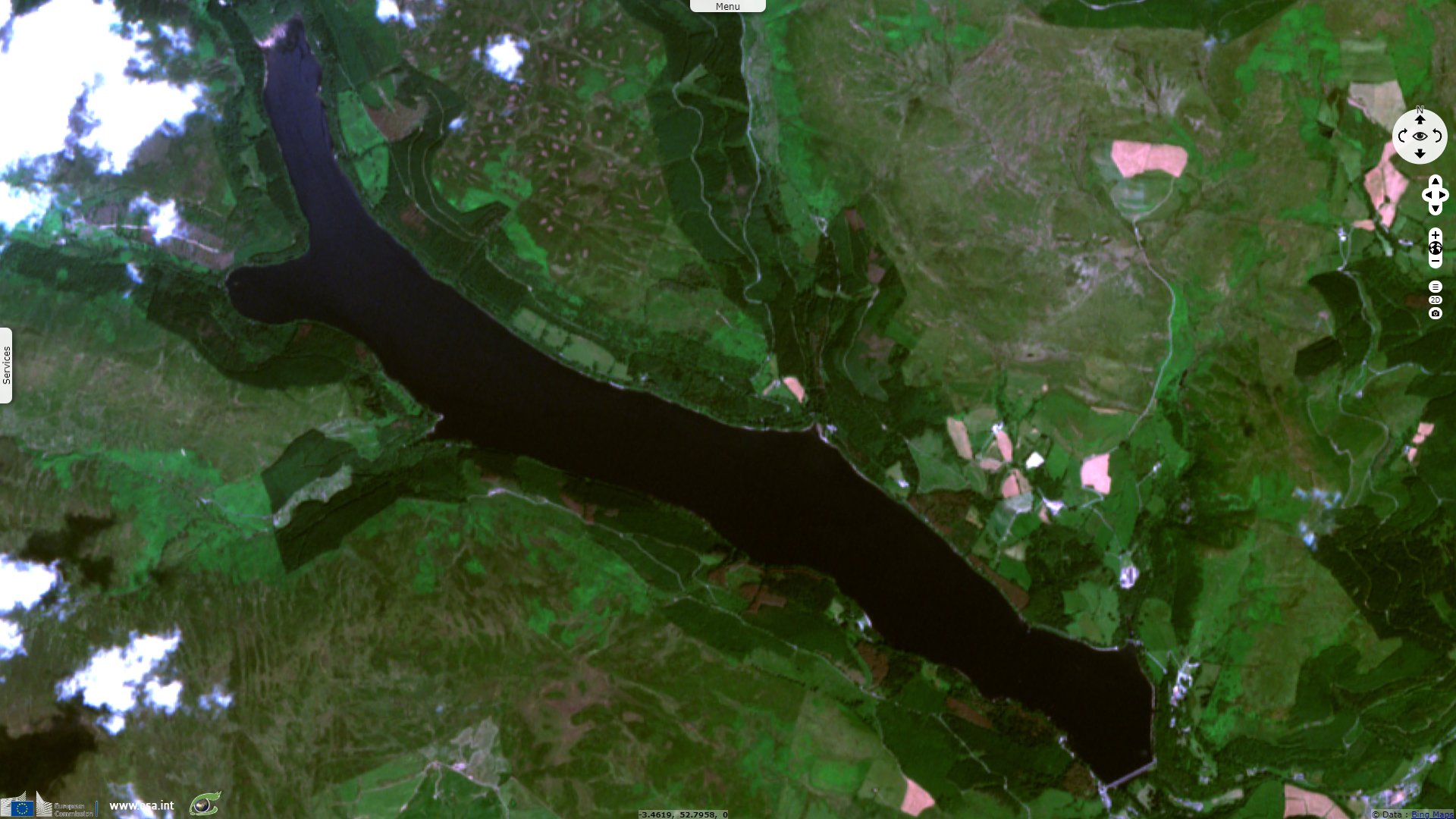 Lake Vyrnwy is a reservoir in Wales, created in 1888 by flooding the head of the river Vyrnwy valley. Construction of the dam flooded the village of Llanwddyn, including a church, two chapels, three inns, ten farmhouses, and 37 houses.
Fig. 4 - S2 (12.08.2022) - When the reservoir is full, it is 26 m deep and contains 59.7 hm³. Now mostly empty, a sunk village is revealed.
2D view 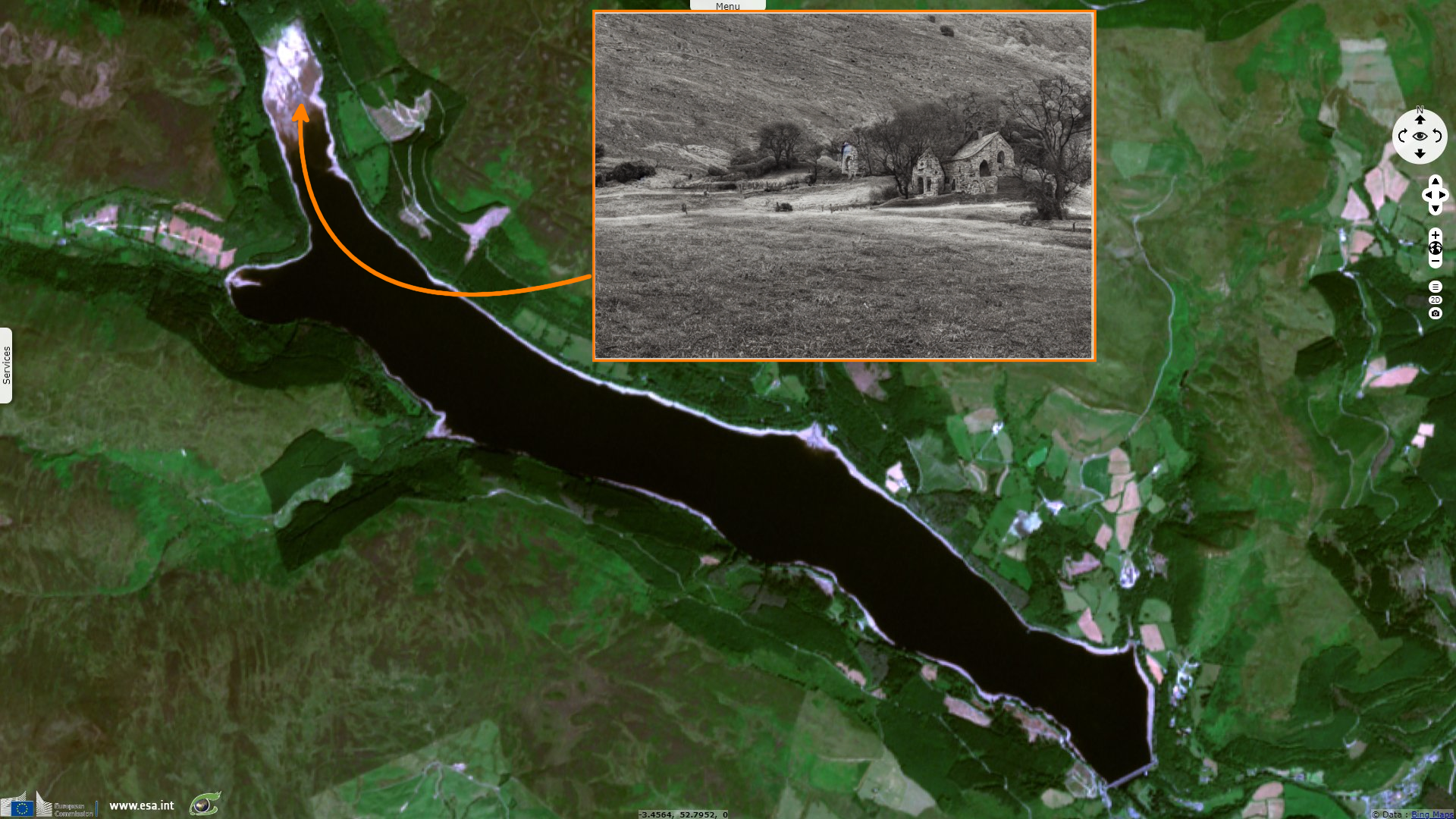 Submerged since 1888, the Welsh village of Llanwddyn resurfaced in early August. Since its sinking underneath the artificial lake, this is the second time after 1976 that the ancient town has been exposed.
Fig. 5 - S2 (28.07.2021) - Alto Lindoso reservoir near the Spanish-Portuguese border, it was partly empty in 2021.
2D view 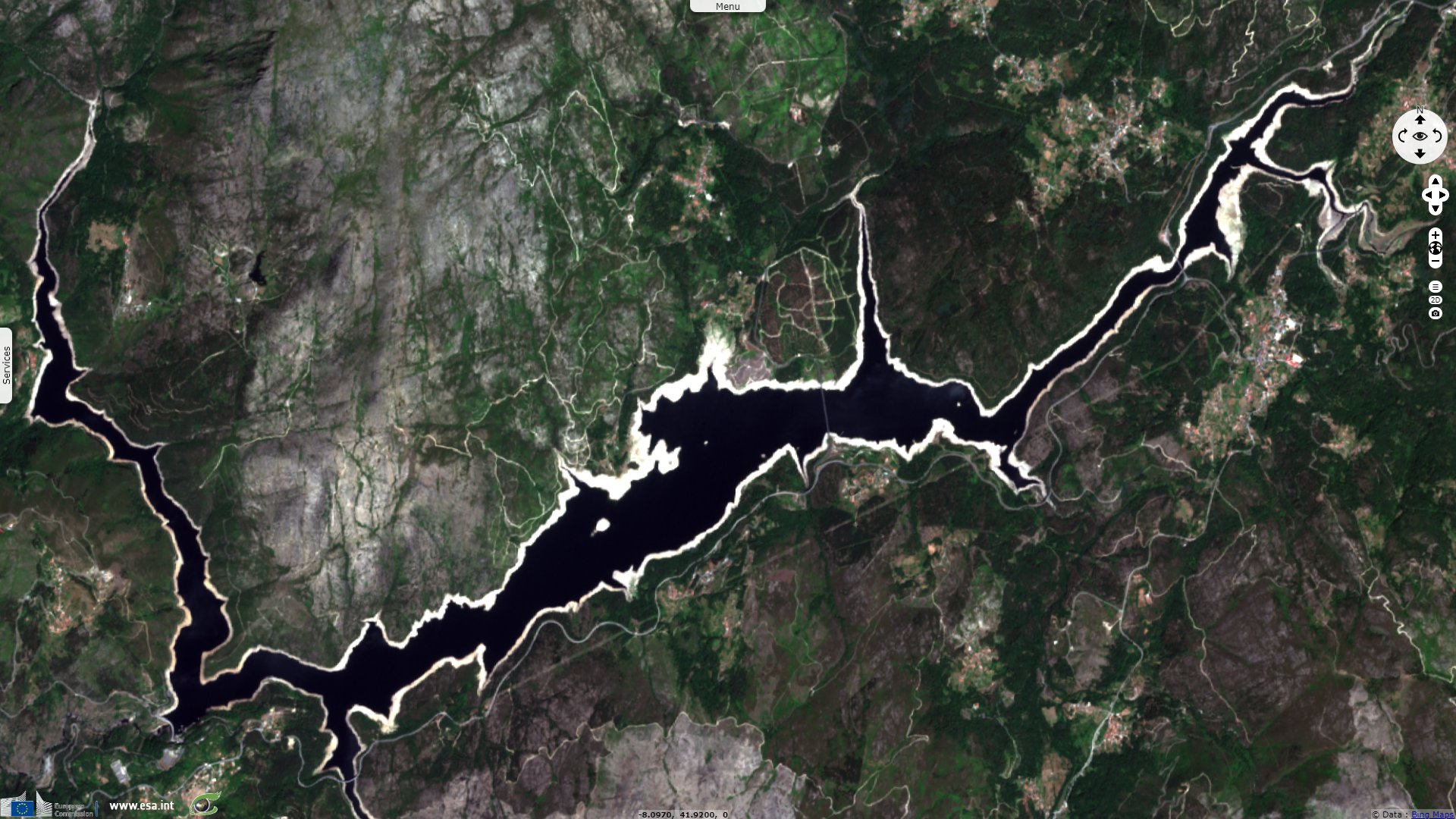 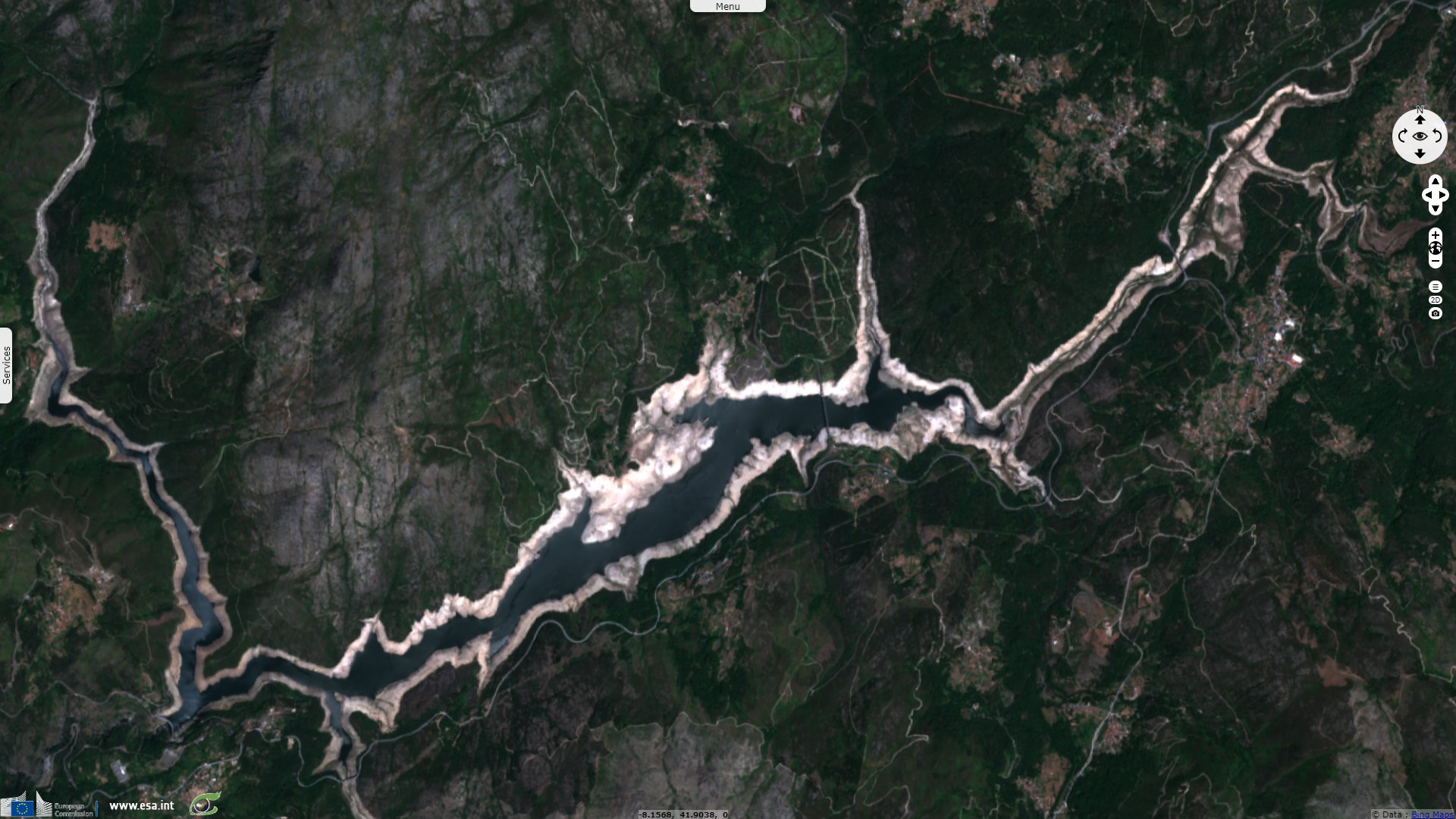 In an article published back in February 2022 for Reuters, before the current drought worsened the lake depletion, Guillermo Martinez wrote: "A ghost village that has emerged as drought has nearly emptied a dam on the Spanish-Portuguese border is drawing crowds of tourists with its eerie, grey ruins. With the reservoir at 15% of its capacity, details of a life frozen in 1992, when the Aceredo village in Spain's northwestern Galicia region was flooded to create the Alto Lindoso reservoir, are being revealed once more."
Fig. 7 - S2 (31.07.2022) - Zoom on Aceredo ghost village, revealed beneath Alto Lindoso reservoir.
2D view 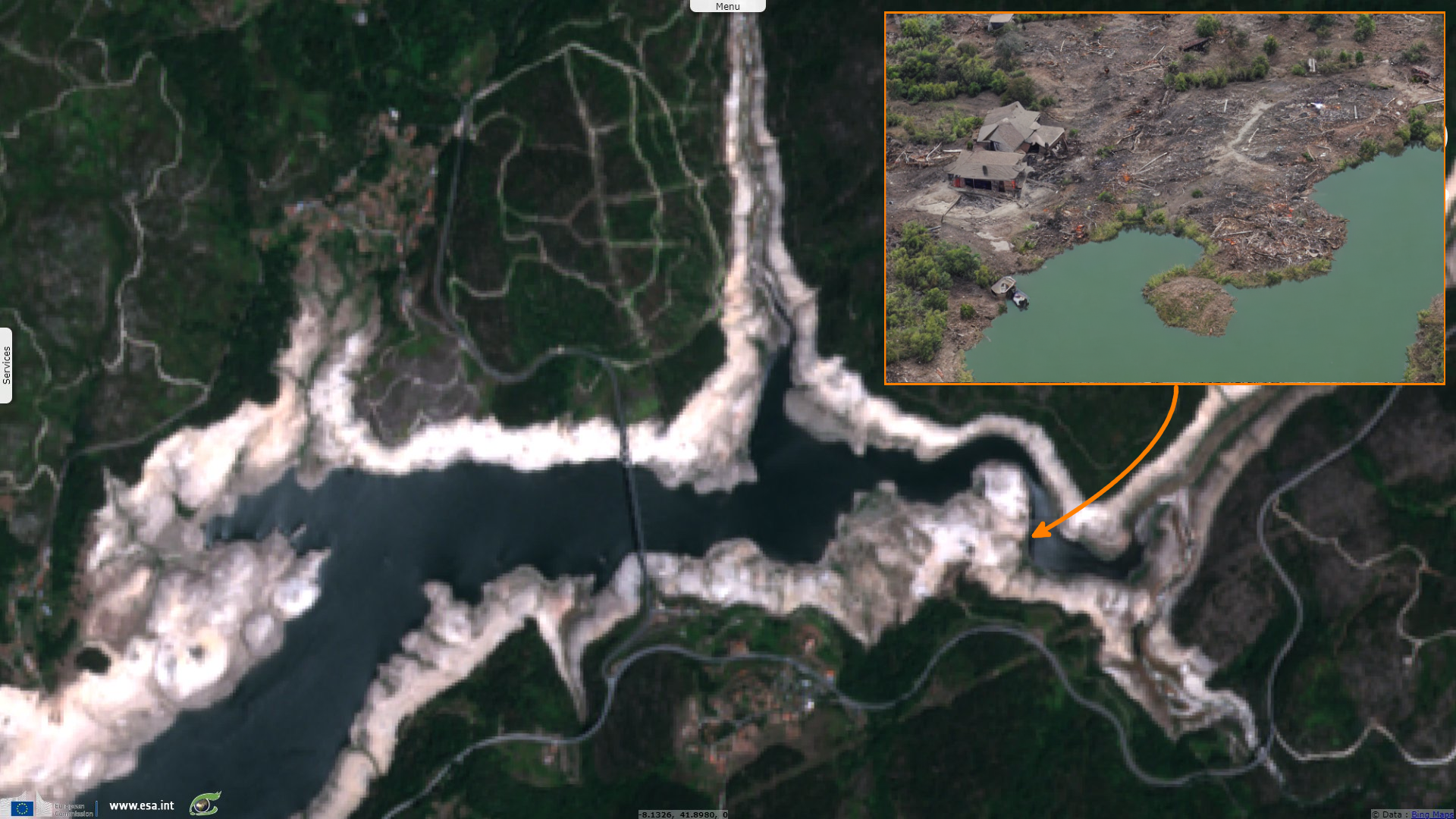 "On Feb. 1, Portugal's government ordered six dams, including Alto Lindoso, to nearly halt water use for electricity production and irrigation, due to the worsening drought." "Environment Ministry data shows Spain's reservoirs are at 44% of their capacity, well below the average of about 61% over the last decade, but still above levels registered in a 2018 drought."
Fig. 8 - S2 (17.08.2021) - The Lake of Serre-Ponçon is located in the Alps, beneath several 4000+ summits.
2D view 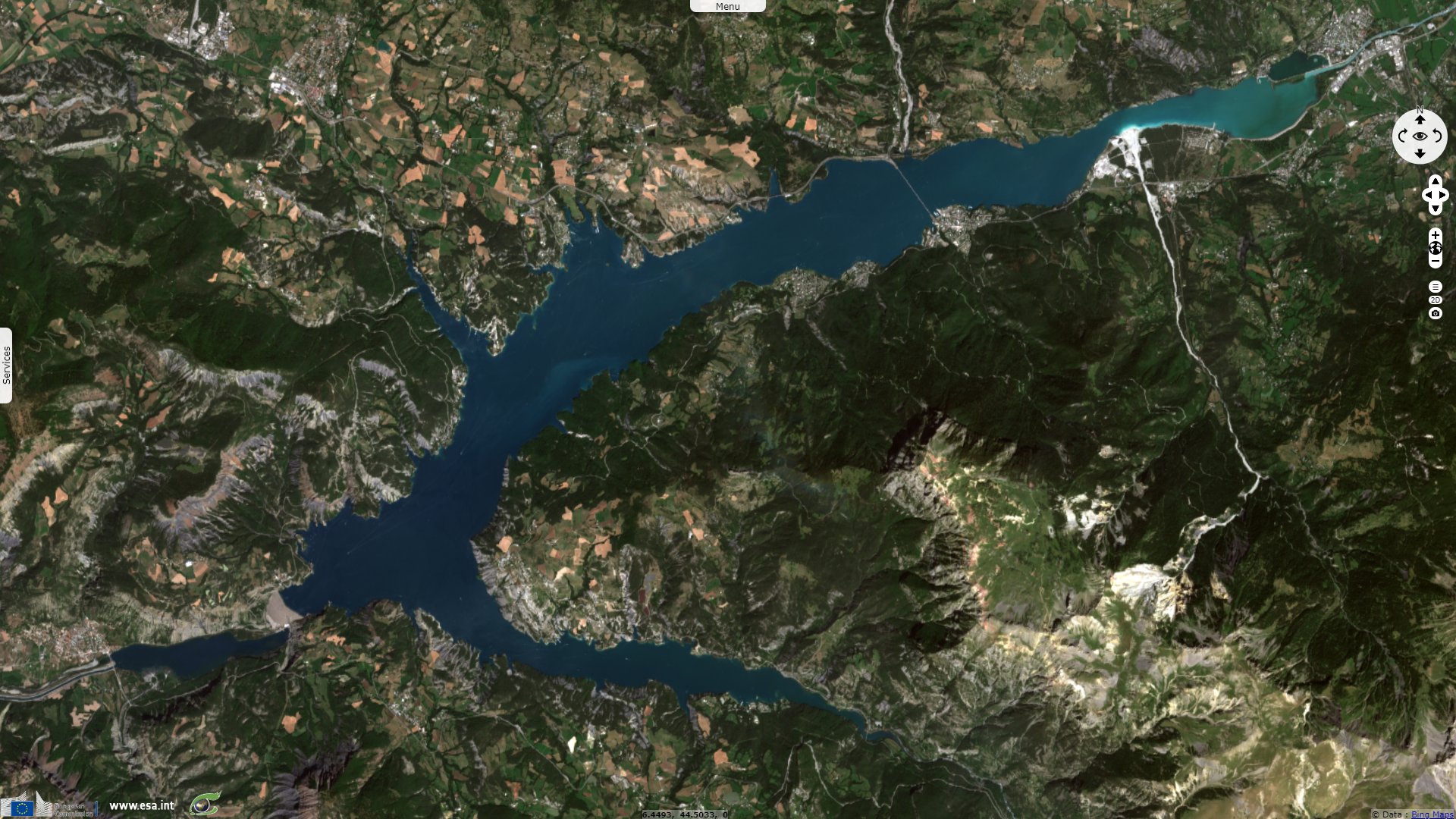 Located in the Hautes-Alpes, the Lac de Serre-Ponçon is the largest artificial lake in Europe with 1272 km3. It was created in 1959 by the construction of a dam on the Durance, two kilometres downstream from its confluence with the Ubaye. The building of the dam required the displacement of more than a thousand people and the destruction of more than 400 buildings. Two villages disappeared under the water, Savines and Ubaye.
Fig. 9 - S2 (12.08.2022) - Usual water activities enjoyed by tourists were partly restricted to allow water conservation.
2D view 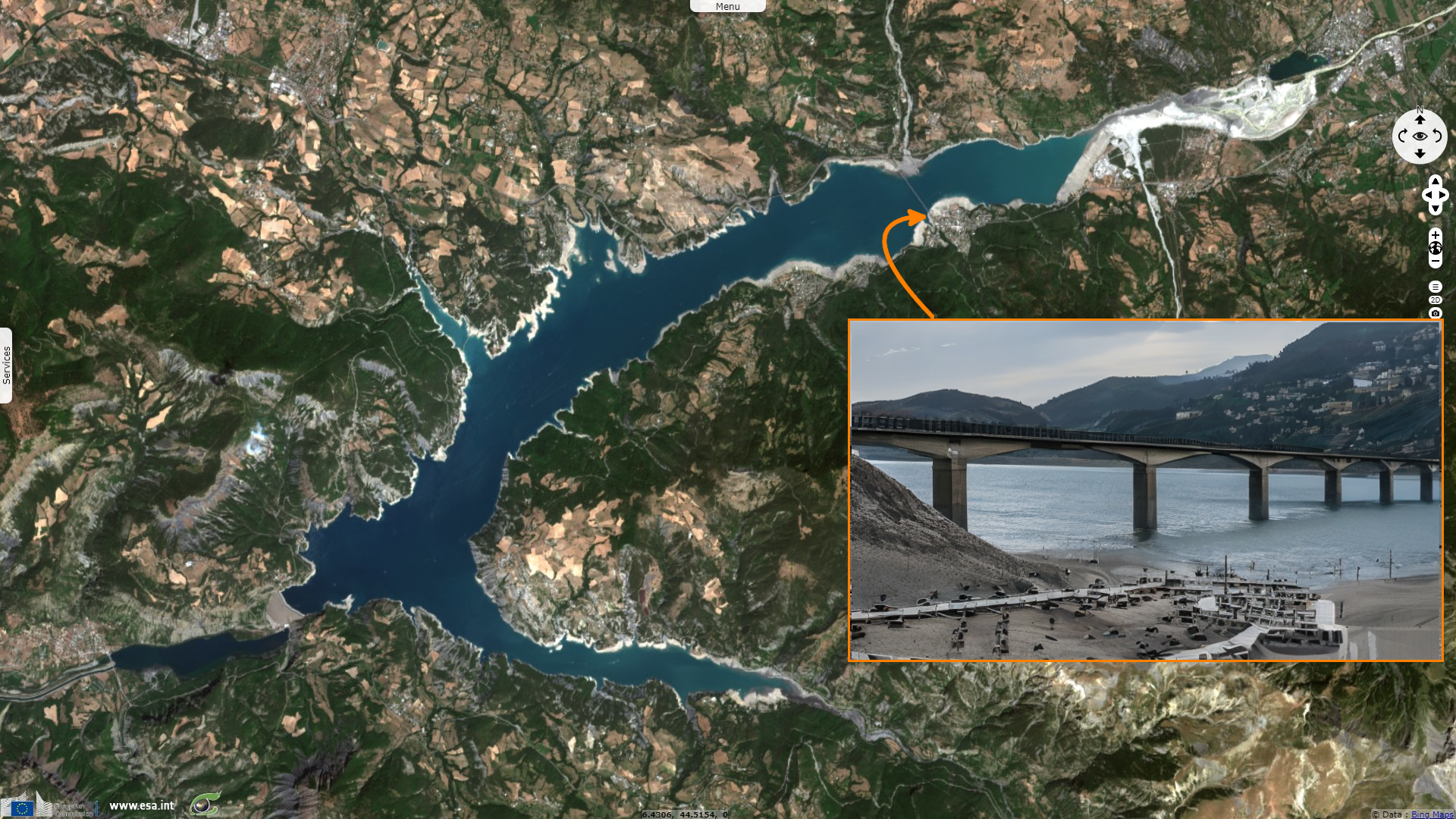 The waterworks contributed to the regulation of the floods of the Durance and to the irrigation of Provence and also produced electricity with 700 GWh/year. The lake has also become an important tourist attraction for the region's economy.
Fig. 10 - S2 (12.08.2022) - The dry lake bed became apparent near its source.
2D view 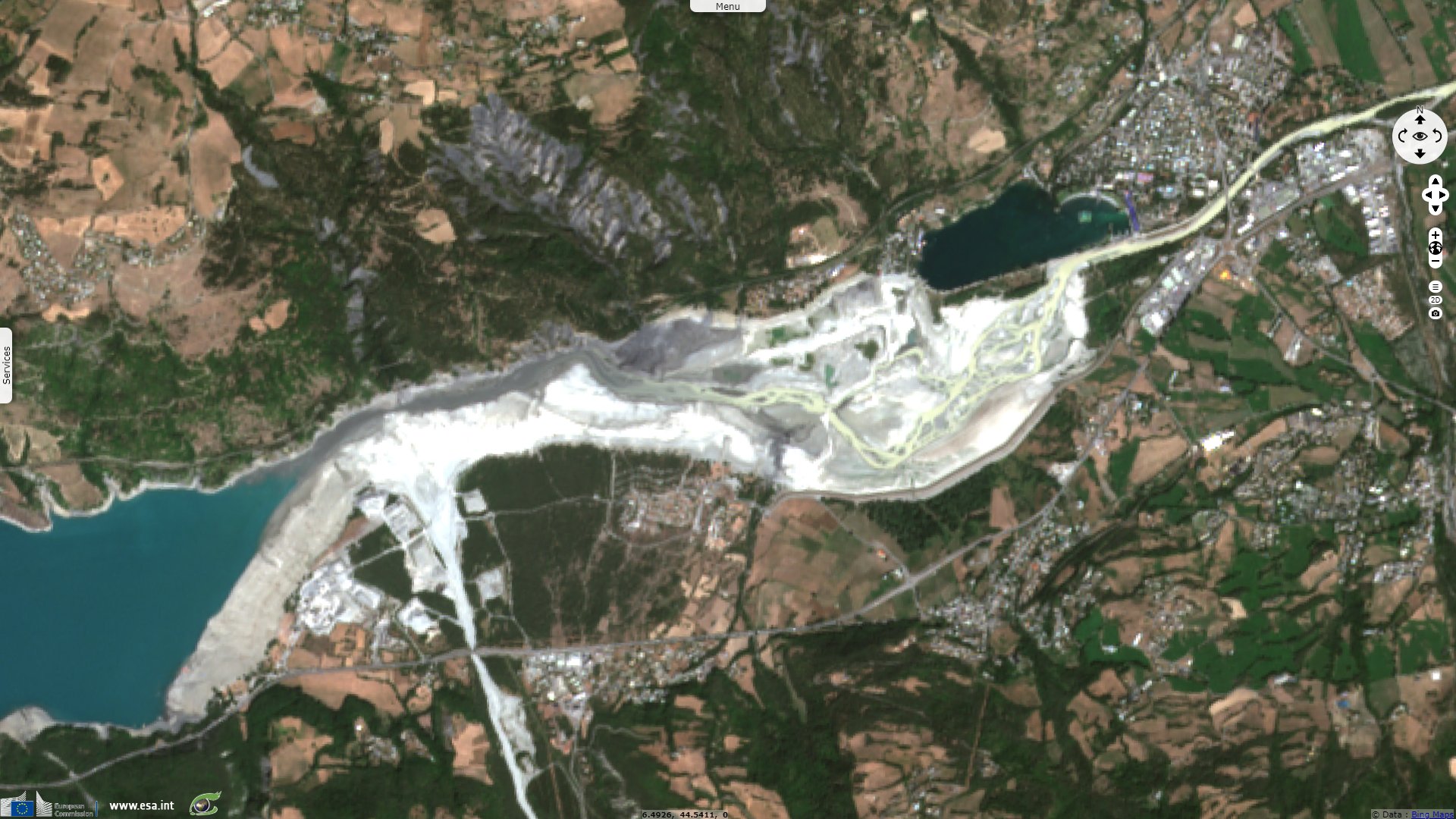 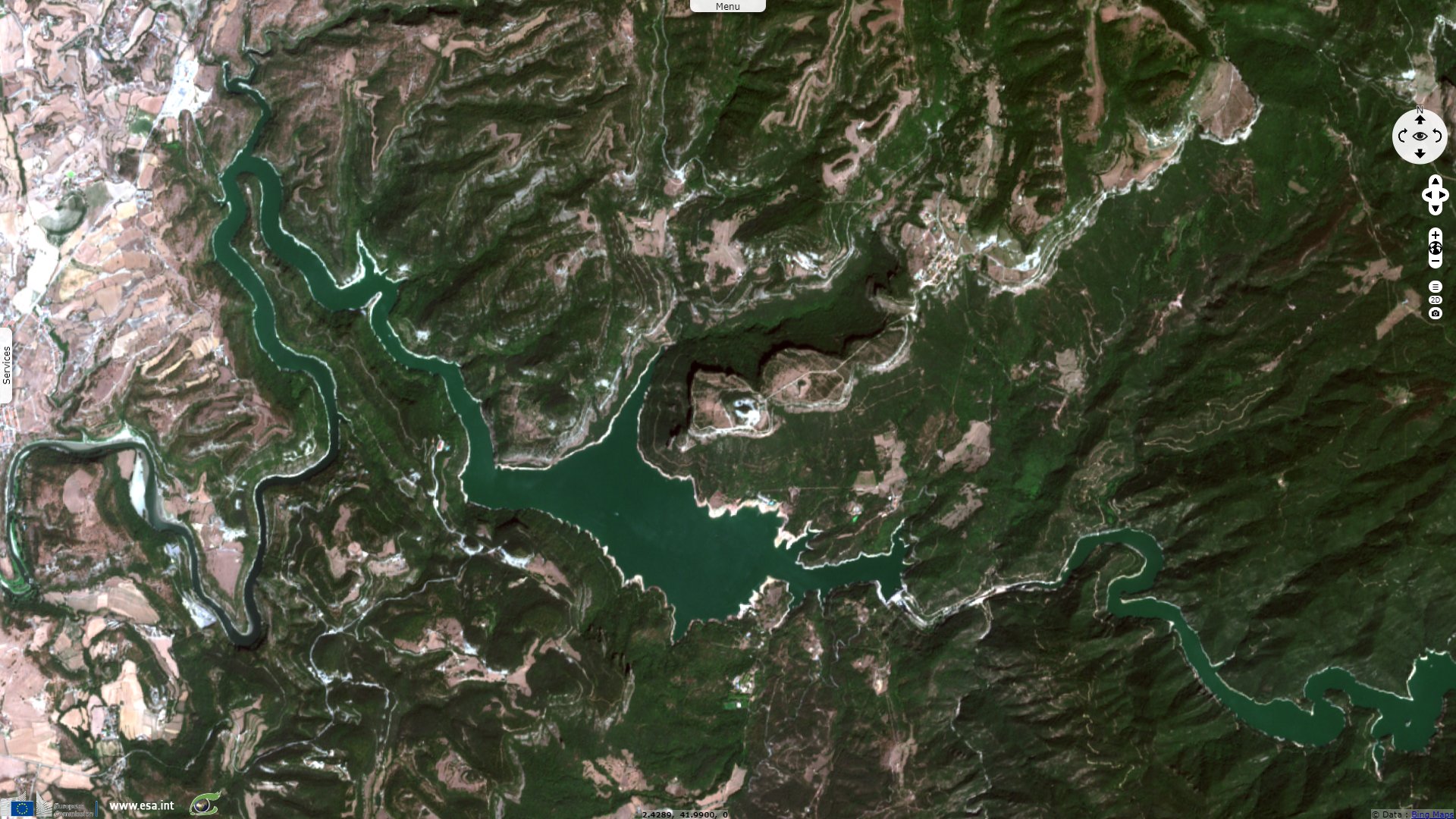 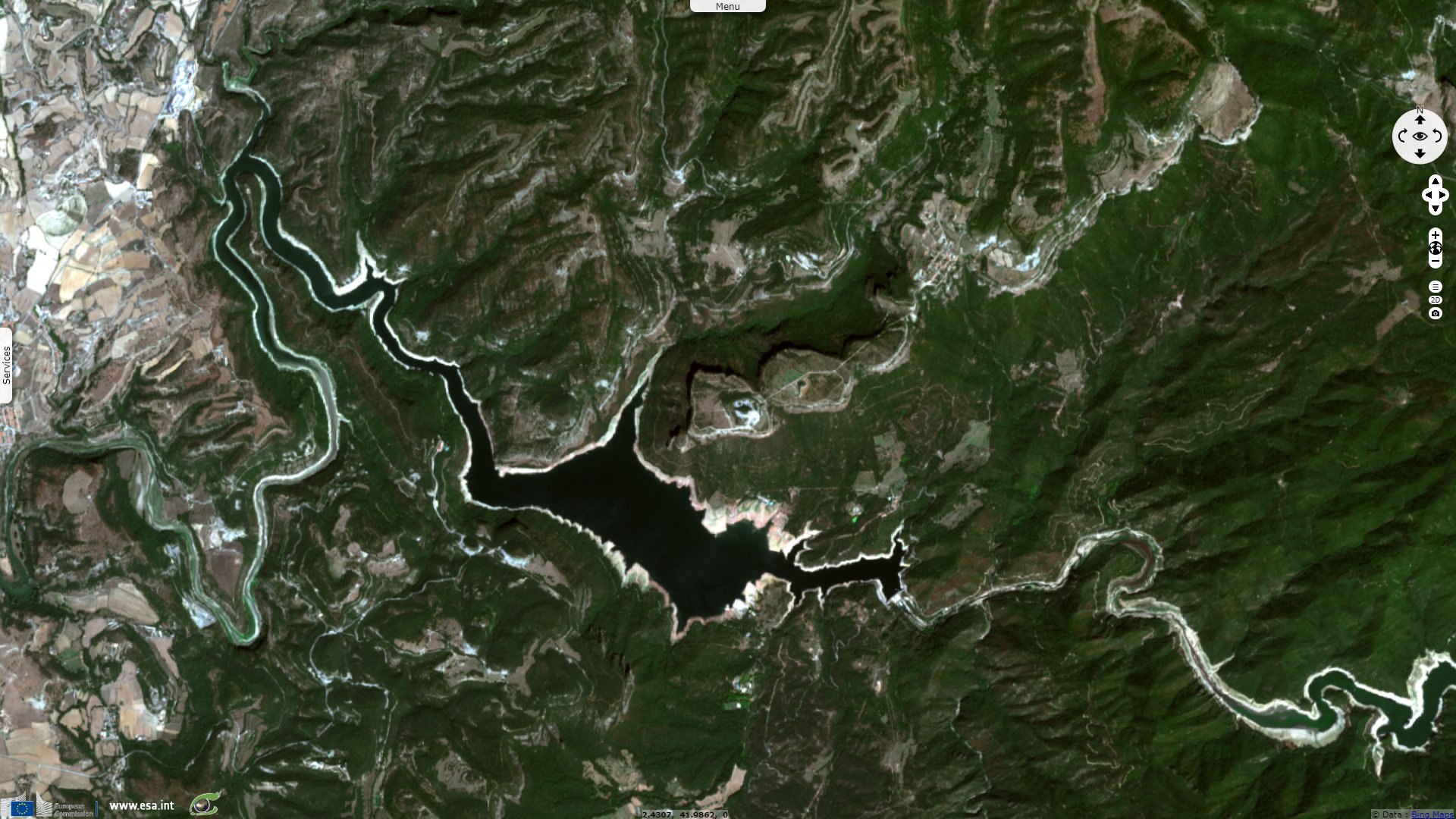 Despite being practically abandoned since 1860, where it was notified that the parish was uninhabited, San Román de Sau had a few farmhouses, a Romanesque bridge and a parish that reappears in times of drought.
Fig. 13 - S2 (20.08.2022) - The church of San Román de Sau was fully revealed by the current drought.
3D view 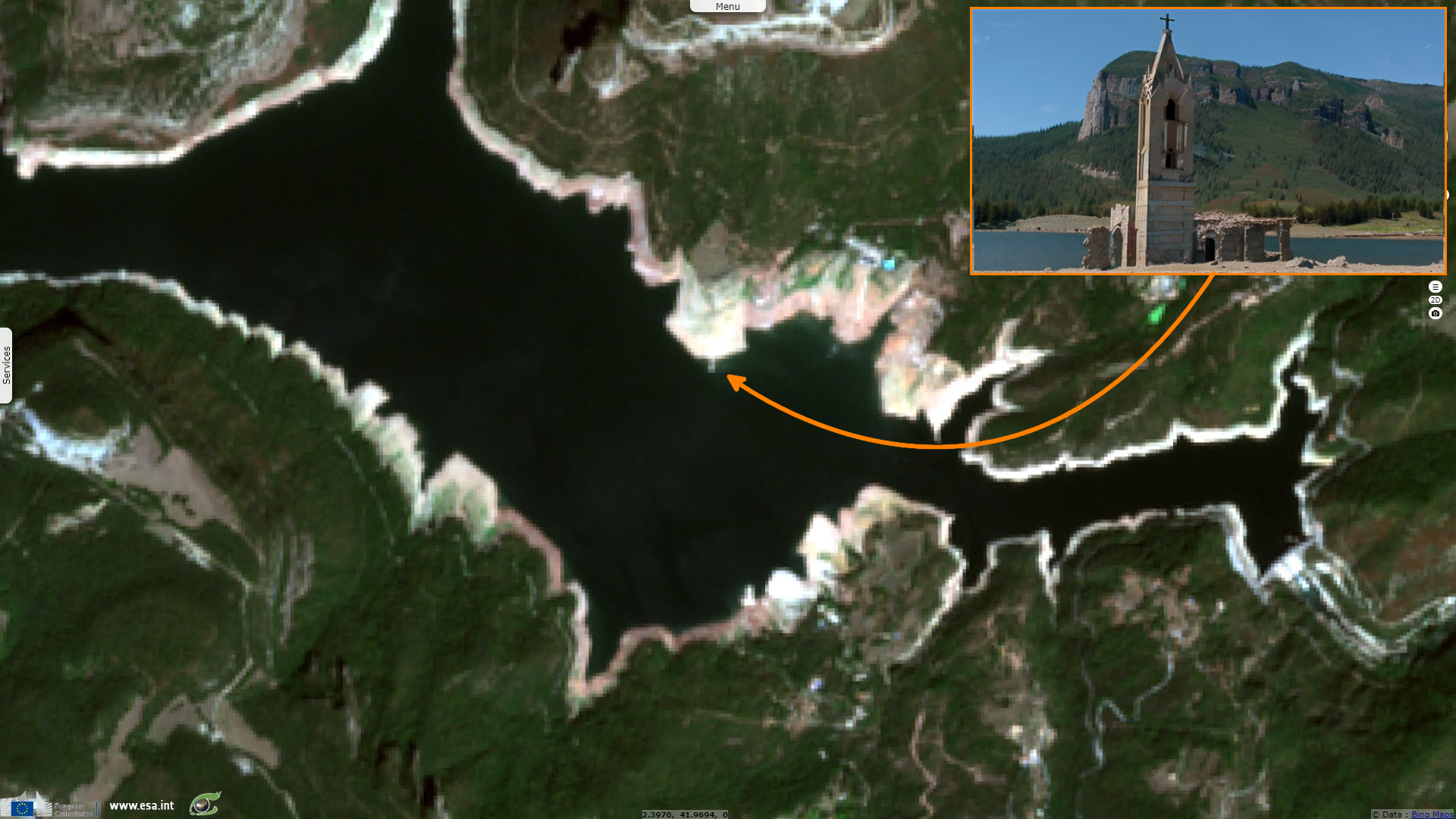 While these lakes received less water inputs and faced more evaporation, they have reduced capacity for energy generation while they face higher demand in irrigation and nautic activities. Highlighted by the revelation of sunk structures, the current extreme drought endangers these different roles.
The views expressed herein can in no way be taken to reflect the official opinion of the European Space Agency or the European Union.
Contains modified Copernicus Sentinel data 2023, processed by VisioTerra.