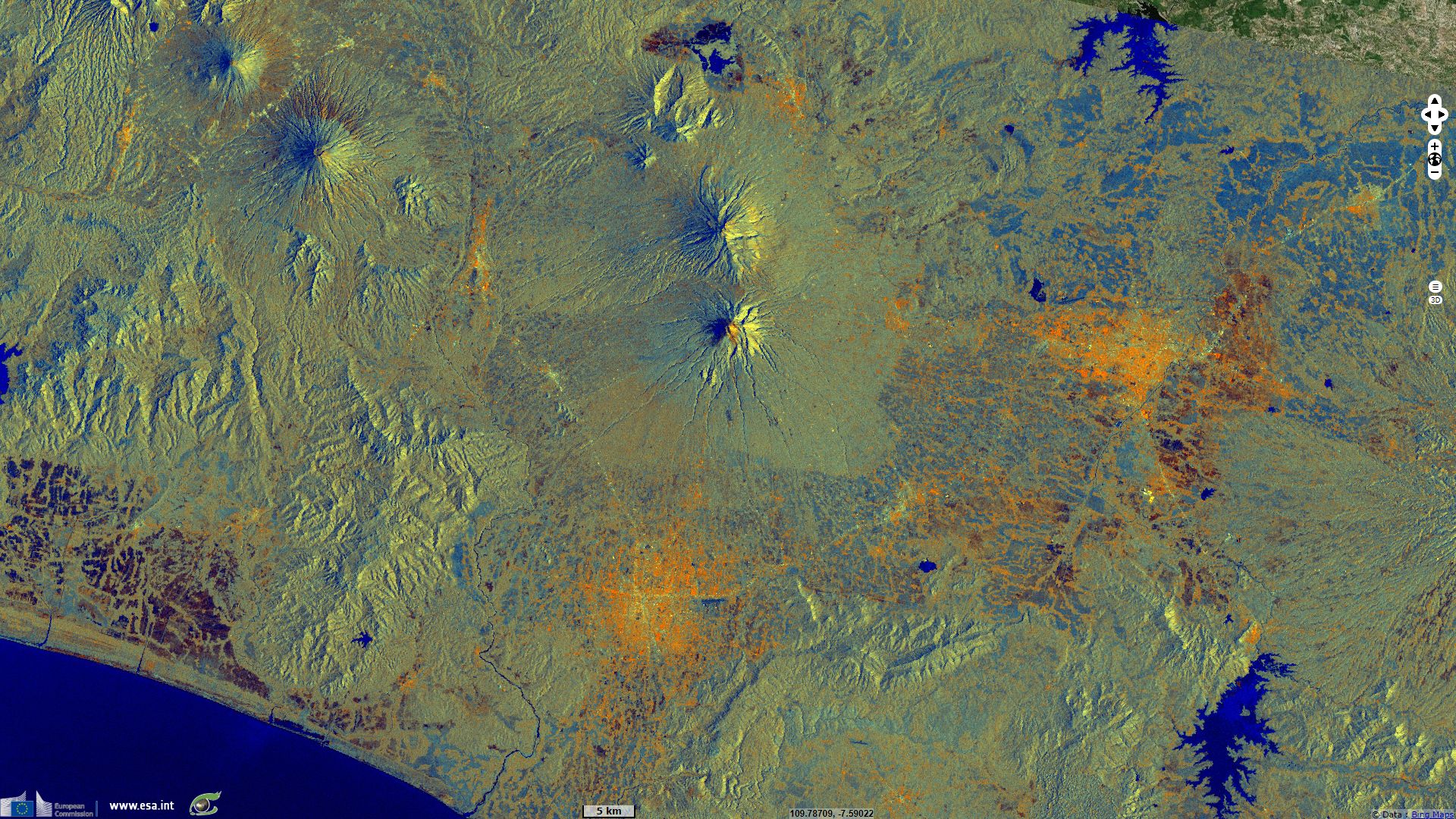 Being the most active volcanoes in Indonesia, located in a densely populated are, the Merapi volcano is one the Decade volcanoes. It was the subject of a work published in 2015 by Lavigne Franck & Morin Julie from the Laboratoire de Géographie Physique and Surono from the Indonesian Geological Agency, the Atlas of Merapi Volcano. The atlas explains the tectonic situation of the region: "The Indonesian archipelago is the result of complex tectonic plate collision involving four different plates. Subduction of the continental Indo-Australian plate beneath the Eurasian plate formed the main Sunda-Banda volcanic arc stretching from Sumatra to the West, through Java, Bali, Nusa Tengara Islands till Banda to the East. To the East, subduction of the oceanic Pacific and Philippine Sea plates beneath the Eurasian plate has generated the Maluku and Sulawesi volcanic and tectonic provinces. The process of rapid subduction leads to the genesis of mountain chains, a high rate of volcanic activity, and tremendous stresses in the Earth's crust that cause its rupture along active faults. This makes this region one of the most seismically active of the World." 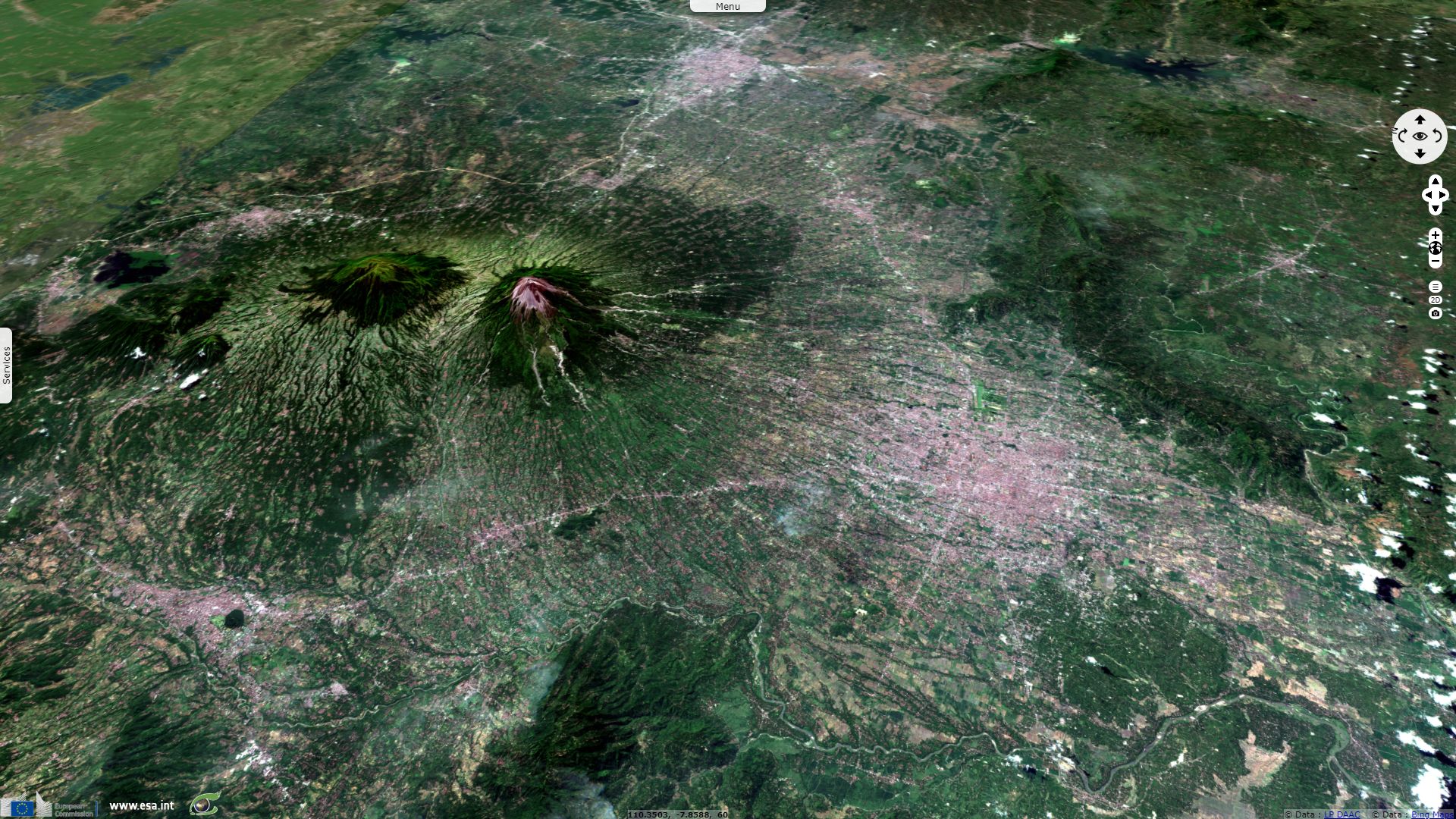 "From historical and seismic records, we know that very strong earthquakes with magnitude > 8 have occurred in the past almost everywhere in Indonesia, except in Borneo Island. Major earthquakes occur along the Sumatran Fault about once or twice every decade. Earthquakes of magnitude > 8 have been directly responsible for thousands of fatalities on this island (e.g. in 1833 or 1861). On 26 December 2004 (i.e. Boxing Day), a 9.1-magnitude earthquake triggered a tsunami in the Indian Ocean that killed 230 000 people, nearly three-quarters of whom were in Aceh (Lavigne et al., 2009). In October 2010, ten villages on the Mentawai islands were swept away by a 3-meters tsunami generated by a 7.7 magnitude quake. Deadly earthquakes triggering potential tsunami are also frequent in Java; in 2006, 5 700 people were killed by the 27 May earthquake and more than 800 by the 17 July tsunami. Deadly tsunamigenic earthquakes may also occur off the Lesser Sunda Islands (e.g. Flores in 1992 or Sumba in 1977) or off Papua (1996)." 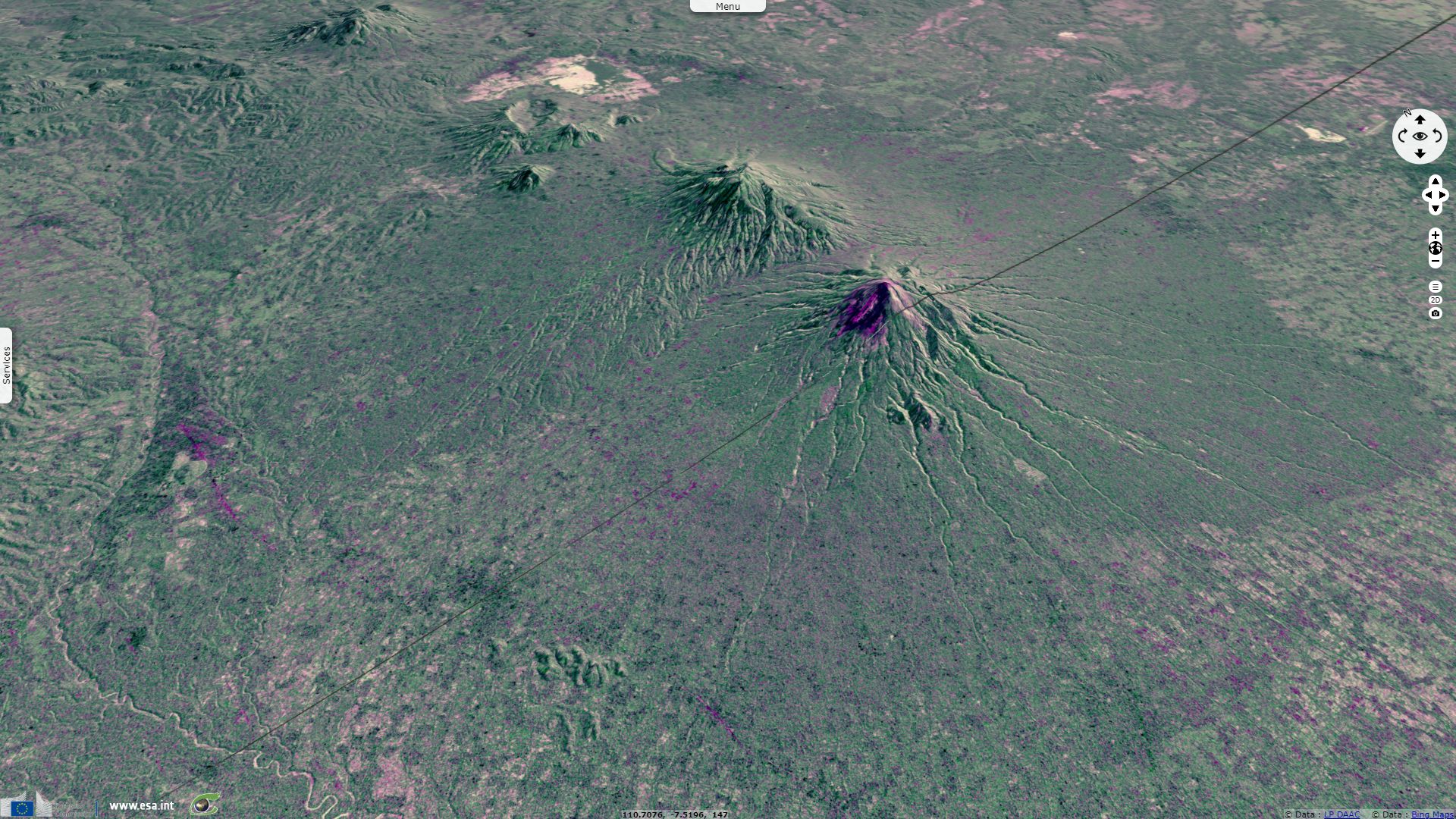 "Volcanoes in Indonesia are part of the Pacific Ring of Fire. The Indonesian archipelago contains about 130 active volcanoes, which is more than any other country. About 76 of them have erupted in historical times. It contains some of the world's most famous volcanoes like Toba, Krakatau, Tambora, and Merapi. The most active volcanoes of the country after Merapi are Semeru and Kelut, both on East Java. Semeru (3676 m) has erupted continuously since 1967, generating daily vulcanian explosions, pyroclastic flows every 1 to 7 years, and lava flows twice a century on average. Since AD 1000, Kelut has erupted more than 30 times, of which the largest eruption was at scale 5 on the Volcanic Explosivity Index (VEI, defined by Newhall & Self, 1982). It has been responsible for thousands of deaths on Java island, mainly due to the sudden draining of its crater lake and subsequent lahars. Its last major eruption on 13 February 2014 sent a column of ash 25 km high, killed 2 people and forced 200 000 people to evacuate." 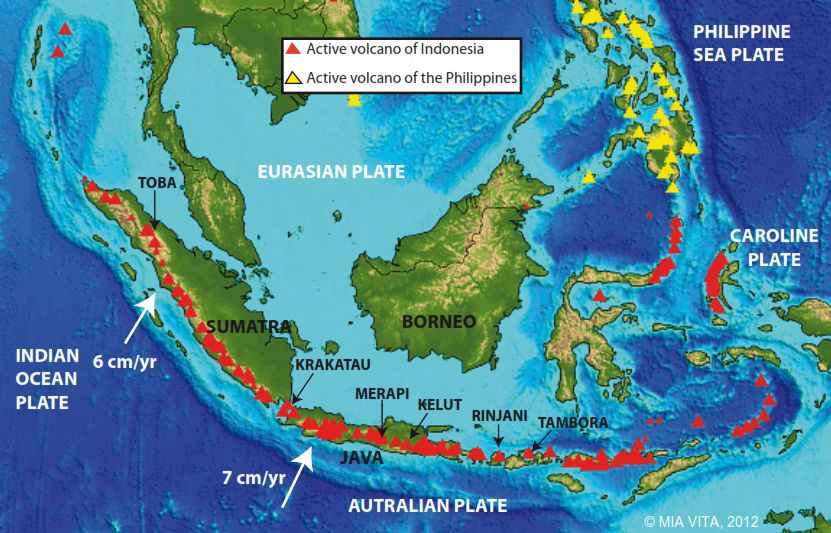 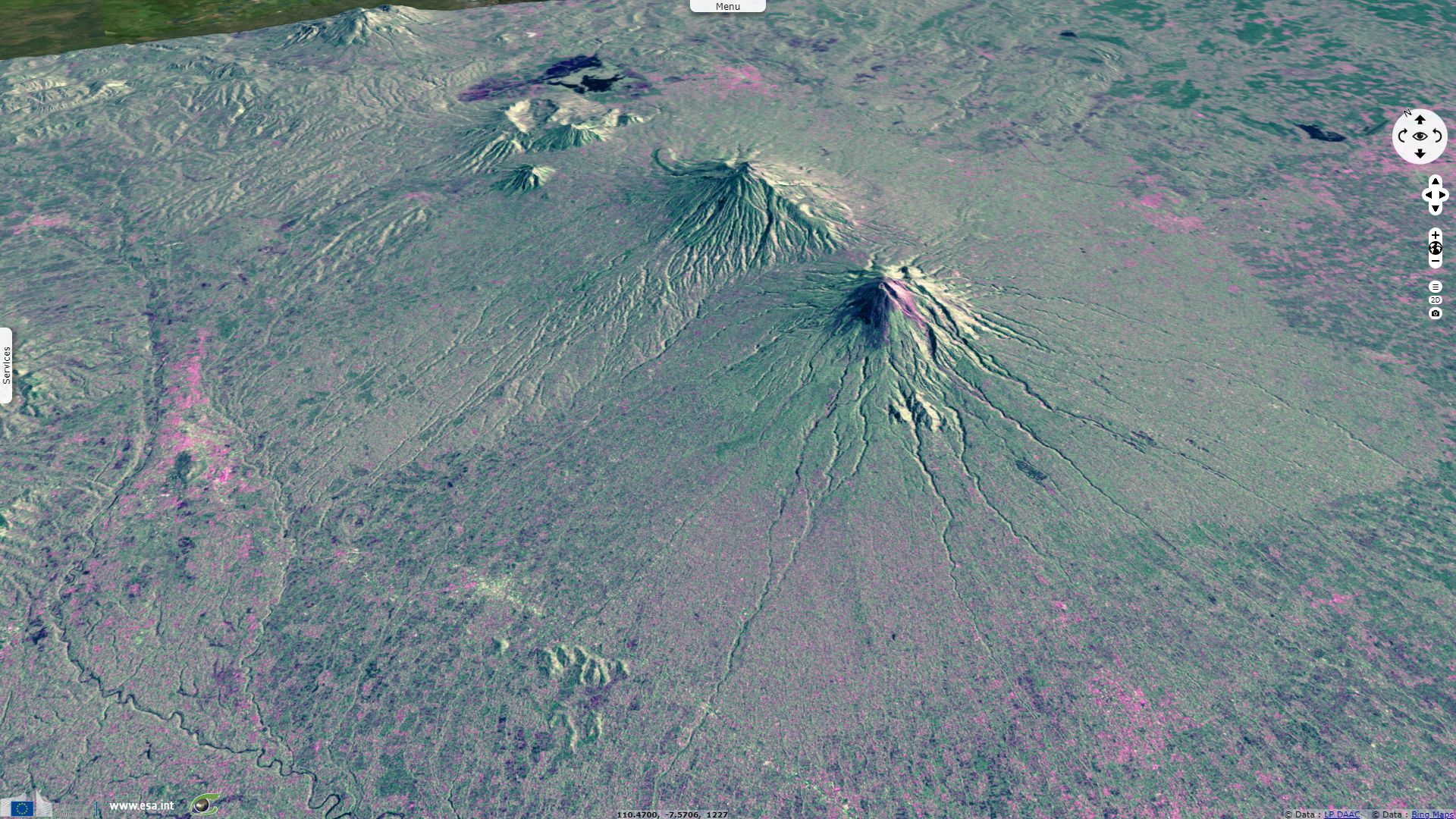 "Merapi stratovolcano (2965 m) is located in Java, Indonesia, 30 km north of the city of Yogyakarta. This region is famous for its pre Islamic temples, especially Borobudur and Prambanan temples. Merapi is the last edifice of a WNW-ESE trending chain of volcanoes in Central Java. It includes Mt. Sumbing (3371 m a.s.l.) and Mt. Sindoro (3151 m a.s.l.), which are active volcanoes although their activity has been very limited over the past centuries (e.g. Sumbing has had only one historic eruption in 1730). On the other end of the chain, Dieng Volcanic Complex is expressed topographically as a highland plateau (~2000 m a.s.l.), with an extensive assemblage of spatially, temporally, and genetically related major and minor volcanic centers. Merapi belongs to a second group of four stratovolcanoes oriented N-S that includes Ungaran, Telomoyo and Merbabu volcanoes." 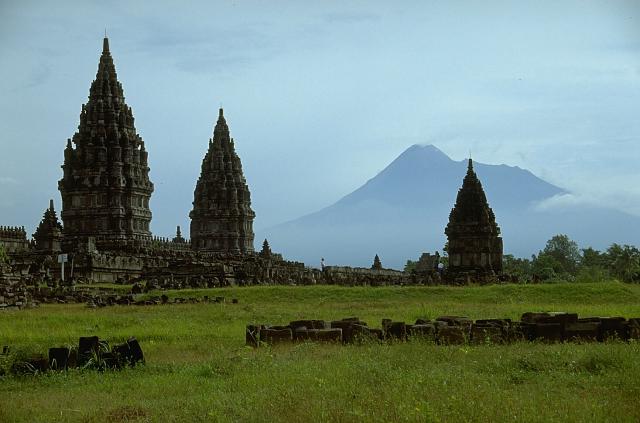 Merapi volcano, one of Indonesia's most active volcanoes, looms above the renowned Hindu temple complex of Prambanan, Indonesia's largest, dating back to 900 CE. Many of the temple complexes on the culturally rich Prambanan plain below Merapi have been affected by lahars (mudflows) that traveled tens of km from the volcano - Source: Lee Siebert, 1995 (Smithsonian Institution).
Fig. 5 - S2 (29.04.2018) - 12,11,2 colour composite - Like the pyroclastic flows, most of these rivers run south & west
3D view 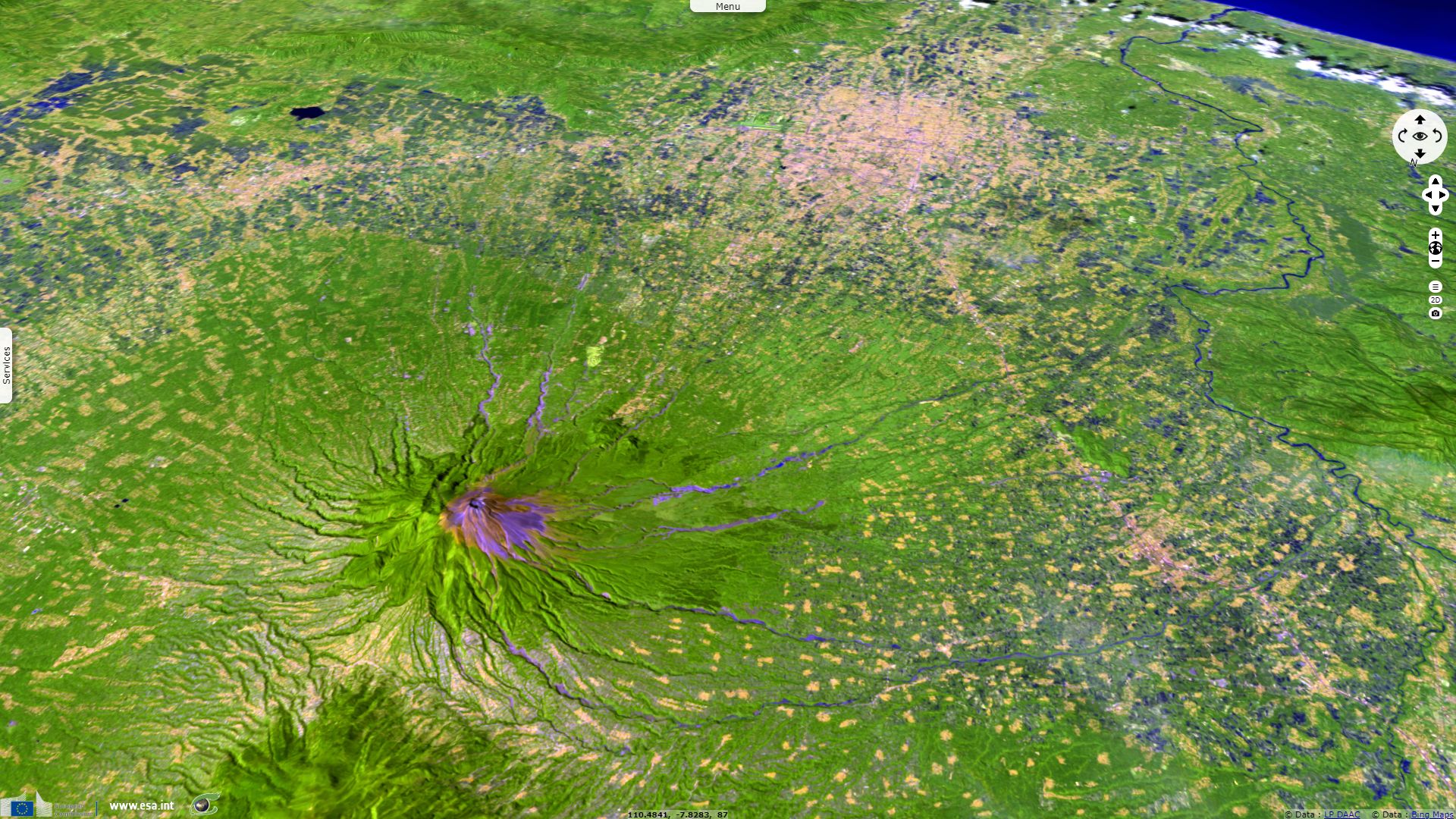 In the Putih River, lahars began during the November 5th, 2010 eruption. Eighteen lahars were recorded until January 3rd, 2011. Located 20 km southwest of the crater, Sirahan is a village on the banks of the Putih, whose riverbed does not exceed a 1.5 m depth for a 3 m width. From November to December 2010, lahars left over 5 m of deposits extending the riverbed to a 10 m width. Early January 2011, local communities built a dyke on the riverbed, leading to its elevation above the inhabited level by the quick accumulation of volcanic material transported by the river. On January 9th, 2011, a powerful 4 m thick lahar overflowed the dyke flooding Sirahan. The river eroded a new channel of 3.5 m depth across the inhabited area and the rice fields, until it converged back to the Putih, hundreds of meters downstream. This change of riverbed occurred due to the 25 lahars that flowed down the Putih between January 2011 and the end of the rainy season, in late May 2011. By then, the riverbed was 30 m wide and 7 m higher than before the eruption. These lahars generated important structural damage in Sirahan: 37 houses were destroyed, 217 damaged, 30 ha of arable land was buried under 3 m of lahar deposits.
Fig. 6 - S2 (29.04.2018) - 11,8,2 colour composite - The deposits resulting from volcanic activity overflowing the river bed show in purple.
3D view 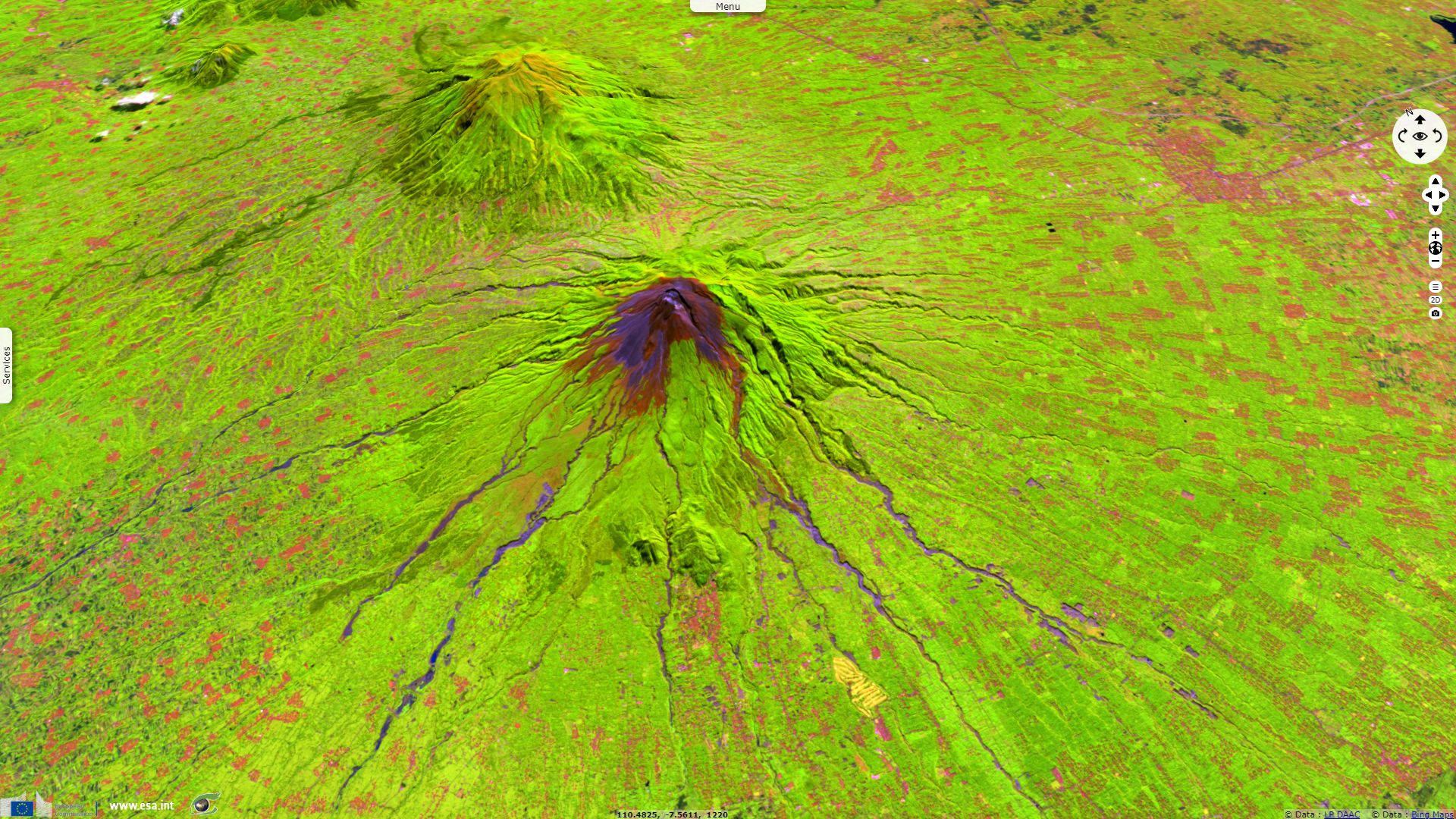 A phenomenon similar to the one that occurred in Sirahan took place in Ngerdi: lahars caused the river to change paths (defluviation). Most houses destroyed by the May 1st, 2011 lahar were located close to Gendol’s small riverbed (1.5 m deep by 3 m wide). This lahar did not meander around Ngerdi, but overflowed, crossing the village of Kayen, as well as its rice fields. Fifty one houses were damaged. After leaving over 40 000 m² of deposits, the river eroded a 1.5 m deep channel in the village. One day after the lahar, the Gendol was divided into two flows: one following the original riverbed, the other crossing the village.
Fig. 7 - S1 (15.04.2019) - vv,vh,ndi(vh,vv) colour composite - Steep volcanic slopes make the road access difficult even without emergency.
3D view 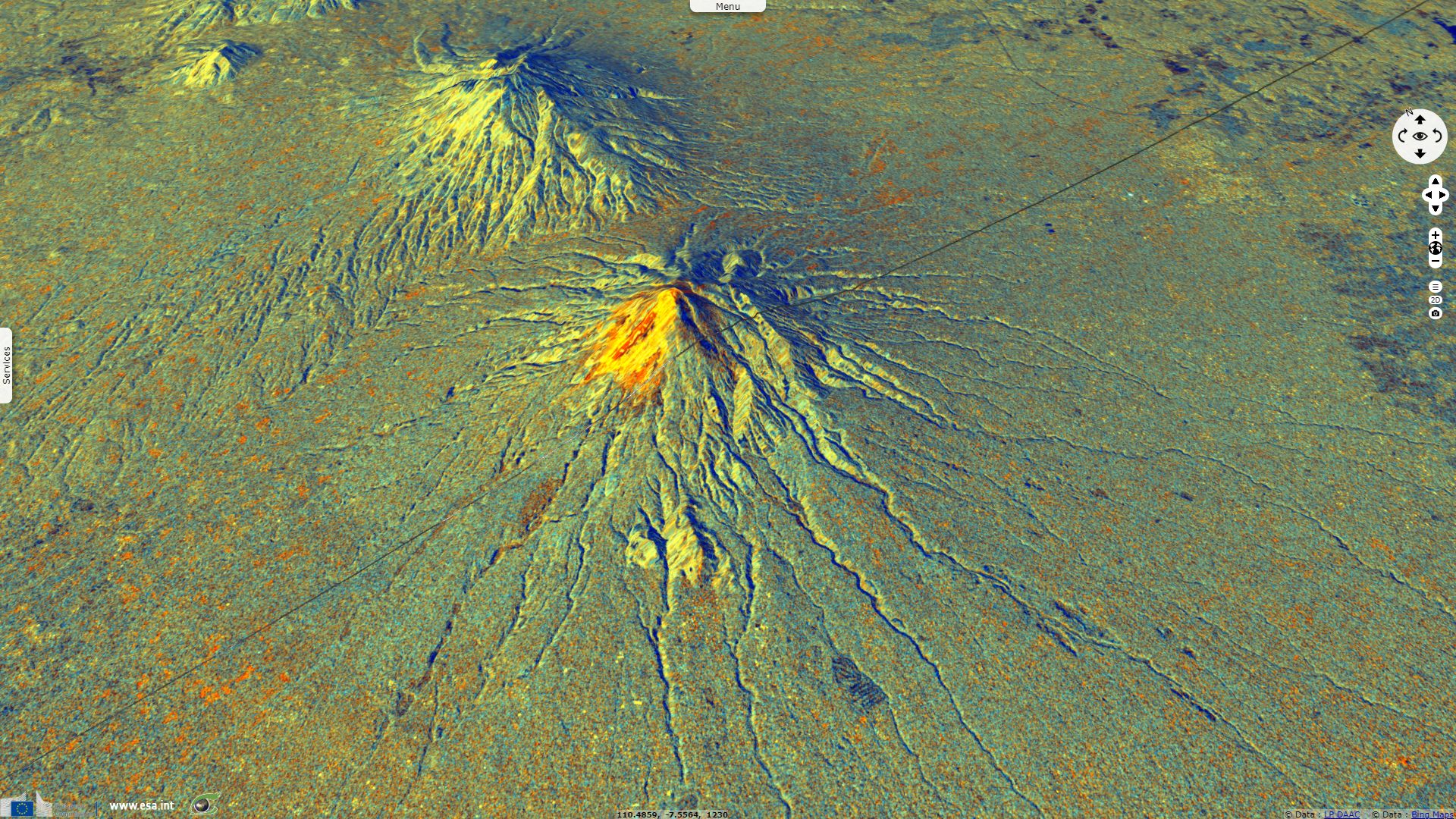 "Out of the 1.1 million people living on the flanks of the active Merapi volcano, more than half are at high risk in areas prone to pyroclastic flows, surges, and lahars. People accept the risk because of the rich volcanic soil. Over time, volcanic deposits can develop into some of the richest agricultural lands on Earth. Mapping human population density around Merapi reveals an increase in density from the summit to the base of the volcano’s flanks. Within a 10 km radius of the summit, the most hazardous area, population densities are of an average 764 inhabitants per square kilometer. Some highly populated villages (> 1500 inhab./km²) settled within a 5 km radius area are very exposed to the volcanic hazards. Their vulnerability is increased because the local people must use steep, damaged roads to flee. Villages located on Merapi’s western flank are densely populated due to the importance of rice cultivation. A very high population density is required, as this type of farming is very labour intensive since all work is done by hand. As this activity can develop along steep slopes, high population density is noted up to Ngargomulyo’s altitude, within the 10 km radius around the summit." 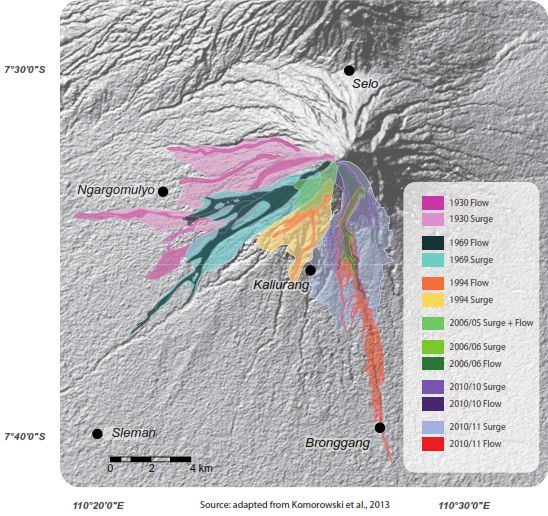 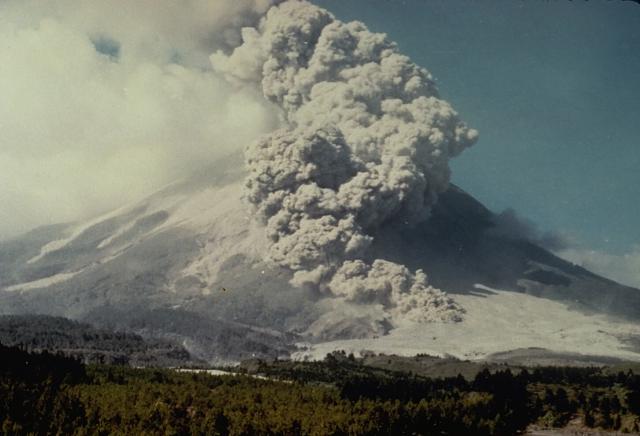 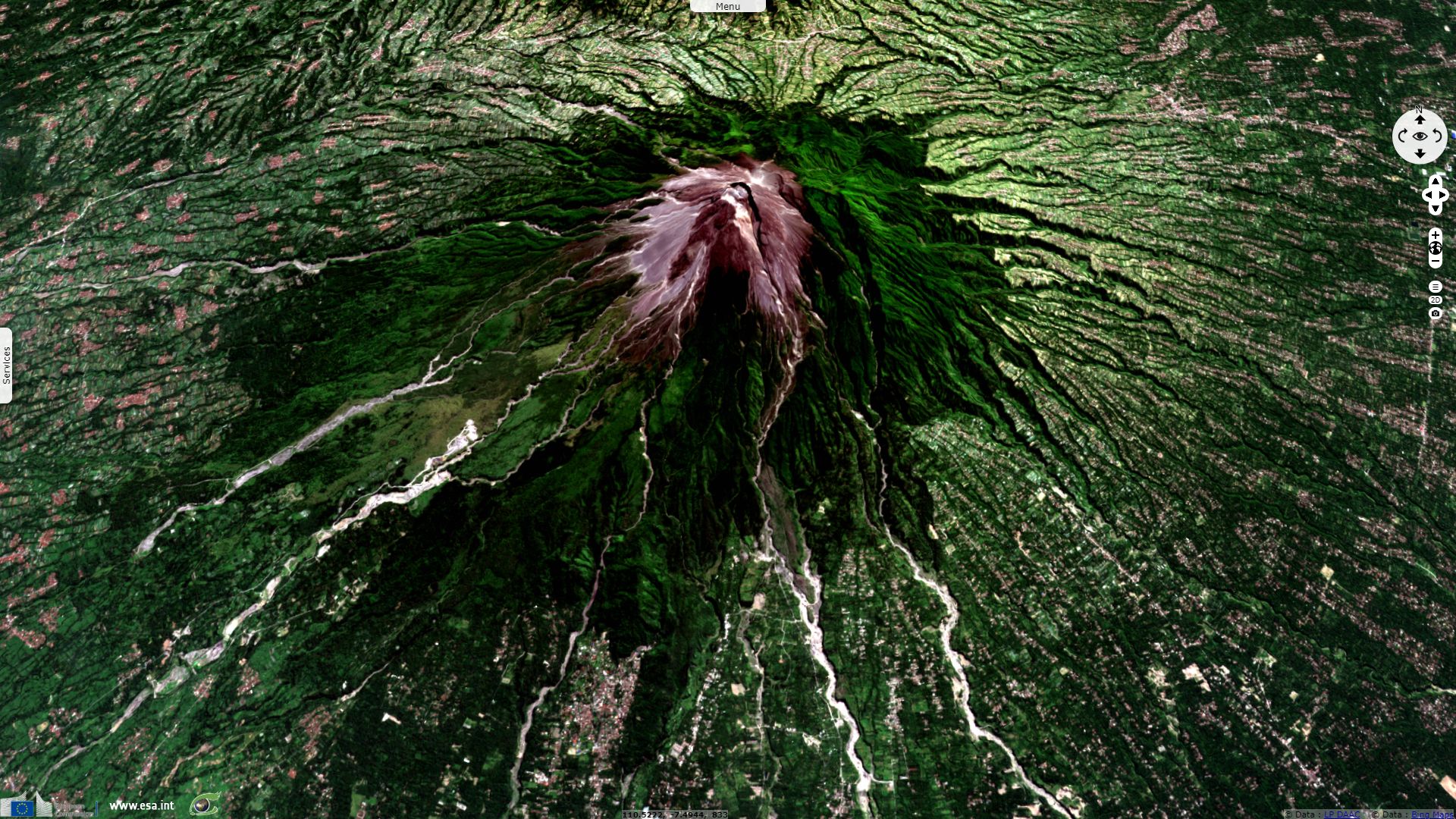 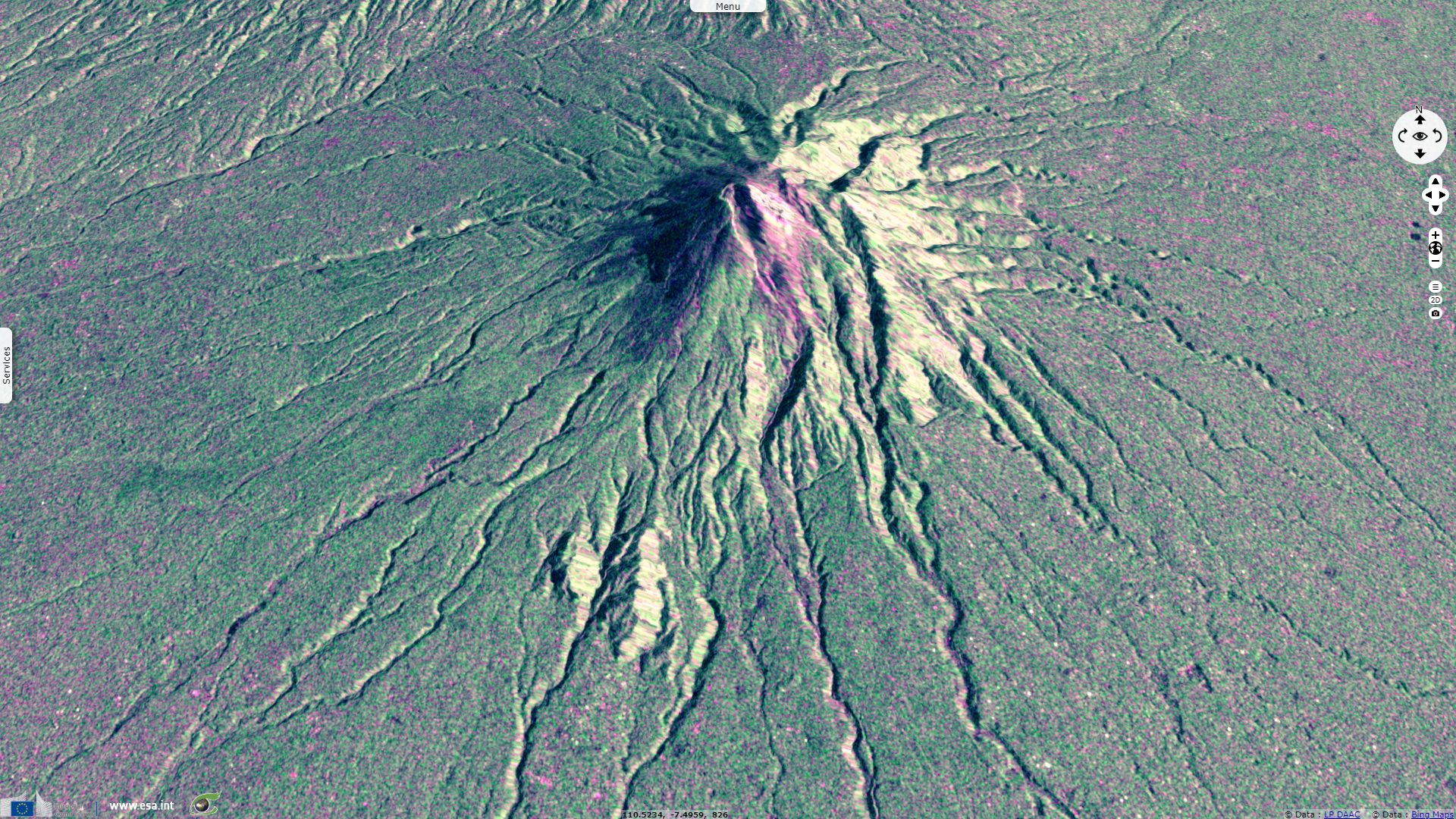