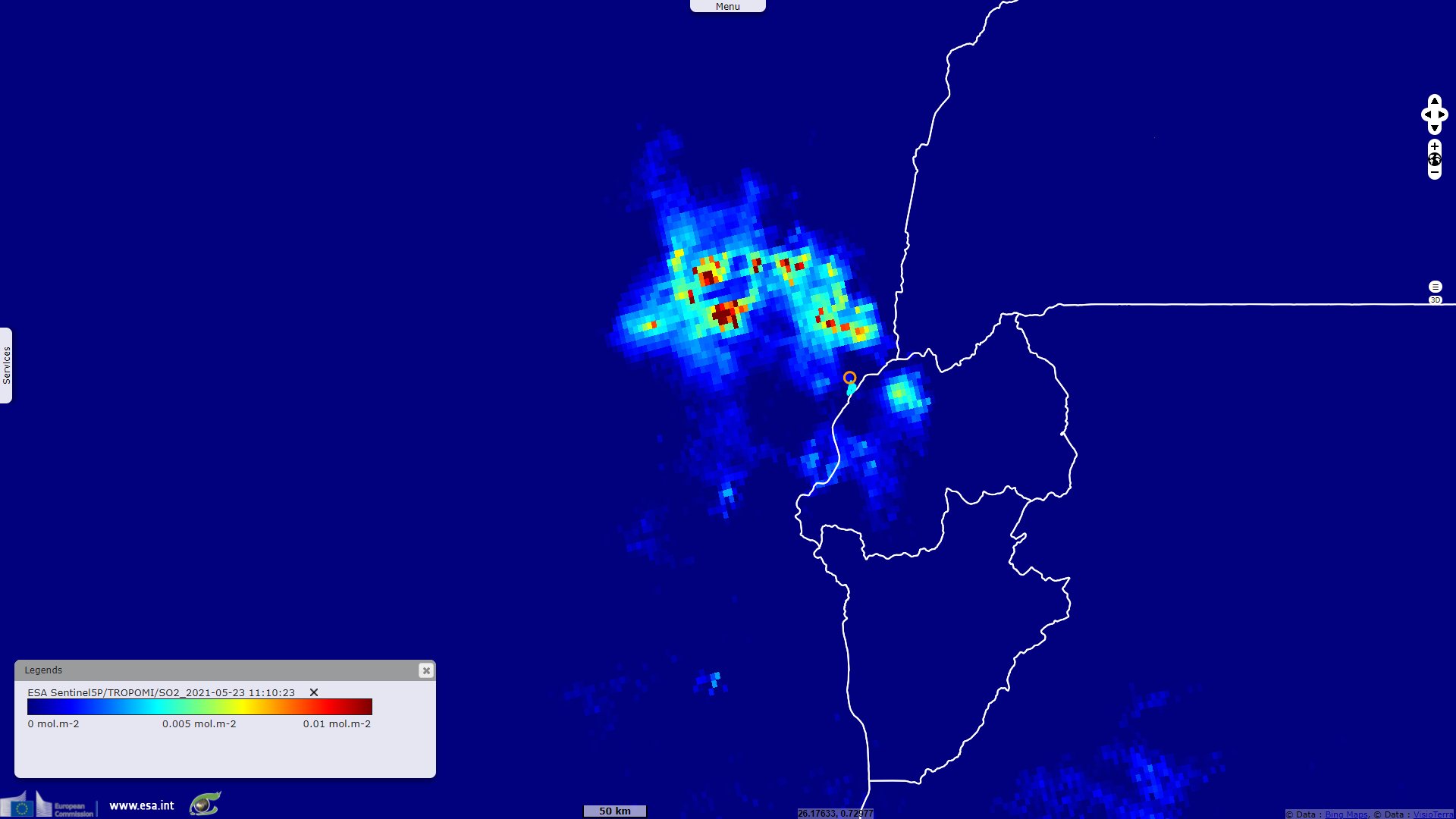 Listed among the decade volcanoes, The Nyiragongo volcano is considered one of the most dangerous in the World. It lies 10 km from Goma and its two millions inhabitants and very close to Lake Kivu and its dissolved gasses. On 22 May 2021, it was reported that the volcano was erupting again. The Smithsonian Institution details: "At around 18:15 on 22 May seismicity at Nyiragongo spiked, around the same time observers reported at least two fissures opening on the lower Southern flanks, North-West of Kibati (8 km South-South-East) and Rukoko (10 km South). Lava from the first fissure, originating near the Shaheru crater, flowed East over a major road (N2) and then South. The second fissure produced lava flows that traveled South, overtaking and setting fire to many houses and structures in communities north of Goma, just West of Monigi (12 km South). Video posted on social media showed lava fountaining from the fissures, a glowing red sky, and residents running through the streets." "According to the Toulouse VAAC ash plumes may have initially rose to 13.7 km above sea level (a.s.l.), though subsequent estimates put the ash plumes mostly at 6.1-9.1 km a.s.l. during 22-23 May. Satellite images and local scientists indicated that the summit lava lake had drained before the flank fissures had opened, but began refilling afterward; collapses in the summit crater were the likely cause of the ash plumes."
Fig. 2 - S2 (01.06.2020) - View of the Nyiragongo and its lava lake above Goma and Lake Kivu. The lake contains enough molten lava to fill 2500 Olympic pools.
3D view

"About 1000 homes and buildings were destroyed and about 25 000 people were displaced. The lava cut off electricity and water supplies to some areas. The flow may have been as wide as 1 km and stopped 1.25 km from the Goma International Airport, in the SE part of the city, during 22-23 May." "Seismic data during 22-24 May showed events seemingly propagating from the summit area to the South into Lake Kivu. Several strong earthquakes shook buildings in Goma, causing some to collapse and injure people; a news article noted that tremor was felt about every 30 minutes beginning around noon on 23 May. Both airports in Goma closed for security reasons. A M 5.1 earthquake with a hypocenter beneath Lake Kivu was recorded at 10:37 on 24 May."
Fig. 3 - S1 (13.05.2021) - Radar view before the new eruption.
3D view 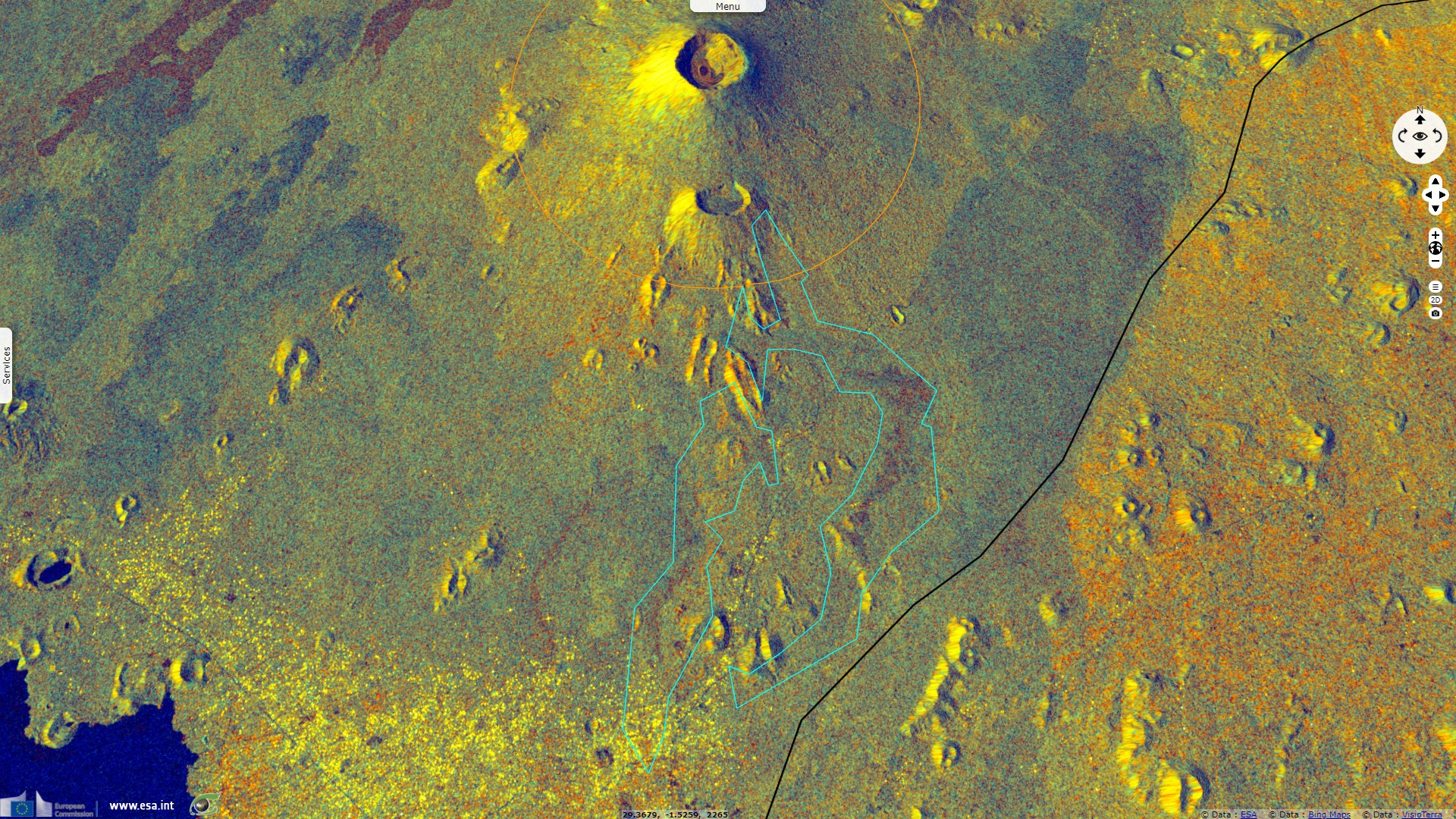 "The VAAC noted that ashfall around the volcano and in surrounding towns was visible in satellite data. Cracks a few 10s of centimeters wide opened in different parts of the city on 25 May. The cracks stretched for several hundred meters from the northern city limit down to the lake, and were nearly 100 m long near the airport. Some cracks were hot and emitting gasses, and some were flaming. Ash plumes rose to 6.1 km a.s.l. and drifted South; ground-based reports indicated ash in the atmosphere above Goma. Seismicity remained intense on 25 May with more than 130 earthquakes between M 2 and M 5 recorded in a 24-hour period. News reports indicated hundreds of damaged buildings in neighboring Rwanda.".
Fig. 4 - S1 (25.05.2021) - View of the new lava flows, some of them reaching Goma.
3D view 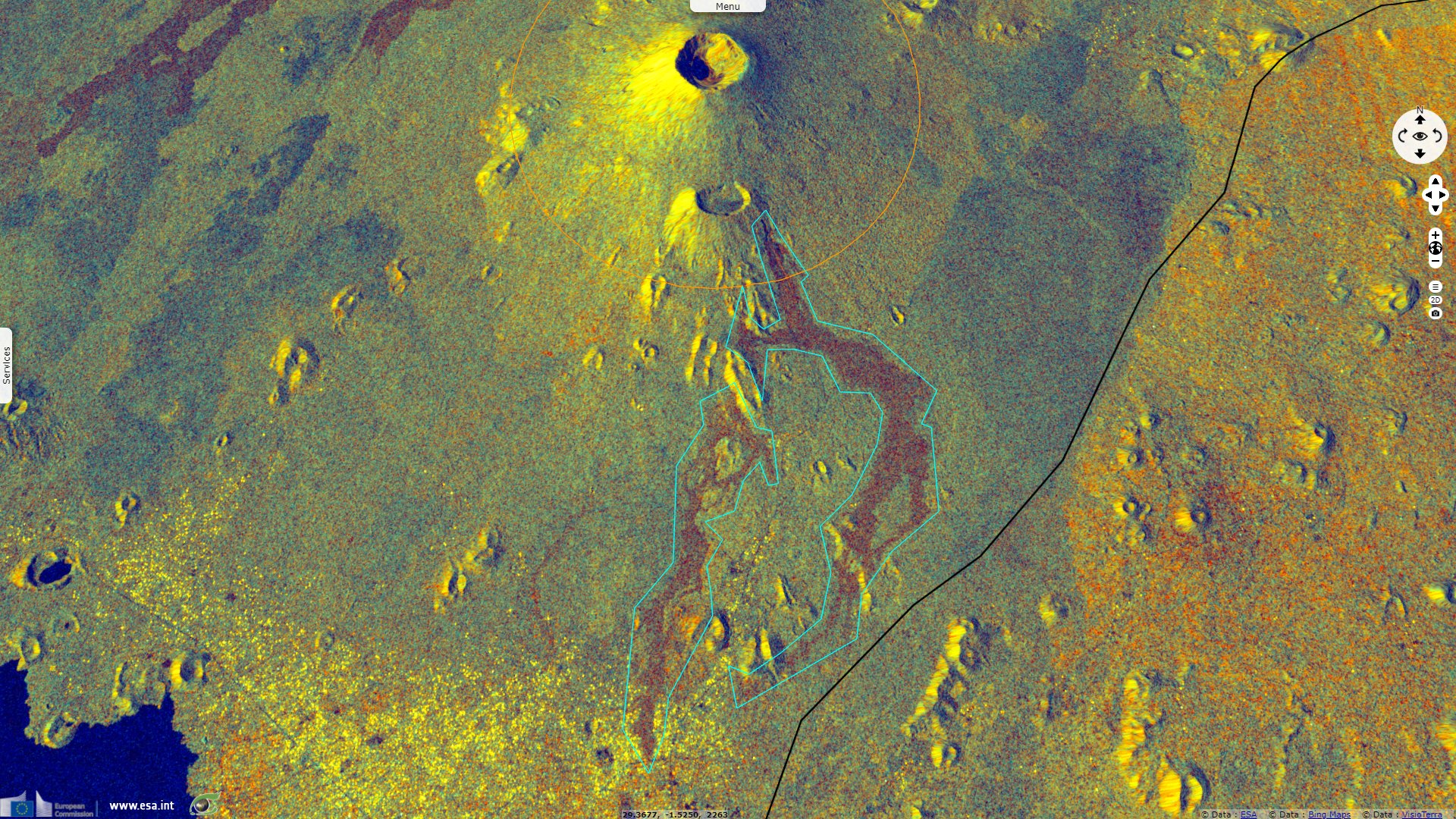 The British Broadcasting Corporation develops on the threats caused by Nyiragongo: "Scientists say underground magma has been flowing toward Lake Kivu since the deadly eruption of the nearby Mount Nyiragongo volcano on Saturday. An eruption from under the lake could trigger the release of a lethal, suffocating cloud of gas, experts fear. A limnic eruption involves the release of dissolved gases that have accumulated at the depths of a lake. Gases such as carbon dioxide (CO2) and methane can seep into lakes through volcanic vents. To trigger the release of these gases from the water, a disturbance of some kind is needed. That disturbance could be an eruption, a landslide, an earthquake or even a small rise in the temperature of the water. This event poses a rare but potentially catastrophic risk to Goma's residents."
Fig. 5 - S1 - green channel: 01 & 13.05.2021, magenta channel: 25.05.2021 - saturated colours show change, such as the lava flow.
3D view 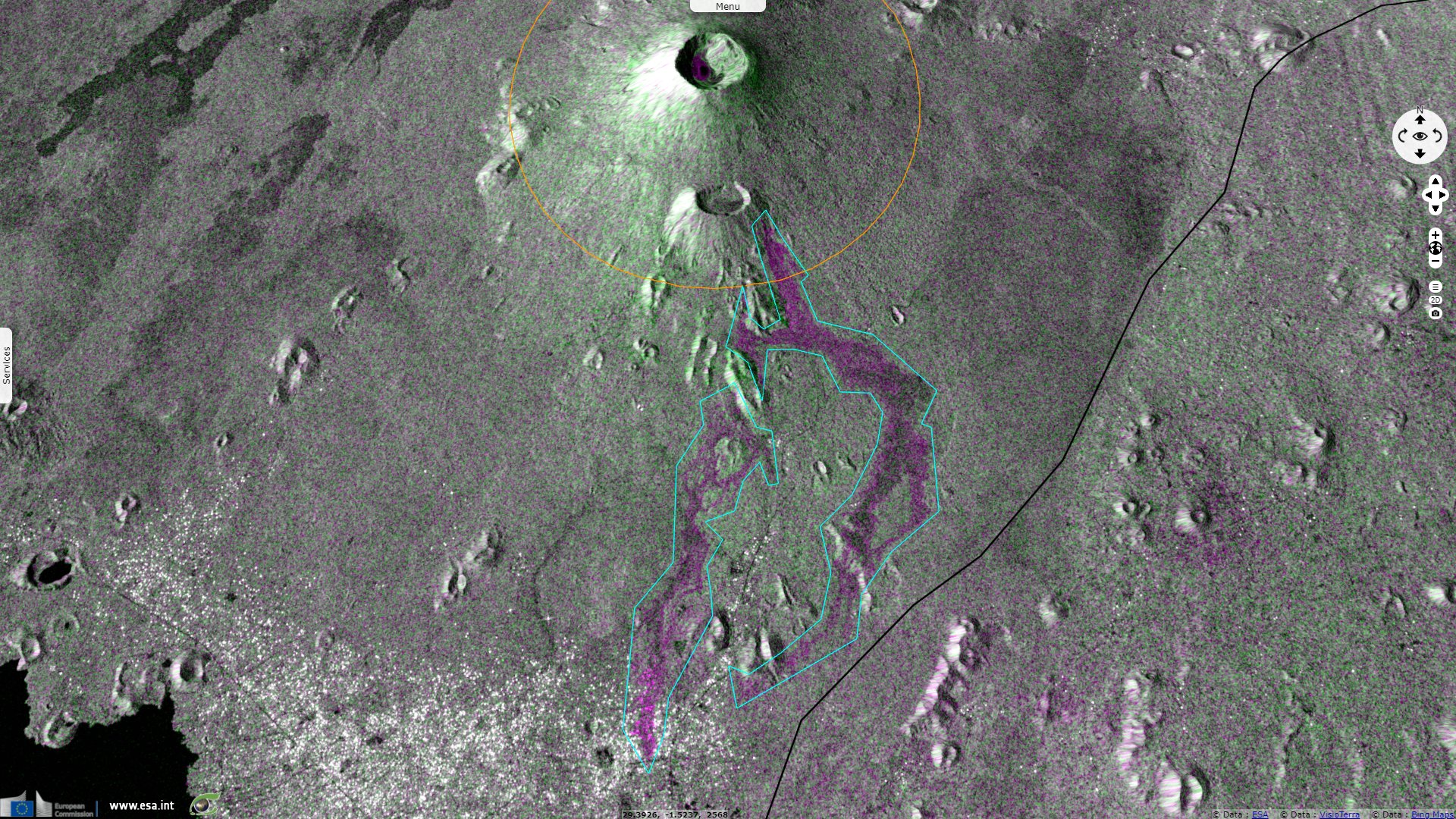 "In theory, the magma could heat up the water, causing the dissolved CO2 to mix rapidly with upper layers of the lake and escape into the air. Consider the opening of a shaken-up fizzy drink as an analogy. When the lid is opened, the pressure is released, allowing the carbon dioxide to escape. High concentrations of CO2 can displace oxygen in the air and affect breathing. Dr Andrews said Lake Kivu is estimated to contain about 300 cubic km of CO2, which is invisible, odourless, and denser than air. If there is less oxygen to breathe in the air, serious and sometimes deadly health effects can ensue." "It has happened before at a lake in Cameroon, with tragic consequences. In 1986, Lake Nyos released dissolved CO2 into the air after a landslide. The cloud of CO2 asphyxiated an estimated 1800 people in nearby villages. The key difference in DR Congo, of course, is the size of the lake and the population centres around it. Measuring about 475m deep, Lake Kivu has more than twice the depth of Nyos, not to mention overall size: 2700 km² for lake Kivu to 1.58 km² for Nyos. 'If there was a big underwater volcanic explosion, it could cause an eruption of all this gas that would flood the urbanised shores of Lake Kivu, which would be an incredibly dangerous thing to happen,' Dr Andrews said."
Fig. 6 - S2 (27.05.2021) - Behind the clouds, lava can be seen spewing from the southern cone.
3D view 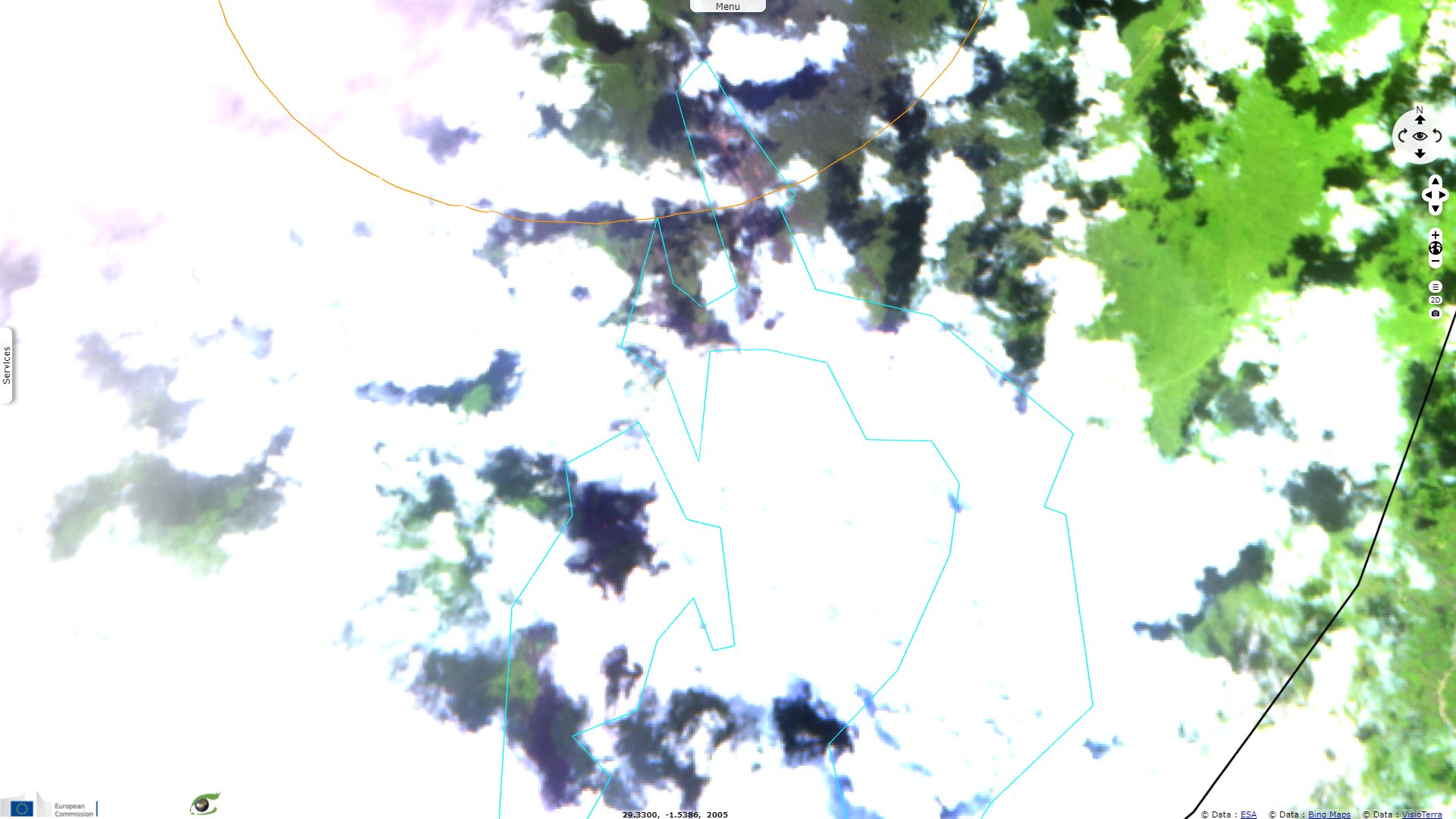 "A second scenario is another eruption at the 3500m-high Mount Nyiragongo - one of the world's most active volcanoes. If that were to happen, the eruption would send renewed lava flows southwards towards Goma, threatening buildings in their path. Even though the volcano is 10 km from Goma, lava 'can move as fast as a speeding car so it's very difficult to outrun', Dr Andrews said."
Fig. 7 - L7 (24.05.2021) - Optical view of the hot lava flow hitting Goma.
2D view 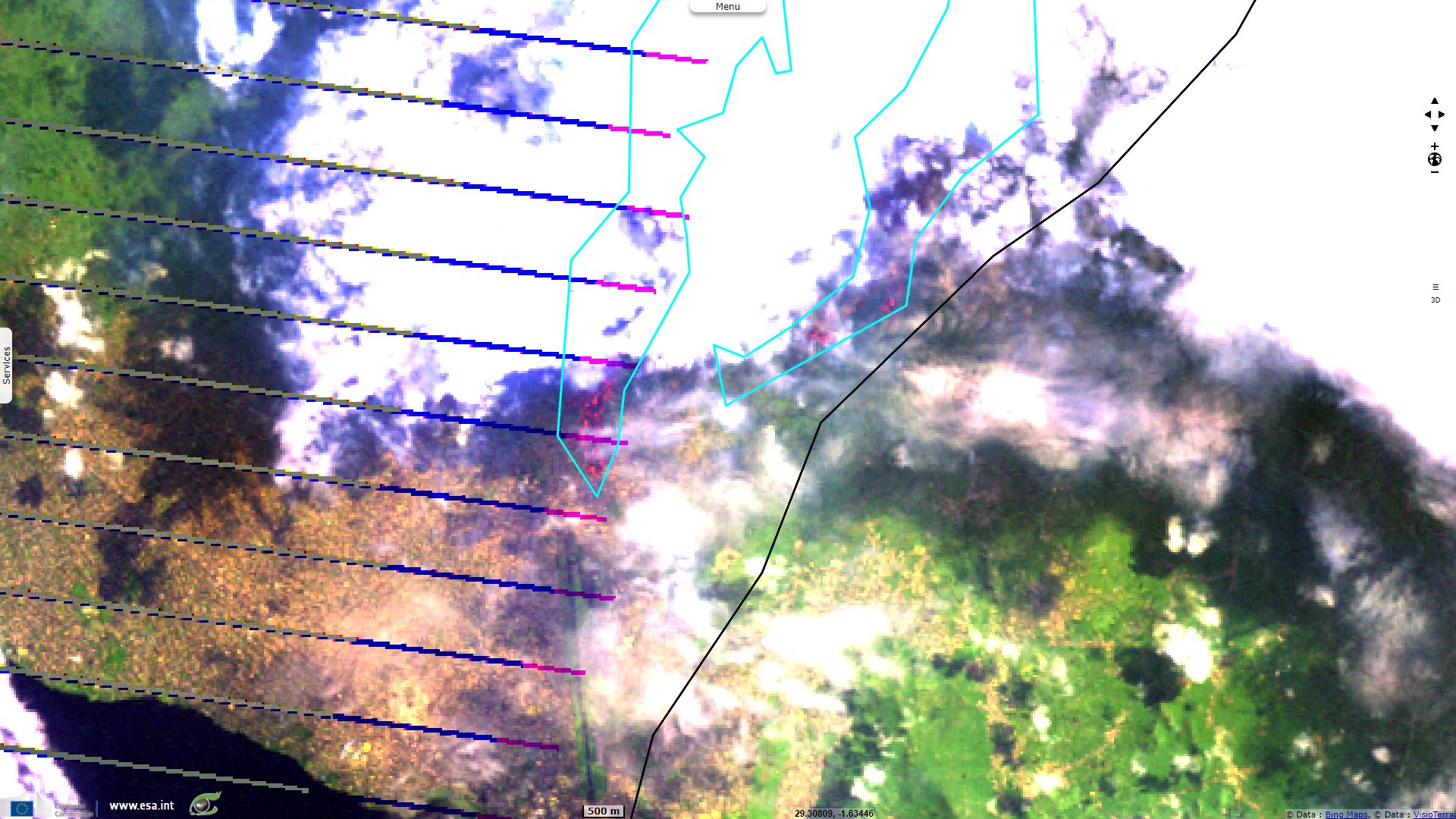 "The possible release of methane from the lake brings a third scenario into play as well. There is a risk that methane can ignite, if it is released in high enough concentrations. For this reason, Jan Egeland, secretary general of the Norwegian Refugee Council, said it was not safe to be in Goma anymore. 'Lake Kivu is unsafe because there are vast quantities of methane gas trapped on the bottom of Lake Kivu and that could be released by the volcano and the constant earthquakes which were there all the time,' Mr Egeland told the BBC on Thursday." 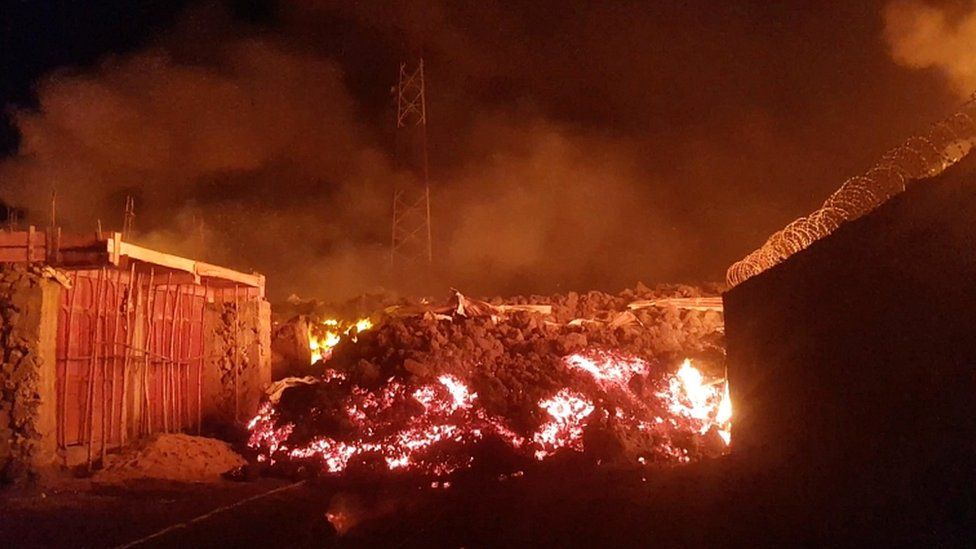 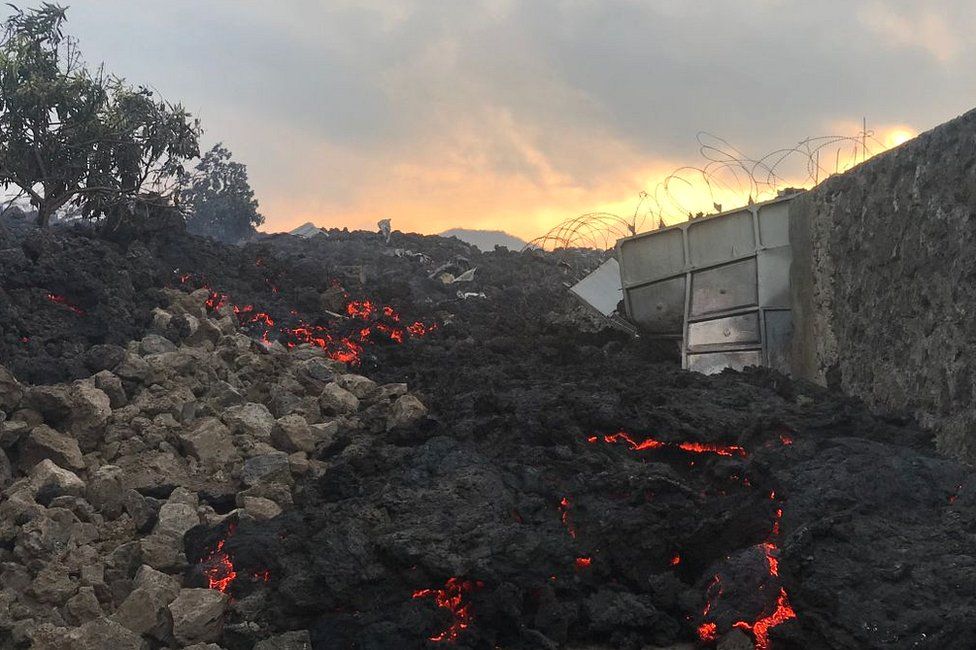 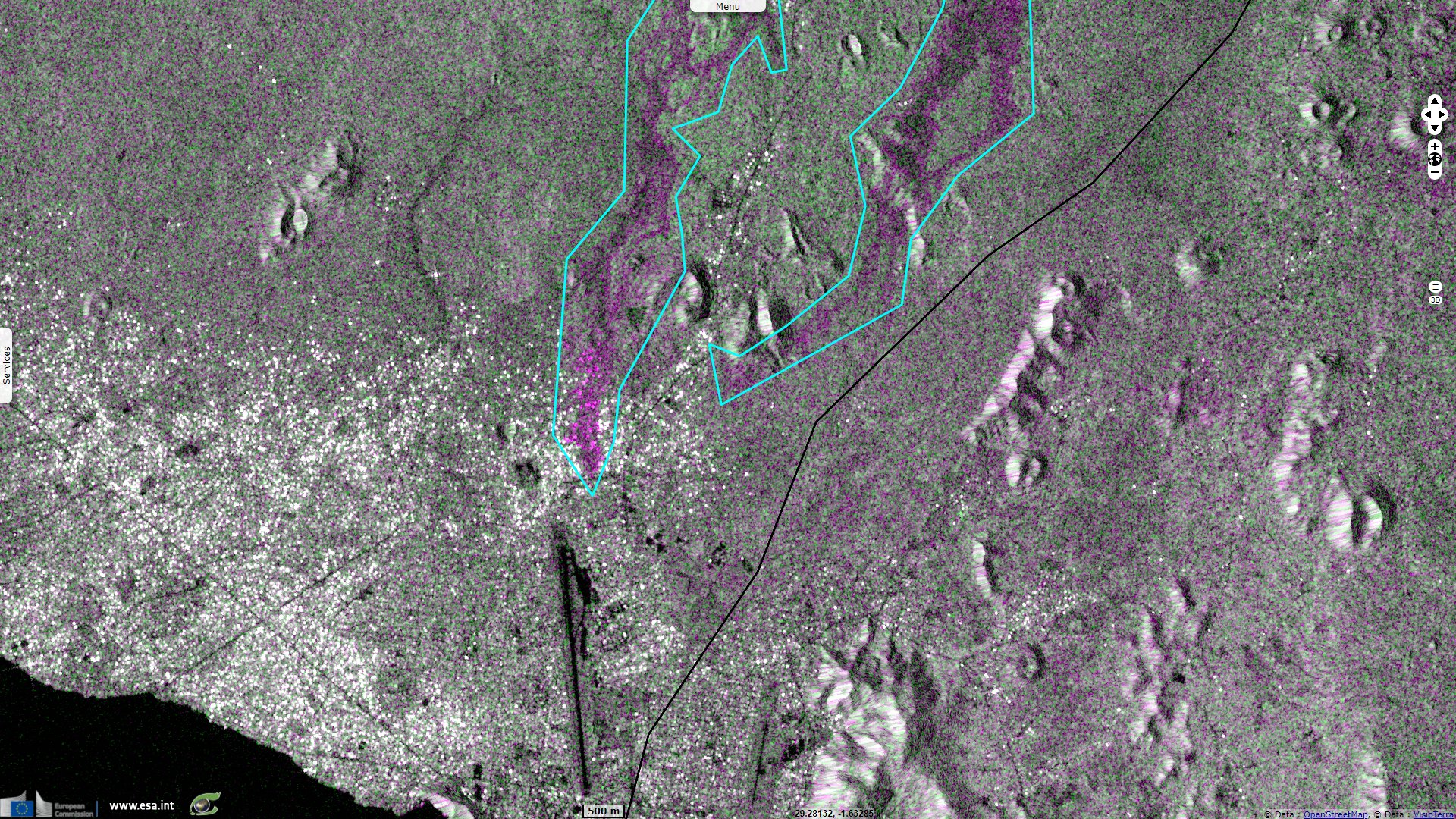 According to the BBC, initial reports indicated that about 32 people had died according to the United Nations (UN): about 12 from lava and gas asphyxiation while crossing lava flows, and most of the rest from accidents while fleeing. It alse left thousands homeless. The UN's children's agency, Unicef, also said it had rescued 530 missing children separated from their parents during the eruption. The BBC's Emery Makumeno in DR Congo's capital Kinshasa said a greater quantity of the lava took the direction of the forest, flowing away from the city. Volcanologist Dario Tedesco says that the situation could have been made even worse had more lava come out. The volcano last erupted in 2002, killing 250 people and making 120 000 homeless. Its deadliest surge happened in 1977, when more than 600 people died. Mount Nyiragongo is one of the world's more active volcanoes but there were concerns that its activity had not been properly observed by the Goma Volcano Observatory, since the World Bank cut funding amid allegations of corruption. 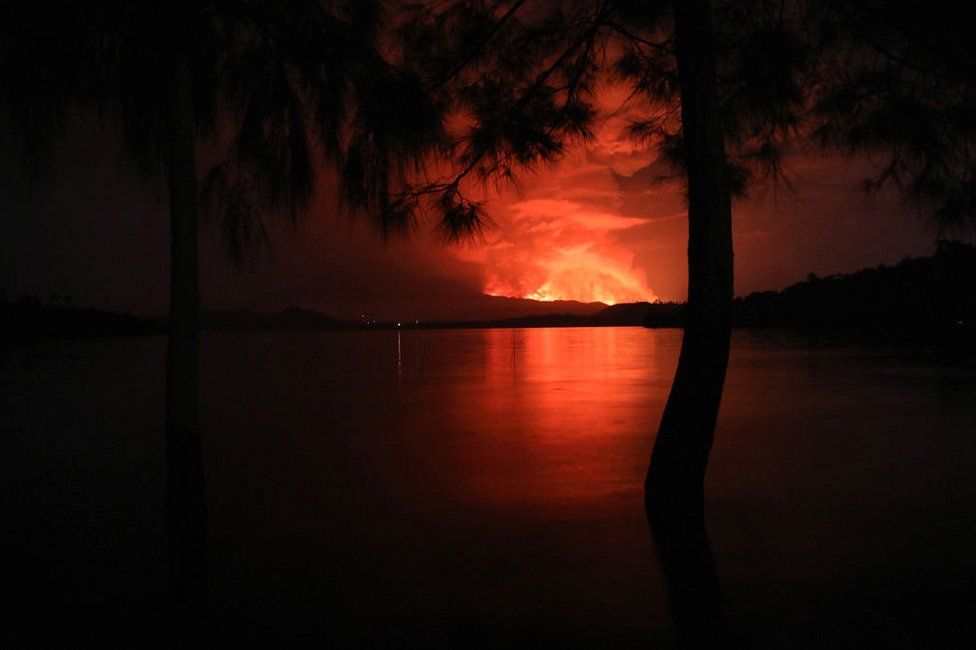 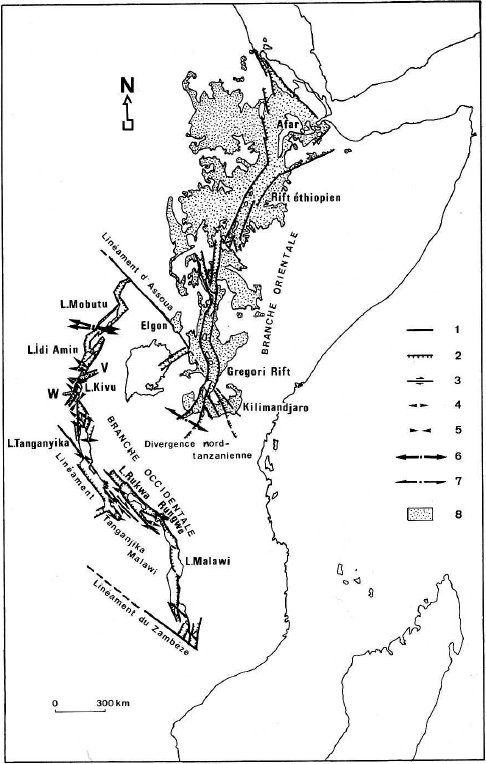 Structural sketch of the East African Rift, including NW-SE transform zones due to reactivation of Precambrian lineaments; 1: fault, 2: normal fault, 3: transcurrent fault, 4: direction of extension, 5: direction of compression, 6 & 7: from earthquake local mechanisms, extension (6), strike slip (7), 8: Cenozoic volcanism, V: Virunga trough and volcanic chain, W: Walungu trough - Source: Jean Chorowicz
Active without interruption since 2002, Nyiragongo is located between the Virunga volcanic massif and Lake Kivu, on the western branch of the Great East African Rift. It is intended to separate the African plate from the Somali plate before becoming an oceanic ridge as described by Professor Jean Chorowicz, emeritus Professor at Sorbonne University in his article The East African Rift: the beginning of the opening of an ocean ?. He proposes a model for the opening of the East African rift "as a result of the separation, in a relative NW-SE direction, of two blocks, Somalian at east, African at west. The break-up of the East African continent appears to progress from north to south, along a broken line including of course the chains of the main N-S to NE-SW troughs, in a slightly strike-slip opening, but also the strike-slip NW-SE oriented transform zones." "The major faults form a main fault line that represents the boundary between the two blocks. If the relative NW-SE divergent motion, which appears to be the result of global plate movements, continues, there is no reason why this divergence cannot result in the opening of an ocean. In this hypothesis, the ocean can be expected to appear along the main rupture line. The trenches bordered by this main line would therefore have an oceanic fate. On the other hand, all the other trenches, located outside of this rupture line, parallel or oblique to it, should be destined to fail." "The impression is that the East African Rift is progressively opening in a scissors fashion from north to south and that, if this evolution continues, it is moving towards an oceanic opening. A scissors opening necessarily implies that the rate of extension is higher in the north than in the south (Kampuzu et al., 1983) and vice versa. The precise location of the volcanic emission points coincides with at least two types of structure: tensional slots, as is well known in the Afar (and Gregory Rift: Tiercelin, 1981), or tensional megafaults forming small troughs, an example of which can be taken from the Virunga chain (Nyiragongo, Nyamulagira...) set on a NE-SW trough (Chorowicz and Mukonki, 1980)." The volcanism of Mount Nyiragongo is just one of the consequences of this slow process.
The views expressed herein can in no way be taken to reflect the official opinion of the European Space Agency or the European Union.
Contains modified Copernicus Sentinel data 2021, processed by VisioTerra.