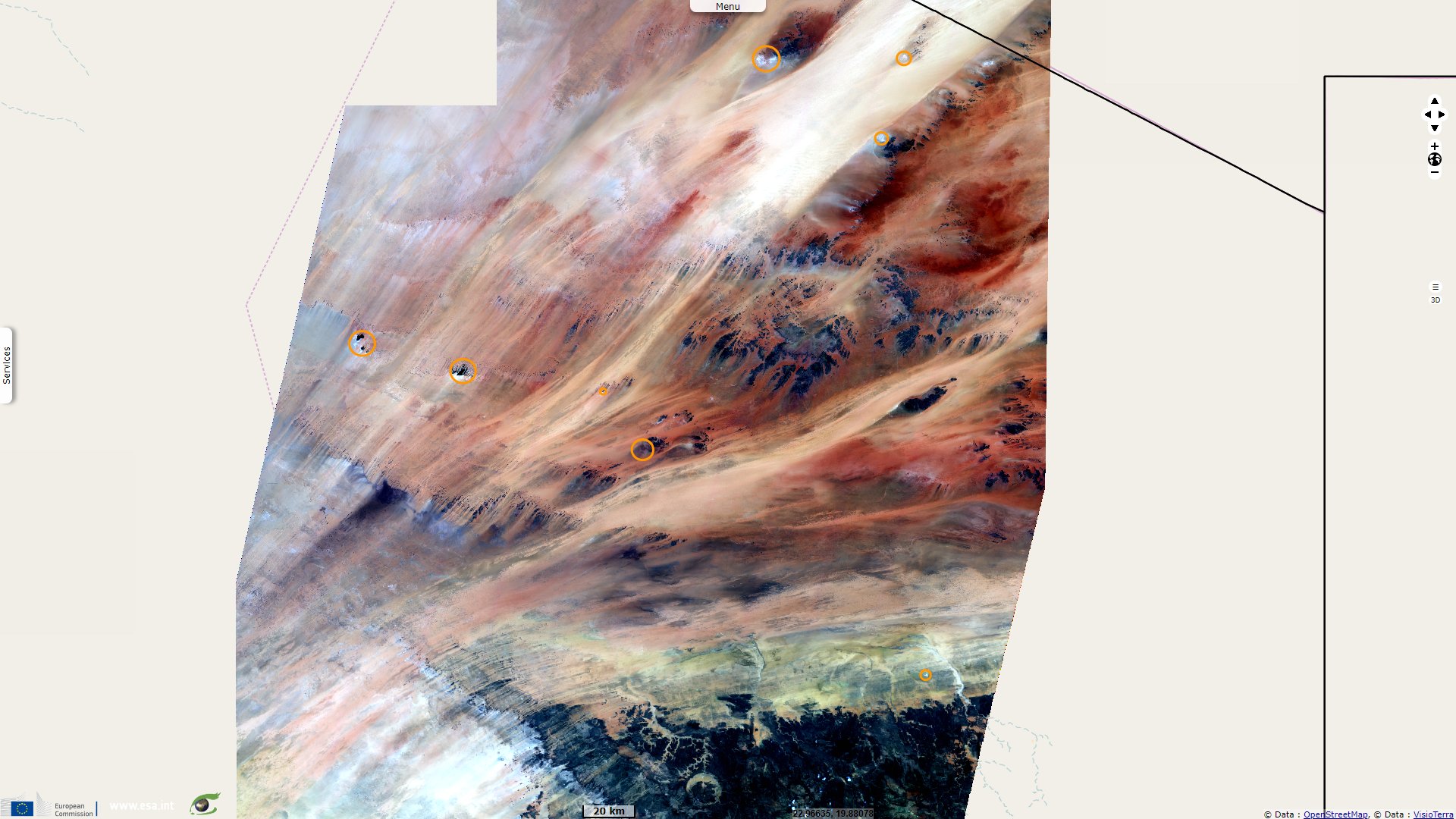 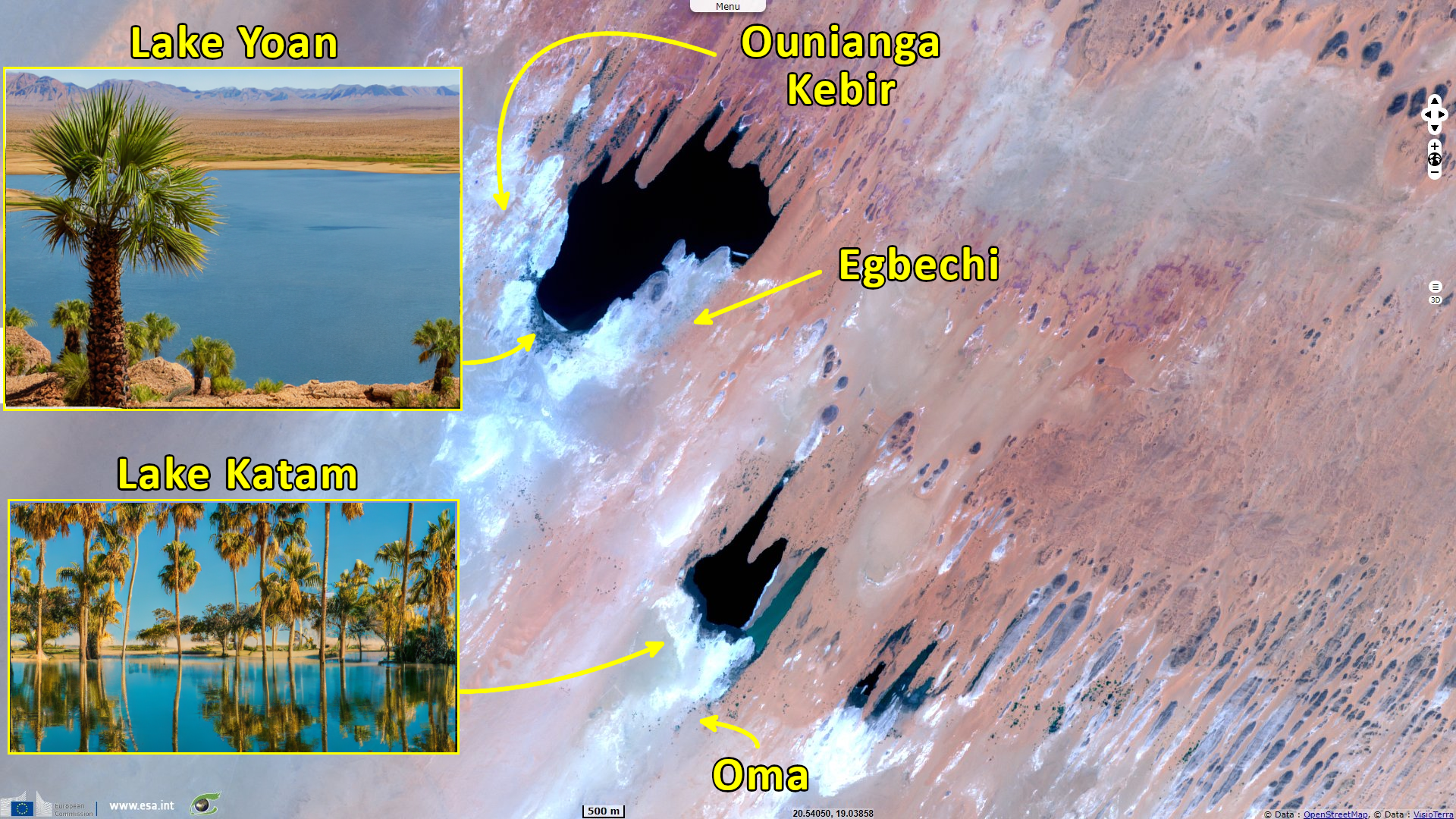 The lakes of Ounianga are the remnant of a much larger lake, that filled the basin during the so-called green Sahara-time, which lasted from about BC 10000–1500. Today, these permanent lakes are a UNESCO World Heritage site which "includes eighteen interconnected lakes in the hyper arid Ennedi region of the Sahara desert covering an area of 62 808 ha. It constitutes an exceptional natural landscape of great beauty with striking colours and shapes. The saline, hyper saline and freshwater lakes are supplied by groundwater and are found in two groups 40 km apart."
Fig. 3 - S2 (22.04.2021) - Lake Yoan is the largest of these lakes. Lake Katam is made of two lakes with different colour.
2D view 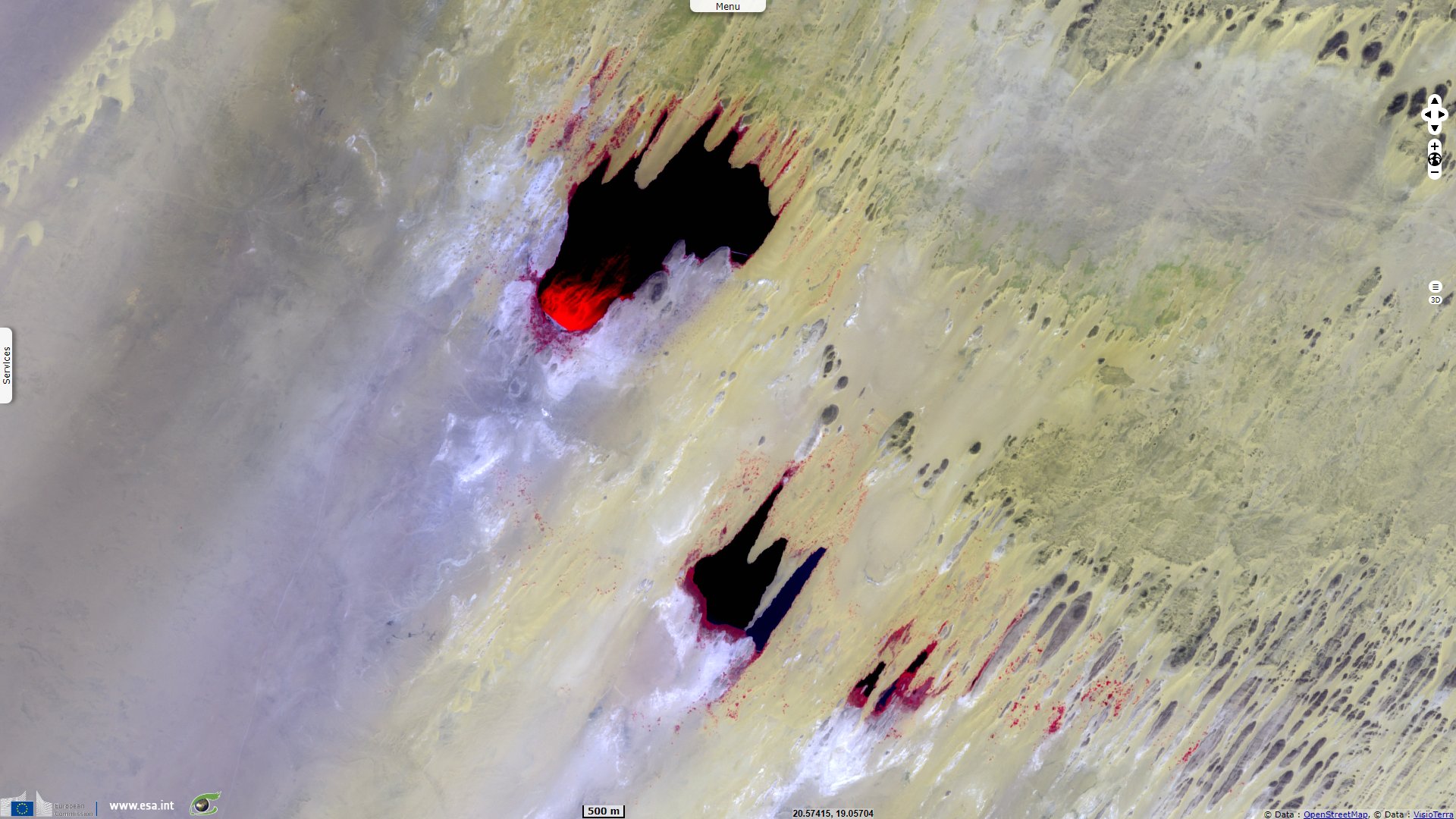 "Ounianga Kebir comprises four lakes, the largest of which, Yoan, covers an area of 358 ha and is 27 m deep. Its highly saline waters only sustain algae and some microorganisms. The second group, Ounianga Serir, comprises fourteen lakes separated by sand dunes. Floating reeds cover almost half the surface of these lakes reducing evaporation. At 436 ha, Lake Teli has the largest surface area but is less than 10 m deep. With their high quality freshwater, some of these lakes are home to aquatic fauna, particularly fish."
Fig. 4 - S2 (10.08.2021) - The second group near Ounianga Serir show the same NNE-SSW alignment.
2D view 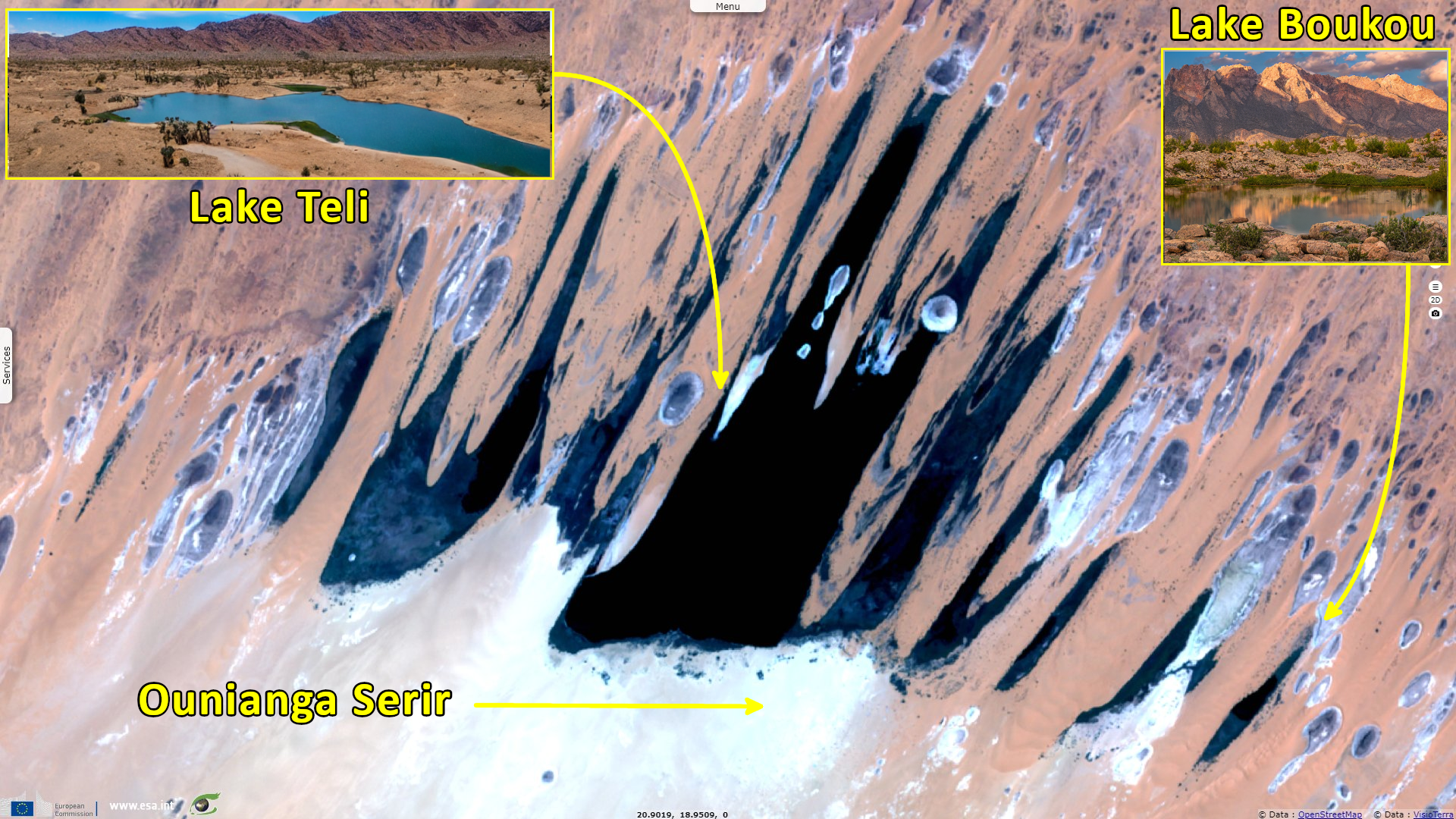 "Located in North-Eastern Chad, in a hot and hyperarid desert setting with less than 2mm rainfall per year, the Lakes of Ounianga comprises a total of 18 lakes, in two groups, displaying a variety of sizes, depths, colorations and chemical compositions. The property covers 62 808 ha and has a 4869 ha buffer zone. The Lakes of Ounianga property is located in a basin which, less than 10 000 years ago, was occupied by a much larger lake and has a globally unique hydrological system, sustaining the largest permanent freshwater lakes system in the heart of a hyperarid environment."
Fig. 5 - S2 (22.04.2021) - Vegetation borders all these lakes, benefiting from this source of surface water.
2D view 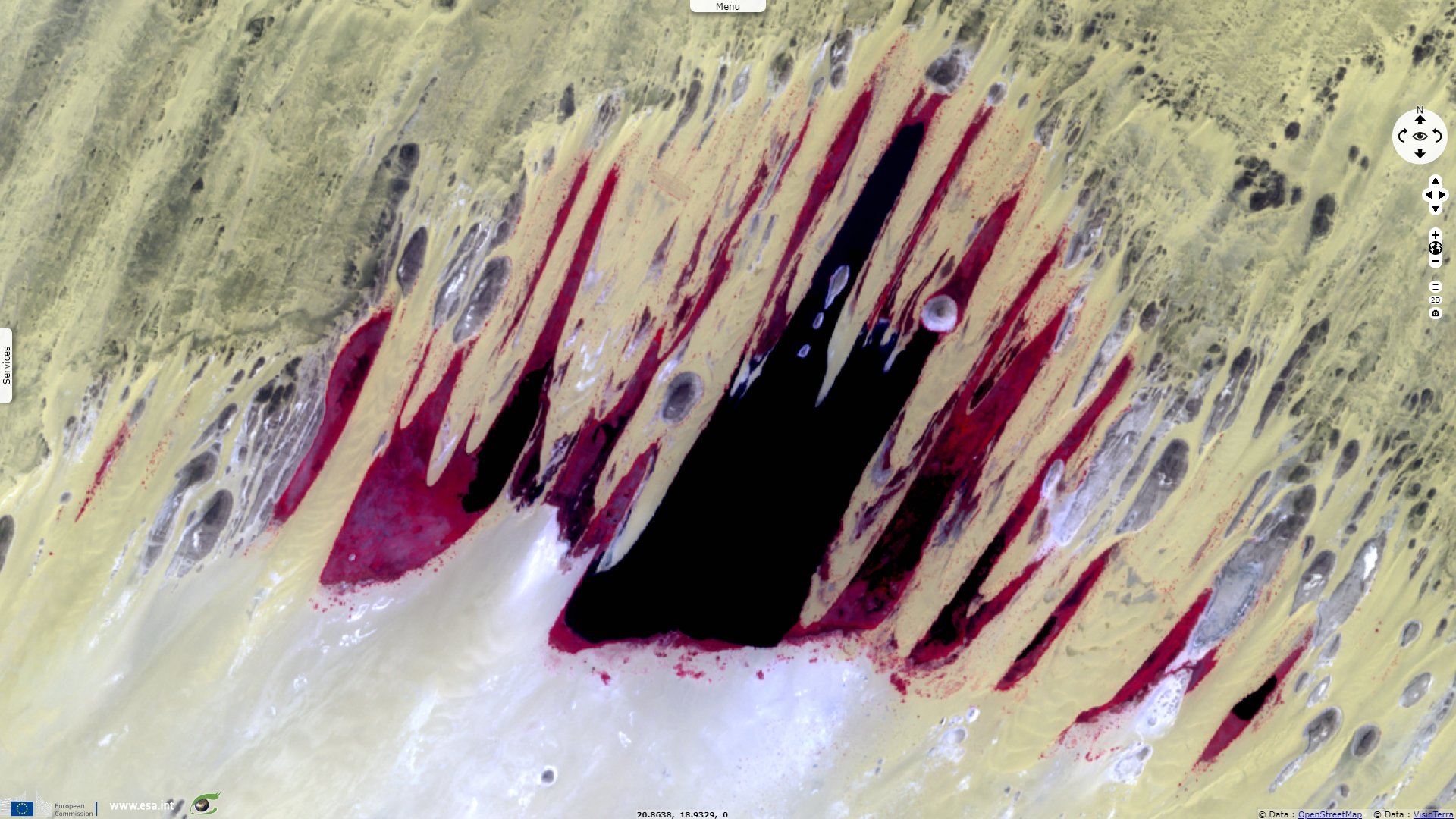 "The property also displays a range of striking aesthetic features, with varied coloration associated with the different lakes and their vegetation, and the presence of dramatic natural desert landforms that all contribute to the exceptional natural beauty of the landscape of the property. The shape and distribution of the lakes, combined with the effect of the wind moving the floating vegetation in the lakes, gives the impression of 'waves of water flowing in the desert'."
Fig. 6 - S2 (10.08.2021) - Ntegdei is located next to a permanent pond. Saline deposits also border this lake further south-east.
2D view 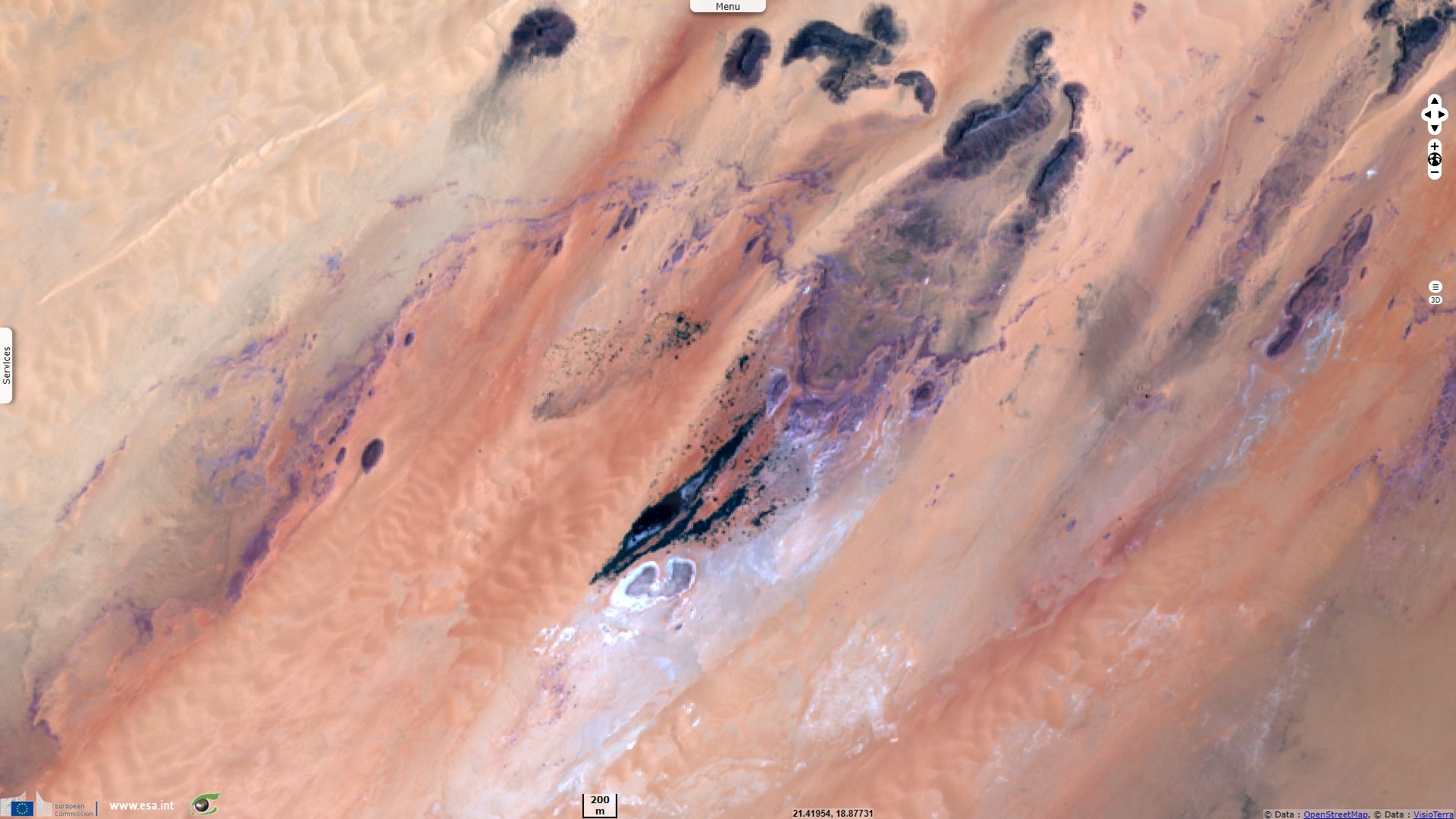 Marie-José Tubiana wrote an article for CNRS-INALCO that translates as The lakes of Ounianga and the Ounia people: The lakes of Ounianga, in reality a series of lakes, ponds and swamps, are grouped in two sets mentioned on the maps under the names of Ounianga Kebir and Ounianga Seghr / Serir, about 60 km apart. They are located below the 19° parallel, in the southern Sahara, between the Tibesti and Ennedi massifs, on the road that leads from Ouaddai to the oases of Koufra and as far as Benghazi (Libya). More broadly, they should be situated between the Chad and Nile basins.
Fig. 7 - S2 (10.08.2021) - The village of Demi lies next to a pond located between the Ennedi Highlands and the Lakes of Ounianga.
2D view 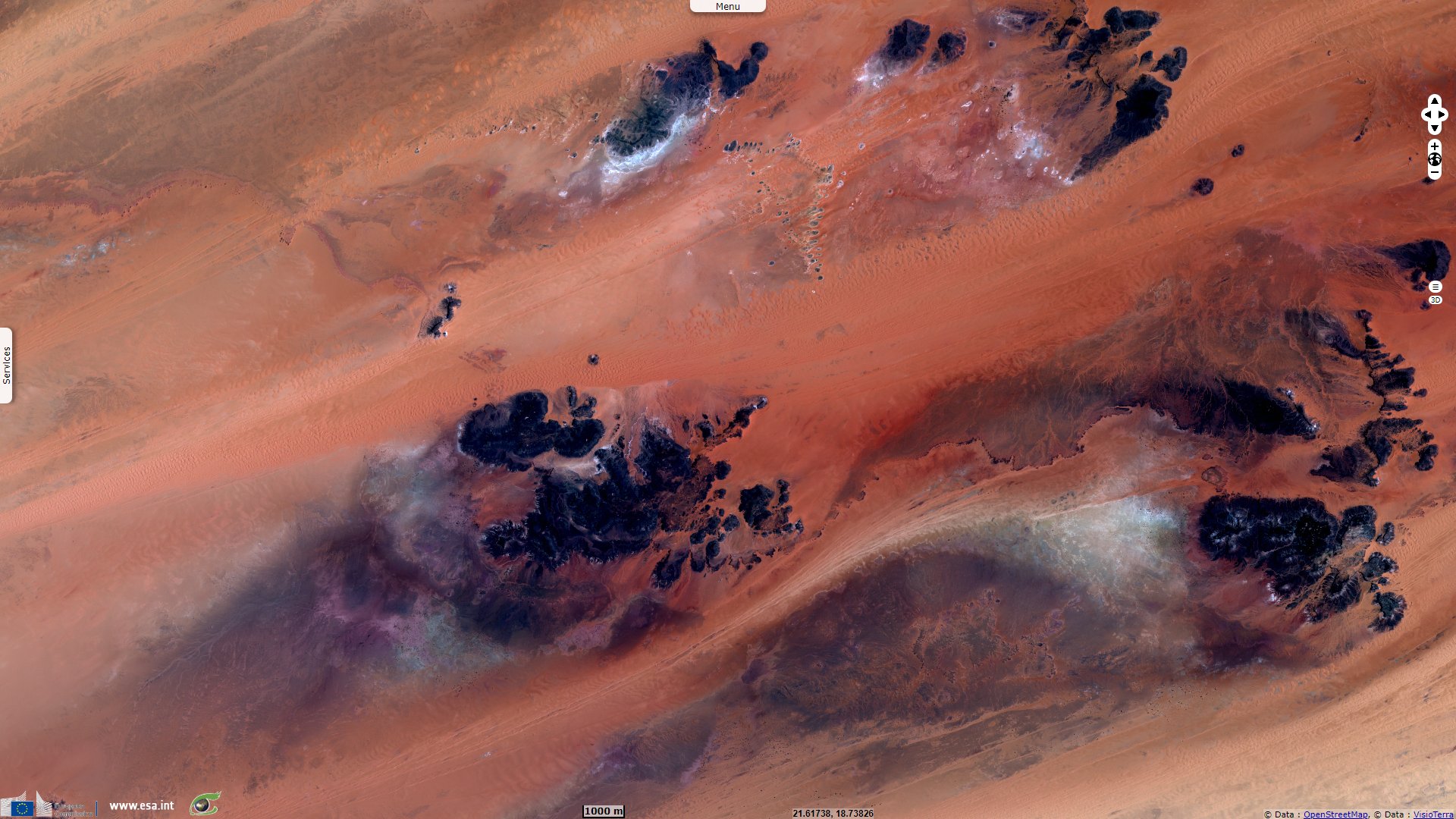 The climatic data collected indicate a hyper-aridity, due to the weakness of the precipitations, always lower than 25 mm with sometimes several consecutive years without any precipitation, an extraordinary intensity of evaporation (evaluated by DUBJEF in 1953 at 7800 mm per annum), a very strong thermal amplitude (the difference between the average of the maxima of the hottest month (May) and the average of the minima of the coldest month (January) is higher than 30° and the extreme amplitude reaches 47° (CAPOT-REY 1961: 29). A north-easterly wind blows seven months a year.
Fig. 8 - S2 (10.08.2021) - The surface water of the oueds located in north-west Ennedi plateau do not flow year-long.
2D view 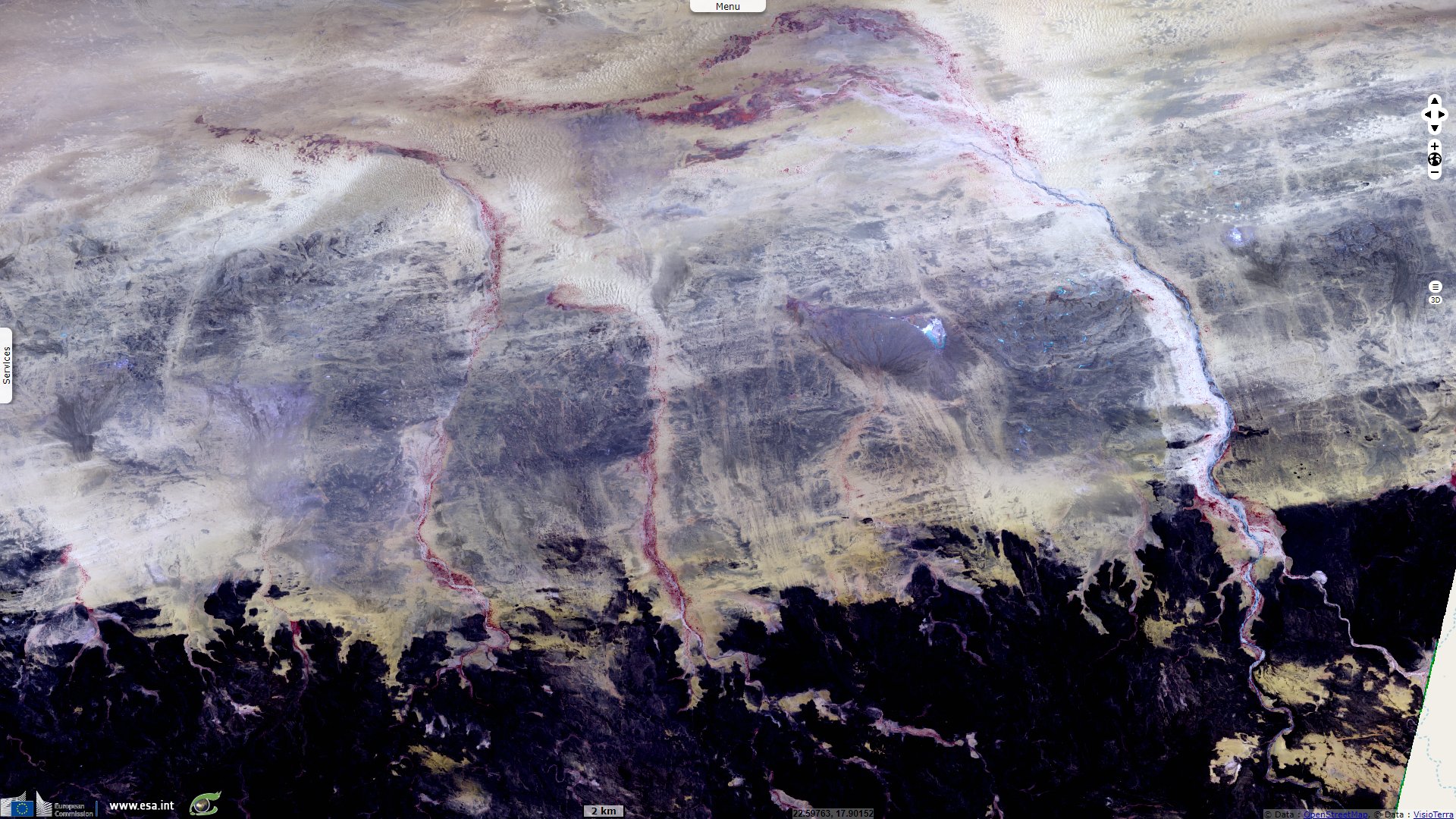 In this desert area, in the middle of immense and bare regs, water is present in the form of in the form of magnificent lakes, blue or green, calm or agitated by short waves of white foam. Lake Yoan in Ounianga Kebir covers 3.7 km² and is over 20 metres deep; Lake Elimé in Ounianga seglllr covers 4.2 km², to mention only the main ones. The waters of both are heavily natronised and contain no life. While the water in the ponds on either side of Elimé are fresh or brackish and contain fish.
Fig. 9 - S2 (10.08.2021) - N-E of the Ennedi plateau. These oueds flow in their general direction but do not reach the lakes of Ounianga.
2D view 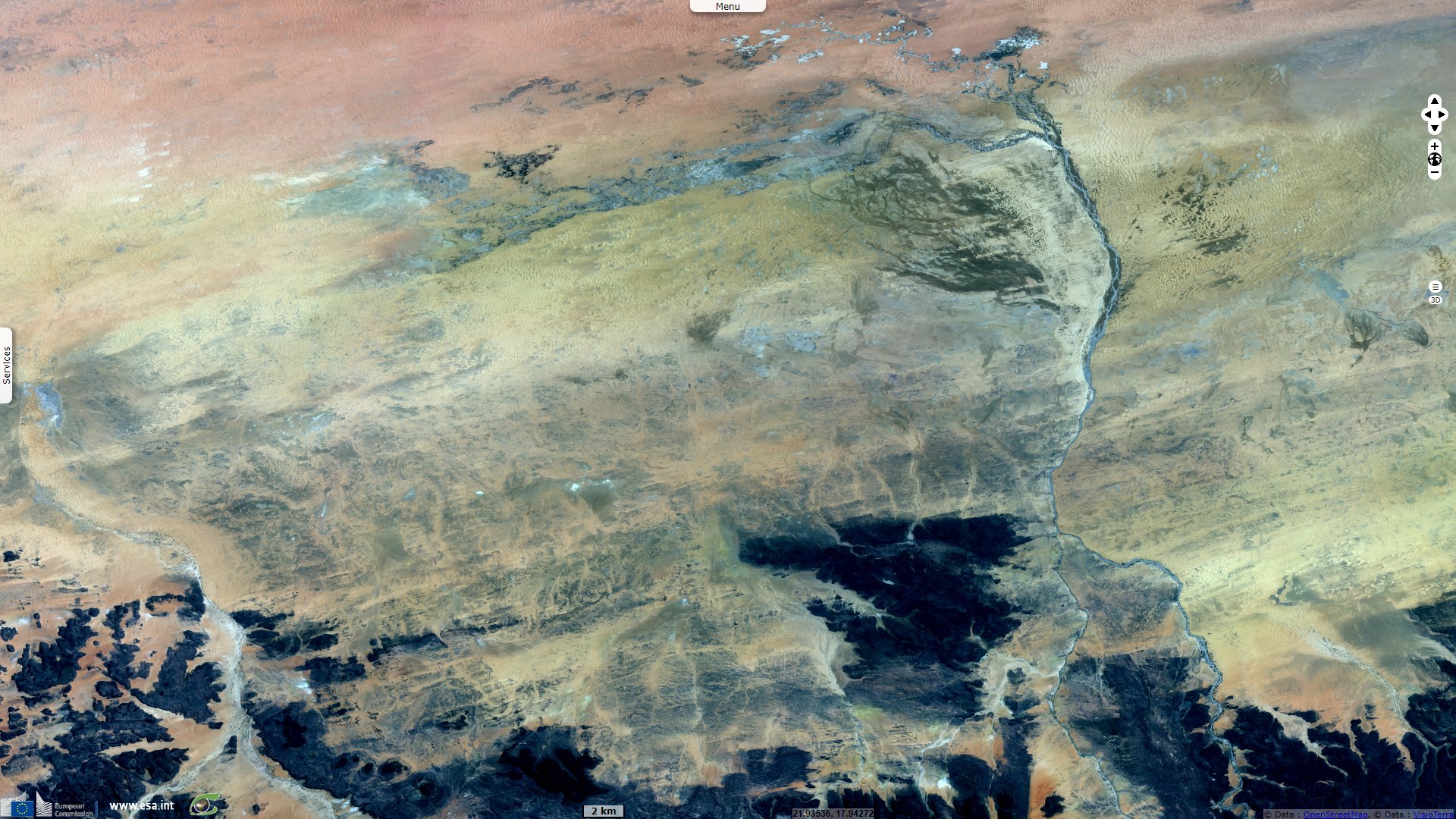 Water is also present in the form of springs, which rise from the foot of the cliffs or dunes that border the lakes. It is this near-surface water that allows the palm groves that surround the lakes to flourish, the villagers to get water and to water small gardens grown under the palm trees. Swing wells located in each garden provide water at a depth of one or two metres. The ounianga region has the triple characteristic of having open water surfaces, water in the subsoil at a shallow depth and deep water as revealed by boreholes. The Ounia who live in this region share their time between palm groves and gardens, salt pans and pastures.
Fig. 10 - S2 (10.08.2021) - Ephemeral river and ponds after rainfalls.
2D view 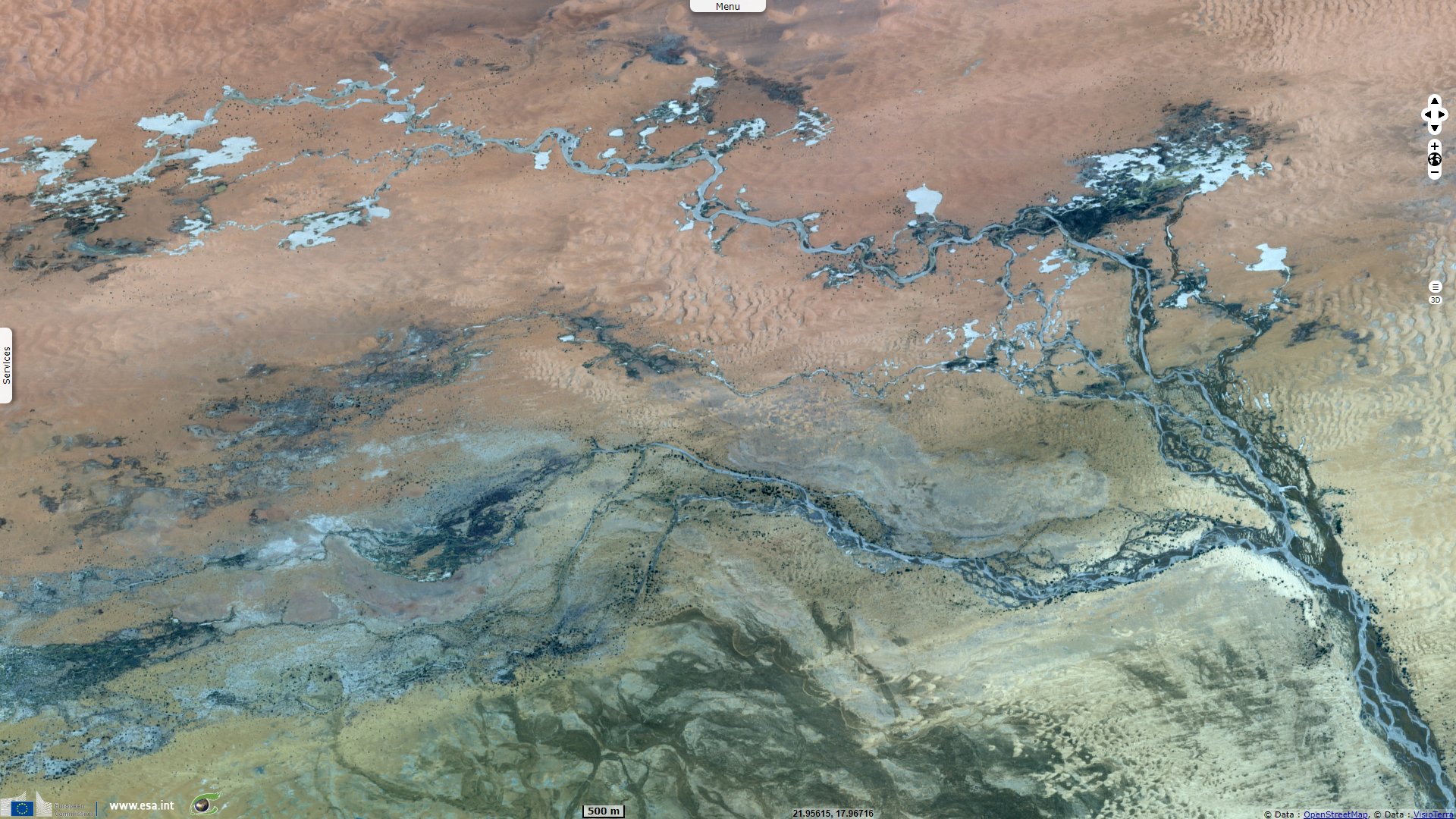 In his article Pastoralist appropriation of landscape by means of rock art in Ennedi Highlands, Chad, Tilman Lenssen-Erz explains the origin of the Ounianga Lakes: "Significant detailed investigations relating to the climatic development in the Holocene were also part of the ACACIA research, based on coring of lake sediments in the Ounianga Lakes 250 km northwest of the highlands. Preliminary results can be summarised as follows (Kröpelin et al. 2008) while bearing in mind that due to the Ennedi’s location somewhat further south the timing and absolute figures of the climatic conditions may vary systematically from the core results: "
The views expressed herein can in no way be taken to reflect the official opinion of the European Space Agency or the European Union.
Contains modified Copernicus Sentinel data 2023, processed by VisioTerra.